We took it easy today. After lunch we walked the 1 km long Willingdon Beach Trail that starts in front of the campground.

First we checked out the public beach just south of us. We haven’t seen an actual sandy beach in quite a while. 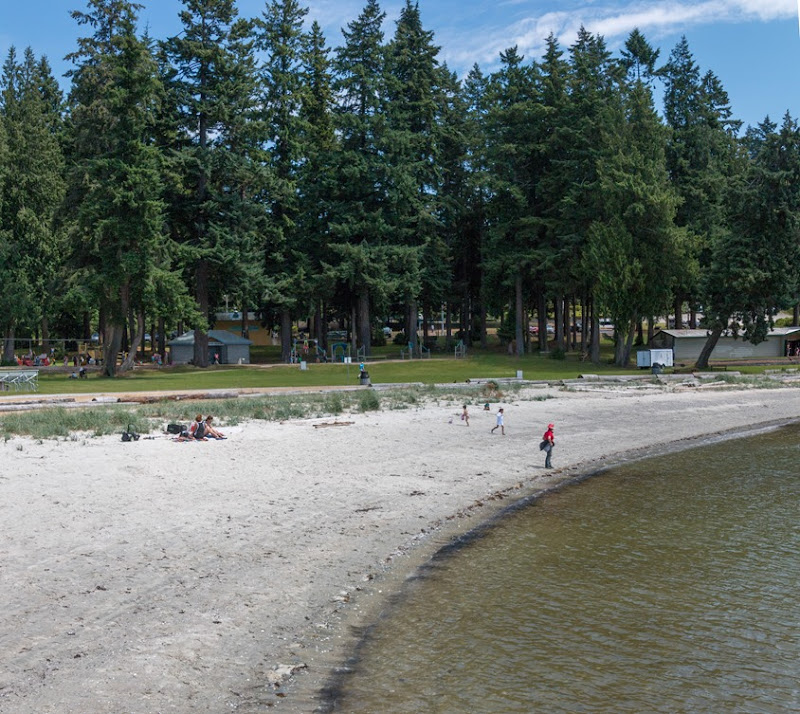 This little tug was hauling a huge log boom. We saw it all afternoon and it hardly seemed to be making any progress, We thought maybe it was stopped, waiting. It did move and the tug changed position but to the eye it was getting closer and closer to shore. 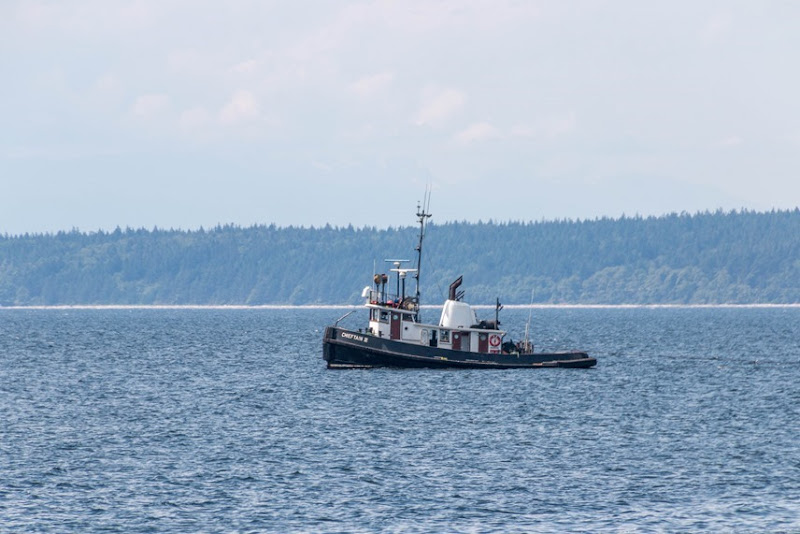 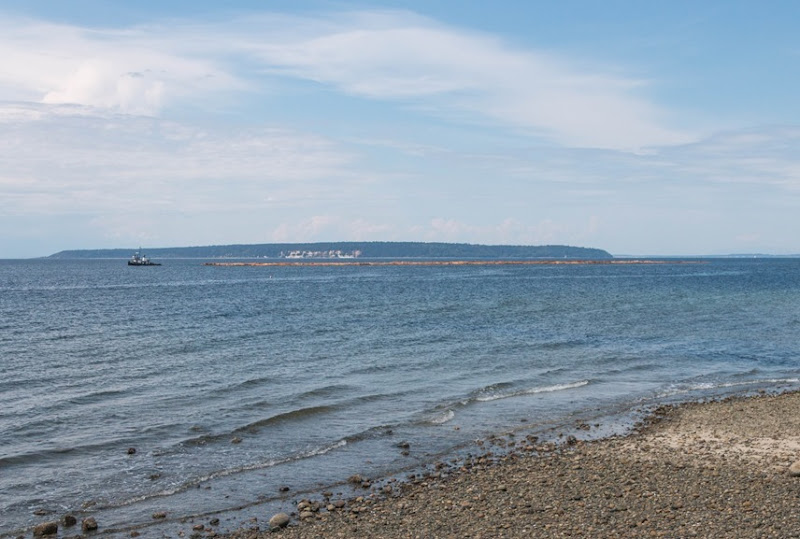 The wide trail runs along the shore just up from the beach. Along it they have placed a number of old pieces of logging equipment along with interpretive signs. 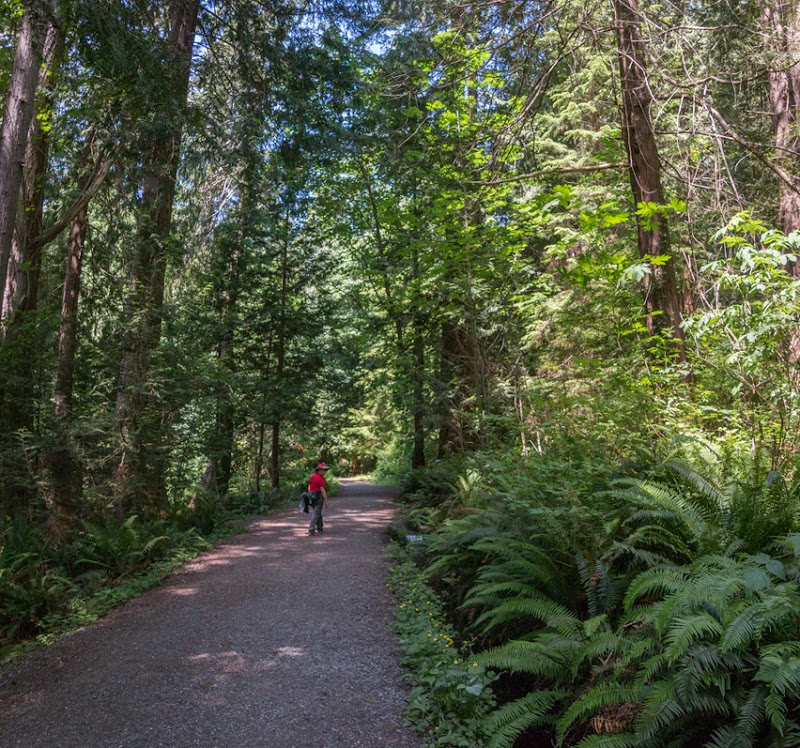 One of the little boats that herd the logs around the yard at the mill. 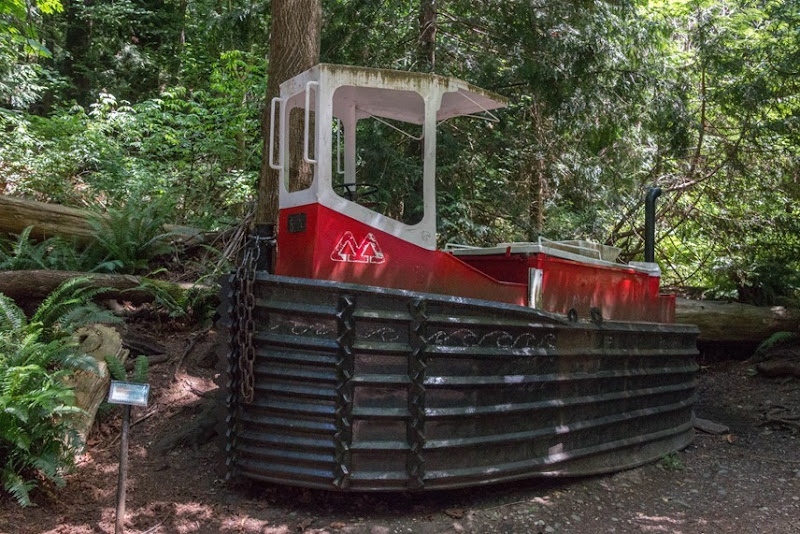 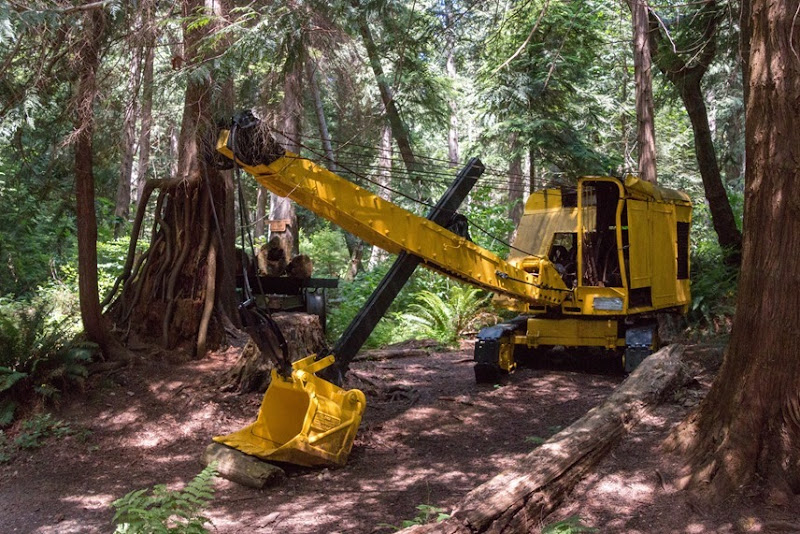 This strange tree seemed to have started to grown horizontally and then made the turn upwards. 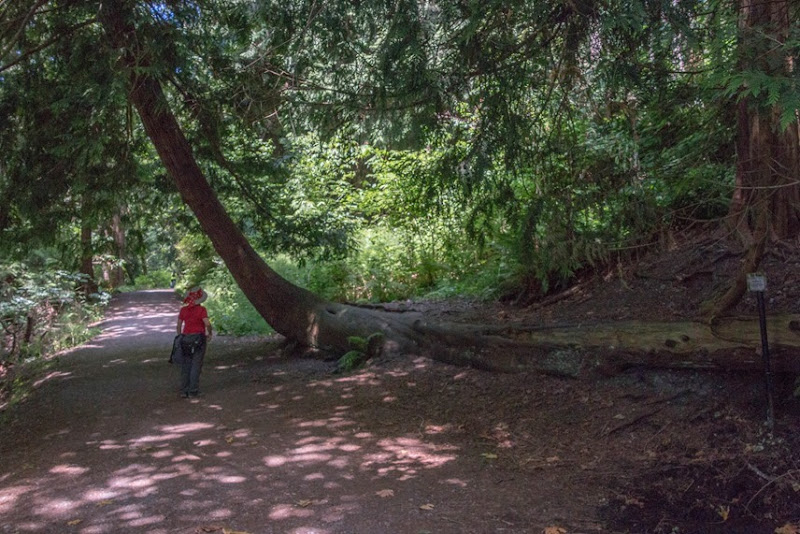 Sometimes the signs were a bit overgrown. This was way too far back in the brush. On one of the closer ones I tried to push a leaf out of the way to read it and got stabbed badly enough to draw blood by the thorns on a berry bush. 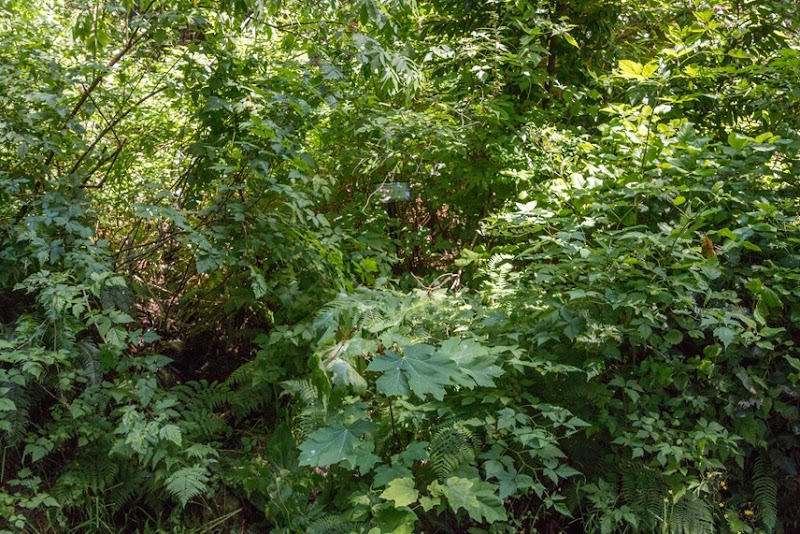 We always love to stare up at the giant tree. This is a Douglas Fir. 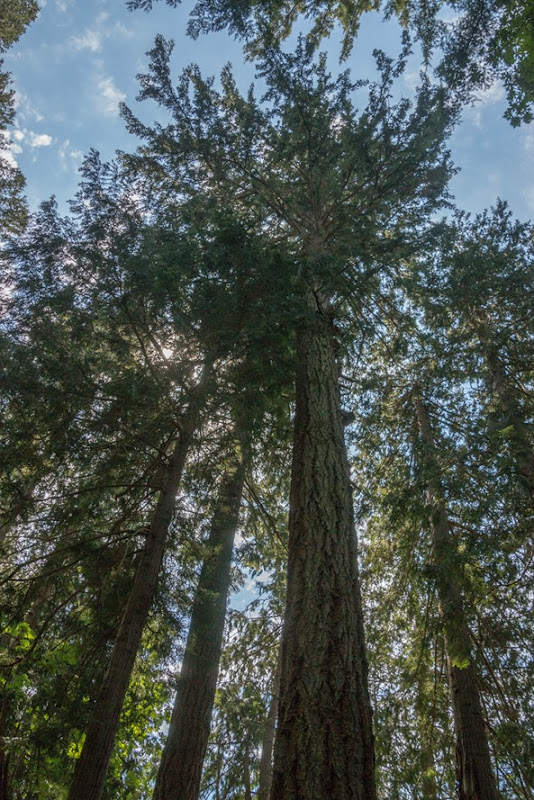 The little things are pretty amazing as well. 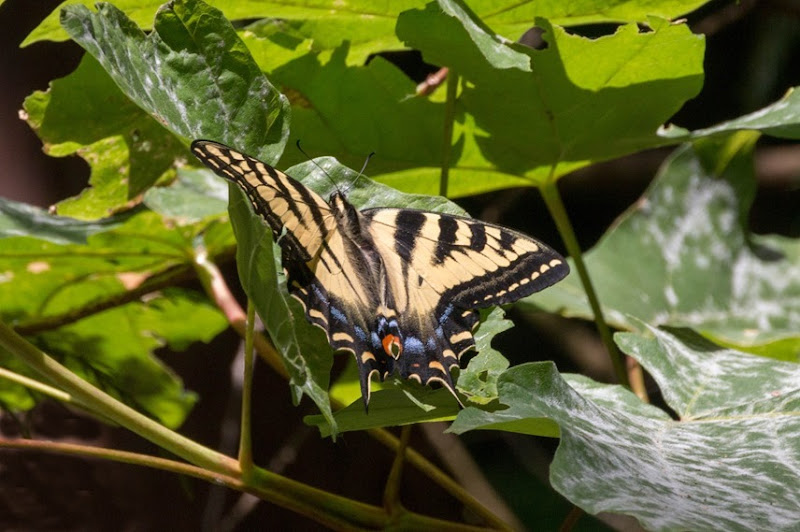 This trailer had huge flanged wheels to run on log rails. 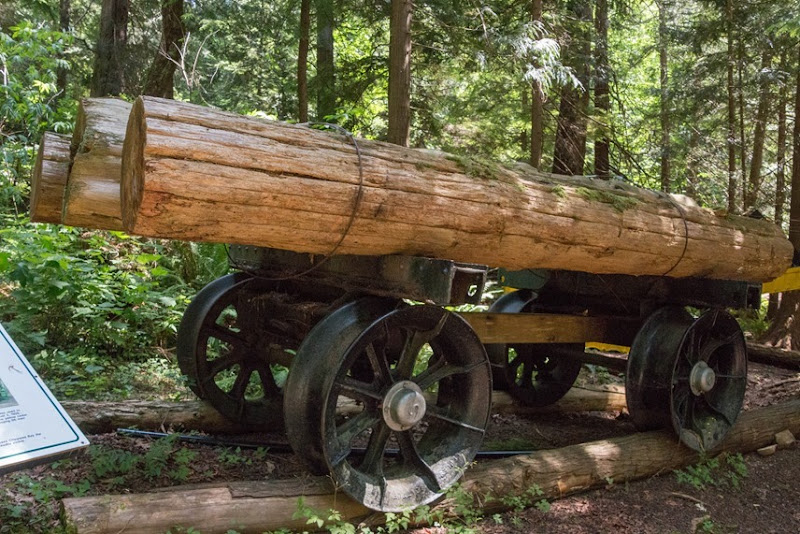 A Steam Donkey. A mobile steam engine on a sled that they could haul around to power various equipment. 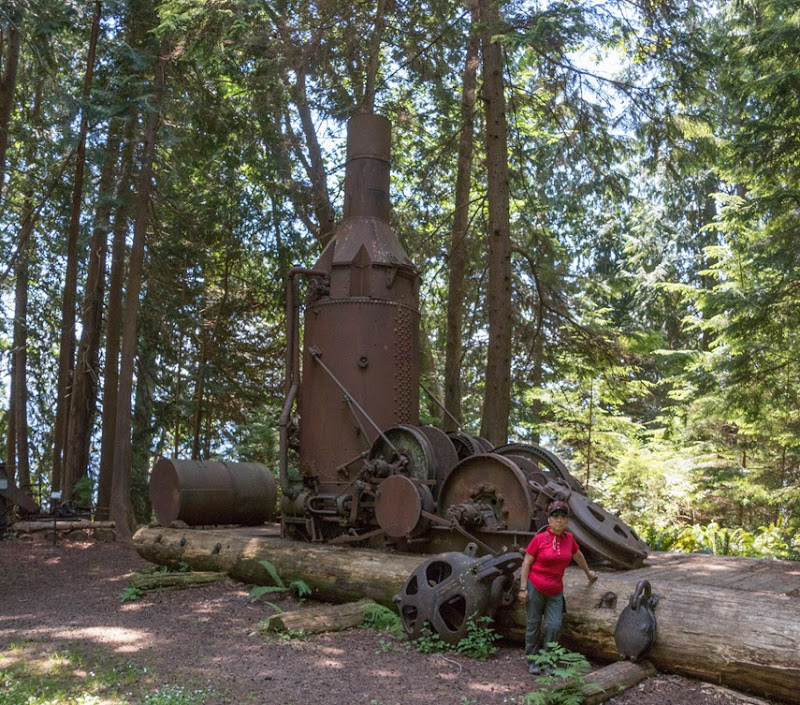 Someone painted a little fairy door on this tree. 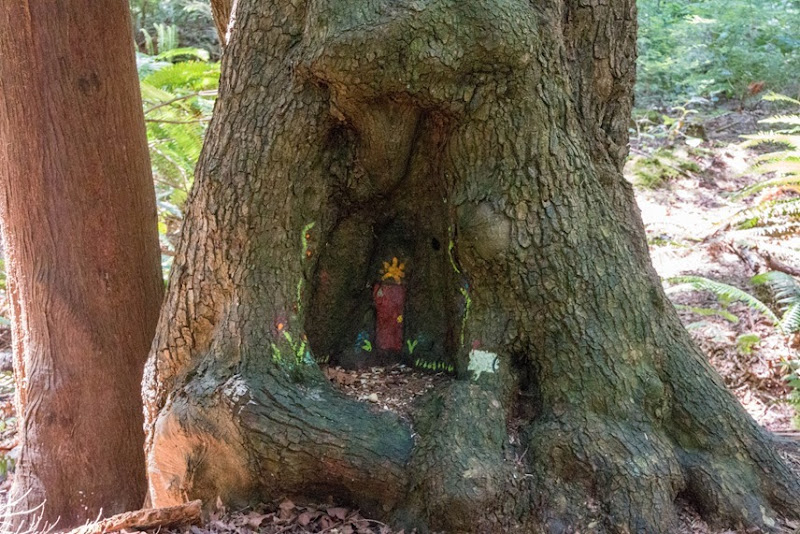 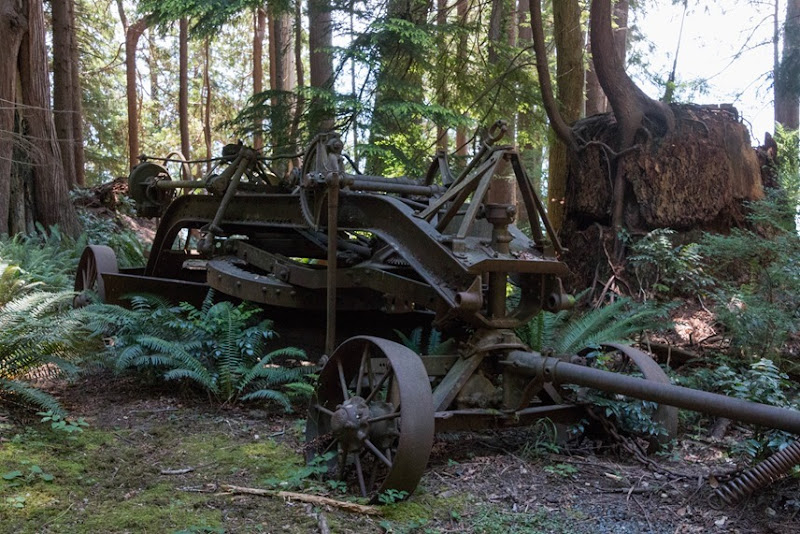 This massive burned out stump had to be at least 50 feet tall. It was very impressive in person. The picture just can’t capture the depth. When do we get 3d cameras? 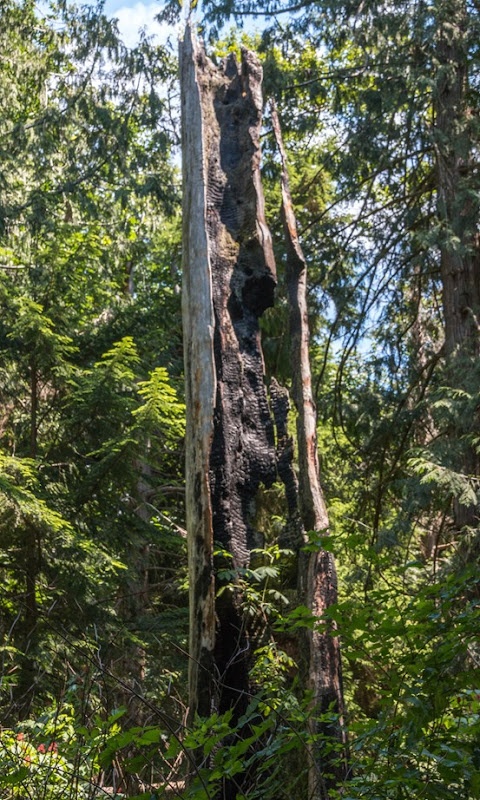 After turning around and heading back, we took this short loop trail that ran down to Second Beach and then back up the other side of this stream and trail bridge. 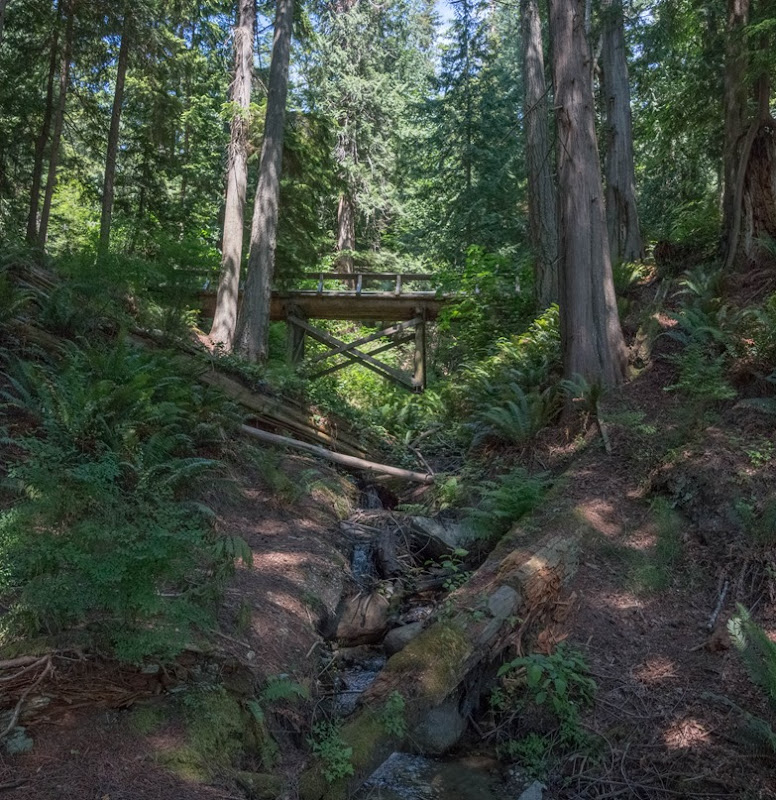 As usual Jennie did her thing on the beach. 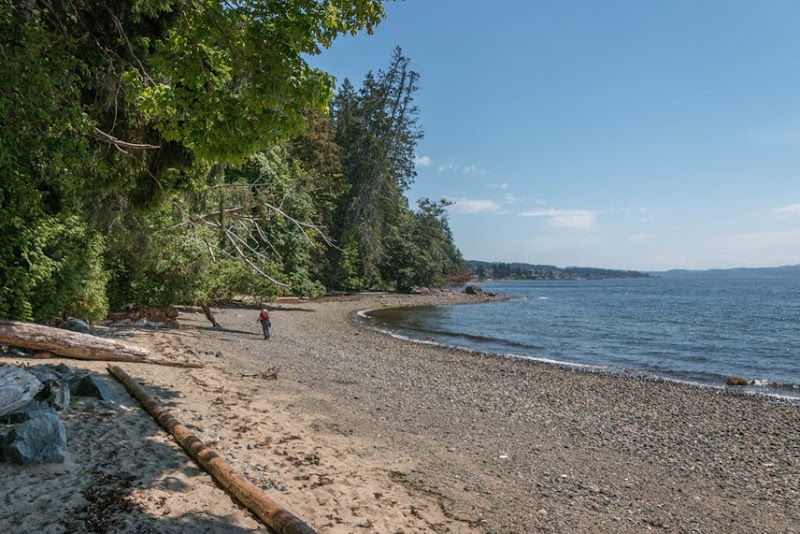 It soon became clear that we were not taking the trail back up but were going to follow the beach. You can barley see her far down by the log. 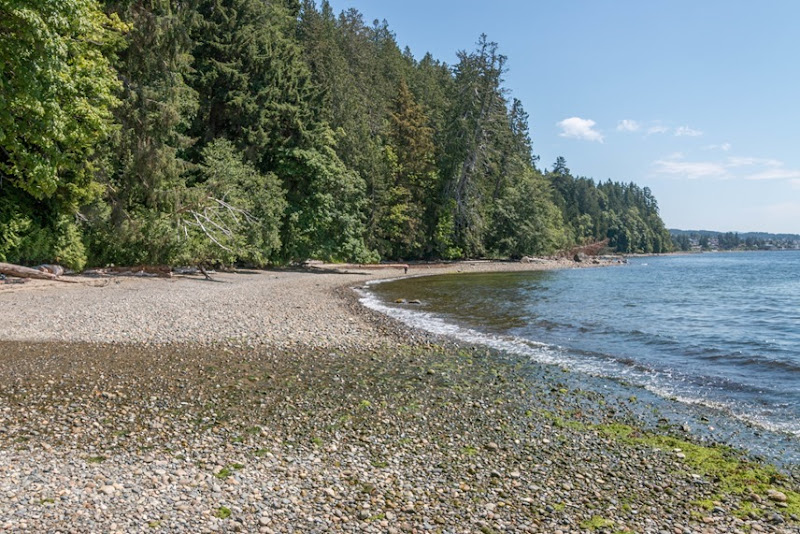 At one spot, while she was collecting treasures, I built a pile of stones. 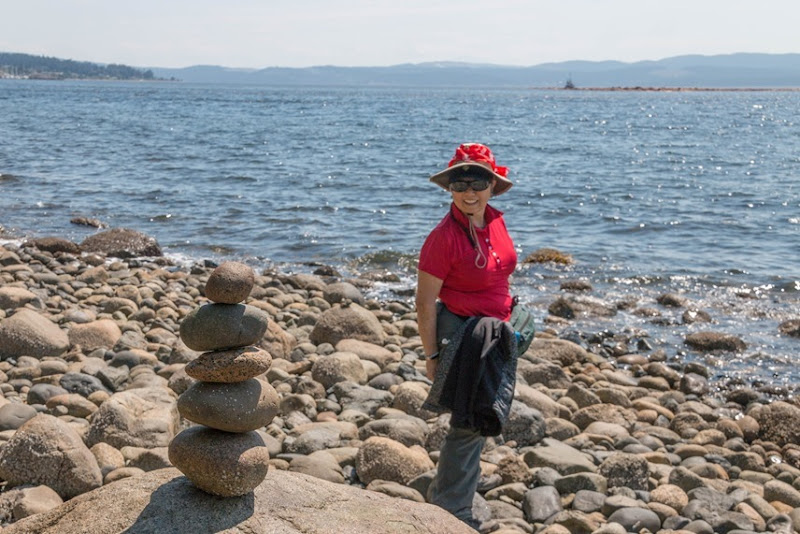 I guess I am not very good because, literally, after 10 seconds and a bit of wind it was gone. 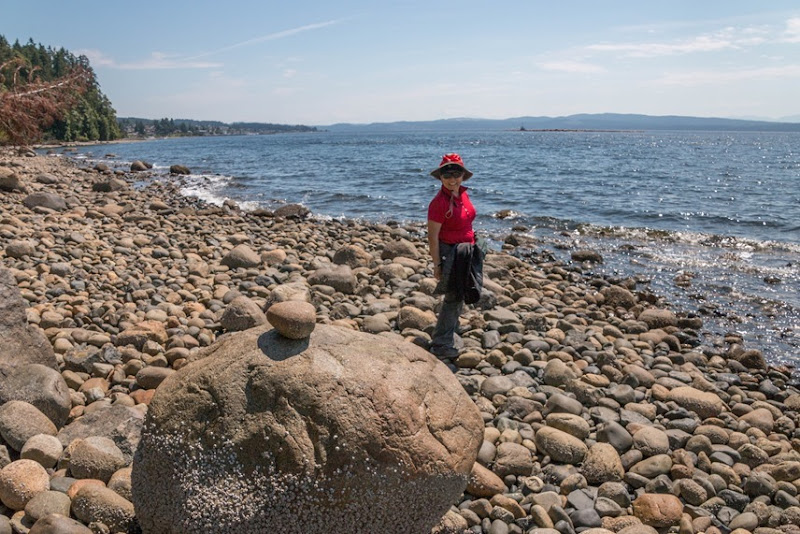 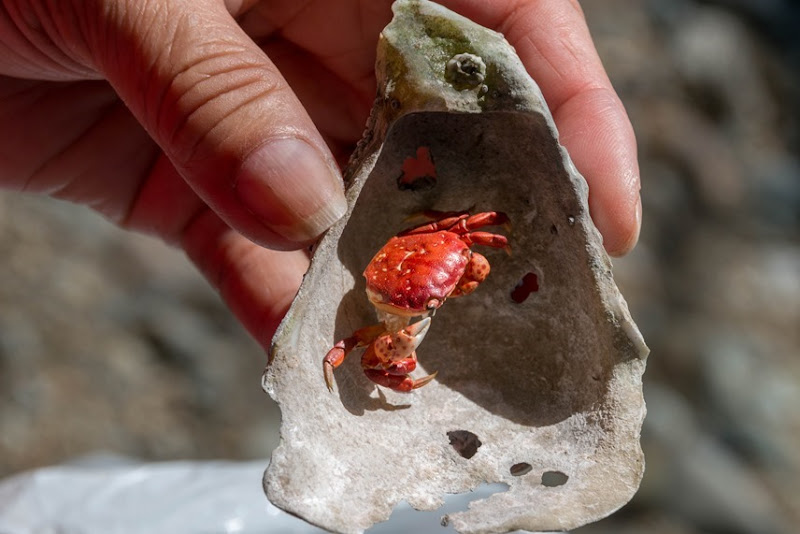 I wonder what caused this tree to have so many curves. 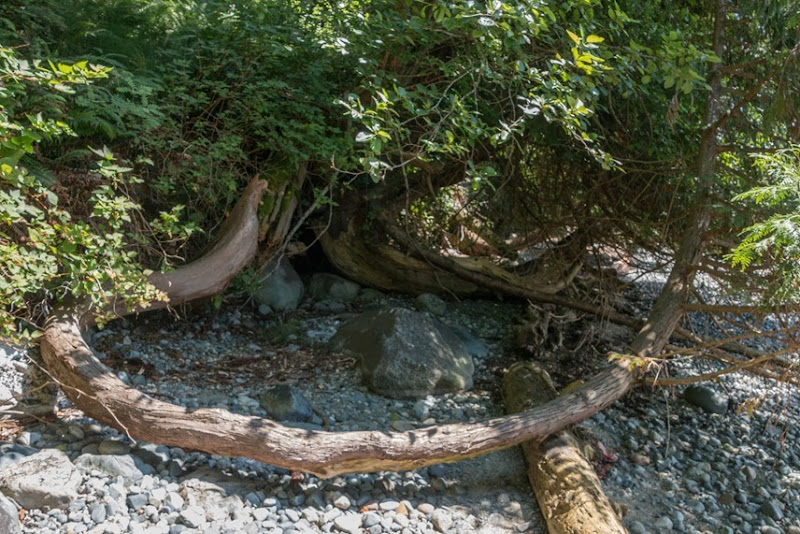 This rope swing seemed to be a long way from the water. I don’t think there would ever be enough water to jump into, over those rocks. 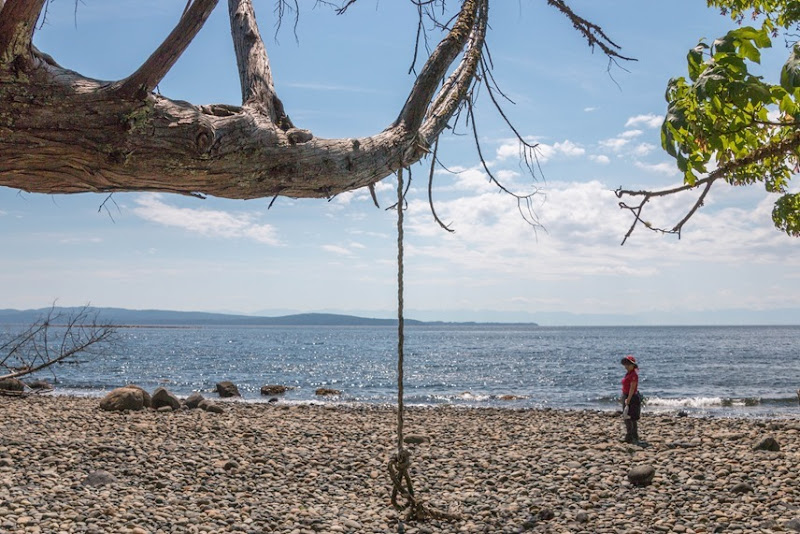 There is a paper mill just north of us. As a breakwater to protect the logs waiting to be processed they have used a string of old World War II ships. We could just see them from the beach. 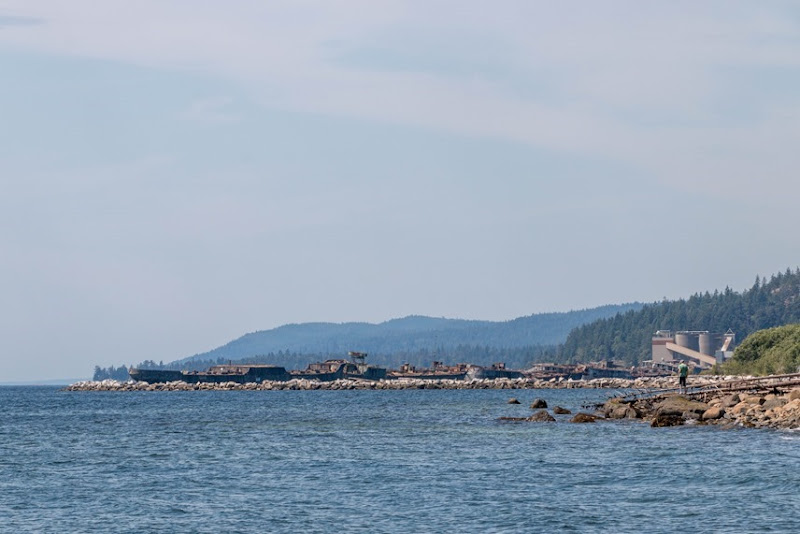 After we got back to the RV I drove up to see if I could get a better view. There is a lookout by the highway. They are called The Hulks. I tried to find a closer viewpoint but was unsuccessful. 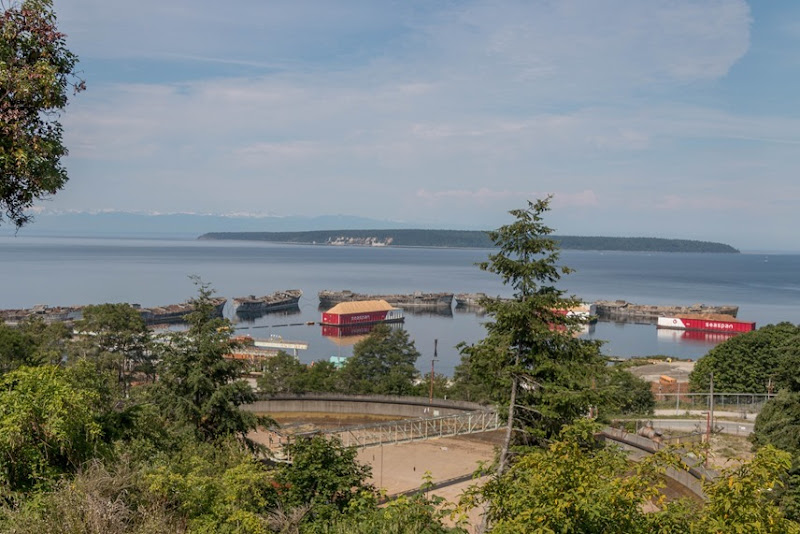 They have all been stripped down and then ballasted so they sit low in the water. Each of them has many massive concrete anchors to keep them in place. Ugly but interesting. 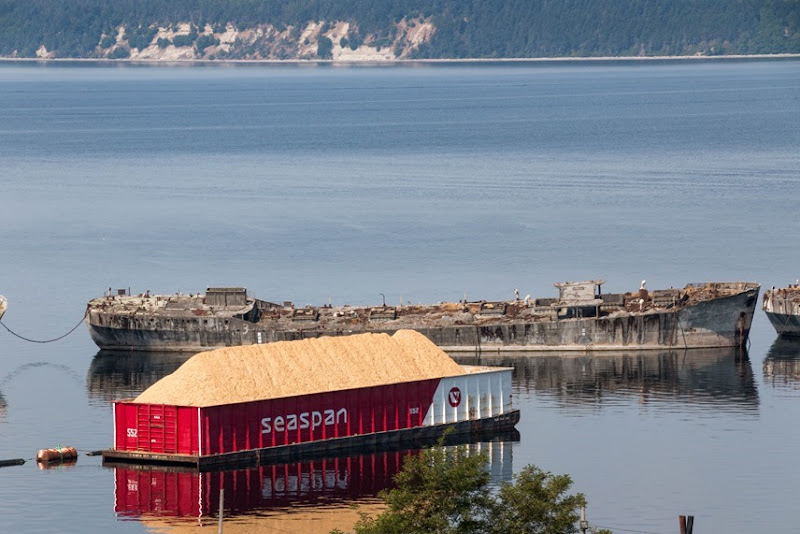 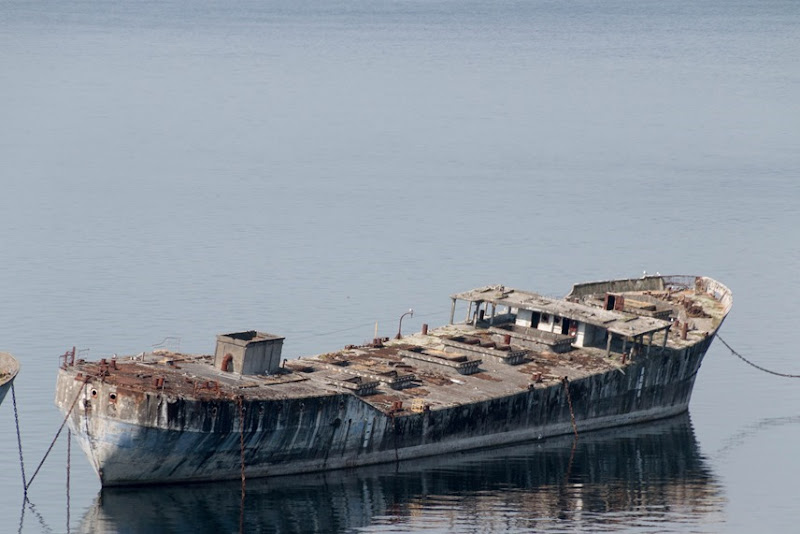 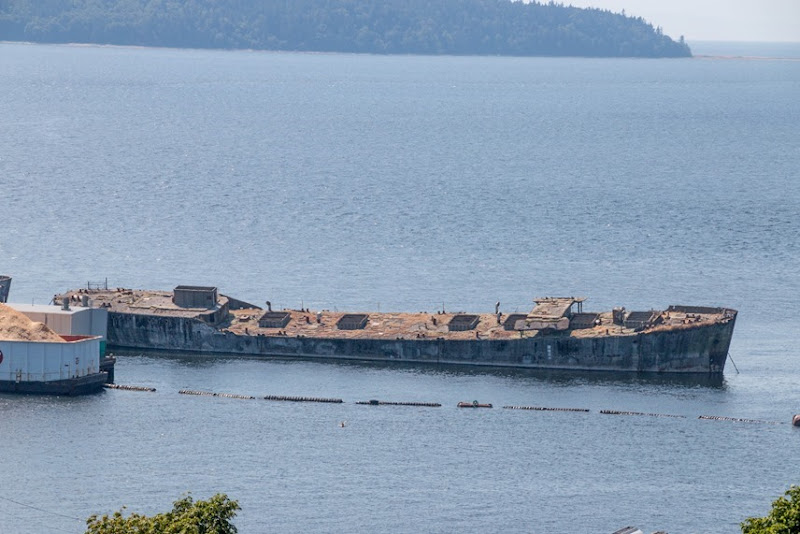 One walk mentioned on websites is the Powell River Seawall Walk. I drove over to check it out. I guess it is mainly for exercise because it didn’t look that interesting. One photo and I was done. 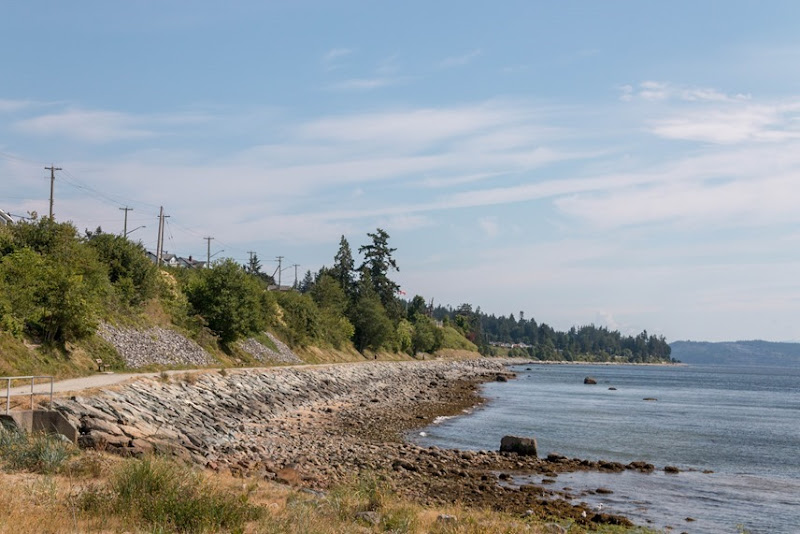