May 10 - Home to Lansing Michigan

The checklist of things to do before leaving home seems endless, as the more I do the more there is to do.  I cleaned out the fridge and set aside stuff destined to go with us but in the rush of leaving in the morning, we forgot to make the final transfers.  I guess I should have done it when I has the opportunity the night before instead of the morning of.  It is a good rule of thumb to leave as little to the morning as possible, as I do not have a clear mind in the mornings.

We were on the road around 9:30 am driving to Sarnia to cross the border into the USA.  The RV in front of us went through without a search and I was hopeful that we would be as lucky but unfortunately, we were the chosen ones.  The customs officer requested that we pull over for an inspection.

We were asked repeatedly if we had any lamb or goat meat to which we replied repeatedly, “No”, but still they did not believe us.  I said we had nothing fresh, no milk, fruit or vegetables.  Canned meat and soup and stuff were permitted but I declared that we had nothing.  When they opened out fridge it was empty, except for condiments and cooking sauces.

When they inspect the RV, they ask you to wait in the lounge while they look through your stuff.  We were asked to produce our currency, both Canadian and US but we had left our wallets in the RV so Stuart had to got get our wallets.  The customs officer radioed ahead to let the others know that Stuart was heading to his RV, (in case they thought he is running away or trying to hide some contraband??)

I think they were most uncomfortable with the fact that we were travelling through the states until the end of September, seemingly without an agenda or firm return date.  When I told the officer that we had to get home for the start of the curling season, (“oh, you mean that thing with rocks”), so that is why we are travelling in the summer and at home in the winter and not lounging in Florida like other retired Canadians.

After a half of an hour we were cleared to go so it was not too invasive a search.  Back on the highway driving through Michigan, we noticed that the roadside was littered with dead animals and I do not mean just raccoons and squirrels; there were numerous deer, dead carcass.   We had a close call with a pheasant that decided to fly across the highway just in front of us, narrowly missing the windshield that has just been replaced this spring ( $2,000 insurance claim).  The farther we drove there were fewer dead wild critters.

The drive was uneventful, flat scenery, very bumpy roads causing lots of rattling and shaking inside.  After 6 hours on the road less an hour for a lunch stop at the Brigantine restaurant in Sarnia, we finally stopped in Lansing Michigan and parked in the Walmart for the night. 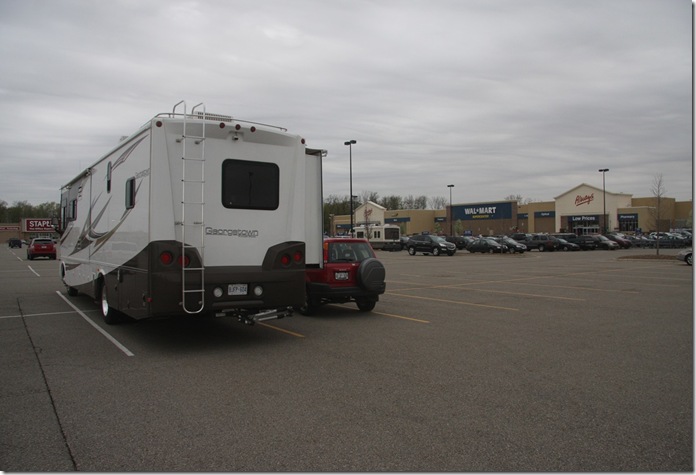 Stuart went in to buy a Verizon cell phone (wow, only $10 plus cost for prepaid minutes and it came with a carrying case and straps) and an internet stick.  While he installed and set up the equipment and landed the beast, I went to do a grocery shop for the next few days of dining.

The parking lot had other RV parked for the night so we were in good company.  Being a 24 hour operation, there was always traffic, coming and going.  We were tired so we slept well.