Aug 12 – Around Skagway and Dyea

There are two main passes that the miners took on their way from the coast up to the Yukon gold rush in the late 1800’s. Skagway is at the bottom of the White Pass and in the next bay over is Dyea at the bottom of the Chilkoot Trail. Both were horrible to use but they were the best and fastest way in and caused Dyea and Skagway to become boomtowns. At it’s peak Dyea had 10000 residents but as soon as the White Pass and Yukon Railroad became operational from Skagway it basically went to zero overnight.

One of the things to do in Skagway if you have transportation is go to see the old Dyea town site. Since today was kind of gloomy and threatened rain we thought this would be a good thing to do.

The road first goes up the mountain side beside Skagway to a view point. Skagway is a long skinny town squeezed in a river valley with steep mountains on either side. It is about 3 streets wide and 23 long with all the tourist stuff on the main street by the harbour. 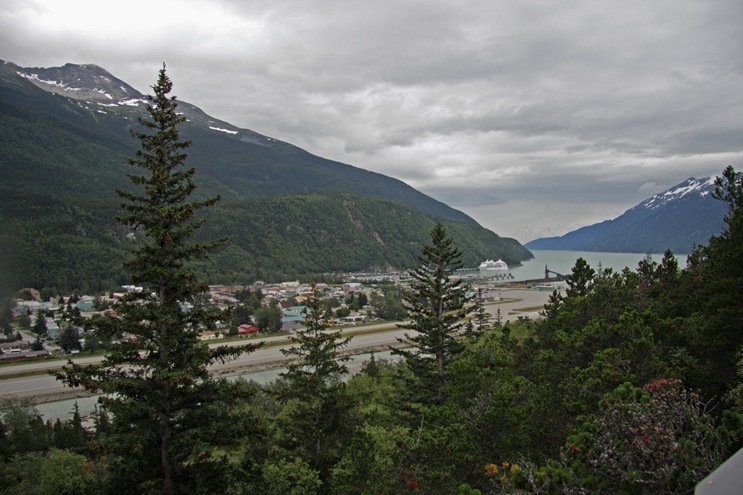 To get to Dyea we had to go about 10 miles up and around the next inlet on the narrow but good dirt road carved into the side of the mountain. 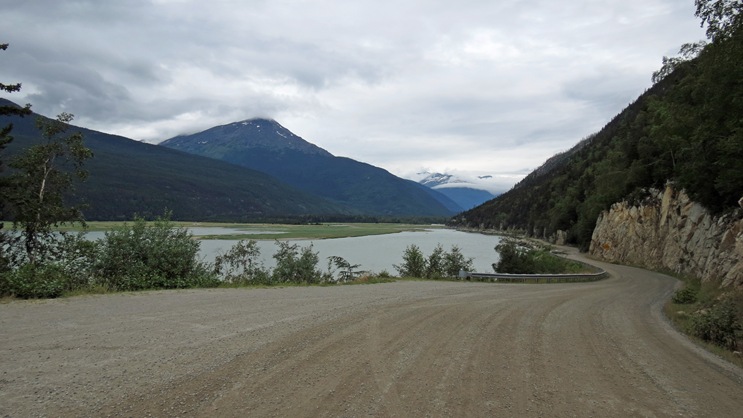 We passed the trailhead to the Chilkoot Trail with some guys about to start their hike. It is 53 km long, takes 3 to 5 days and a lot of ups and downs. 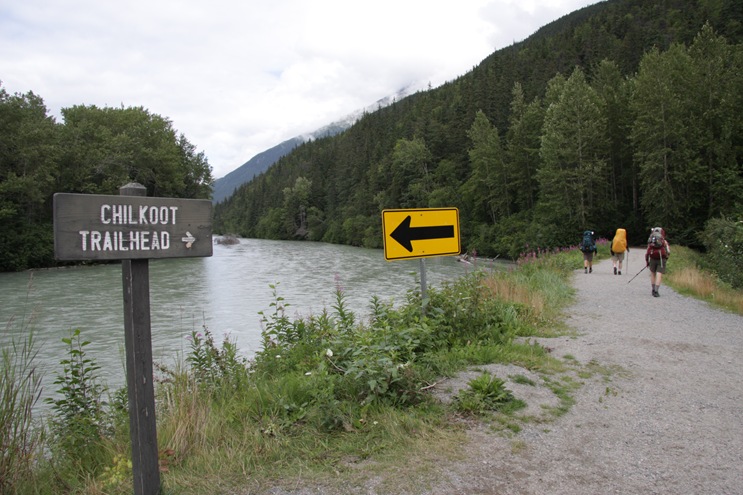 First we stopped at this small cemetery. About 70 men are buried here that were caught in an avalanche as they were climbing the Chilkoot Trail. There were people from all over the world. Gold fever makes people do strange things. 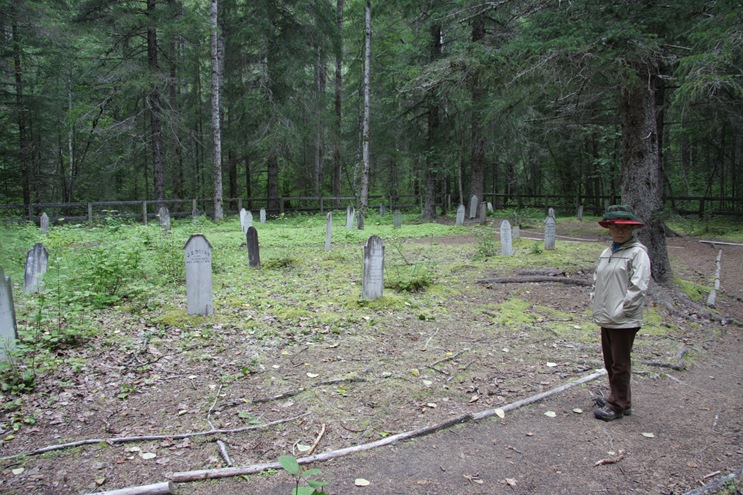 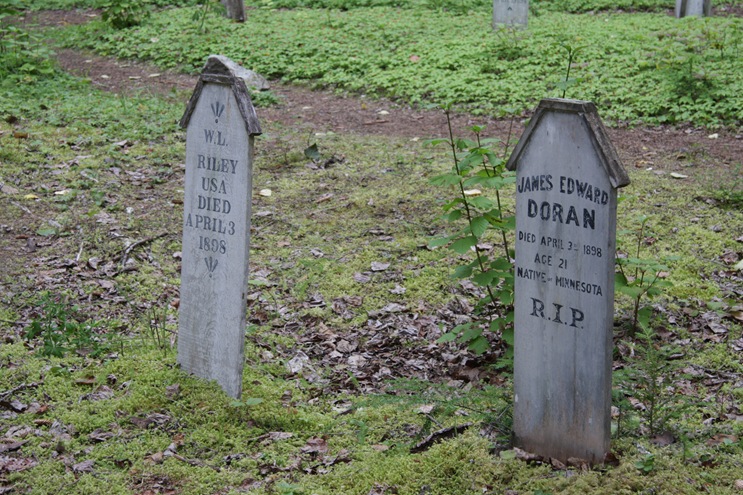 By now it had started to rain a bit. 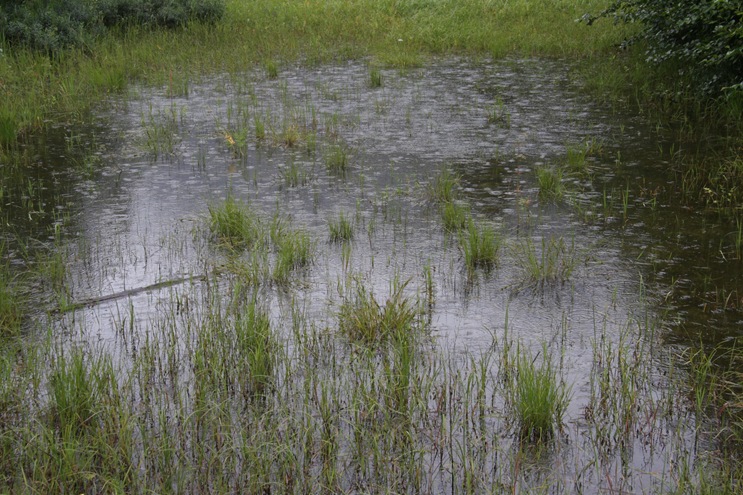 They warned us that there was not much left of the town site and that it is was mostly overgrown. There was a half mile trail through the trees with signs pointing to the “False Store Front”. 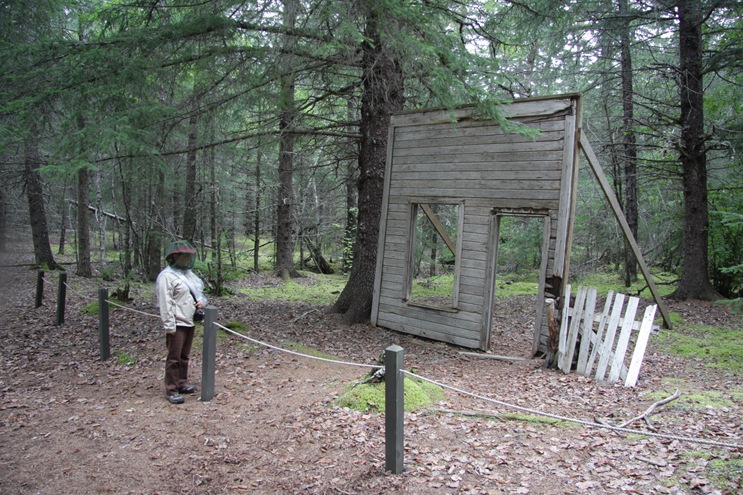 Definitely worth the trip! That is all that is left. Everything else was either scavenged or rotted. This was one of the other “buildings”. 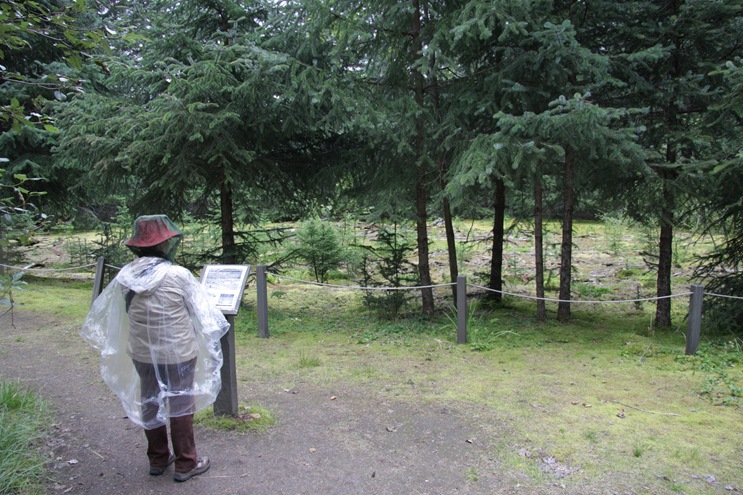 There were a lot of interesting mushrooms so I am going to show those. 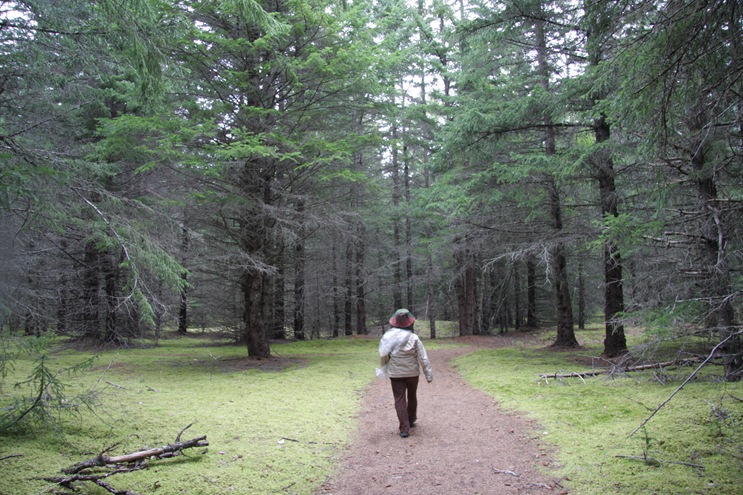 We drove out to the tidal flats beyond town and watched some people fishing for salmon that were heading up the creek to spawn. Spawning salmon are don’t usually eat so they are not interested in lures. We saw one guy with a fish but I think he snagged it by the fin. 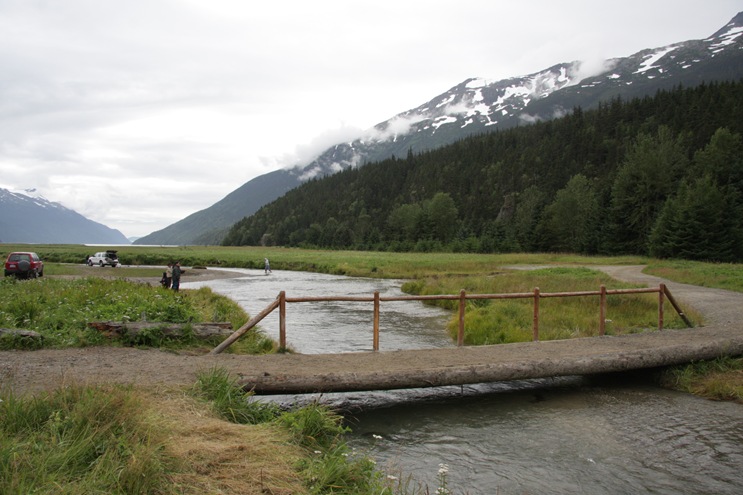 We could see quite a few fish and when we walked on the bridge or along the shore they would quickly scatter. 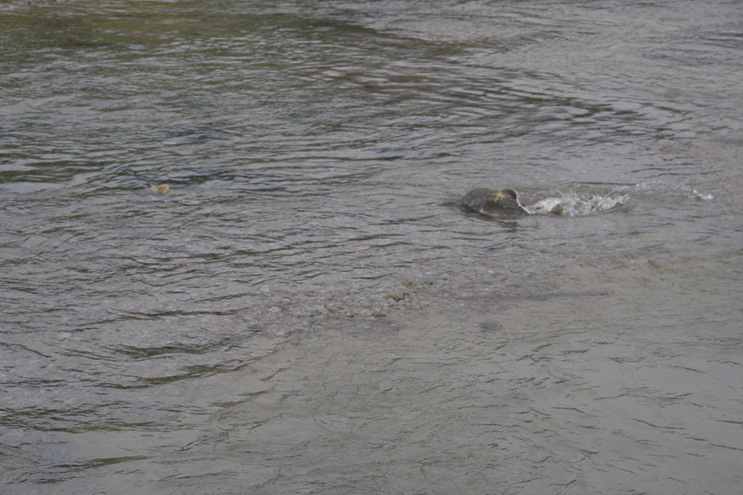 In the picture below the boy had tried to cast but had let go on the back swing. He stared out in the river for many seconds trying to see the splash of the lure and then realized what happened. 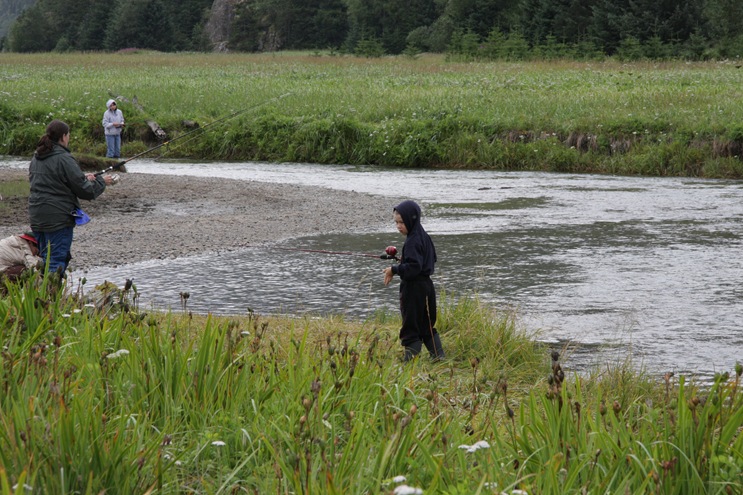 We went out to the very end to the remains of the old dock and Jennie did some more rock collecting. 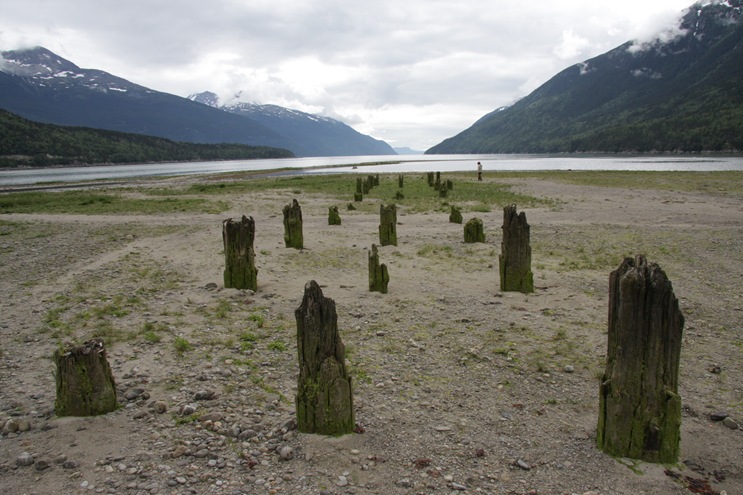 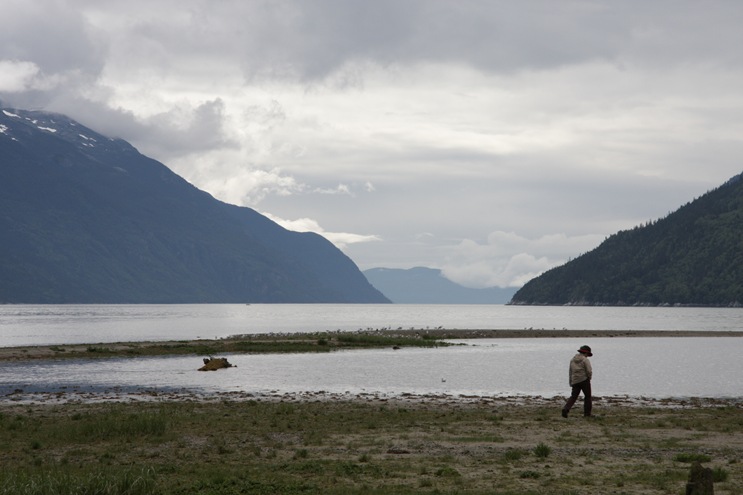 Yesterday at the visitor’s center the lady had suggested we go out a particular road if we didn’t mind potholes. Today I couldn’t remember why but we went exploring anyway. Her description of the road was correct. 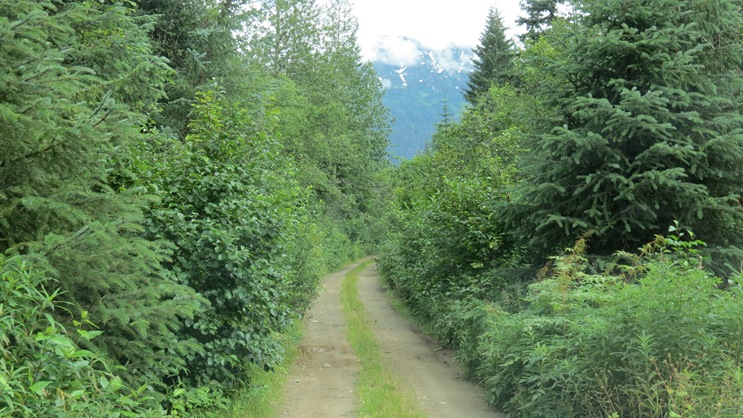 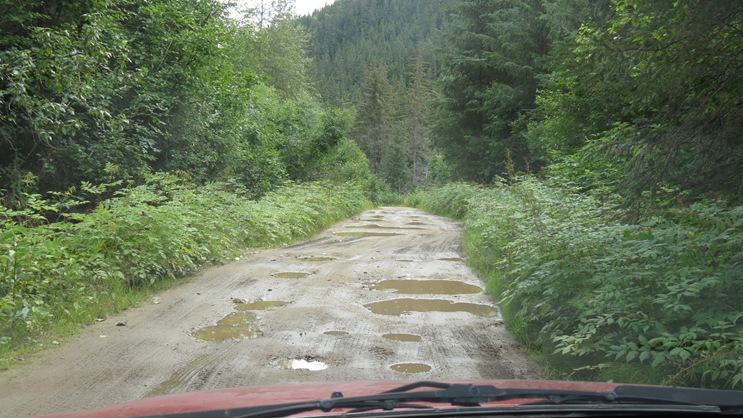 It was a weird road to figure out. It seemed insignificant but in one place they had obviously dug a huge amount of hillside out to get through and in another spot they had drilled and blasted a large rock cut.

About 2 miles in we figured out the reason we were told to go. We crested a hill and saw this huge hanging glacier 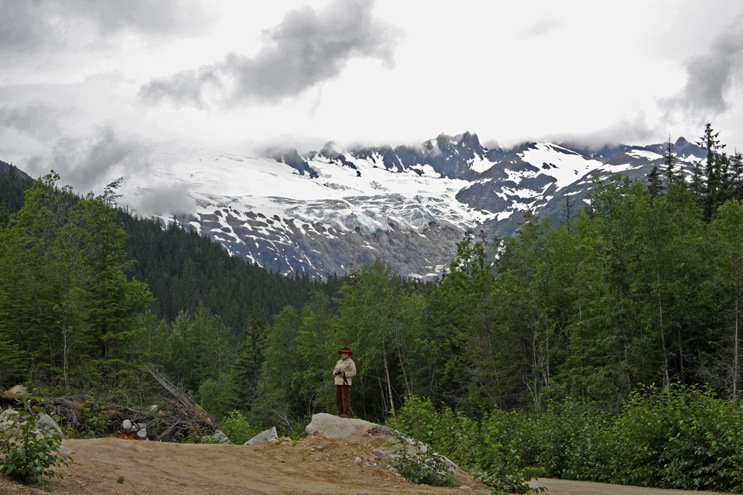 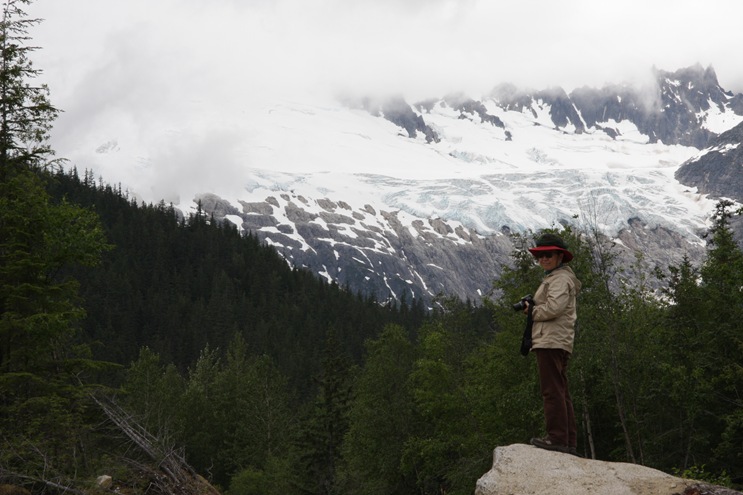 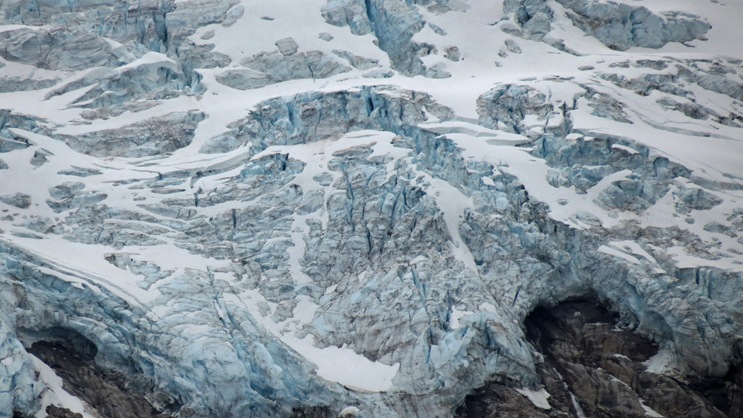 We assumed the road continued and would eventually get us to a closer view so we kept going. After another few miles of potholes we came to this foot bridge. 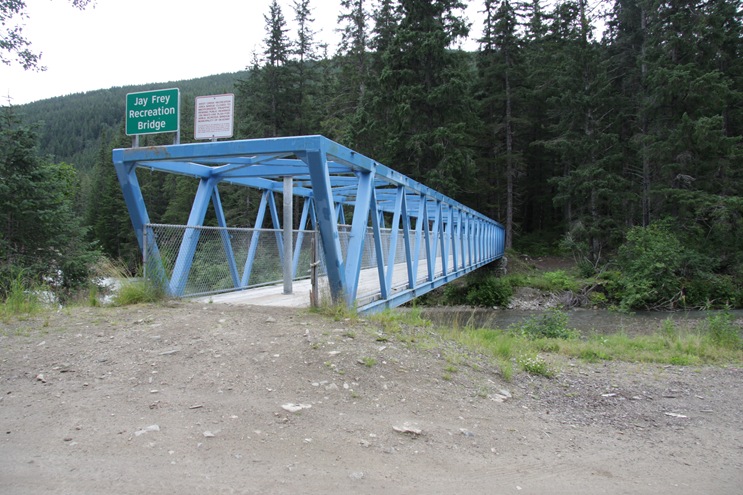 There were no signs saying what it was for. The small sign basically said no motorized vehicles. We walked across and there was an unmarked trail to somewhere but we never did figure out why this expensive bridge was out in the middle of nowhere.

Then after about another mile the road simply ended at a rock face. We were so surprised that I forgot to take a picture. An expensive road to nowhere. At least the glacier view was worth the trip.

By now it was about 2 so we headed back to town and the RV for some lunch. 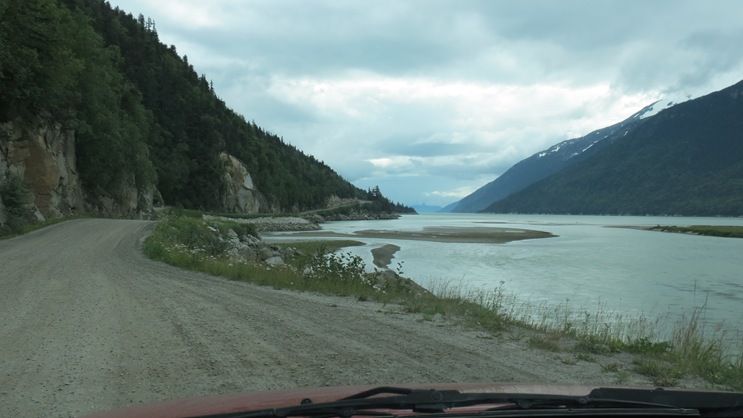 Next we headed off to the north end of town to a gold rush era cemetery with a nice waterfall behind it. 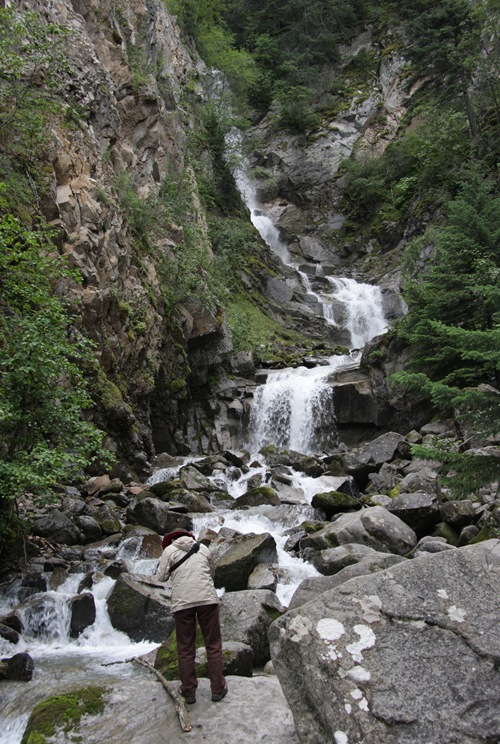 The whole thing is about 300 feet tall but view of the upper section was blocked by some trees. The walls of the gorge were very steep. We could see lots of trails where people had tried to climb to get better views. I investigated them all but each one was a dead end. You can see Jennie waiting below as I explored, in the next picture. 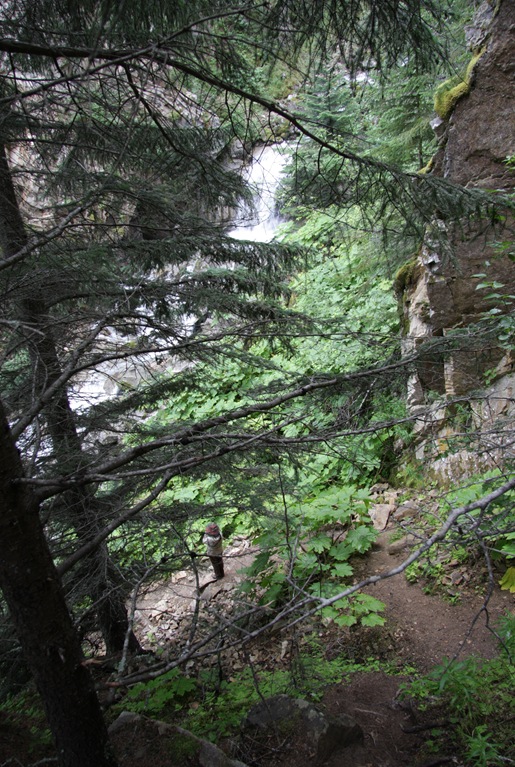 We satisfied ourselves by scrambling over the rocks to the lower falls. In the next picture, we were trying to do the old picture of the guys up at the falls standing on Jennie’s hand but we couldn’t get his attention and he moved away too quickly. 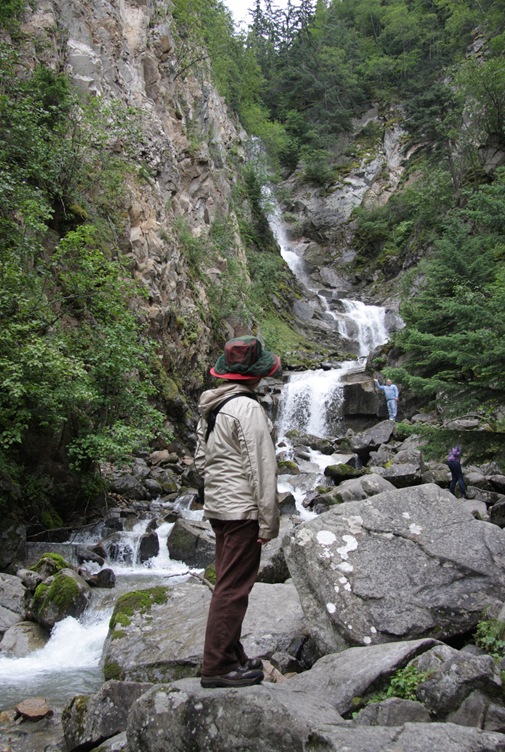 We then looked around the cemetery for a bit. 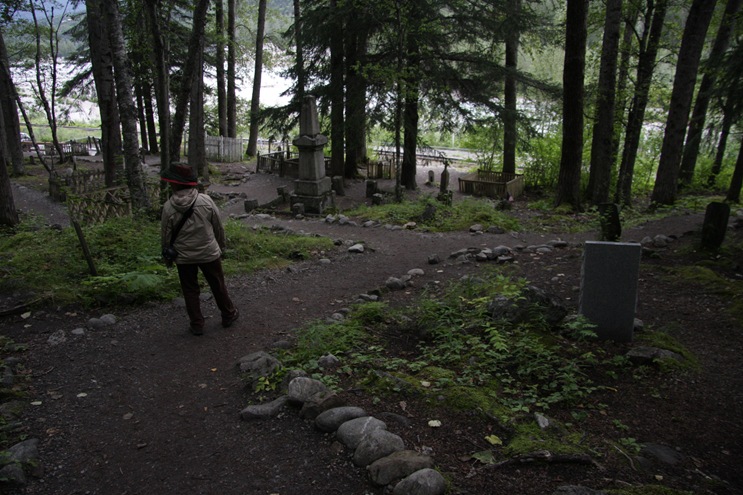 Skagway was a pretty lawless place. It was basically run by a con man called Soapy Smith. Eventually everyone got fed up and he was killed in a gun fight with a man named Frank Reid. Reid also eventually dies of his wounds. Here is Reid’s grave. 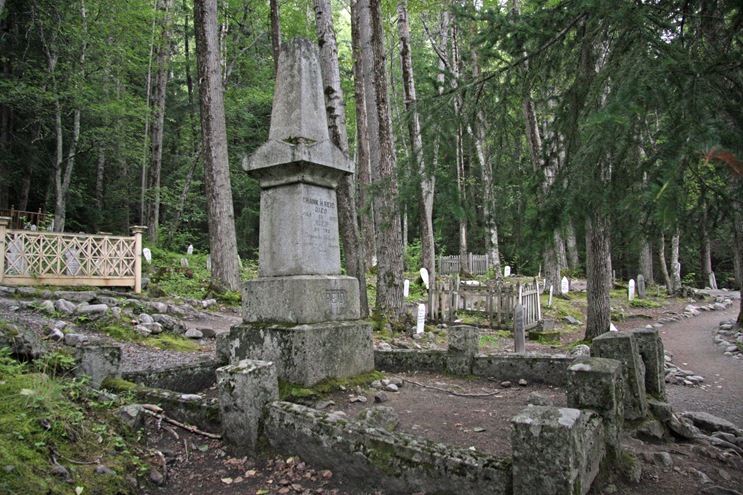 and here is Smith’s. 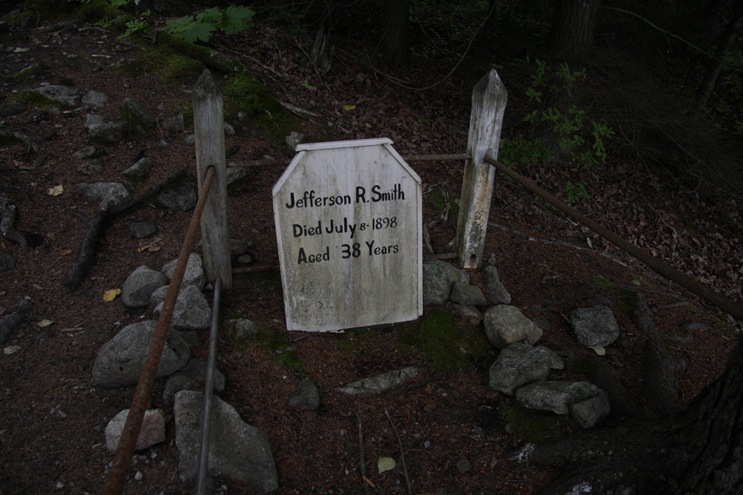 The cemetery is out a short dirt road. As we headed back to the car we saw some people struggling with a flat tire. The jack that came with their Mazda SUV was not up to the job and they couldn’t lift the car high enough without the jack threatening to collapse. Since the CRV is a fairly high car we tried it’s jack. It took me a few minutes to even find it as I had never used it before. It looked a lot beefier than the Mazda jack and lifted the car with no trouble. Their next problem was that their temporary spare was pretty low on air. I also always carry an air pump so that was soon fixed. Next they had trouble using their lug nut wrench. I lent them the cross bar one I had, to tighten the wheel. We followed them back to town to make sure they made it OK. Our good deed for the day.

I usually carry all this stuff anyway but I had made sure it was all there on the trip to Alaska because I knew that we would be travelling on some pretty remote roads and would have to rely on ourselves if anything went wrong.

Train trip tomorrow. It’s still pretty cloudy here so we are crossing our fingers for the sun to return.