It is kind of a gloomy day. The forecast called for rain later in the day but it never happened. In the morning we went for a walk around downtown Stewart. It didn’t take long. 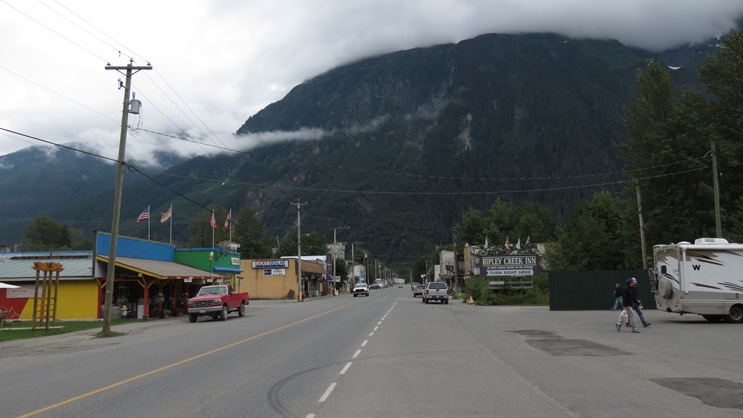 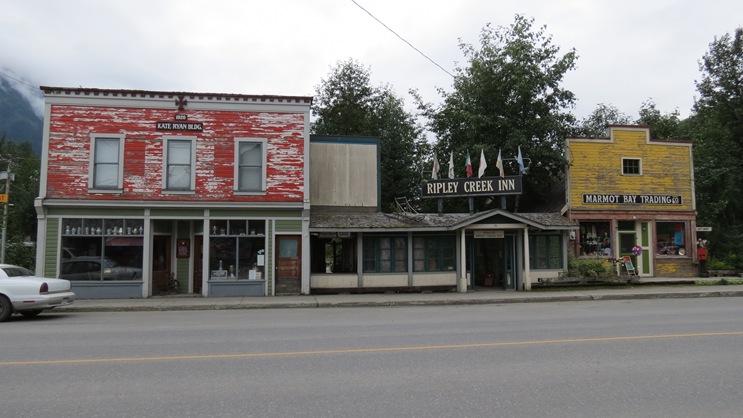 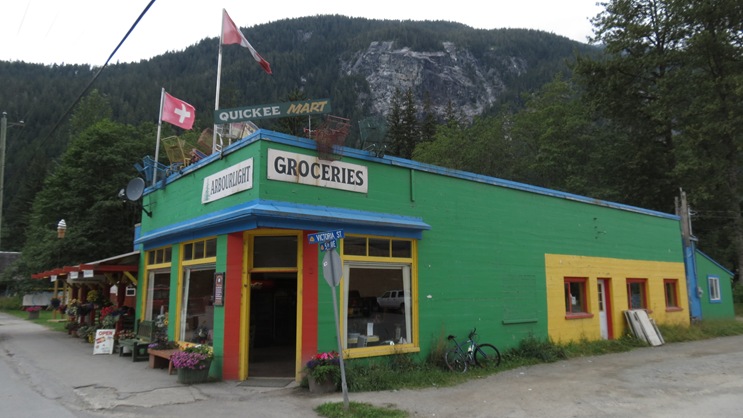 Then we went out this boardwalk on to the tidal flats that just ended in the middle of nowhere. I think at some times during the year you can see a lot of birds but there were none today. 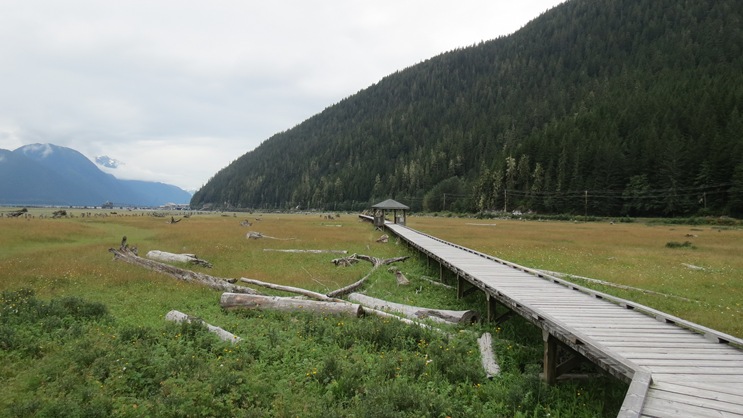 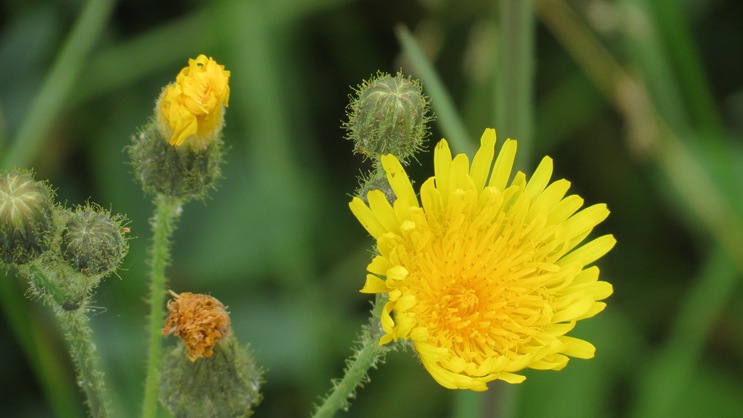 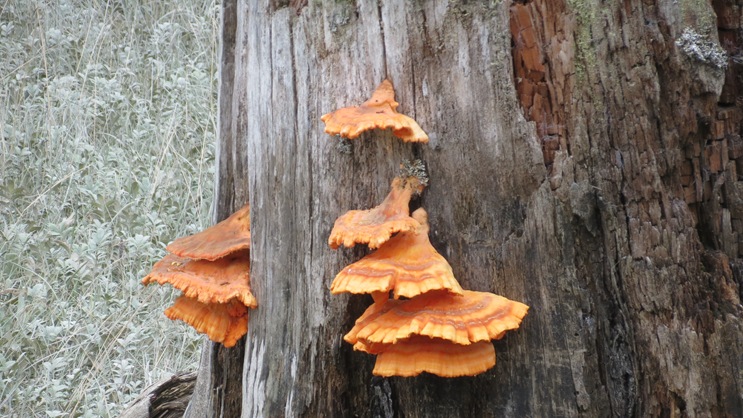 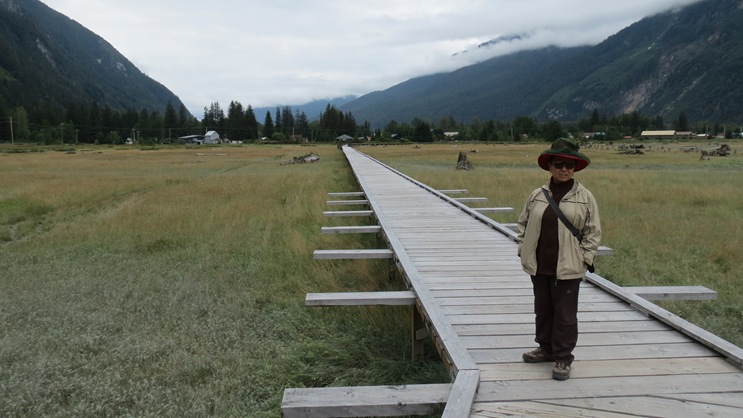 At the end was this severely overbuilt bridge to nowhere. 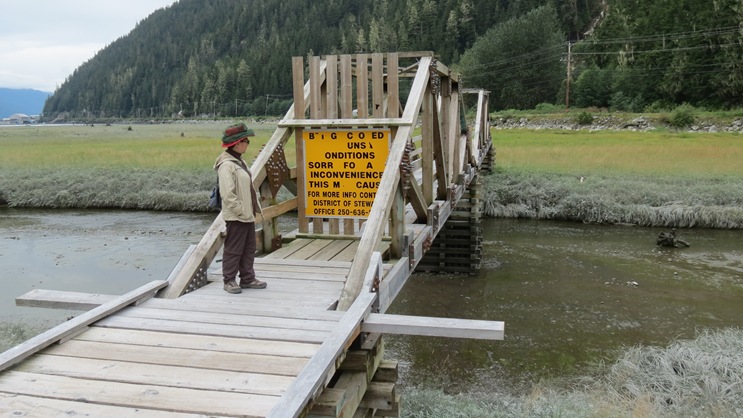 This is how they connected each joint. I am not sure what they thought was going to go over it. 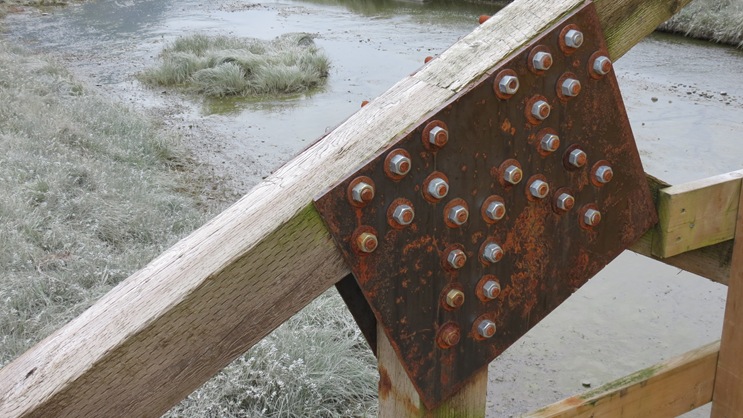 This afternoon I devoted to planning the next few weeks.

When I was planning the trip over the winter I just assumed that whenever we got as far as Stewart we would just zip over to Jasper and Banff to absorb whatever time we had left.

In the last while I have been doing more reading on the towns and cities along the Yellowhead Highway in northern BC and I think we will change our plans and linger around here a while longer. I can see us going to Jasper on a future trip but we may never come this far north in BC again so it is best to see what there is to see while we are here.

I think we will next go down to Terrace, BC and do some day trips from there, including one over to Prince Rupert. In a perfect world with infinite money and time, I would really like to go over to the Queen Charlotte Islands or Haida Gwaii. Just to get us and CRV over and back on the ferry from Prince Rupert would be about $500. Taking the RV would be ridiculous. There is too much to see for just a day trip so we would have to book real accommodations. That is just too much planning for this late date. Hopefully we can go sometime in the future.

In the evening we went to see the bears. The number one thing to do in Stewart and Hyder is to go to Fish Creek and watch the grizzly bears eating the spawning salmon. I am not sure what it is about this spot but just about every morning and evening bears will come to gorge themselves on the fish to build up fat for the long winter.

One the way we saw this worse for wear RV. 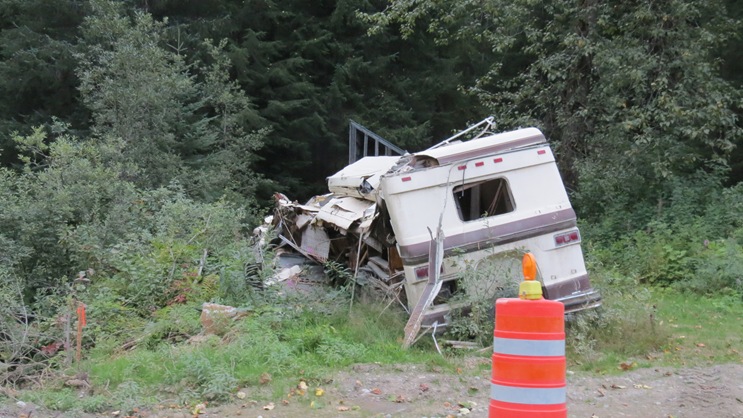 The US National Parks Service has built a long boardwalk here to keep the people and the bears separate. 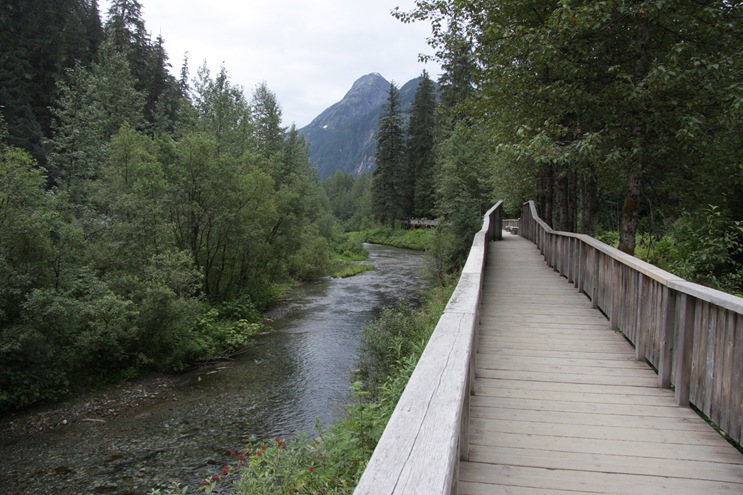 I just don’t understand people utter fascination with the bears. Some come and spend months here. They come out every day and stake a spot on the boardwalk with their tripods and huge lenses. And wait… 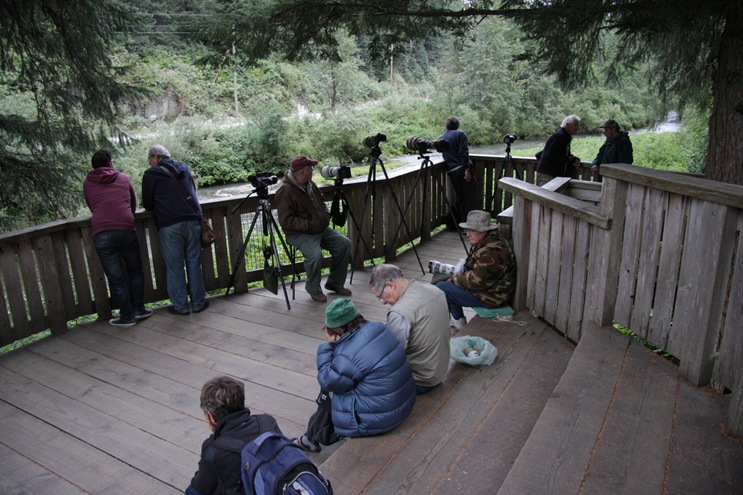 We got the about 7 pm and stared at lots of fish, dead and alive, and seagulls. 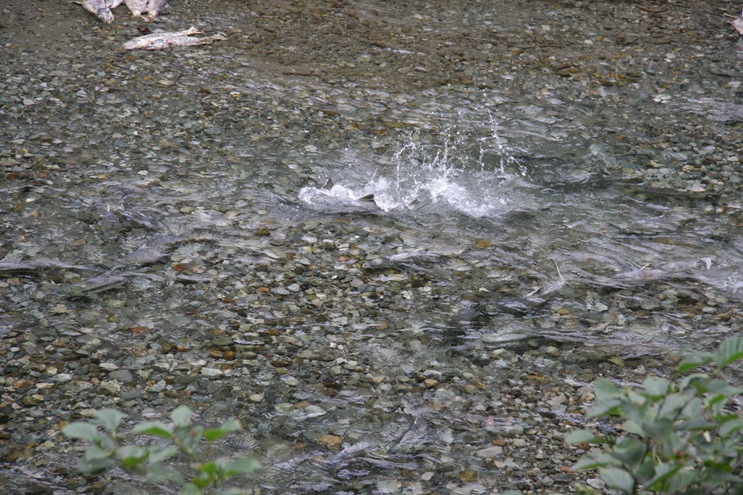 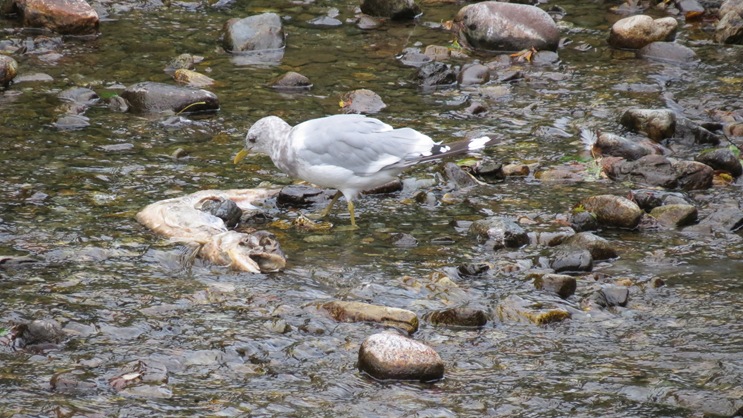 About 7:45 a bear appeared but it was down near the start of the boardwalk. Since we all assumed that the “professionals” knew where to wait, everybody was down at the far end. So there was a mass move up the boardwalk and new jockeying for position. It was even on the opposite side from the creek. 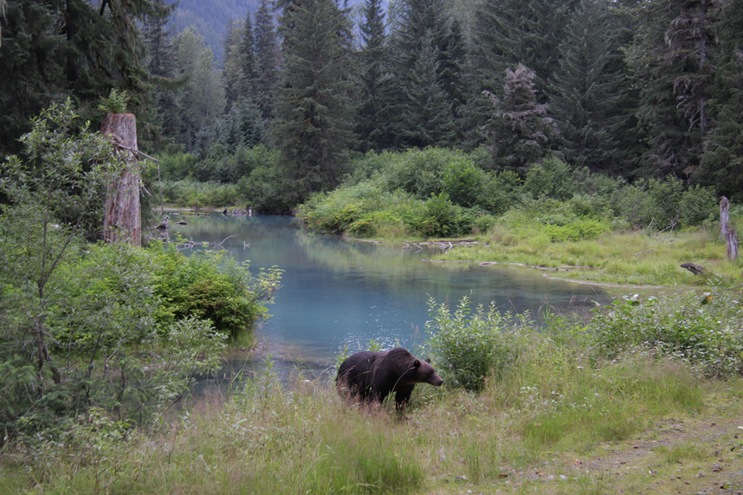 It soon wandered under the walkway and into the creek. It was pretty lazy and just went for the dead fish. Recently dead I assume. 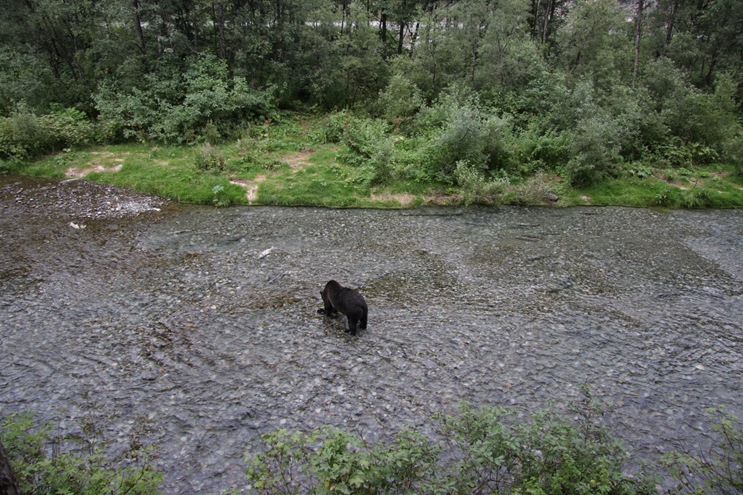 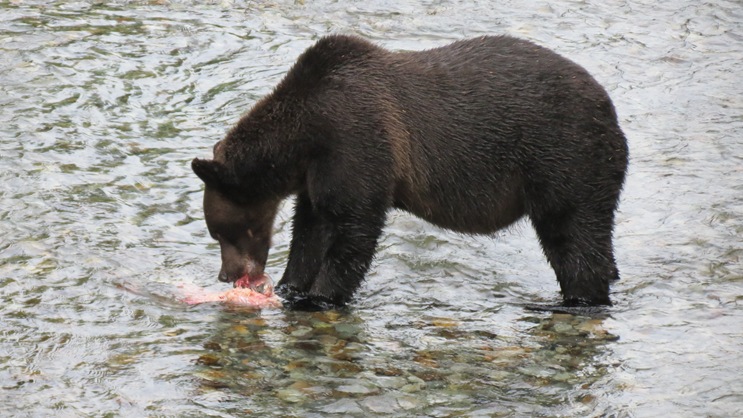 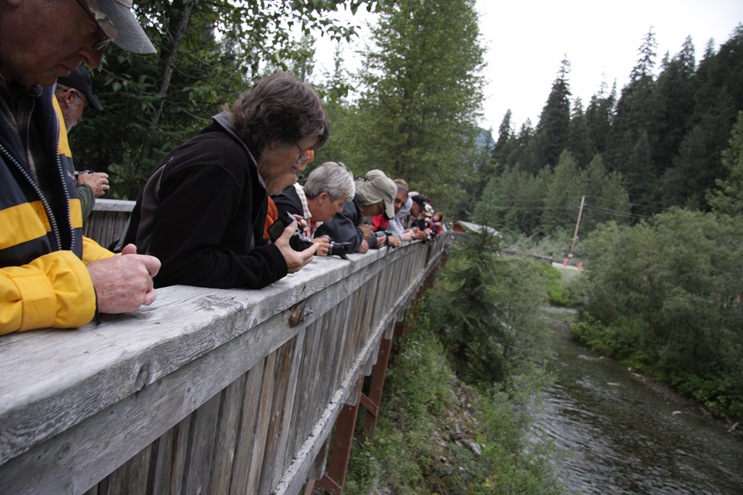 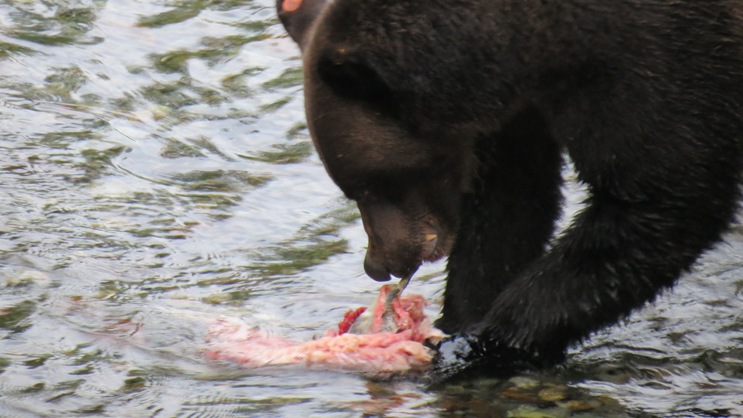 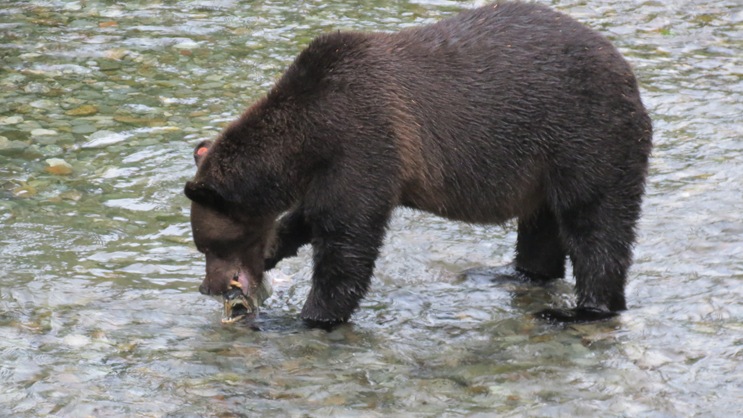 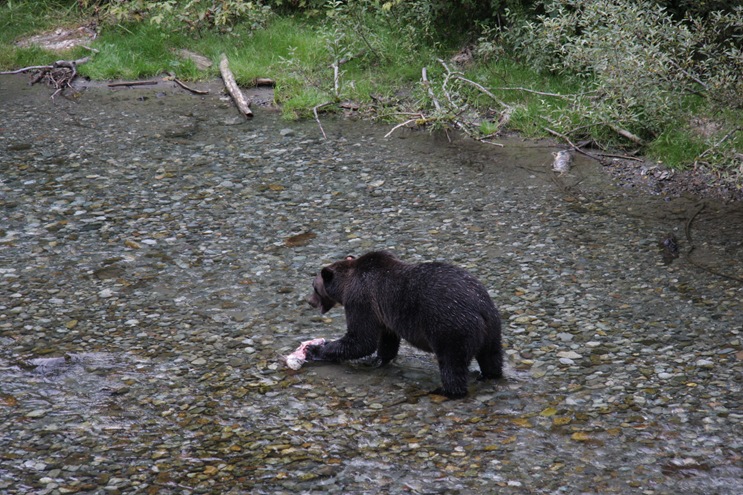 By about 8:15 we had seen enough ripping of flesh and crunching of bone so we headed home.

A lot of other RV’ers seem obsessed with bears. They come here for several days and every morning and evening they are back to watch even if they have already seen a lot of bears. Us. Been there, done that. We won’t be back.

Even worse in my mind was a blog entry I read about being in Stewart. They went up to Salmon Glacier and then on their way back they stopped at Fish Creek. They had exactly 2 picture of the glacier that were almost identical (and lousy) and said hardly anything about it. Yet they had 15 shots of a bear cropped so close that it could easily have been done at a zoo and they were so excited.

On a separate note, it turns out that it was a good thing we went to the glacier yesterday. I heard someone say that they had tried to go today but it was so cloudy that when they got up high, they could barely see the road and had to turn back.

More planning to do tomorrow. It is supposed to rain all day so if we don’t do anything interesting I won’t bother with a blog entry.