We moved a short distance east on the Yellowhead Highway to the town of Hazelton to see the ‘Ksan Historical Village.

It was a cloudy rainy morning so we didn’t see much on the drive. 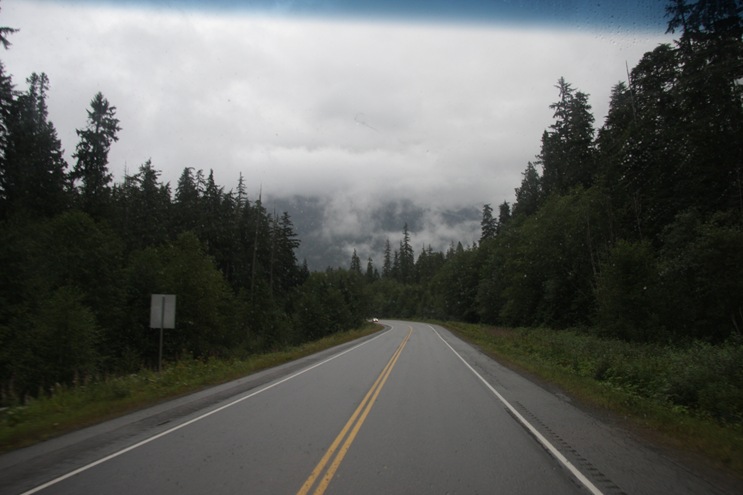 It had mostly cleared up by the time we got to Hazelton and got a spot at the ‘Ksan campground. 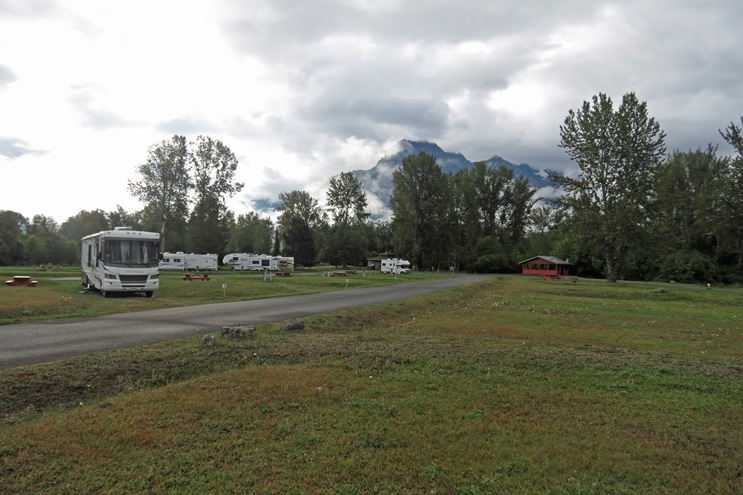 We had lunch and then headed over to the historic village site. 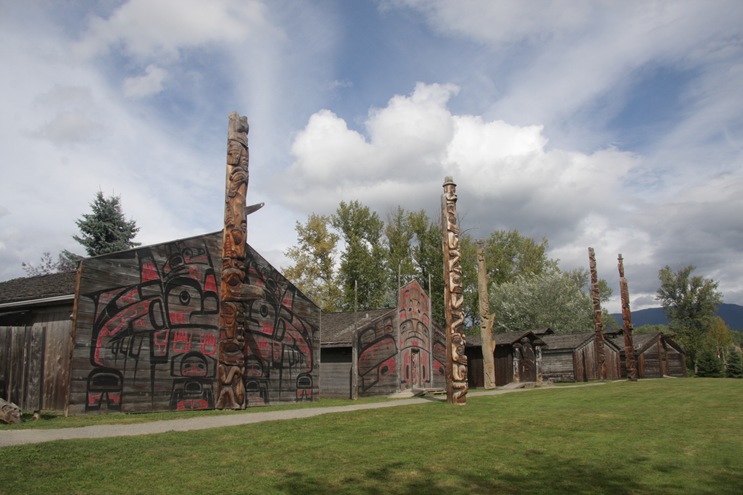 It is a series of longhouses with displayed the lifestyle and culture of the Gitxsan people. To get inside the buildings you have to take a $10 guided tour which we did. Unfortunately they didn’t allow any pictures. The guides really don’t do much. They let you in each building and then start automated audio presentations that explain the rituals and items on display. It was actually pretty well done. The guide would answer questions at the end of each presentation. She was a member of the Fireweed Clan of the Gitxsan and was obviously very proud of her culture.

There were a lot of amazing masks, coats and head pieces. I was definitely worthwhile. I really wish we could have taken some pictures. We were the only ones on our tour. We missed an earlier bus tour and saw another one in the lot later. 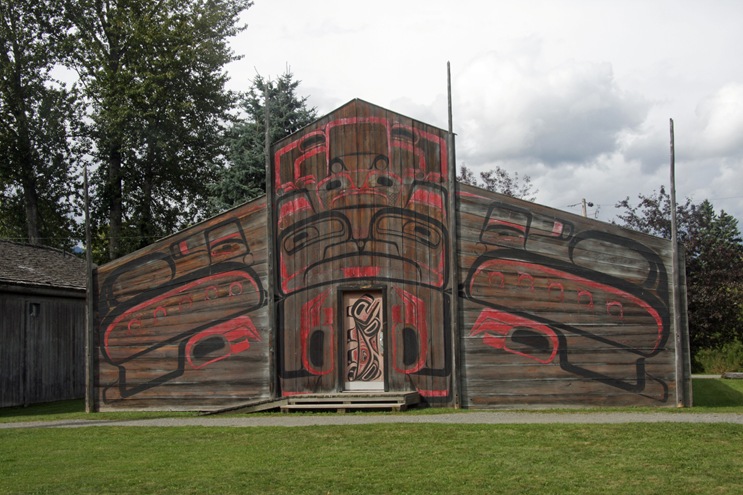 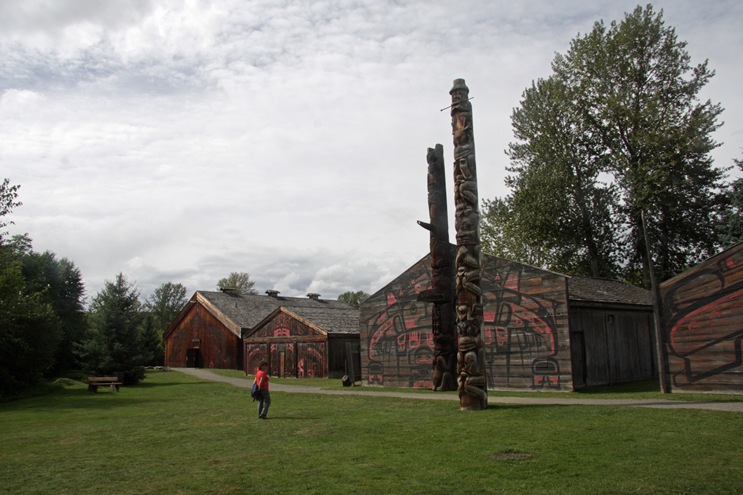 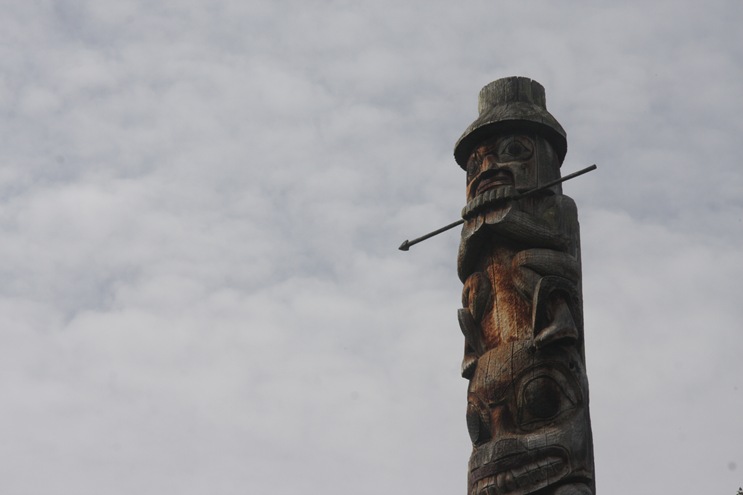 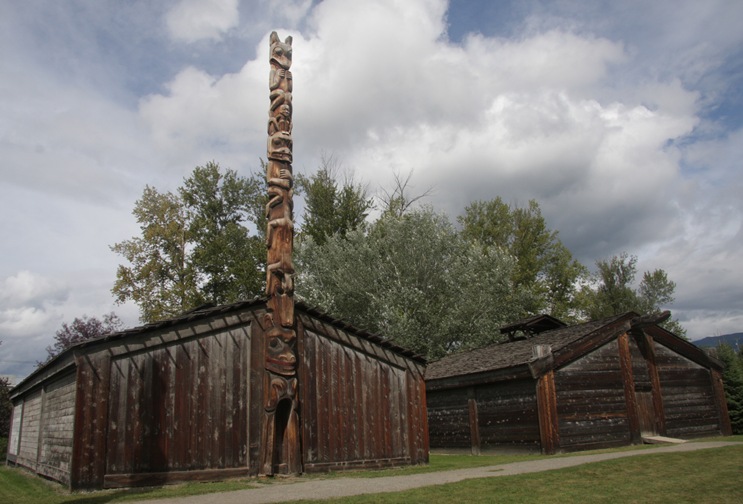 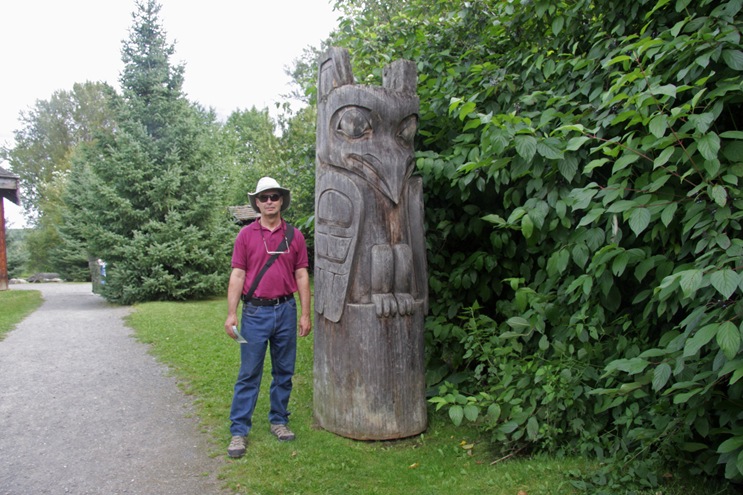 Back at the parking lot we seem to have joined the red car club. We even had red shirts on. 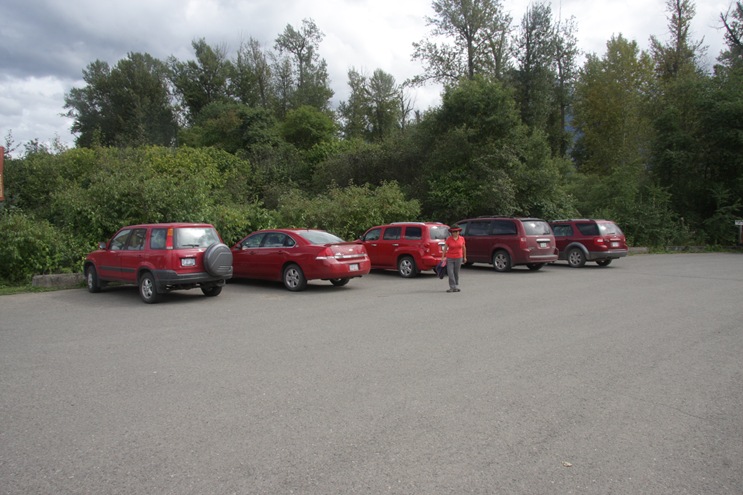 On the way into town is a narrow, one lane, metal grate suspension bridge over a deep gorge. 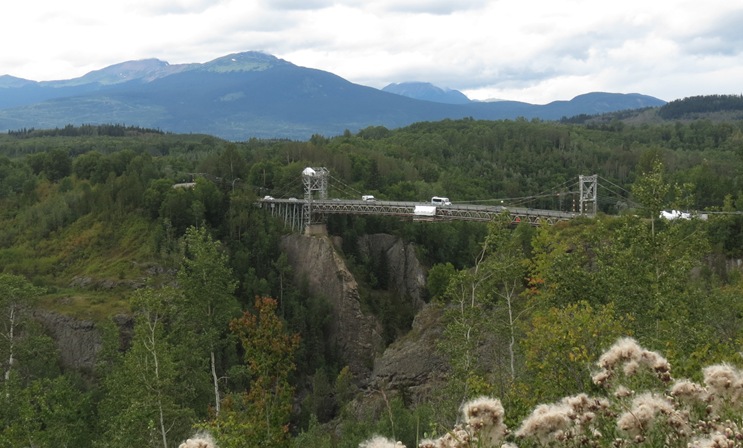 There are working on it but you can walk out so away I went. 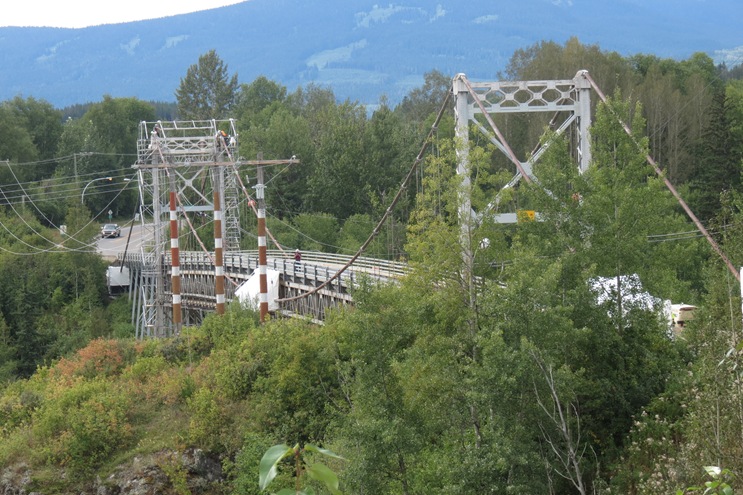 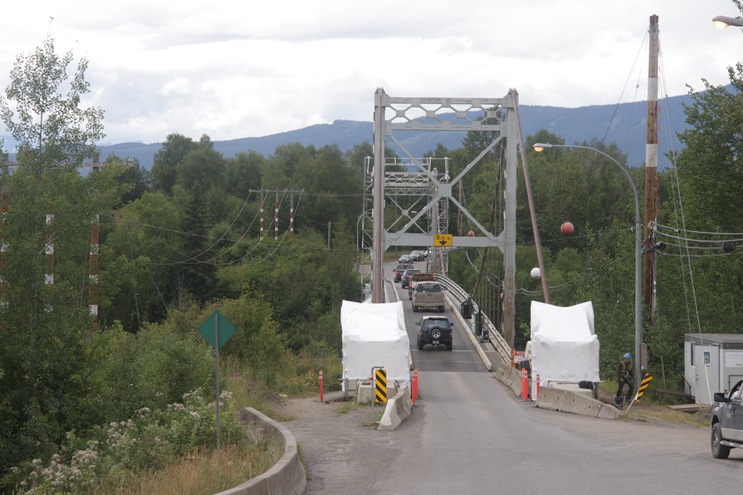 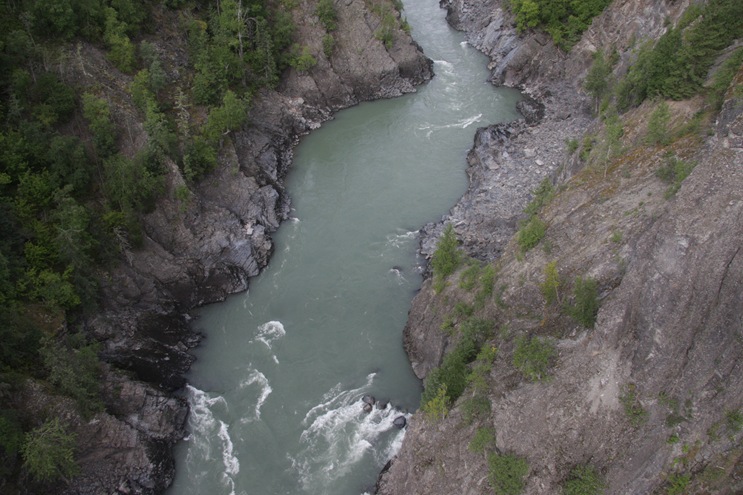 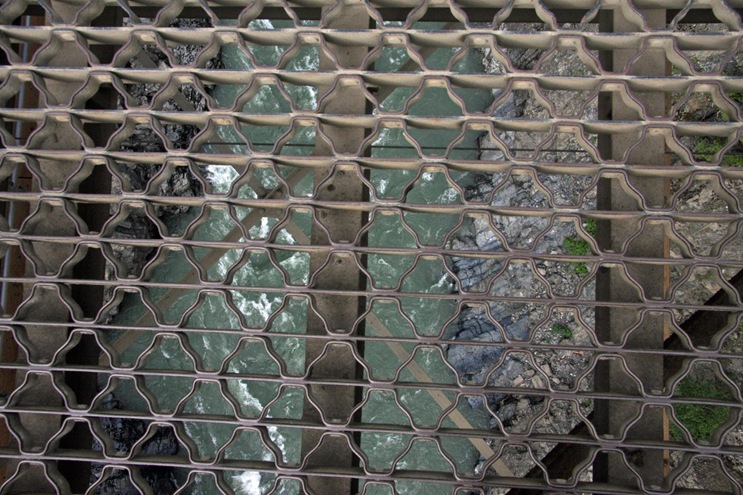 When I was out on the bridge I talked to one of the workers. Before she was going to be allowed to work underneath the bridge deck on the scaffolding, I guess as some sort of initiation, she was going to be lowered from the bridge down to the water and back on a rope. She was looking forward to it. Of course she had already done some bungee jumping and obviously heights did not bother her at all.

Our waterfall quota is way down from last year so we headed off to one near town. 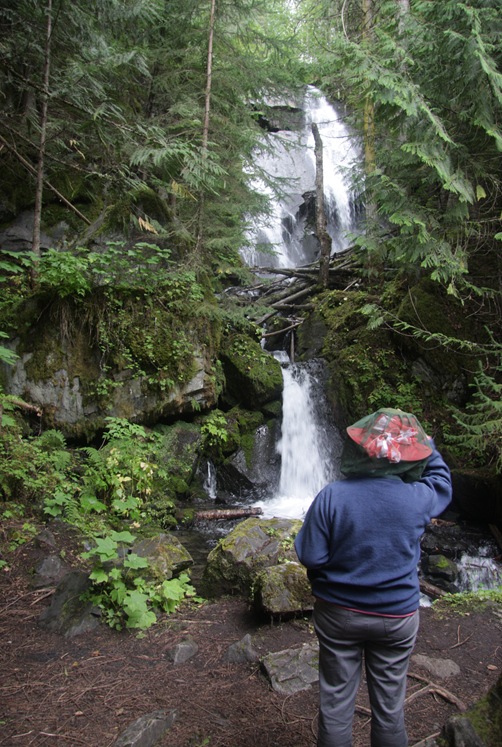 Nice but too many trees in the way, AGAIN! We climbed up a bit higher for a different view. 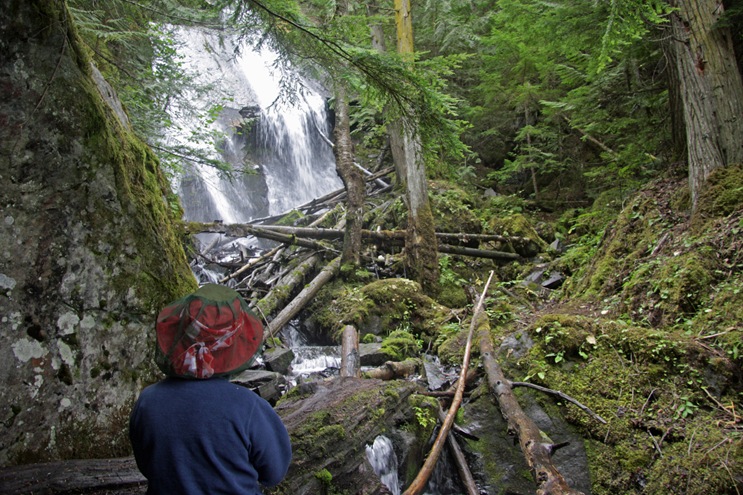 It was getting cooler so we headed back to the RV passing this great flower garden in town. 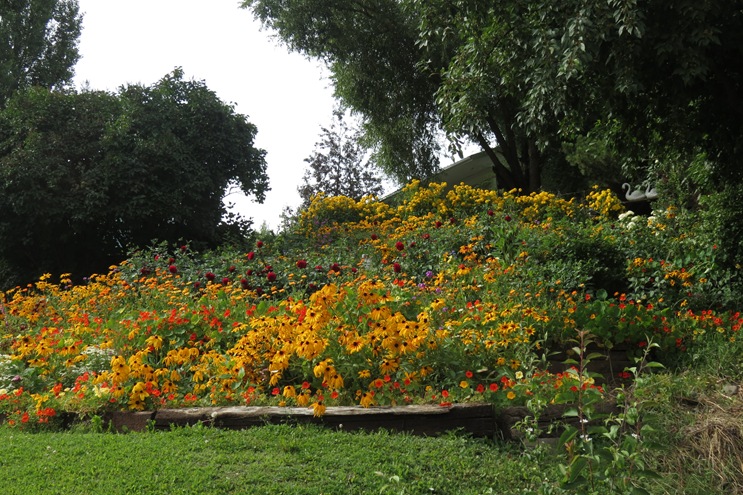 Without the inside pictures at the village, it was not a great picture day.

Another short hop down the highway tomorrow.