I had thought about staying another day in Smithers because there were some other interesting hikes to viewpoints. When we got up it was very cloudy and I didn’t think there would be any view at the points so we moved on.

Another short hop down the highway to Burns Lake. 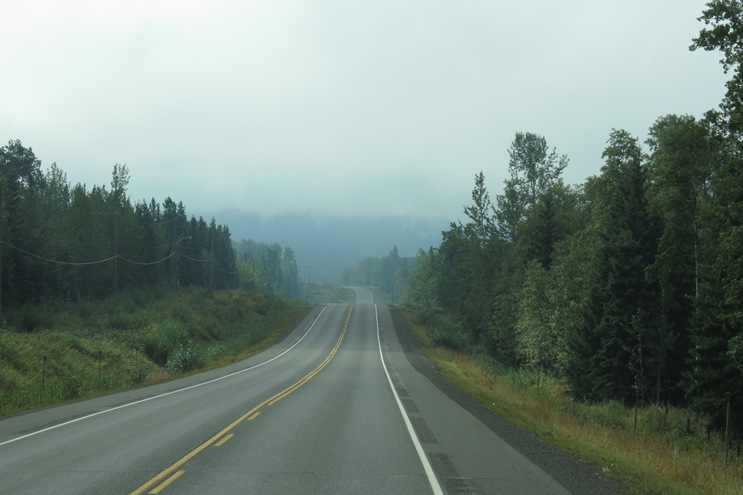 The weather got much nicer soon after we left. We are now in farm country. 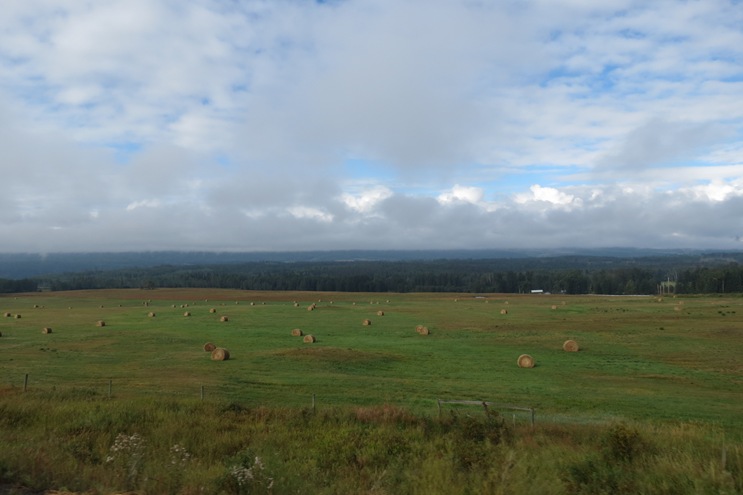 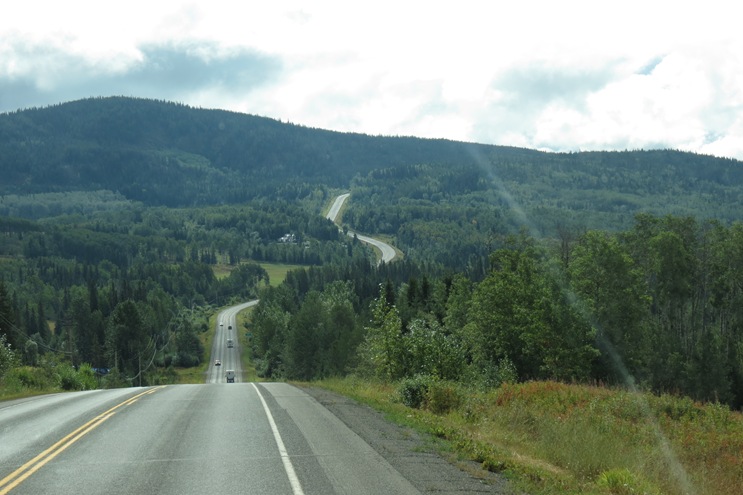 When I was reading the information on the area, Jennie’s eye lit up when we saw a trail called the “Opal / Agate Bed Trail”. Burns Lake also has a free municipal campground so we parked the RV, went to the visitor’s center and headed off. The trail goes to a claim that somebody put in the public domain so anyone can go and keep what they find.

The trail is close to town but you must go 7 km up another dirt road. For a trail that was in all the books and brochures it was kind of rough to get to. 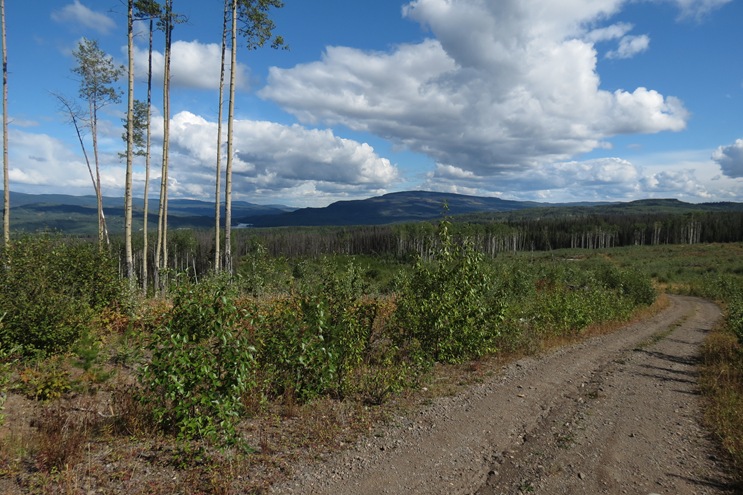 The lady at the visitor’s center had said that the trail had not been maintained this year and was rather overgrown. She tried to steer us to another trail but we were determined. She wasn’t kidding. It’s a good thing there were blazes on the trees. 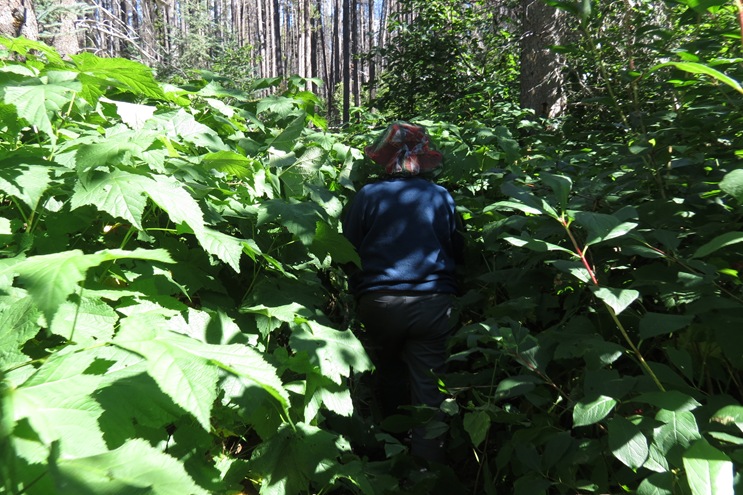 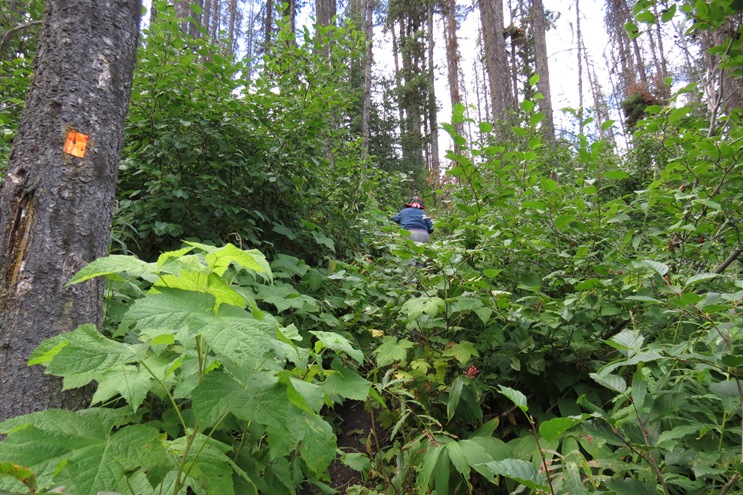 After a steep climb we got up to this viewpoint of the town back down in the valley. You can really see all the dead trees caused by the spruce beetle. 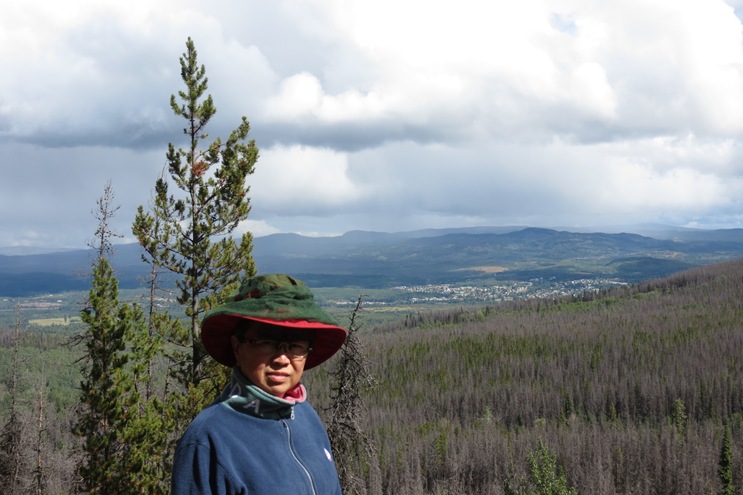 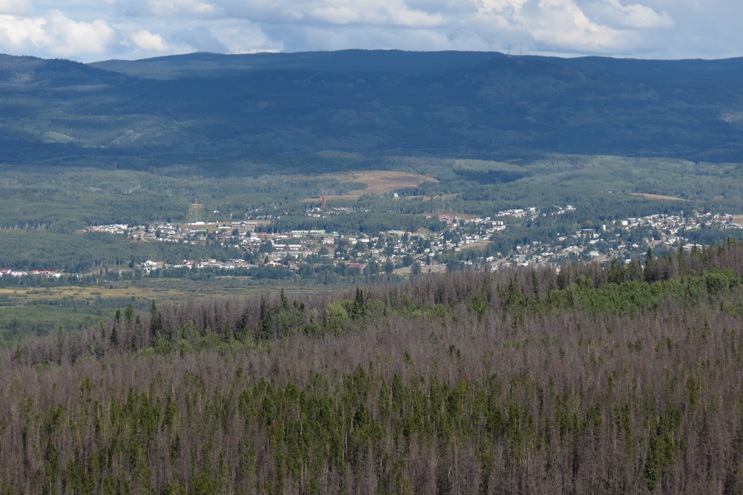 I got a little confused as to where we were here. The trail is 1.8 km long but with all the twists and turns we had no idea how far we had gone. The map and description in the brochure were not very clear. They said the beds were next to a creek. We were now next to a deep valley which seemed to have a creek and there were lots of rock lying around. We thought we were done but the trail continued so, so did we. It went on a long way and through a bog with no rocks at all. 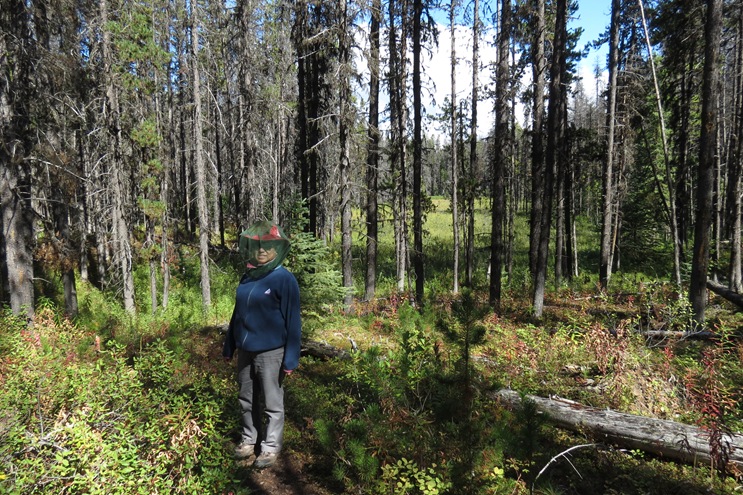 We almost turned back several times but finally got to the real opal beds. When I finally figured out the map, the viewpoint of town was only about 1/2 way. I think I see a GPS for hiking in our future.

This is what we found. 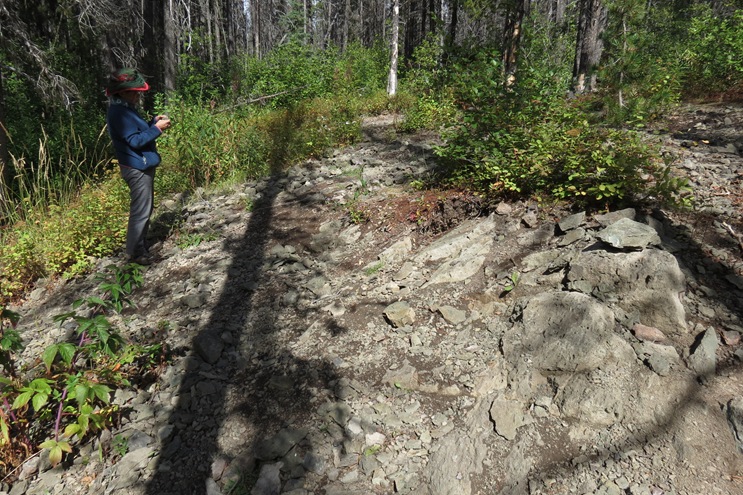 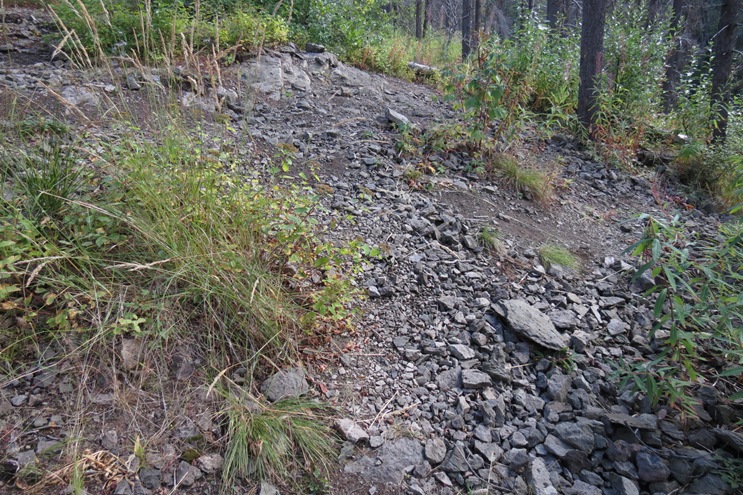 Now we knew before we even started that we were not going to find any opals because we had no idea what we were looking for. Still, Jennie had fun picking through the rocks.

The creek was way down in the valley so we didn’t even try to go down. 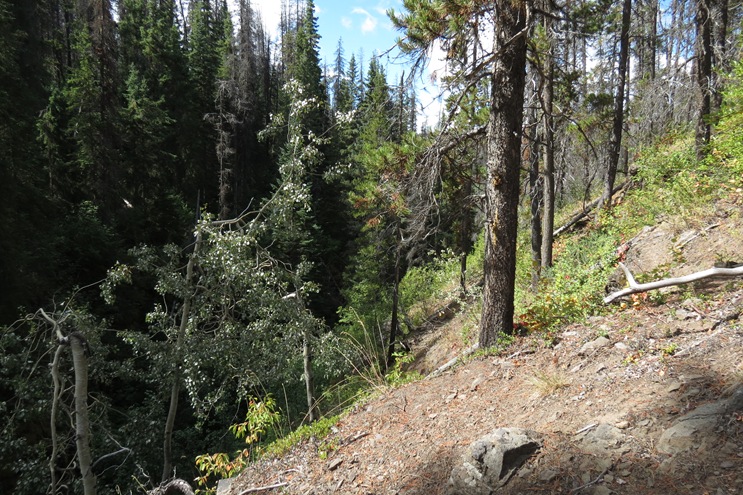 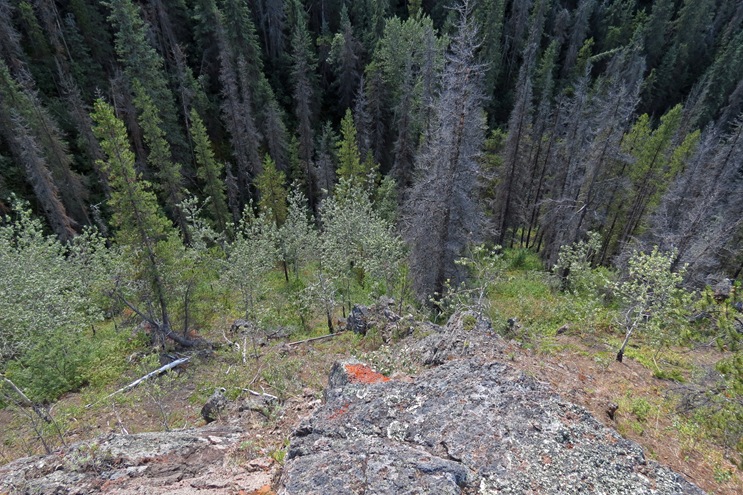 There were some interesting rock formation on the cliff farther out the valley. 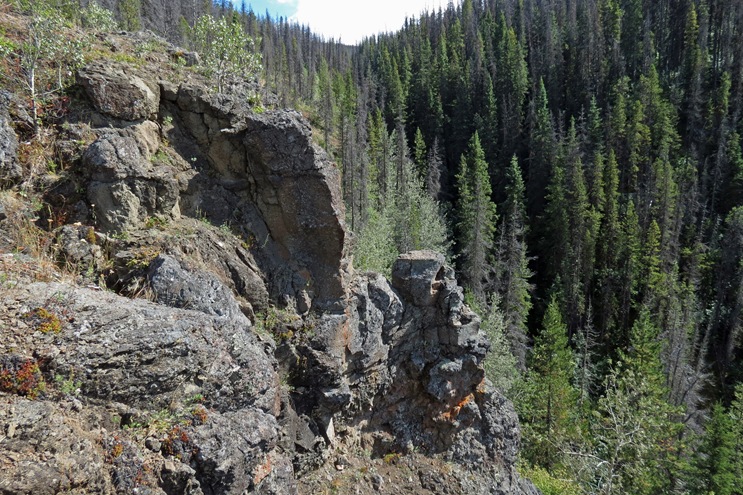 And a view of the mostly dead forest off into the distance. 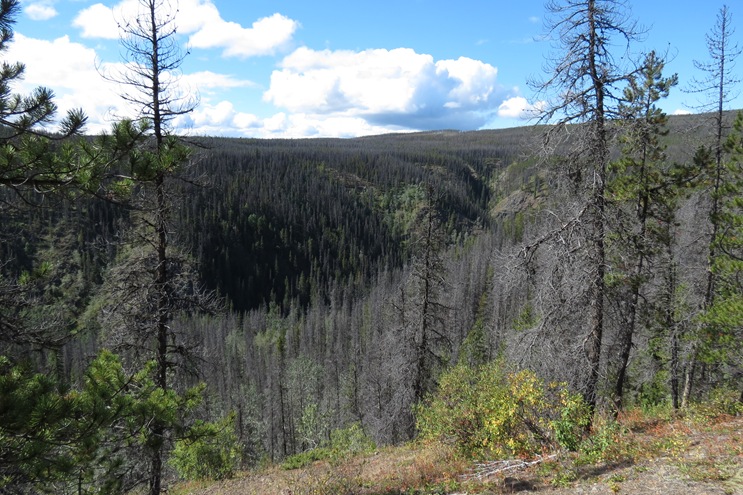 Jennie collected a few possibilities and we headed back. It was bit tougher hike than we planned and than it sounded from the description but it was a really nice day out and we needed the exercise. 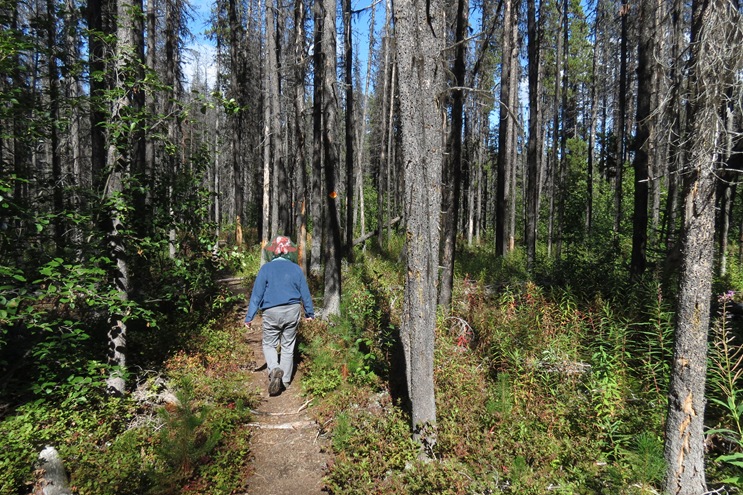 On the way back we actually passed some forest service guys clearing the path with large weed whackers. It seemed kind of silly to clear it so late in the season when it will just be overgrown next spring for the summer. 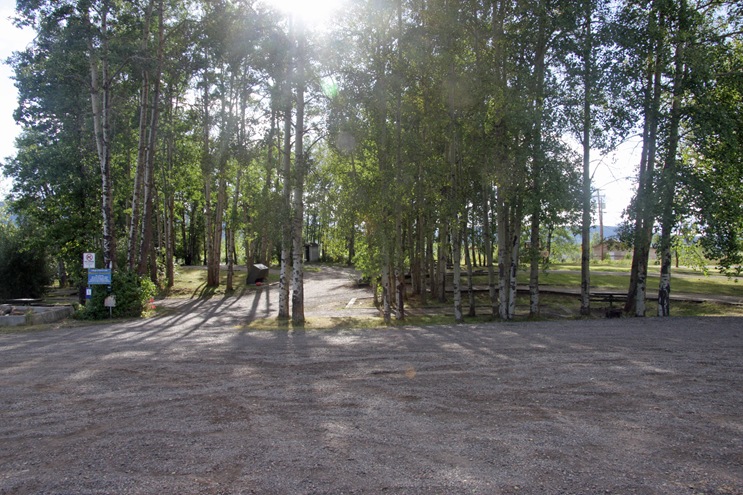 We actually setup in the parking lot because the sites were a bit small for us, we wanted to be out in the open for the solar panels and the satellite dish and the view was much better. 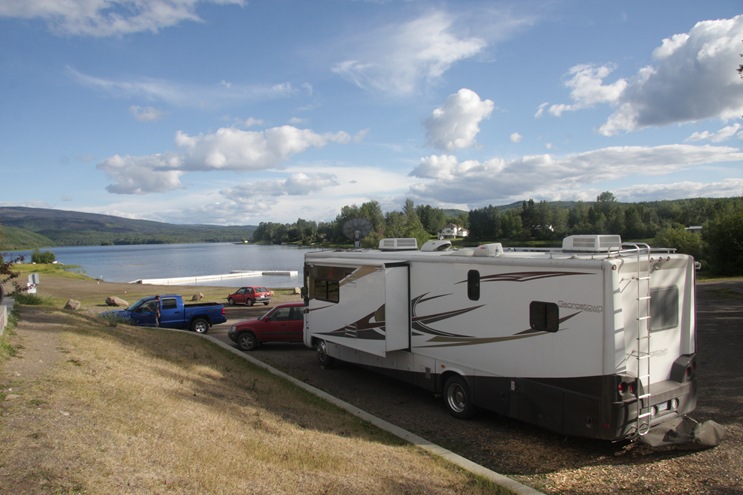 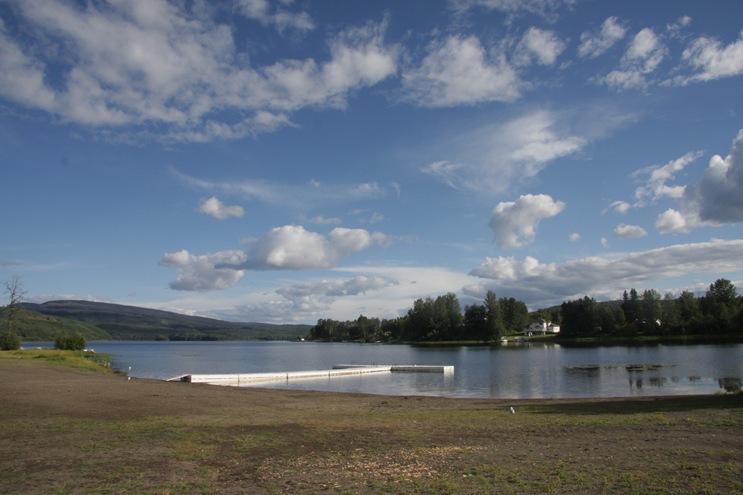 Right next to us is a skateboard, bicycle park. 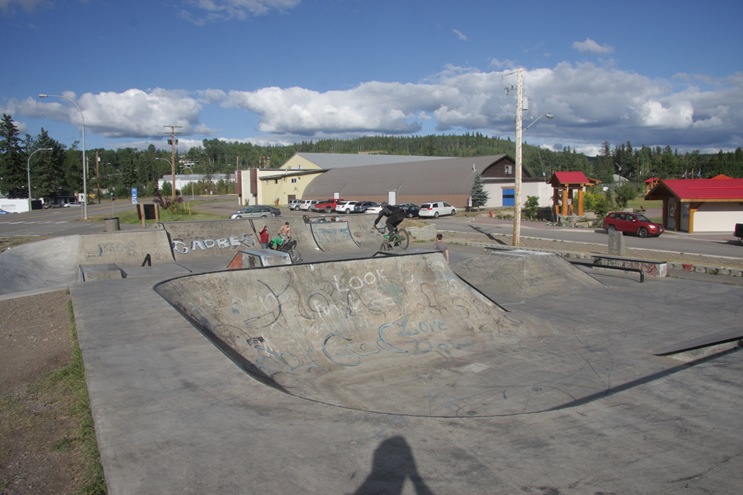 Long ago when my parents rented an RV and went out west with my youngest brother and sister, they had to stop at every skateboard park for my brother. I wonder if this one was here and if they stopped.

BTW my other brother and I were kind of annoyed that we missed the trip but we were in university and had summer jobs that we couldn’t get out of.

We have been going really slowly along this section of the highway because I could only get reservations for an electrical site at Jasper National Park starting on Sep 3rd. I wanted an electrical site because we are going to be there for a while and in the trees the solar panels wouldn’t work very well. We have seen a few good things we otherwise would have just gone by and it’s good to be thorough so no complaints.

I’m still not sure where we are going tomorrow.