May 10 – And More Waterfalls

Two more easy hikes and some more waterfalls. The hardest part today was getting to the trailheads as they were on some forest service dirt roads in the Pisgah National Forest.

Being harder to get to meant they were also less busy. We saw 2 people at the first falls and they only stayed about 5 minutes. At the second we only saw one other group and they were going in just as we were leaving.

First up was Jackson Falls. There are almost no trail markings in the nation forest. My guide book had GPS co-ordinates for the trailhead. When we arrived there was just a small parking lot with no signs. A bit into the trail, at a fork, this was the only sign that we saw. 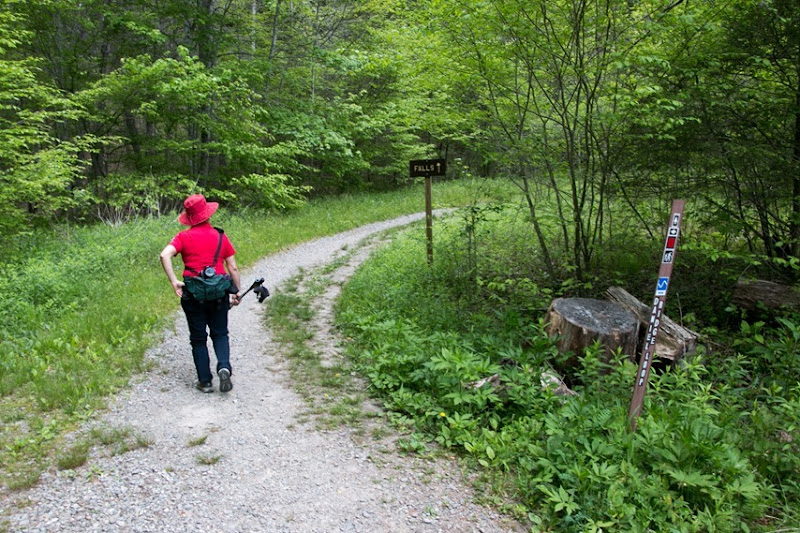 The trail was an easy, wide and almost flat old roadway. It was only about 0.8 miles out and back.

There was some interesting foliage along the way. 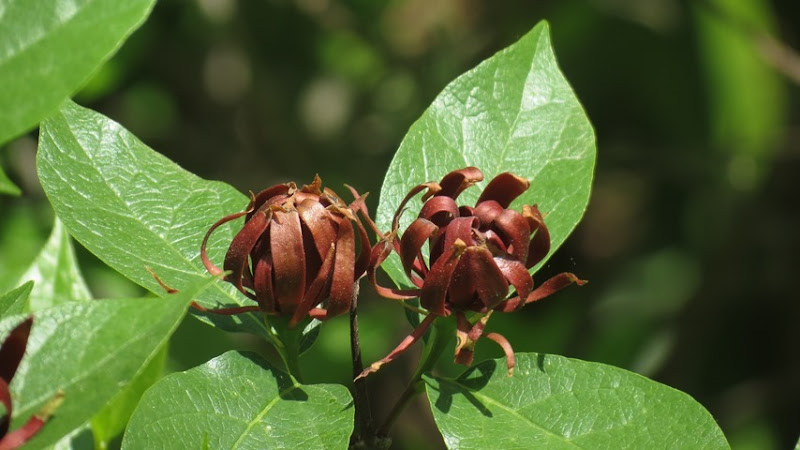 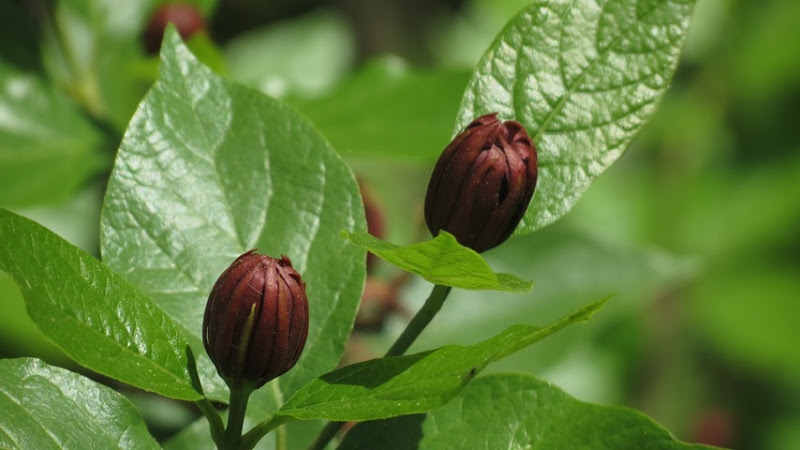 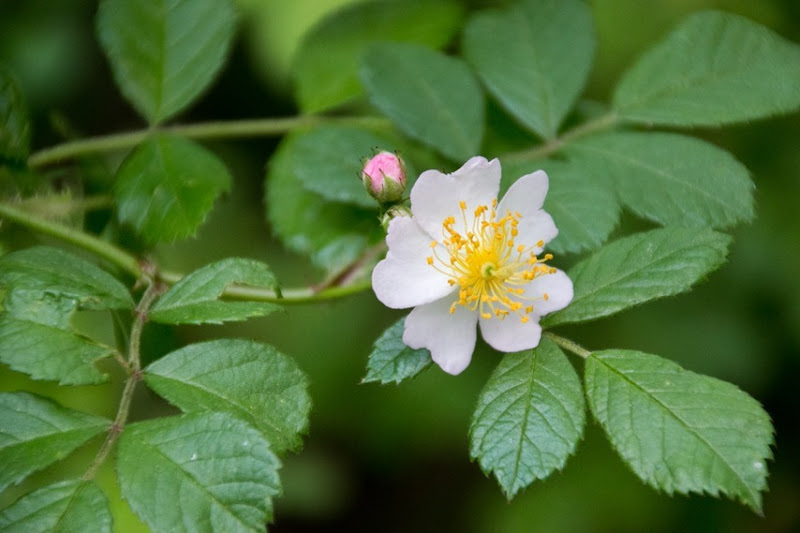 This tree had the weirdest little ball on it. 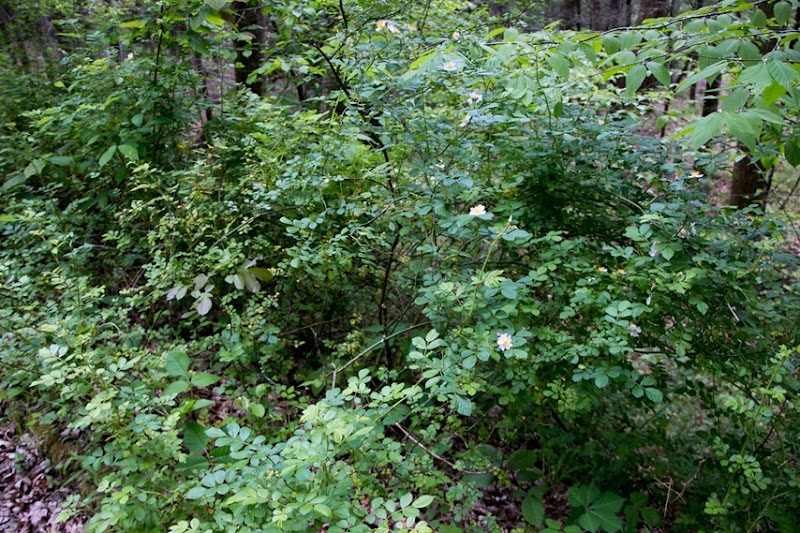 It was about an inch across and there was only one. 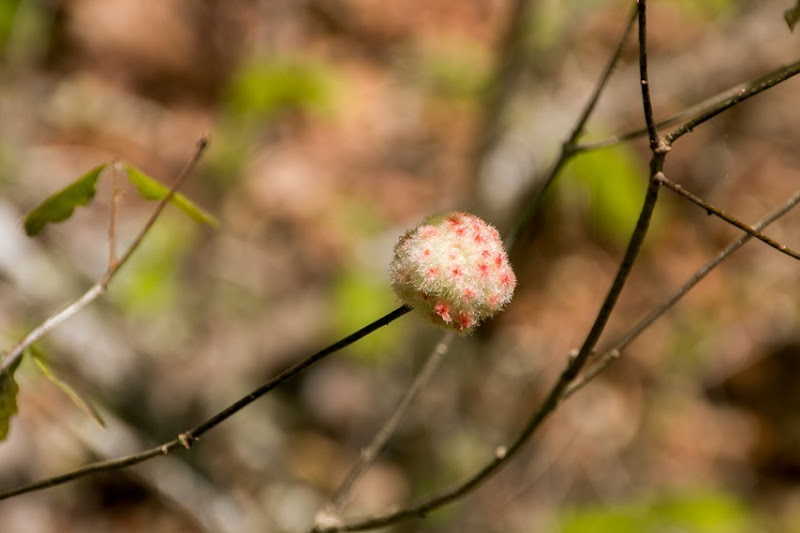 Jackson falls are 150 feet high and cascade down a massive near vertical rock face. The pictures just can’t capture how huge it looked. This is the view from the trail with Jennie in the red shirt up near the base. 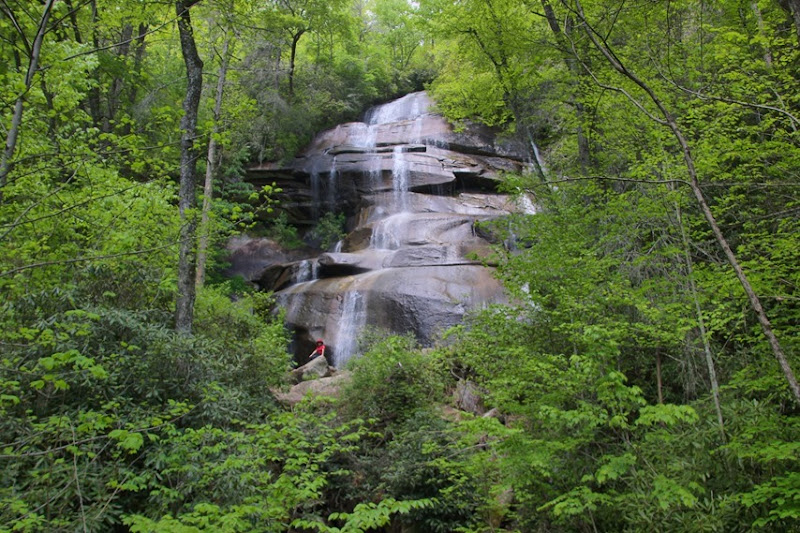 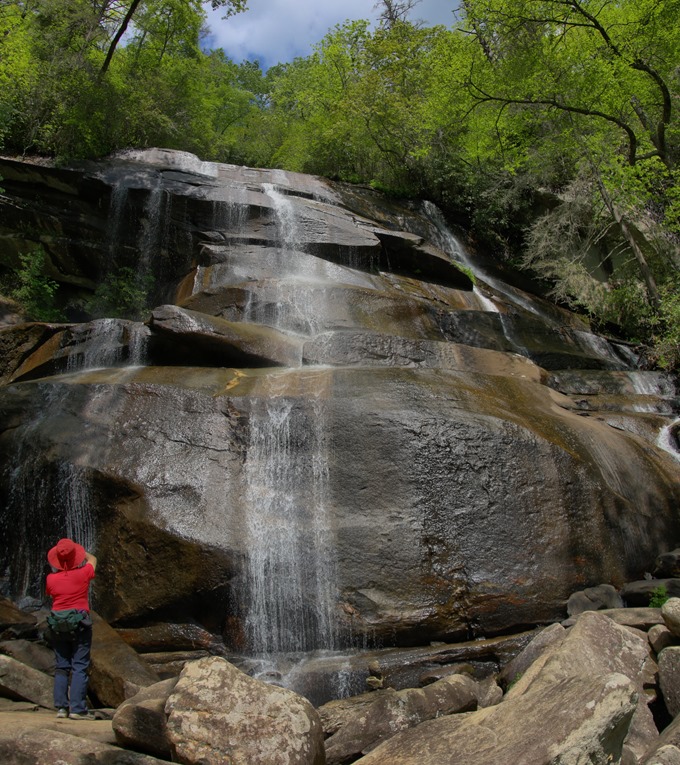 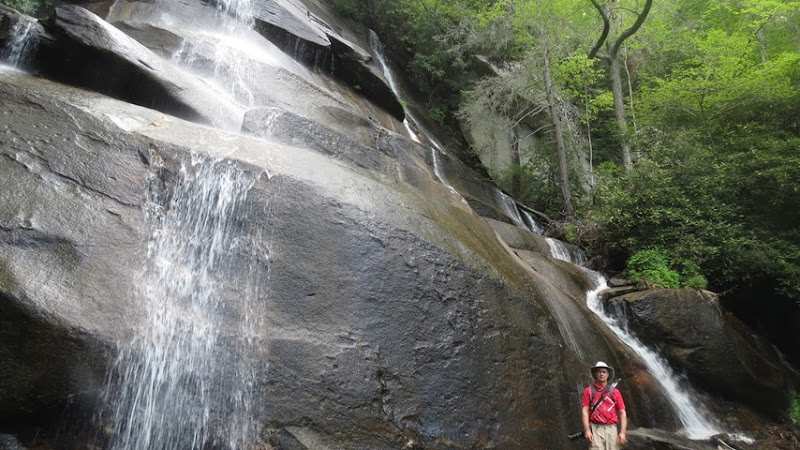 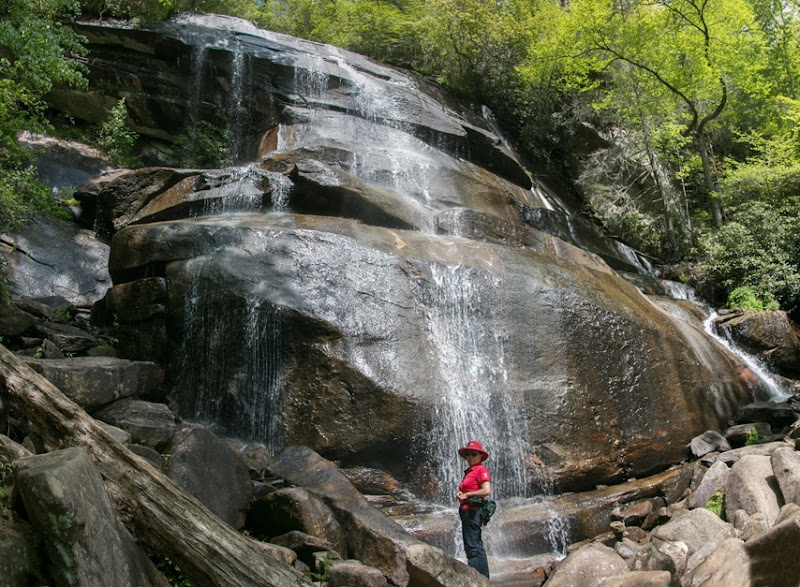 One interesting section had this set of parallel rivulets. 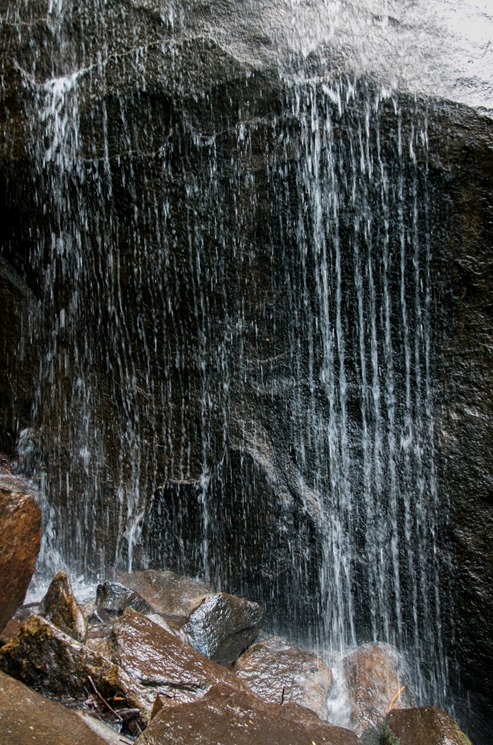 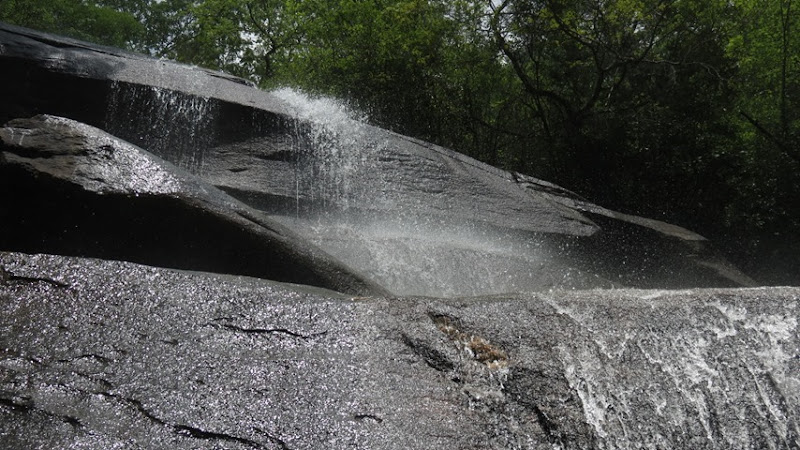 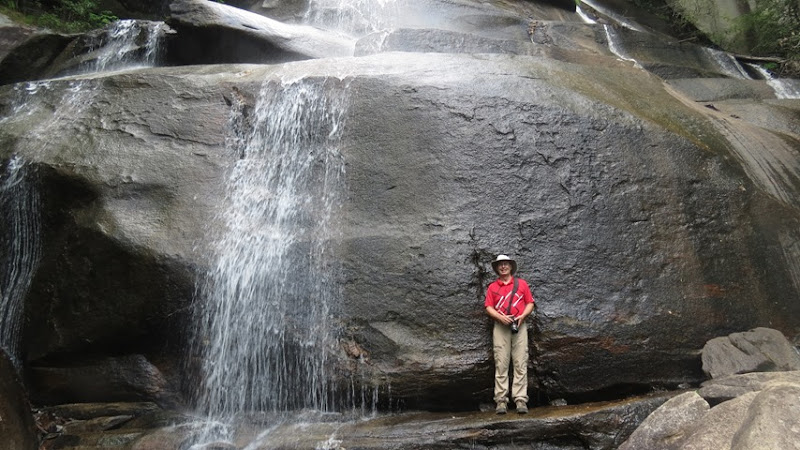 This is one where you have to be there to get the true feel for the place.

Next up was Courthouse Falls. Again I used the GPS co-ordinates to get there. When the GPS told me to turn off the highway on to the little dirt road with a “Dead End” sign I had to stop and check the directions in the guide book. The only indication that it was the right road was the very small forest service road number sign. In we go for about 4 miles.

On the way out we met a car coming in. They too were unsure about the road and asked us for confirmation. 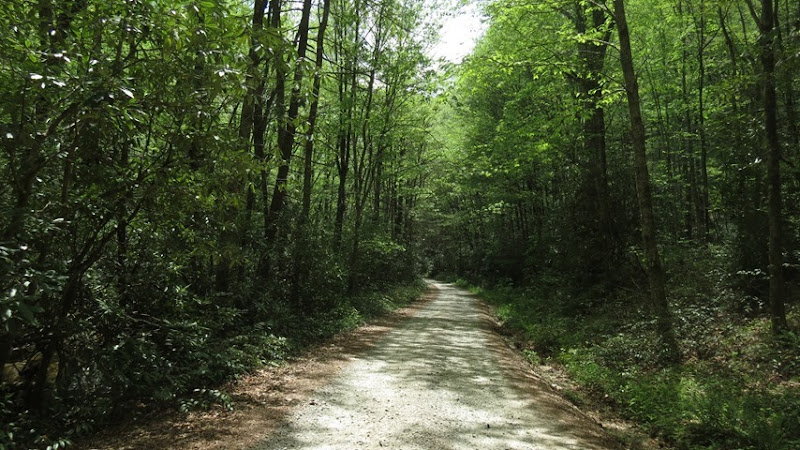 The road was rocky and had some pretty good ruts. I saw one rock that looked like it had scraped the bottom of a car.

This was the trailhead. Can you see the sign at the start of the trail. Thank goodness for GPS. 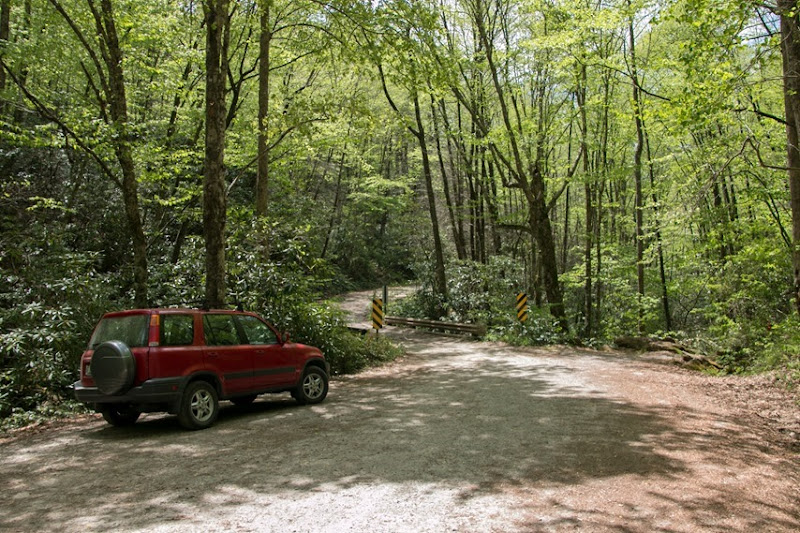 Another very short, at 0.7 miles return and very flat trail. 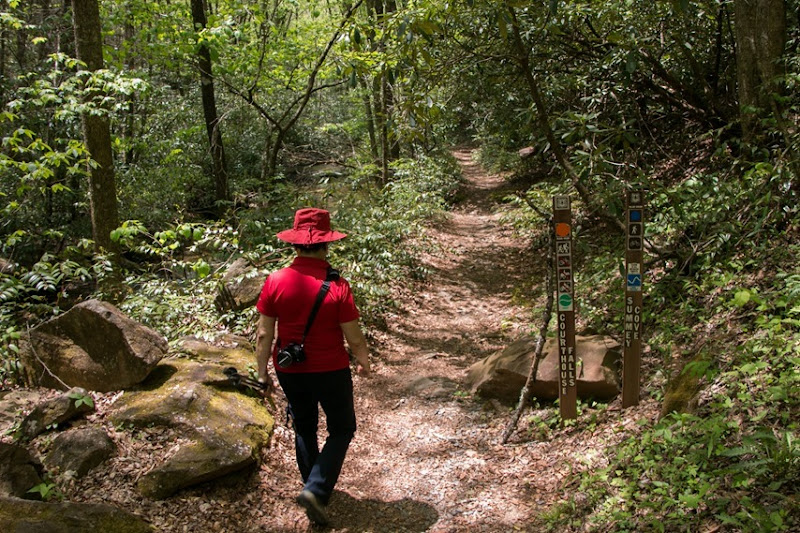 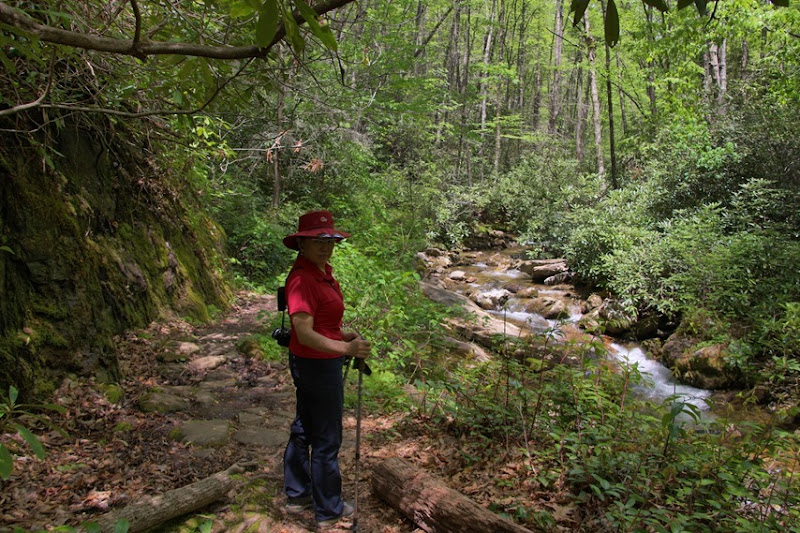 Only at the very end did we have to climb down to the base of the falls. 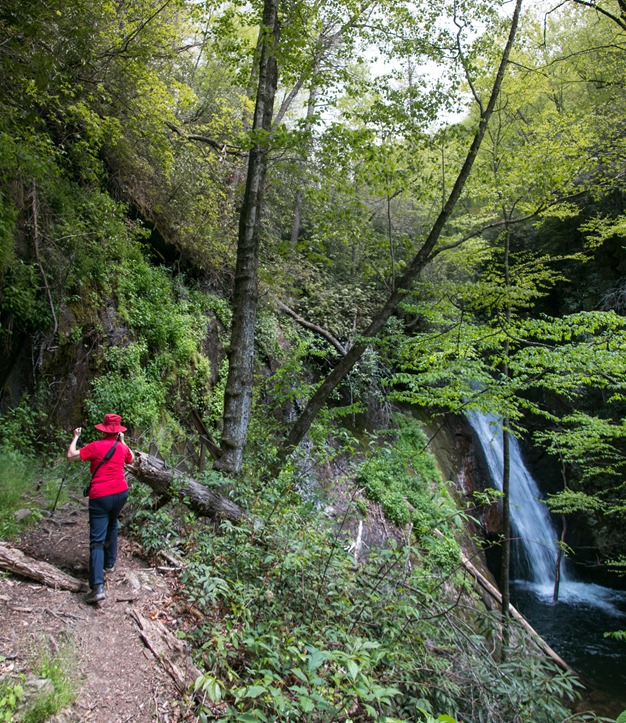 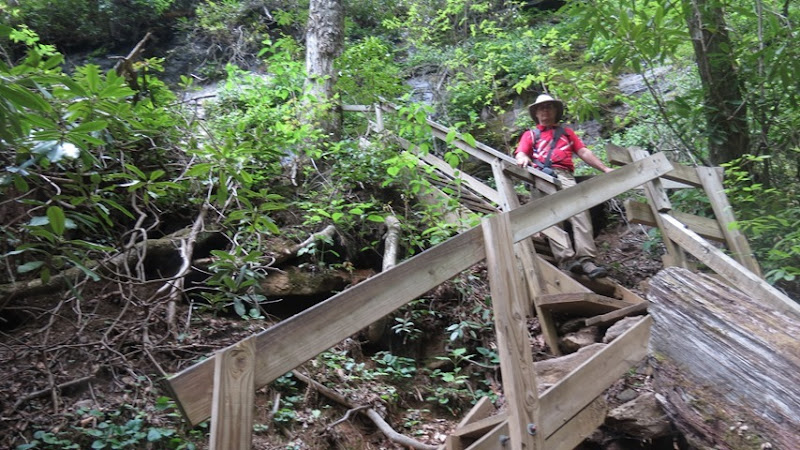 The falls are about 45 feet tall. 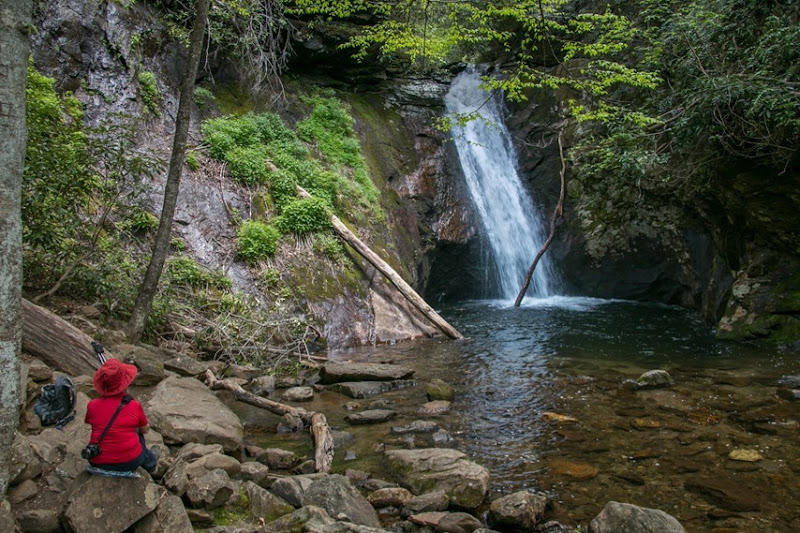 We were actually a bit underwhelmed. The guidebook had rated Jackson Falls “very good” and this one “Excellent” and that it was one of their favourites.

The setting was nice but you couldn’t really go anywhere else other than where we were sitting. We would have liked to get closer. I did get a bit farther downstream but it was slippery and I almost went in. 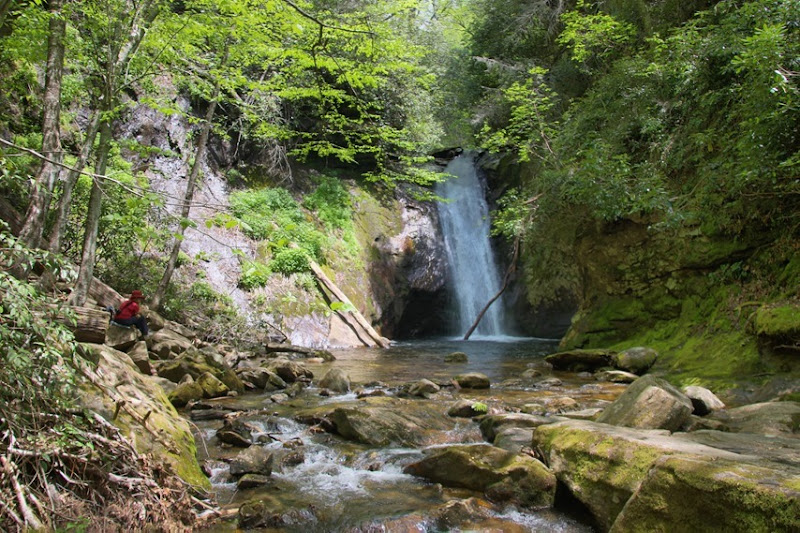 We had lunch and then left. On the path back I noticed a very steep side trail down to near the top of the falls. The people that had come in after we left were now wading around in the water. 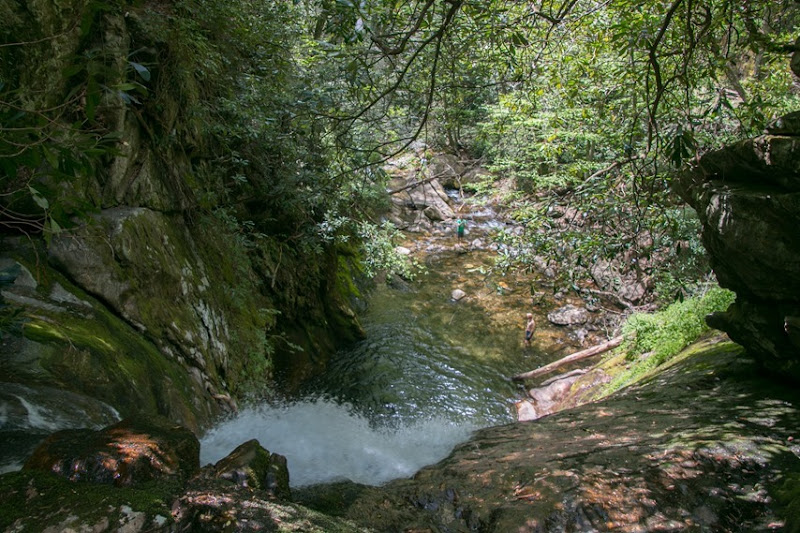 On the way back home I remembered that there was a set of 5 falls, very close together, right beside the highway so we stopped for quick look. Not quick enough it turned out.

The falls are on the private property of a place called The Living Water Ministry. They allow people to look at the falls at their own risk. We parked at the side of the road and took the path down to the water. 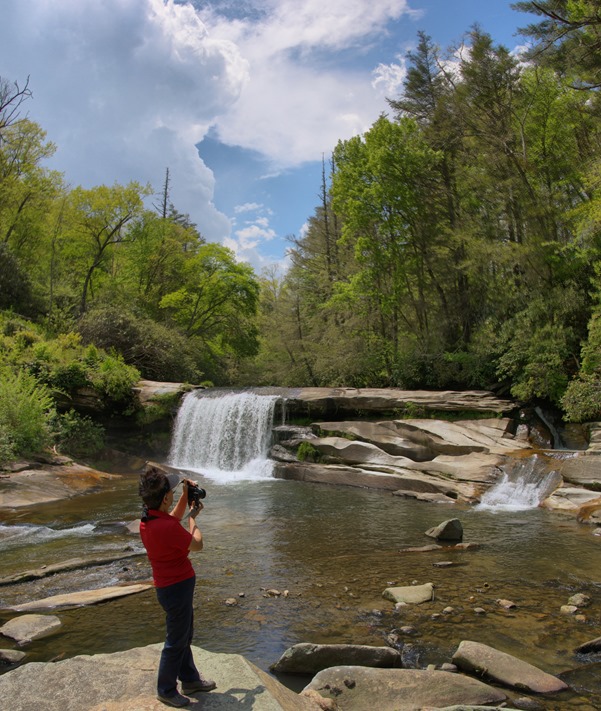 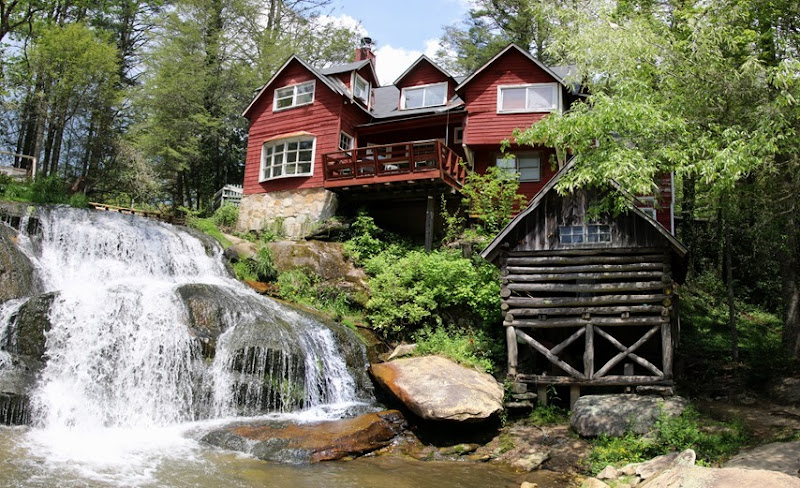 Then we walked along the shore to the rest of the falls. End to end the trails is only 0.2 miles. 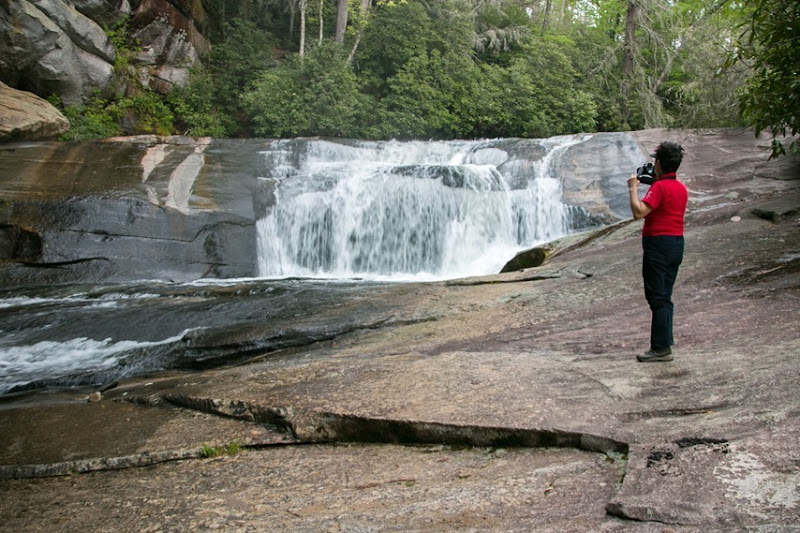 The final falls were beneath a massive cliff and undercut. 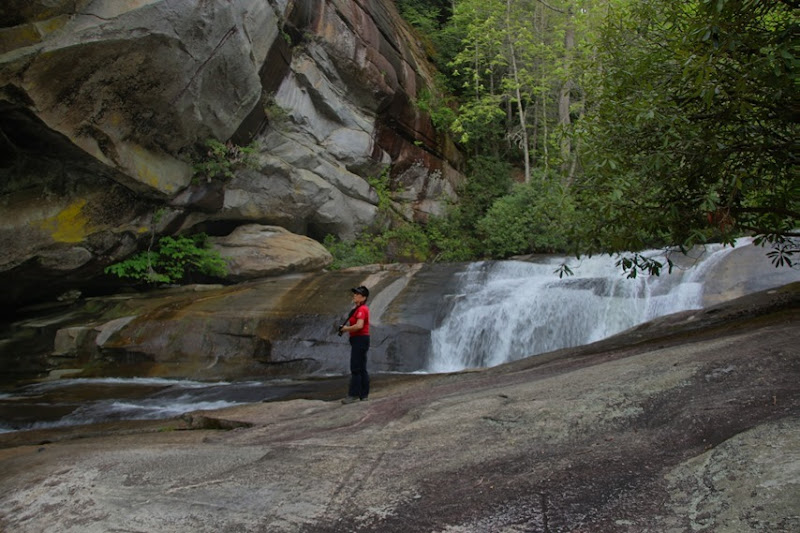 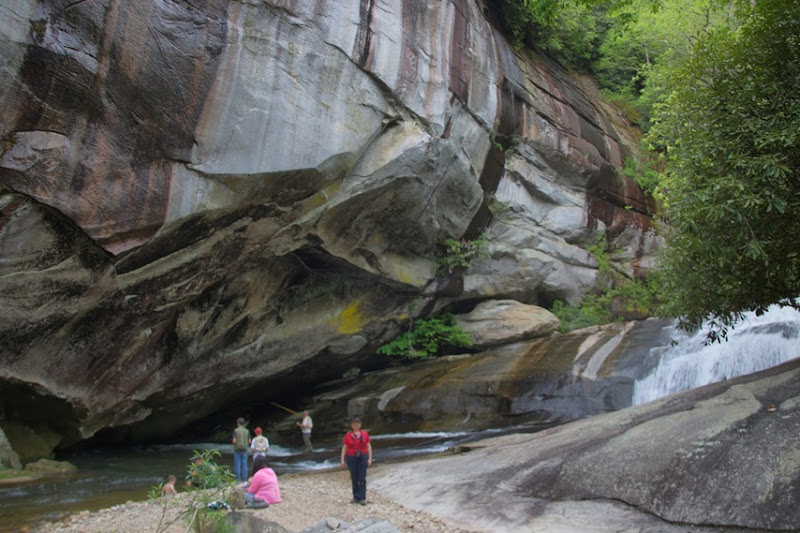 We had noticed that the sky was darkening and had felt a few drops here. Initially we had attributed to drops from the cliff. When we realized that it was time to exit stage left, it was too late. We got pretty wet even on the short jog back to the car. 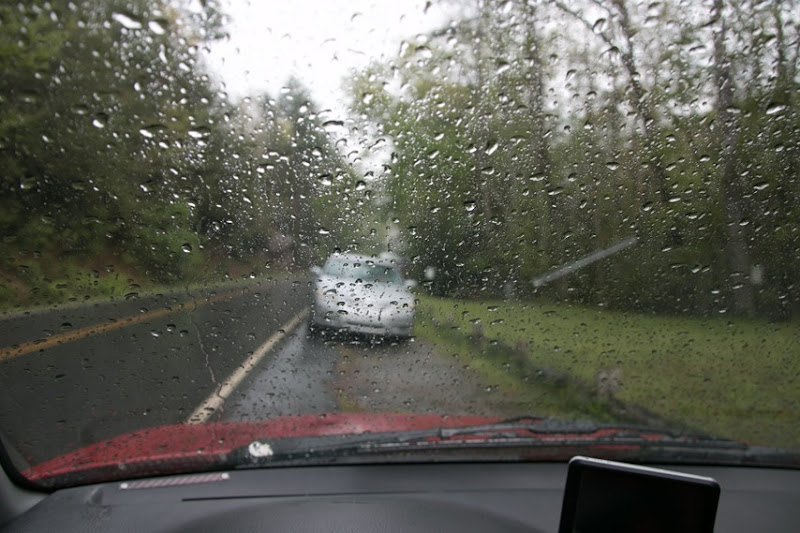 After we got back to the RV I made a Skype call to my mother and then we talked to our daughters.

We think we will go out to dinner tomorrow. We plan to take the day off and maybe scout out some places in town.