Yesterday was a much needed day of rest.

The forecast called for a sunny day. When we got up is was very foggy around the campground. It turned out that it was very local. 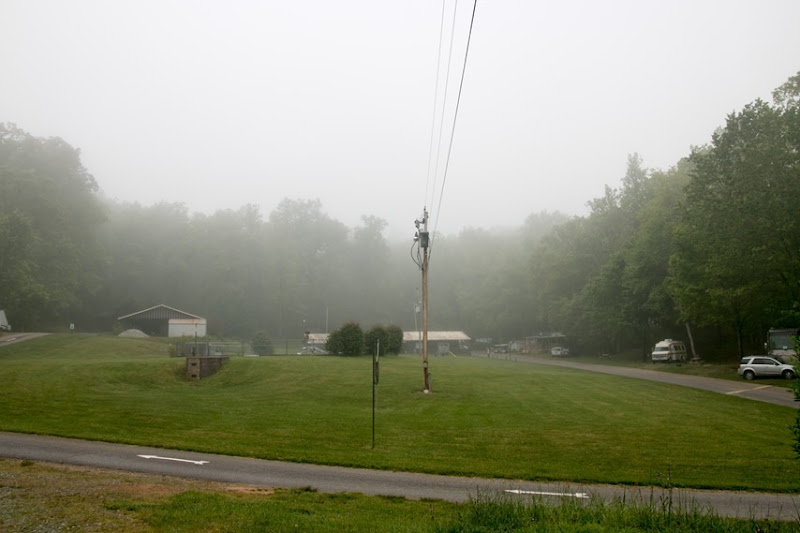 We had done everything on my “wanted to do” list on this side of the park and the road to Grotto Falls, that we missed on the other side, was now open so off we went. Even though it is only a 40 mile drive it took about 1 1/2 hours to get there.

The trailhead is located on the Roaring Fork Motor Nature Trail. It is a single lane one way road that winds its way through the forest and along a creek gorge. 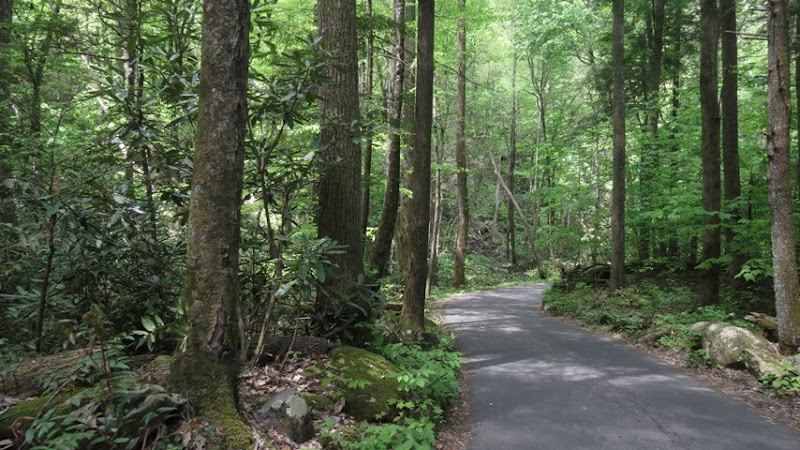 I figured that the trail would be busy because the road just opened so we tried to be early but only managed to get there by 10 am. The parking lot was full as well as the roadside for about a hundred yards after it. When we got back at around 1 pm I would guess that there were about 50 cars lining the narrow road. 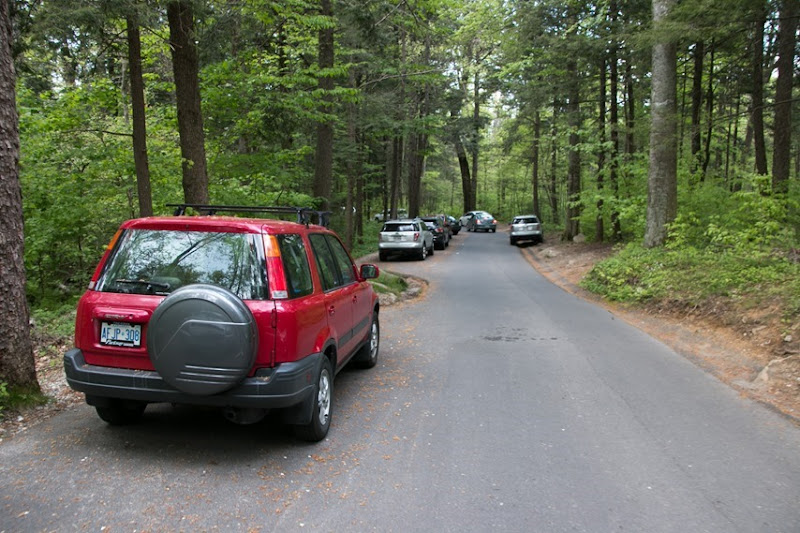 This trail was the busiest of any we have done this year. I think there must be some kind of holiday here because this is the first time we have seen a lot of families with young kids. And I do mean a lot.

Our timing was pretty good though. Going in we didn’t see that many people. This trail also goes to the top of Mount Le Conte so I think everyone going to the top got away earlier than us. At the waterfall, at first, there were only a few people. We actually had the place to ourselves for about 15 minutes. Then just before lunch the hordes descended. We stayed for a short while and then left.

The trail is an easy 1.5 miles one way and 600 foot gain, into the falls. It climbs up along the edge of a hill. We were constantly veering into a valley, crossing a small creek, then coming back out to go around a corner to then next valley. Jennie commented that it was like a line at Disney World. You always think that the end of the line is just around that next corner that you can’t see past. 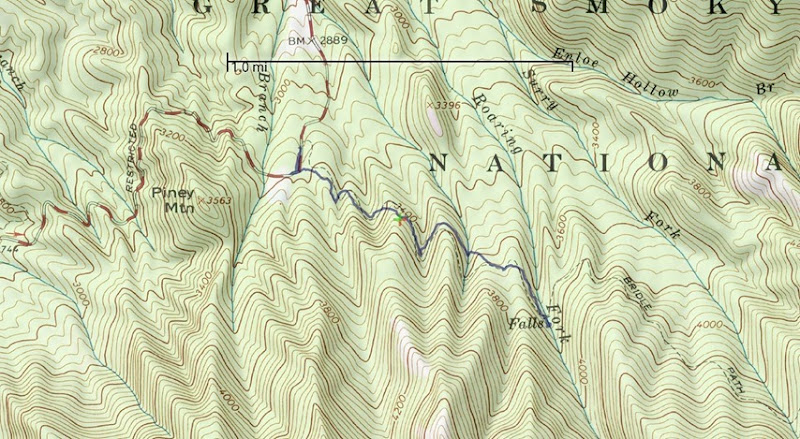 Nice and wide and mostly smooth. Easy for all the small kids. 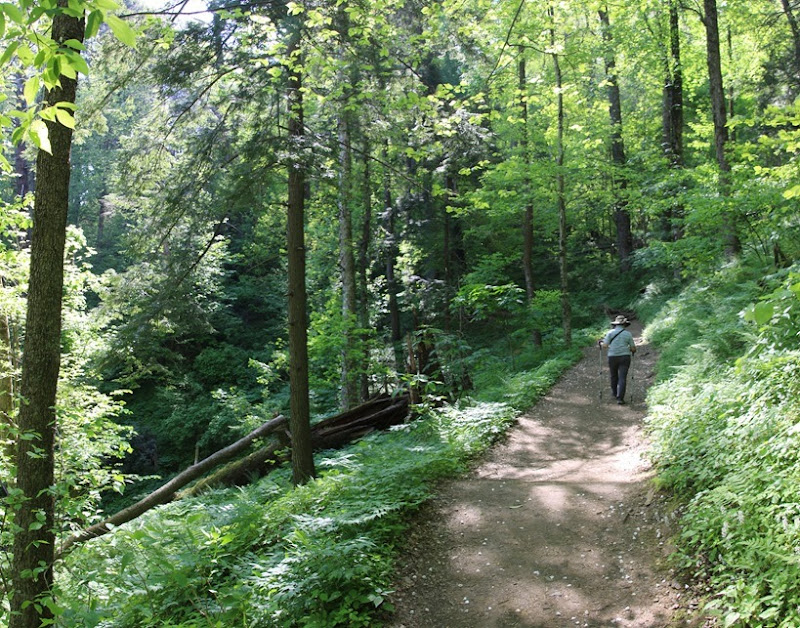 I love the root patterns. 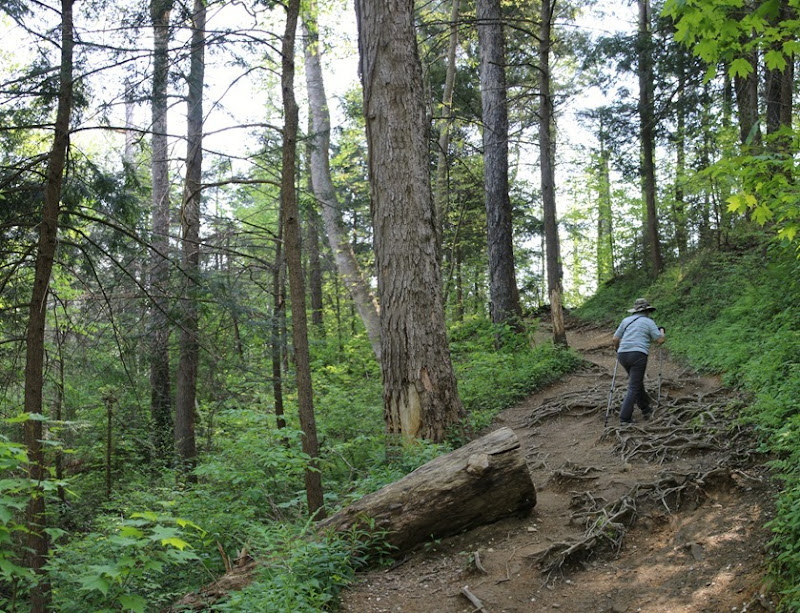 We saw our first magnolia in bloom. Jennie said it was an Umbrella Magnolia. It looked kind of sparse. 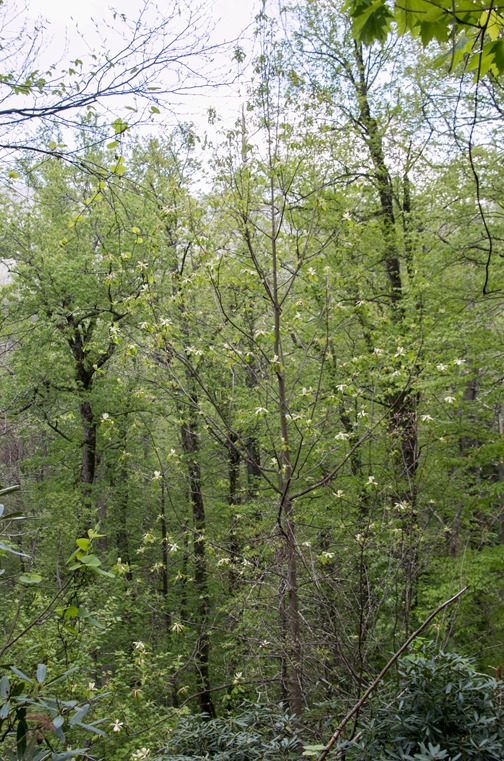 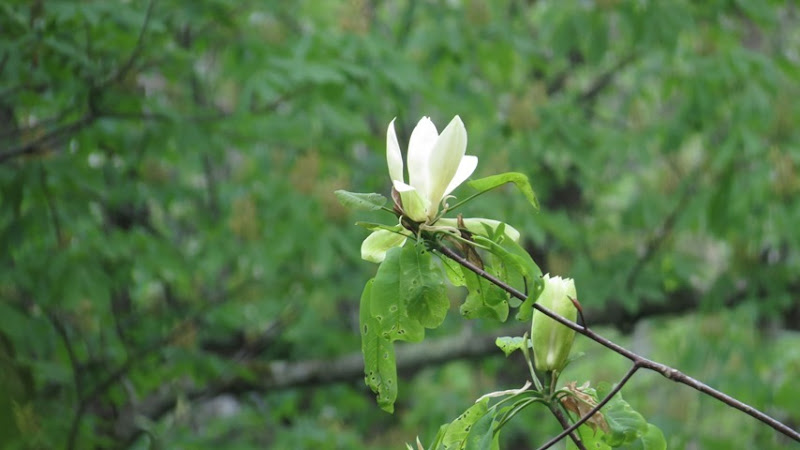 One of the many in and out creek crossing. This is from the way out so we are heading downhill. 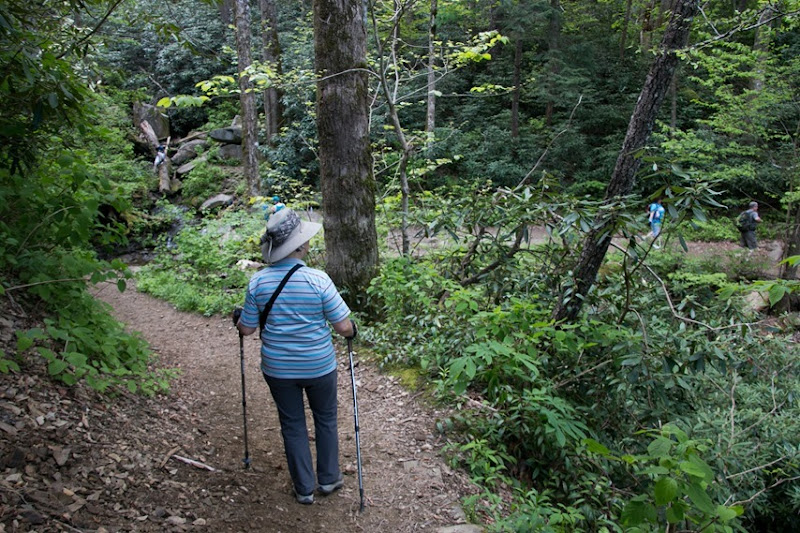 Just before the main falls was this short pretty cascade. Jennie likes looking at the water so much that it overrides her fear of heights. 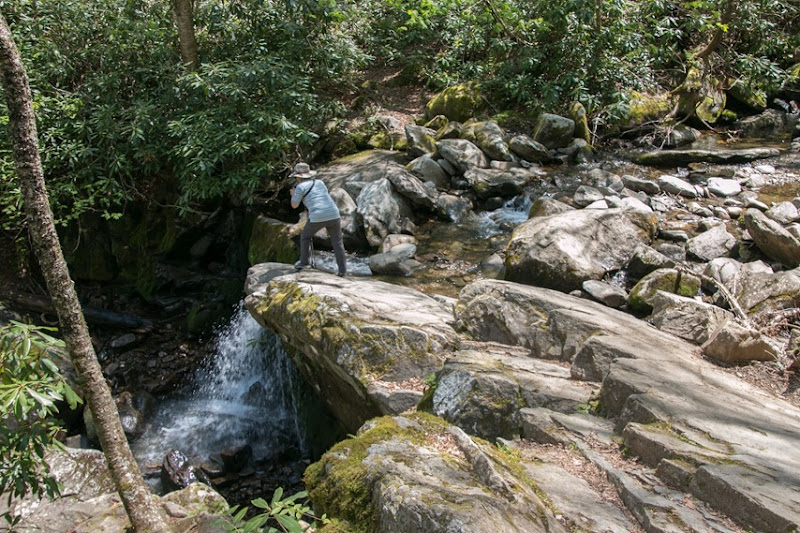 I climbed down from the trail to get a picture from the bottom. 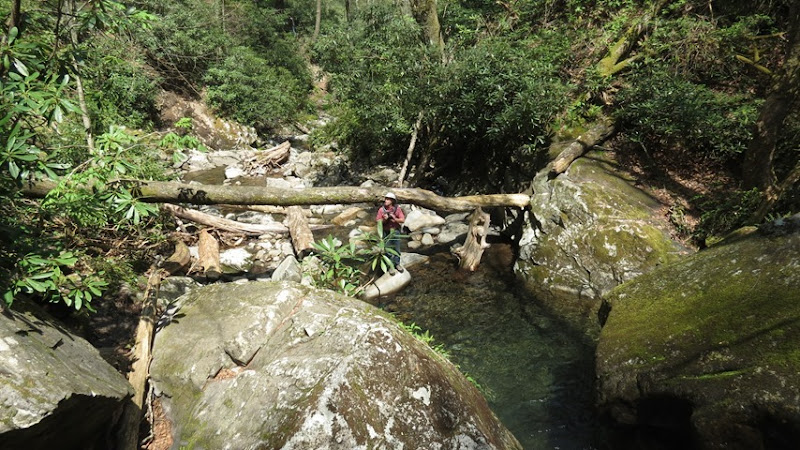 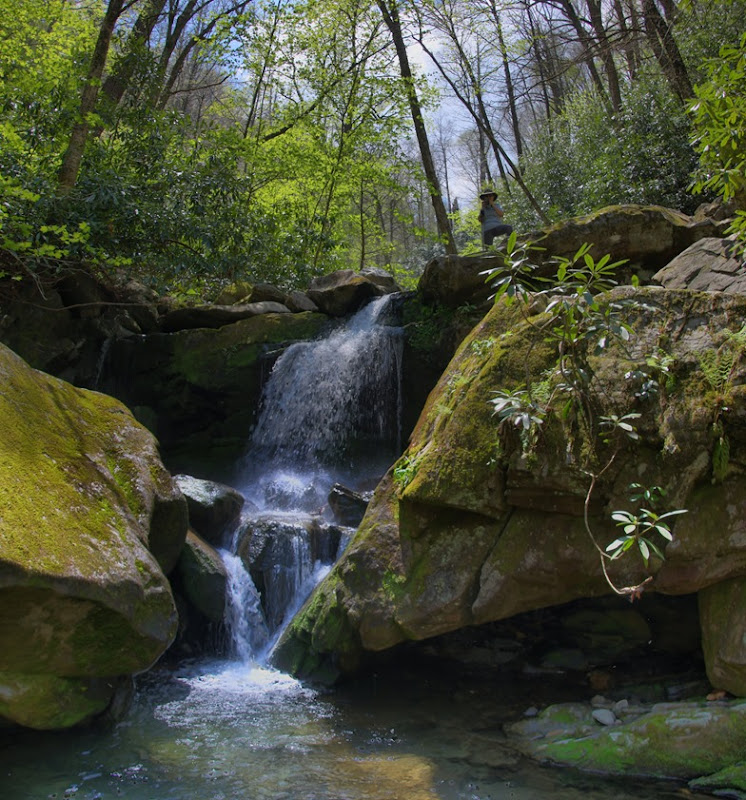 And we arrive at Grotto Falls. This is a 4 shot square panorama that worked out rather well. 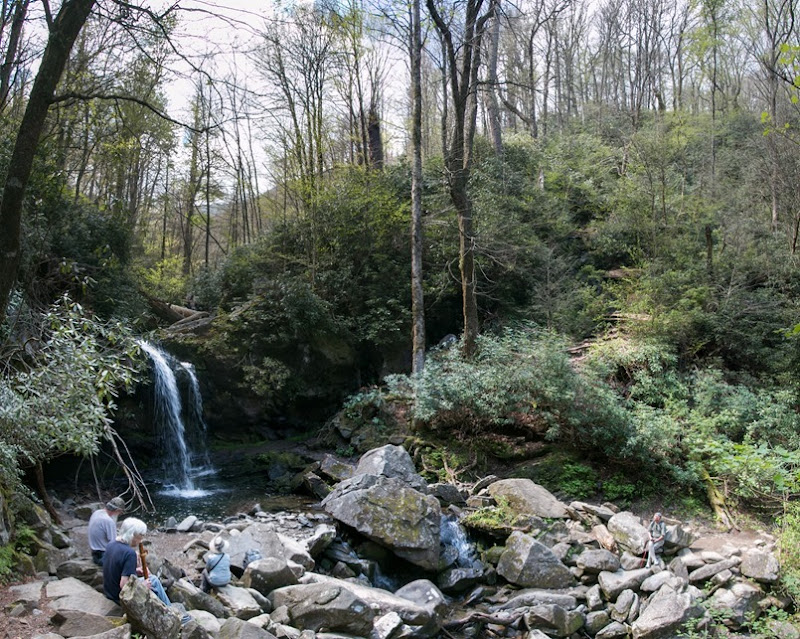 Notice the guy with the Indian flute. It was a prefect addition to this beautiful setting. 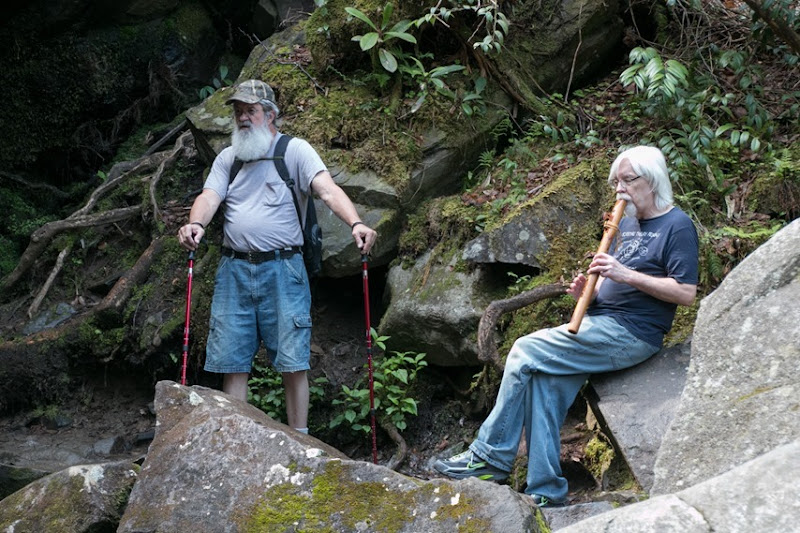 The interesting thing about the falls is that you can walk behind them. 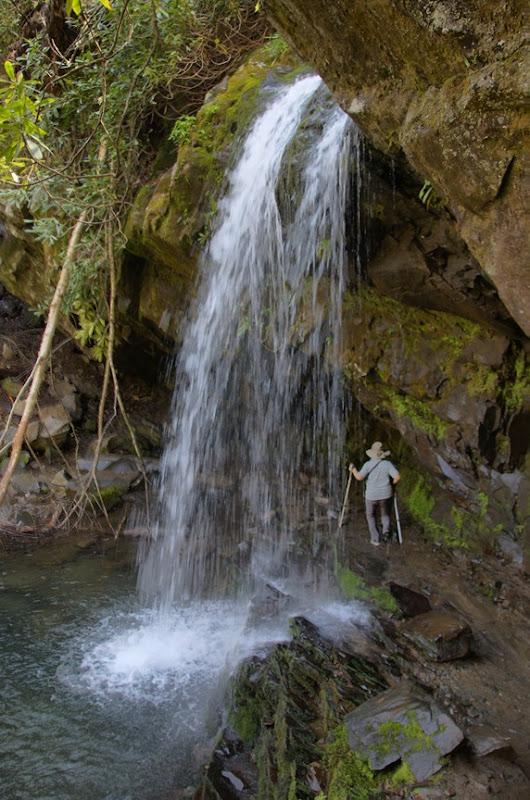 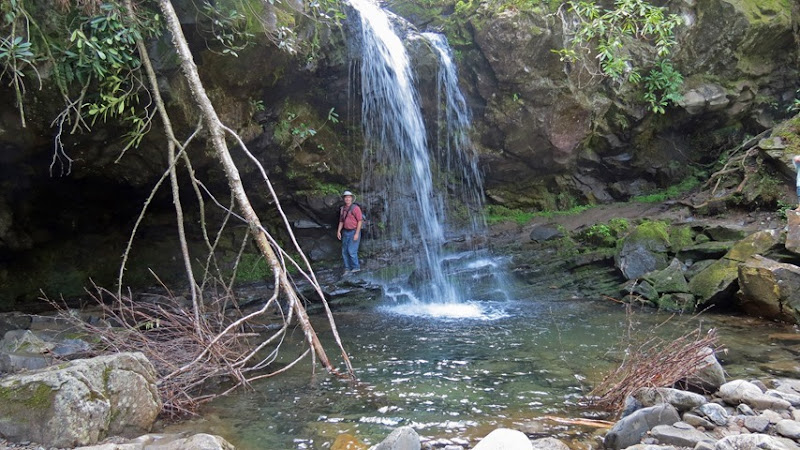 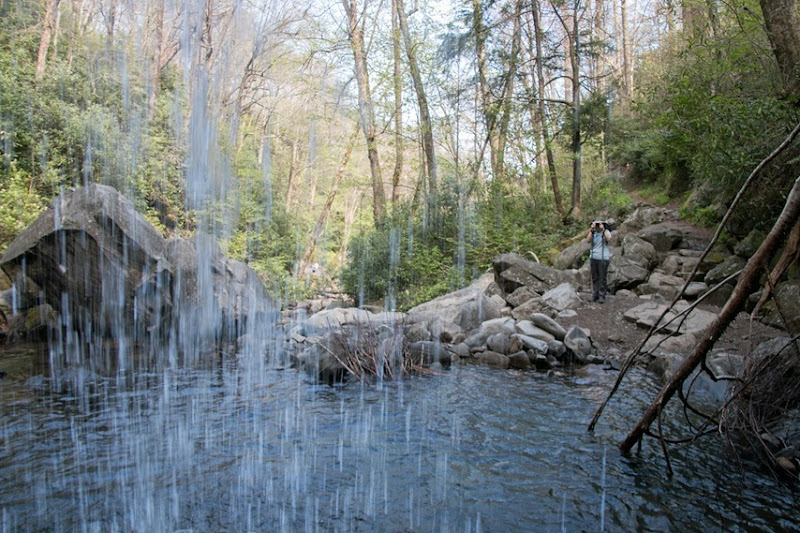 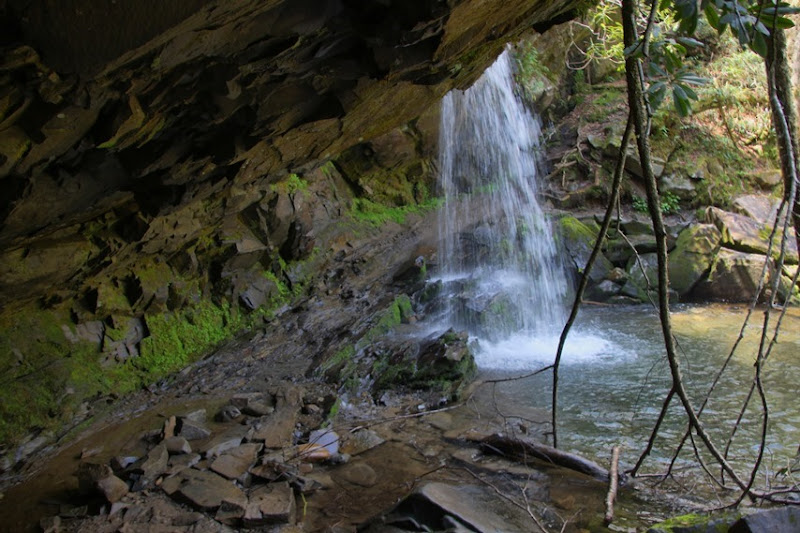 We sat and had a nice peaceful lunch. 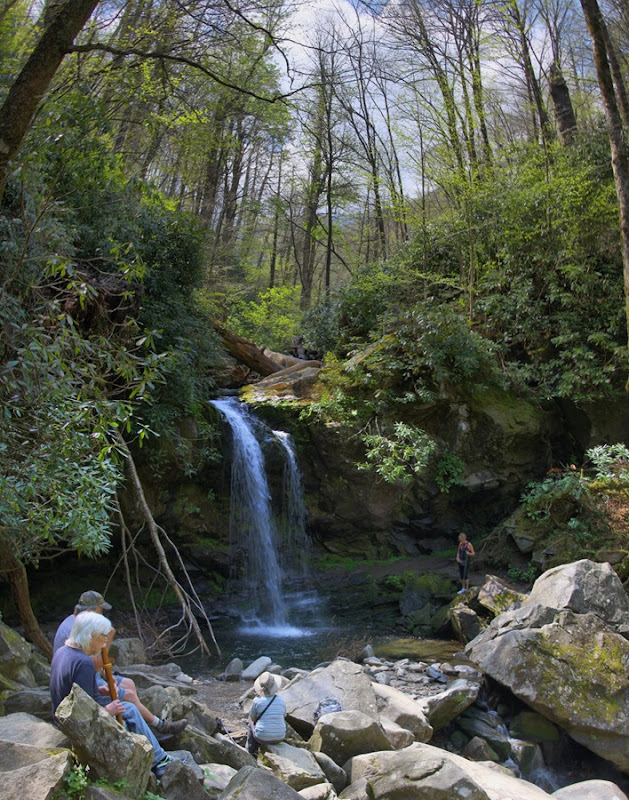 Everyone else eventually left and as I said we had the place to ourselves for about 15 minutes.

Then the hordes descended. 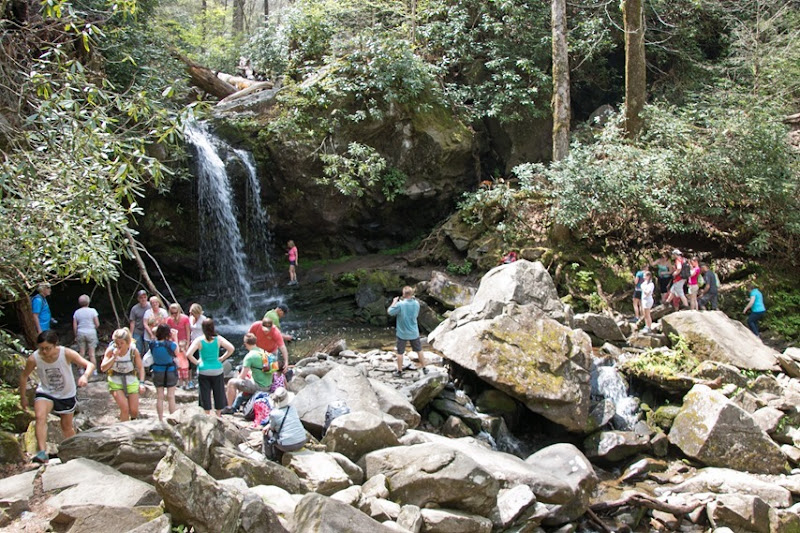 We stayed for a while but … 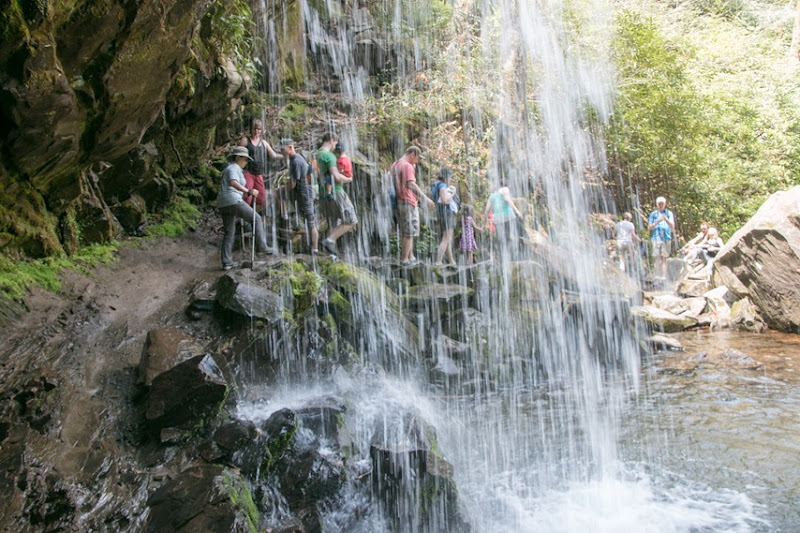 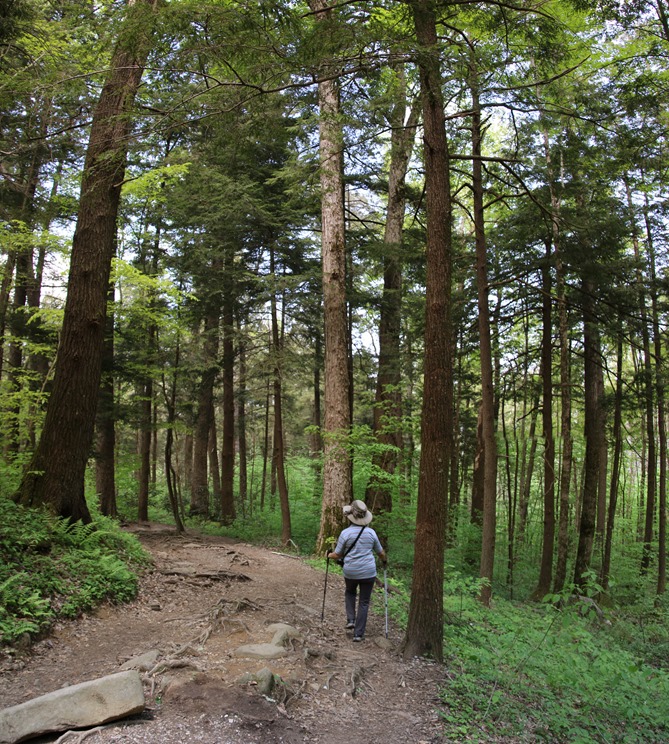 Jennie checked out a few of the shops back in Cherokee but there was nothing unique enough to buy. 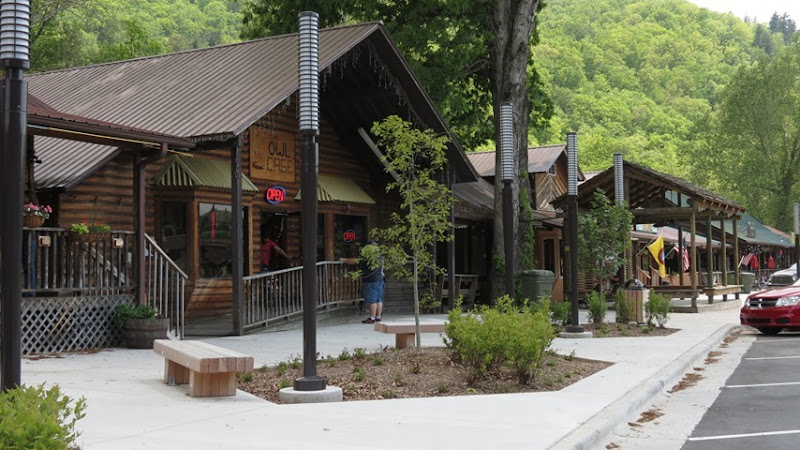 Back at the campground, the rhododendron beside the RV is blooming. 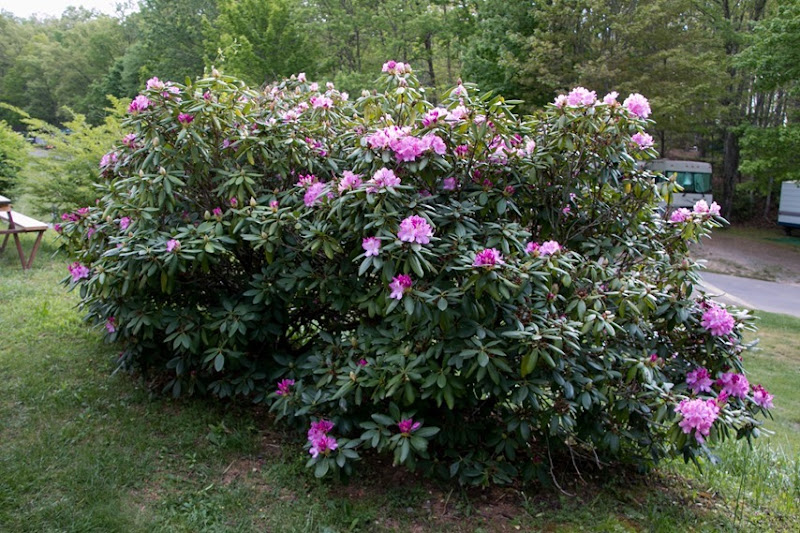 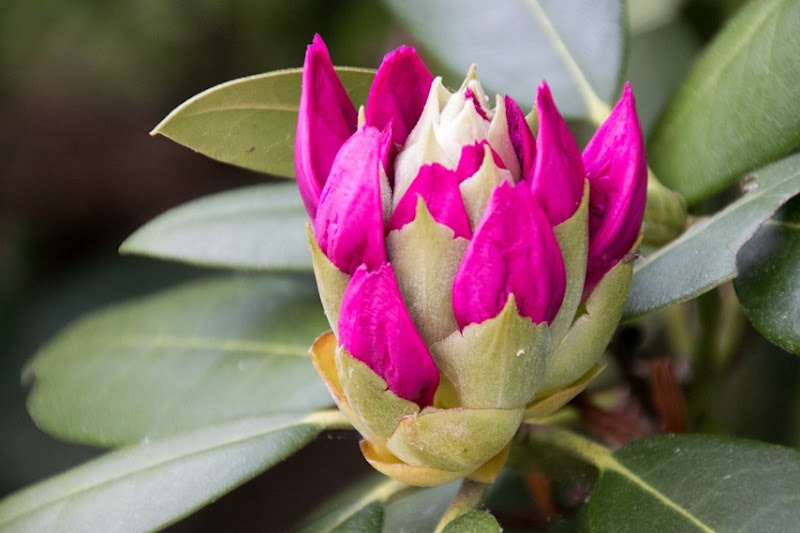 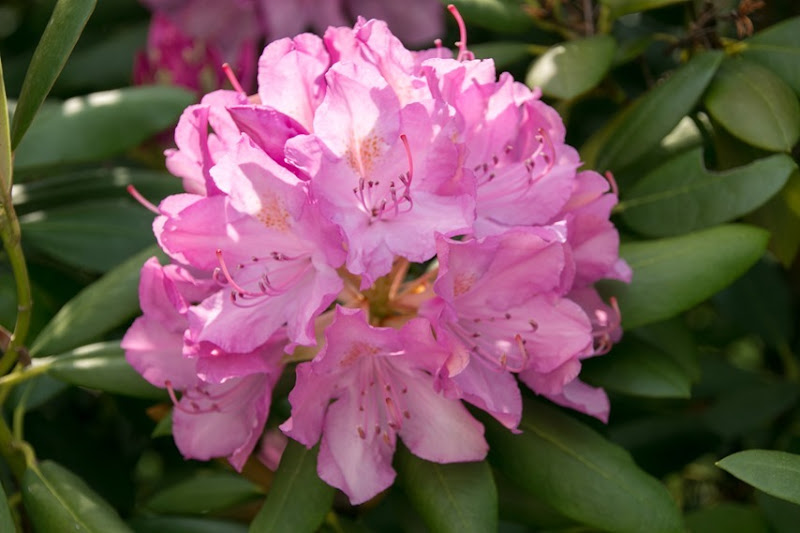 There were some azalea's on the other side. 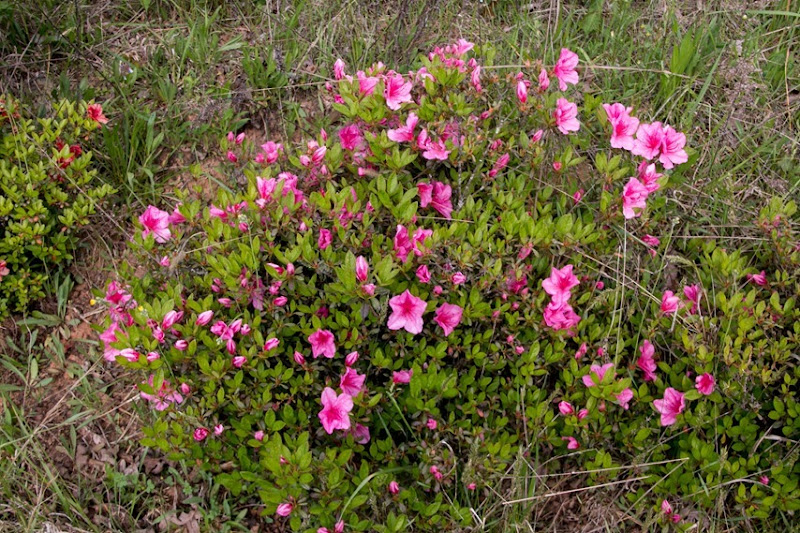 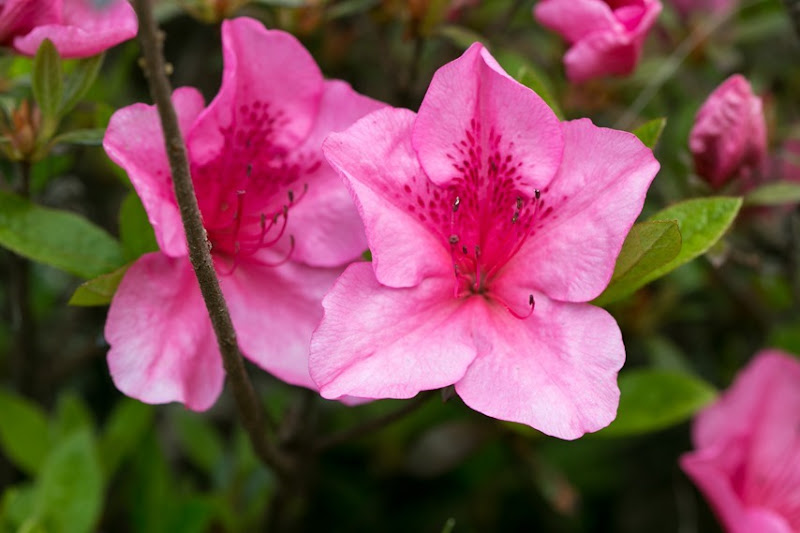 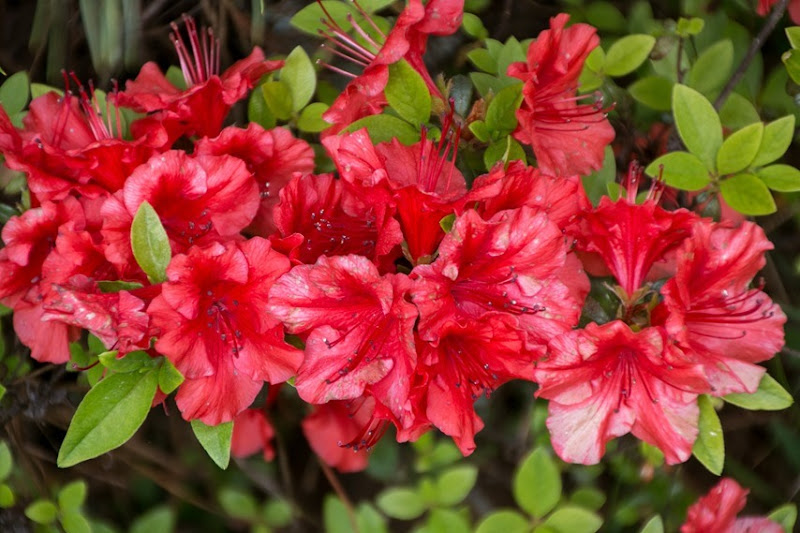 These are cultivated. There are some wild ones next to one of the campground roads. 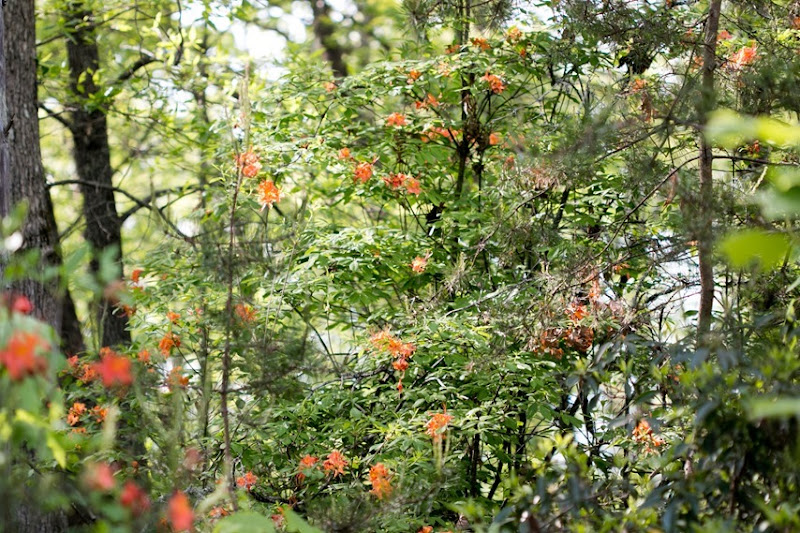 I can’t wait until we start to see them out on the trails.

We are moving on tomorrow, to a National Forest campground near the town of Brevard, North Carolina. No WIFI and I have read that the cell phone coverage is marginal. We will probably have to go into town to get internet access.