There are a lot of waterfalls around here. Just in Transylvania County they say there are more than 250. I have a guide book called “Waterfalls of North Carolina” that lists over 110 that it says are worth seeing.

We crossed two more off the list today. Both were short hikes at about 1.5 miles round trip each and very little climbing.

First up was Moore Cove Falls, which is only a few miles from the campground. The trail was very wide and smooth. 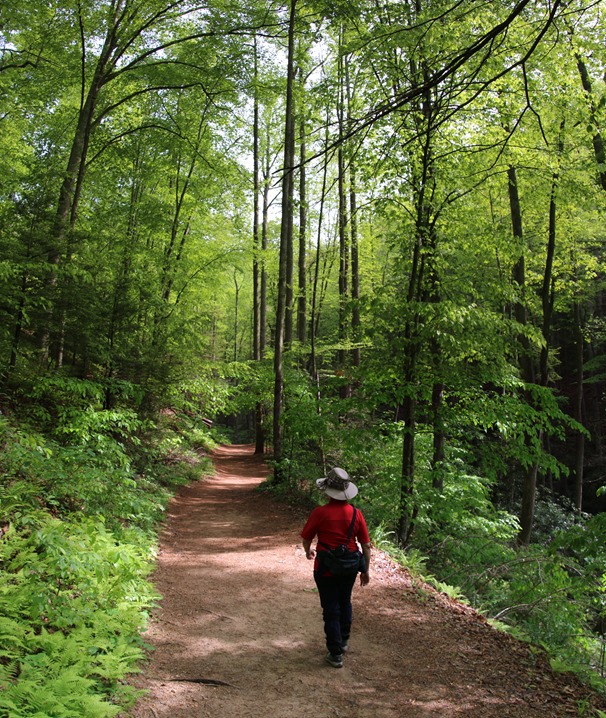 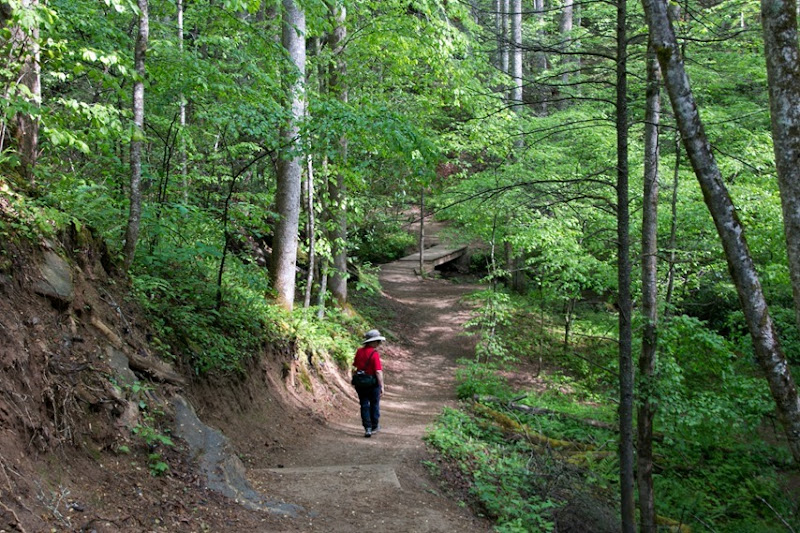 This is another walk behind falls as the water goes over a giant undercut. 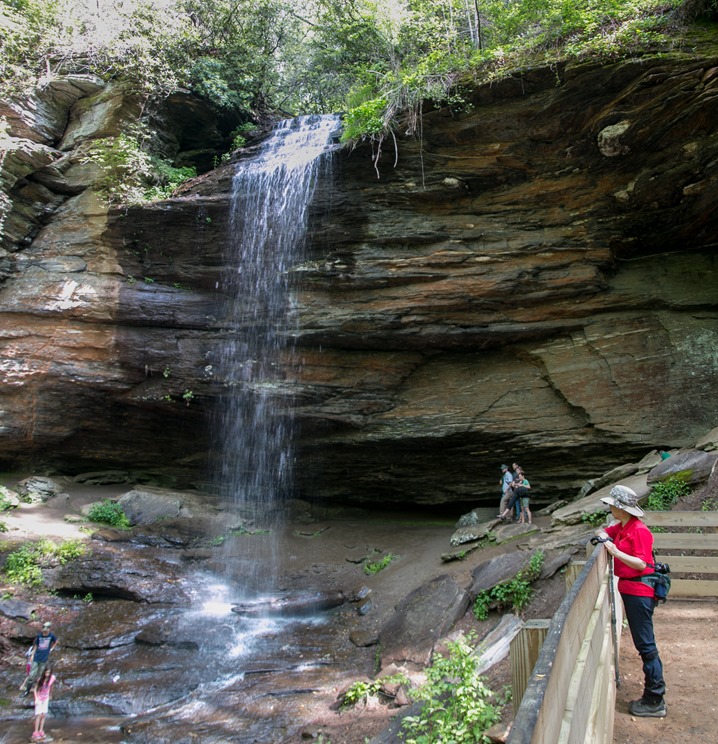 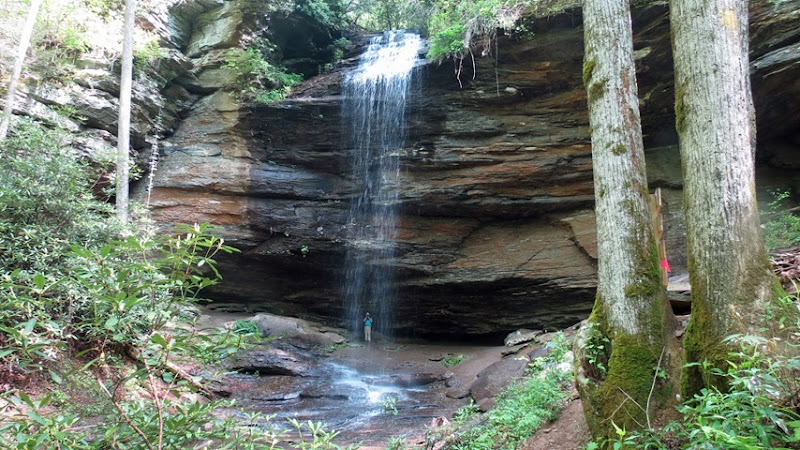 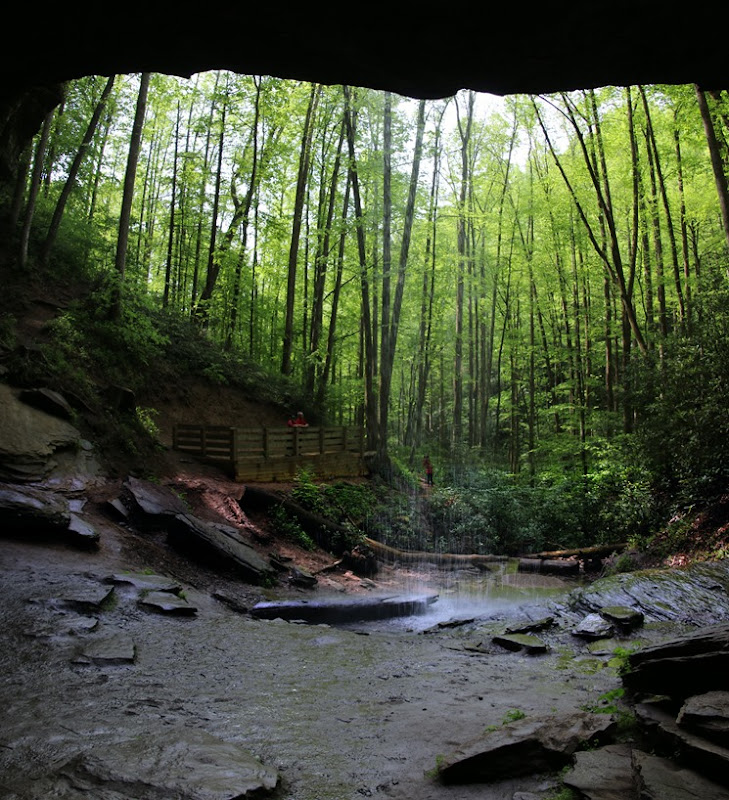 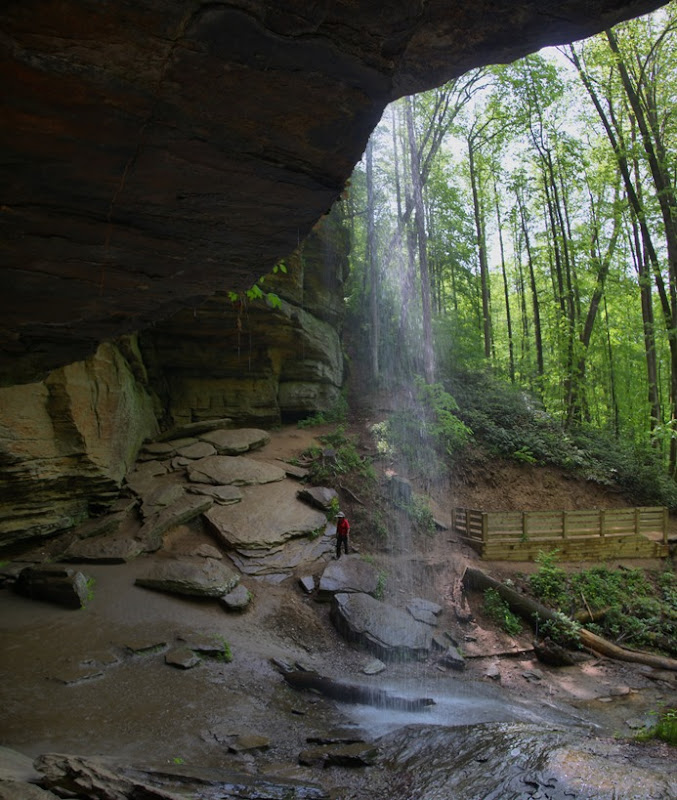 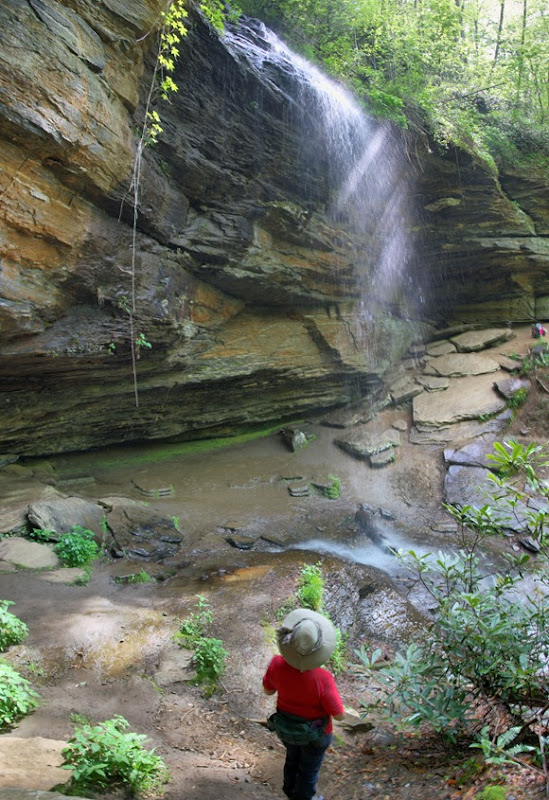 I guess a few of the drips have been hitting the same spots for a long time. 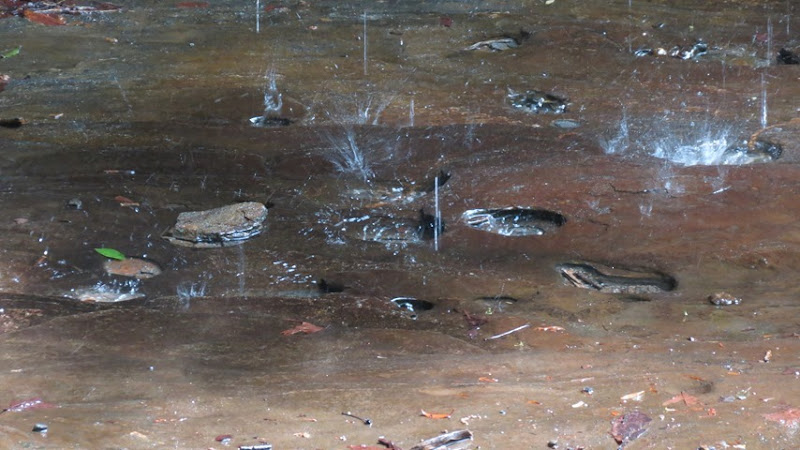 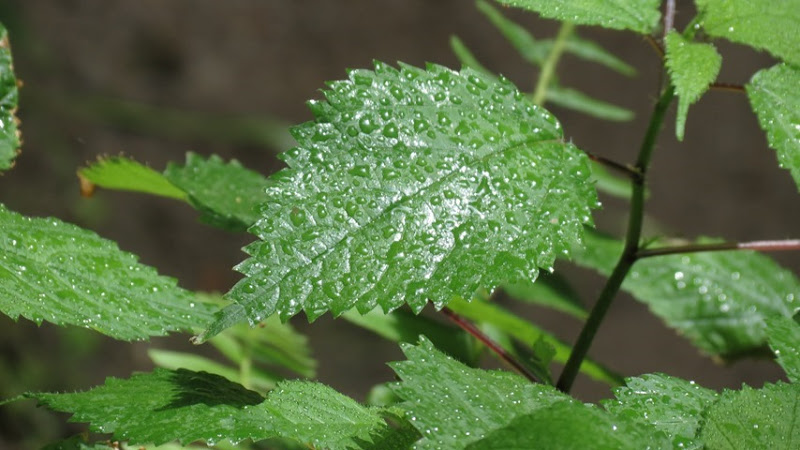 I found a very rough and steep trail that led up to the top. There was no view from the very top but there was a nice little cascade before the water goes over the main falls. 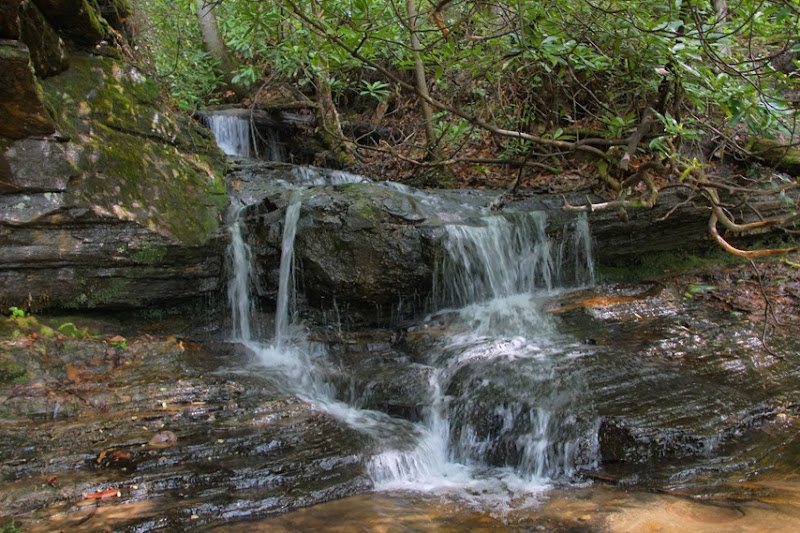 Part way down there was a trail out to a ledge. Perched there, I tried to get Jennie’s attention to get in the picture but there was just too much noise. 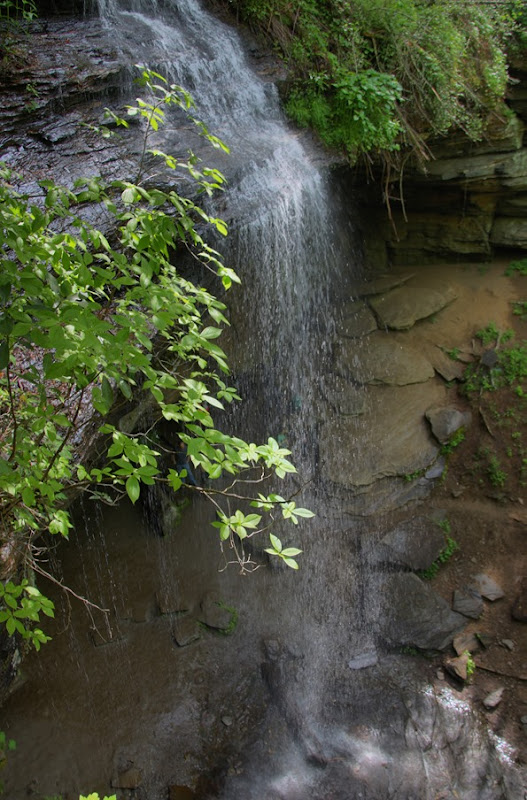 It turned out she was directly below me. 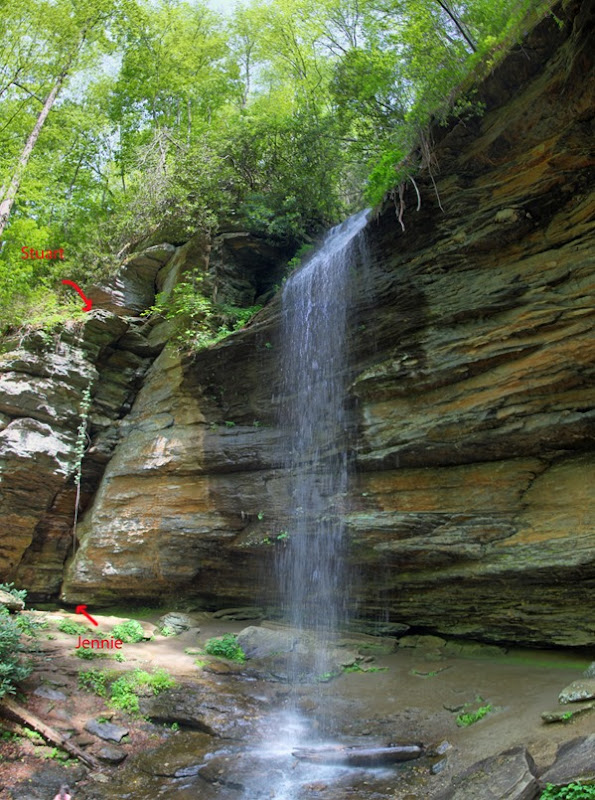 The next trail started at the Looking Glass Rock lookout back on the Blue Ridge Parkway. 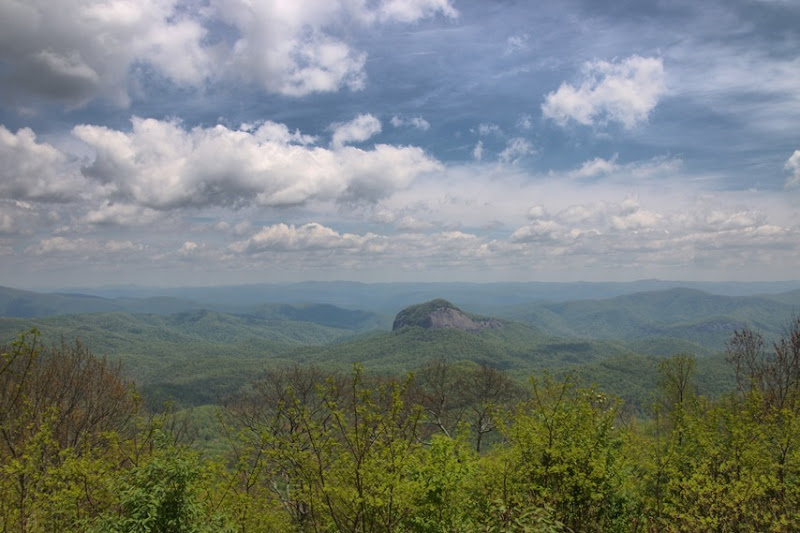 On the way back we stopped at the ranger station and  I asked why it is called Looking Glass Rock. They said that in the winter the rock face gets coated with ice and looks like a mirror. 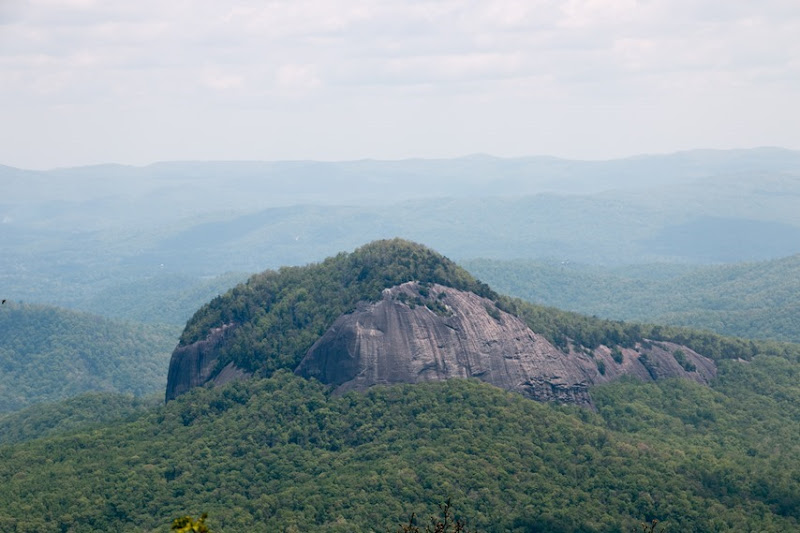 Skinny Dip falls is a small falls and a cascade with a large pool at the bottom that is a popular swimming hole. Clothing is not optional.

The trail is mostly down on the way in with quite a few rocky and rooty spots. 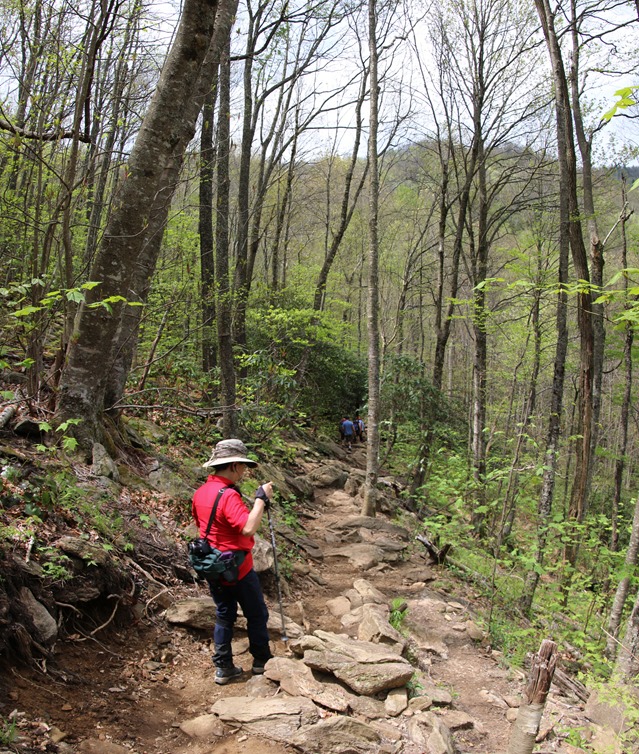 On the way out we met one poor lady from England that was trying to do the trail in very flimsy sandals. Back at the car we saw her emerge after having turned around, with a slight limp. Her husband had obviously continued on.

A few stairs after crossing a creek. 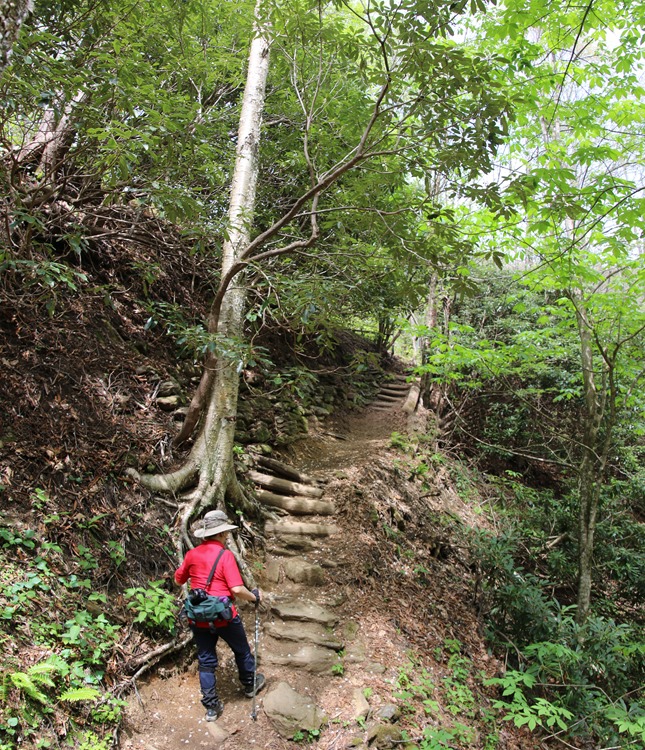 We love to see the colour on the trail. Some was subtle. 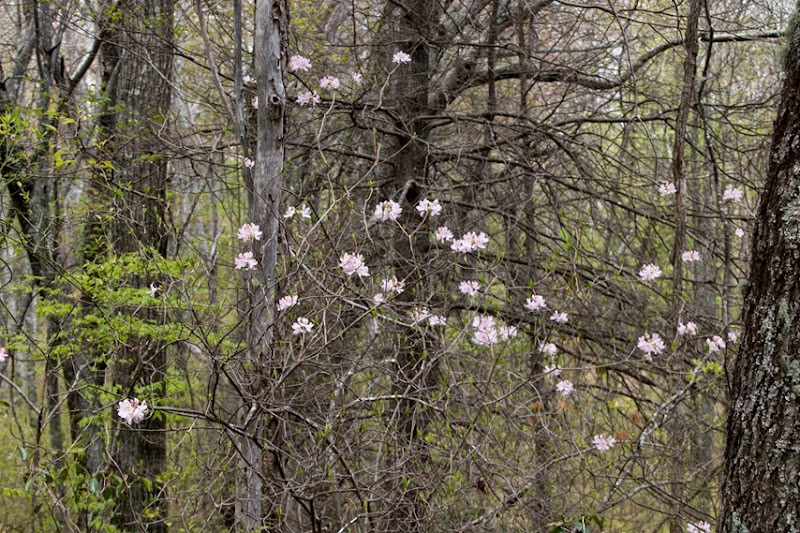 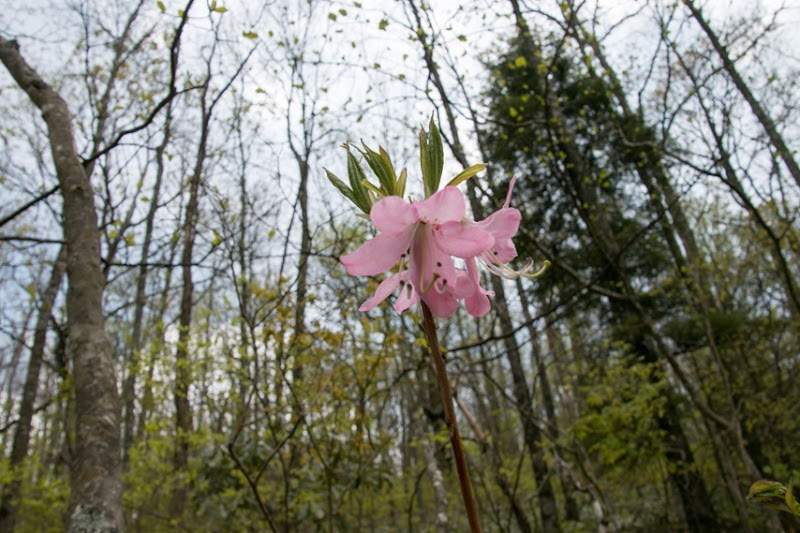 Some quite bright. I saw this lone bush from a long way off and had to get a close-up. 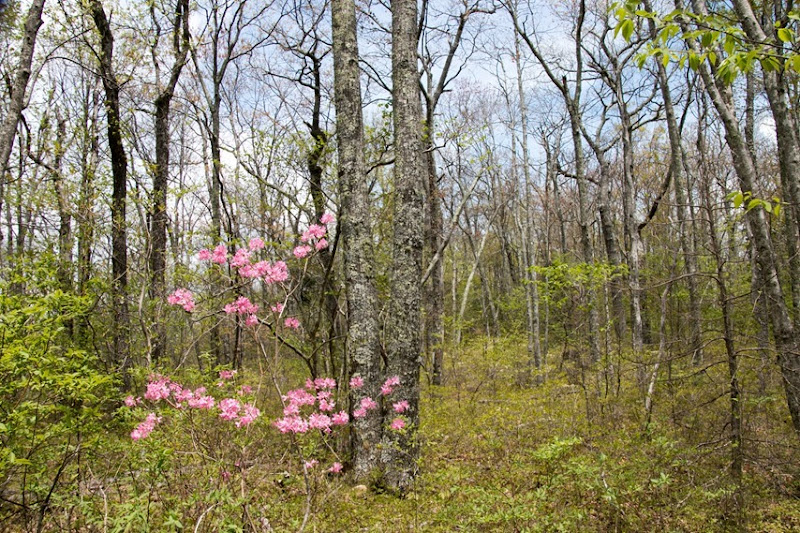 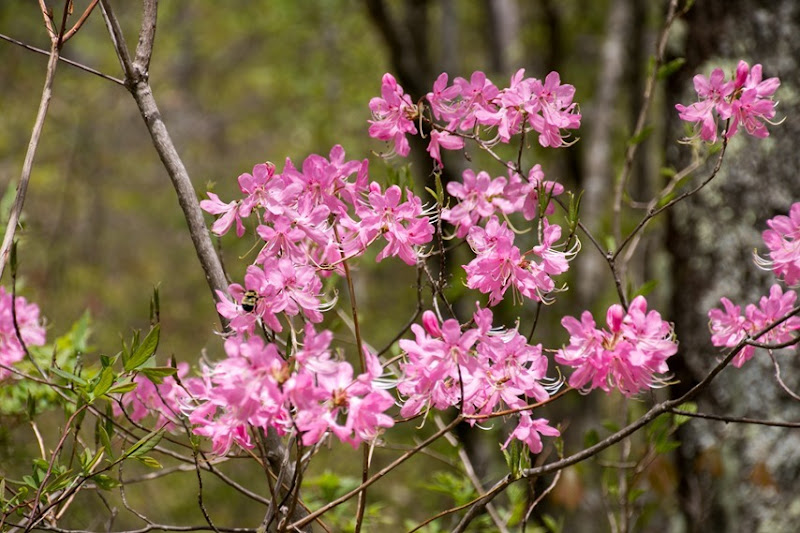 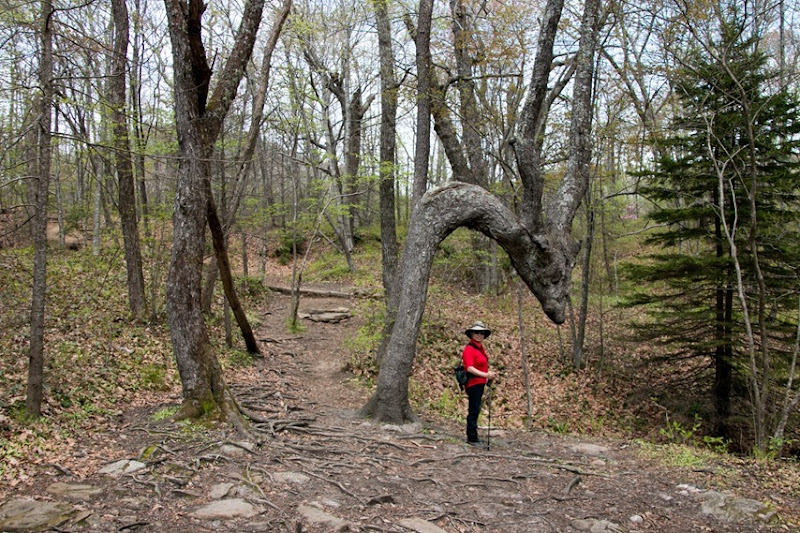 Our first look at the falls before going down some final stairs and across a bridge. 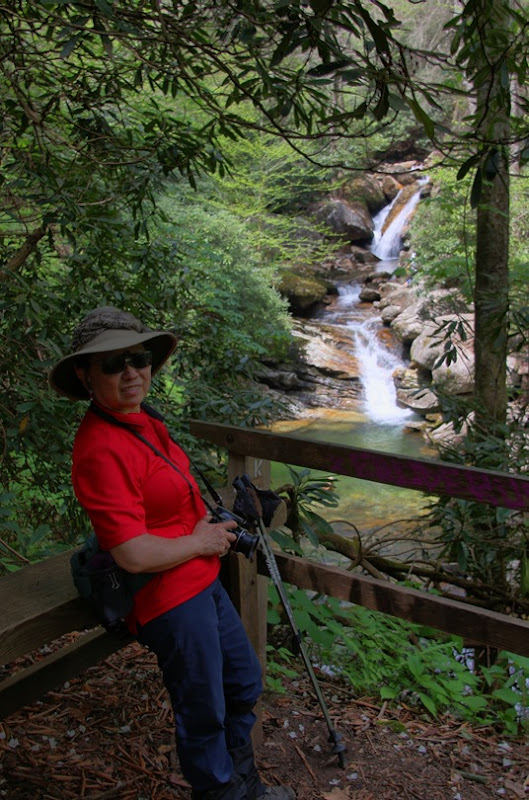 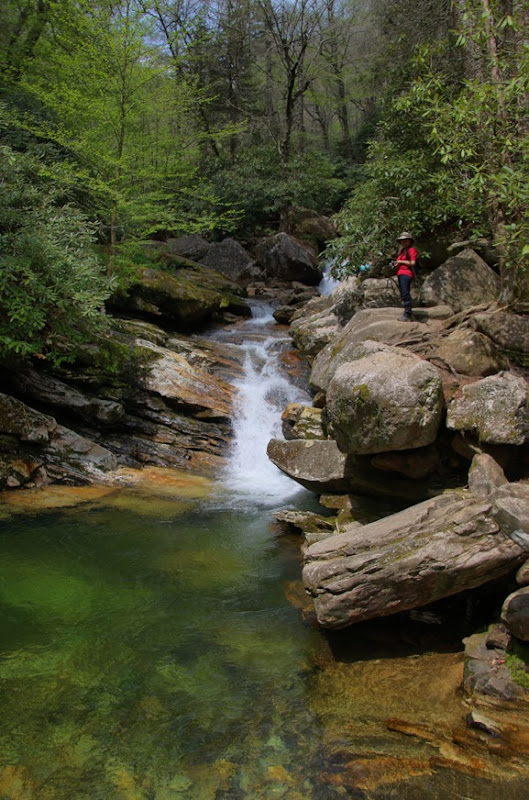 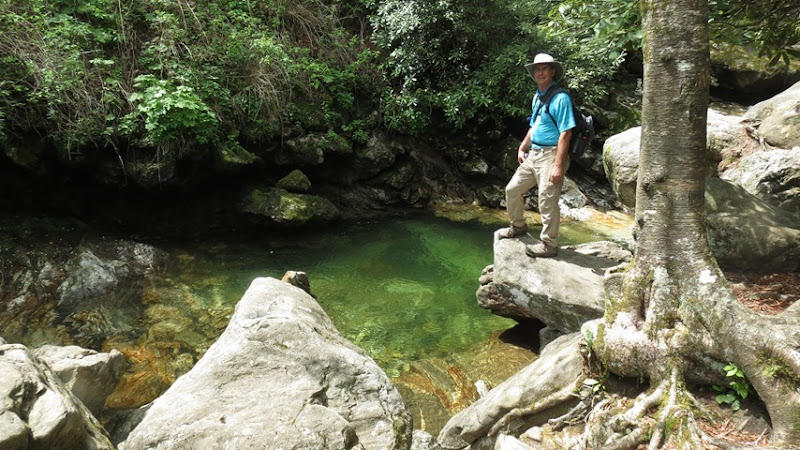 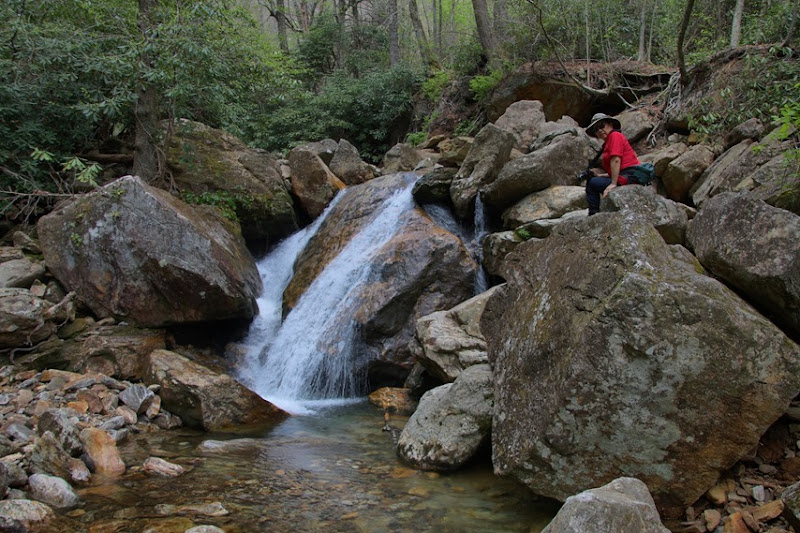 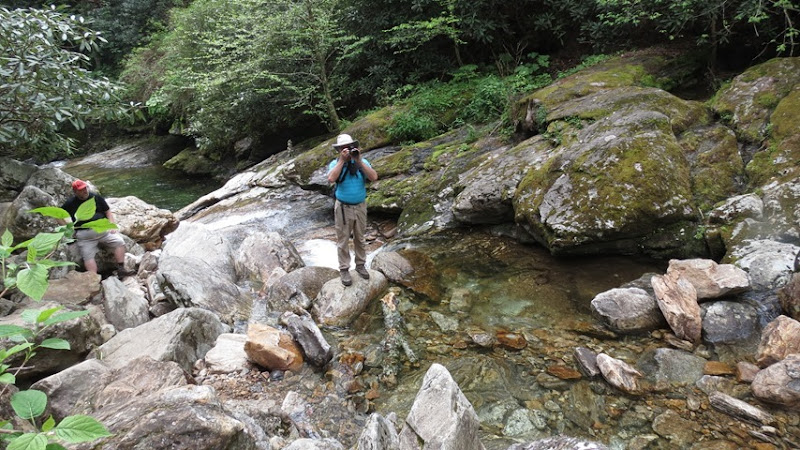 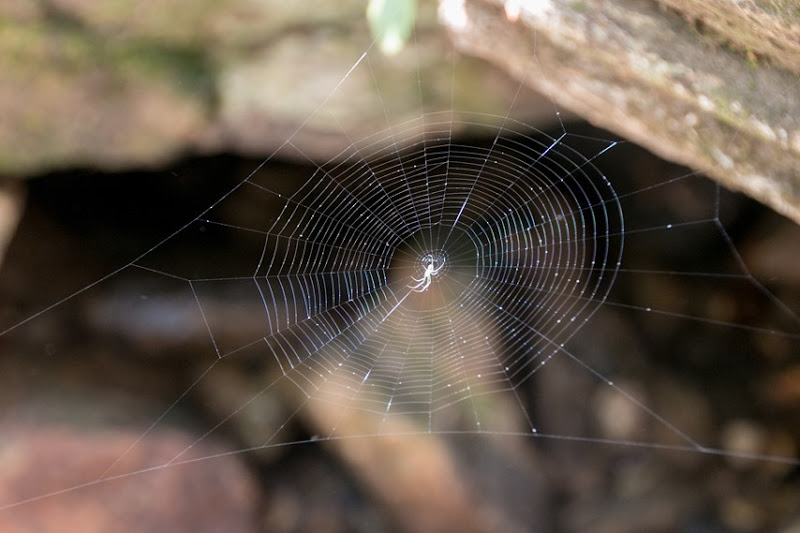 As we sat there it got busier and busier. 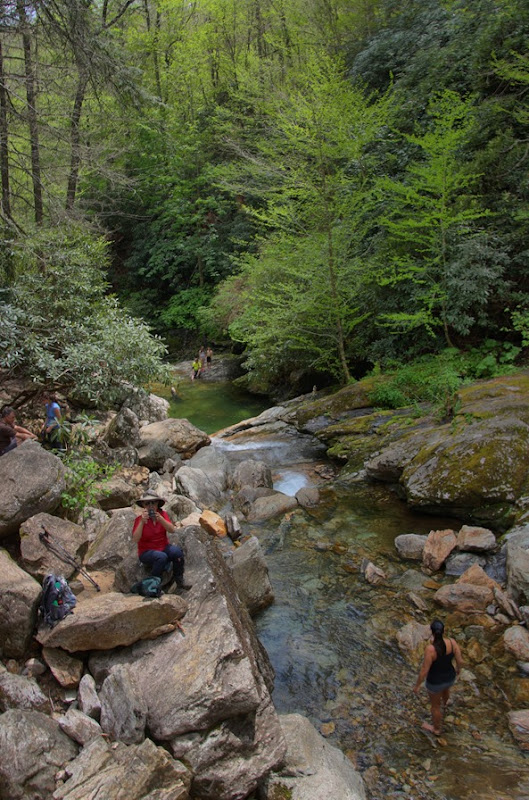 Only the kids would go in the water. 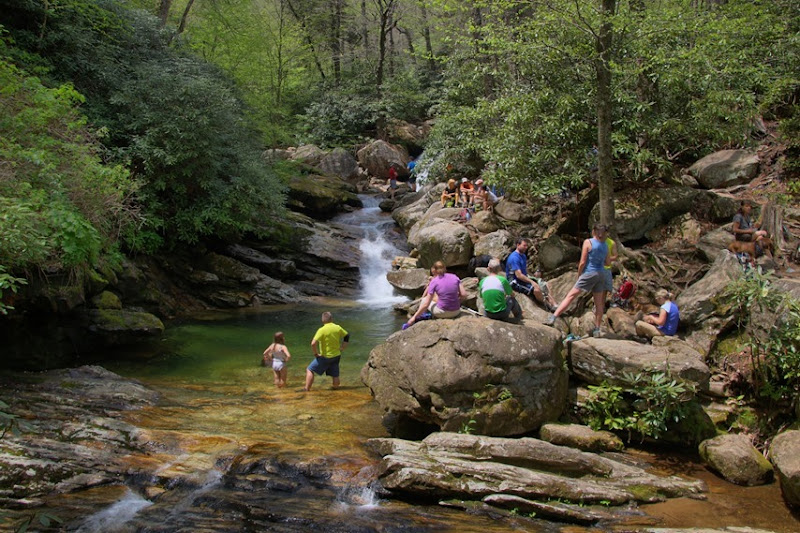 Heading out, up  and back home. 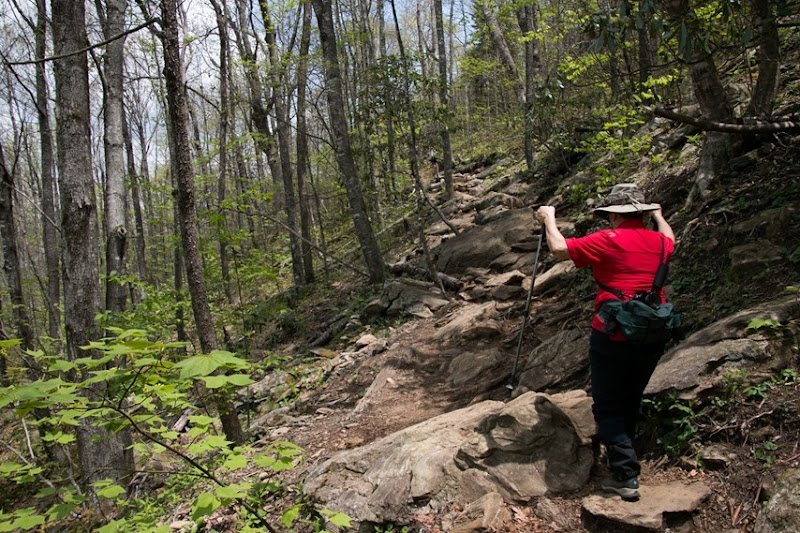 No rain today even though the forecast had predicted a good chance of afternoon showers.