May 15 – Raven Rock and Schoolhouse Falls

One thing I forgot to mention yesterday is that this place is a pretty good deal. We are only paying $225 for the week compared to $196 for the national forest campground last week

We set the alarm for 8:30 am to get up for our 9 o’clock breakfast with the RV rally people. We were almost ready when there was a knock on the door at about 8:55. Everybody was already up at the pavilion and was wondering where “The Canadians” were. The campground host was sent to get us. He waited until we were done and then gave us a ride up in the campground ATV. 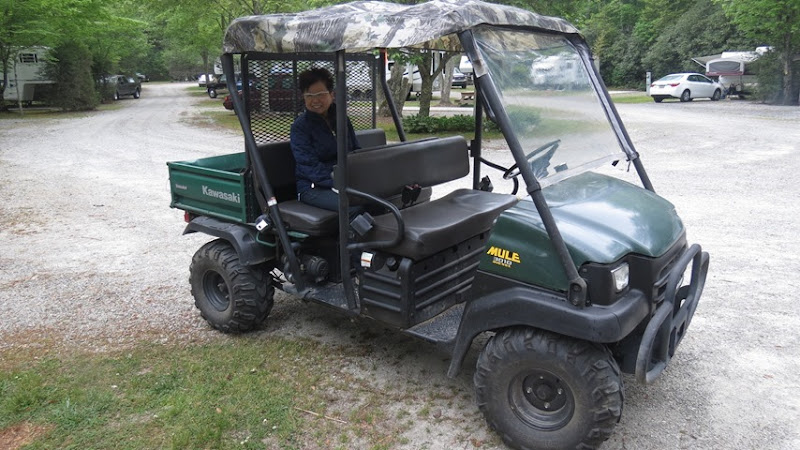 Thankfully we were not the last ones to get there. After a morning prayer, we all got in line for our Eggs Benny and hash browns. We got two eggs each and were quite full afterwards. 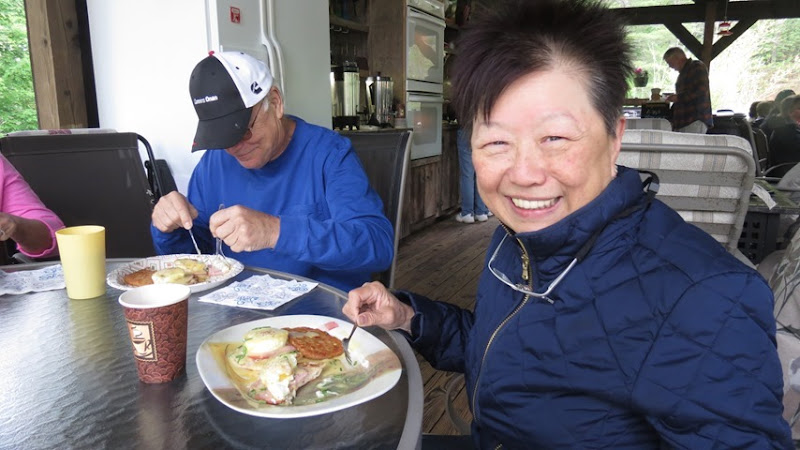 We waited while the club members had a short meeting about future get togethers and then we headed off to do some hiking.

Walking back to the RV we noticed that a couple were waiting with their rig by the office and wanting to checkin. They looked a bit lost, just wandering around because everybody including the campground staff was up at the breakfast.

It was quite cloudy in the morning and the forecast called for a chance of afternoon showers so we decided to do a couple of short hikes in case we had to dash back to the car. It turned out that the day got better and better and it has been sunny all afternoon.

The waterfalls are along a road that runs along the north shore of Lake Toxaway. For the Ontario people, it looks like this is the Lake Rosseau of the area. All monster homes perched on the cliffs overlooking the lake, with massive gated driveways and PRIVATE signs.

This place really needed the addition.. 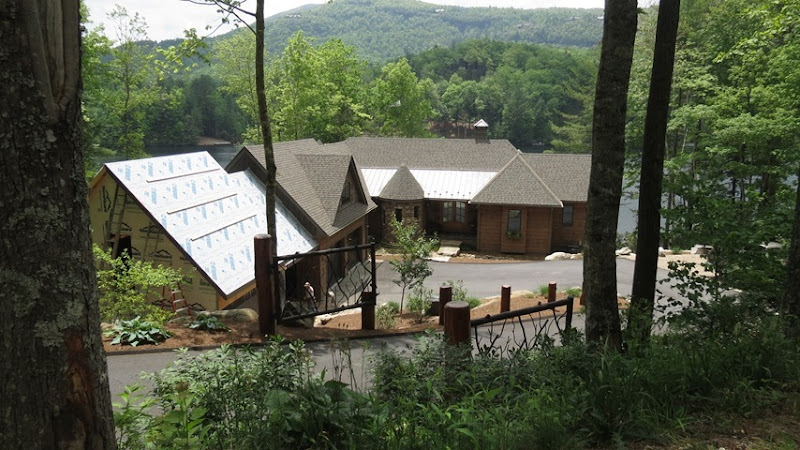 The first hike was a very short one, at 1/2 mile total, to Raven Rock Falls. The guide book said we should have it to ourselves but when we got there another car was in the pulloff. We met two ladies down at the falls and then a few minutes later another couple and a paid guide came along. The guide seemed annoyed that anyone was here and asked how we had found out about it. He seemed to think it was “locals only” knowledge.

This is the trailhead. 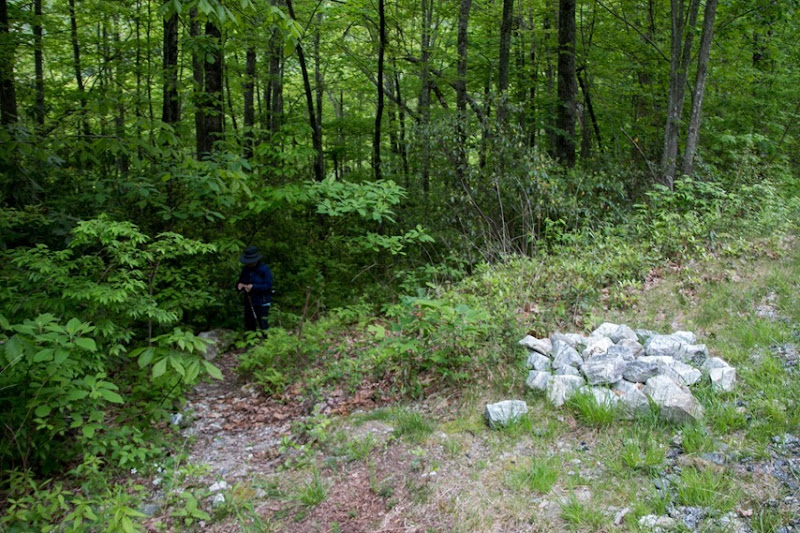 The guide book said to drive up the road to the telephone post #62 and then 50 feet up the road you should see the trail. No signs at all.

It was a pretty steep and rough trail. I have no idea who maintains it. We first crossed a creek with a small cascade above us. 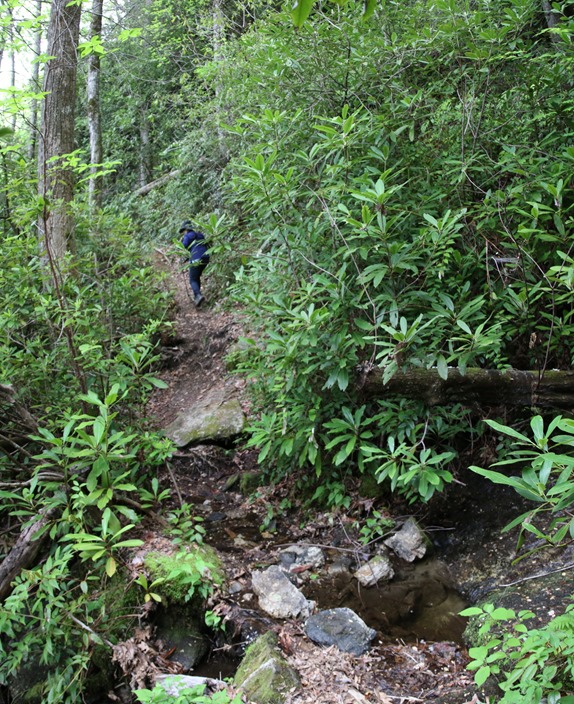 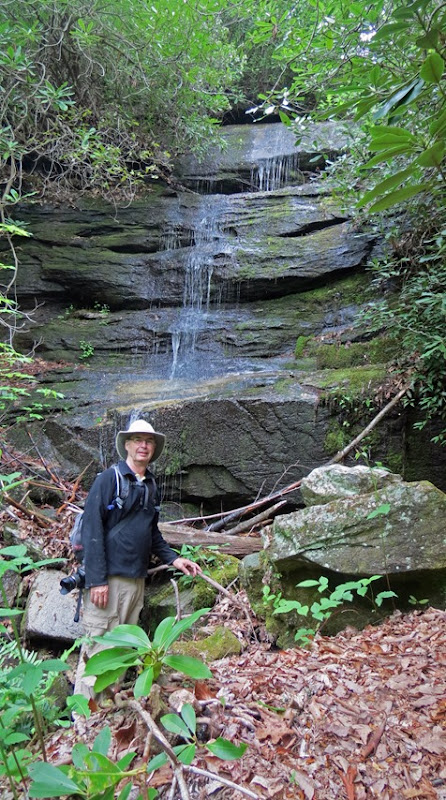 Next was a walk over a bridge behind a very small waterfall. 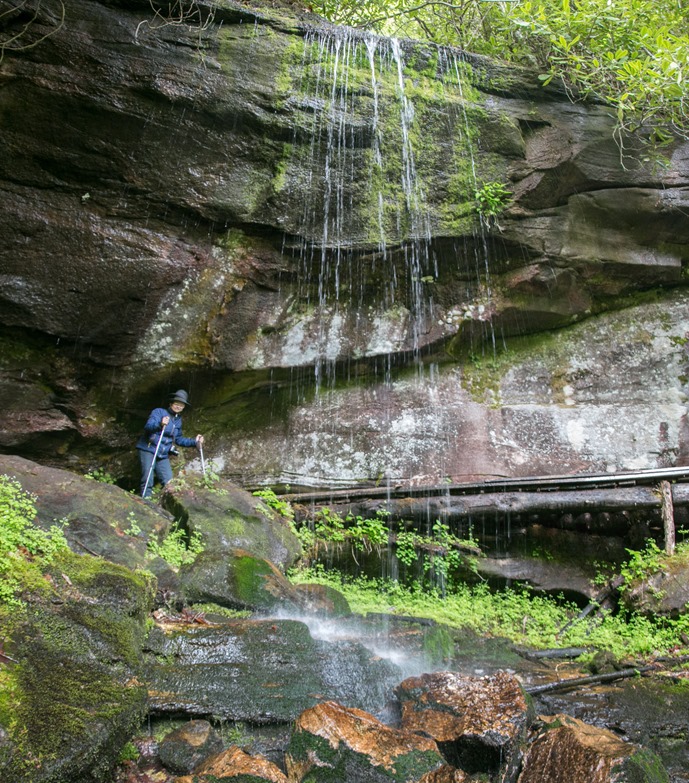 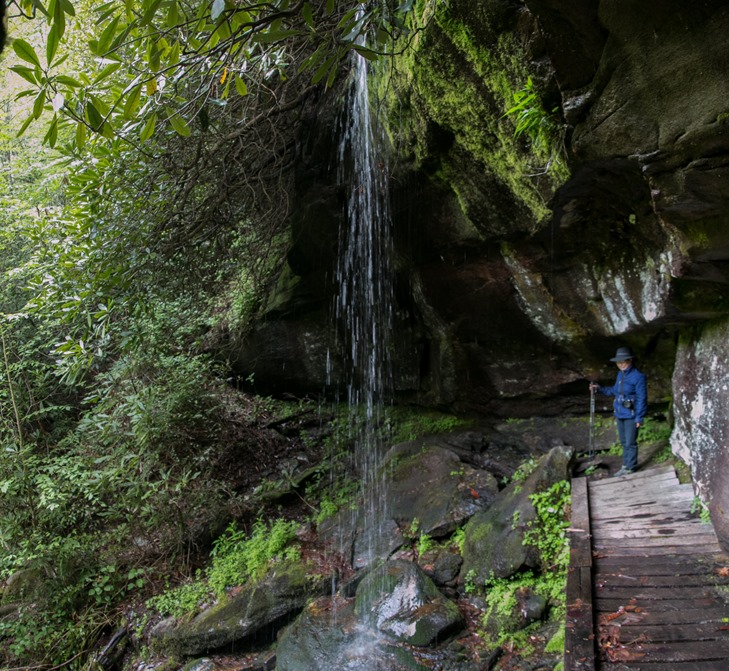 Then we arrived at the 100 foot tall Raven Rock Falls and cascade. 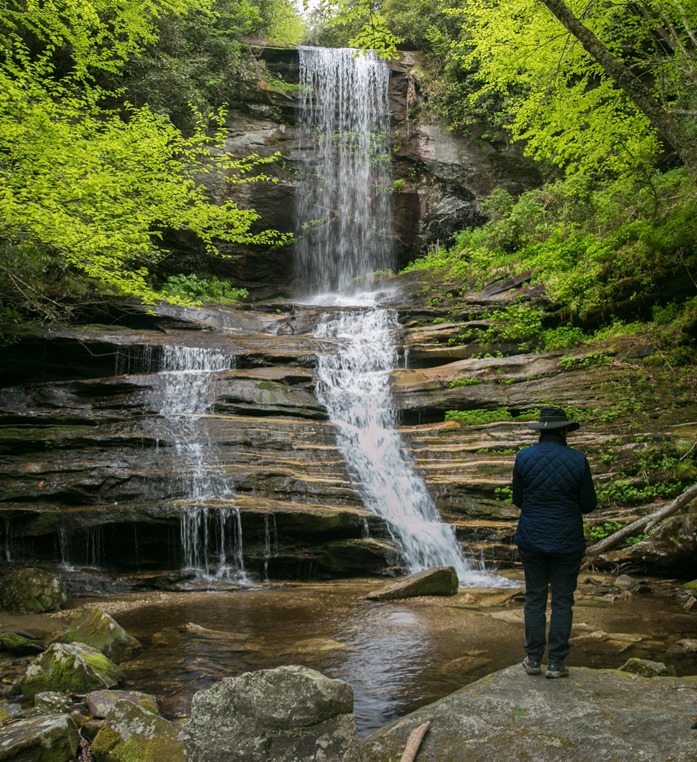 I, of course, had to get closer. 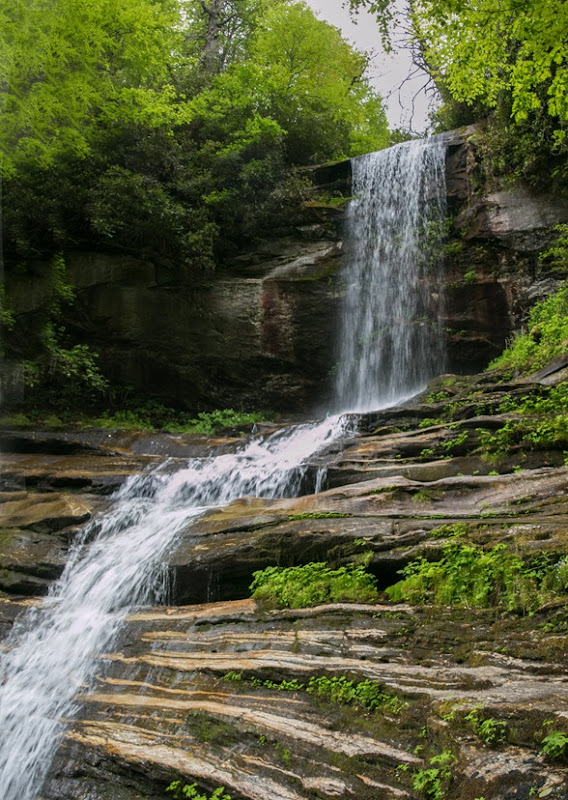 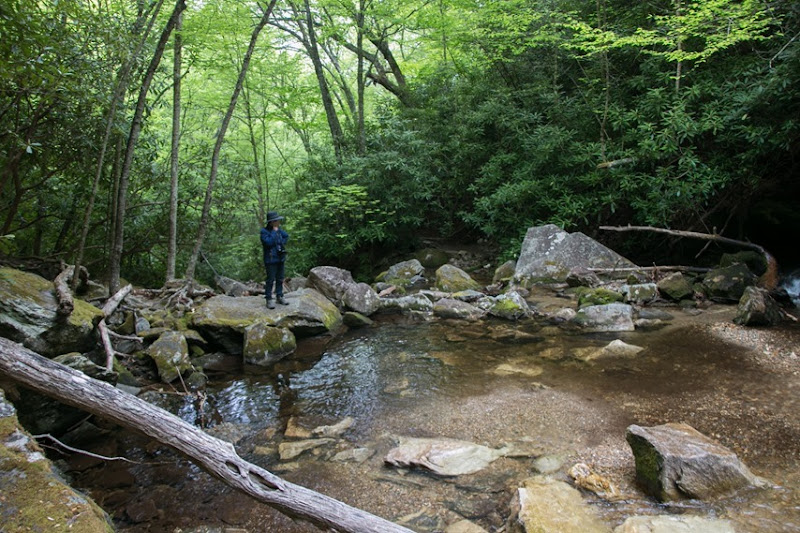 Notice how much bigger the falls look with me standing next to them. 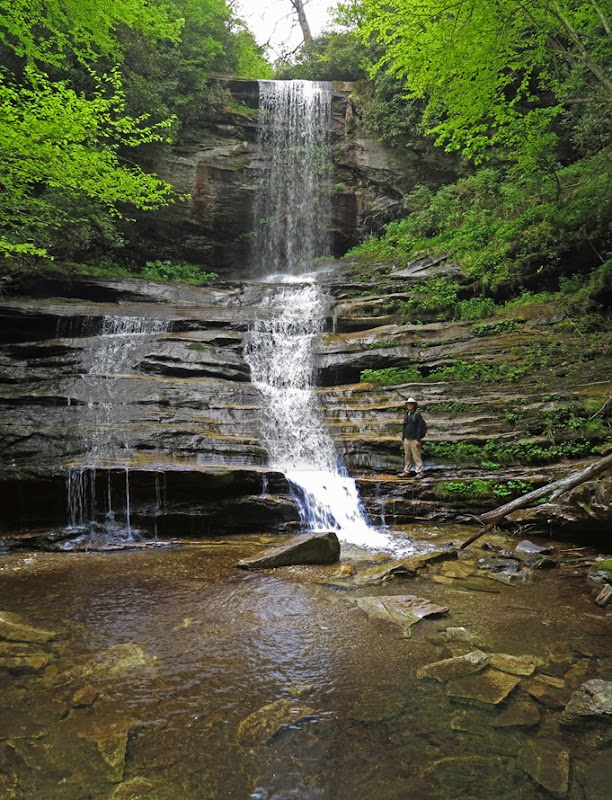 The other people didn’t stay long. We stared for a while and then moved on.

A few miles farther down the Cold Mountain Road we arrived at the trailhead to get to Schoolhouse Falls. The first part of the 2 mile return trip was through the open woods. 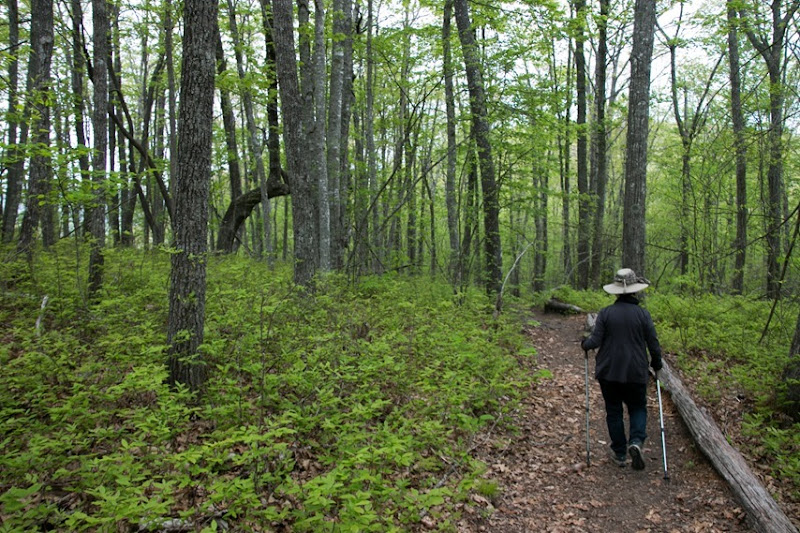 Most of it was a narrow gravel road and not very strenuous. We only dropped about 300 feet getting to the falls. 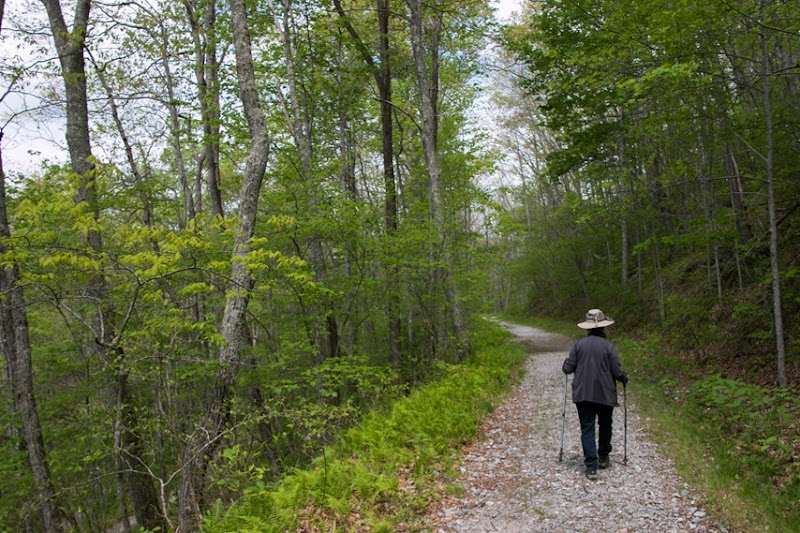 We had no idea why this wrought iron bench appeared part way in beside the trail. 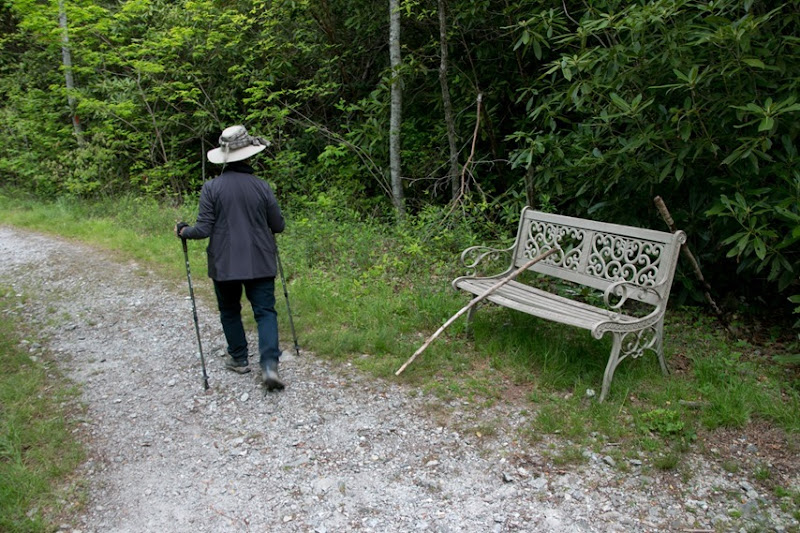 Almost there. The jacket came off because it was a lot warmer. 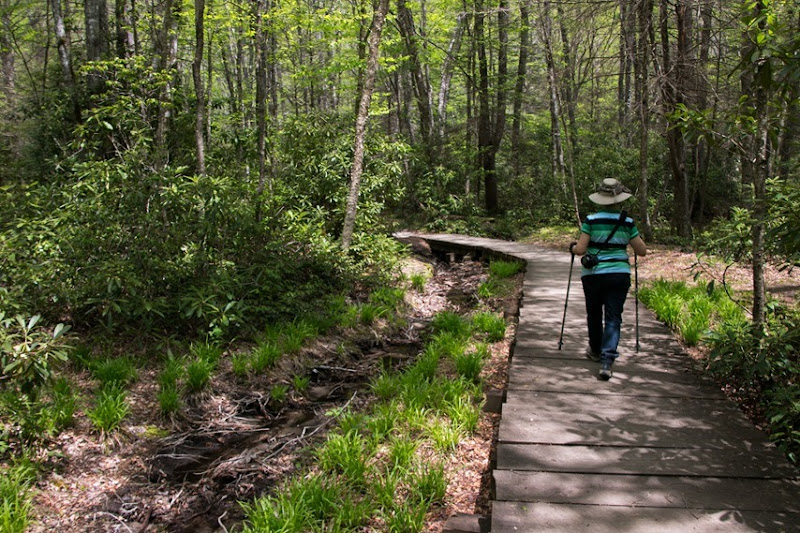 Schoolhouse Falls are only 20 feet tall but they are in a very pretty setting. We arrived to a small sandy / rocky beach with a large swimming hole and the falls in the background. The skies were still a bit grey when we got there but we had some patches of sun by the time we left.

I saw that there was a trail around the pool to get right up to the falls. There were nice stepping stones across the creek. 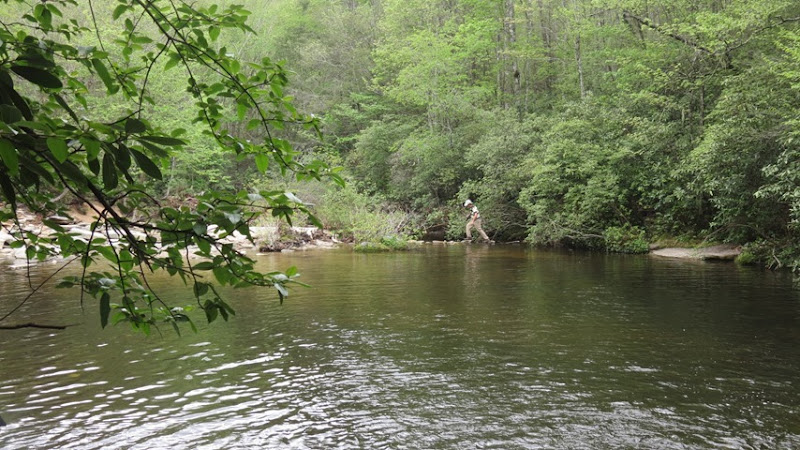 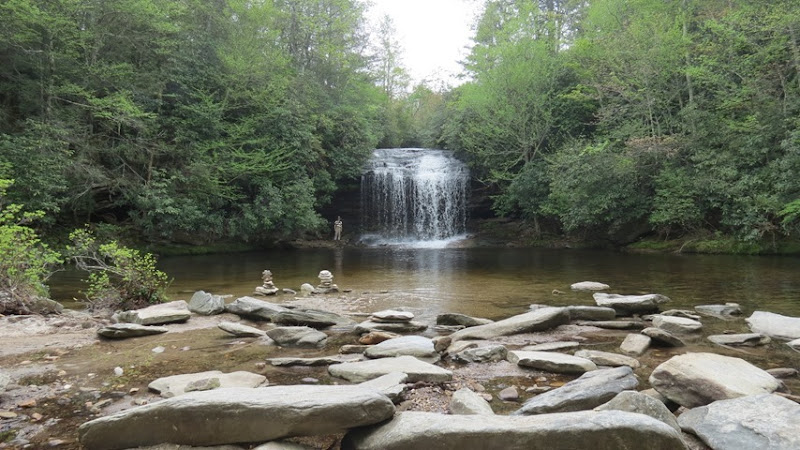 And then behind to the other side, without getting too wet. 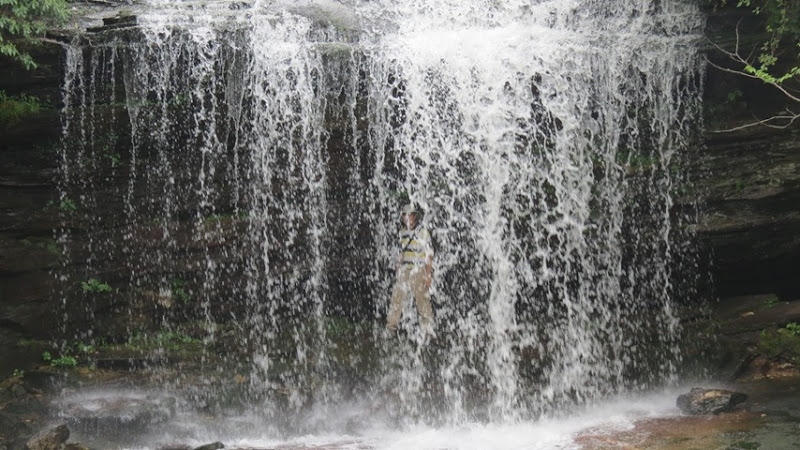 The little patch of blue in the middle is Jennie. 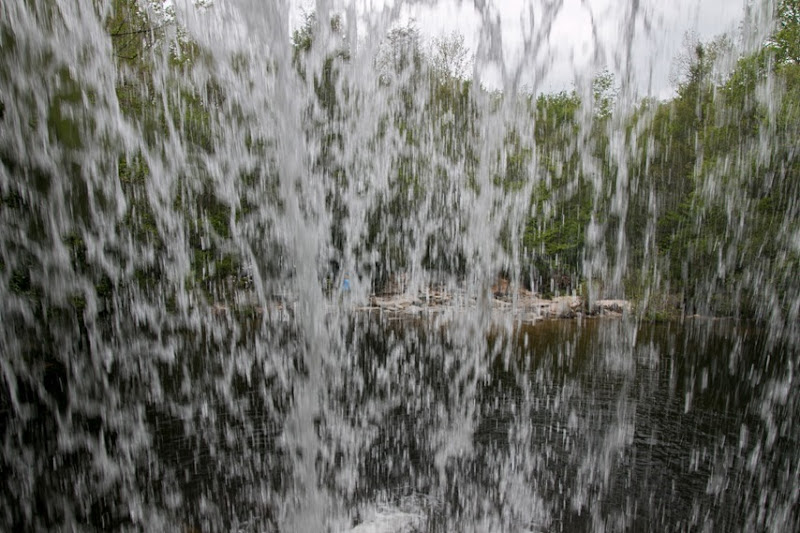 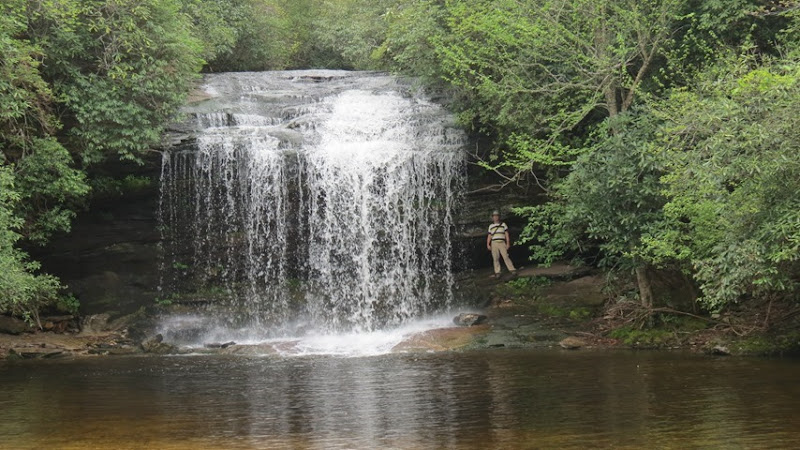 I went back and got Jennie. There was a large overhang just to the right of the falls. 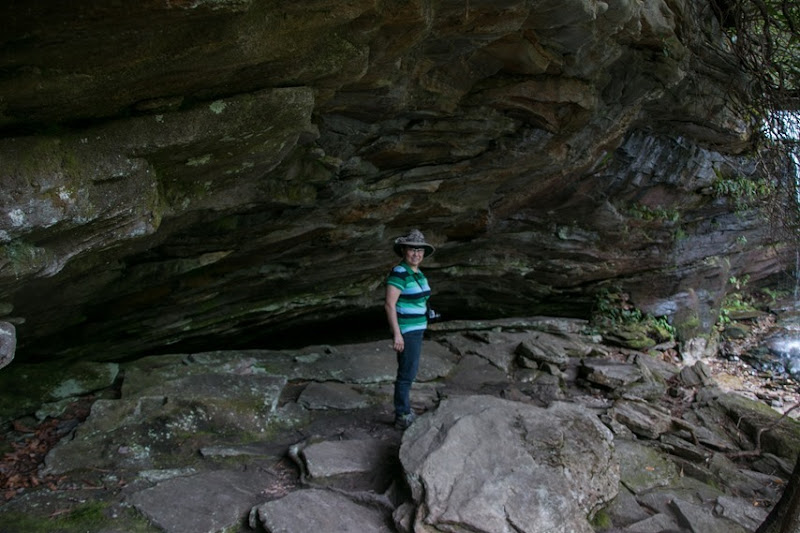 And then just enough room underneath that you didn’t get splashed. 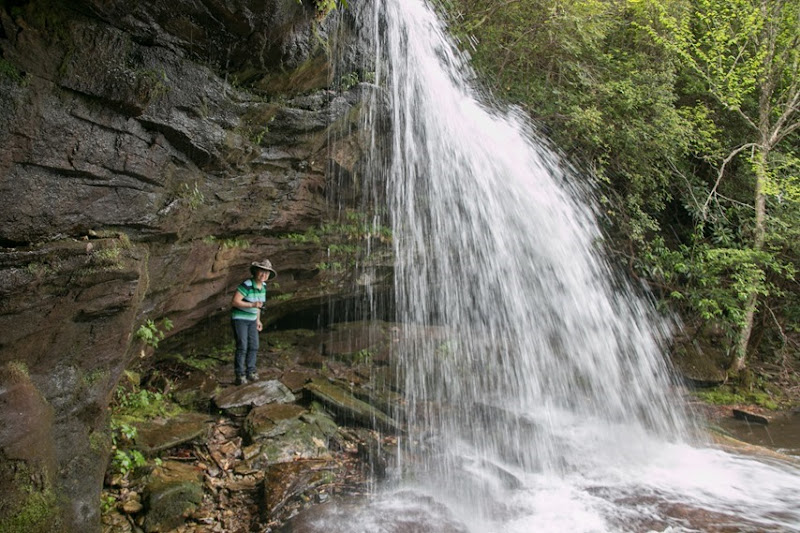 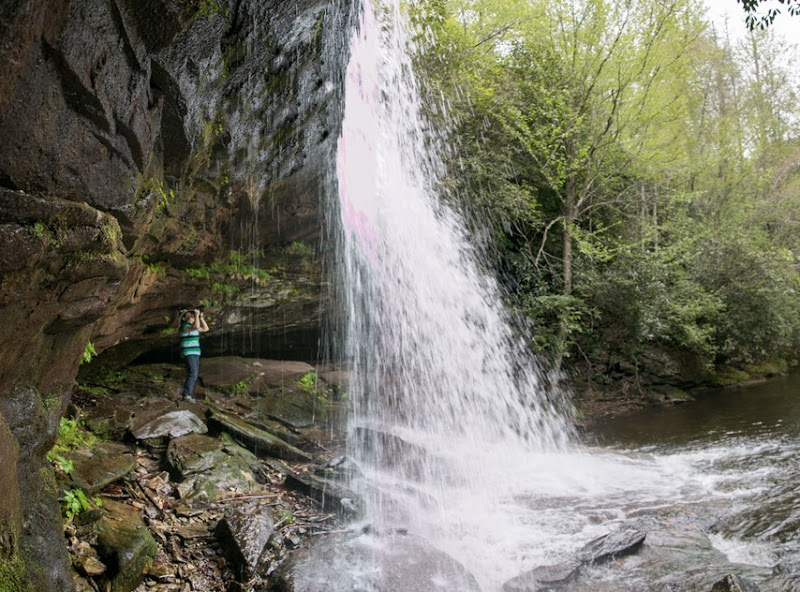 Later a group of about 8 hikers came by. They stopped in front of the waterfall for a few minutes, then hiked in a line around and behind the falls. I really don’t like hiking in groups because I always feel rushed. It looked like everyone wanted to stop behind the falls but couldn’t because there was someone in line behind them. 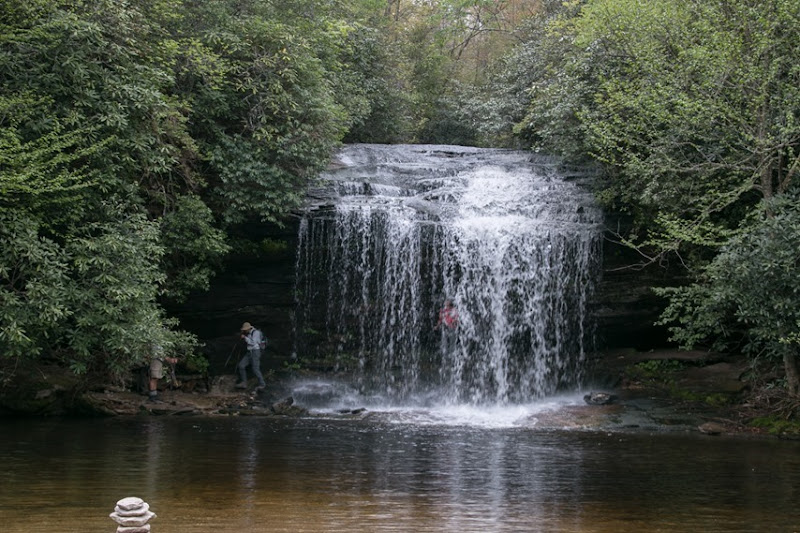 We enjoyed the bit of sun that we did get. We just had some snacks because we were still quite full from breakfast. 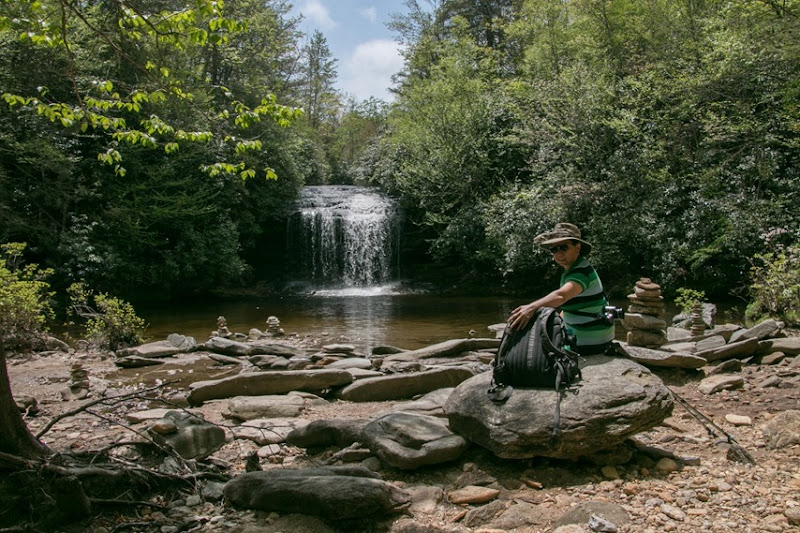 We had a few visitors. 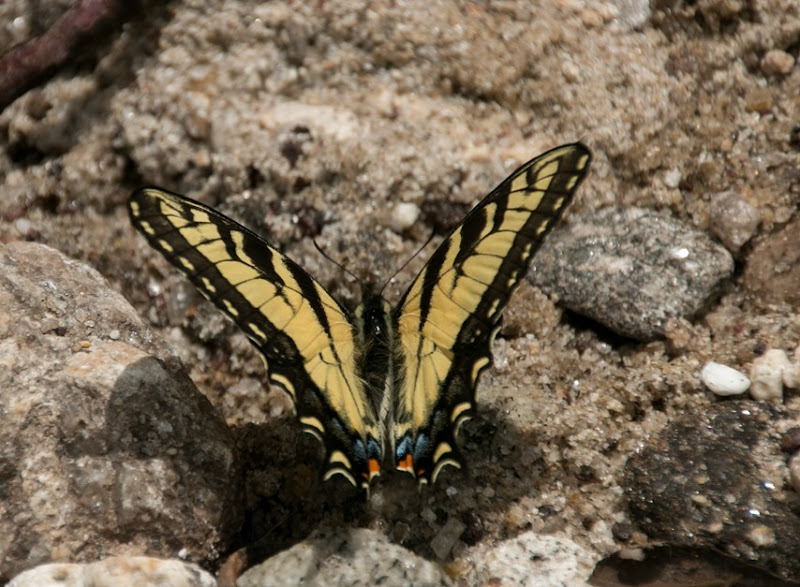 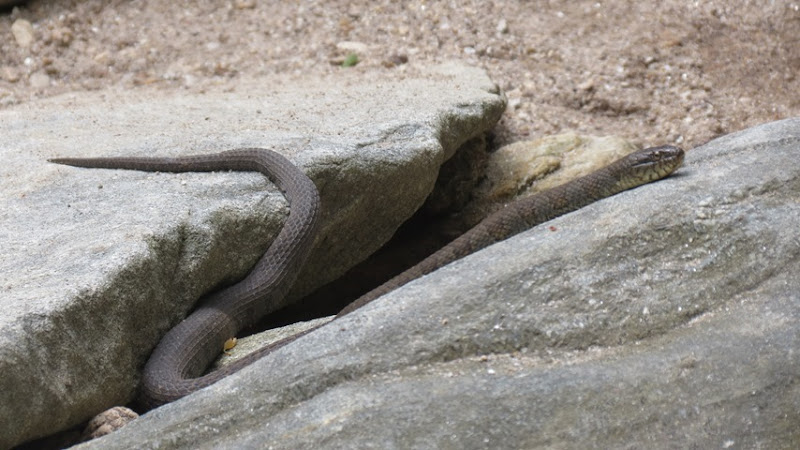 One last look before we headed back. 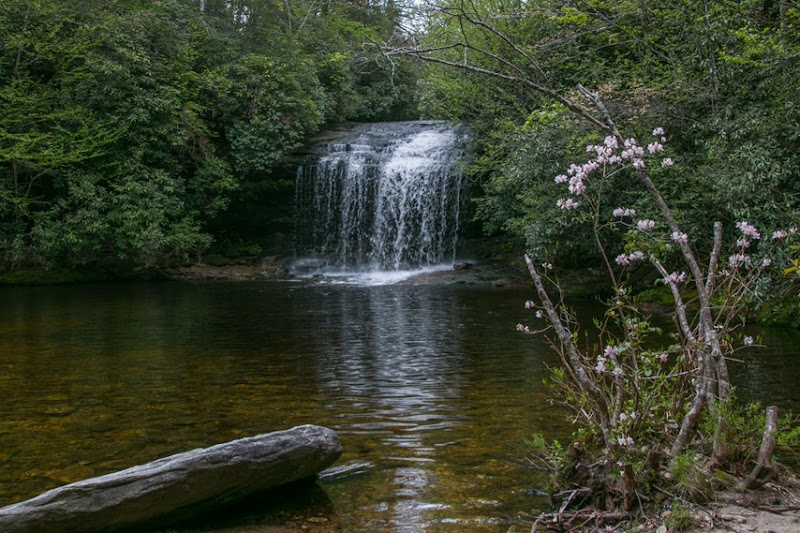