Today we went on a sternwheeler cruise down the Chena River. I had bought a 2 for 1 coupon book of Alaska attractions for $99. The ticket for this trip was $54 so we have already saved half the price of the book and we will use it a lot more times.

It rained most of the day and this was probably our worst choice of the days we were here to take this trip but it didn’t work out too badly. The boat is covered and the rain died off when we got off at the halfway stop. 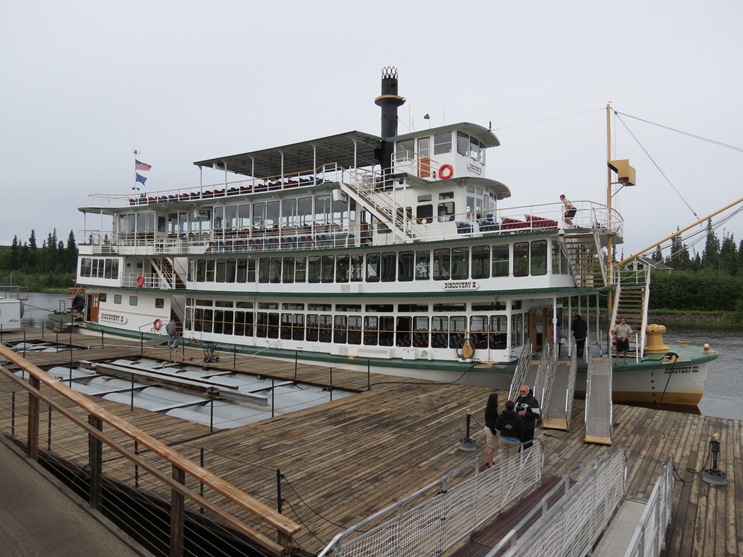 A few of our close friends from the bus tours joined us. 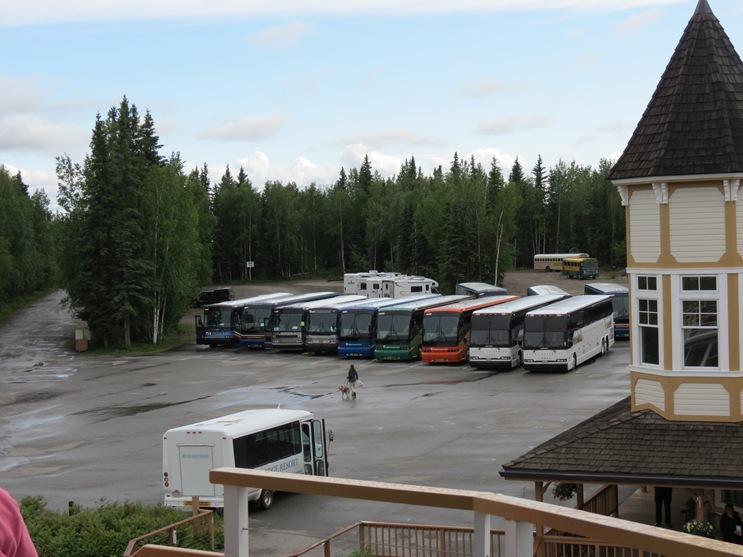 They have no extra charge (I won’t say free) coffee and donuts during the trip. We noticed some people making very frequent trips. We think one lady ate a dozen by herself.

Out on the river they pause and have a bush pilot take off, loop around and land next to the boat. 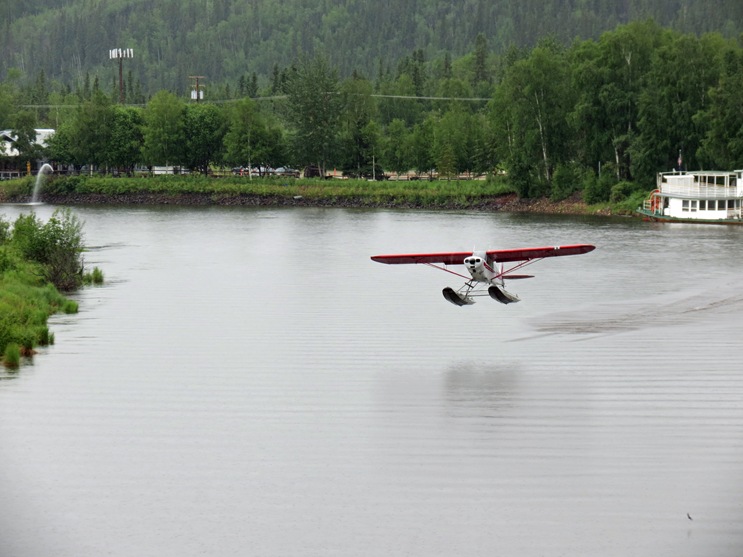 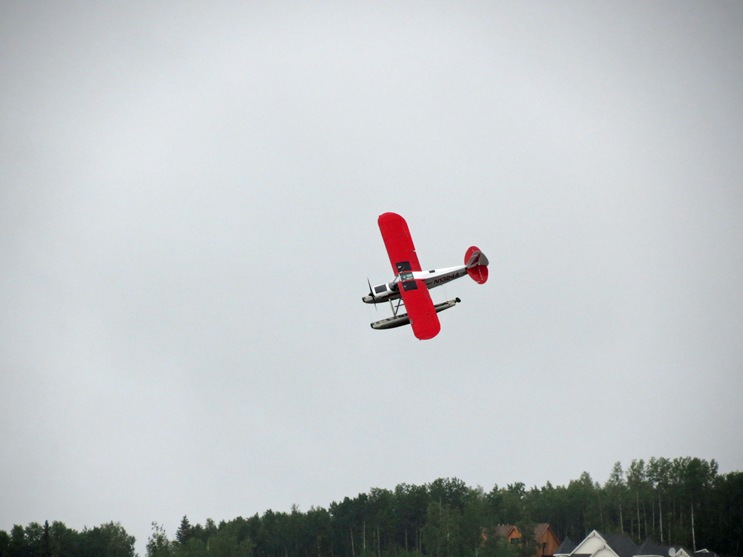 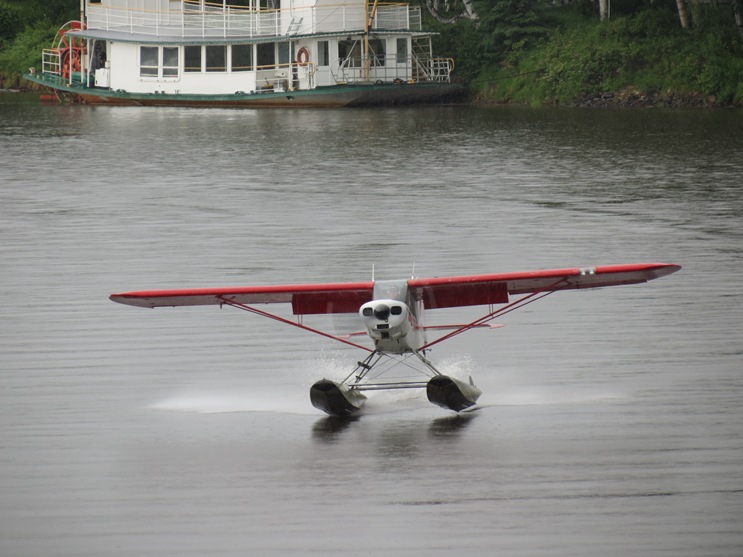 Next they stopped beside the house and kennels of a lady that had won the Iditarod dog sled race many times. She recently died but her husband keeps on the show. He gave a talk via a radio link from shore. 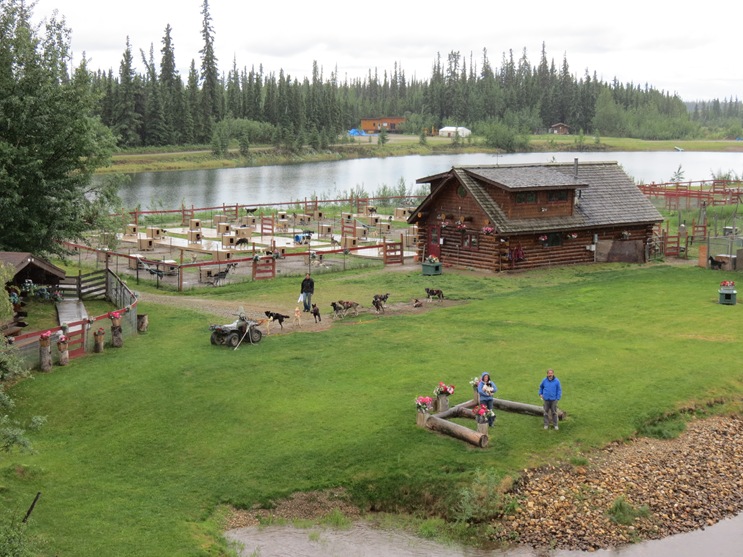 They first showed some puppies for everyone to ohh and ahh over. 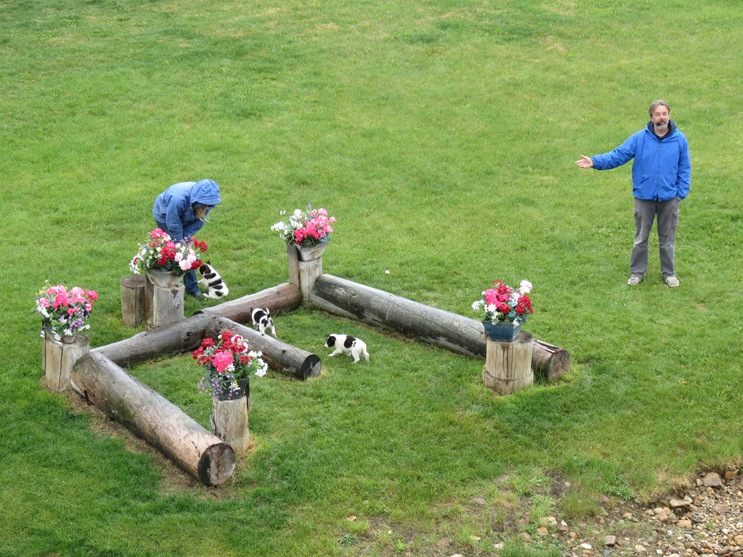 The dogs sure knew what was coming. As soon as the boat came into view they started going crazy. When the handlers started hooking them up to a rope connected to a ATV without an engine, they jumped around straining against the rope to get going. When they finally did go, all the other dogs still in the kennel ran around their houses like mad watching the ones that got to run. They seem to live for it. 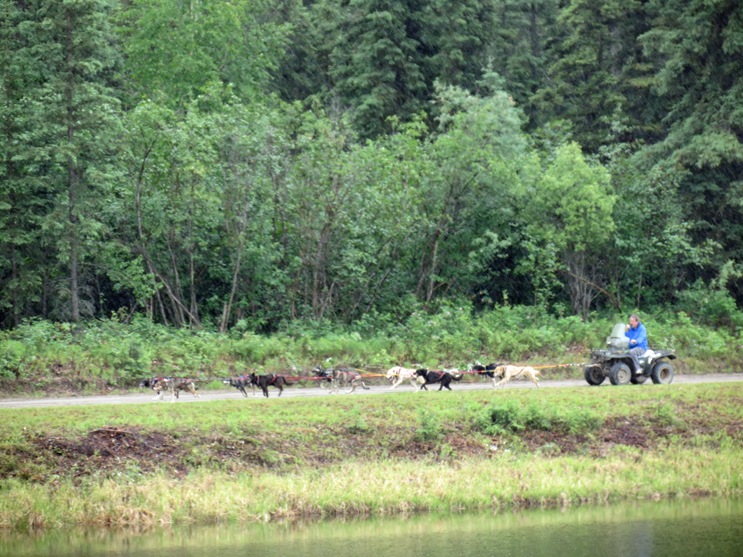 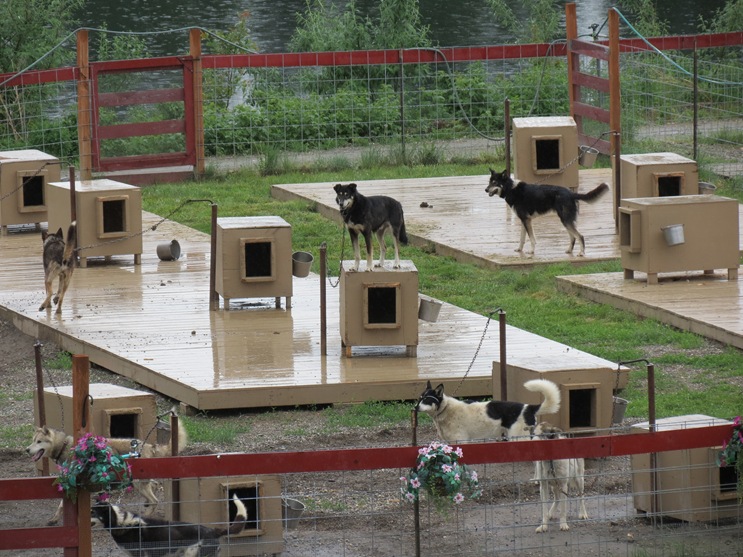 When they got back that all headed to the river for quick cool off. 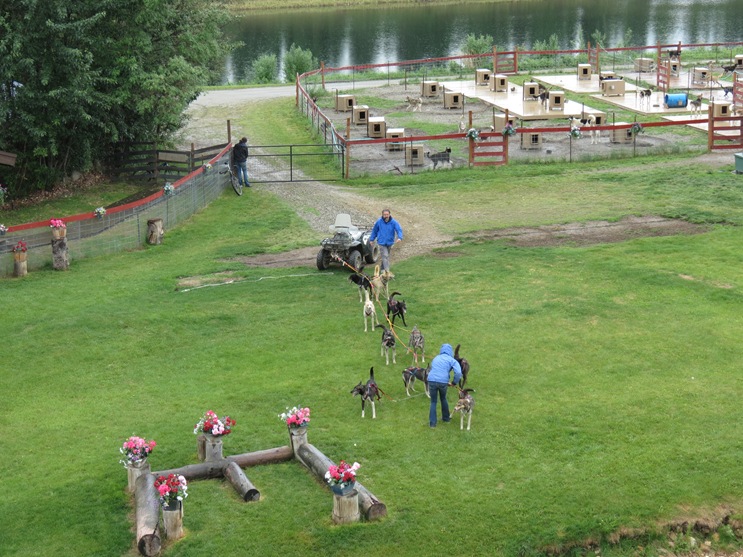 Next was a stop to see some reindeer, which are really just domesticated caribou. I don’t think we can use these to make a checkmark on our large animal list. 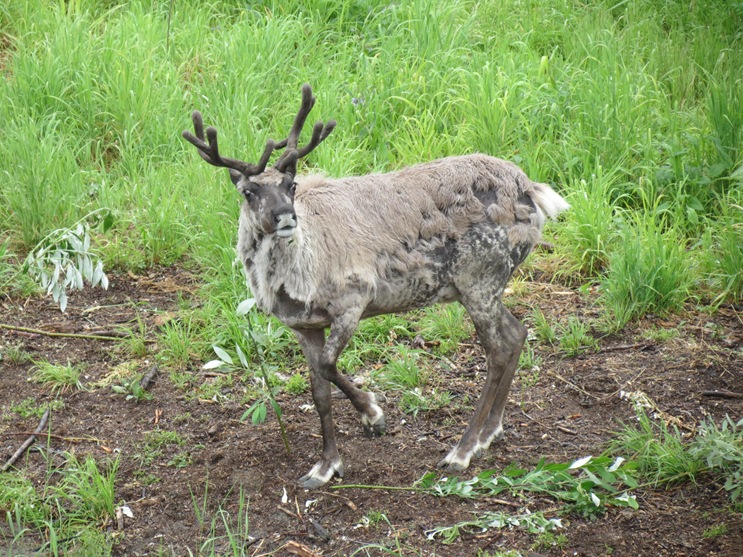 At the next stop we all got off the boat for some talks and demonstrations about life in an Athabascan native village. First was catching, filleting and drying salmon. They used a fish wheel, like the one in the front of the picture, that would literally scoop the fish out of the river as it turned due to the water flow. 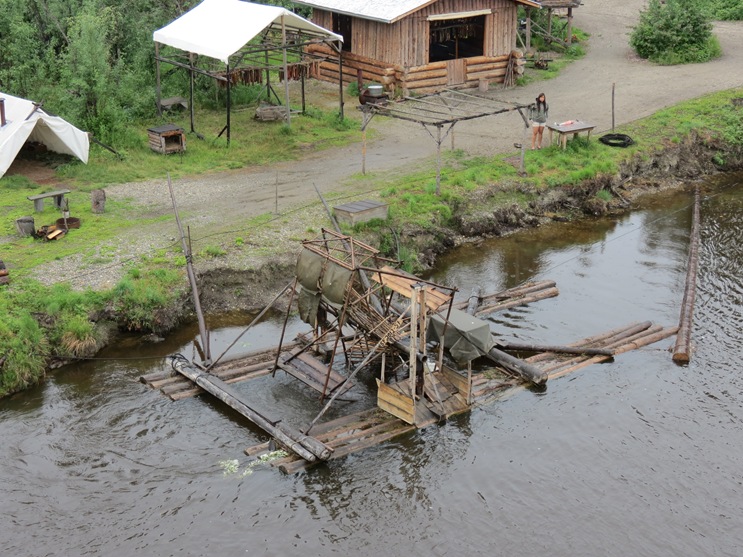 Next a talk on how they made clothing out of the animal hides. 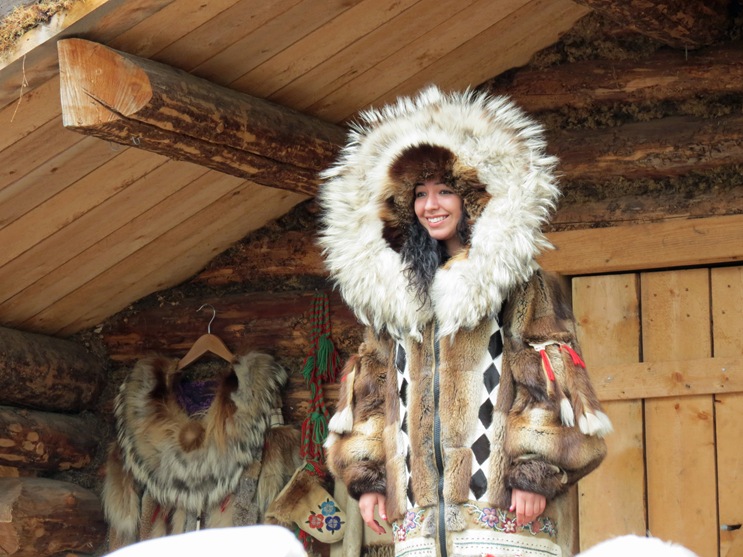 Another talk was on life in the village. 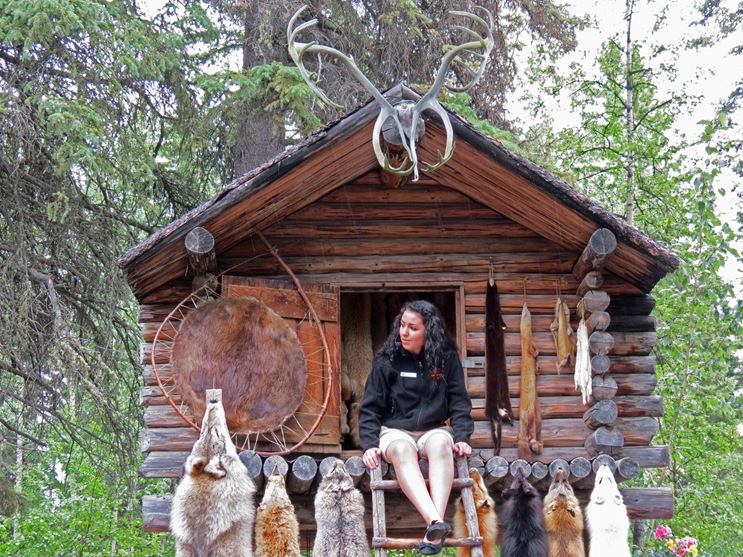 There were a lot of people but they were very organized. They even gave us rain ponchos and foam mats for the wet benches. 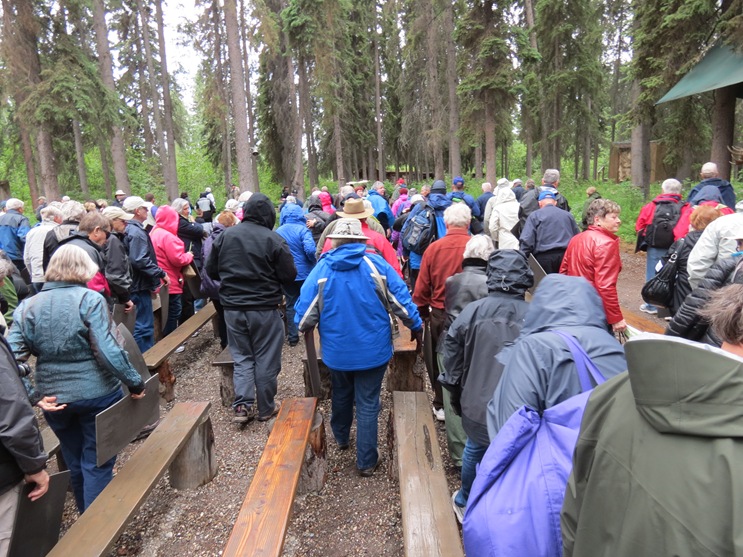 Then you could just wander around for a while and then it was back on the boat for the ride home. 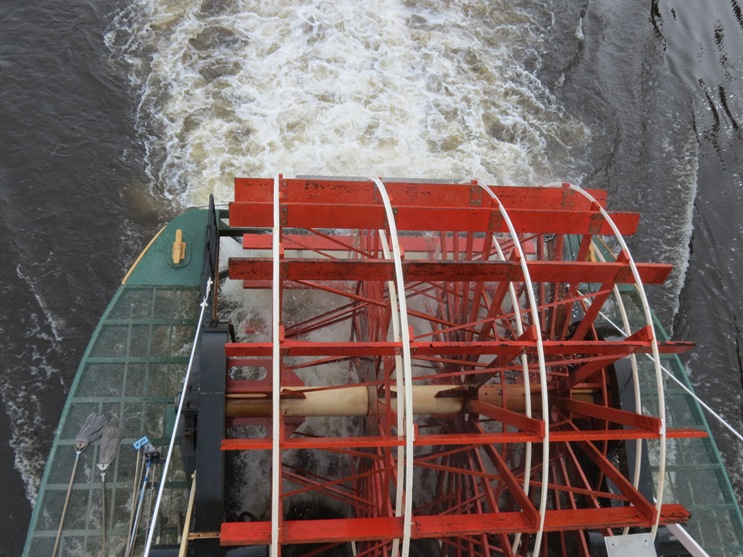 The wind came up a bit and it was colder on the way back but we stayed outside rather than going in the heated cabins. 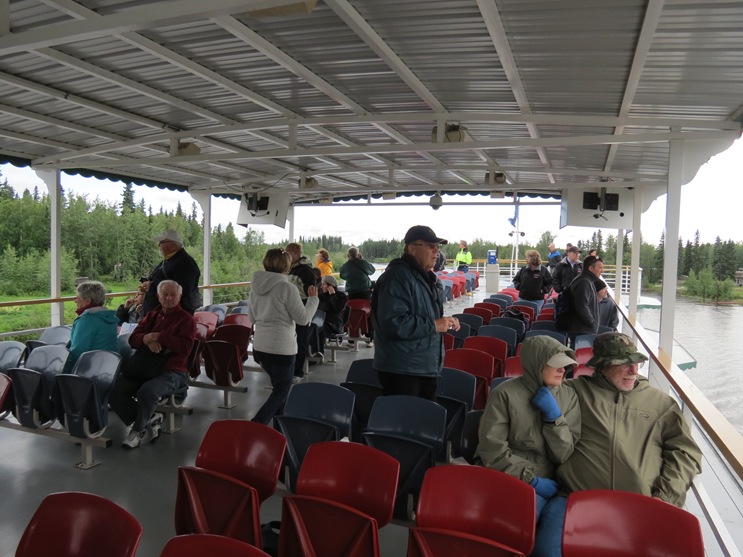 The riverside must be the prime real estate in town. There were some huge homes that all looked very new. 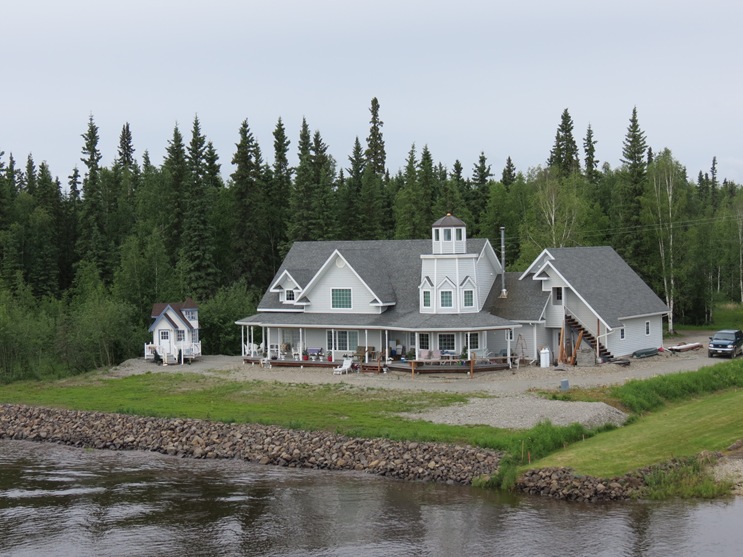 Check out what we assumed was the playhouse. 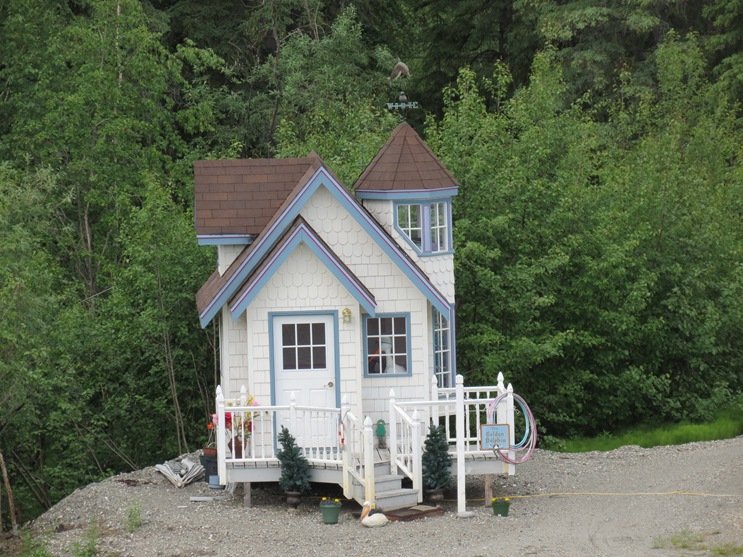 It was a bit touristy for us but still an enjoyable way to spend the afternoon.

Fairbanks marks the farthest north we will go on this trip. Tomorrow we head south to Denali National Park. There is only one 90 mile long road into the park. Private cars are not allowed after mile 15. You must take shuttle buses. They say the trip to the end and back takes about 11 hours. There are shorter trips.

There is a campground at about mile 30. The one exception to the no cars rule is if you have a reservation at this campground. Even then you can only make one trip in and one trip out at the end of your stay and you must stay at least 3 days. We are booked here. We can’t even take the CRV. We have to leave it at an entrance parking lot. There is certainly no internet there so we will be out of touch until we head out.