As predicted it was a lousy day weather wise.

When we got up it was low clouds and just kind of grey. I hope there was not much to see as we drove the rest of the Parks Highway to Wasilla, where we stopped at the Walmart to stock up, as we were starting to run low on groceries.

It looked like Wasilla was surrounded by mountains but we could only see the bottom bits. You could tell it would be impressive if it was clear. Just outside of the city we got our first view of the Pacific Ocean for this trip, as we crossed over the end of Cook Inlet.

Onward south to Anchorage, the highway was 6 lanes wide and very nice because, I think, a lot of people live in Wasilla and work in Anchorage.

There is no highway through Anchorage. Once you hit the city limits you are on city streets with lots of traffic and stop lights. I only got caught in the wrong lane once and had to drag race a school bus away from a light to get over to make a turn. I think I annoyed him because he tried to get in front of me as soon as he could.

We are not stopping in Anchorage. There is not much in cities in general that interest us and the view from the road through town was not very impressive. 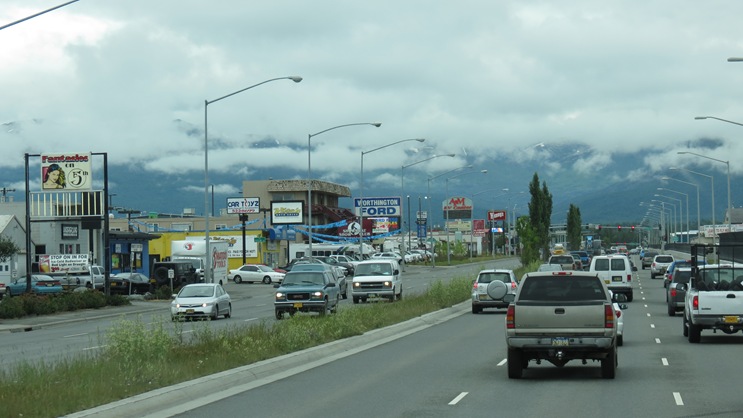 South of Anchorage we are on the Seward Highway that starts along the eastern edge of Turnagain Arm, which is a 65 km long bay off of Cook Inlet. They say it is called Turnagain because Captain Cook went into the other arm at the end of the inlet and then had to turn around again when he entered this one and found it was also a dead end.

Being Sunday afternoon the line of cars and RV’s heading back to Anchorage was almost constant. In the picture below you can see the white dots of the RVs far off into the distance. RVing is very popular here. 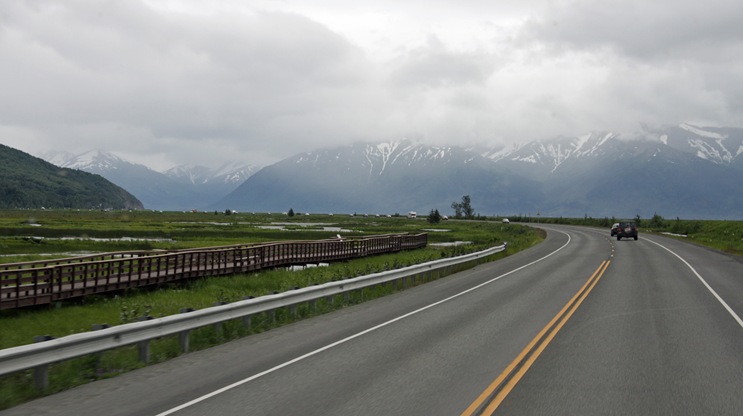 There are mountains on either side and the road runs right along the water’s edge. It was about here that it started to drizzle. The also wind got pretty fierce, I guess due to the funnel effect of the mountains, making the RV a bit harder to handle. 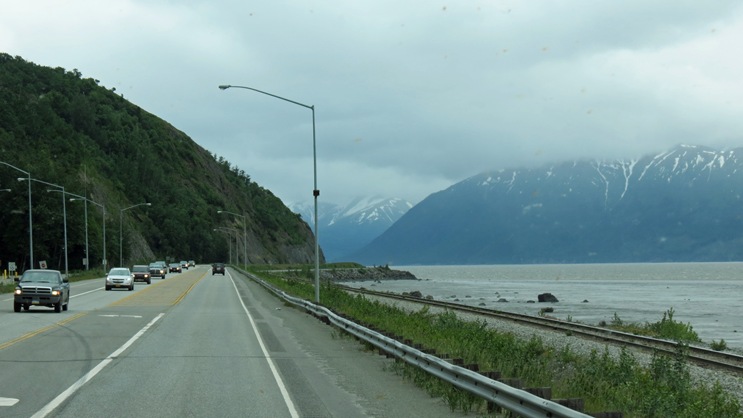 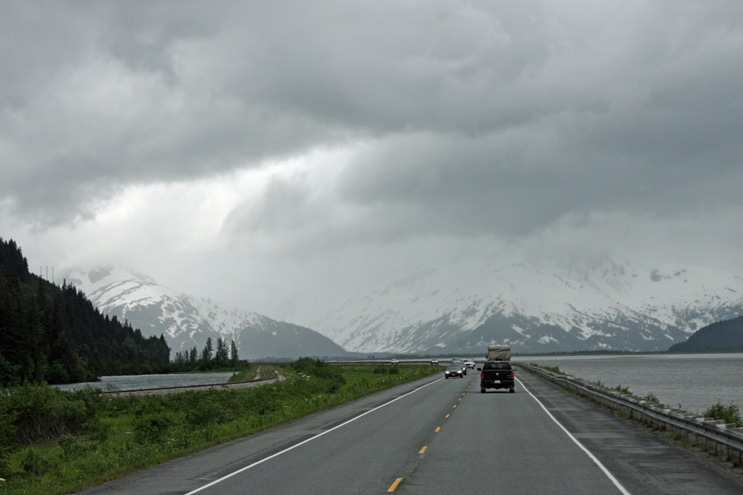 Turnagain Arm is very wide and very flat. After very low tides as the high tide starts to come you, it is one of the few places in the world that gets a tidal bore. This is a single wave across the width of the arm that is sometimes large enough for people to surf.

There are warning everywhere about not going out on the mud flats. They say there is lots of quicksand and since it is so flat the tide comes in very quickly and a lot of people have gotten trapped and drowned. 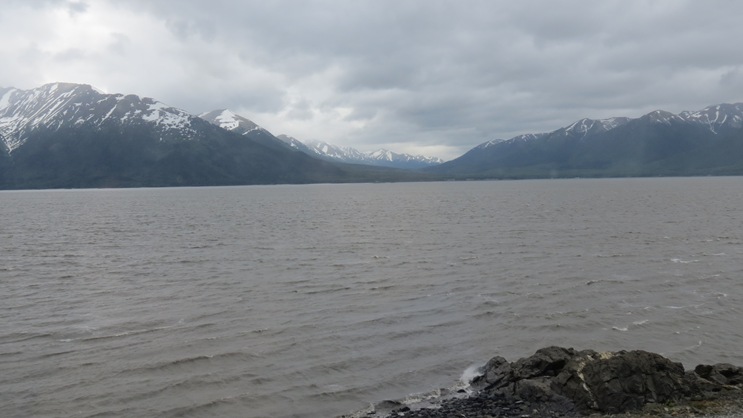 We have to come back this way so I hope the weather is better on the return trip. 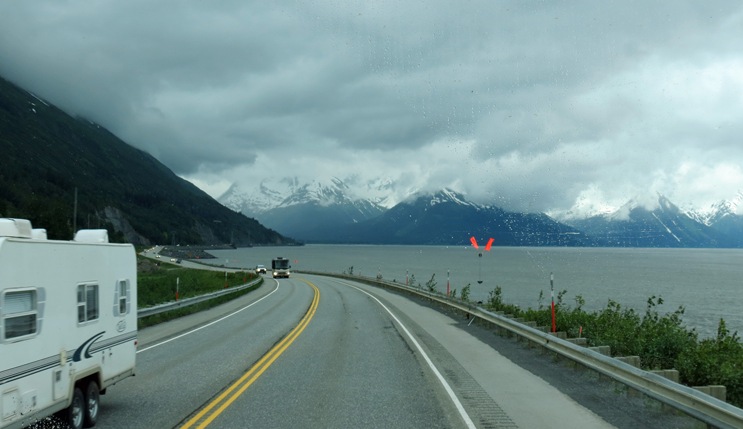 At the end of the Arm we turned off the Seward Highway onto the Portage Glacier Road which eventually goes to Whittier. We stopped about 4 miles in, at the Williwaw Campground in the Chugach National Forest. This is a great campground in the narrow Portage Valley with mountains close by on either side. Unfortunately the rain and wind really let loose. 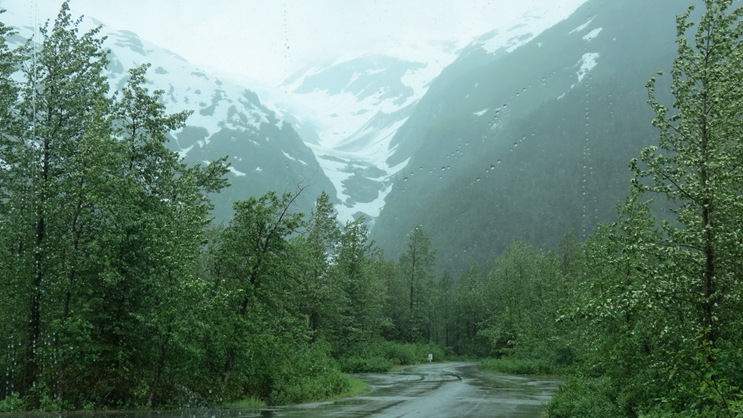 Looking up at the mountain sides I could see the sheets of rain moving sideways.  It is still a nice view out our front window. 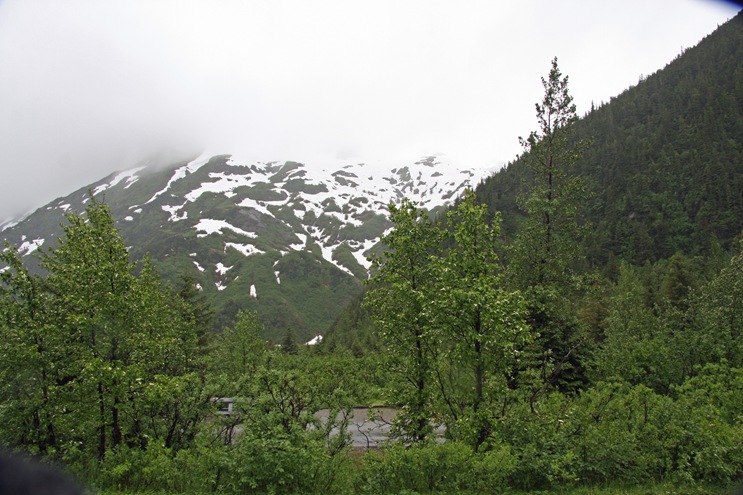 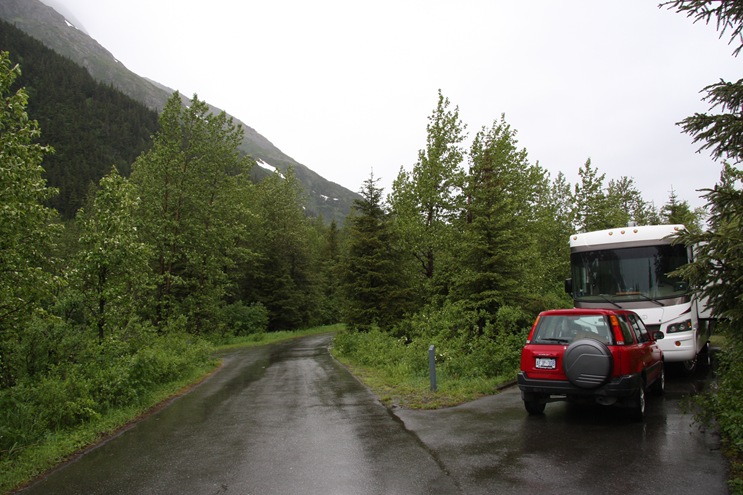 With all the snow so close and the general greyness of the weather it almost feels like we are winter camping.

After getting setup we went down the road about a mile to the National Forest Visitor’s Center. It is at one end of Portage Lake. The lake was created as the Portage Glacier receded and melted. There are always ice chunks floating in the lake that have come from the glacier. 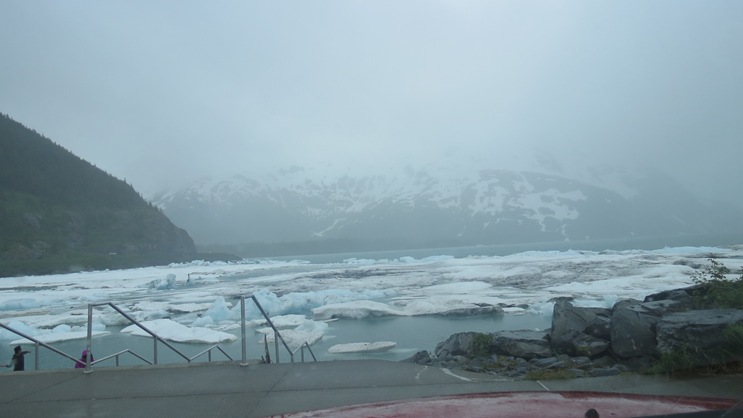 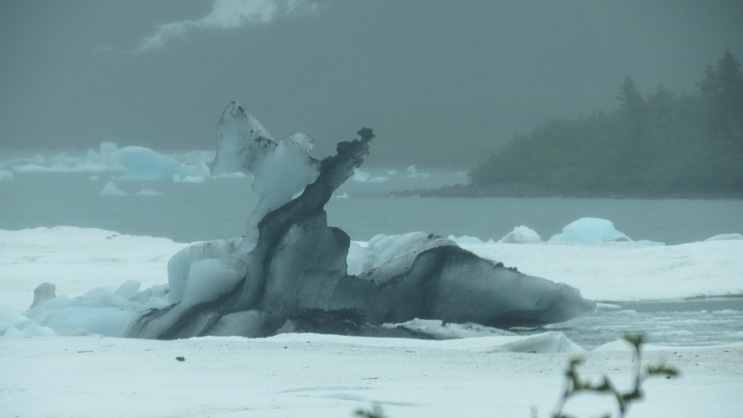 At the center we watched a movie about glaciers and then looked at some very good exhibits about the area..

There is a company that runs tour boats out to the far end of the lake to see the glacier. It did not look like it would  be a fun trip today. It was really cold out now. 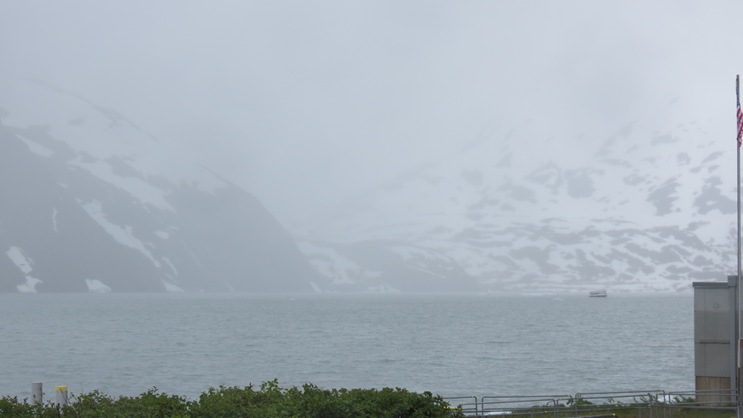 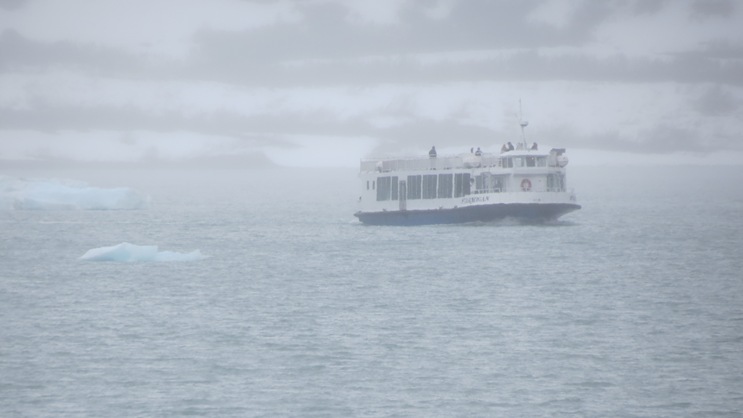 We have 2 for 1 coupons for this tour but I think we will save our money. There are longer tours in some of the other places we are going to later, hopefully in better weather.

One the way back we saw a moose and its baby just across the road from the campground. The picture is blurry because they looked up, saw our bright red car and decided to head for the hills. 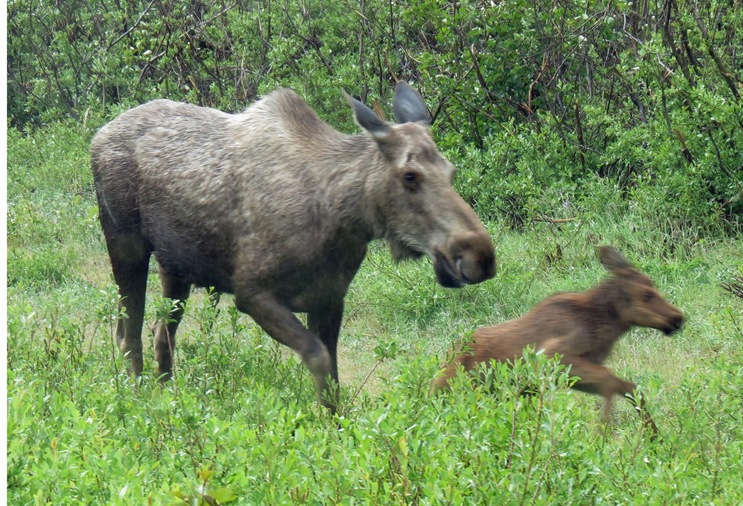 Back at the RV, as we have no hookups here, we snuggled up with the propane heater and read books for the evening. This heater is great. It gets the place warm really quickly  We have to turn it to low because it can get too hot in here. Being an infrared heater if we want to quickly warm up we just sit in front of it and watch the patterns dance across the catalytic pad. 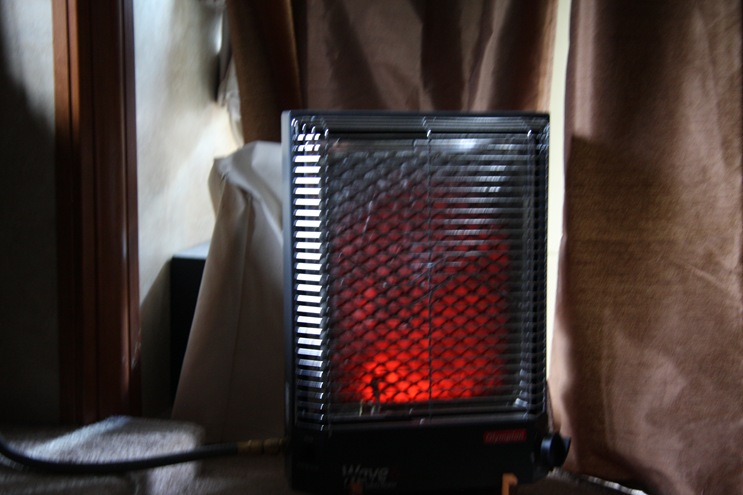 The rain continued to beat down all evening.