We had an easy day today. We woke up to bright sunshine but looked out to see that we were in a hole surrounded by darker clouds on all sides. We ended up being in and out of the sun all day but there was no rain, which is very good.

We went to the Alaska Islands and Oceans Visitor’s Center in Homer. There were a bunch of interesting displays about the Alaska Maritime National Wildlife Refuge and the general Homer area.

At 11am they had a guided walk out at nearby Bishop’s Beach. 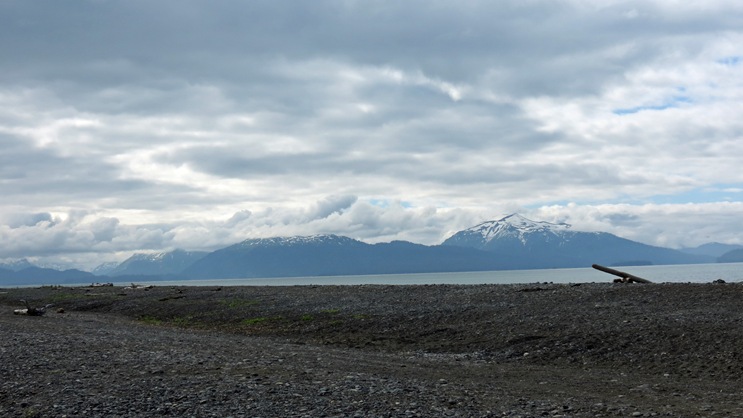 We did the 10 minutes hike down to the beach to meet the guide who was a biologist that seemed to have worked everywhere. She spent time in Maine, the southern states and some summers out in the Aleutian Islands learning native crafts and lore. 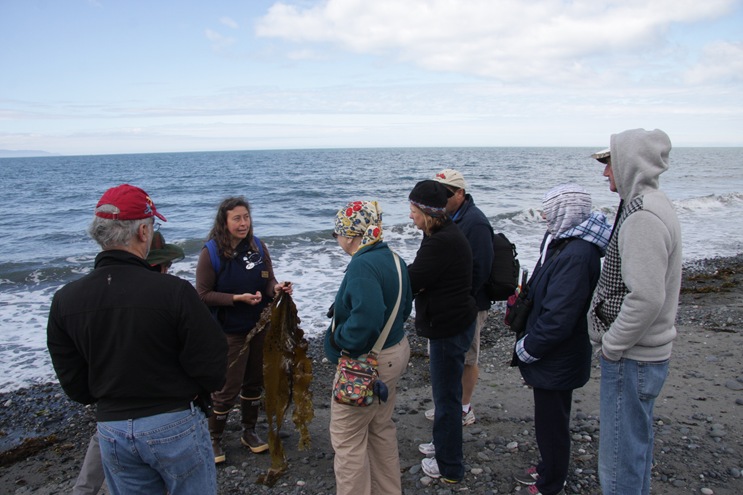 It was too bad that high tide occurred exactly in the middle of the walk because there are much more interesting things to see below the hide tide mark. Maybe will will go back when the timing is better. She talked about the seaweed, the geology of the area and some of the plant life. The guide’s 8 year old daughter came with us and spent the time busily collecting samples for her mother to show us.

As you can see it was a bit cold when the sun went away. 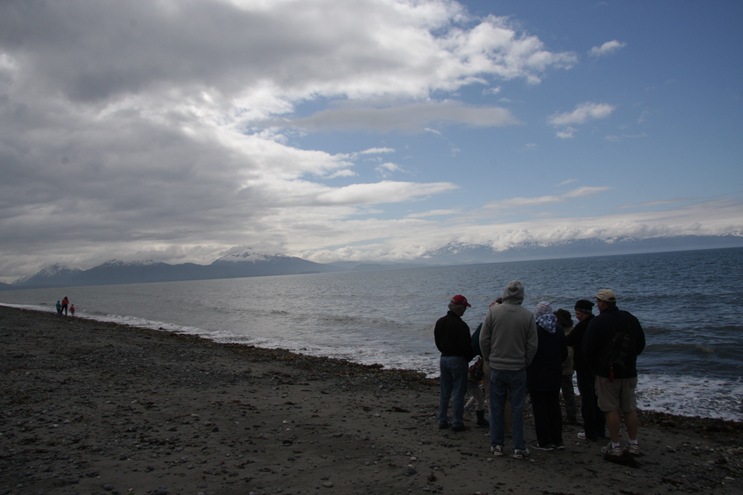 One of the people on the tour spotted a fin out in the water. We all stared for a while and managed to see about 3 more. The guide said they were Orcas or killer whales. The fin would only pop up for a second so you had to be fast and looking in the right direction. She also said this was the first time she had ever seen them on a guided walk. We were definitely not fast enough for a picture.

Off in the distance we could just barely see the plume from one of the volcanoes. The clouds obscured the actual mountain which was about 70 miles away. 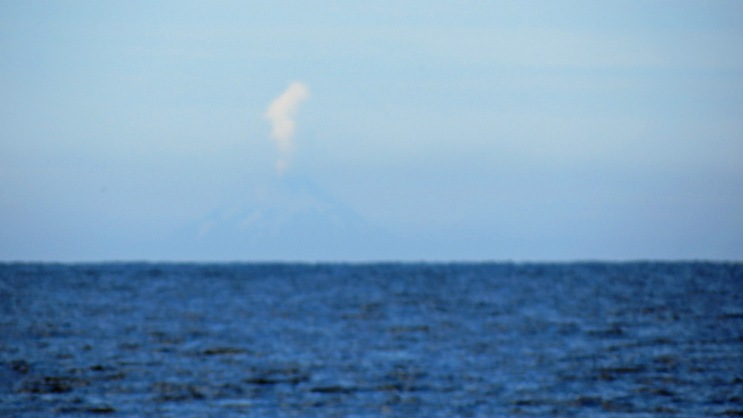 One interesting thing is that there are coal seams in the white cliff at the end of the beach in the picture below. 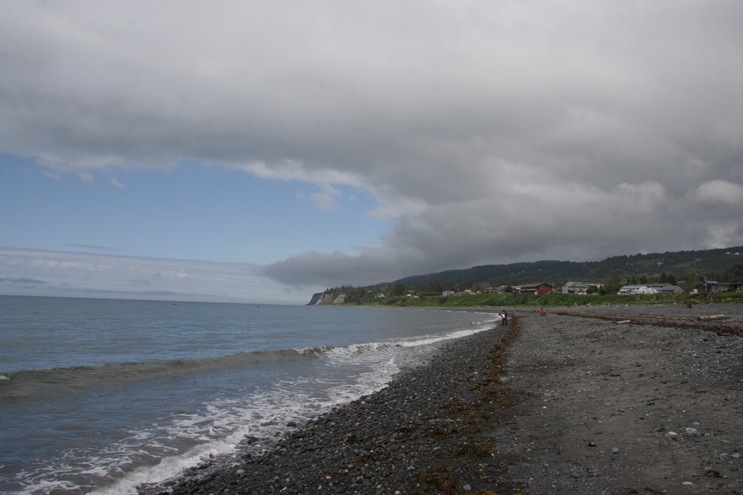 The wave action is eroding the cliff so the coal falls in the ocean and eventually washes up on this beach. The guide said that years ago that half the population of Homer would heat their homes just by coming out to the beach to collect the coal chunks. The coal is very low grade and smelly when you burn it though so people would switch to more environmentally friendly fuels when they could.

The coal is the reason Homer is here at all. There are huge amounts of it and it was mined for a short while but because of the low quality that did not last.

After the walk Jennie went off down the beach collecting rocks while I just stared out for a while. 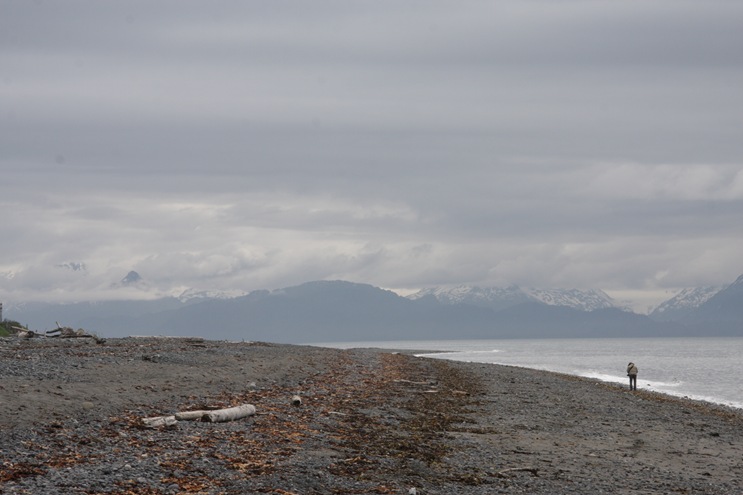 WAY down the beach. 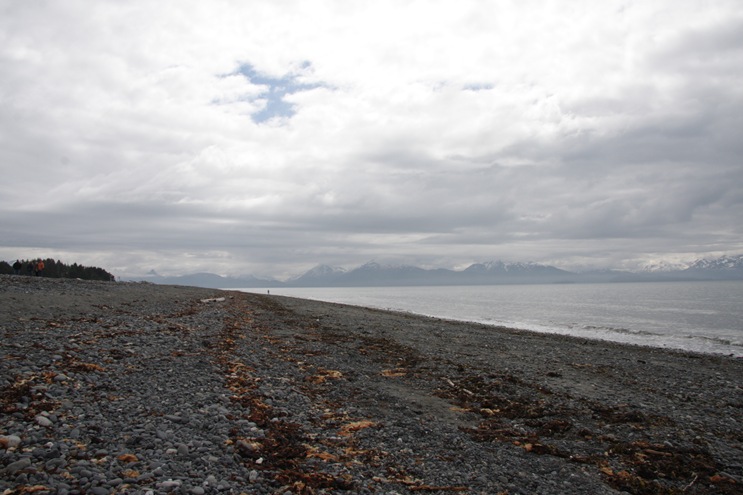 The walk back to the car is through a wetland called Beluga Slough, on a sort of floating boardwalk. This pillars let the walk rise and fall. 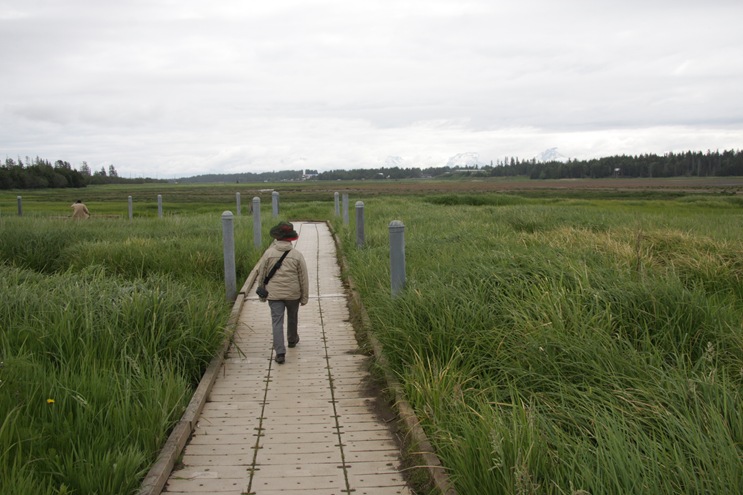 We met someone sitting part way along saying they had seen a moose and that there were some Sandhill Cranes close by. There were a couple about 100 yards away. 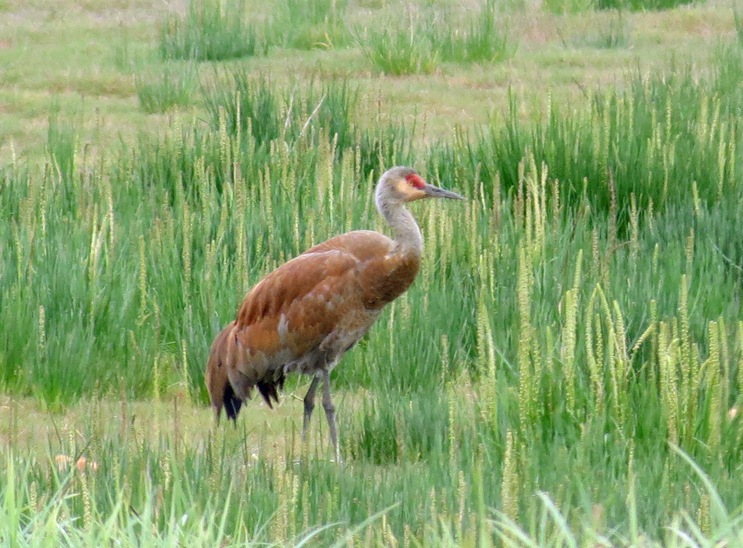 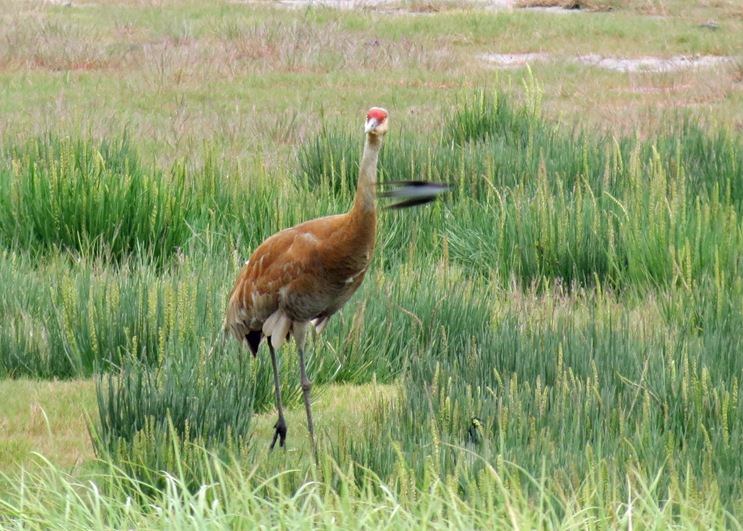 And then a mother and young way off in the distance. I love the zoom on this camera. 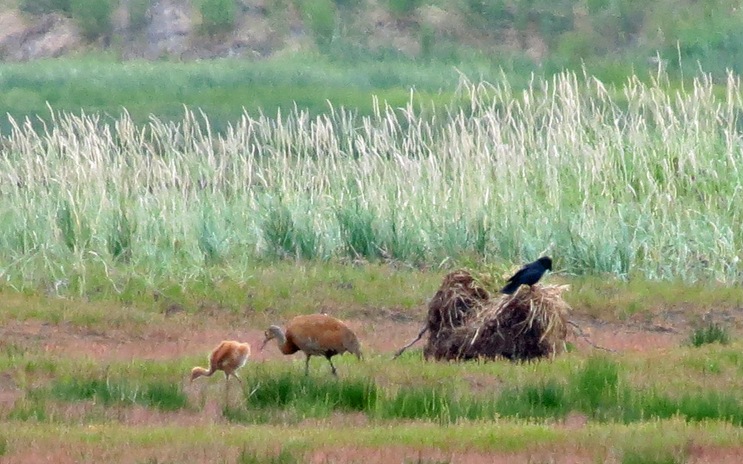 The moose showed up in the parking lot when we got back to the car. 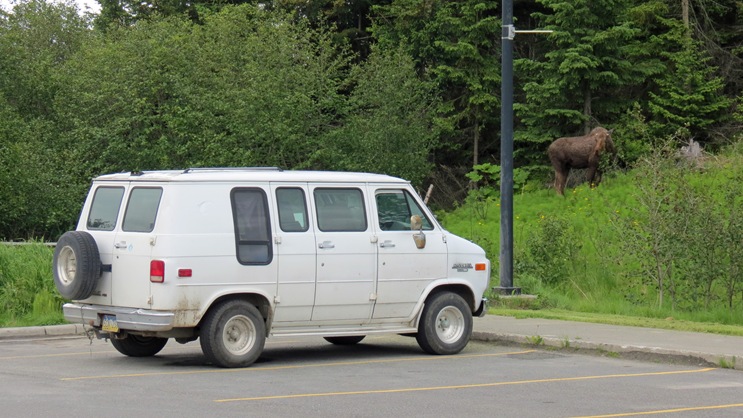 We had lunch in the car, went back and finished seeing the displays and then went to the town visitor’s center to get some info on some local hikes.

I went for a short walk around the harbour. 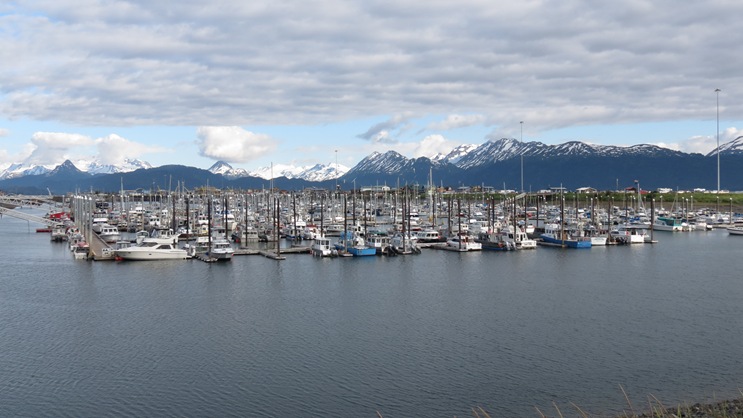 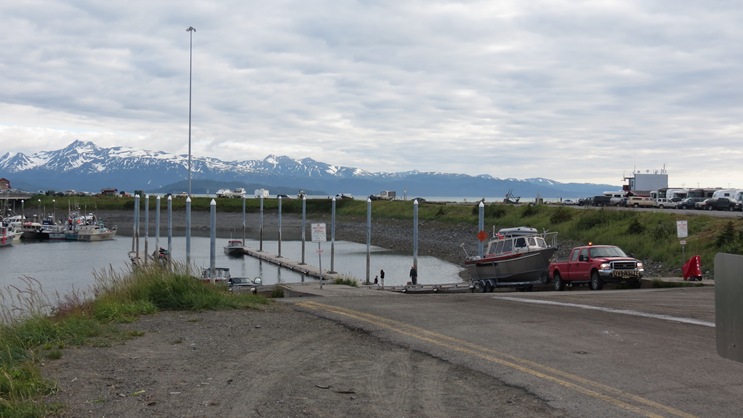 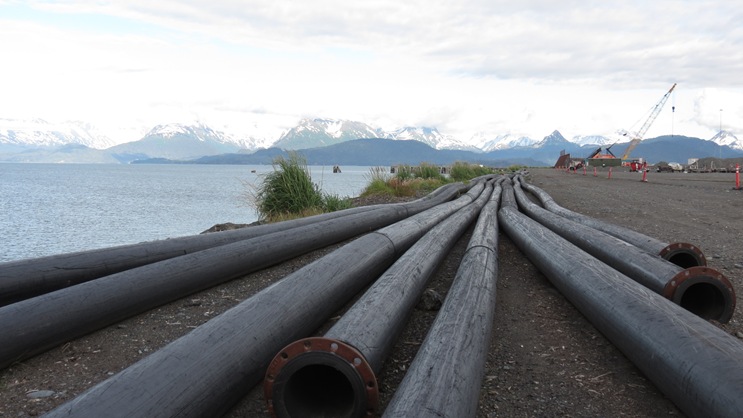 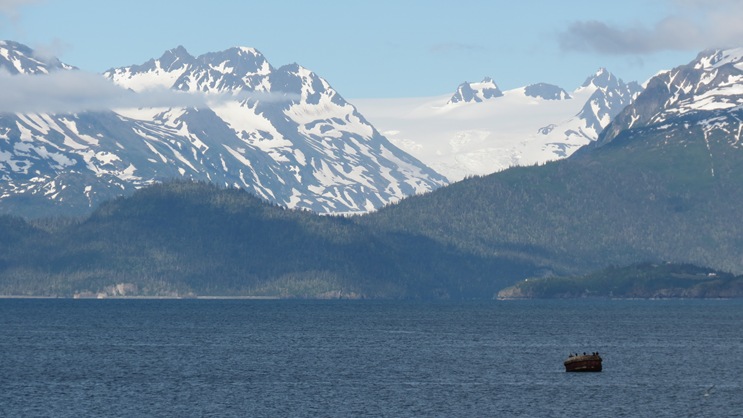 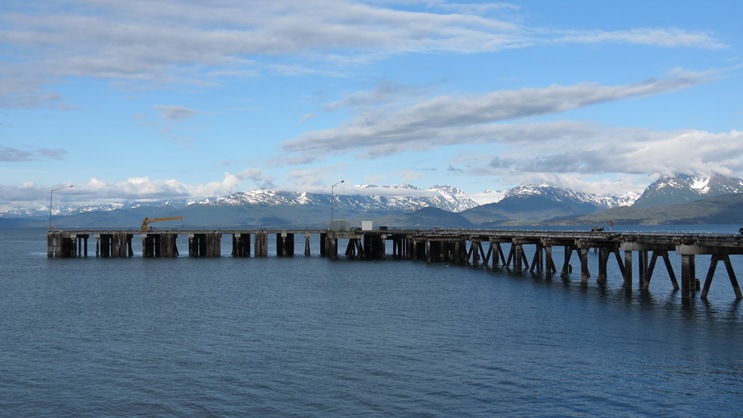 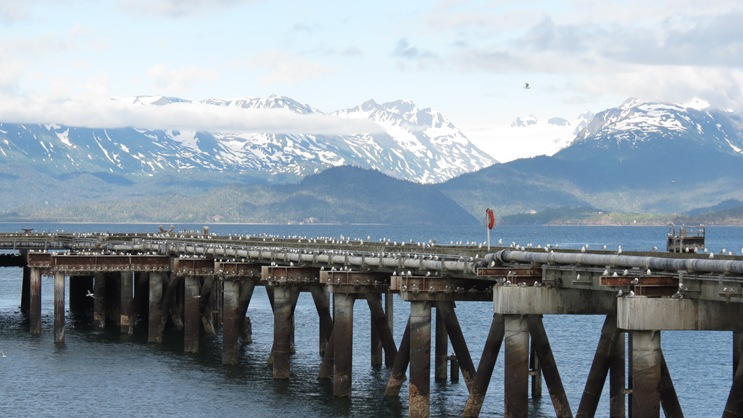