Last night we had a couple of visitors to the campground.  They walked right behind our RV, munched on some leaves and then ambled across the road. 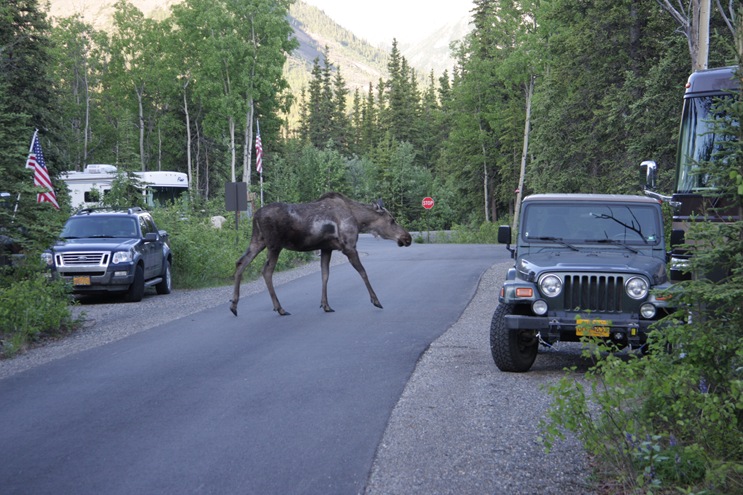 Today we tried to hike the Mount Healy Overlook Trail.  It is 1700 ft vertical in 2.5 miles. The first part is a slow but steady climb with your destination looming over you. 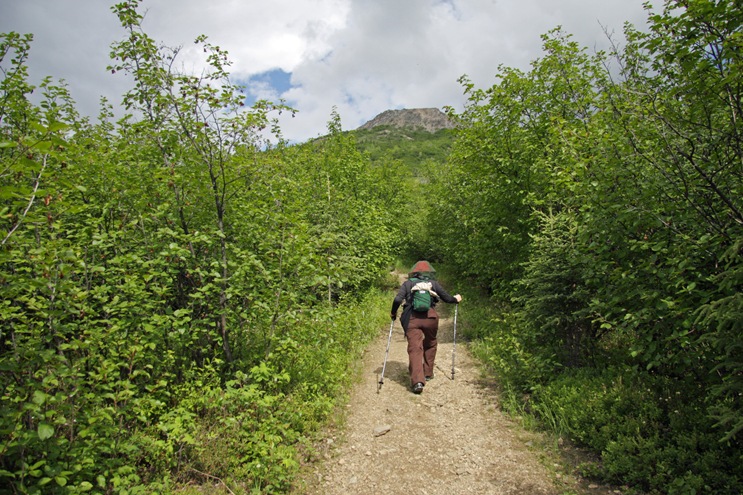 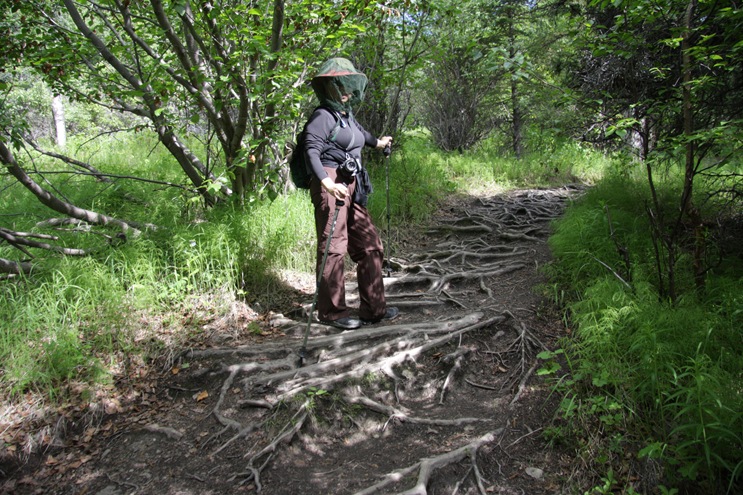 All along a line to the west of us it was raining. We were still in the sun and the clouds seemed to be moving parallel to us. We kept going but said if it started raining hard we would turn around. 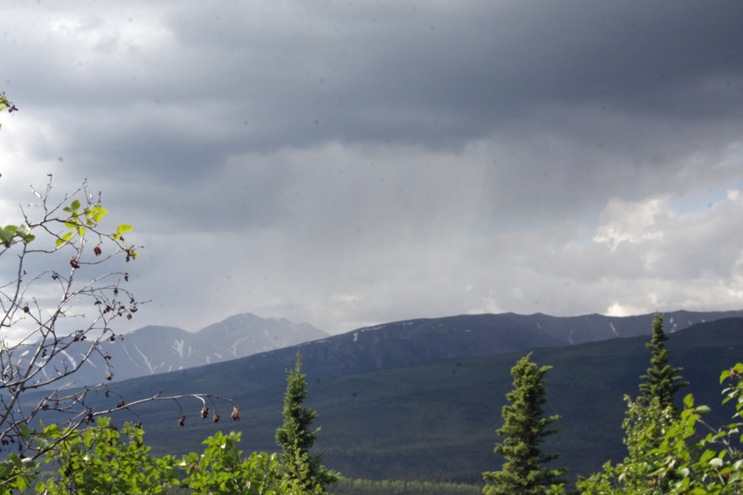 This point is called halfway rock. From here on it got quite steep with 25% grade in some places. We had lunch at this spot on the way back down. 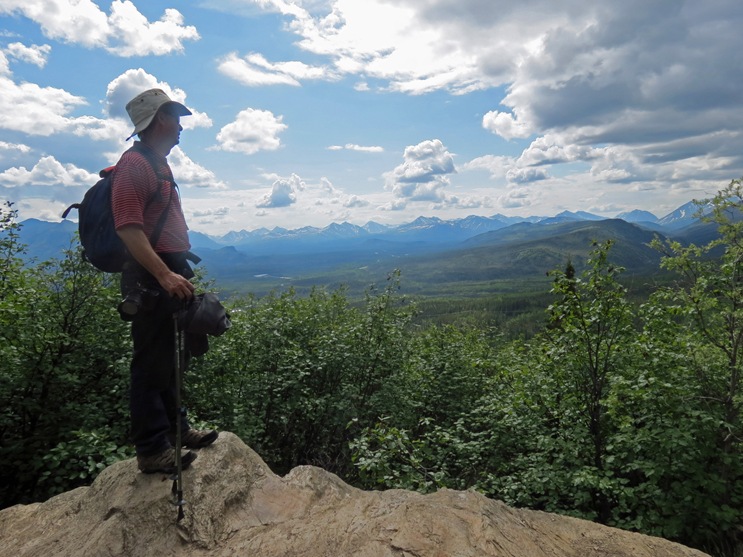 It was mostly zigzagging up the hill but quite often we would go through a cleared out spot with better and better views of the valley below. It was encouragement to keep going higher. 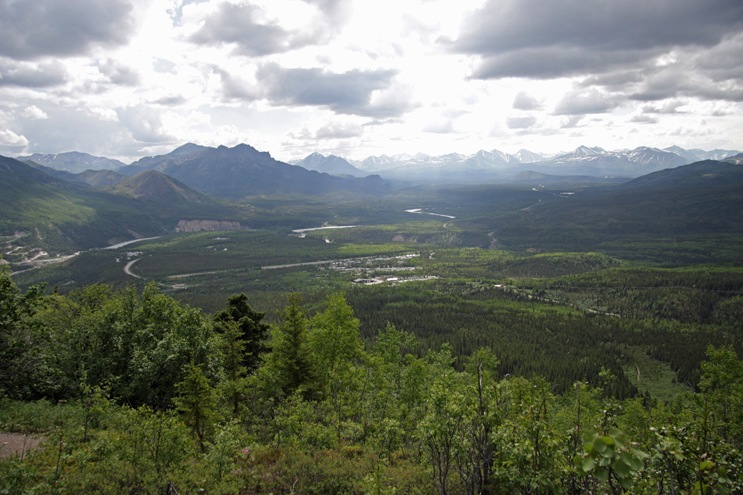 You can just see the train that runs between Anchorage and Fairbanks. 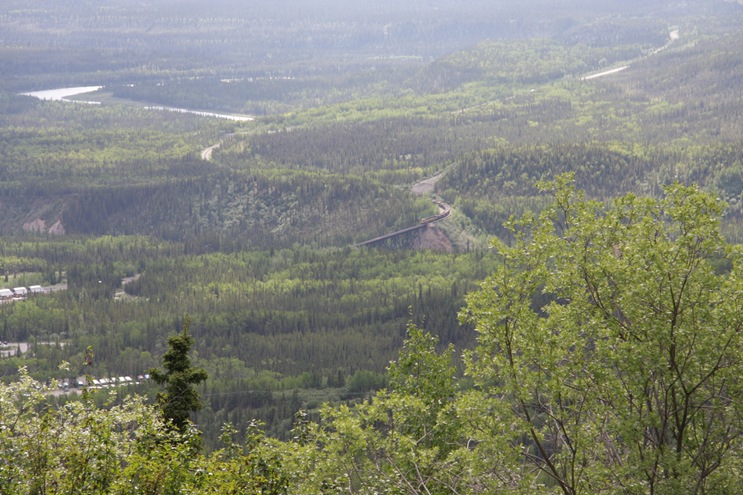 So close and yet so far. Straight line close but via the trail far. 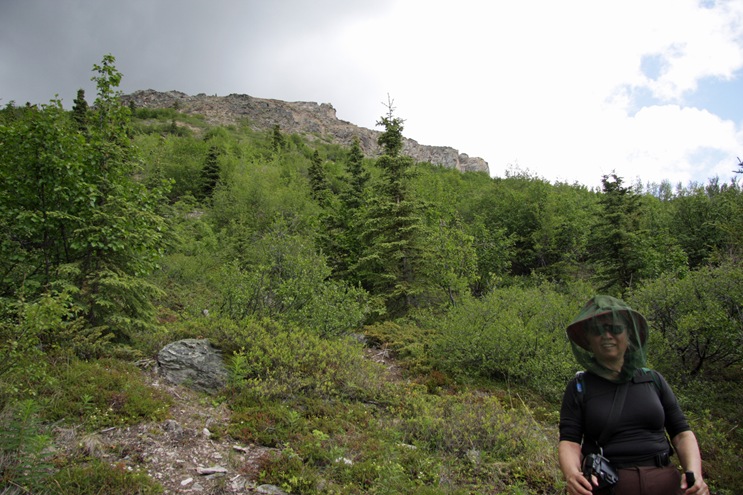 Shortly after this picture it started getting windy and very rainy. We thought about it for a bit and said if those steep trails get very wet it could be a ugly trip back down so we turned around. 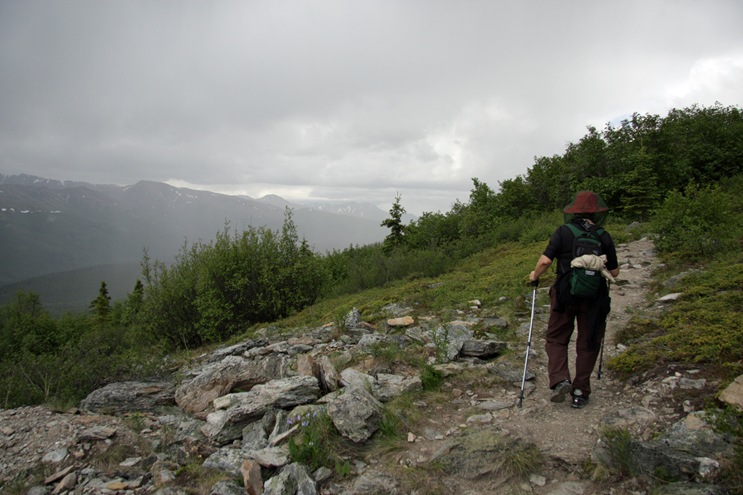 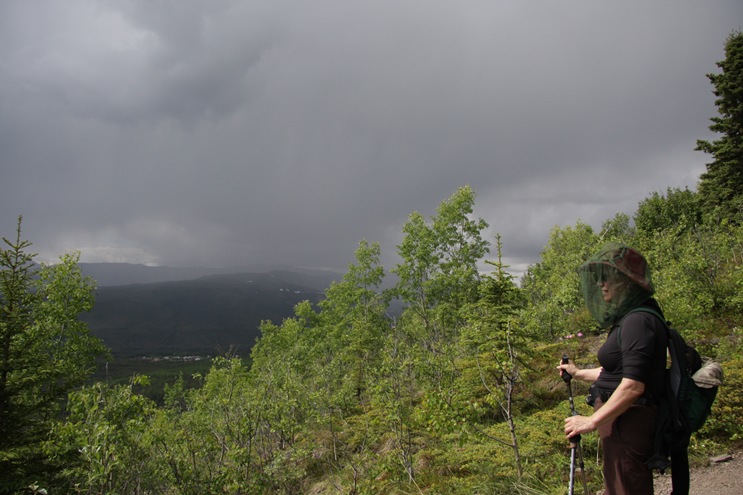 Of course after about 5 minutes it stopped and turned back to bright sunshine but by that time there was no way we were going to turnaround and start climbing again. We met a ranger on the way down that said the only thing you really did get at the top was a slightly higher view. In the picture below we got to just below the tree line on the left side of the peak. 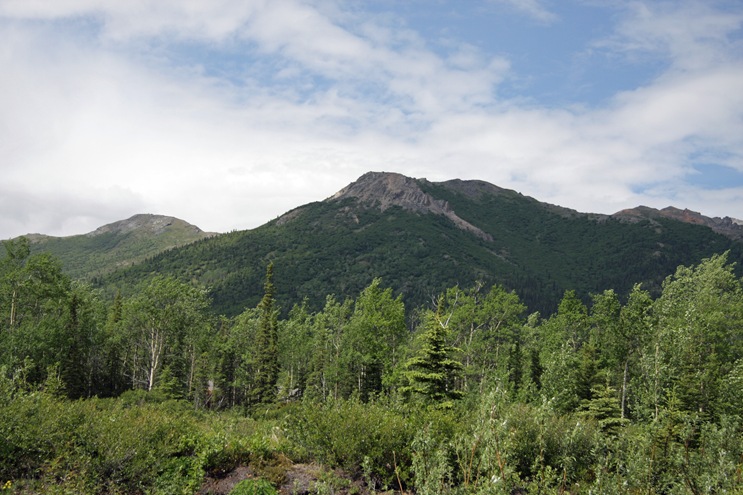 Even with the truncated hike we were still pretty tired. Time for another reward. No beer this time. 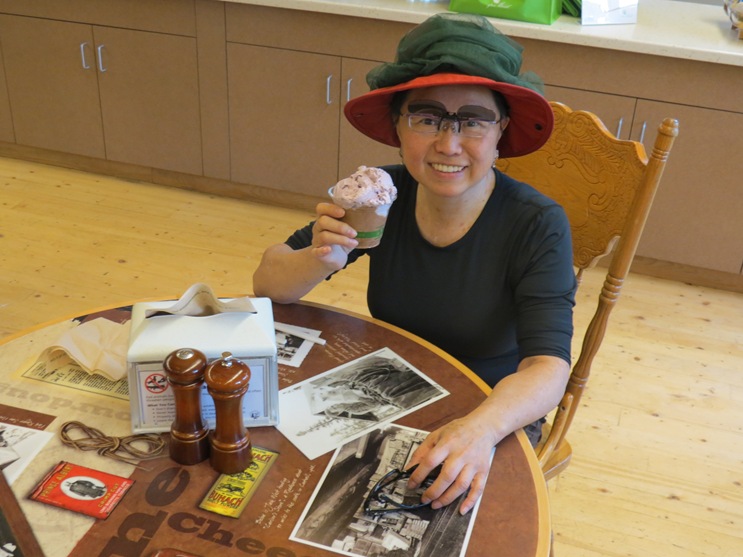 We went and saw another movie about Denali and then went to check out the line of souvenir shops just outside the park boundary. It is called “Glitter Gulch” by the locals. We had dinner at this takeout Thai food van. The green curry chicken and mandarin beef were very good. 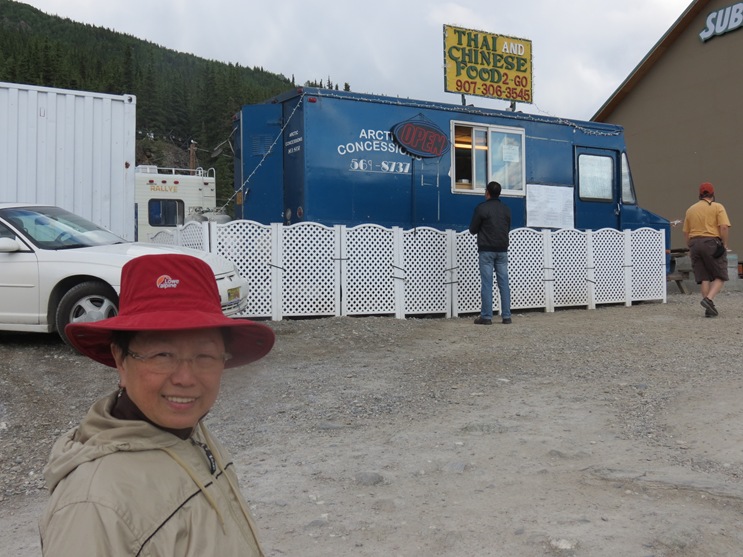 On our hike we had seen this interesting hotel perched on the far hill. 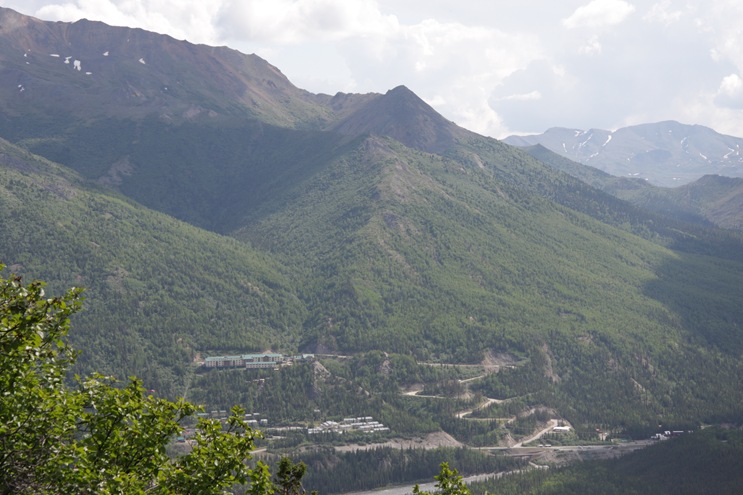 We drove up the zigzag road to check out the view. 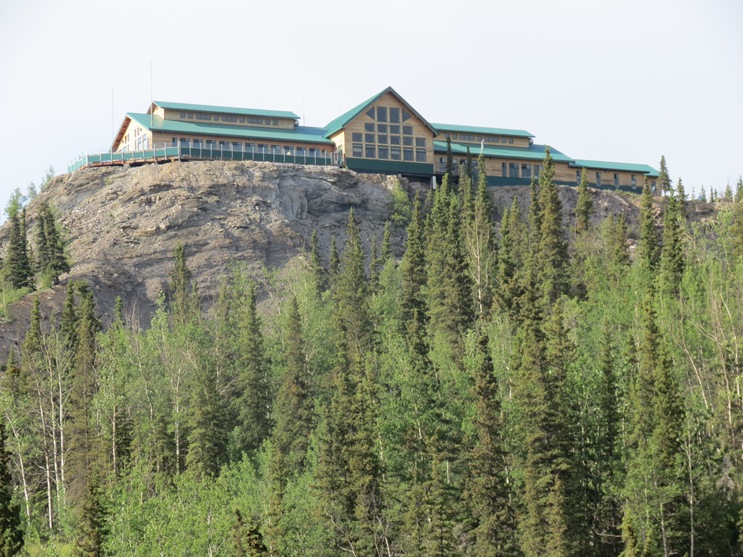 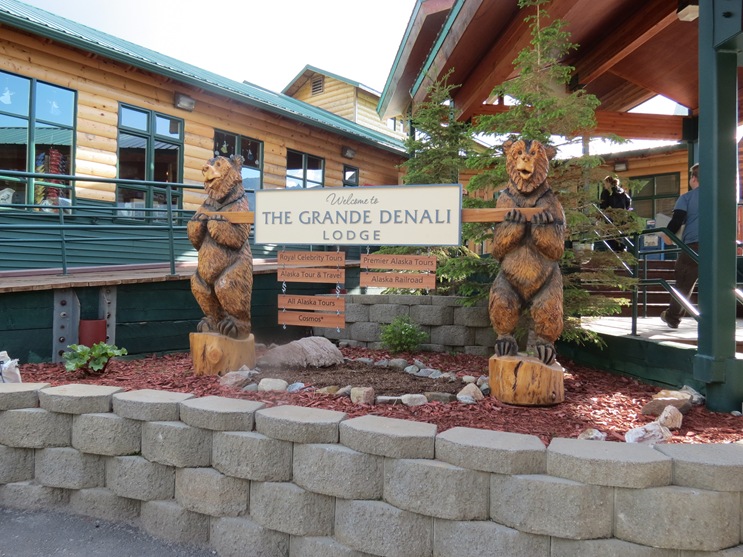 Then we watched the rafters for a while and headed home. 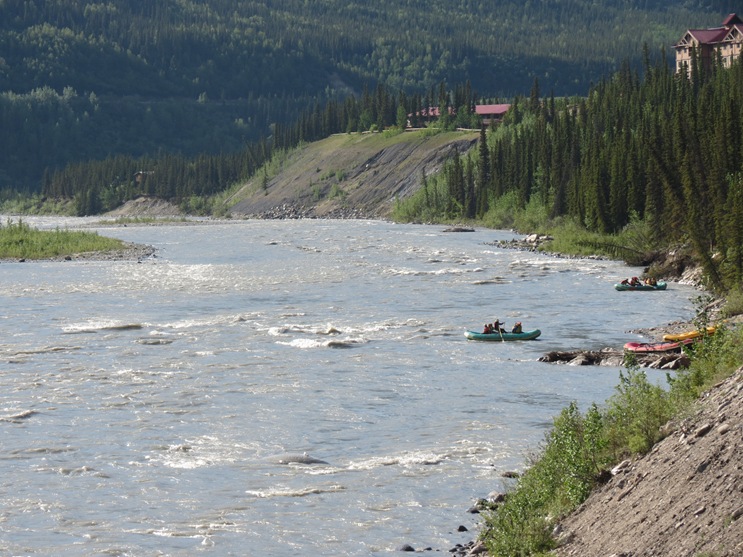