It rained very hard all night and all day today. It is very frustrating because I have been reading the brochures about the area and there are hiking opportunities everywhere. Hopefully on the way back, the weather is better and we can stop here again.

We decided to drive the few miles to the end of the Portage Glacier Road and check out the town of Whittier. To get there you first have to go through the Anton Anderson Memorial Tunnel. This is a single lane 2.6 mile long tunnel through the mountain. It is the longest tunnel in the US.

It was originally a rail only tunnel and you could only get to Whittier by train or boat. In the early 2000’s they ungraded it with more ventilation, some of which uses jet engines. They also added 8 evenly spaced safe rooms that you can supposedly get to incase of a fire or other emergency. Now they allow cars through as well. On the 1/2 hour, for 15 minutes, cars are allowed through going to Whittier. On the hour cars are allowed to come back. It takes about 5 minutes to drive through at the 25 mph speed limit so I am guessing the extra tie between trips is to allow the ventilation to clear the fumes. I think when the trains come along they get precedence for the next time slot. The round trip cost is $12 which you pay going to Whittier. 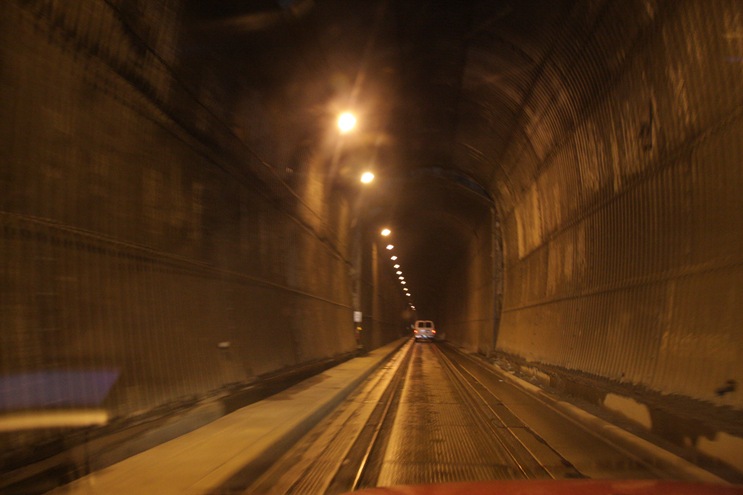 It really did seem to go one forever. 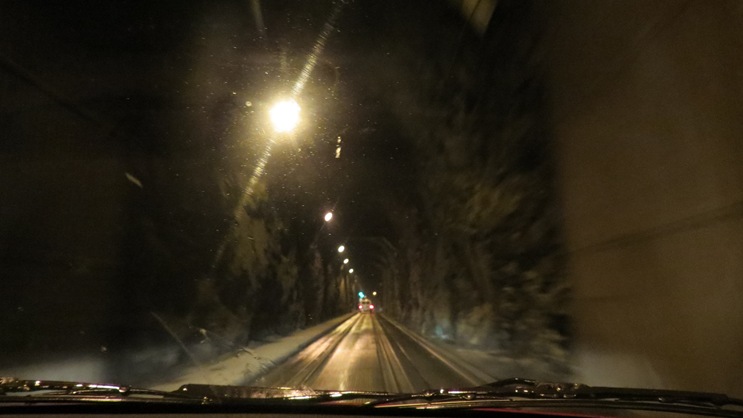 One of the safe rooms with a turnout. 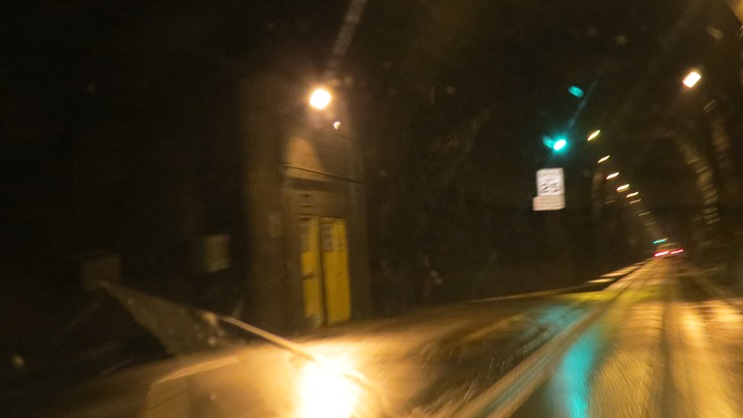 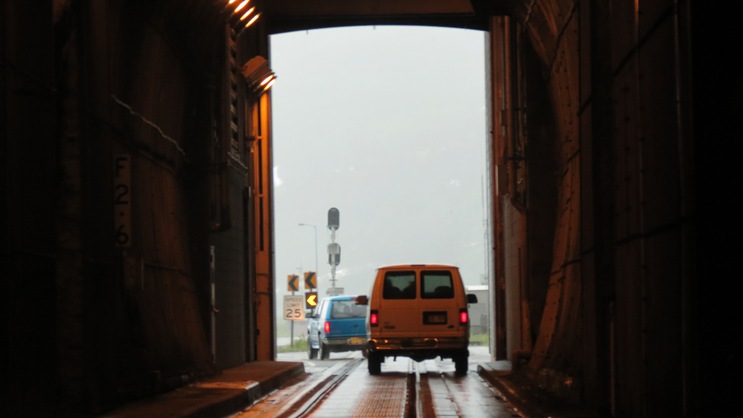 Whittier is at the end of Prince William Sound. It used to be an Army supply base but now it’s main purpose is fishing and tourism. You can also take the Alaska ferry from here to Valdez and I think Cordova. They also get the occasional cruise ship but not nearly as many as Seward, farther down the coast.

It was pouring rain here. We got all suited up and headed out to walk along the waterfront. I put the camera in a large ziploc bag. I could shoot through the open end while still protecting the camera from most of the rain. The wind was bowing hard enough that if I shot into the wind the lens would always get wet. I had to crop a lot of the pictures because the edge of the baggie would sometimes creep into view. See below right. 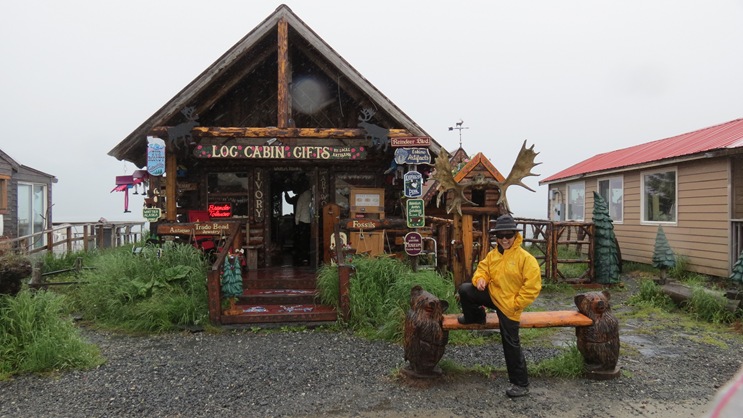 The harbour and parking lots are just filled with boats. 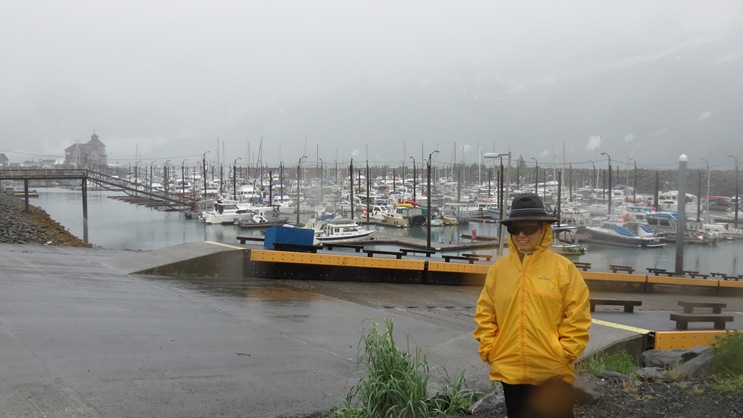 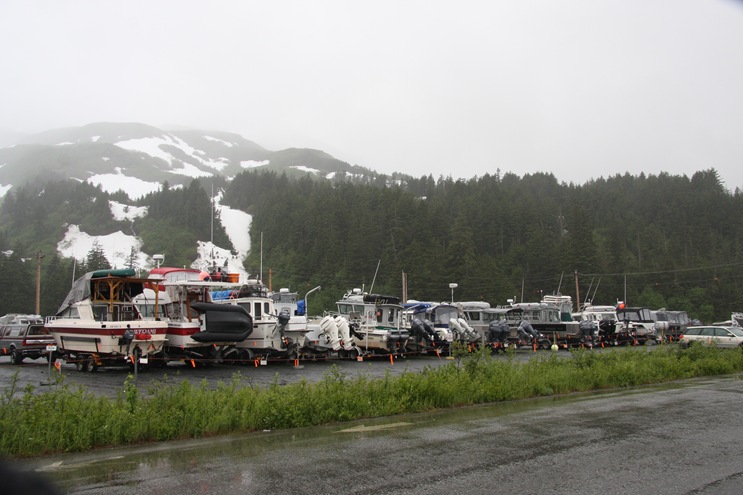 For visitors it seems that the things to do are to look at gift shops, take a glacier cruise or fishing charter or go kayaking. One of the cruises advertises that it goes to 26 glaciers. Again we have a 2 for 1 coupon but have heard that the trips from Seward are better.

There are a lot of places that will rent kayaks and take you you on guided trips down the coast. If you have your own they will even drop you off in one of the bays if you want to explore on your own. These guys just got back and looked pretty cold. 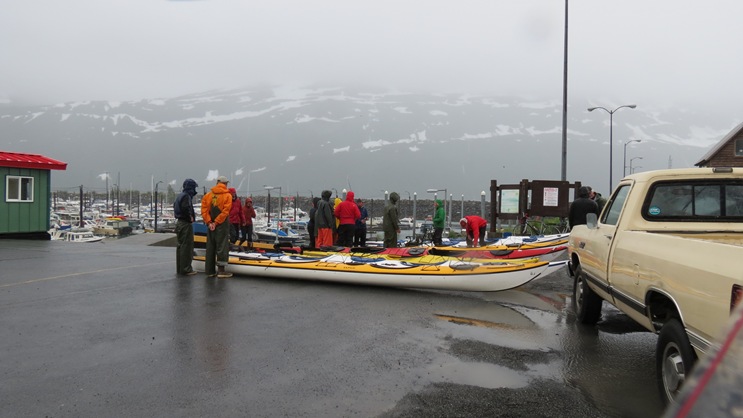 One somewhat weird thing about Whittier is there don’t seem to be any private homes. Just about anyone that stays in town lives in one condo building. I guess it is cheaper to just heat one big building. 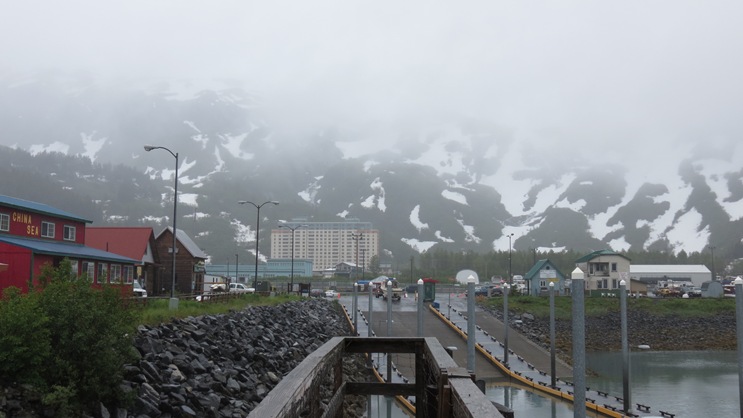 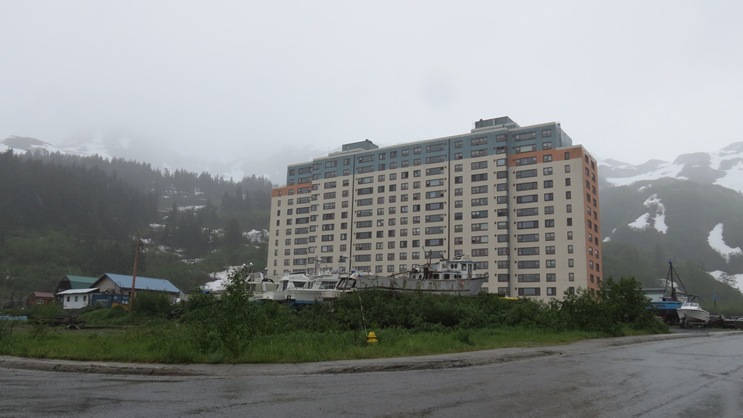 When it was an army base everyone stayed in one massive building farther up the hill. Obviously it is now abandoned. 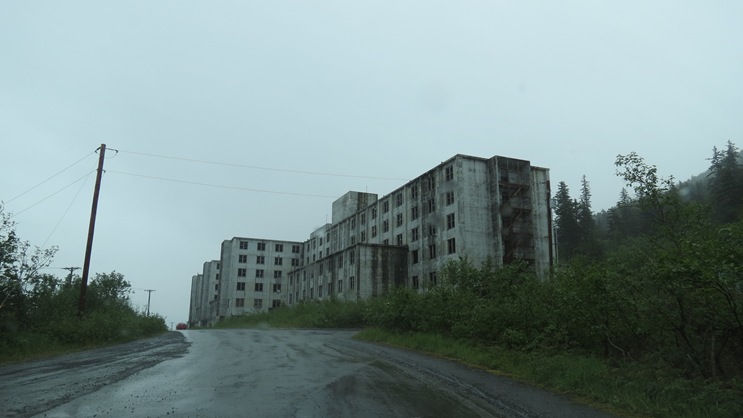 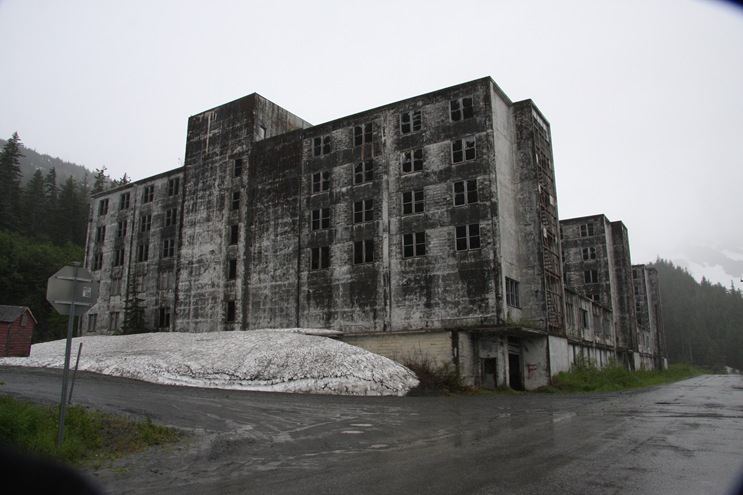 There are no fences or anything to stop you from going in or climbing the stairs. It looks like a lot of people do. 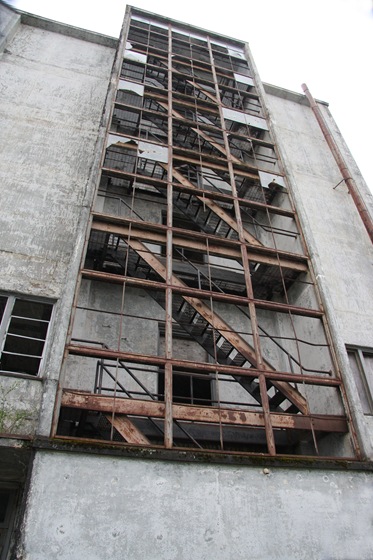 It did not look to be a very safe place to explore as a lot of the concrete was very cracked. 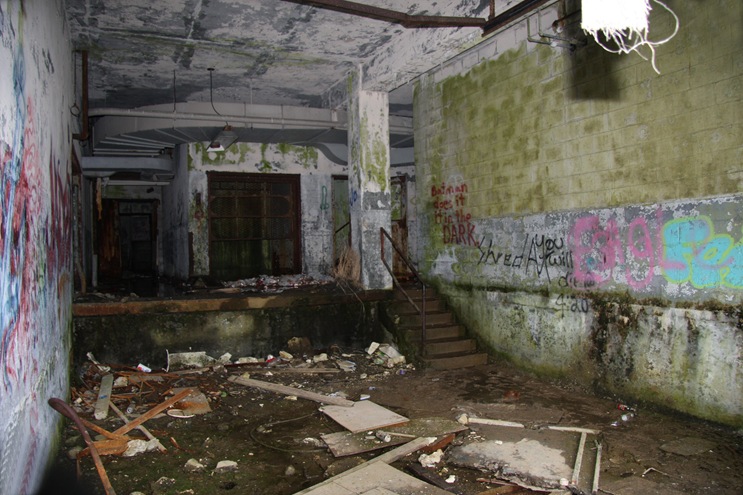 At the time it was the largest building in Alaska and was called a “city in a building”. It had a store, theater, hospital and their offices. People never really had to go outside which was probably the point in the winter.

We drove a road that went up the coast a bit. We didn’t go to the end because it deteriorated a bit but it sure looked like they put a lot of work into the first part. They blasted out this cliff which today has a lot of nice little waterfalls. You can see the size by looking for the RV down at the far end. 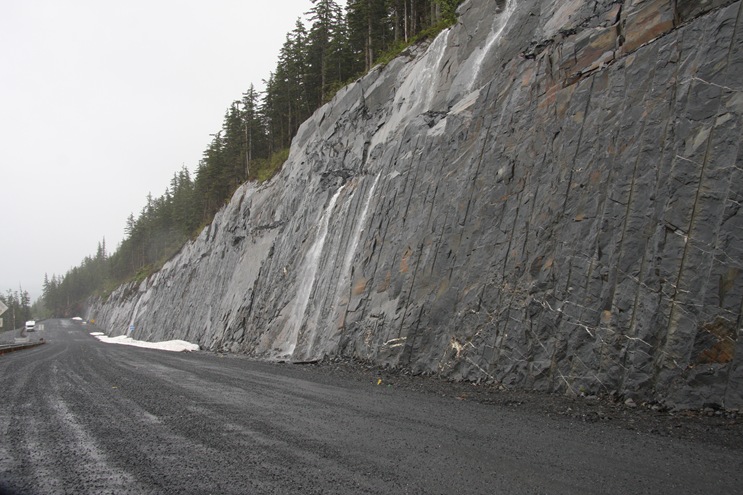 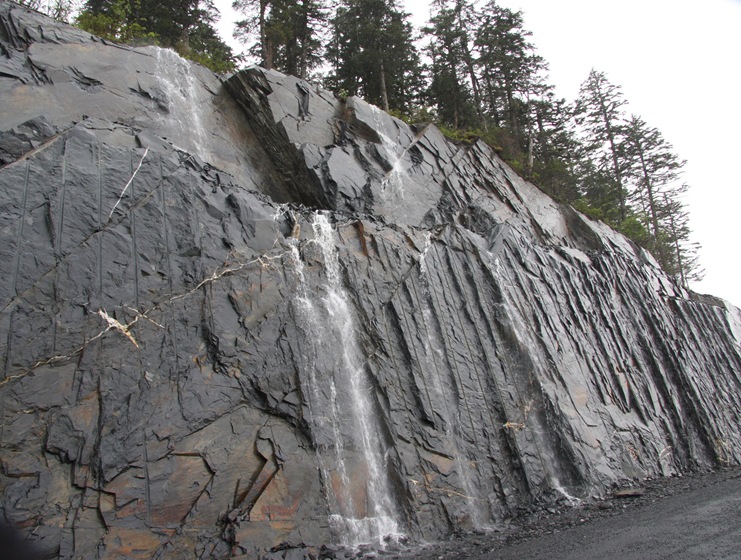 The view back to Whittier. I guess this is normal weather because one guys said “If its not raining, Its not Whittier”. It would get kind of depressing. 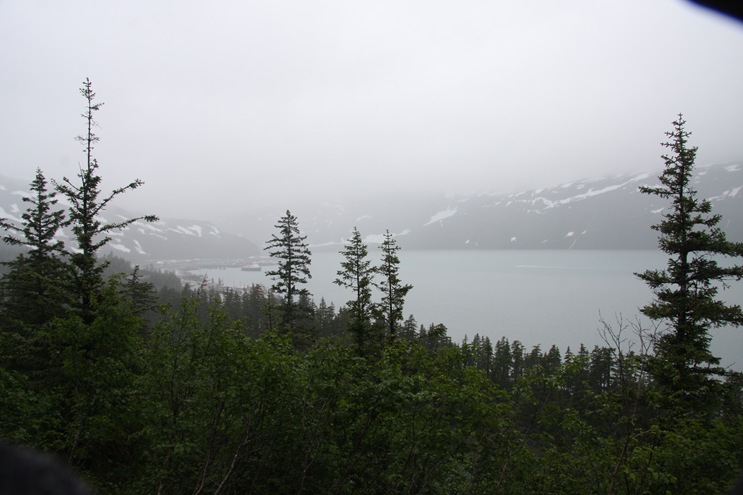 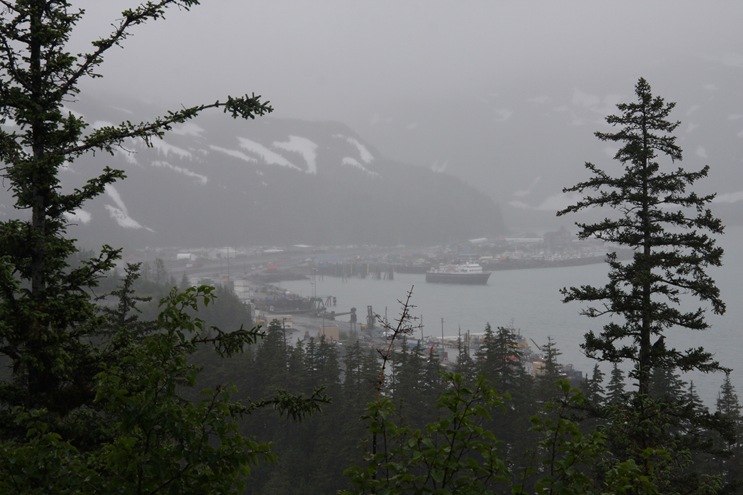 The road also had brand new guardrails and a bike path with a couple of miles of the shiny pipe railing you can see in the picture below. 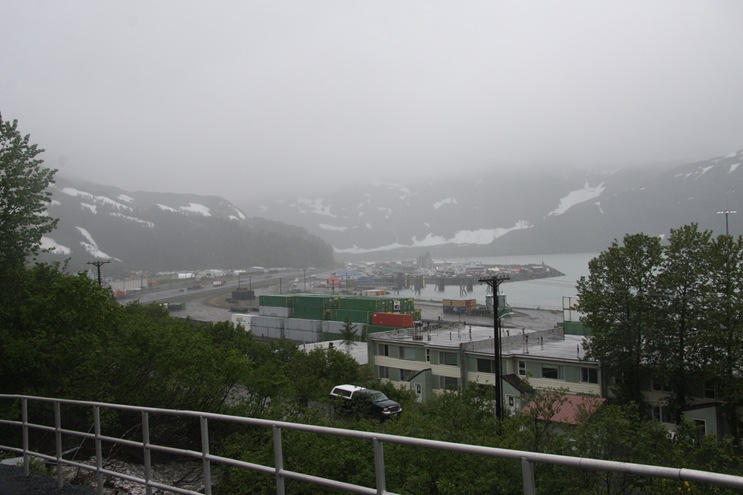 It must have been a lot of money for a road that none of the maps said went anywhere.

By this time we had only been here about 3 hours but that was enough. Back we go to wait our turn at the tunnel. For some reason it is not very busy today. 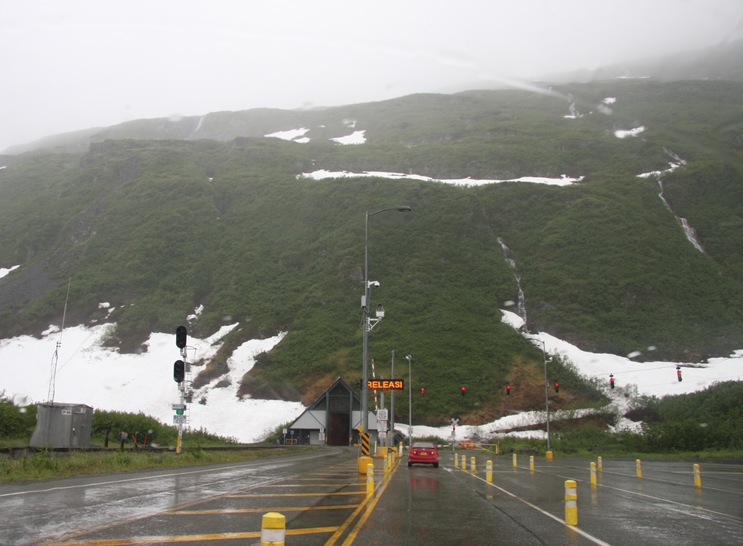 The status sign through the windshield as we waited. 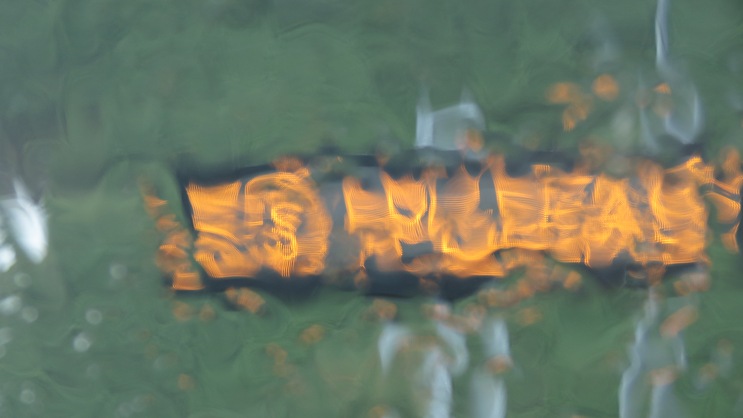 We are now back at our nice warm and dry RV and the rains seems to have gotten stronger. Tomorrow we exit stage left and head a bit more to the west.