We awoke to a mostly sunny day. It looked like a good day for a hike but we decided to take it a bit easier today and just go to the Alaska SeaLife Center. It is just a short walk from the campground in town. 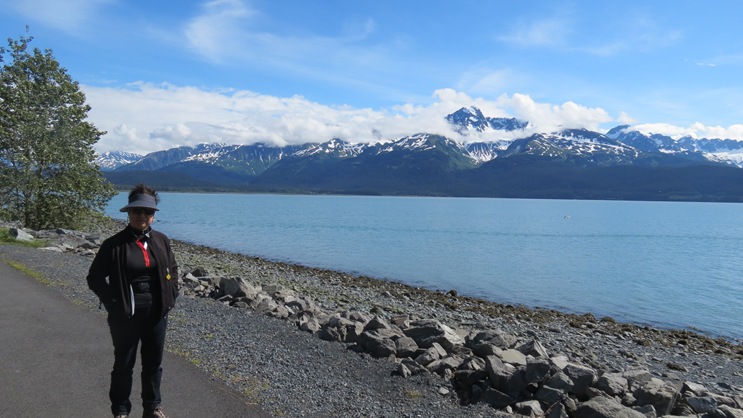 I don’t think they get a lot of days like this. Yesterday, on the cruise, the guide described a patch of sunny sky as a “cloud cover malfunction”.

We had another 2 for 1 coupon so another $20 saved. This place is pretty typical for an aquarium but we did manage to spend about 4 hours here.

Lots of tanks of sea stars and various crustaceans. 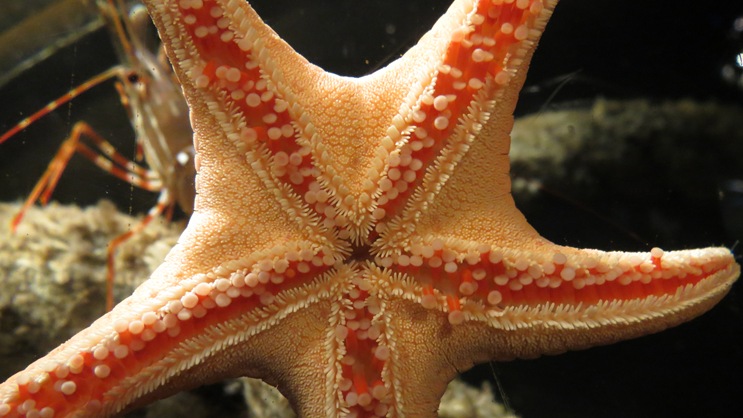 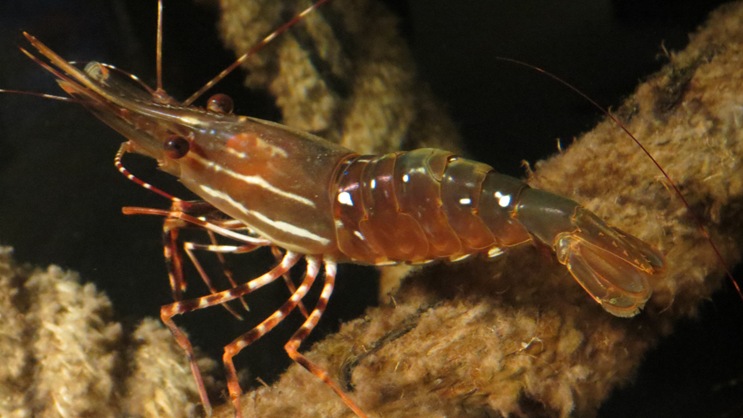 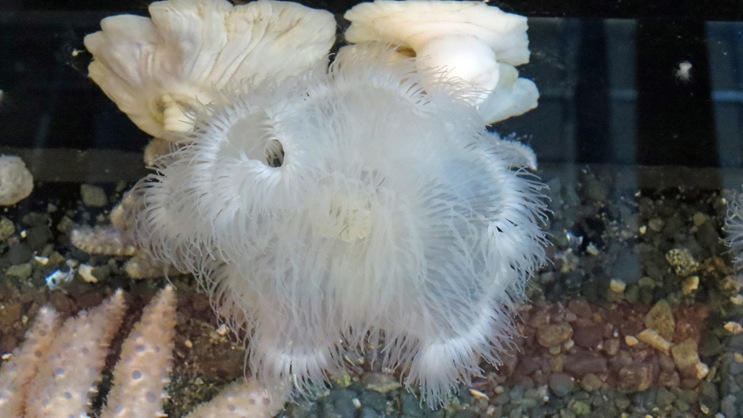 This one interesting creature was all curled up. 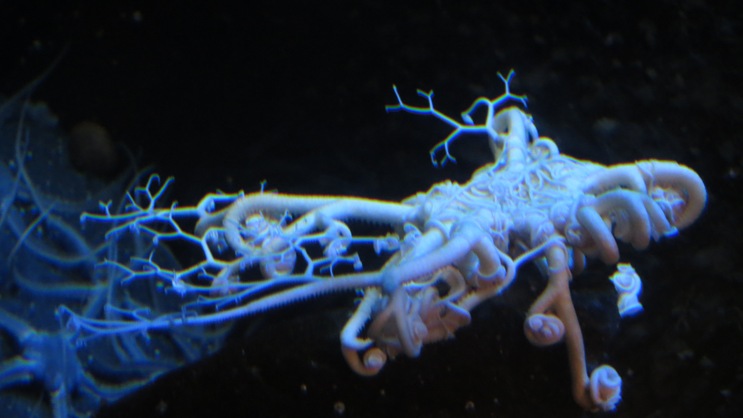 When we went by later it had opened up a lot. 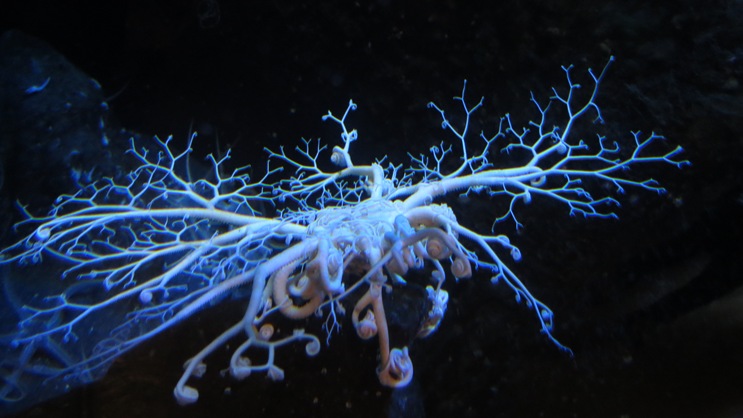 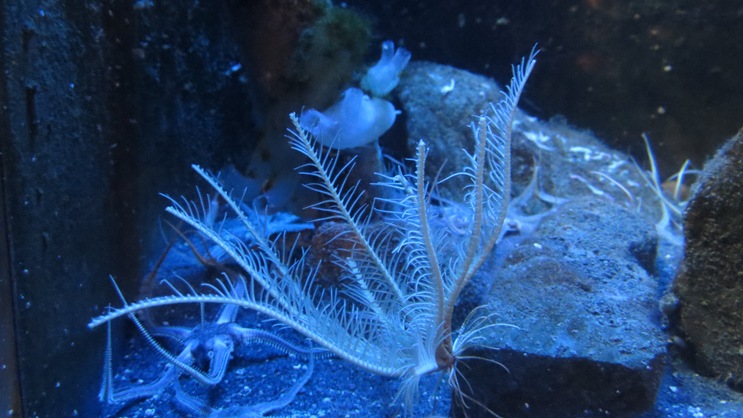 You have to have touch tanks. 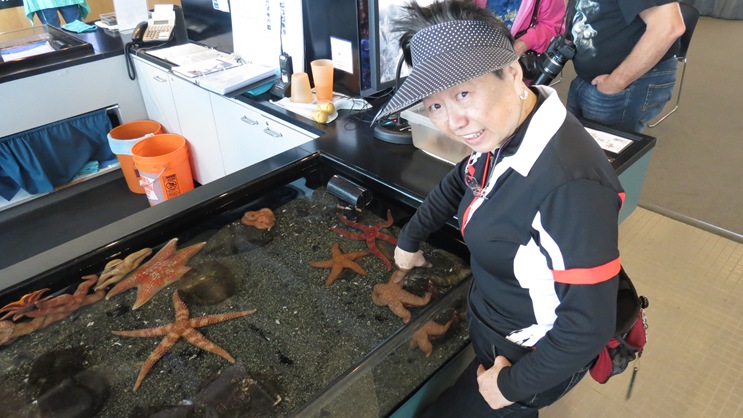 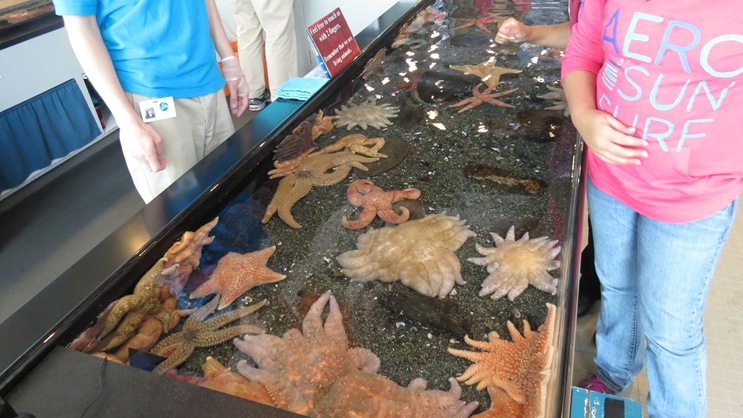 I didn’t know that this 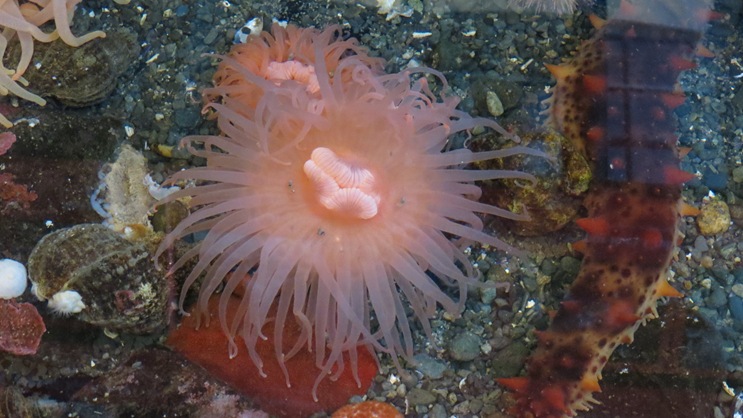 can quickly turn into this when it wants to hide. 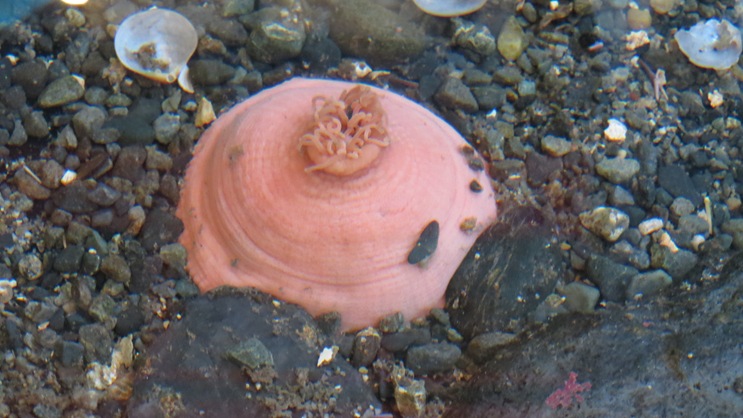 Since they are almost complete water they just squeeze all the water out to compress themselves. They also don’t have any muscles in the arms. They just vary the water pressure in them so they swing around.

A close up of some tiny barnacle fans that are about 1/8 inches long. 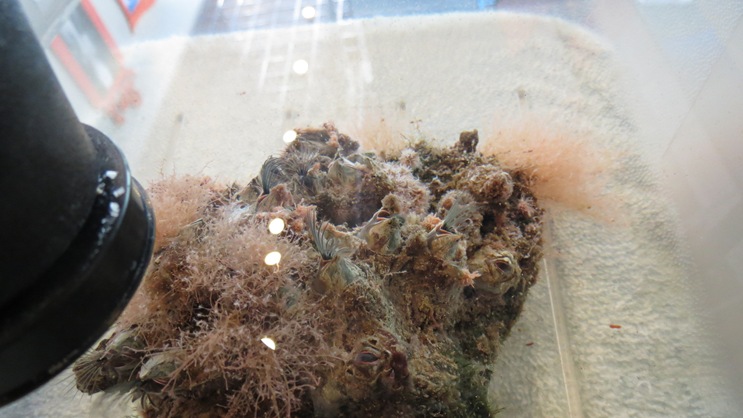 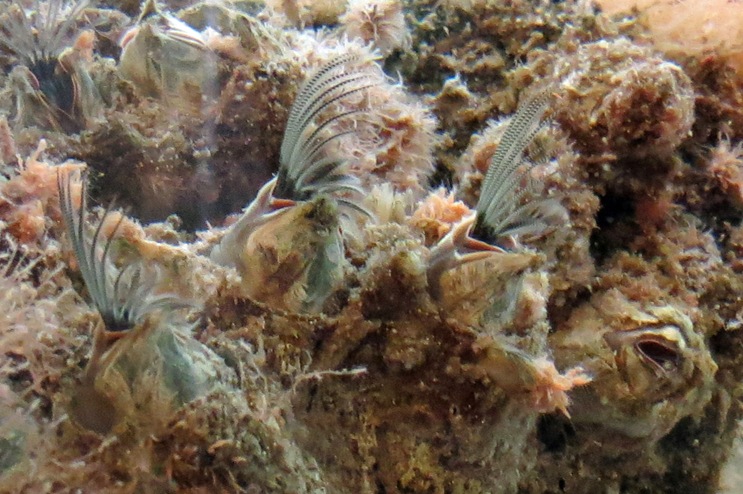 There was a seabird room. 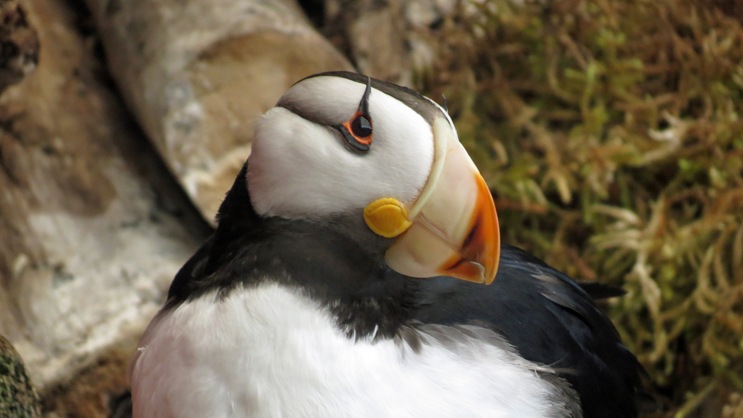 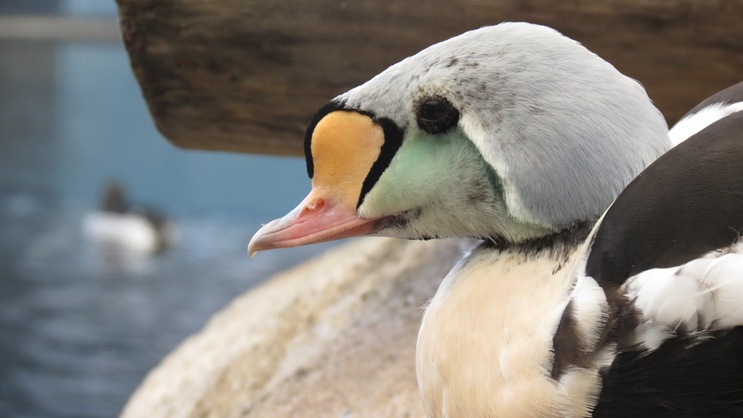 Jennie was swimming with the fishes (young salmon). 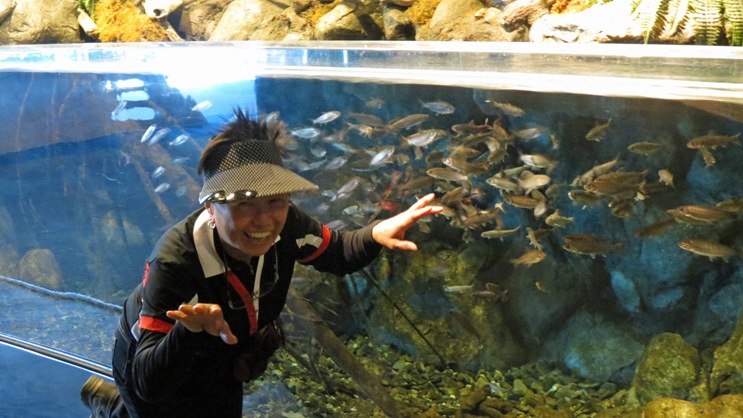 We started getting hungry and the small cafe they had didn’t have much so we went outside and found a place just up the street for some fish and chips. This is kind of gross but when we came back I went to the restroom. At first I thought someone was playing a tuba in there. I had a hard time not laughing out loud. (and now back to our regularly scheduled program)

Downstairs they had all the large windows into the tanks. They had chairs in front of each one so you could just sit and stare, which we did for a long time. This tank had the seabirds above it so we watched the puffins dive down and seem to fly underwater. They were too fast for a picture. 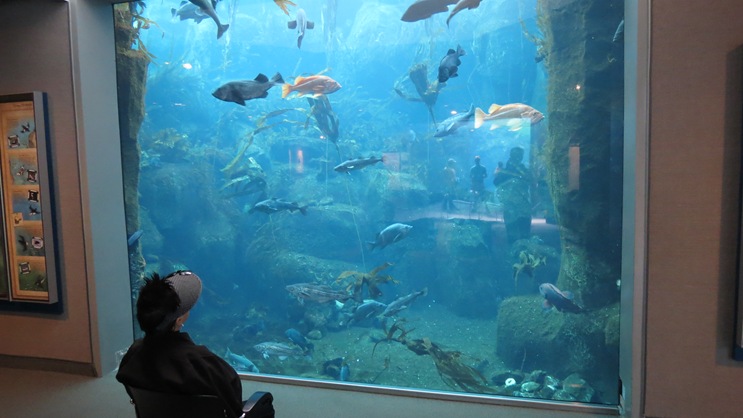 The seal loved to follow the ball in the guys hand around the window. 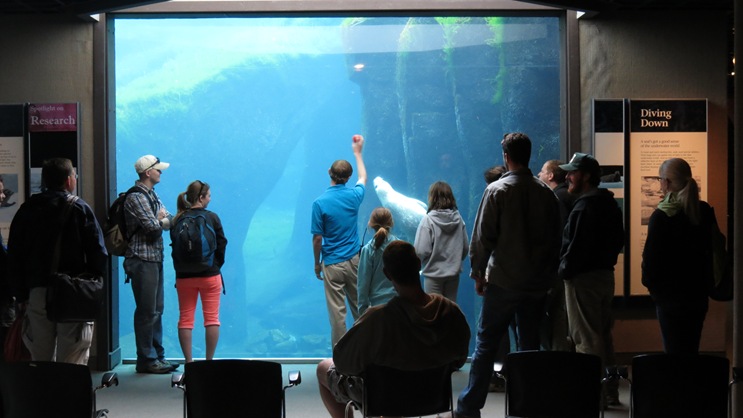 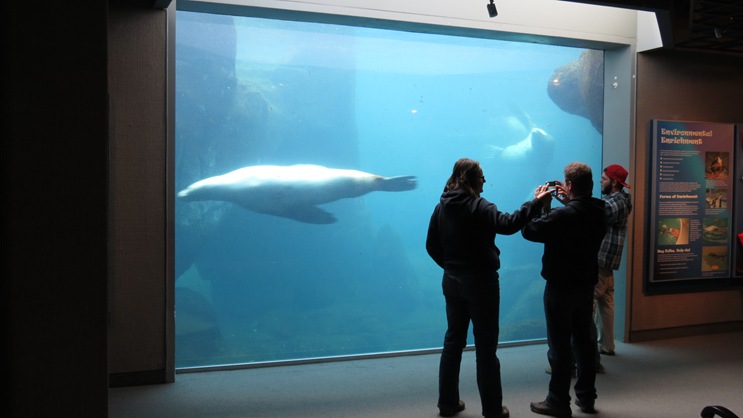 At one point I looked up and saw a Cisco WIFI router. There was probably a lot of my code in that box. I had brought our iPod touch and sure enough the network was open so I caught up on our emails. 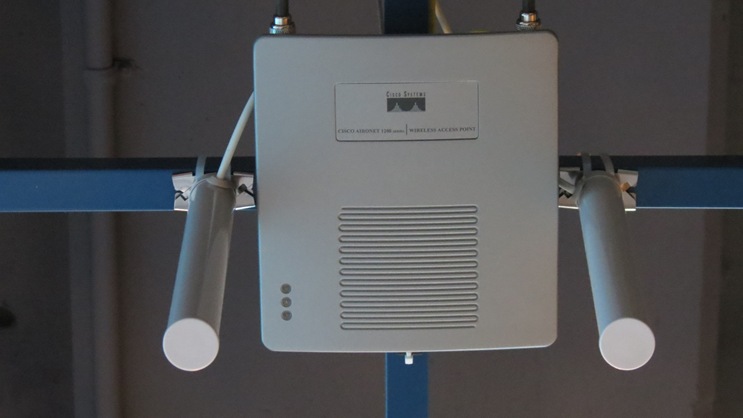 As we walked home we noticed that it looked very dark in the west. We picked up the pace a bit and made it back to the RV with 5 minutes to spare before the rain hit and it hasn’t really let up since.

It was a very relaxing day staring at the fishes.