Not much happened yesterday that was worth doing a separate post.

I had originally planned to drive right to Seward from Homer but I read about a campground at one of the lodges run by Princess Cruises. It wasn’t that expensive and you could use all the facilities of the lodge, including the hot tub. We had also been without any hookups for 10 days and full hookups meant not being worried about what was plugged in, having hot water all the time and having LONG showers. I called them on Wednesday and they had one site left. Sold. 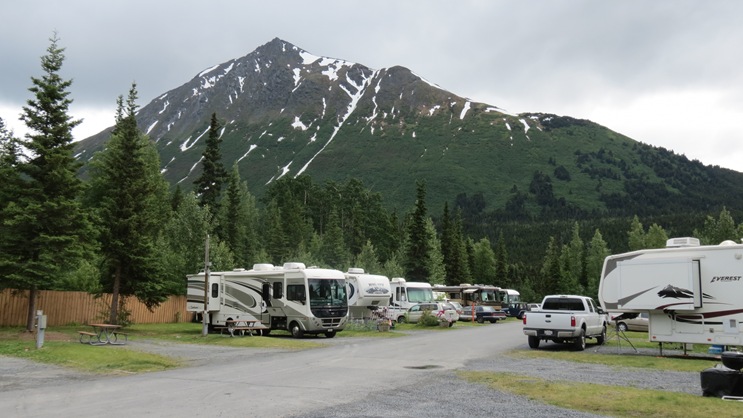 Along the way we had stooped at the Fred Meyer in Soldotna to restock our food supply so we got here at about 1. After setting up we got our suits and headed up to check out the lodge and use the tub. It is just up a set of stairs from the RV park. 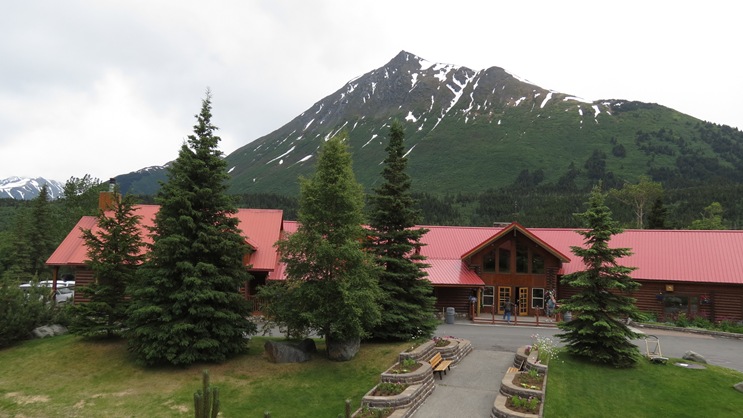 The rooms are in separate buildings where each room is offset and looks like a small cabin. Very nice. I have no idea what the room rate is. 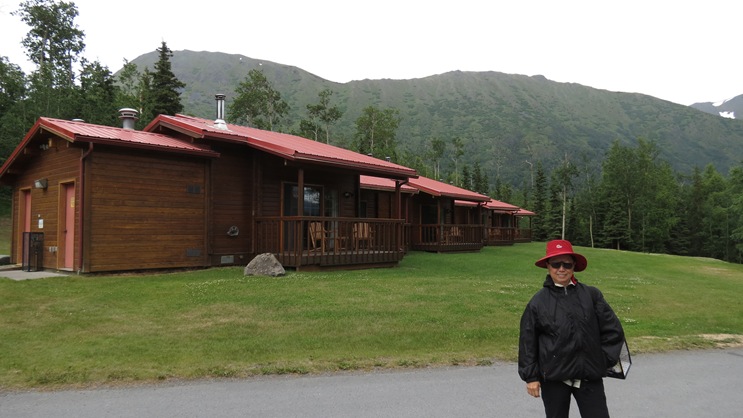 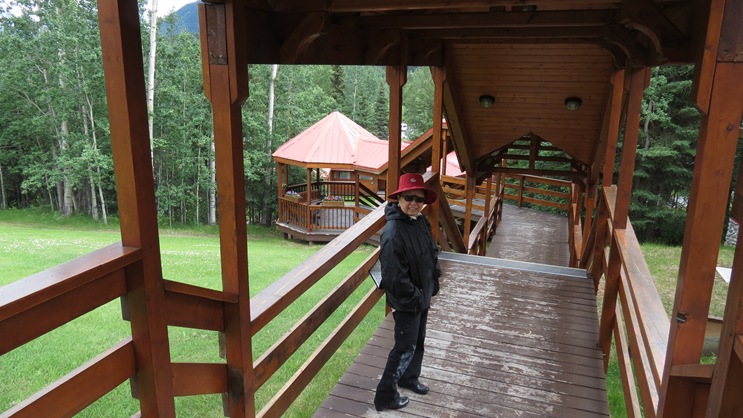 It was a bad sign when we got to the tub. There was one hotel guy staring into it and another in it with a swim mask on, working on it. It was closed and they said it “might” be fixed tonight.

We just went back to the lodge and walked a short trail down to the Kenai River. 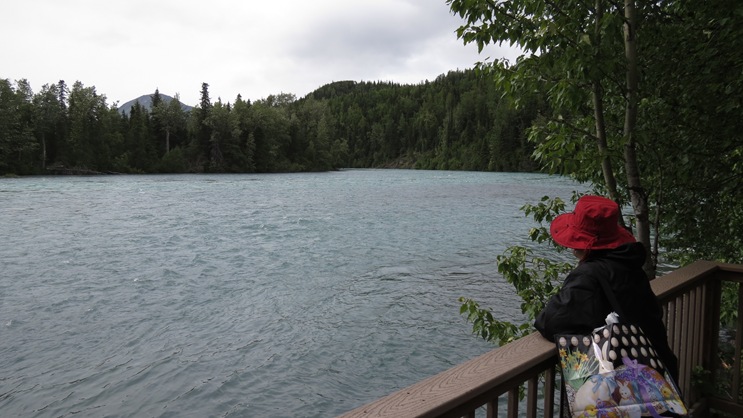 I had read about some nice hiking trails in the area. The lady at the desk said they were full tomorrow but would mark me down if someone cancelled. Later in the evening she knocked on our door and that there was a cancellation and it even for our site so we don’t have to move.

Last night, the forecast for today was pretty depressing, 60% chance of rain and kind of cold. When we got up it was a mix of sun and cloud with the temperature in the low teens. Good hiking weather.

The hike I had chosen was called Skilak Outlook Trail. Skilak Lake is the second largest lake on the Kenai Peninsula and the hike is 4 km in and an 800 foot climb to the top of a hill with great views of the surrounding countryside.

There were bear warning signs at the trailhead so out came the bear bells and the bear spray holster was out on my belt. It had rained a bit last night so a bit of the early part was mucky. The bugs were also pretty bad around here. Even I put on some spray. 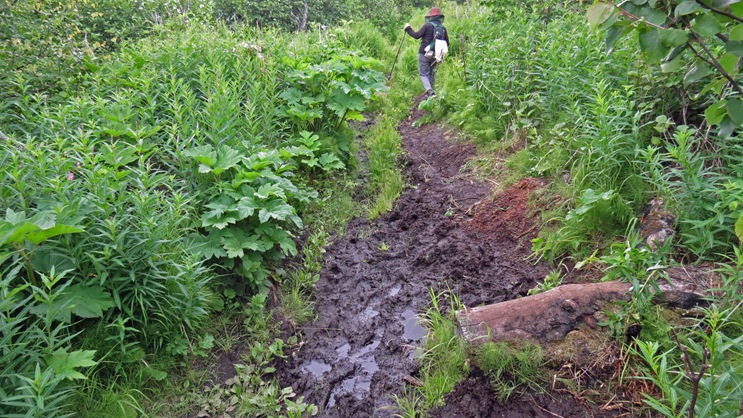 We mostly walked through a burned out forest. I think the fire happened in the early 80’s. 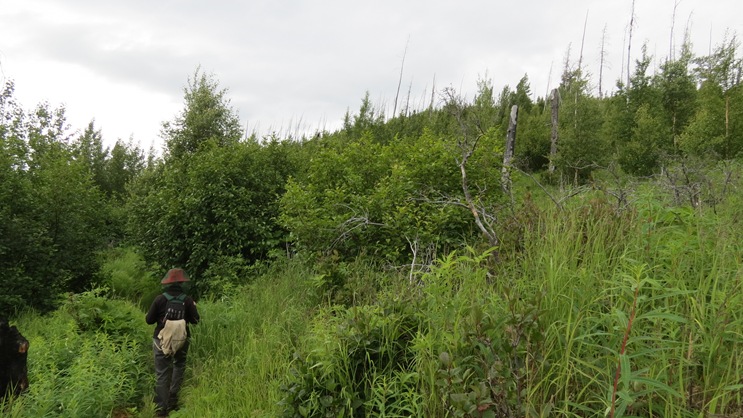 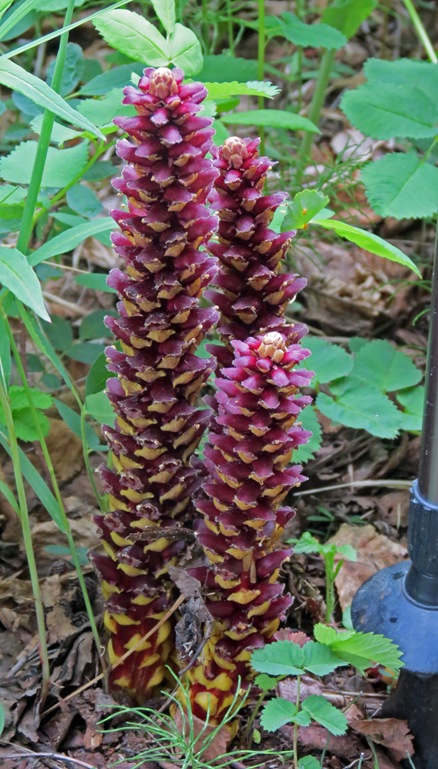 With most of the tall trees gone we pretty much always had a view of the lake as we worked our way around and up the hill. 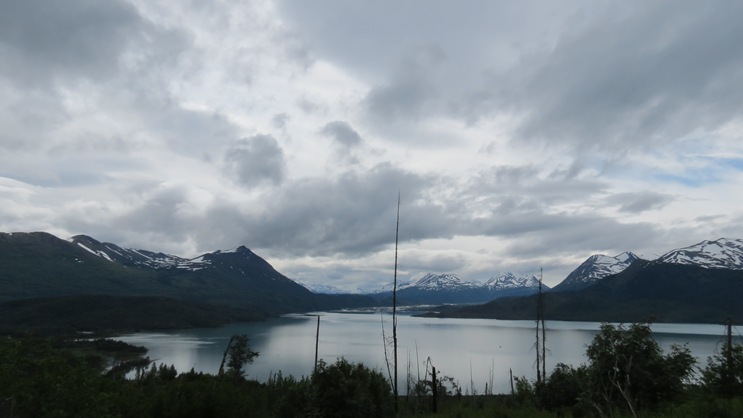 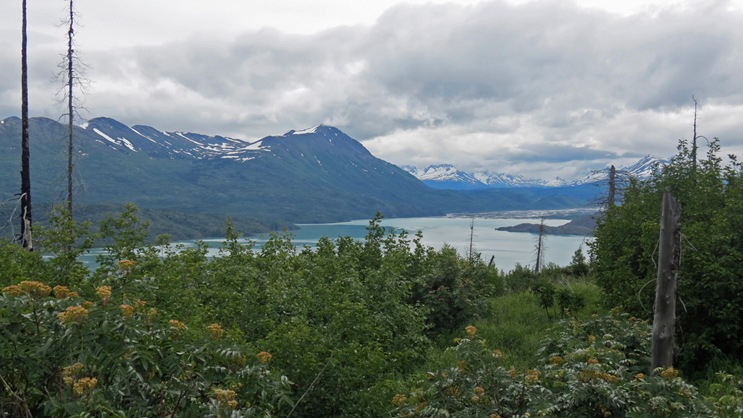 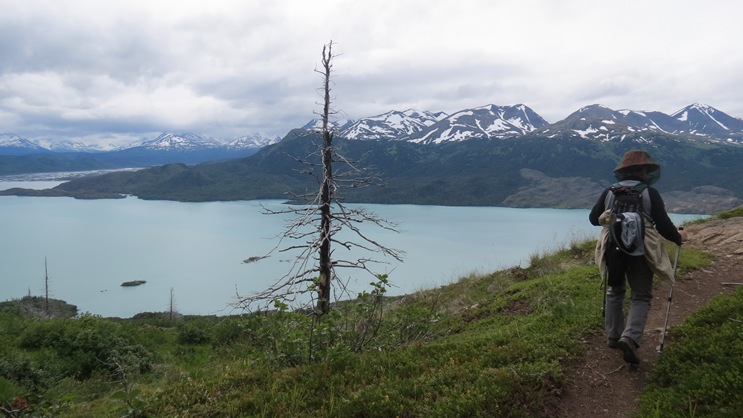 The trail was quite good, with a slow steady climb. Only at the end did it get steep at all. The vegetation was taller than Jennie in some places. 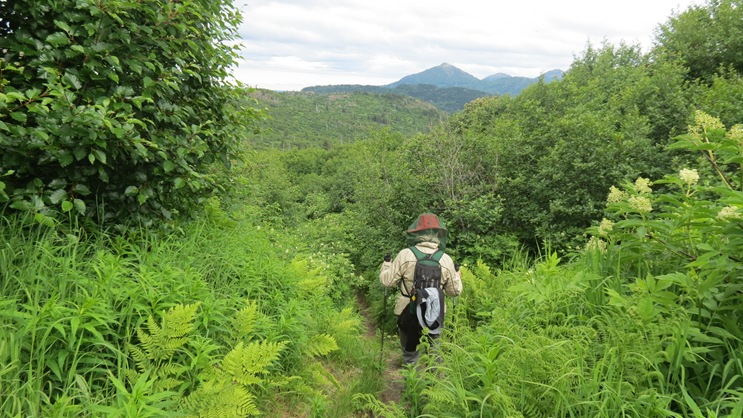 Up at the top was a great place for lunch. The lake was a dark blue green colour from the glacial silt. 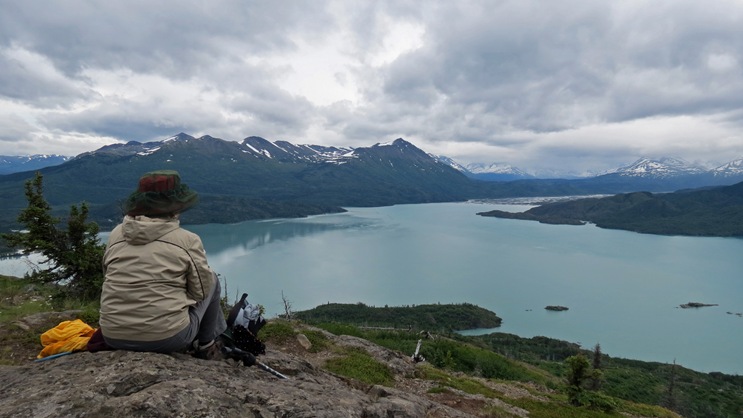 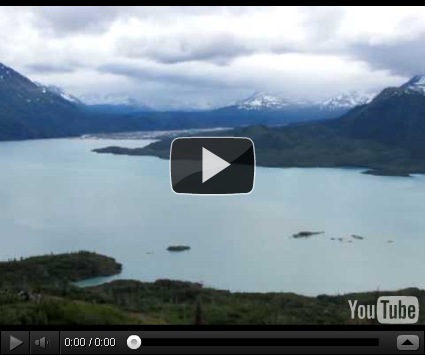 Down on the lake we saw a teeny tiny boat with some fishermen. 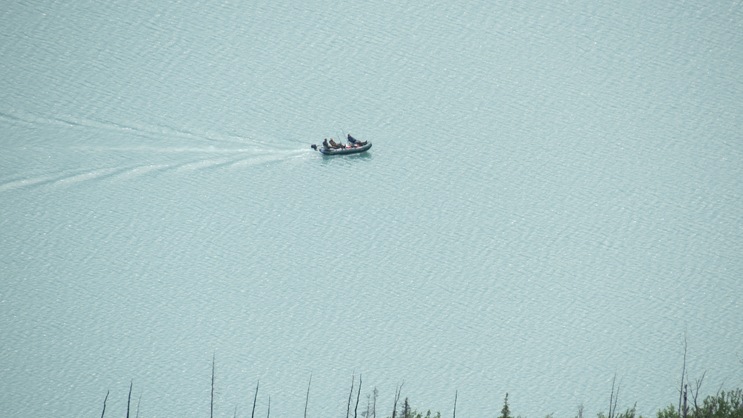 Behind us to the west, we could see the mountains on the other side of the Cook Inlet. 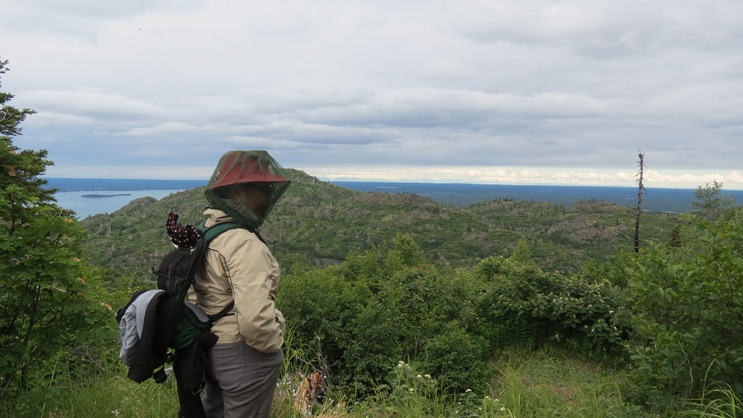 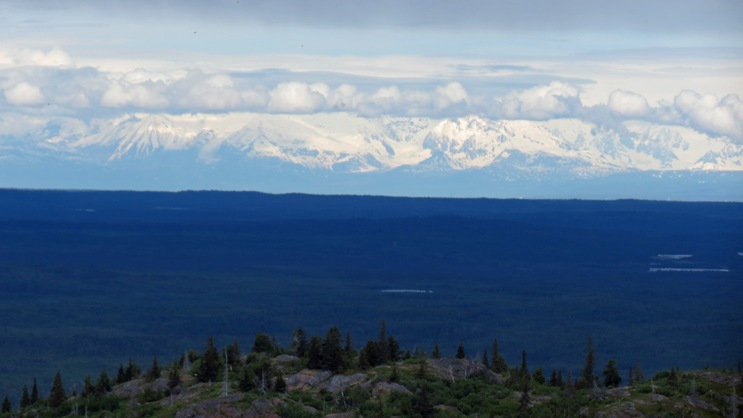 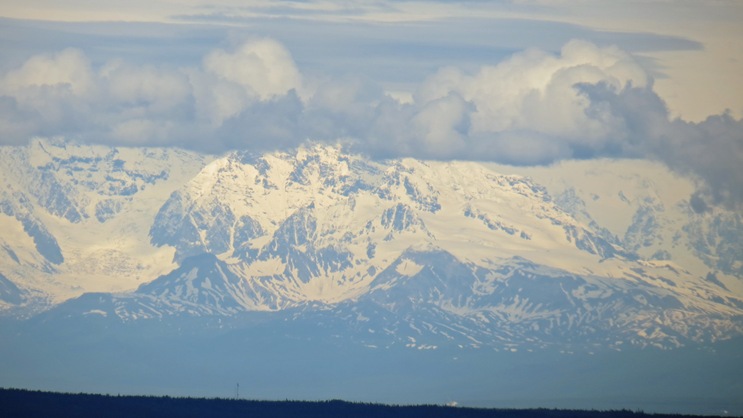 The mountains are about 120 km away with a vast flat forest of the western part of the peninsula in the foreground. We are almost in the center of the peninsula. East of us is all mountains and west is all forest. You can see it in the terrain map of our trip at the top of this post. When we first looked out we thought the forest was a huge lake because the haze made it look sort of blue green. 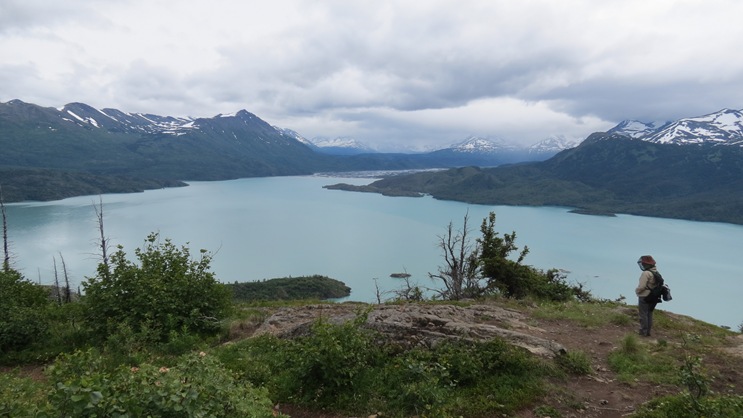 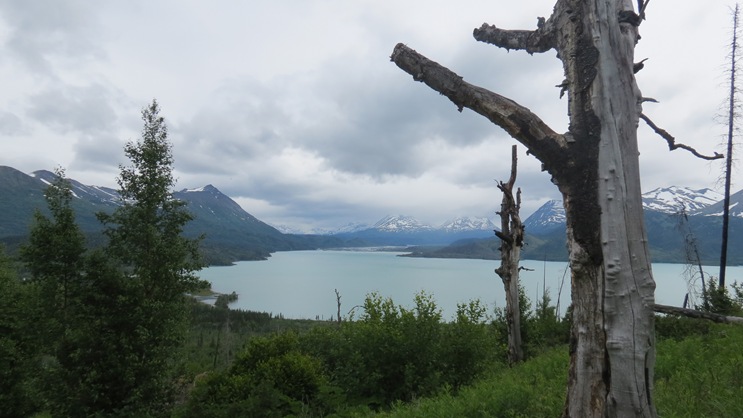 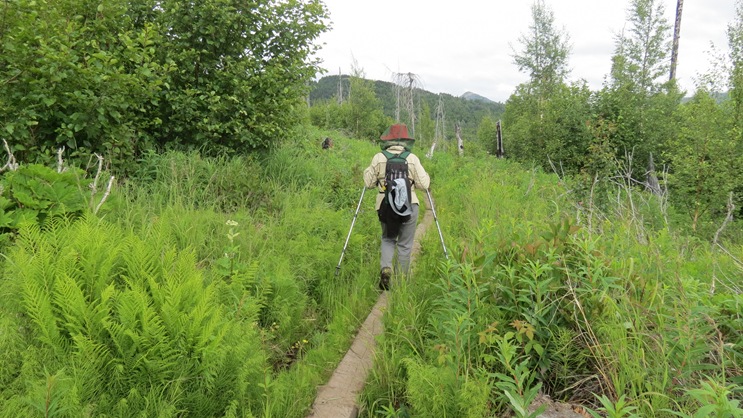 We / I had planned to do another short hike to a gorge on the Kenai River but when we got back to the car that was quickly scrapped.

Back at the RV park we asked at the office if the hot tub had been fixed. YESSS! Did it even feel good. After the 8 km hike and the hot water we just passed out for a nap.

Tomorrow on to Seward.