When I was planning this summer’s trip I made up a list of the places we wanted to go and at least some of the things not to miss at each place. There is no detailed plan and we seldom know where we will be or what we are going to be doing more than a day or two in the future.

Today was even worse. We woke up with no idea what to do today. I had been going to plan last night but was just too tired. We had originally been going to start heading out of Alaska but then I looked at the calendar and saw how much time we had left. I also remembered that I had wanted to do the other end of the Denali Highway but it would be a bit of a detour.

There were also a few things we saw near Chitina on the way to the mine yesterday so we took the easy way out and paid to stay here another night.

After being full for the last 2 nights, everyone else has abandoned ship. Even as I write this there is only one other trailer. 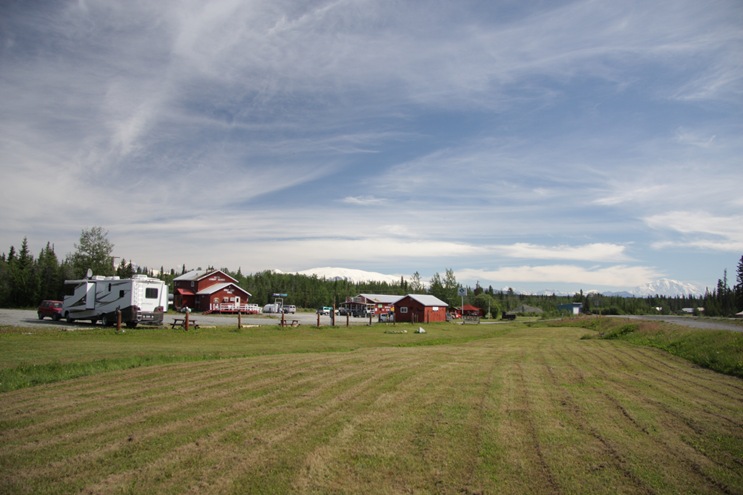 After lunch we headed back down the Edgerton Highway. We couldn’t resist another stop at the viewpoint. A few more clouds today but no complaints. 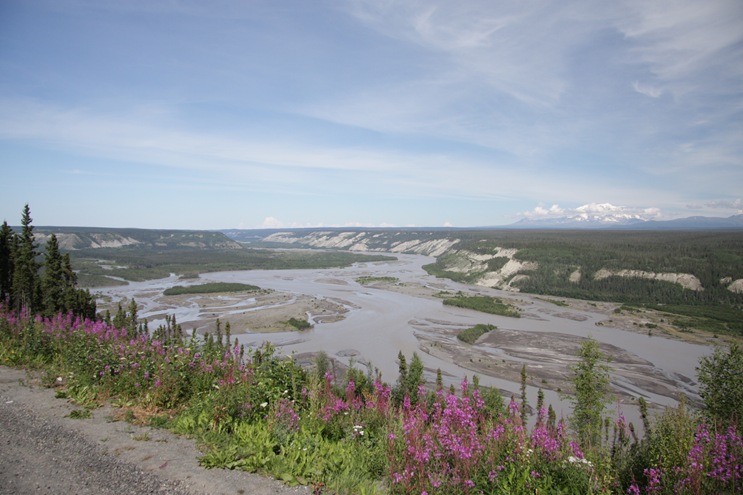 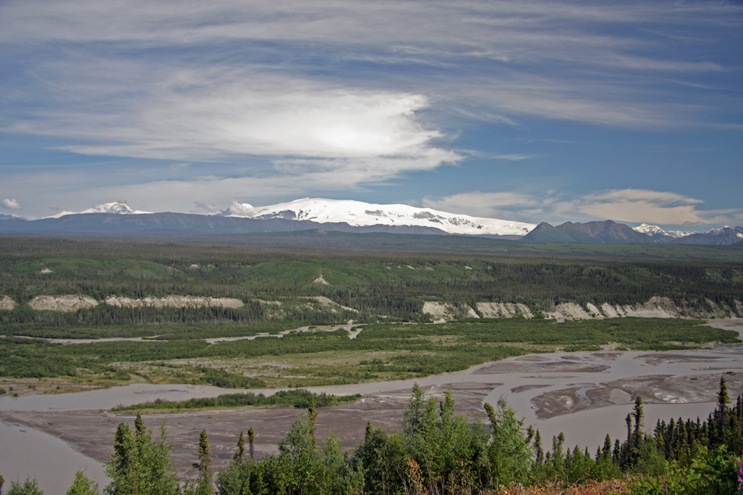 The very tip of Mount Wrangell. 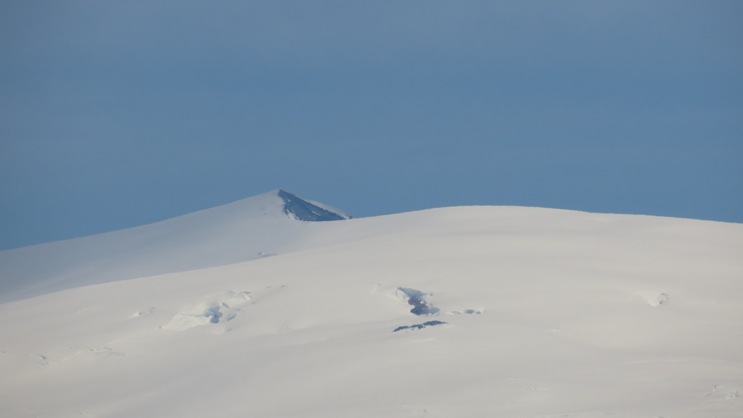 Next we stopped at Liberty Falls State Recreation Area. The falls were very nice but unfortunately the sun was directly over the them making for some lousy picture. 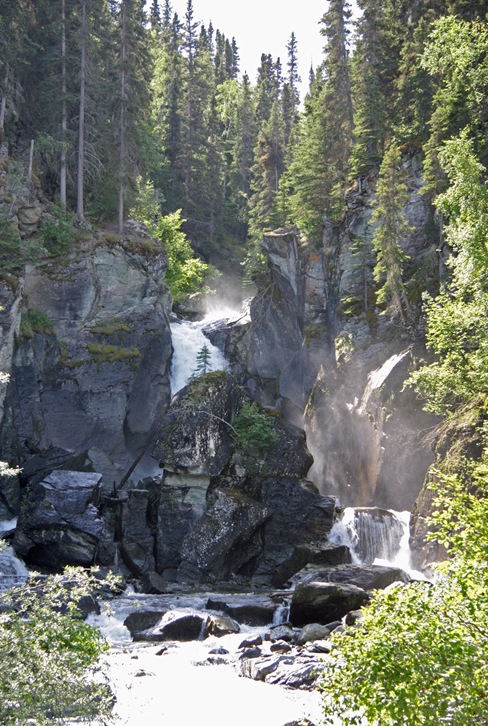 We scrambled over some rocks to get a bit closer. 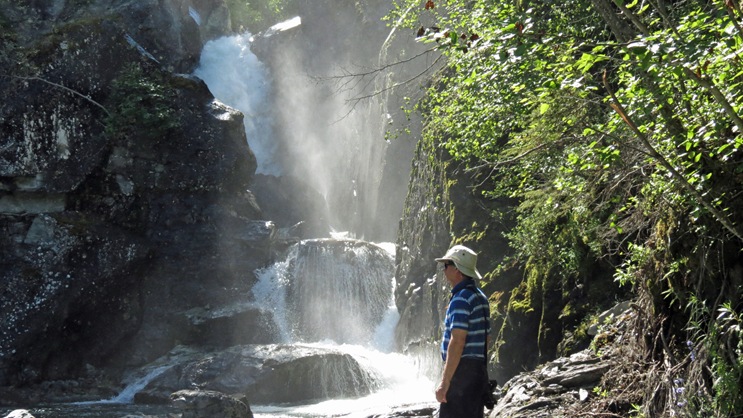 Jennie said she saw some blue specs in the rocks that weren’t there with her sun glasses off. I couldn’t see them even with my polarized sunglasses so she took her glasses off and stuck them in front of the camera lens and sure enough… 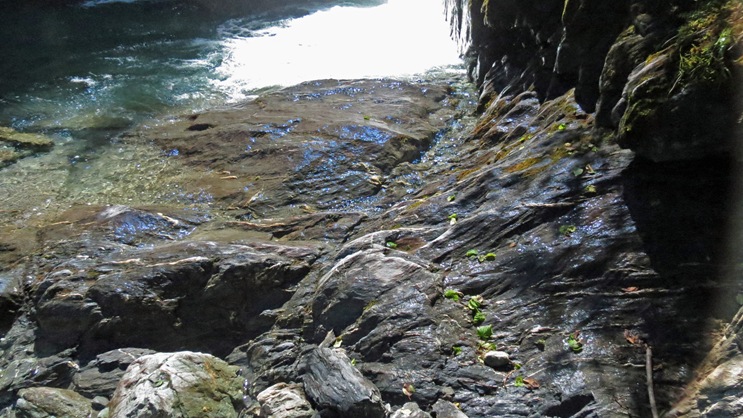 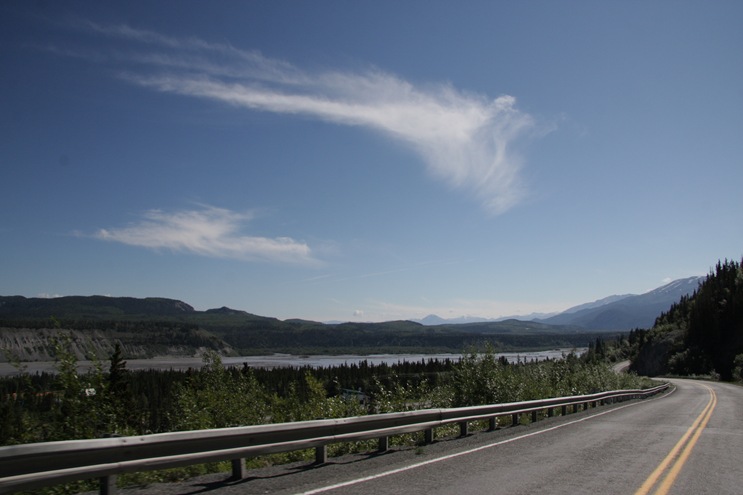 Just after Chitina is the joining of the Copper and Chitina Rivers in this huge delta. 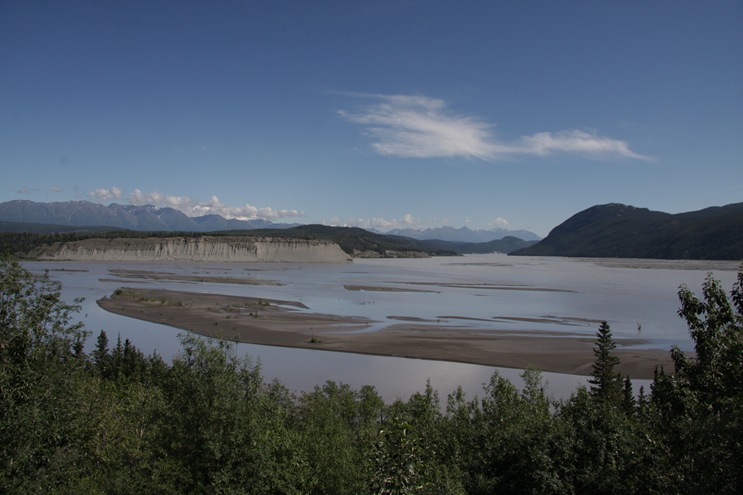 Back to the start of the McCarthy road again through this narrow gap. 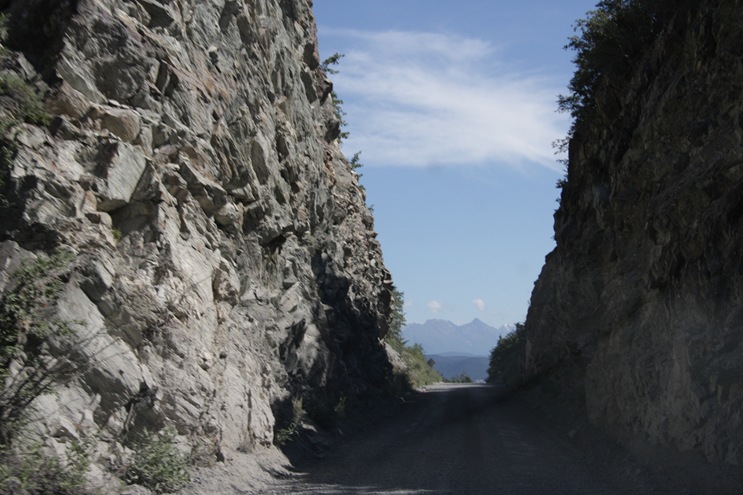 We went down near the bridge over the Copper River. 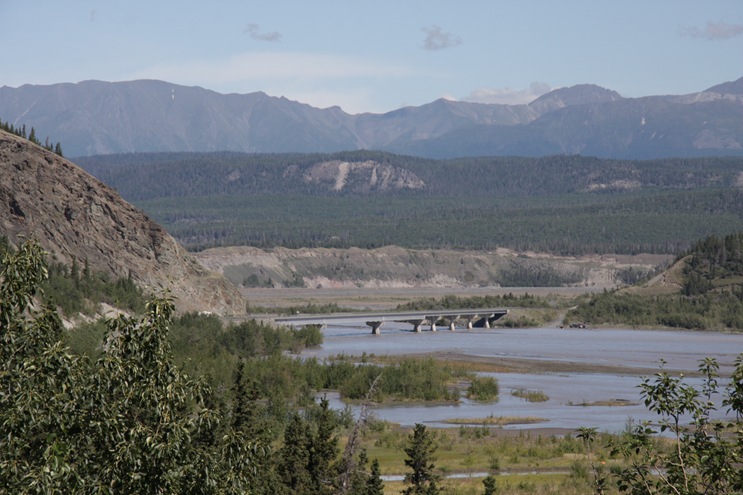 Along the river flats are a long line of fish wheels. We had been them yesterday but were too tired to check them out. 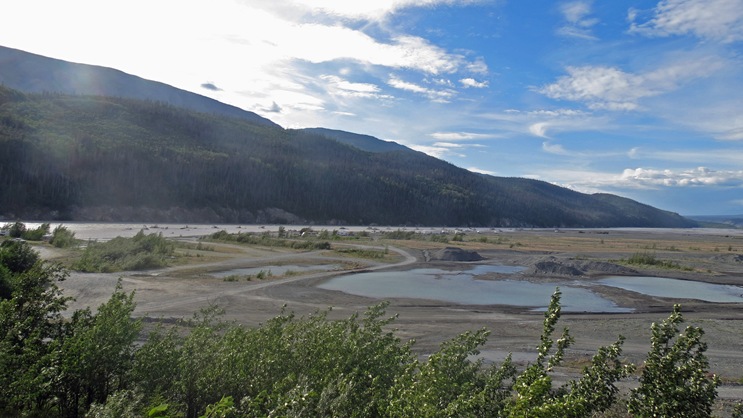 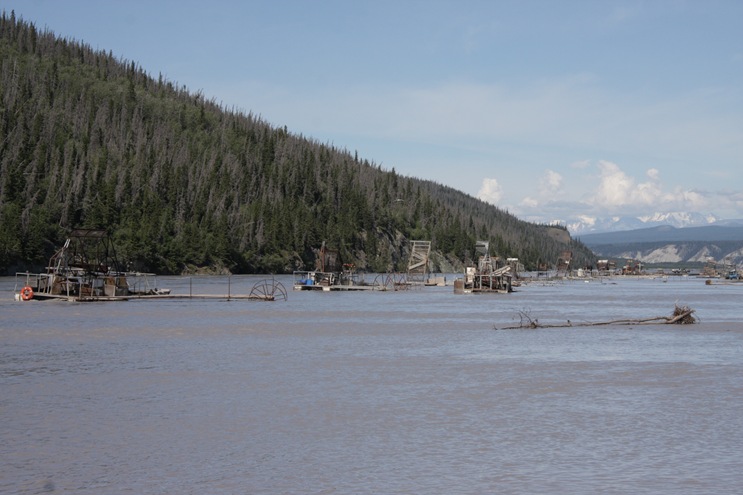 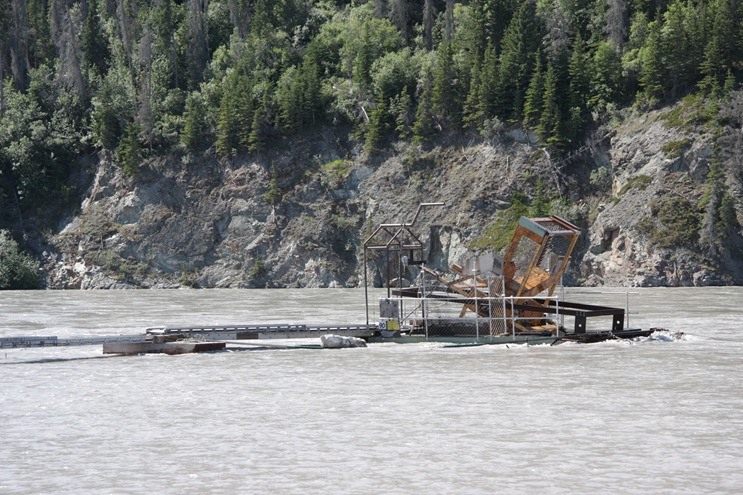 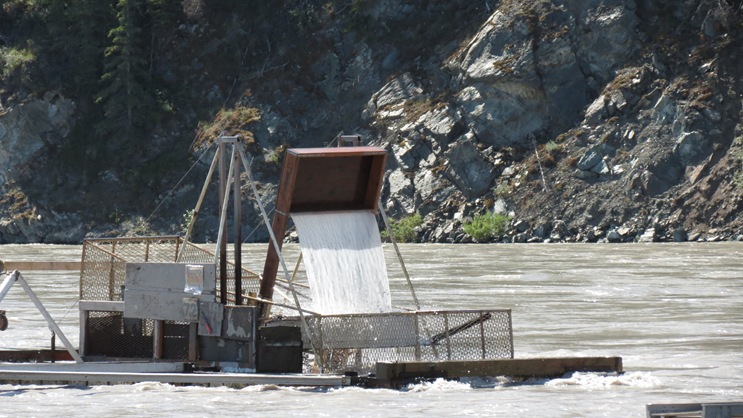 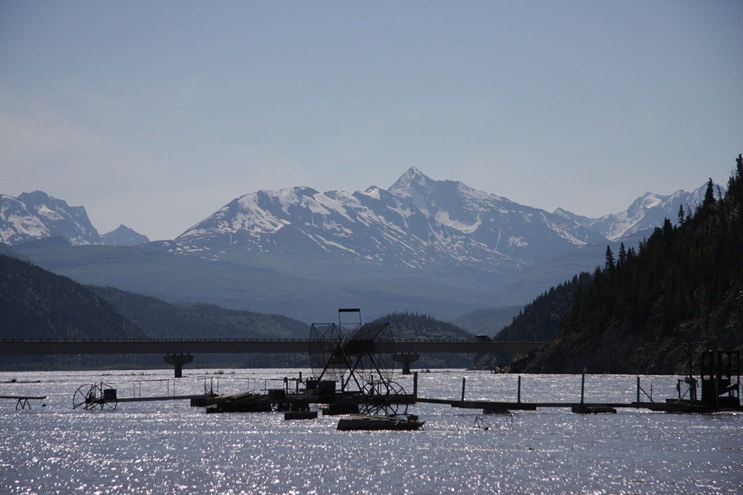 Only Alaskan natives are allowed to use a fish wheel. It uses the flowing water to turn a rotating set of two paddles and two nets. The nets have inclined ramps in them such that if a fish gets caught when the net is under water, once the net starts rising the fish will fall onto the ramp and slide into a bin on the side. An automatic fish catcher. 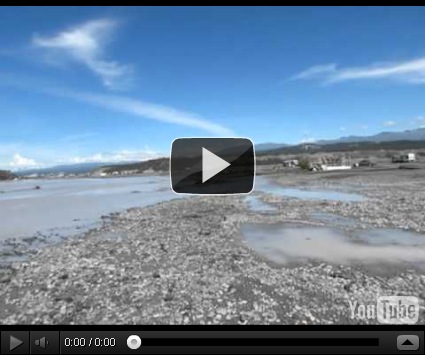 It must be prefect for them here. The river is flowing very fast to spin the wheels. There are a lot of salmon in the river and are very high quality. In the store Copper River salmon was $2 a pound more than those from Prince William Sound. There is also a steep drop off here. They anchor the wheels just after the drop and have short docks in to the shallows so that they can easily go out every once in a while and empty the fish from the bin. 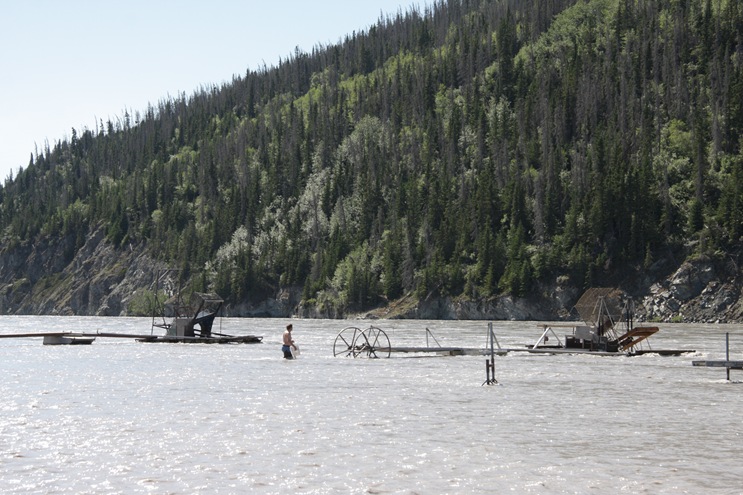 The fishermen park their RV’s here and stay a while. 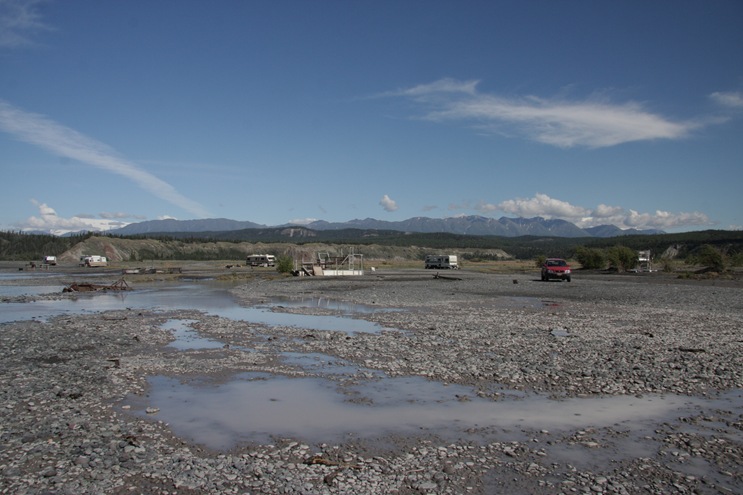 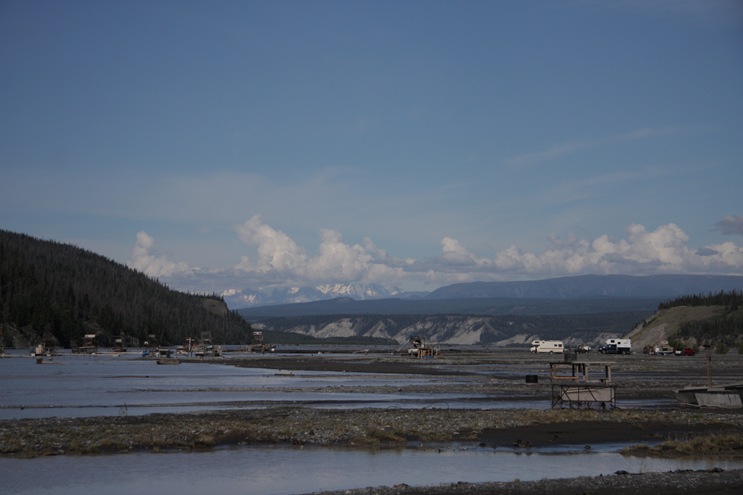 They all seem to be homemade as none were the same. 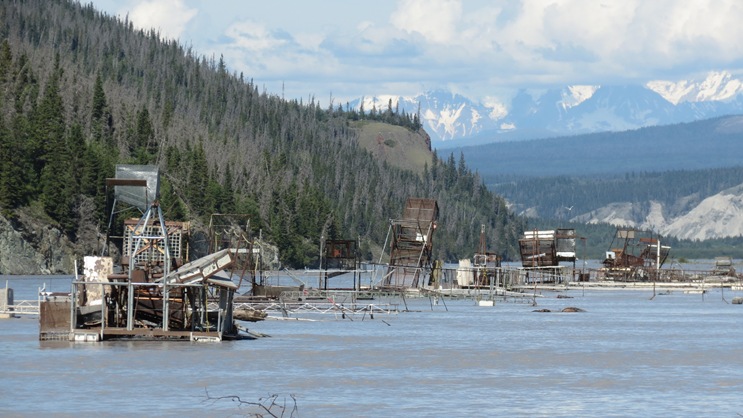 We also saw these people net fishing. They have very large nets on long poles. 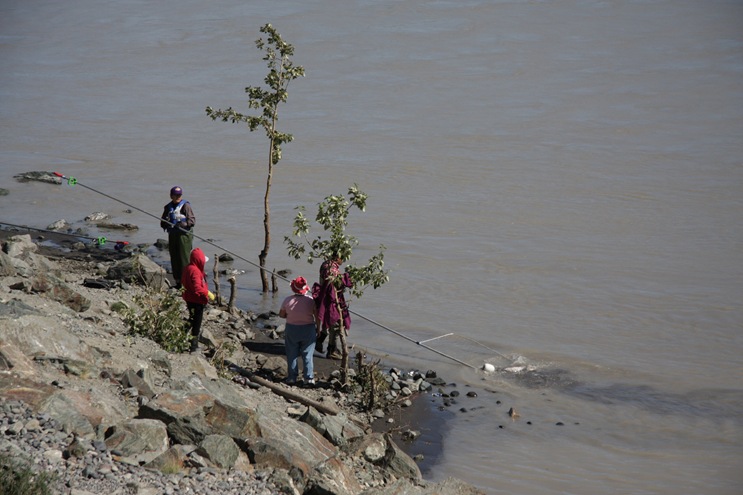 They walk into the river holding the net way out in the current. It looked like hard work. 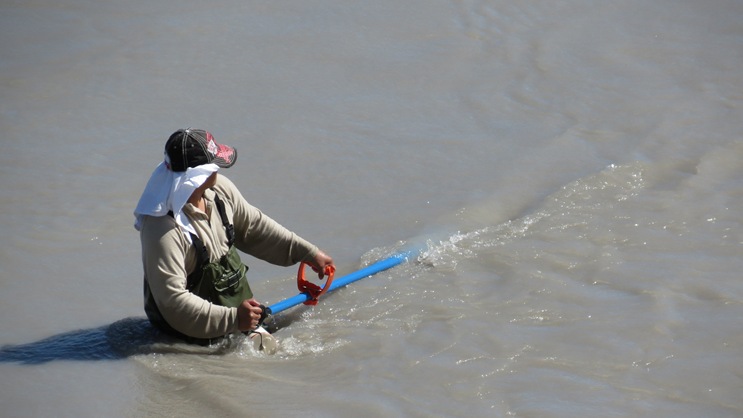 The current was so strong that they are pushed along the shoreline. Once they get down so far, they pull it in, move back upstream and try again. 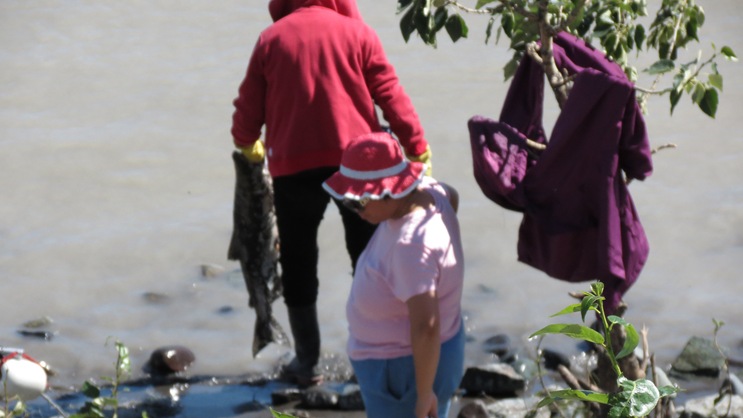 On the way back to the RV we had a mama black bear pop out in front of us. I slammed on the brakes to pull over and take some pictures. 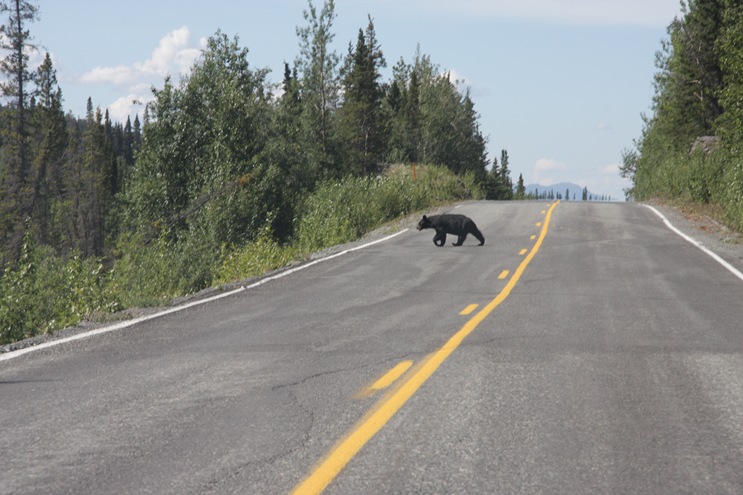 Then we noticed two baby bears in the bushes just ahead of us. They were afraid to come out because we were so close. I backed up a bit hoping to see them. We heard them screaming and soon mama bear came back and they were off into the woods. Oh well. 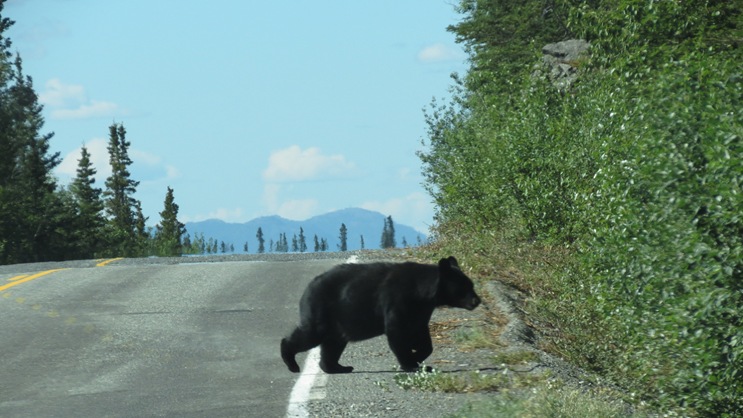 Another nice sunset view of the mountains. 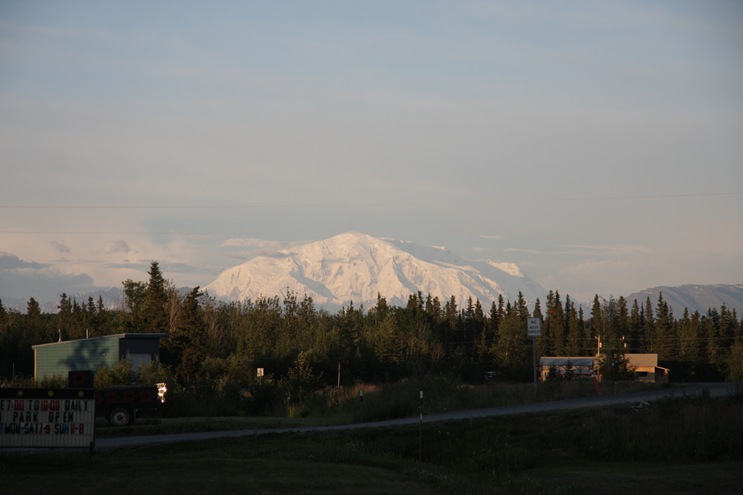 More planning tonight. I think we have things figured out so onwards tomorrow.