Just a bit of a step down from our previous night’s campsite. A gravel parking lot behind a gas station but it was right next to the signpost forest. 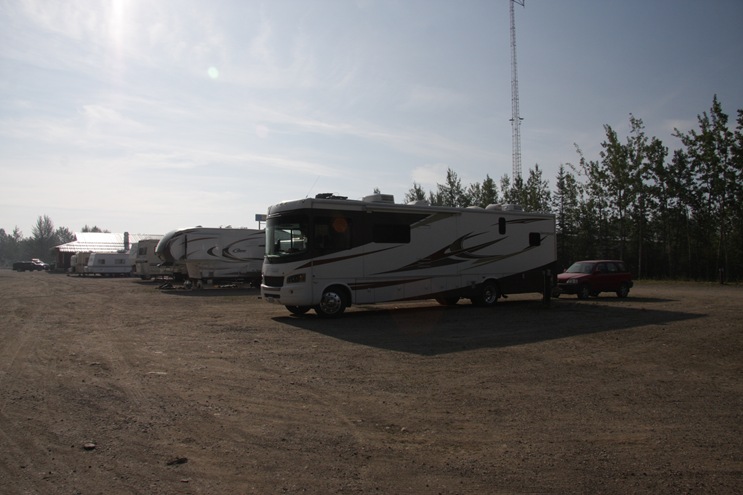 After the long drive yesterday I had planned on a short 100 km drive to a nice provincial park and then have an afternoon of relaxing.

When I went out to take the campground picture this morning  I smelled smoke. You can see the haze in the picture. That can only mean that there is a forest fire around here, which is not surprising after the long stretch of hot weather. It seemed to be heavier in the east and we were going south so we headed off.

At the junction of the Cassier and Alaska Highways I stopped at the gas station to ask if they had heard anything. She said there was a fire north of Watson Lake and one just east of us now but that the highway was still open. I had read in other people’s blogs from previous years of the highway being closed for many days due to forest fires.

It was pretty smoky but we couldn’t tell where it was from at first. 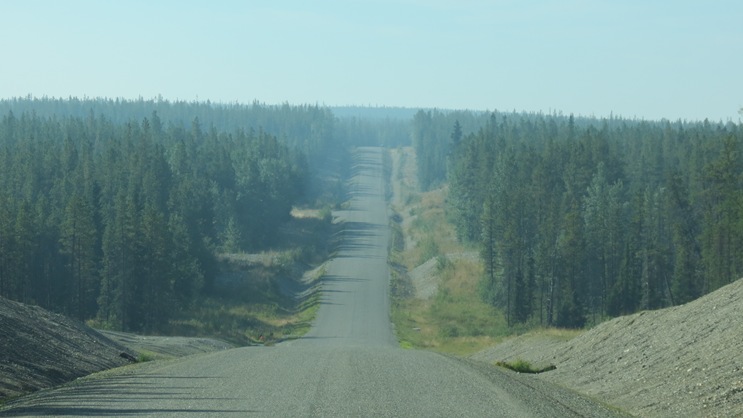 We passed a lot of evidence of previous fires. 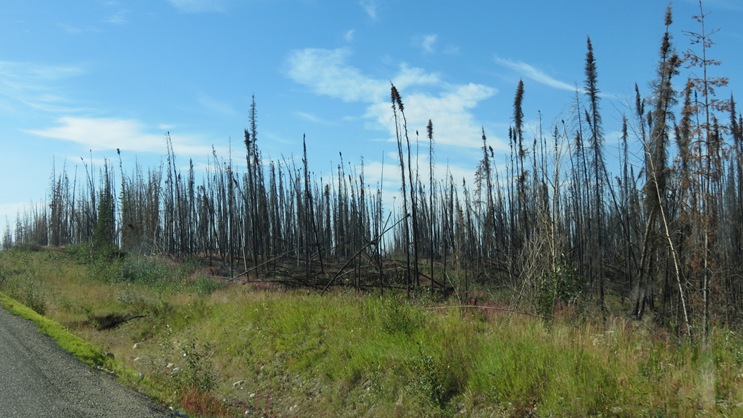 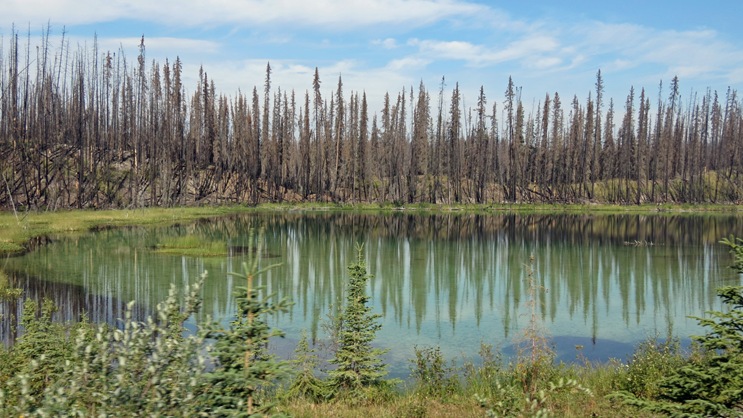 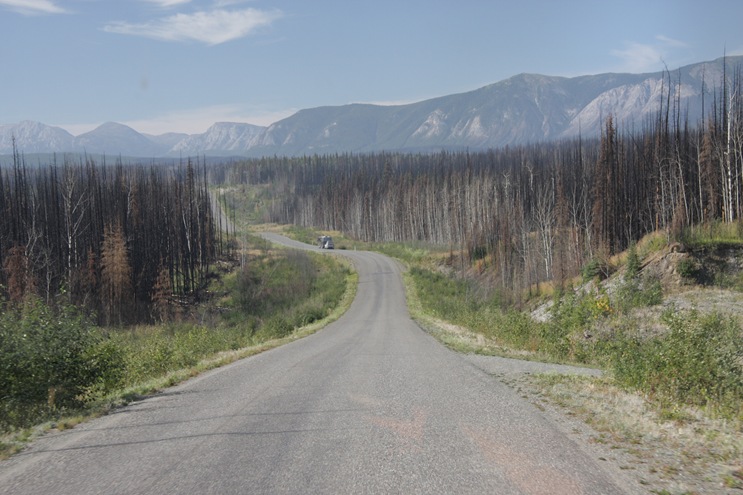 Then just as we were about to get to the campground we got a break in the trees alongside the road. Two fires. A big one farther away and a smaller closer one. 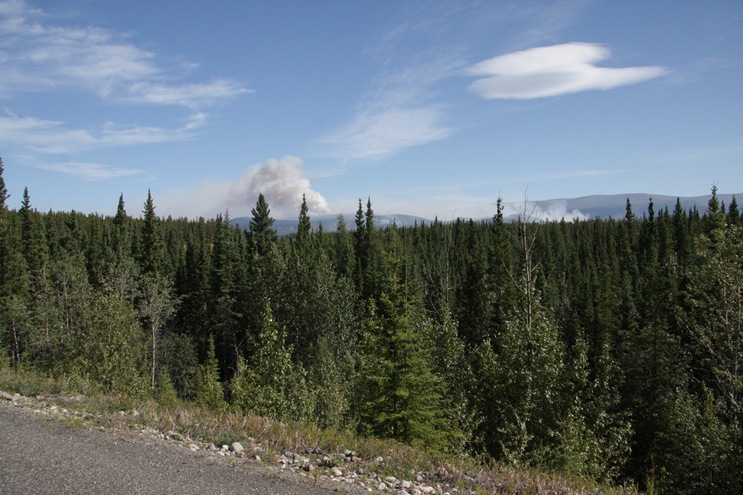 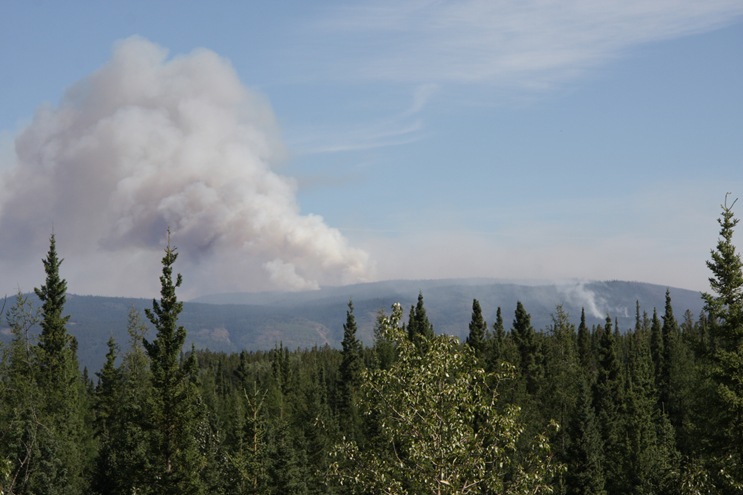 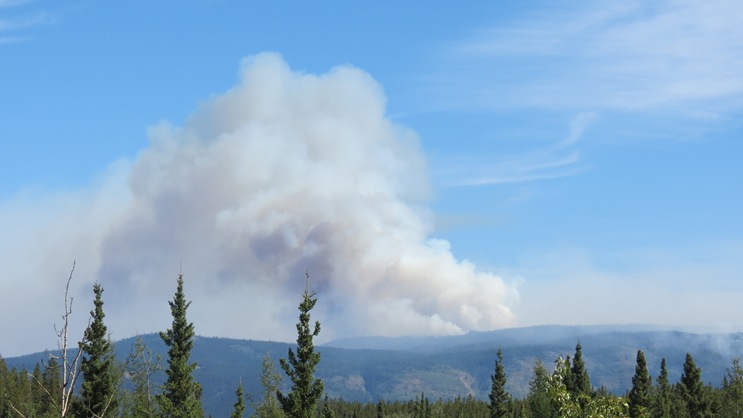 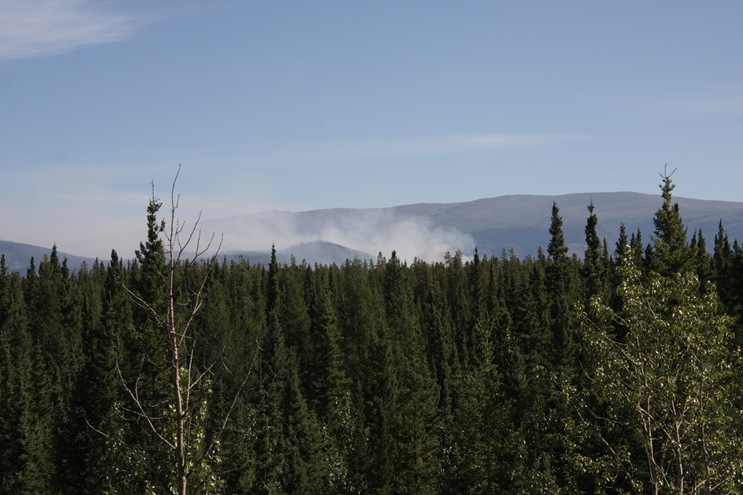 It didn’t look lie a good idea to camp here and when we actually got to the campground it was being used as a base for the fire fighters. Onward…

The scenery got nicer as we moved into the Cassier Mountains. 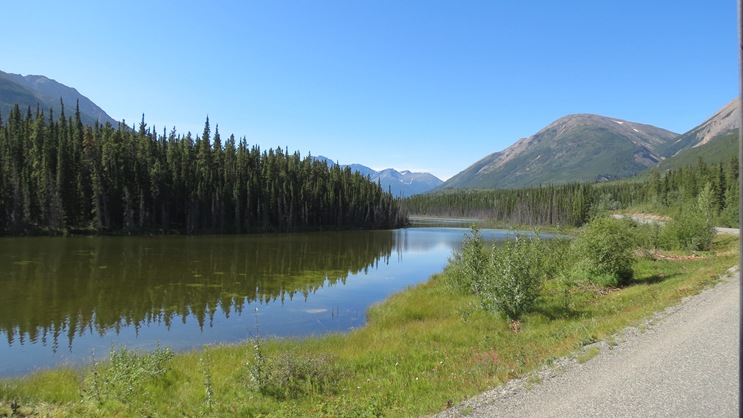 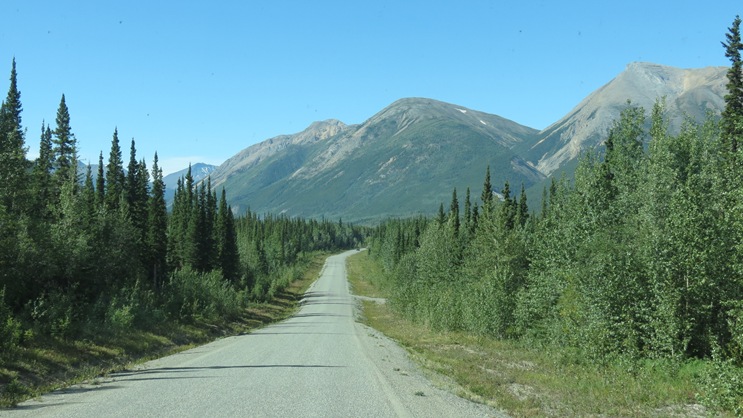 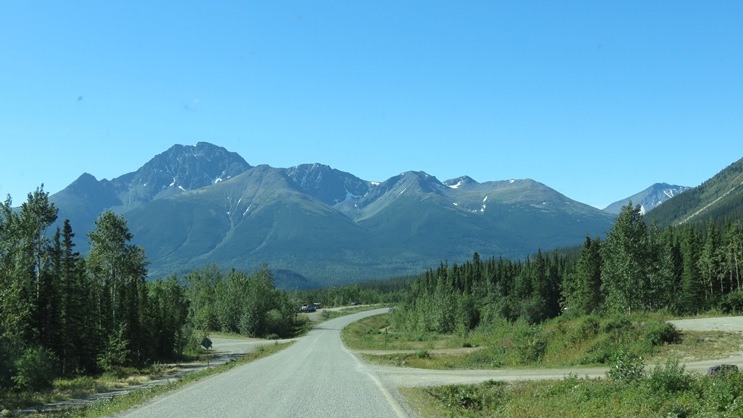 Even here we saw some smoke billowing up. 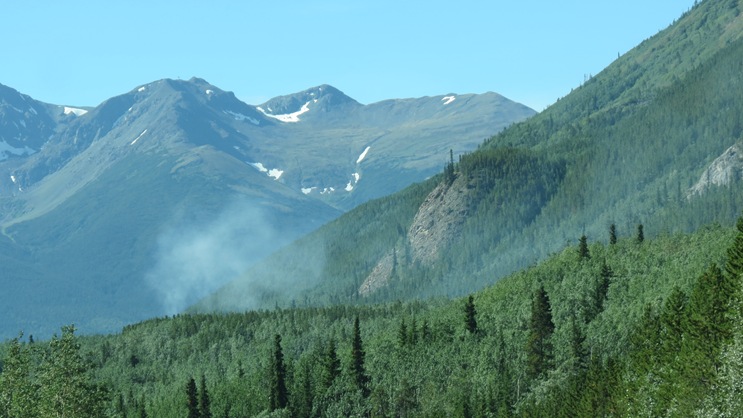 The Cassier Mountains supply over 90% of the worlds jade. They just find huge boulders of it. We stopped at a store in Jade City. Inside the store they have all the jewelry and carvings. Outside there are blocks sitting around waiting to be cut up. 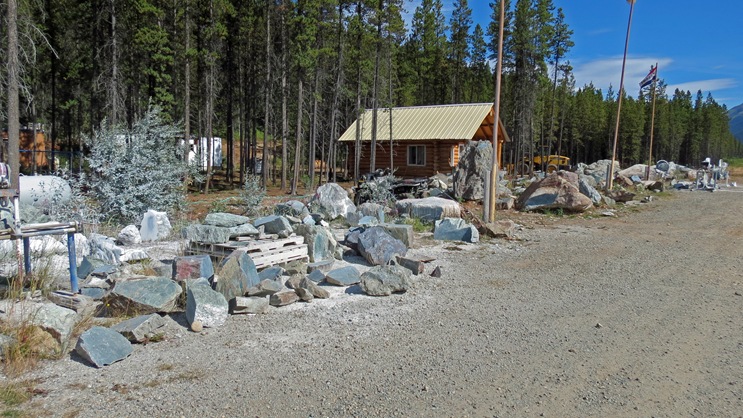 They cut the big ones into smaller chunks that you can buy unpolished or polished. One of the saws in the background was running, in a huge cloud of dust, when we got there. 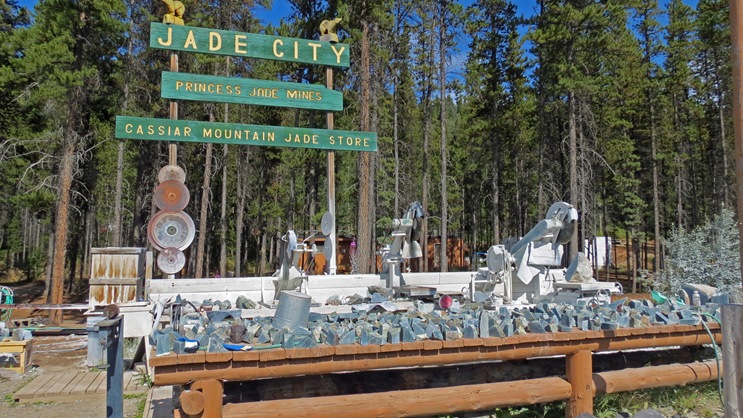 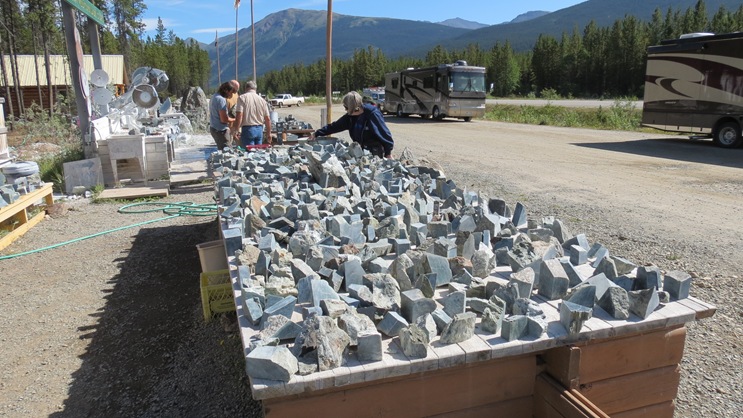 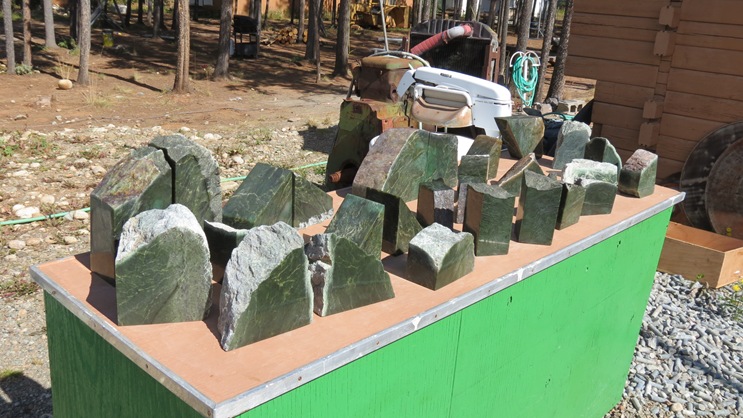 To encourage people to stop they offer free overnight parking. Since the next real campground was another 100 km down the road we took them up on it. It’s not much to to look at. No hookups but free WIFI and our satellite dish works.

You can’t beat the view of the rusting bulldozer and shovel. 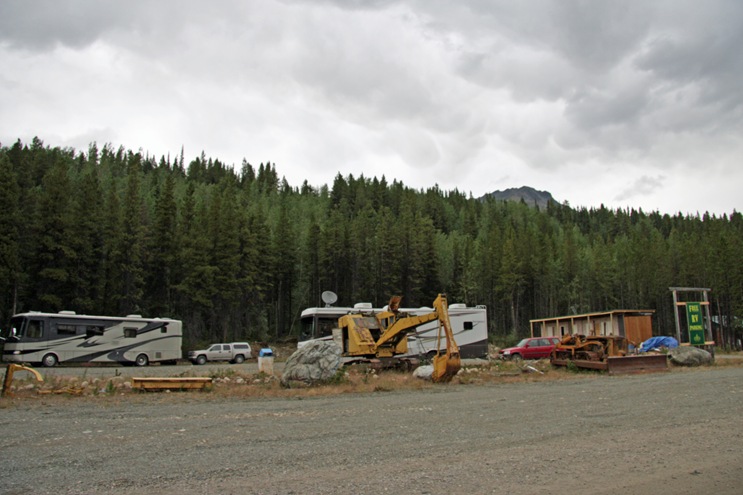 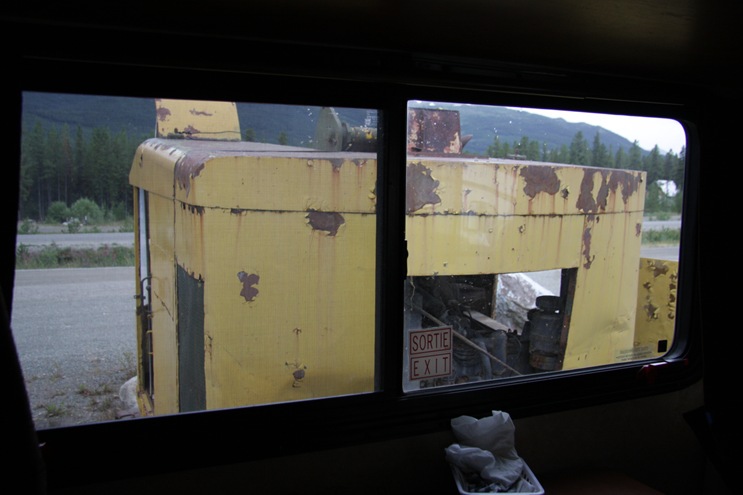 I parked there because the WIFI signal faded as I got farther away from the store.

Even though the forecast called for sunny skies, just after we got setup it started to rain. It wasn’t hard enough to help with the fires though.