Aug 8 – North on the Haines Highway

Last night I caught a few of the cruise ships leaving Skagway. 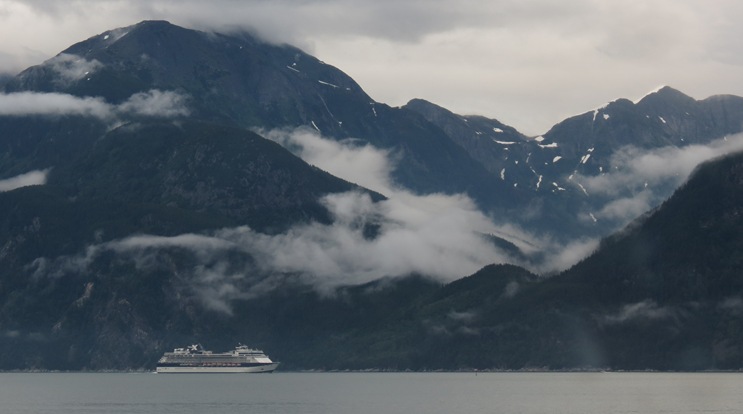 It has finally started to get dark before we go to bed. This was about 10 pm Alaska time. 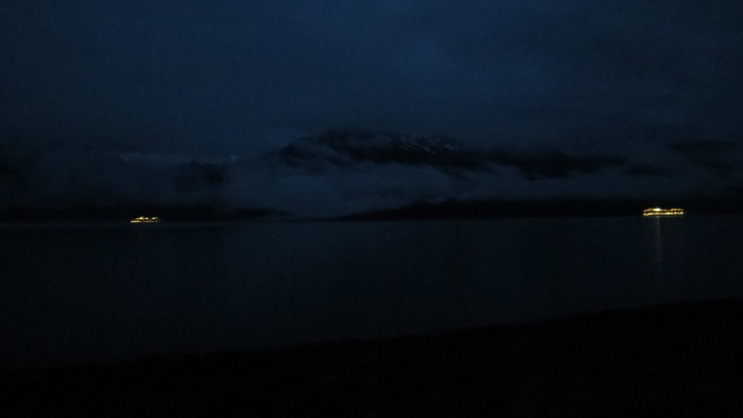 Despite the weather we had some very good days in Haines. We decided we had done what we wanted here and needed to go find some sun. Our next long term destination is Skagway.

Skagway is only about 1/2 hour by water up the Chilkoot Inlet. We could have put the RV on the ferry to get there very quickly. I figured it would cost around $200 - $250. Skagway is about 500 km by road from Haines. Definitely the long way around and it will probably cost us more in gas but we are in no hurry and there are some things to see in between.

Before we left I wanted to check one more thing out here. There is a hill west of town called Mount Ripley. One of the recommended hikes climbs up there for some all around views and if the weather had been better we might have tried. On re-reading my notes I remembered that someone’s blog had said there was a road that went at least part way up so off we went to check it out.

As we approached town we discovered that Haines’s once a week cruise ship had arrived. 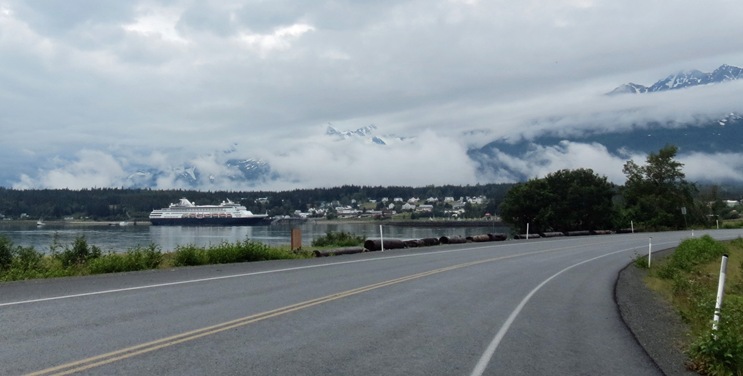 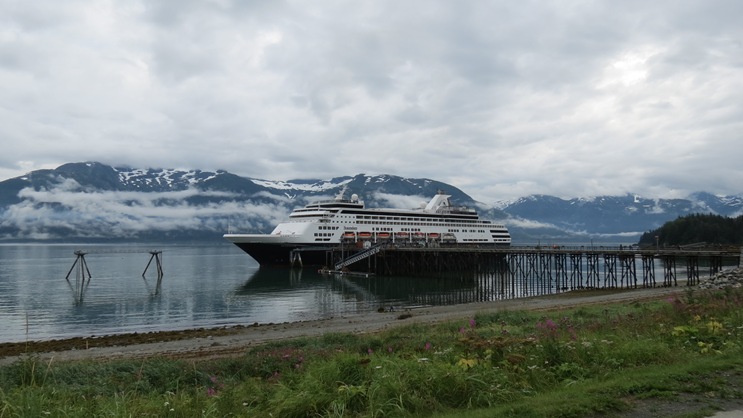 The Statendam is not that big a ship (as far as the new ones go) but it dwarfed the town and probably doubled the population. There were people out walking everywhere. Good for the economy but I read that the people of Haines are happy with once a week and they don’t want to become a complete tourist town like Skagway. 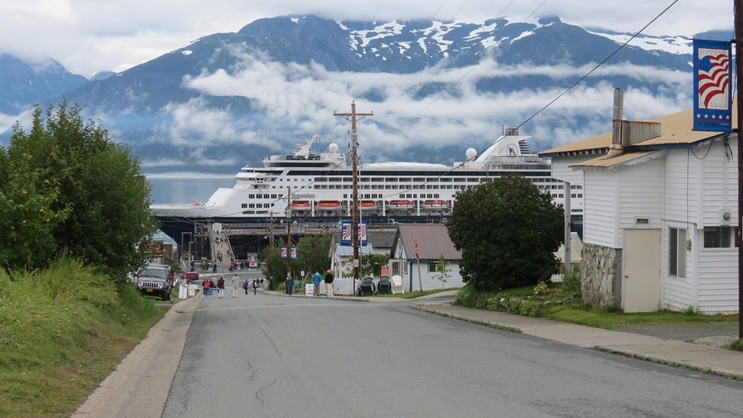 We found the road up Mount Ripley naturally called Mt Ripley Road. It was very steep. We saw that some people were building at the end. I am not sure how they would get up there in winter. 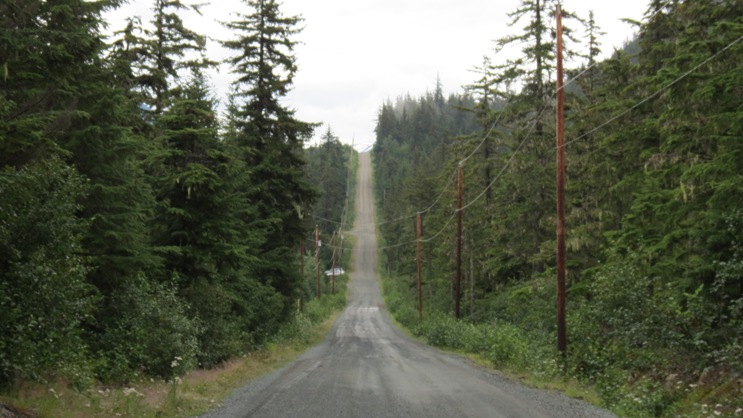 We found a nice viewpoint. The RV is parked just around the point in the left middle of the picture below. Haines is off to the left in the bay in front of the point.. 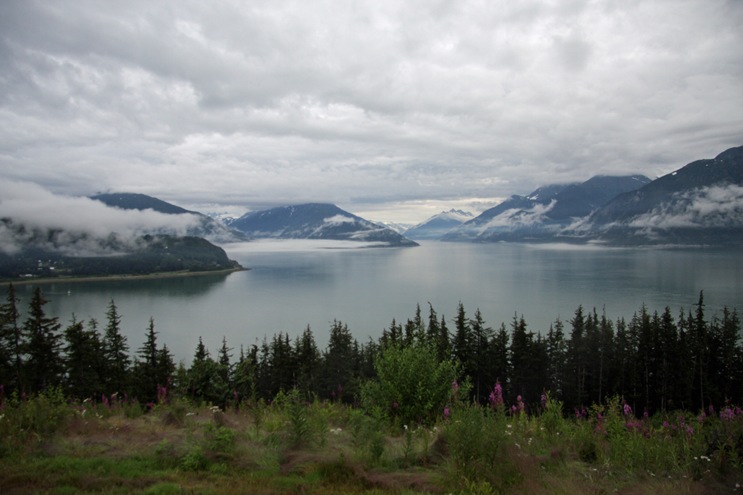 We headed back to the RV to pack up and head out. Up to now today the weather had been cloudy with a few bright spots but as soon as I got out to attach the car to the RV it started raining hard. As we drove through town we saw all the soaked cruise passengers hurrying back to the ship.

I had really hoped we could find some nice weather for our trip back up the Haines Highway but the forecast for the next several days was bad so we left and hoped for the best. It was not good. Most of the mountains were hidden behind the rain and fog. 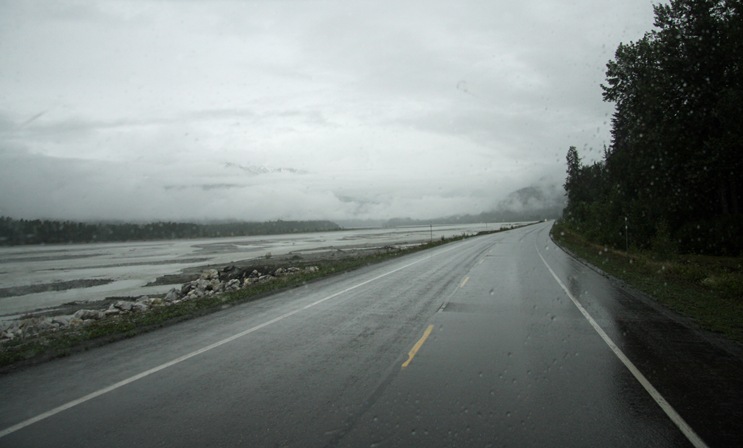 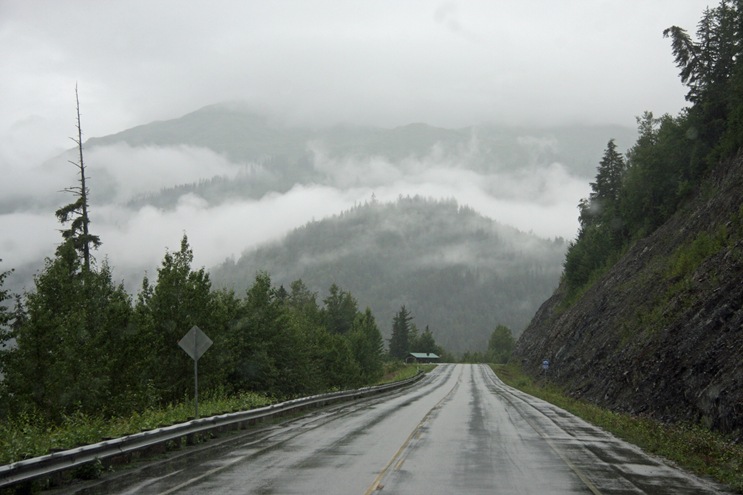 The Canadian border crossing officers was very friendly, asking about our trip and couldn’t believe we had driven the beast all the way from Ontario.

Then we started the long slow climb to about 3000 feet and the high point of the highway, 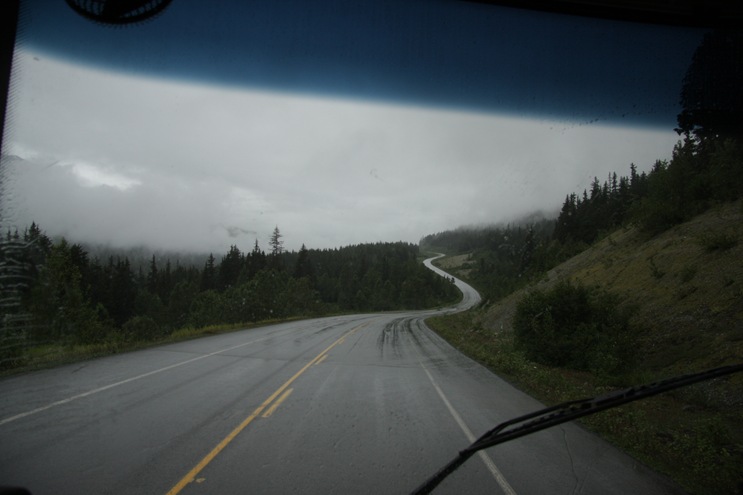 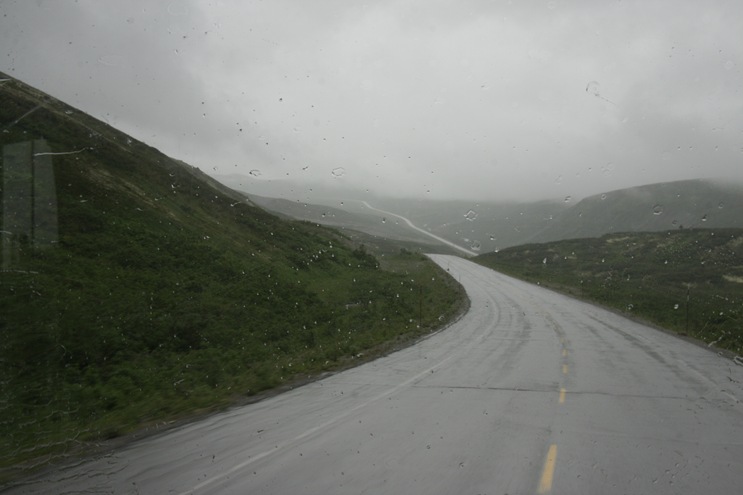 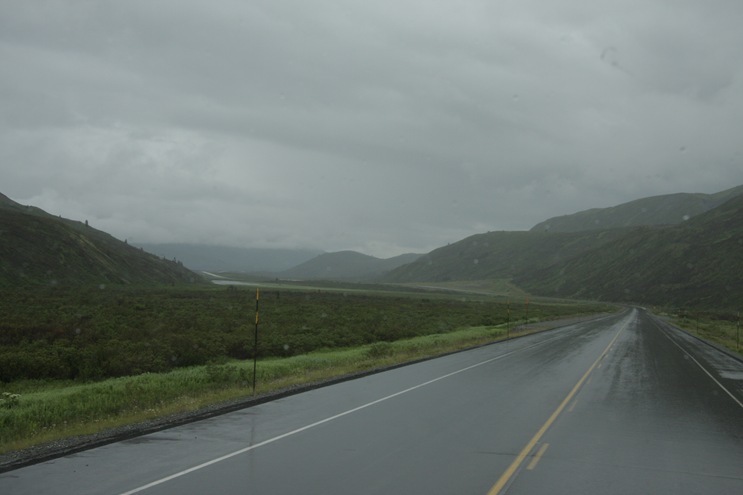 We could see some lighter skies off in the distance so we became hopeful. 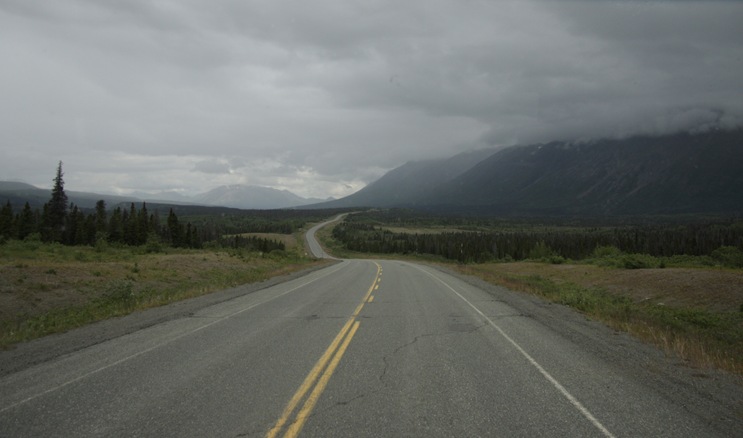 Just across the Yukon border we stopped at Million Dollar Falls. We never did figure out where the name came from. Very nice green water. It was still raining here. 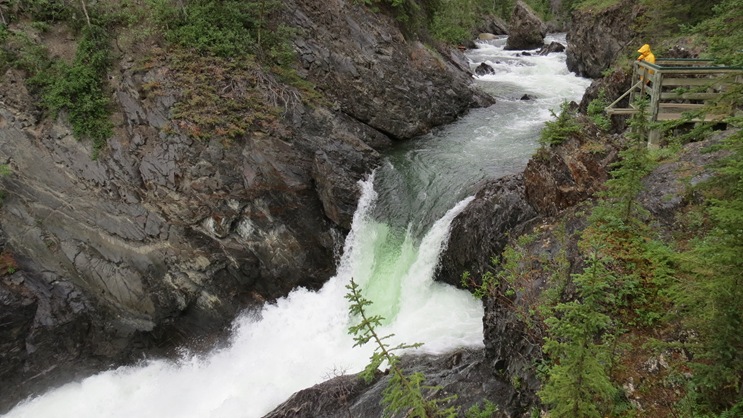 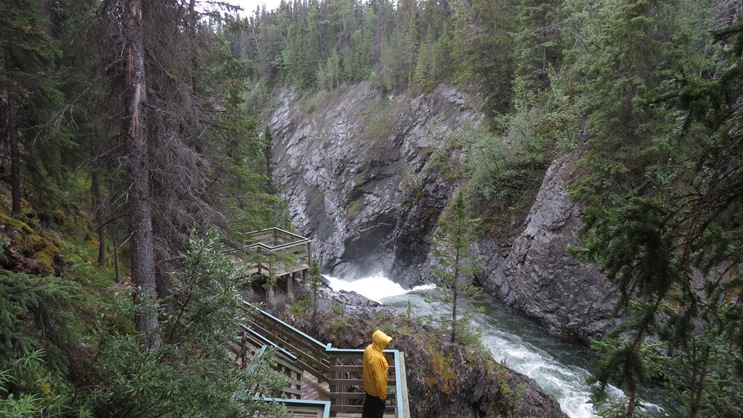 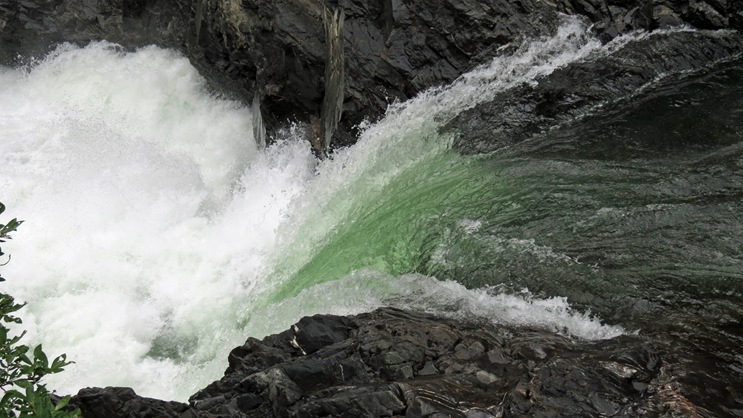 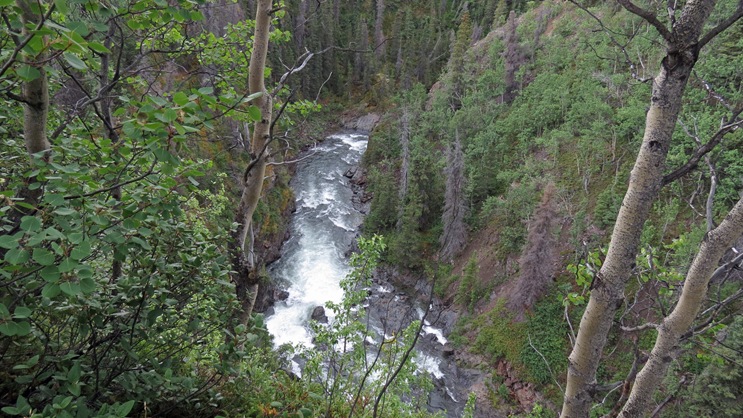 About another 1/2 hour farther north we arrived at our destination for the night. On the way south I had noticed this nice pullout beside Lake Dazadeash. It was in the sunshine! 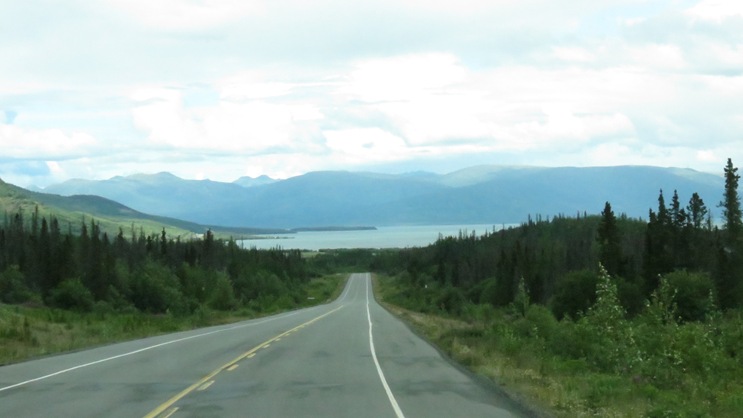 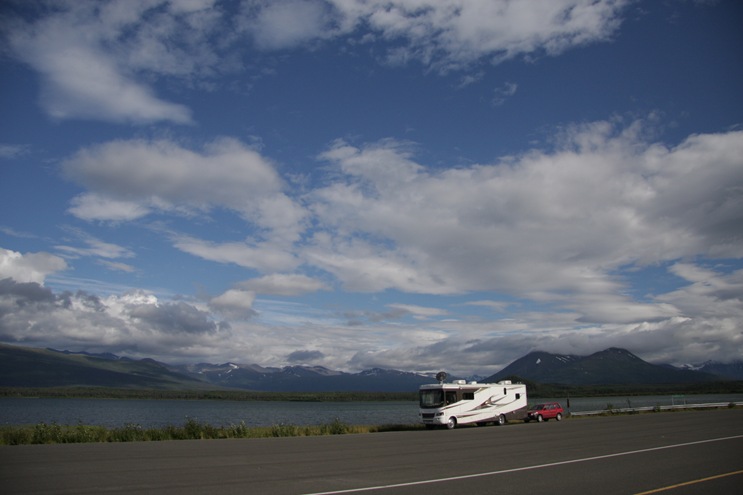 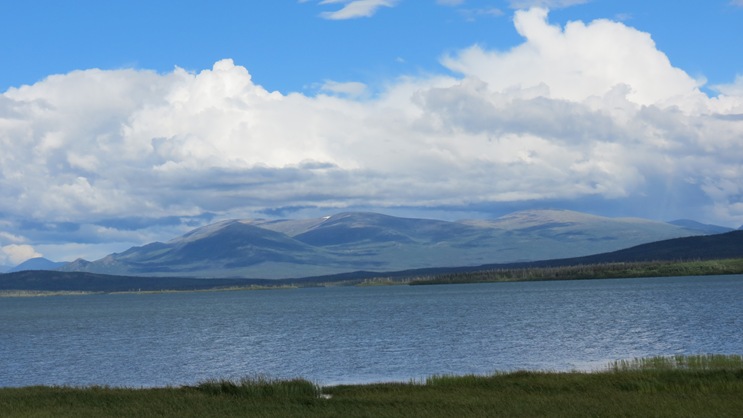 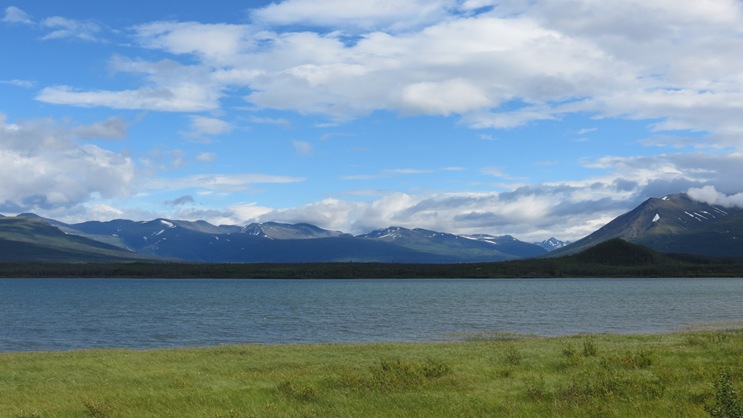 There is some rain off to the east so who knows what the weather will be like tonight but we are enjoying the sun while we can. 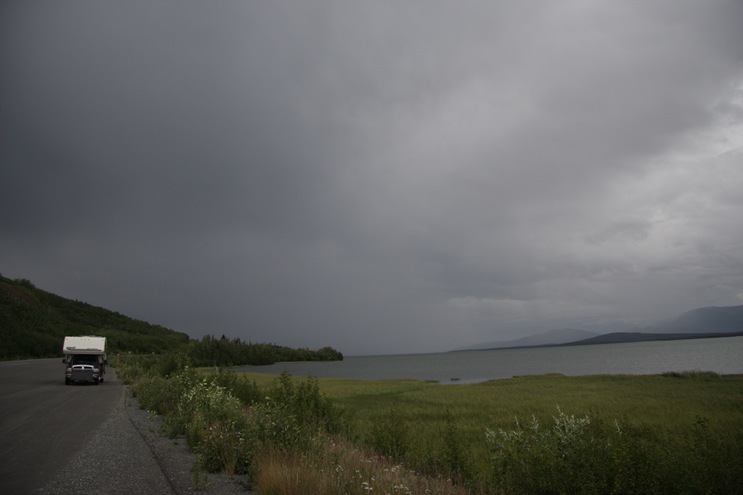 We should be back in Whitehorse tomorrow.