There are only really 2 campgrounds in Haines that are suitable for large RVs. The one we are at is at the entrance to town and is very nice. Wide spaces, immaculately kept up with lots of flowers. 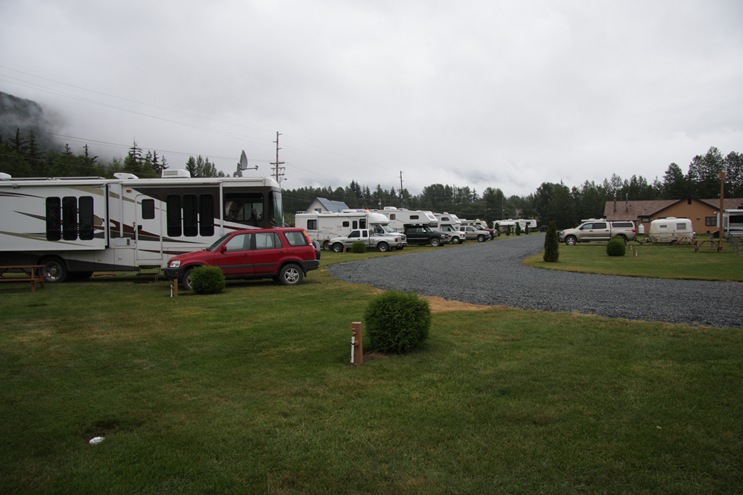 Unfortunately it doesn’t have much of a view. The other campground is right down on the water but it is small, expensive and the site are cramped. When we got to Haines, it was also full. 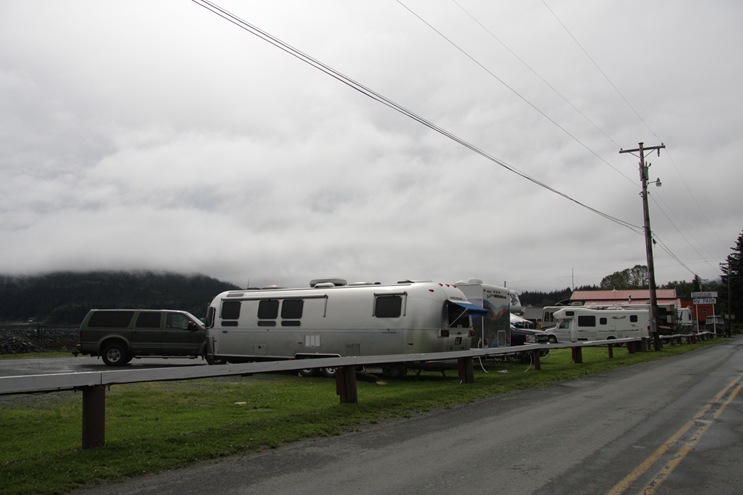 In someone’s blog they said that the sites are so close that when you put your slides out you can almost touch the next RV. The view is pretty good though. 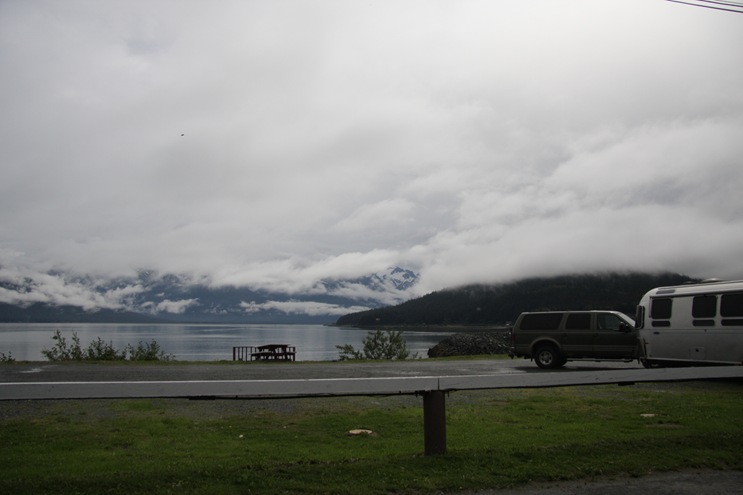 We decided on option 3 to get our view. On the way to the bear viewing the other day I had seen a nice pullout so we packed up and moved this morning. Obviously there is no internet here so that is why these posts were delayed. 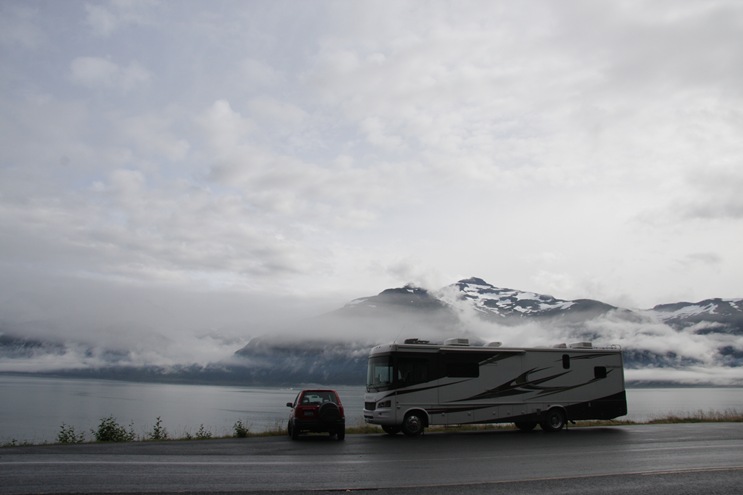 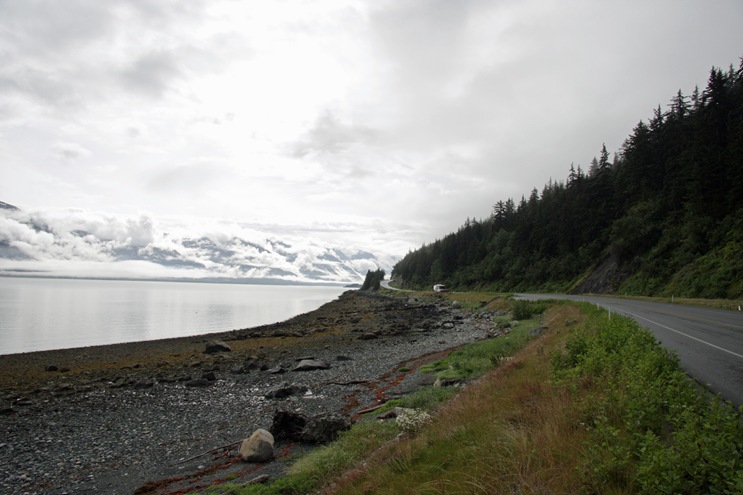 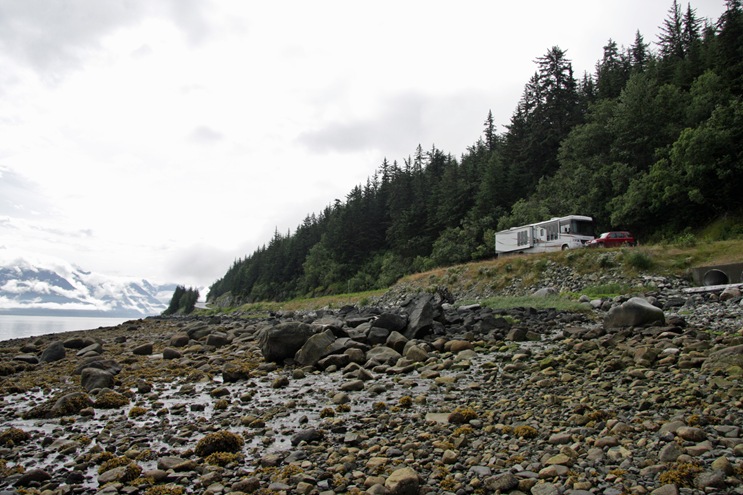 We look kind of lonely out here by ourselves. The weather today is lousy with rain pretty much all day. Even with the clouds the view is great through. 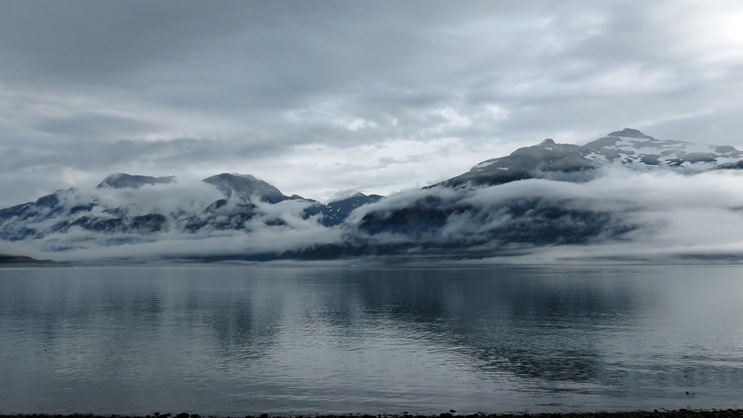 You can gauge the size of the sides of the fiord by the tour boat in the picture below. 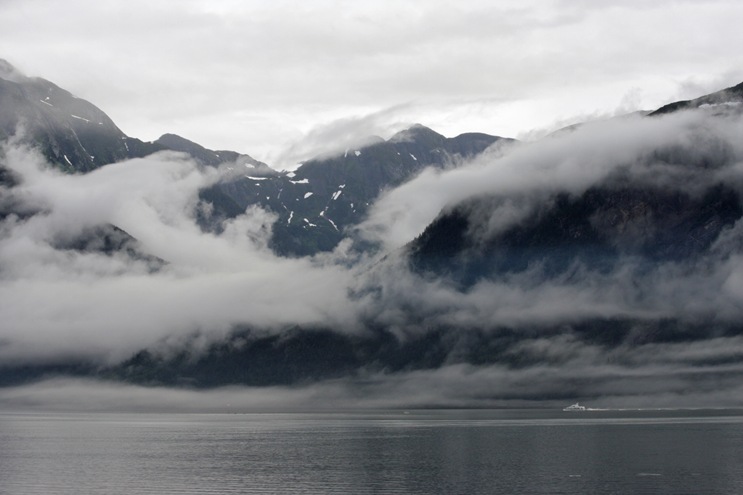 A fishing boat coming out of the mist. 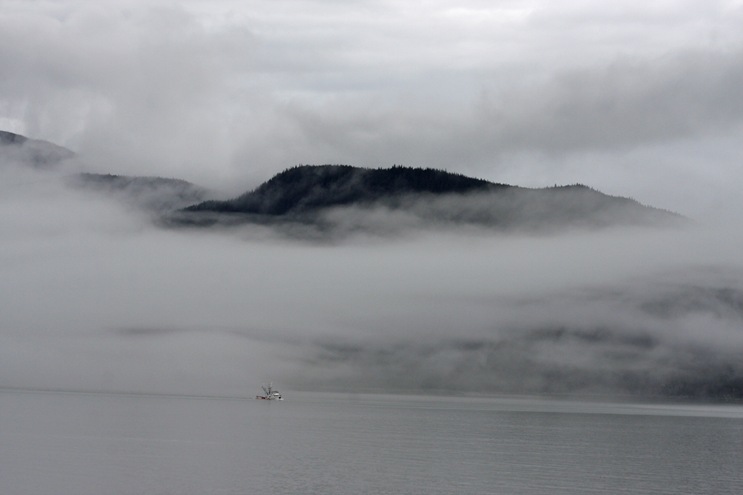 We even have a nice waterfall on the hill on the other side of the road. 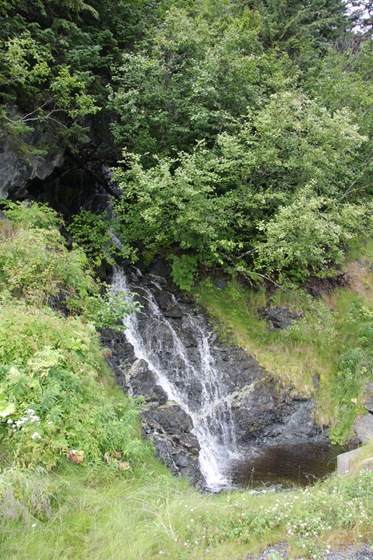 The view at the top of the falls into the misty forest had sort of a Lord of the Rings feel to it. 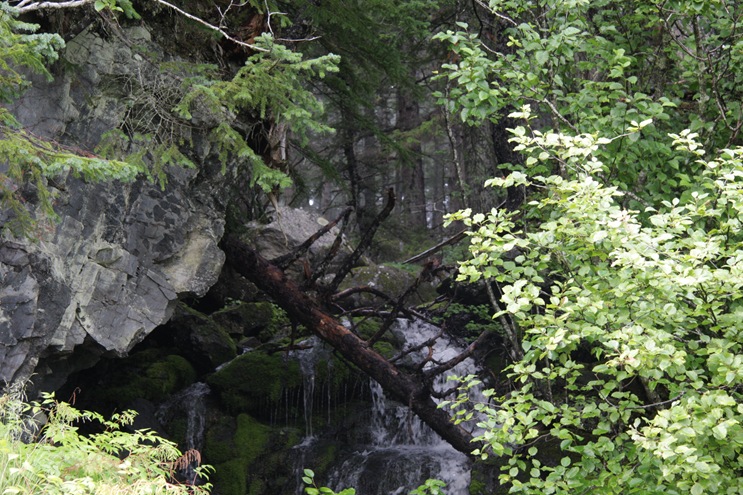 Since we weren’t going to be doing much outside today we went for a little car ride. The visitor’s center said we could go out to the fish packing plant and watch them in action. Not much was happening today but it was in a nice setting. 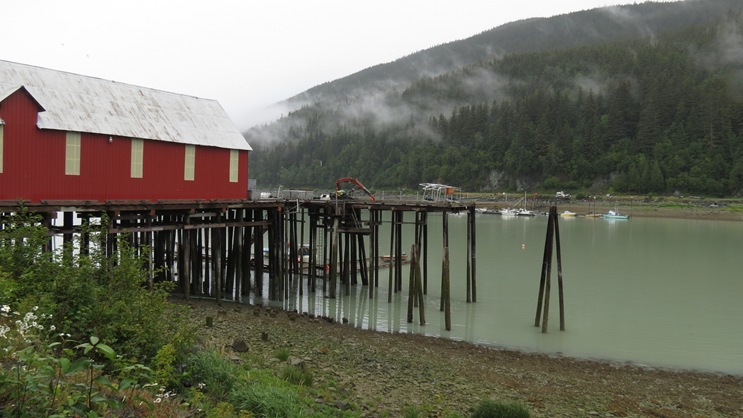 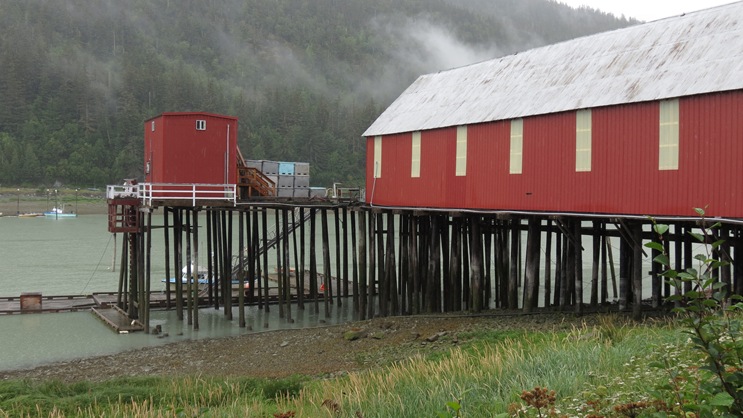 I guess they get some serious tides here. 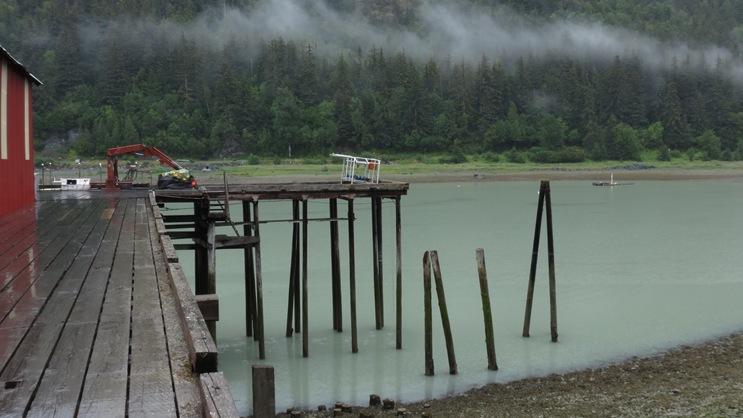 We went to the store but there was only a bit of fresh and smoked salmon. Then the lady said they were just about to cook up some Dungeness Crab. JACKPOT!

This is what I had been hoping for since I read about it in another blog. She said to just wander back to watch and then get some. It is obviously a steamy process. 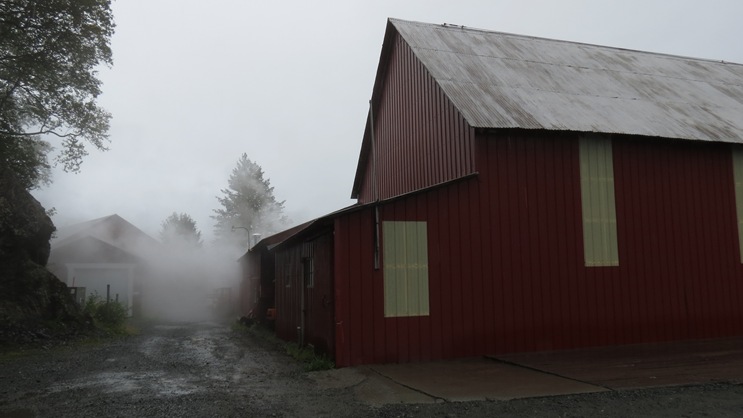 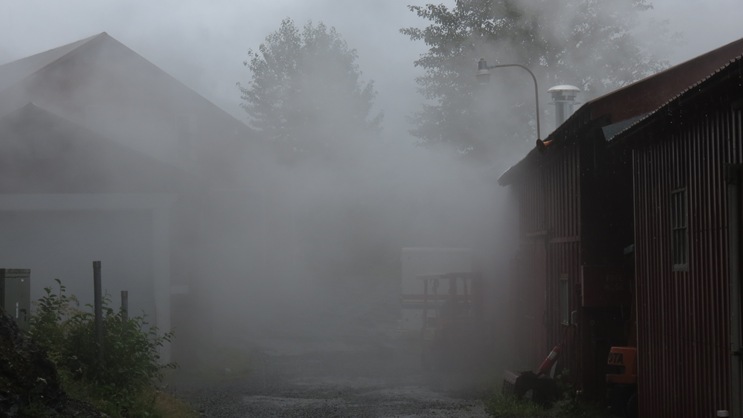 The son and daughter run the place but the father still works there. After the crab were done he just reached in the basket and handed me two. $12 a piece and almost too hot to hold. 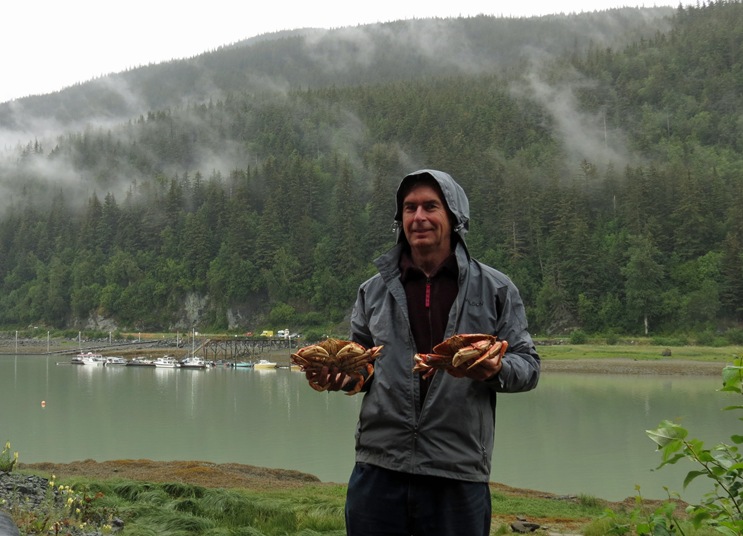 When we came we thought we might get something for dinner but since we hadn’t had lunch yet and these were so fresh we rushed back to the RV for a huge meal. 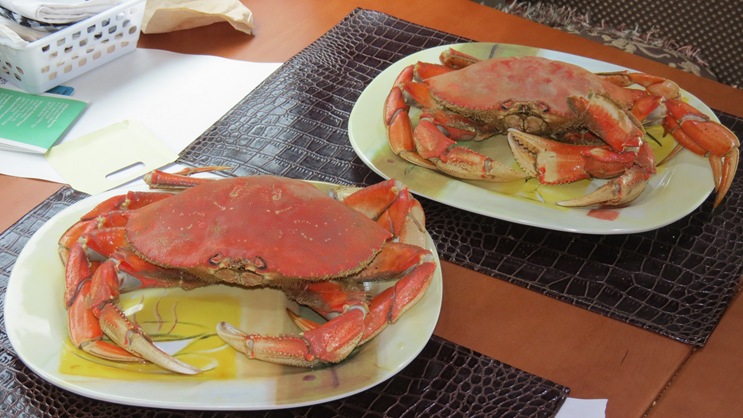 We are happy now though. It was a lot of work and a lot of lemon butter but we survived. They didn’t. 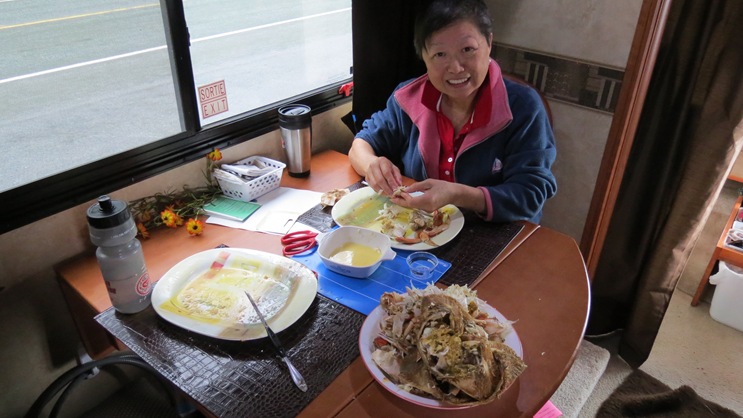 We spent the rest of the afternoon and evening just relaxing. I had been a bit worried about the traffic noise here since we are on the way to the bear viewing and we are also between the town and the ferry terminal. When the ferry was in port there was a lot of cars and trucks but once it left the occasional car wasn’t much of a distraction.

In the evening I had hoped to get some shots of the large cruise ships passing us on their way out of Skagway. Unfortunately they got here about 9 pm and it was kind of dark. It was also pretty foggy and white ships don’t show up in the fog too well.

I think this was the Radiance of the Seas. And this is all I could get of the Sea Princess. 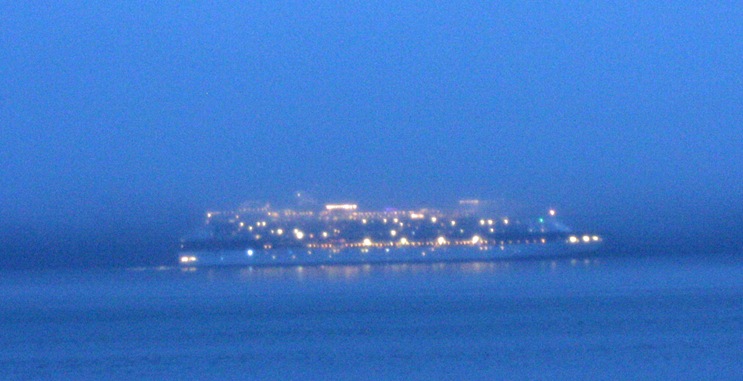 A pretty good day for what it looked like when we got up.