May 13 – To Burlington, Vermont

It was a cold night and we don’t heat the RV when we are asleep but we were warm under the covers. It was tough getting up in the morning to turn on the heater as it was 9C inside and 4C outside.

As we had to drive through Ottawa we waited until after 10am to leave. It rained on and off all day and the wind was quite strong but most of the time it was a tailwind so that was OK.

The GPS said the shortest way to Burlington was via Montreal but I hate driving through there and avoid it if at all possible. Instead we crossed into the US at Cornwall and took the scenic route across northern New York and then down the islands in Lake Champlain. I much prefer the smaller highways to the expressways.

There are two bridges at Cornwall. The first was in kind of rough shape. 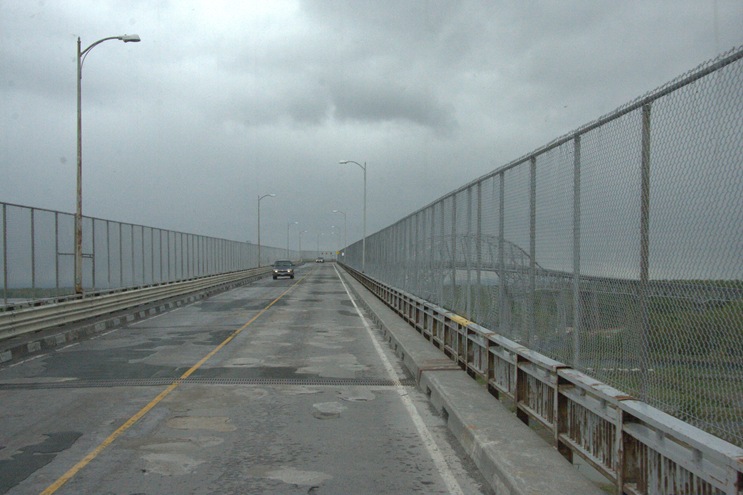 The second was much nicer. 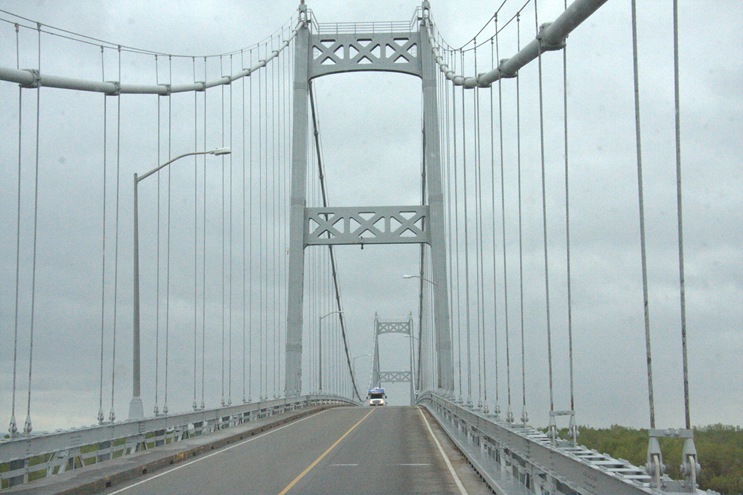 Customs was much easier than anticipated. We had been busy trying to use up all our fruit and vegetables, expecting them to be confiscated at the border. When we arrived there were three lines open with no signs for RVs so I took the middle one. An officer came out and motioned me over to the line closest to their office. I took this as a sign that we were sure to be searched.

When we got to the booth he asked where we were going and for how long. I said “going to Acadia National Park and 6 weeks”. He asked why it was going to take so long to get to someplace that you could drive to in 10 hours. I told him ours plans and he mentioned he had been to the park and told us about a hike that was not to be missed and then “Have a good trip”. Not a single question about food. Just about our nicest and easiest crossing.

The drive in New York was typical farm country once we got past the Indian reservation with the casino, cheap gas and cigarettes. 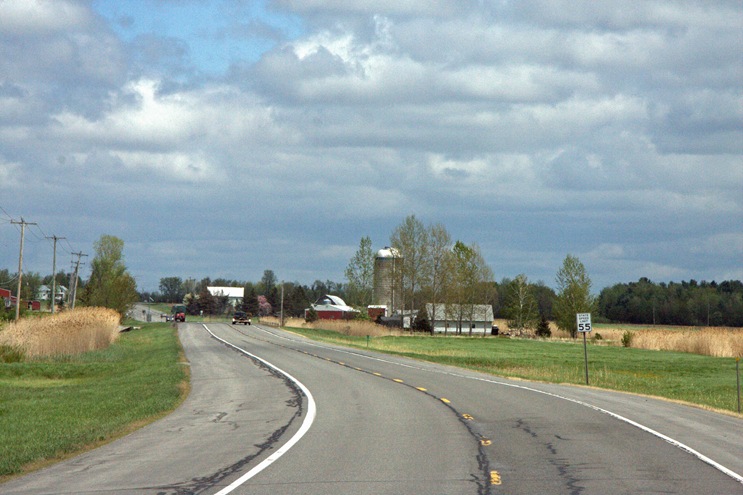 We went over several ridges that were covered in wind turbines all very furiously turning. I didn’t realize that the blades could bend so far. I tried to get a picture but it didn’t work out very well. 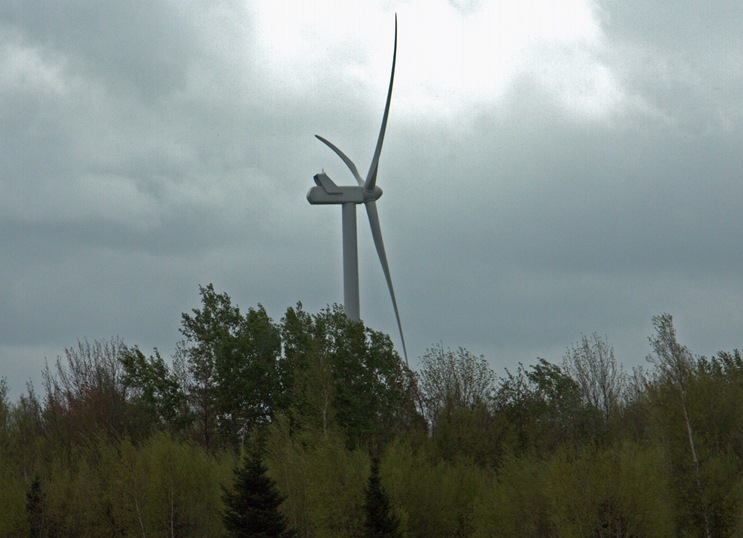 Across the bridge into Vermont and the islands in Lake Champlain. 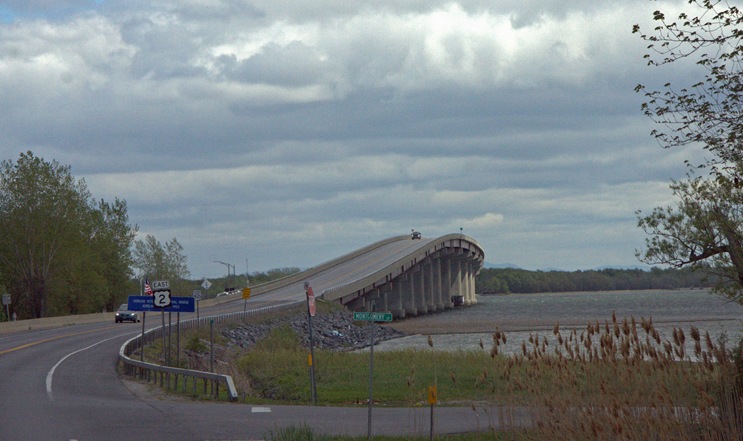 The roads were very narrow but the scenery was great. 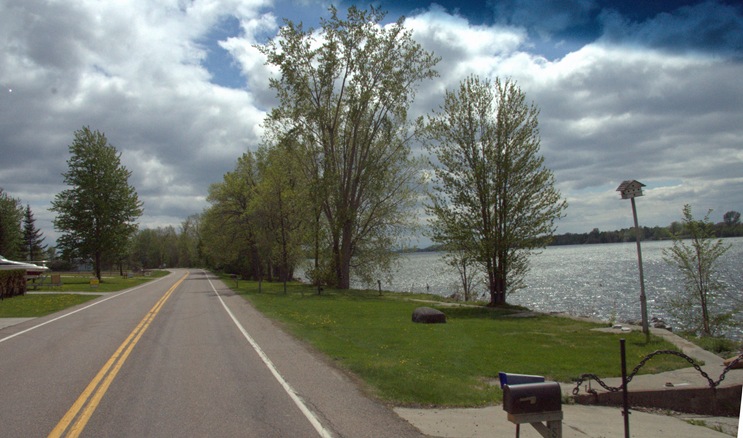 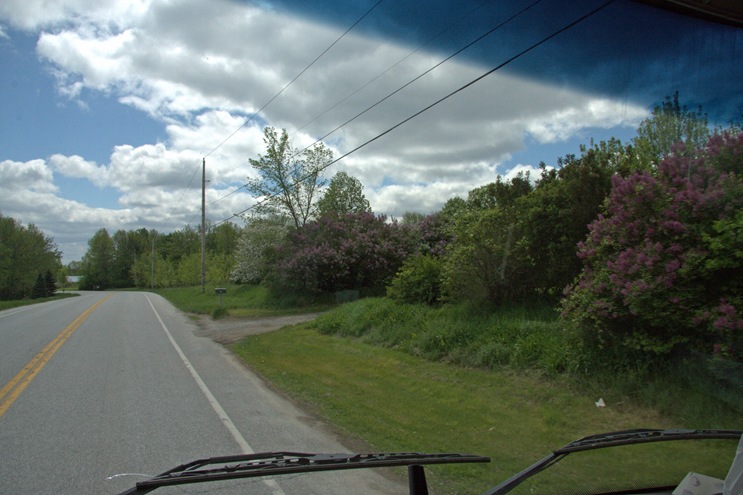 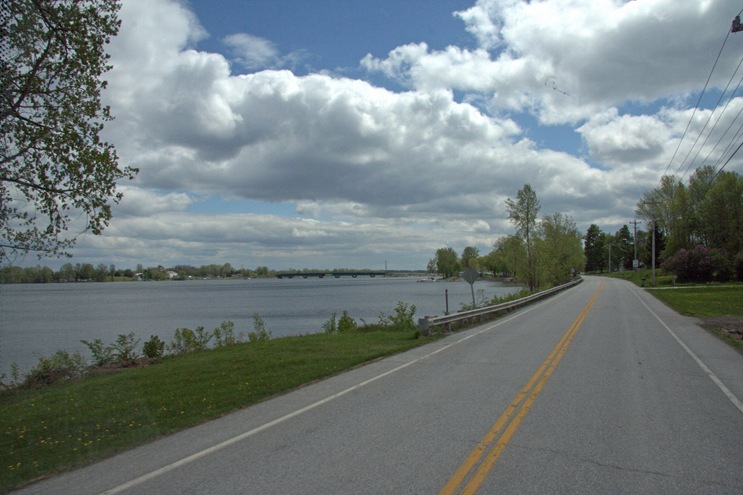 Then a thankfully short hop onto the tunnel of trees that is I-89 to Burlington. We had to drive right through the center of Burlington to get to the North Beach Campground. 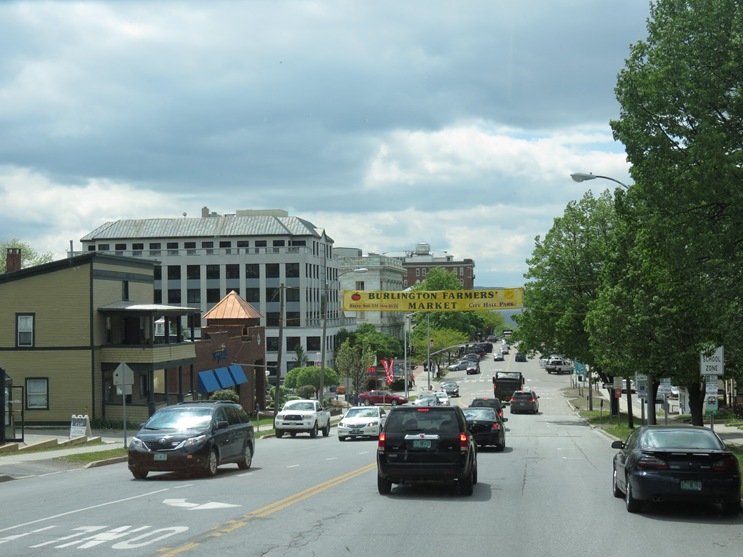 You can see the lake through the trees. 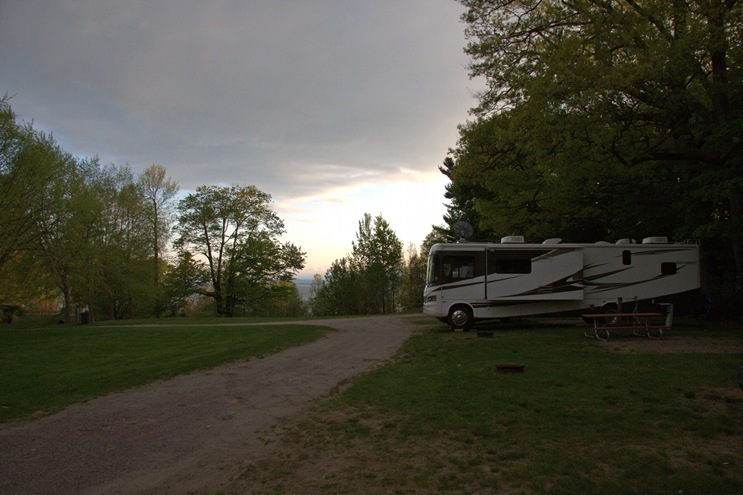 I initially backed as far as I could into the site. It turns out that the line to the satellites was parallel to the trees and they were blocked.  I moved about 4 feet out and got a perfect signal. Unfortunately the site had a steep slope at the front. It took more blocks than I had to level the RV. I had to go to Home Depot and get them to cut up some more 2x10s so that the front wheels wouldn’t be hanging in the air. 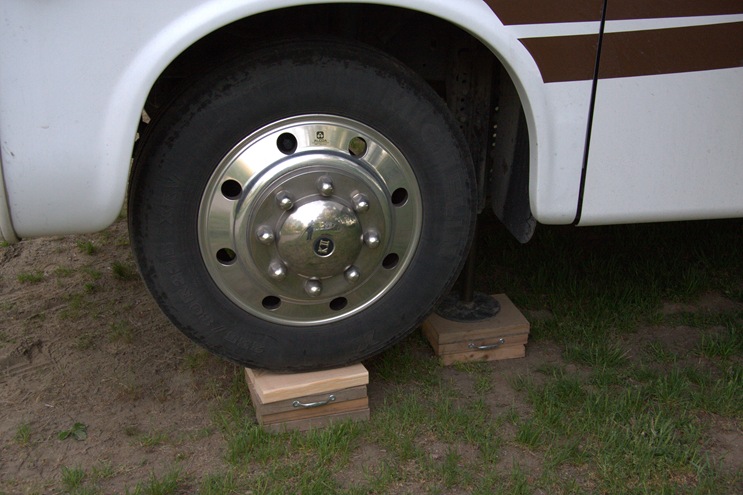 After dinner I went down to take a look at the beach. 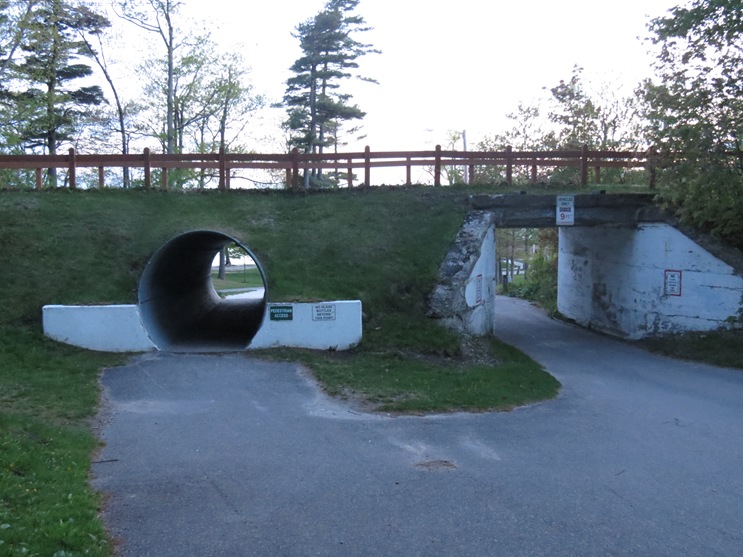 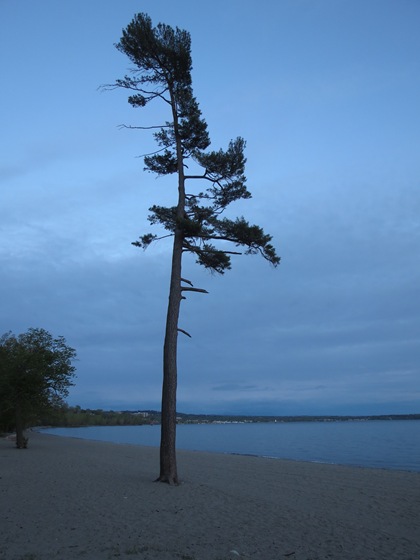 The crescent moon is up. 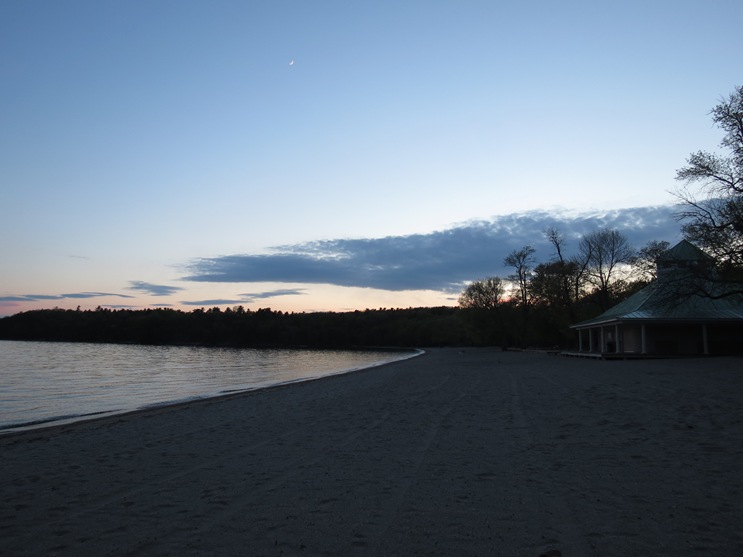 I love these pictures of the smoky mountains in the distance. They almost look like paintings. 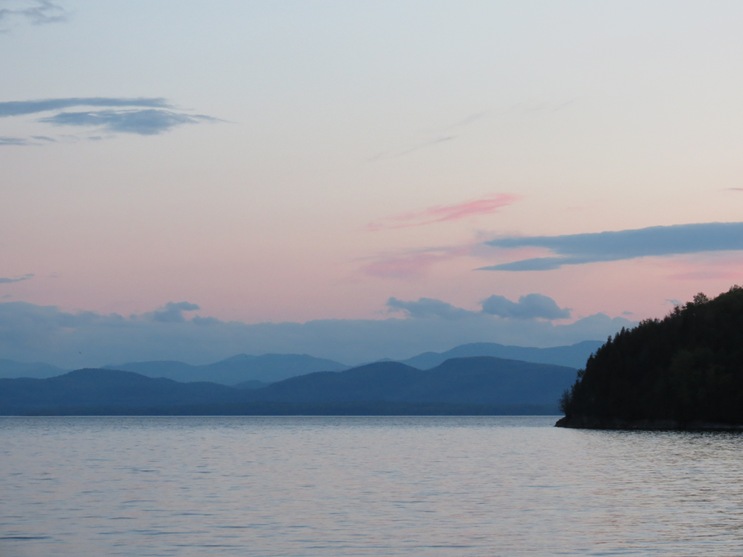 I first took the picture with the ship but decided I liked it better without. 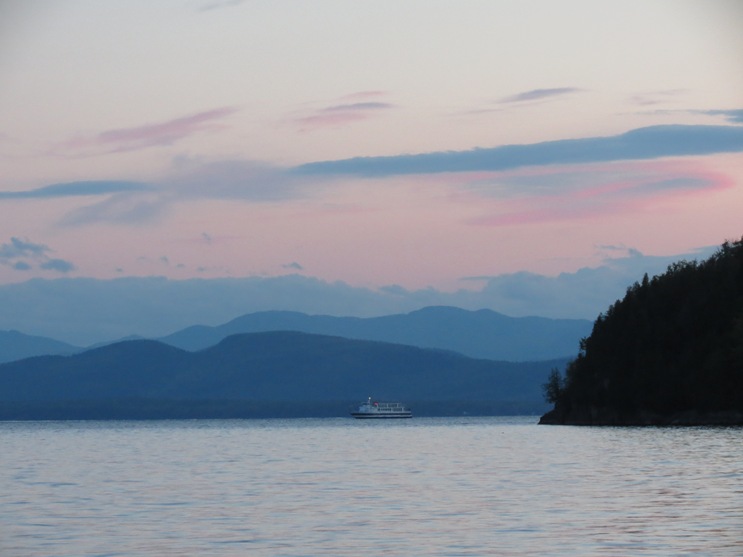 It is supposed to be clear but a bit cool tomorrow. We will probably try the bike path along the lake shore.