And another summer adventure begins…

I went and got the RV last Friday and we have spent the week packing and making some minor modifications. You would think that after doing this three other times we would be a bit more organized but it still just took a long time. Whenever we wandered around the house we would always find something else we forgot.

The basic plan is explore northern New England, PEI and Gaspe and then go back to our cottage in Ontario for the August long weekend. This is the time when the most of my relatives (cousins, aunt and uncles) are there and it has been a while since I have seen some of them. After that there is not much of a plan other than to wander around Ontario possibly camping with friends and family.

The reason we are in Ottawa is that my cousin is putting on an 80th birthday party for my aunt. The timing was perfect and it is only a bit out of the way. The party is tomorrow night and then there are some activities planned for Saturday. We will stay until at least Monday and maybe do some biking on the great Ottawa bike paths although the weather does not look great.

We are at the Ottawa Municipal Campground near Kanata. We can even get a satellite signal through a convenient hole in the trees. The campground manager told me that the place is about to be overrun by an Airstream trailer rally and that most of the sites will be in use. 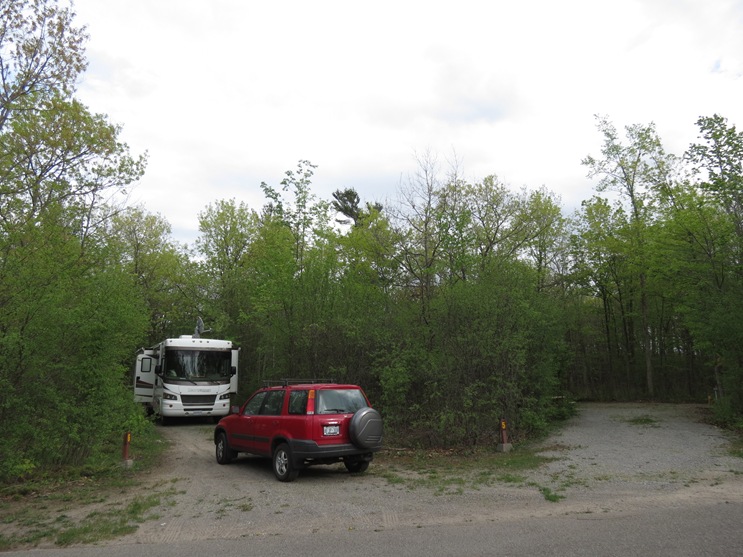 When we went to Newfoundland 4 years ago we also stayed here for a few days. Then, we stayed in a site two over from where we are now. Coincidentally in that site, today, there is now an RV identical to ours (even the same model). 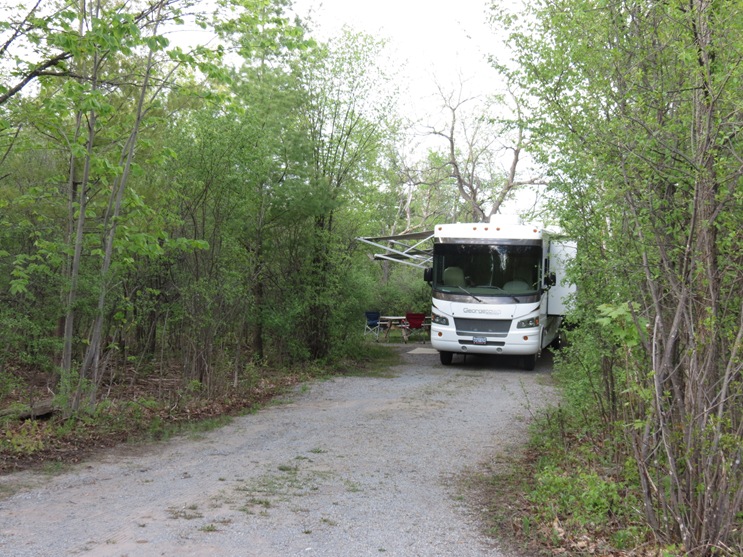 We only did a few modifications to the RV this year. We pretty much have it the way we like it.

We brought the bike on our first RV trip to Newfoundland. It was sort of a waste as we only used it twice and it was a huge pain taking it off the rooftop carrier on the car each time we wanted to go into town. The last two years we did not bring it and didn’t really miss it other than a few opportunities.

One job this week was to figure out a way to mount the bike on the trailer hitch so we could just leave it on the RV when we weren’t using it. I found and cut some U channel that I clamped to the hitch and then the rooftop carrier from the car will just fit over the bolts that protrude from the channel. 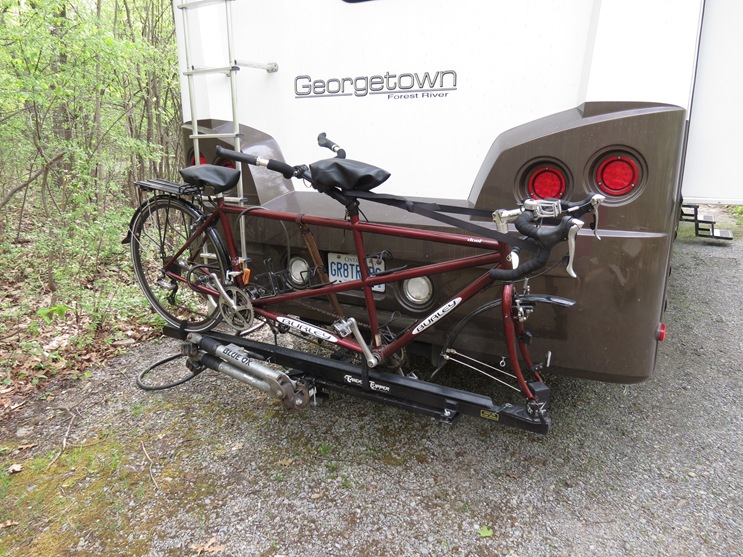 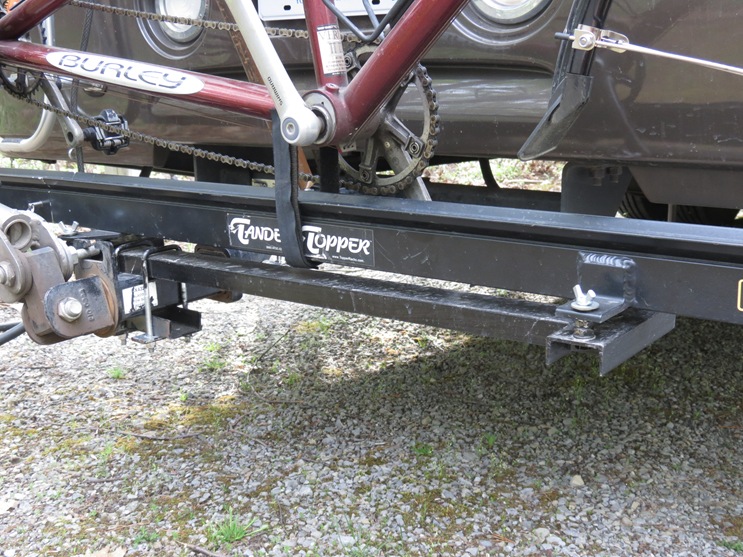 The bike is balanced end to end so hopefully their won’t be too much strain on the mount.

Jennie then custom fit and sewed this tarp to fit over the bike. I am hesitant to leave it on the bike when we travel because I worry that the wind load would be too much for my handiwork. 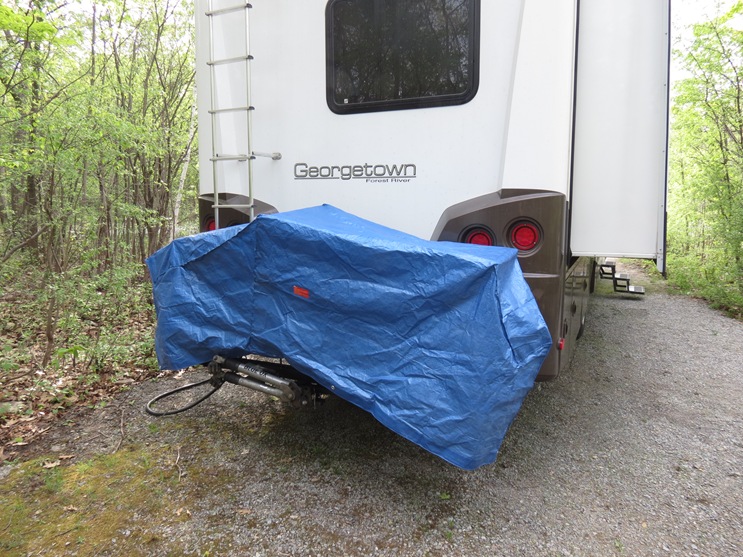 The only other “major” thing we did to the RV was to replace the mattress. The one that came with it was pretty basic and was getting quite saggy. It was king size but we only use a queen at home so we bought a new queen size. It is amazing how much more floor space there now is in the bedroom. 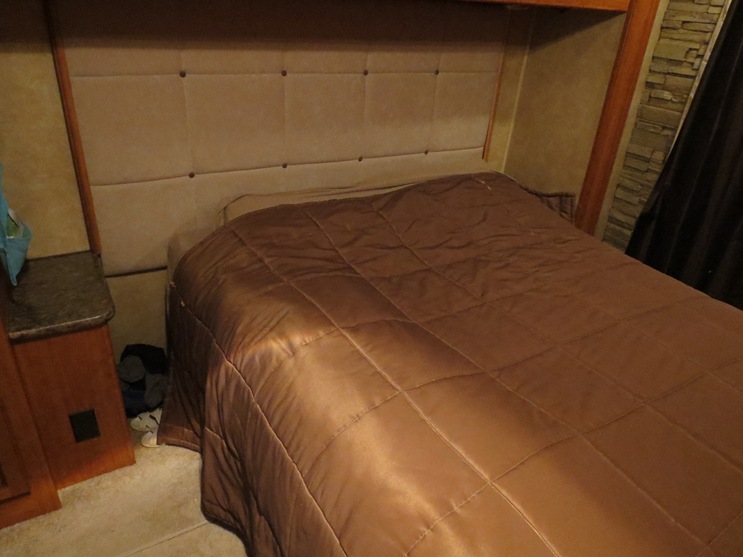 You can see from the headboard what the difference is. Of course, Jennie’s side got all the extra floor space.

When I first put the new mattress in it looked tiny compared to the old one. I had to go inside to measure the one in the house to make sure it was the same size.

We haven’t decided what to do tomorrow. It all depends on the weather or we may just take a day off after this last busy week of preparations.

I hope you enjoy the blog this year …