On Tuesday night (today is Thursday) it poured rain all night and most of yesterday morning so we took the day off. By the afternoon it did get sunny again but we were too much in “do nothing mode” to get ourselves motivated.

Last night I had planned to go to a couple of waterfalls today but when we got up the forecast called for rain or thunderstorms in the late morning and afternoon. We switched to going to Glen Canyon Regional Park, which is just south of Kelowna on the west side of the lake in an area called Gellatly.

When we got to the park the gates were shut and a sign said that the park was closed due to dangerous conditions. We guessed that all the rain had swollen the creek that ran down the canyon and eroded some of the trail.

On the drive in we had noticed a trail along the waterfront so we parked near where the creek entered the lake. We could see why the park was closed. The creek was nearly overflowing its banks. 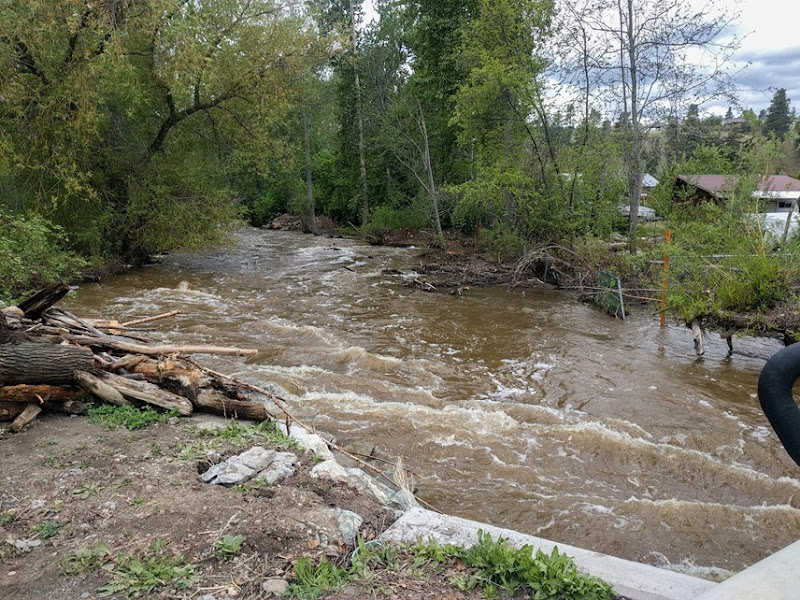 And had almost reached the bridge over the road. 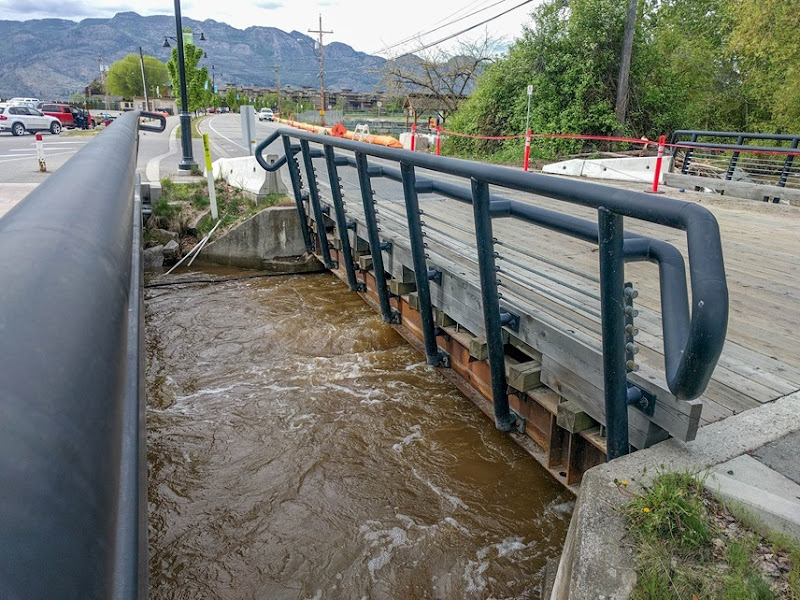 We first walked south, behind of some very large waterfront houses. 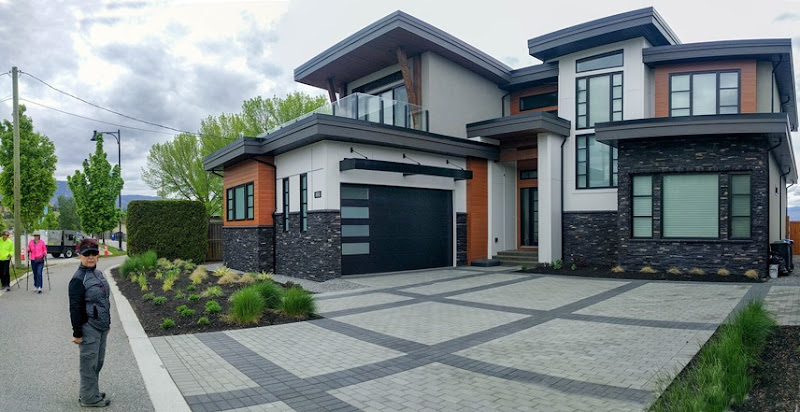 Across the street was a large field with the creek at the far end. They had a large tube running the length of the field, I guess waiting for it to flood. 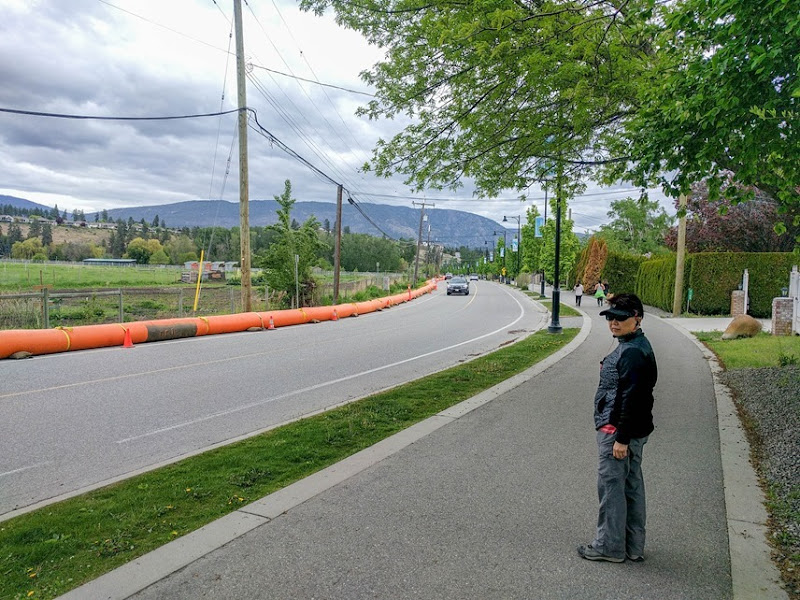 A big pump at the ready as well. 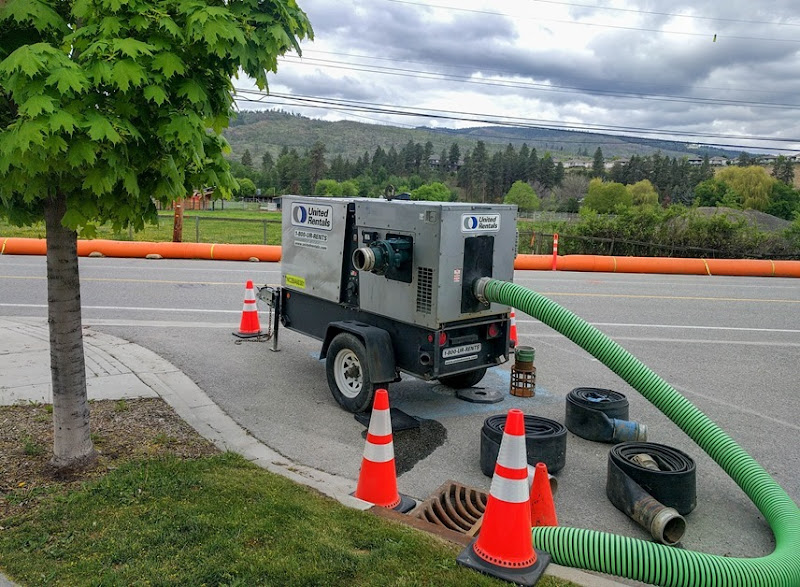 This place even sandbagged their driveway. 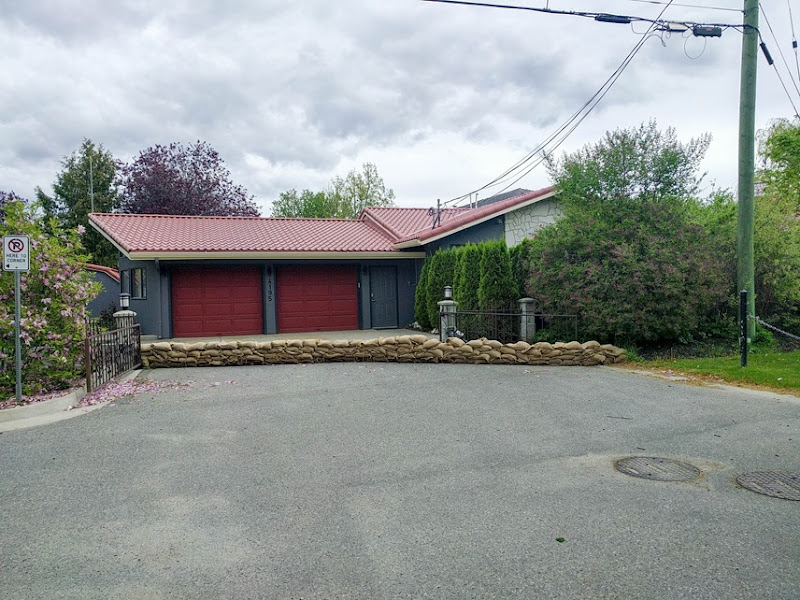 The walkway continued in front of a huge resort complex. 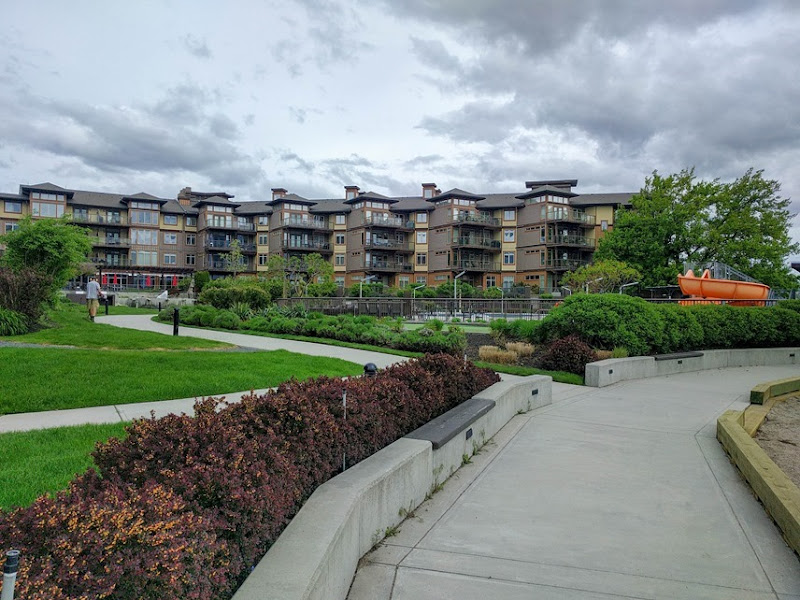 And ended at the Gellatly Nut Farm Regional Park. One of the early settlers of the area had had a huge nut farm. This park had some samples of the various trees he grew. There were Walnuts, Chestnuts, Hazelnuts, Butternuts and many more. 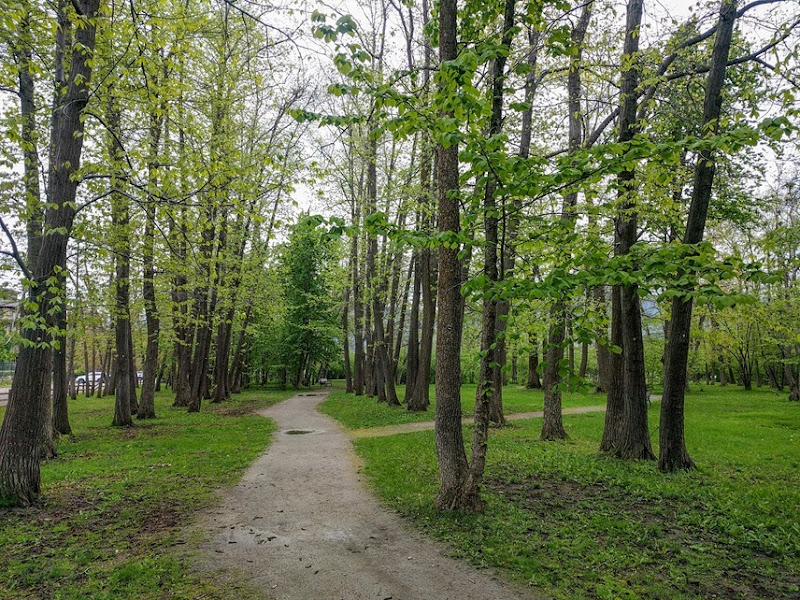 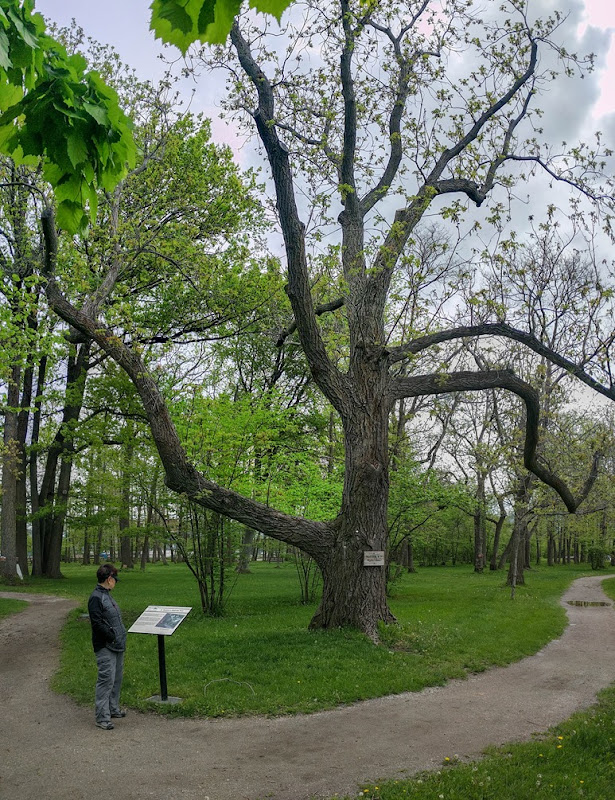 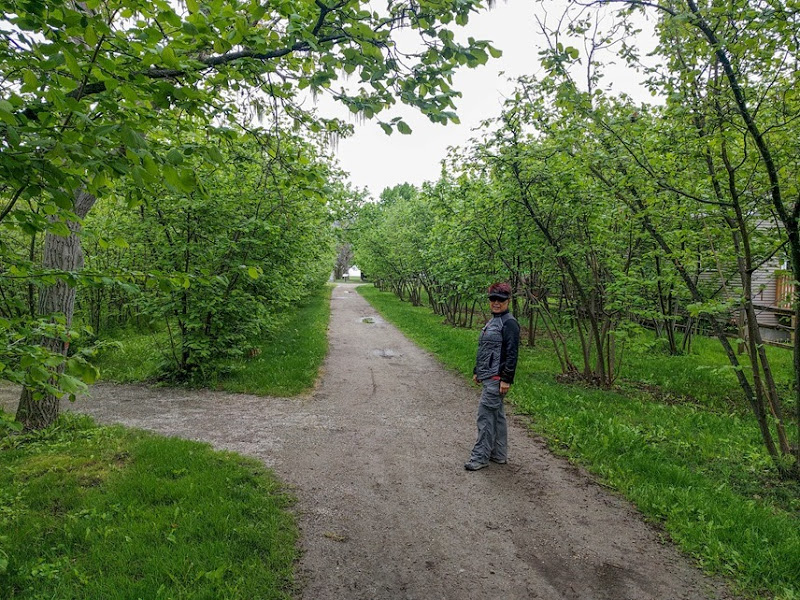 We retraced our steps passed the car and walked out and back along the shoreline path. 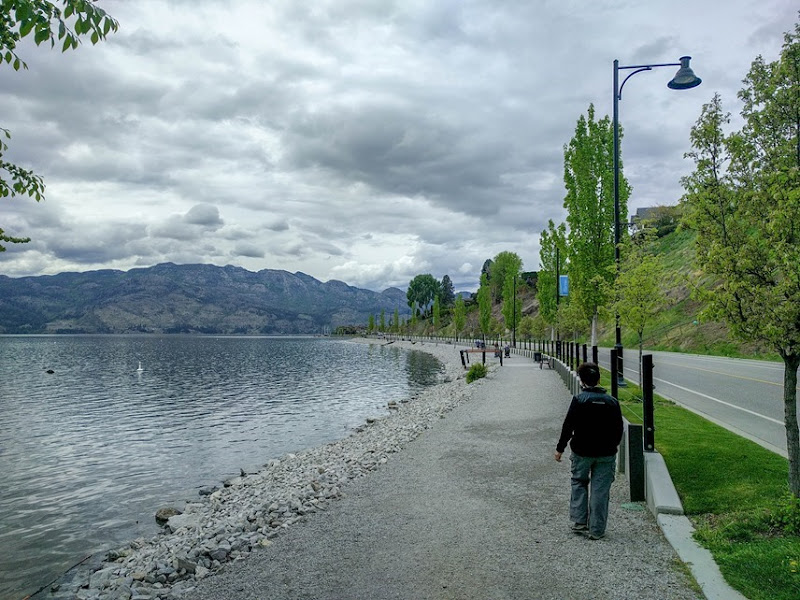 More big houses. This one was a B&B. 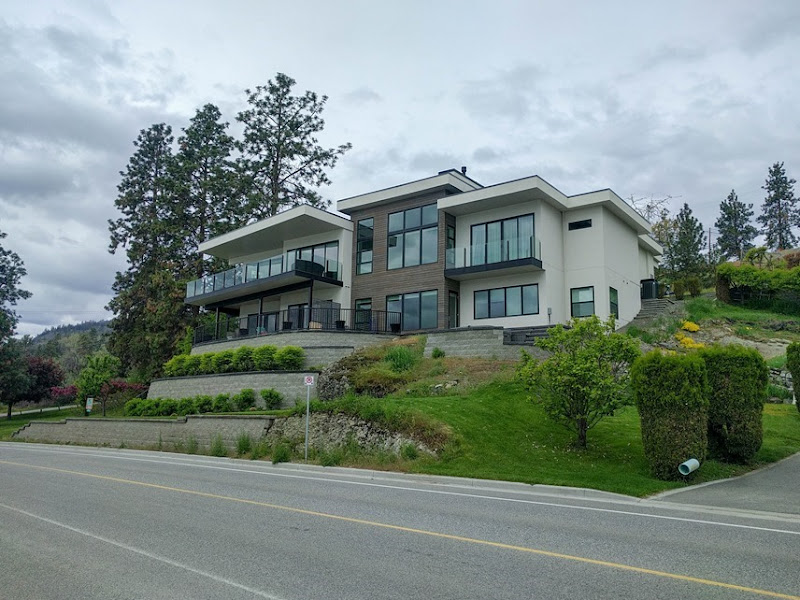 By now it was only 11:30 and we had not gotten any rain yet so we decided to press our luck and try another short trail.

The Kalamoir Regional Park is a thin strip of steep cliff next to the lake. 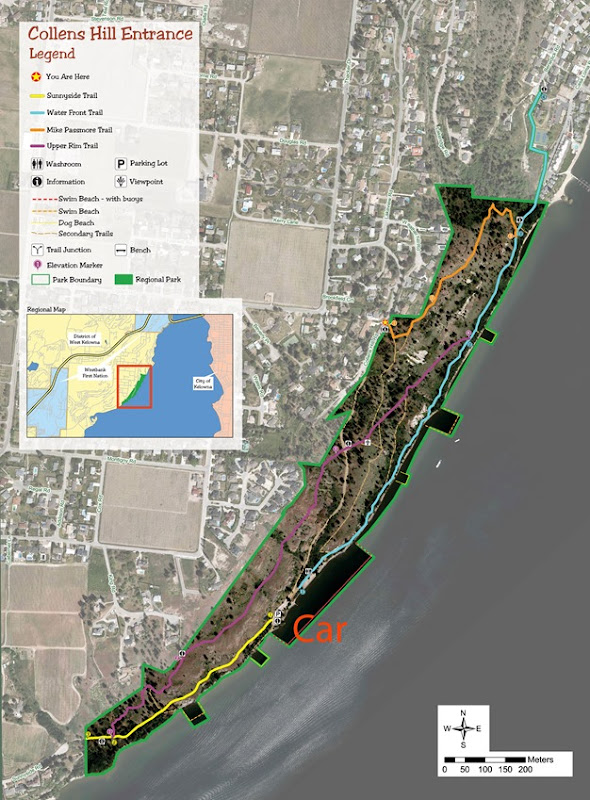 We took the yellow Sunnyside Trail, the purple Upper Rim Trail and then part of the Waterfront Trial to make a 2.5 km loop.

The Sunnyside Trail was mostly flat and just a bit up from the water. 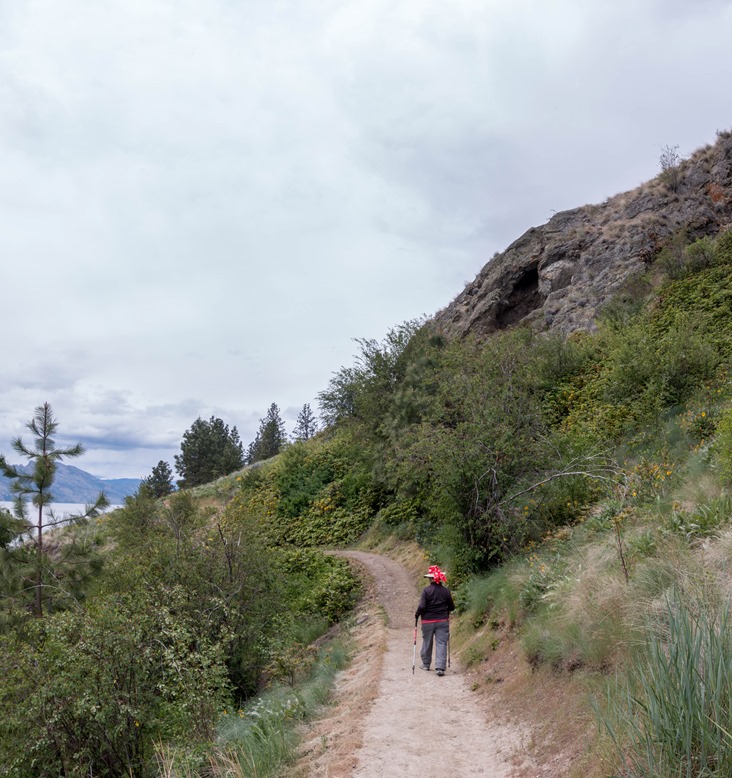 Still no rain on us but looking all around we could see rain behind all on the mountains ringing the lake. 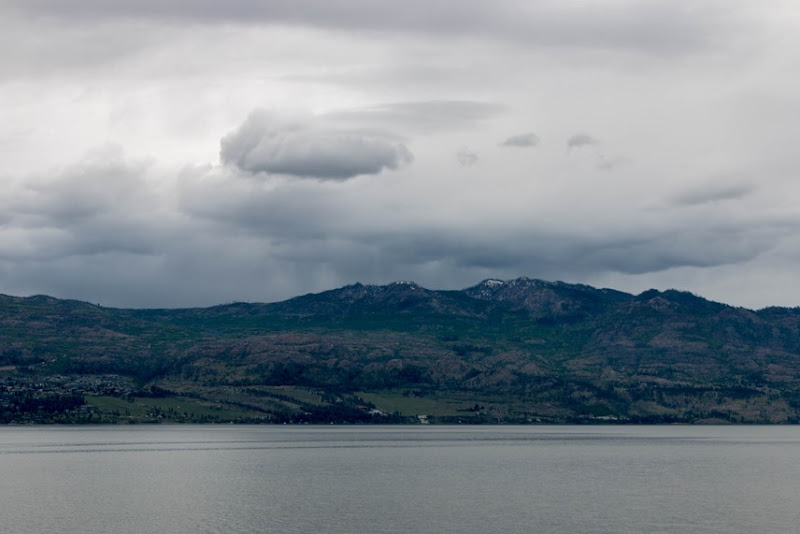 At first we thought that the orange stripe was part of the plant but then we saw one without so it must be a fungus. 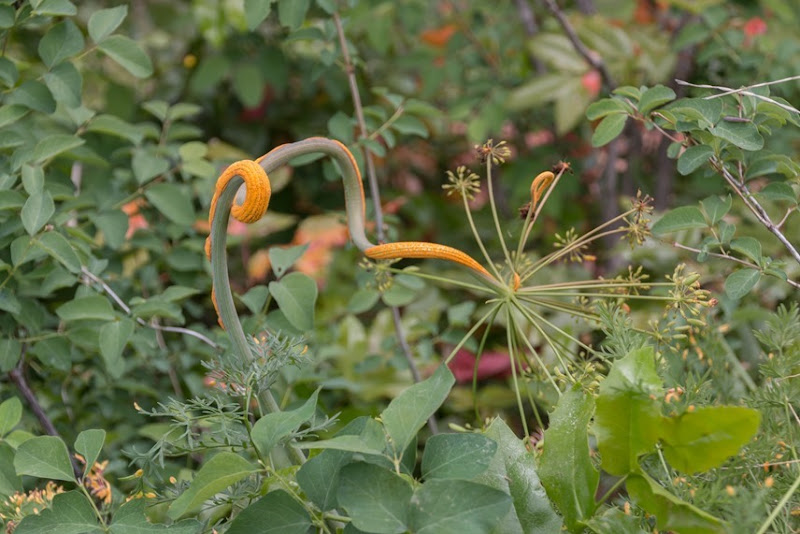 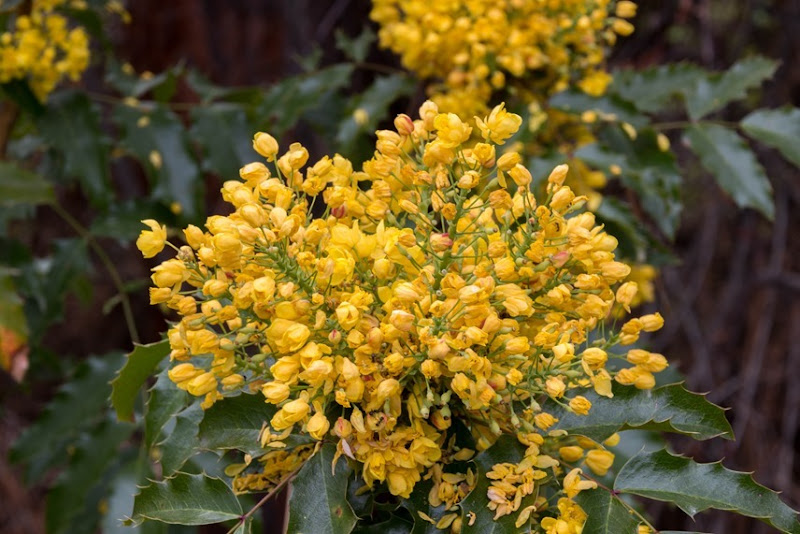 Turning back on the Upper Rim Trail, it was much higher up on the very steep slope. You can see the houses perched on top of the cliff. 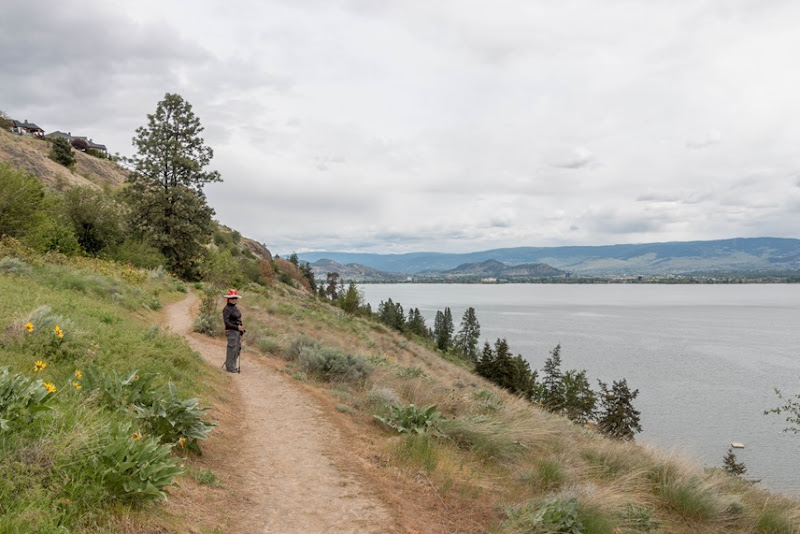 I have to have at least one photosphere a day.

There were a few patches of poison ivy to watch out for. 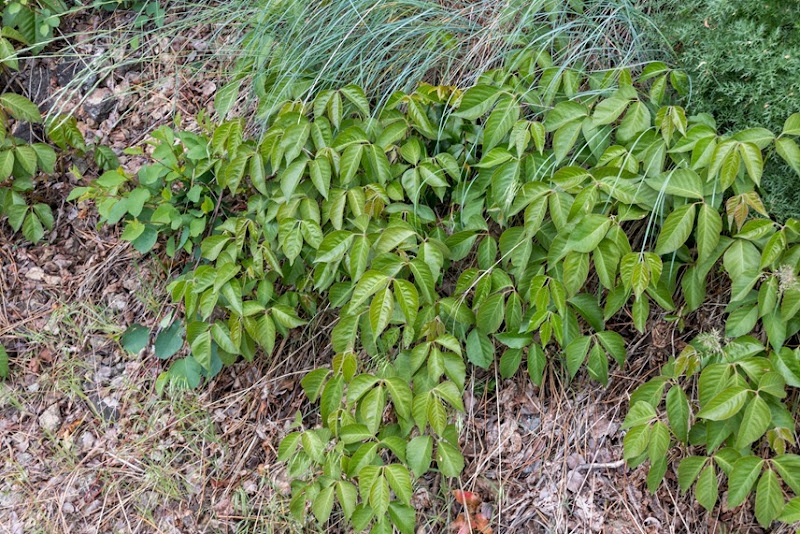 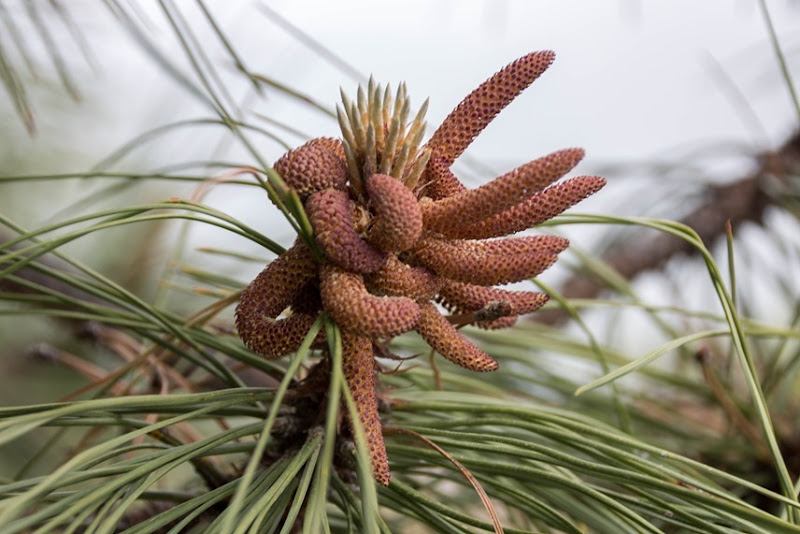 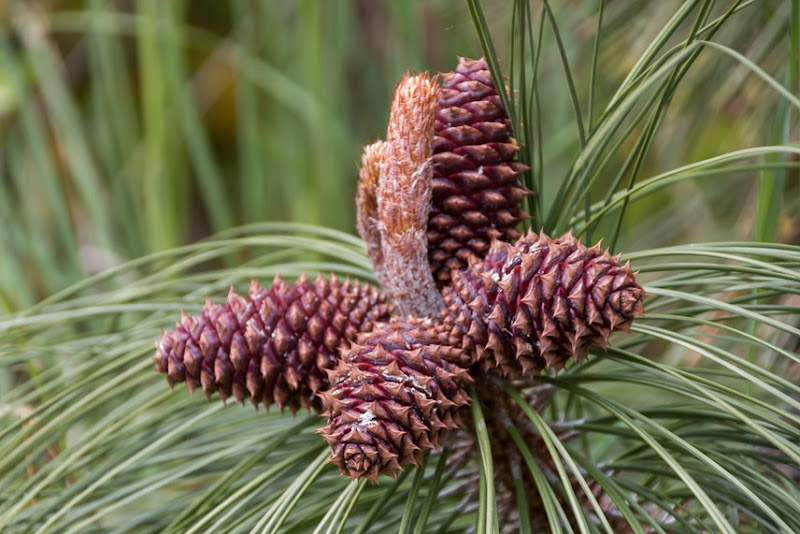 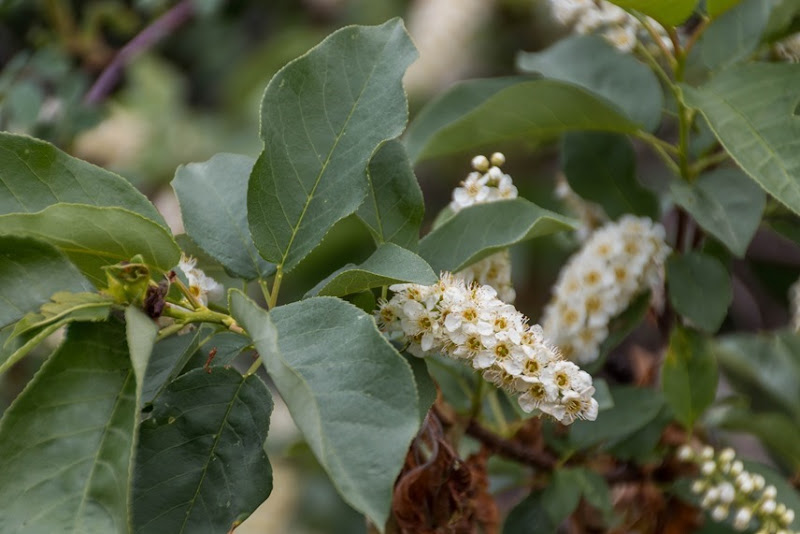 There were a some narrow sections with very steep drop-offs but in general it was not bad. 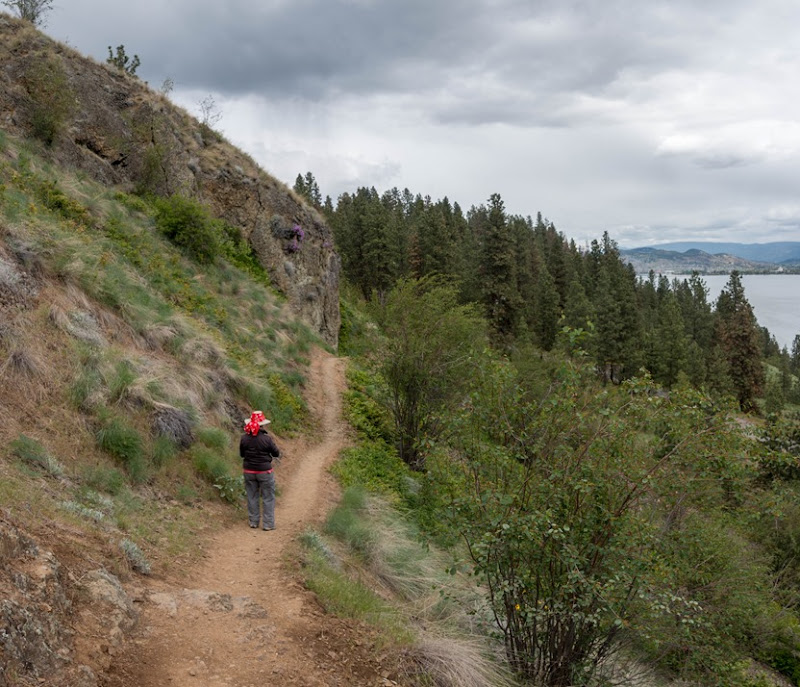 A nice purple bush cling to the rock face. 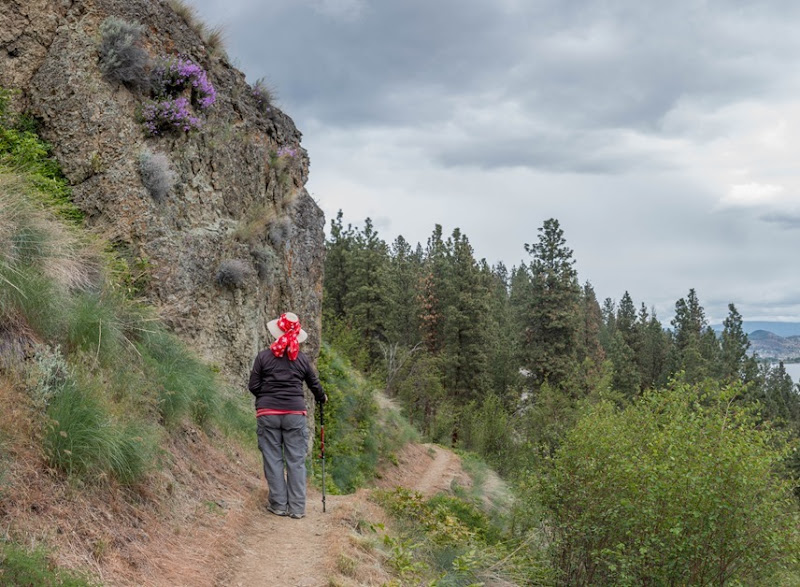 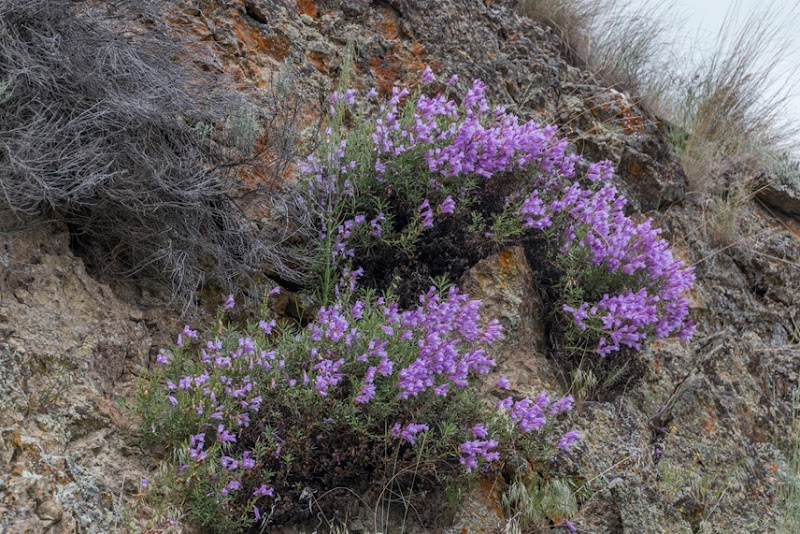 Heading back to the car on the Waterfront Trail we got down to the rocky beach. 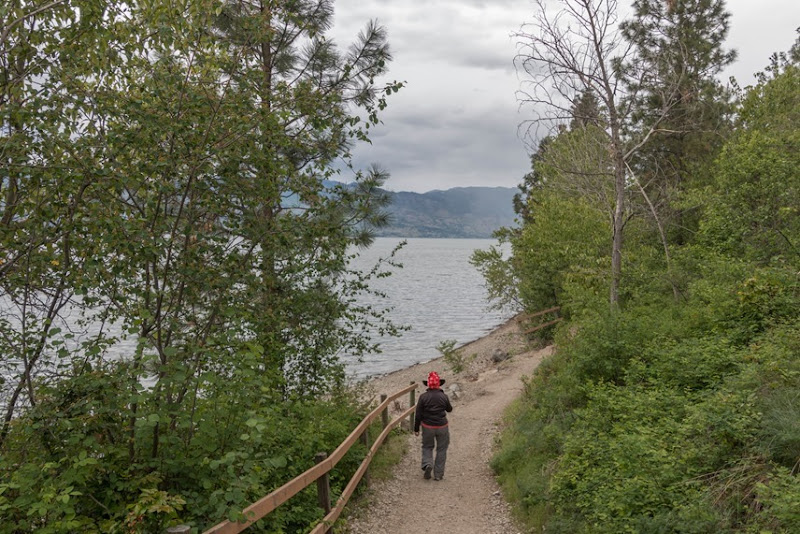 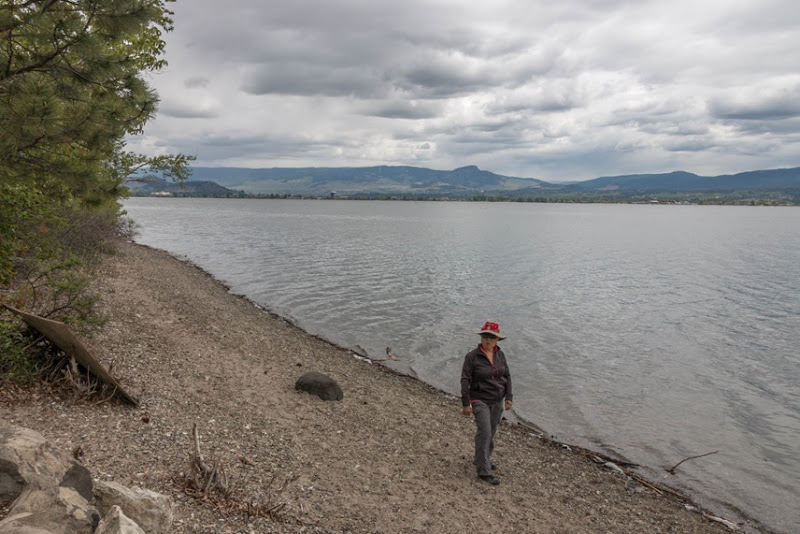 Looking south we could suddenly see that the rain was coming. 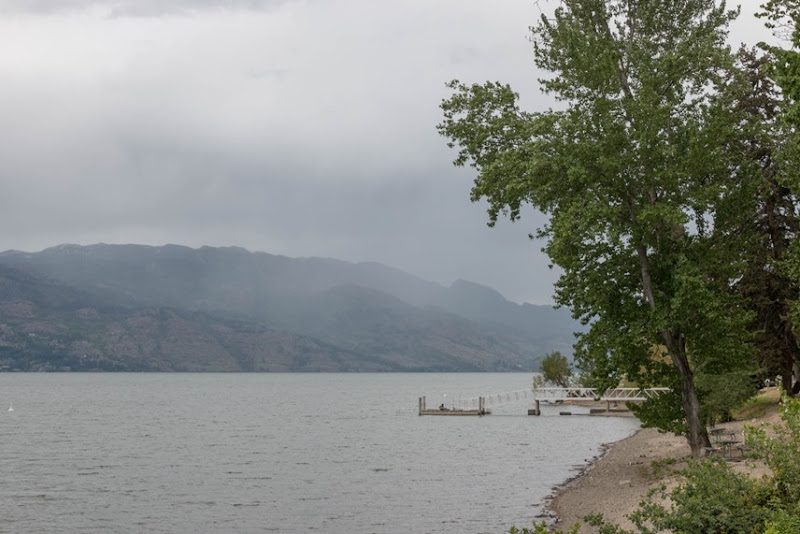 We got a few sprinkles in the last several 100 meters to the car but made it in time. Driving back, just up the hill, it seemed like they got a lot more as the roads and driveways seemed quite wet. Back in Kelowna we were back in the sunshine.

From the weather radar it did look like we were surrounded. 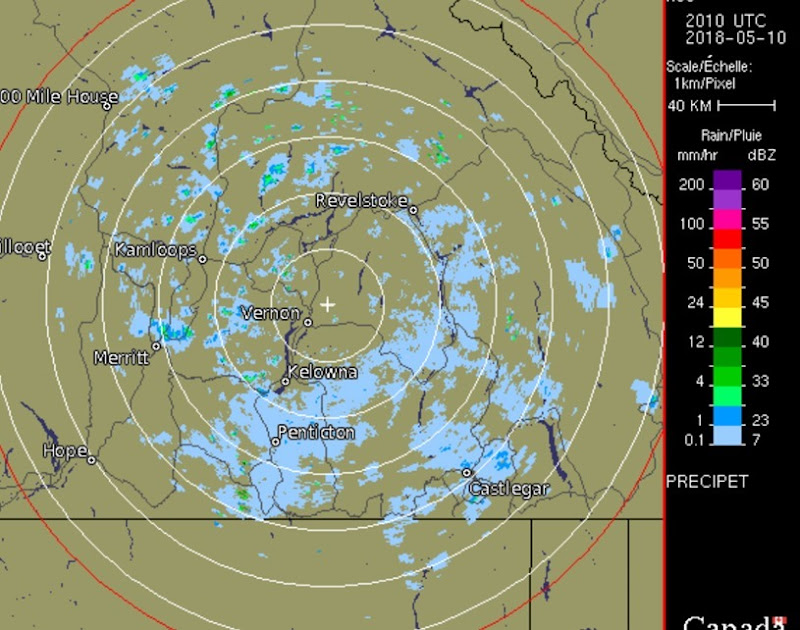 Currently it is late afternoon and we have not had rain back at the RV. It is supposed to be sunny again tomorrow.