The forecast today called for the possibility of afternoon thunderstorms so we just did a short hike at nearby Knox Mountain Park. It made for a kind of grey day. After we got back home it got sunny. Oh well, you can’t time everything perfectly.

The park is another extinct volcano located right next to downtown Kelowna. 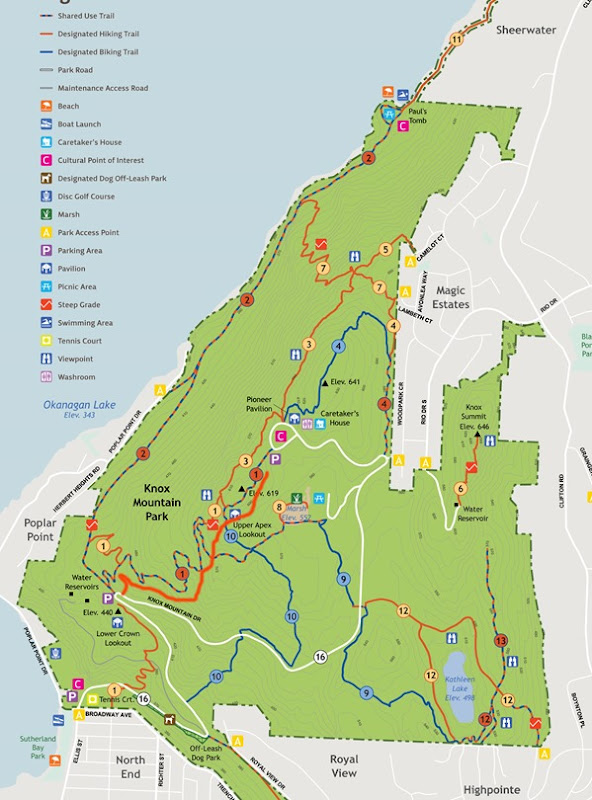 We did part of the Apex Trail (#1 in the map). It starts from the bottom but we cheated a bit and started part way up at the Lower Crown Lookout parking lot. Our return trip was not even 3 km and about 170 m in elevation gain. 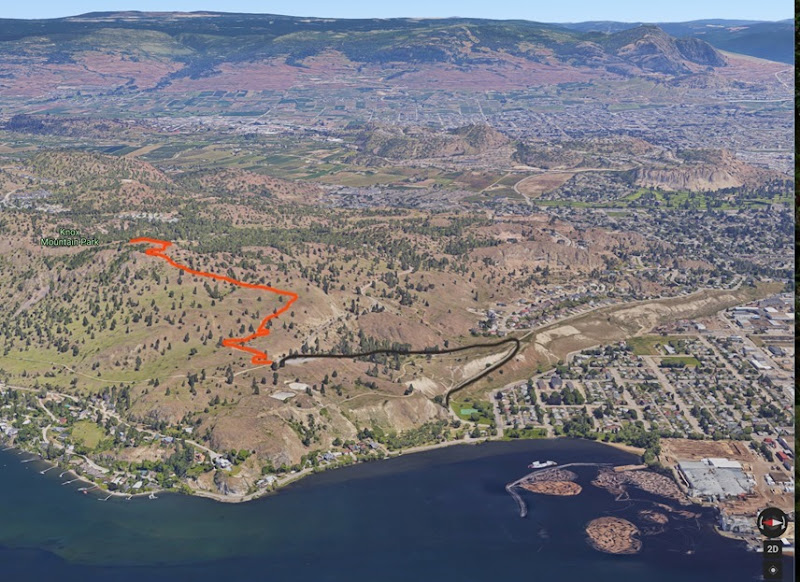 From the Google Earth view you can see that the trail winds it way up one side of the mountain. We had a nice view down to Kelowna but it was pretty much always the same view.

From the parking lot.

There is a large sawmill just next to the downtown area.

We could see the little boats moving the logs around. 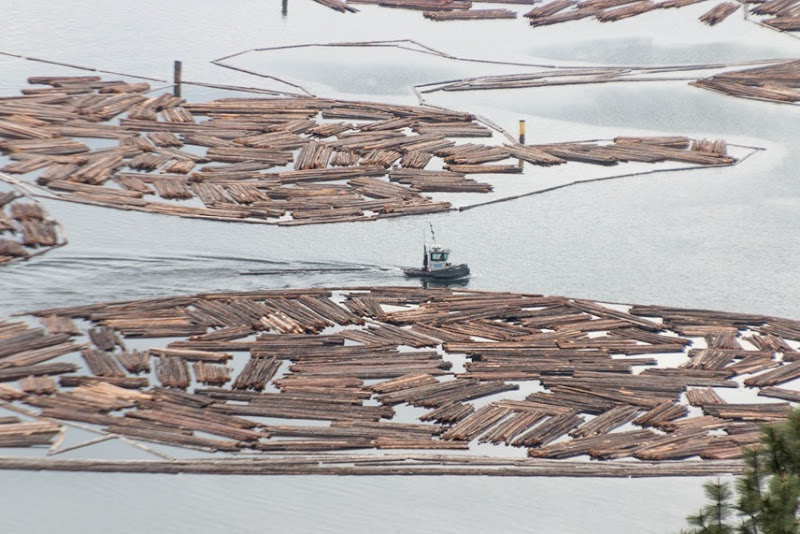 The trail zigzags its way up he hill. 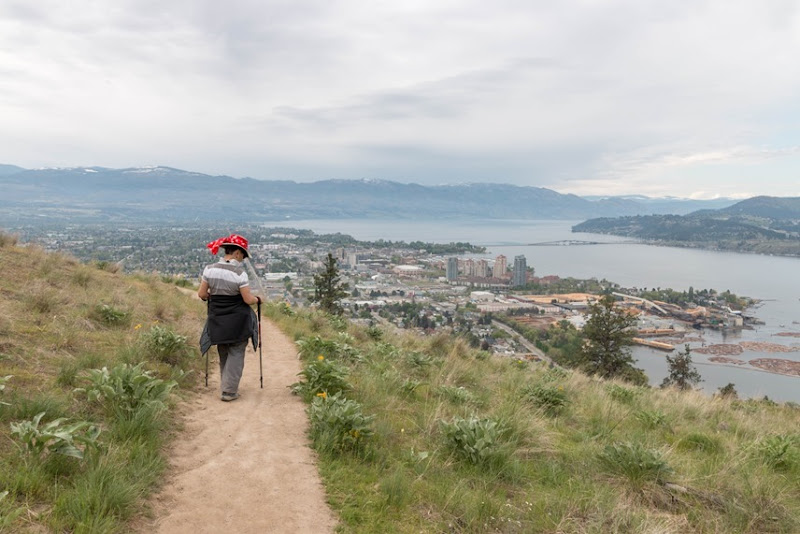 A photosphere from higher up.

Lots more of the Balsamroot but many looked like they have had their flowers picked. 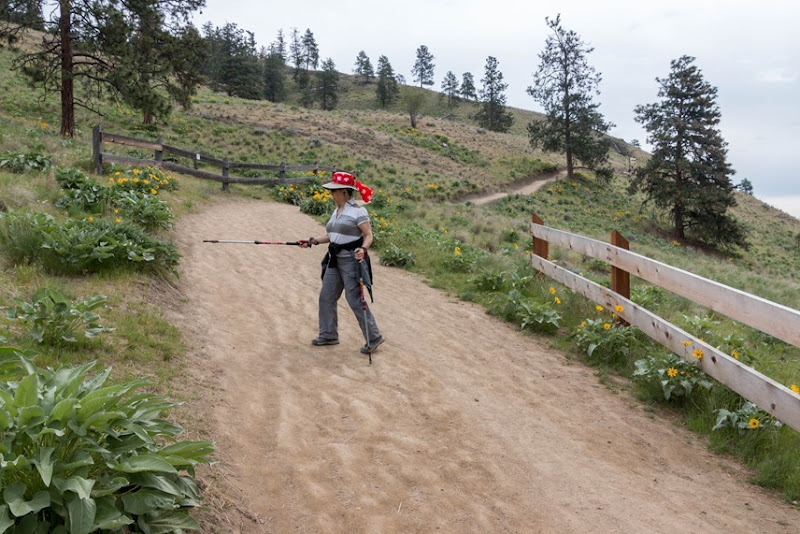 For one short section they seemed to be covered in ticks. It was kind of weird because it was only the plants in a small area but the trail is wide enough to easily avoid touching them. We checked ourselves carefully afterwards. The ticks were large enough that I think they were wood ticks, which are not as bad as the deer ticks. 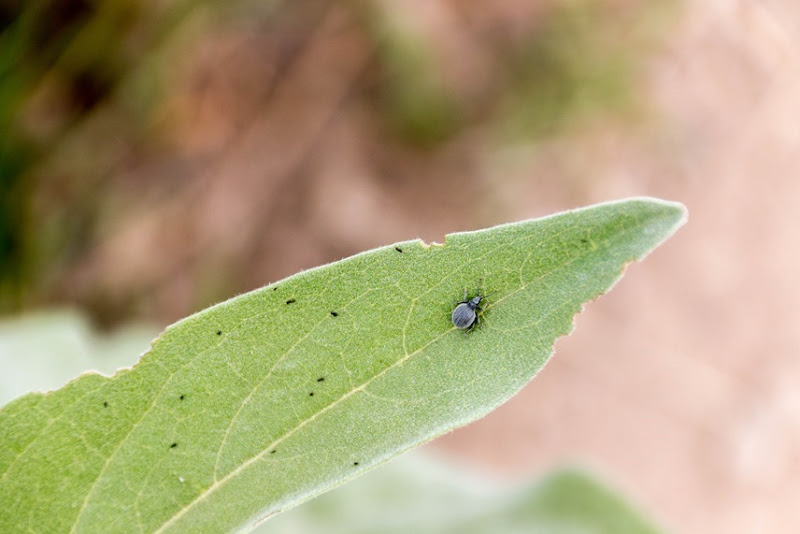 A short section of about 90 steps. 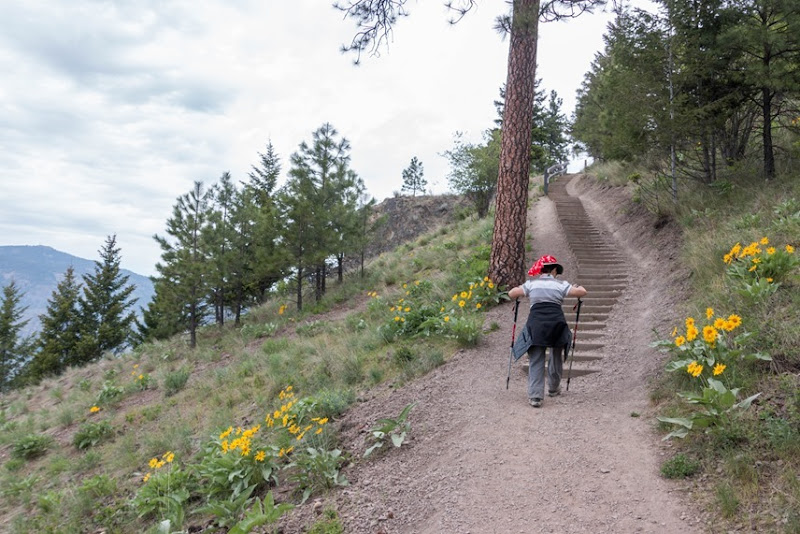 At the top of the steps there was a lookout where we could see Bear Creek Park across the lake. 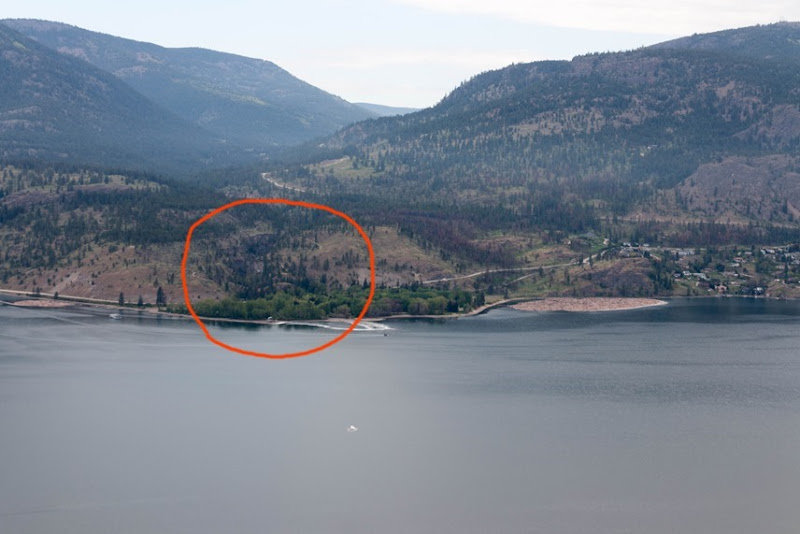 A photosphere with the view up and down the lake.

The pavilion at the top is in sight. 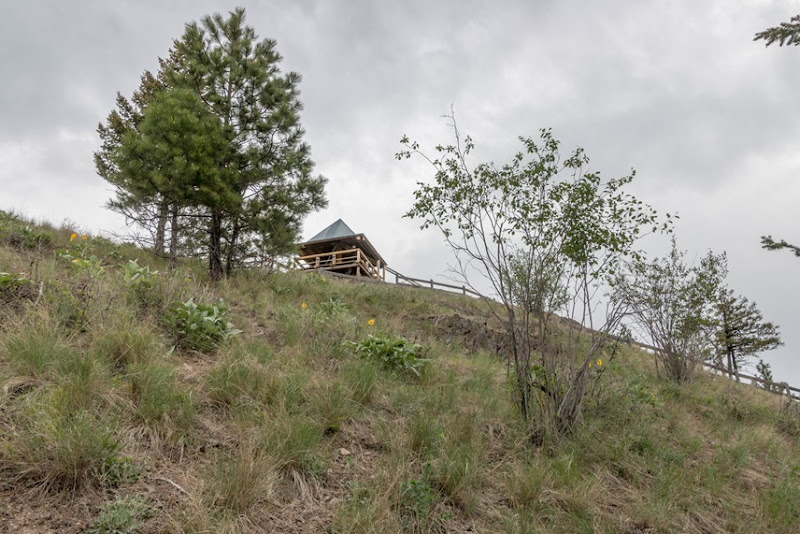 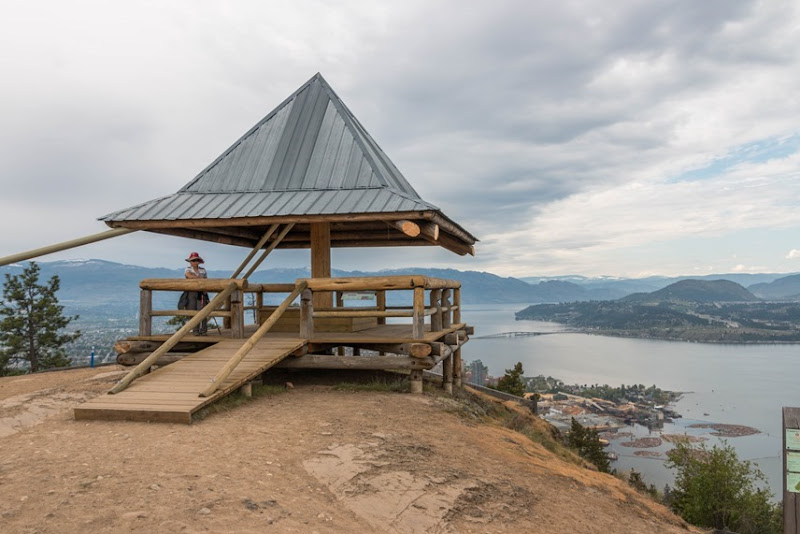 We walked a short way along the top until we could see to the north again.

Then we went back to the pavilion to have lunch. 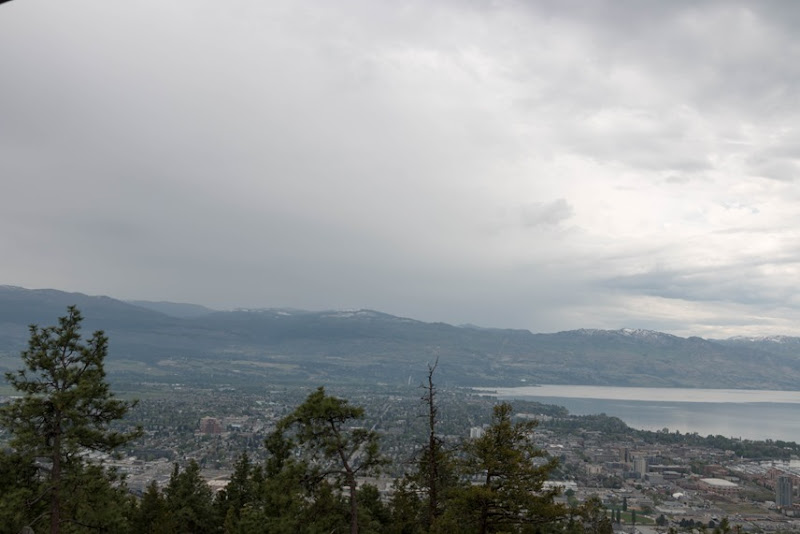 Checking the radar map later, it did pass just south of us. 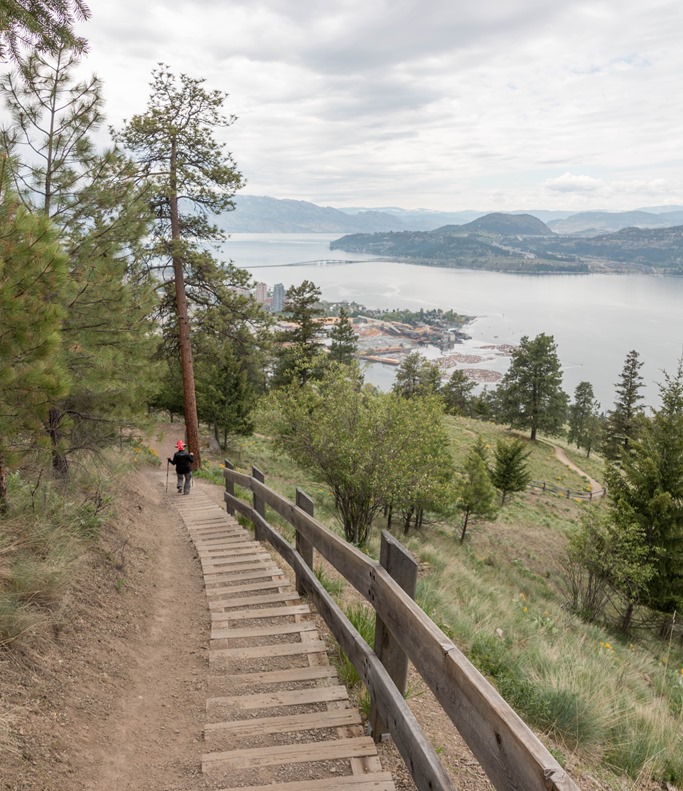 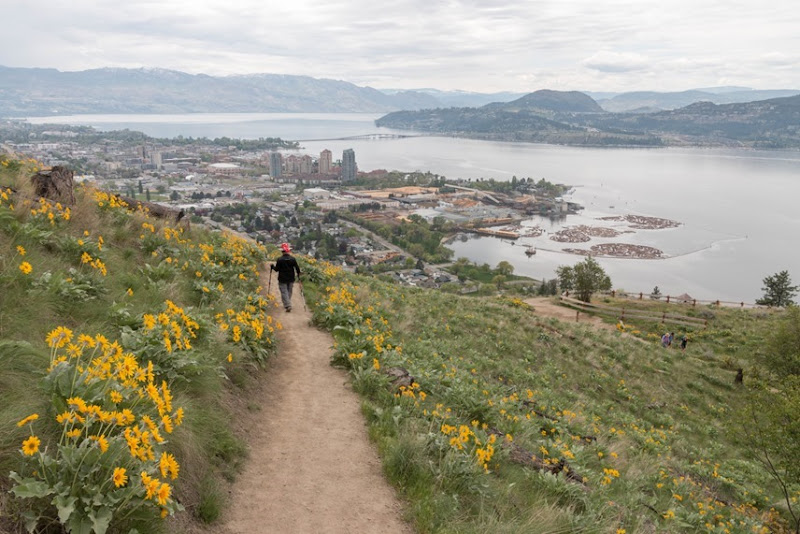 It was such a short outing that we had a lot of the day left. It still was pretty grey out so we had little enthusiasm about going somewhere else. We just did some shopping before going home.