As a side note, I have been booking ahead some of the campsites as I am worried they will be full in the summer. I called one around Crater Lake National Park. I got a recorded message that said that the park was not yet open as it is still snowed in. They think it will be another 2 weeks before they can even get to the park to clean up and open it but they called back and I got my reservation for early July. The official Crater lake web site says all the hiking trails are closed as they are still buried under 8 feet of snow. In a usual winter they get 44 feet.

Today we went up the coast to the Cape Perpetua Scenic Area run by the National Forest Service. They do an excellent job preserving, educating, making nature accessible and maintaining its properties.  This is a beautiful park with paved walkways to the beach area that is full of tide pools and sea creatures.  There are 11 marked trail to venture on, each with its own attractions, like flora, fauna, wildlife, geological formations, water features and creatures.

We spent the whole morning clambering along the jagged edges of the lava rock shores waiting for the waves to crash and spray.  The waters are too calm today for “Spouting Horn” to perform.  There were numerous other carved overhangs and long jutting formations funneling water up channels.  It was quite the adrenaline rush traversing Cook’s Chasm, Good Fortune Cove, the toilet bowl. 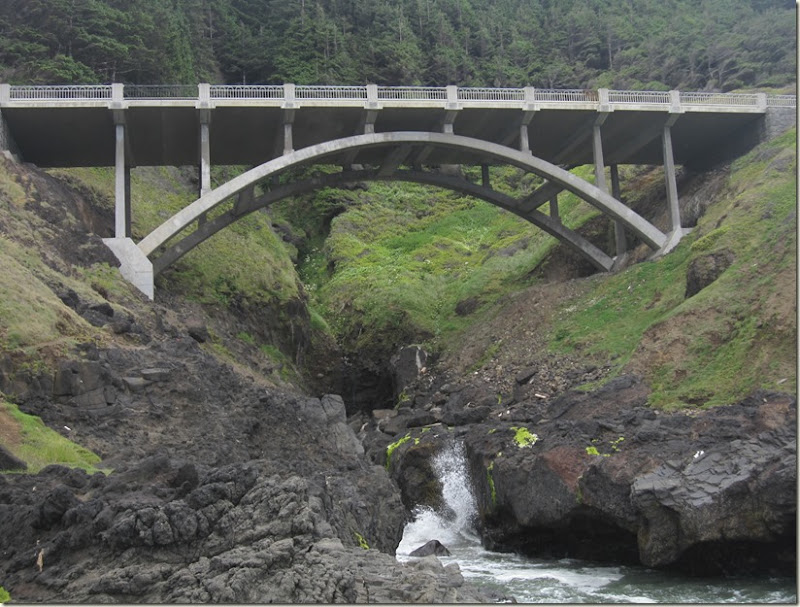 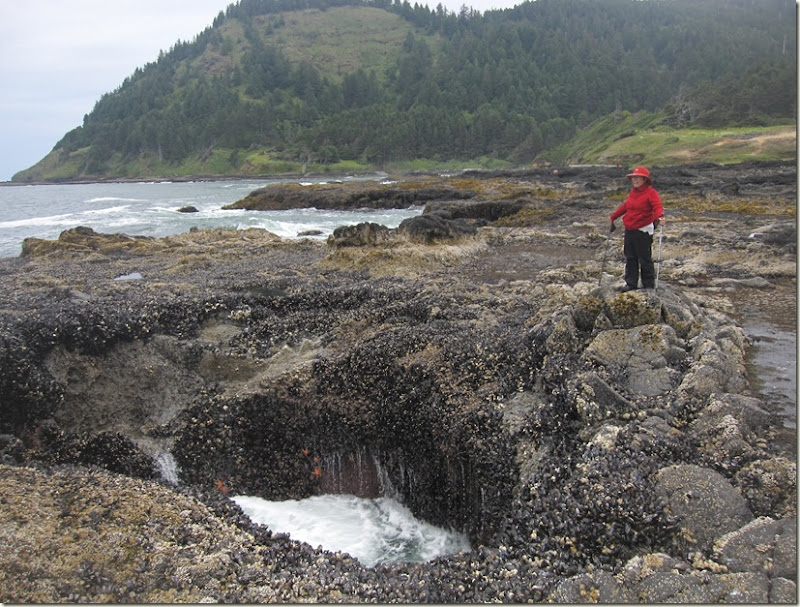 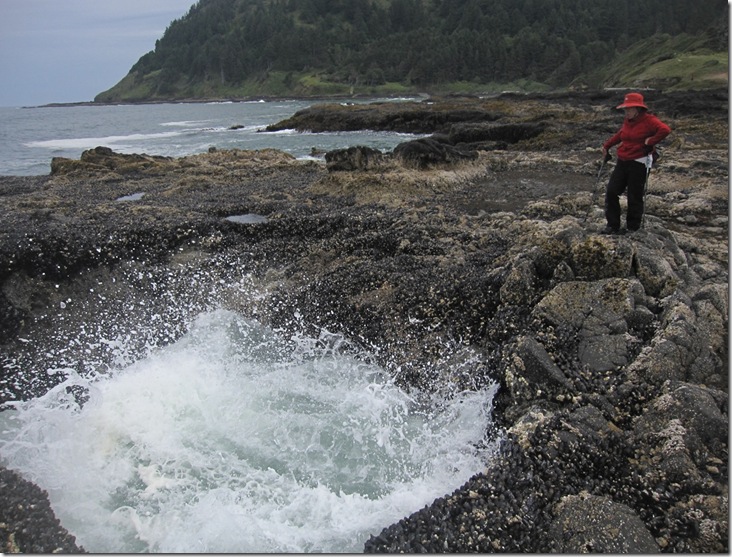 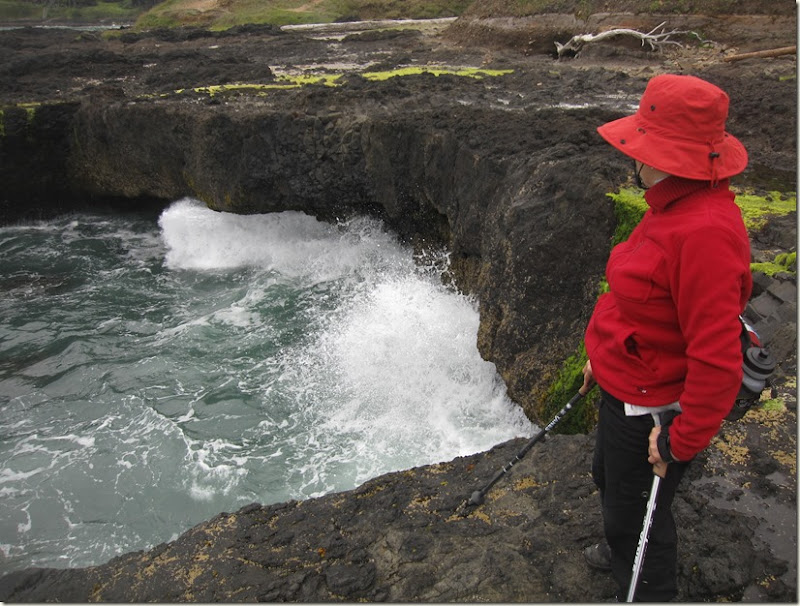 If you are careful to pick a dry spot with no mussels, etc. you can get quite close to the spray without getting wet but there were a few near misses with the large ones. 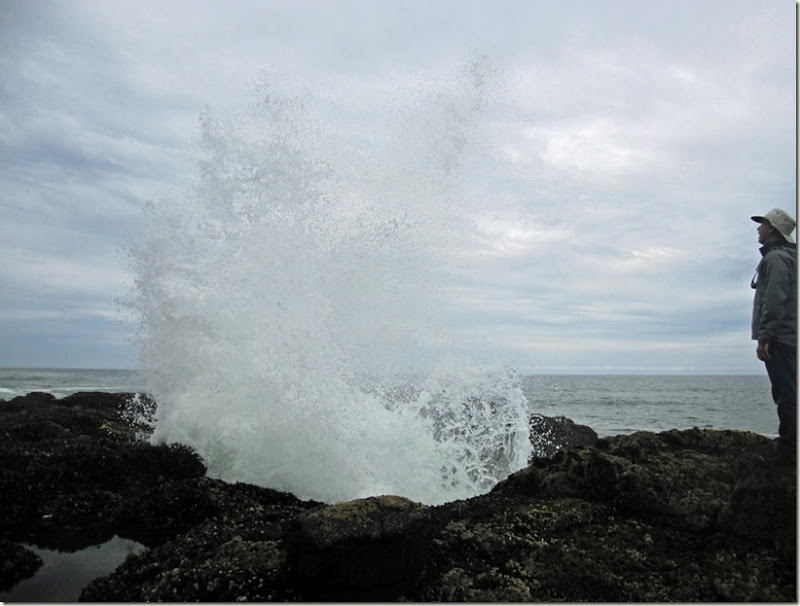 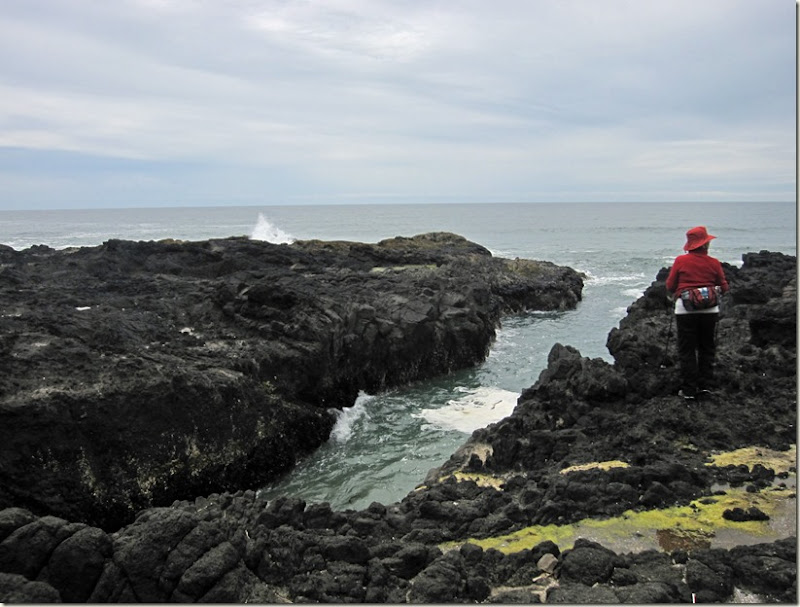 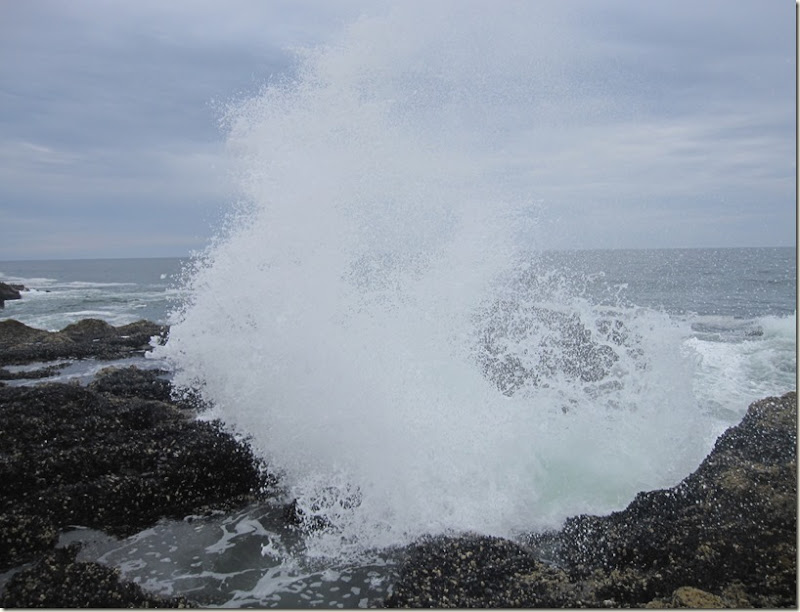 There was a nice paved 1/3 mile trail up on the cliff to the other end of the park to another feature called Devil’s Churn. But did we take that. Not To get around this bay we had edge along the left side in the picture and then jump down about 6 feet into the stream.a chance. We took the shore route climbing over the lava.

To get around this bay we had edge along the left side in the picture and then jump down about 6 feet into the stream. 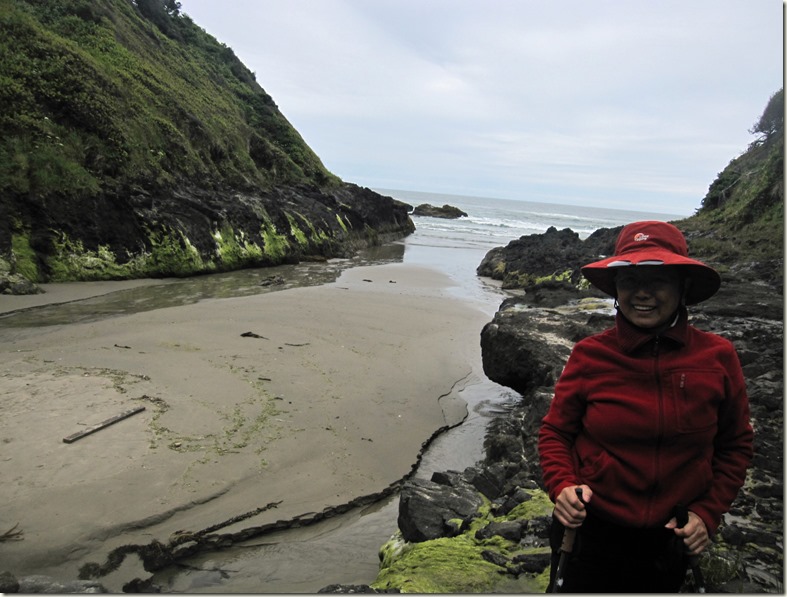 This trench was fun. About 5 feet deep and about 2 feet wide at the non covered in seaweed part. The only way across was to jump. 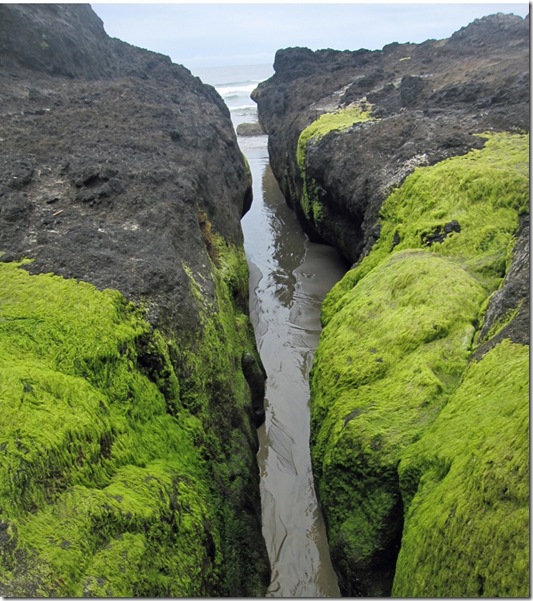 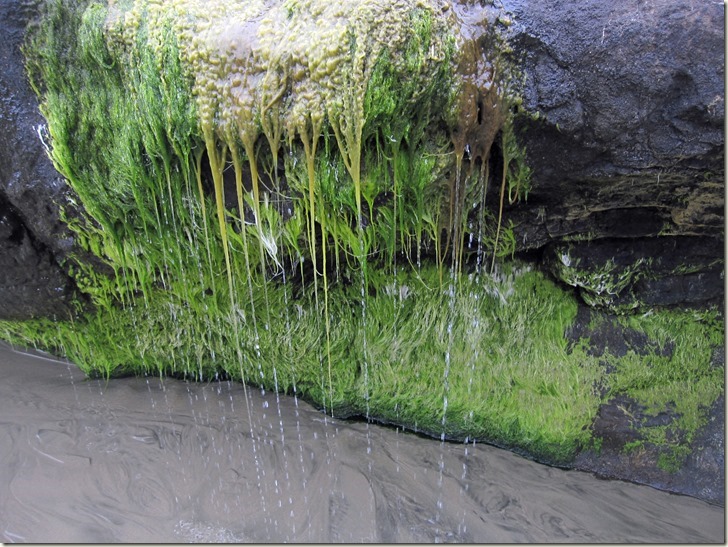 The down and across a wide, flat beach. 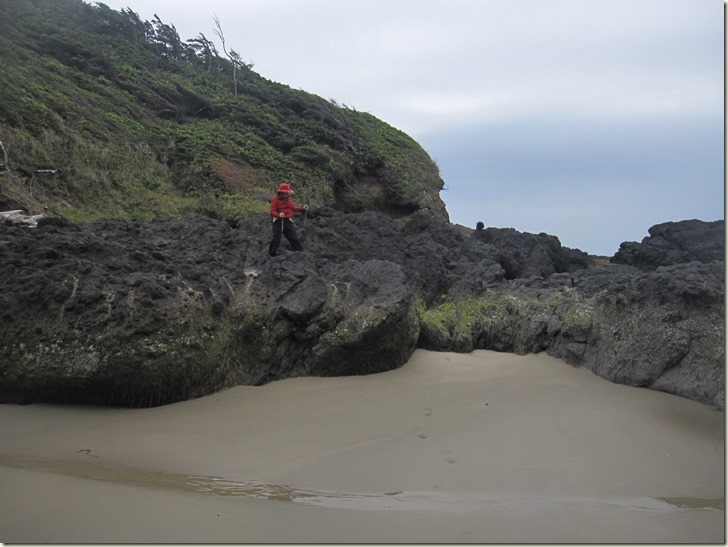 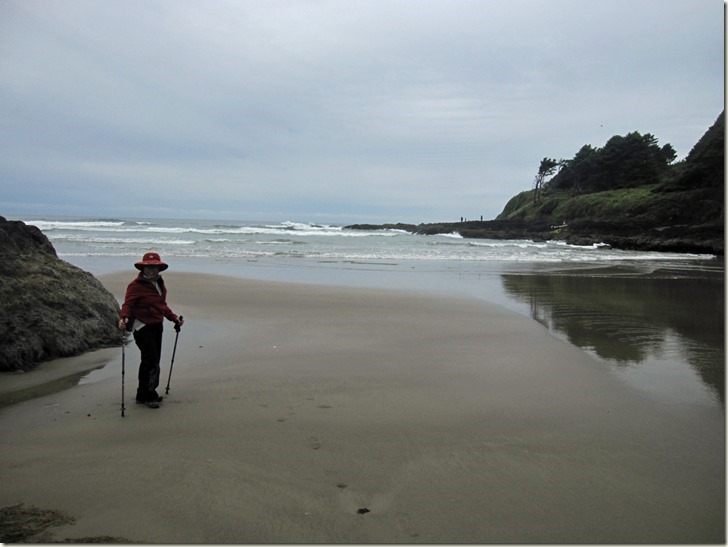 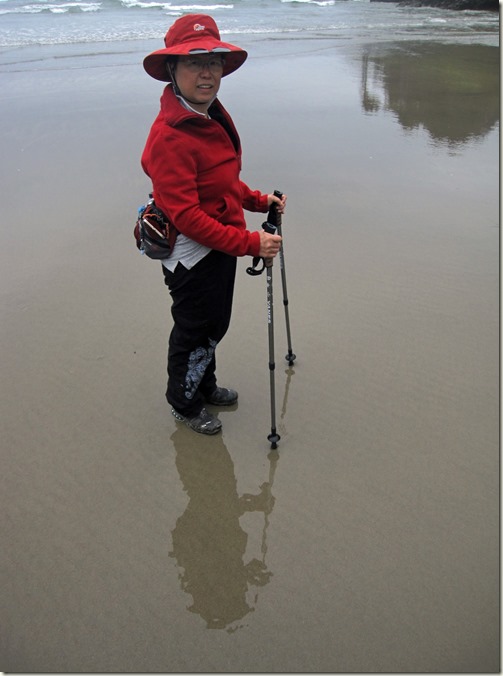 All in all it took us a little more than an hour to travel what looked like a short distance when looking back but we felt we had accomplished something. We came from just beyond the point sticking farthest out in the distance, in the picture below. 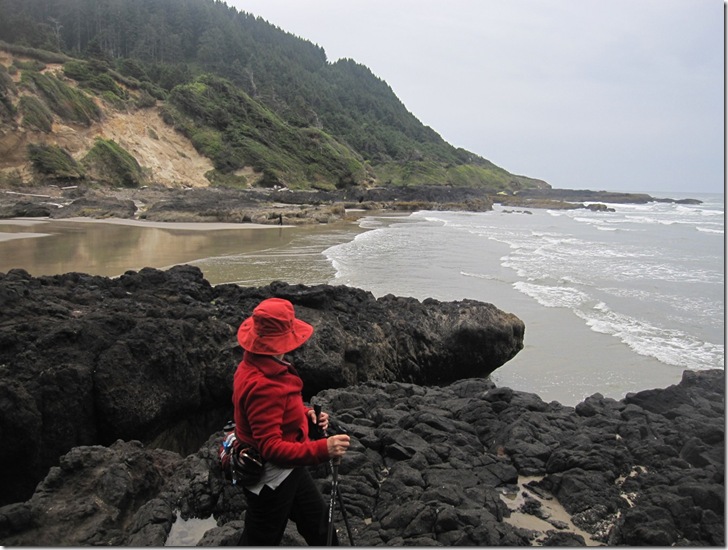 It turned out the Devil’s Churn was a long deep trench. You had to climb up and over a point to get to it. 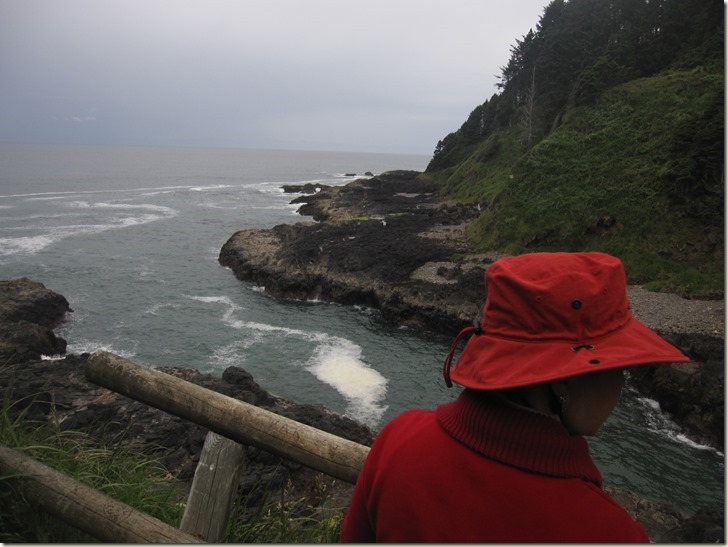 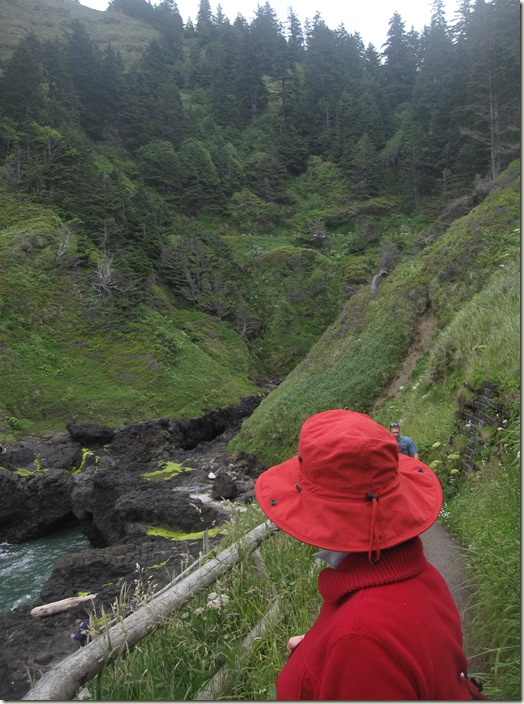 It wasn’t doing much today. In stormy weather it is supposedly fantastic with 20 foot high plumes of water blasting out of it. Oh well. 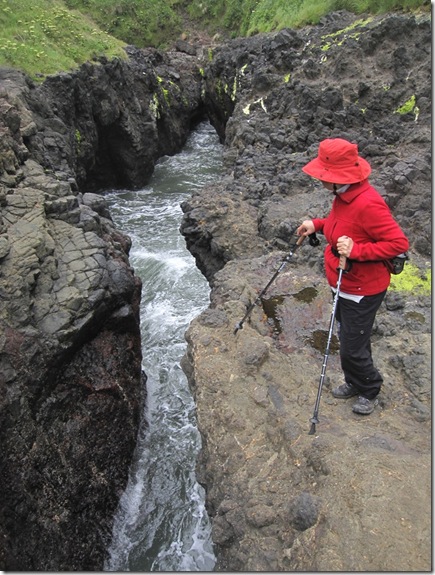 We took the high road back. 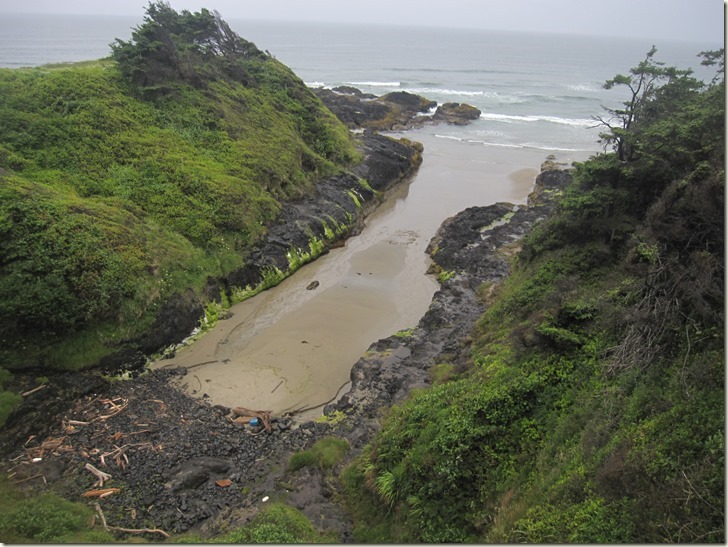 It started to rain on the way to the Visitor’s Center so we went in to make some notes on the vegetation found on the trail and watch a video on the tide pools. It was tough not to fall asleep in the comfy chairs.

The rain got heavier so we headed home.