The main road inside Yellowstone is called the Grand Loop Road and is like a squared off 8 with feeder roads coming from the sides.

Today we did the north part of the 8. We started at the Norris Area, went north to Mammoth, east to Tower-Roosevelt, south to Canyon, west back to Norris and home. We stopped at just about every viewpoint and turnoff. Some good, some boring. 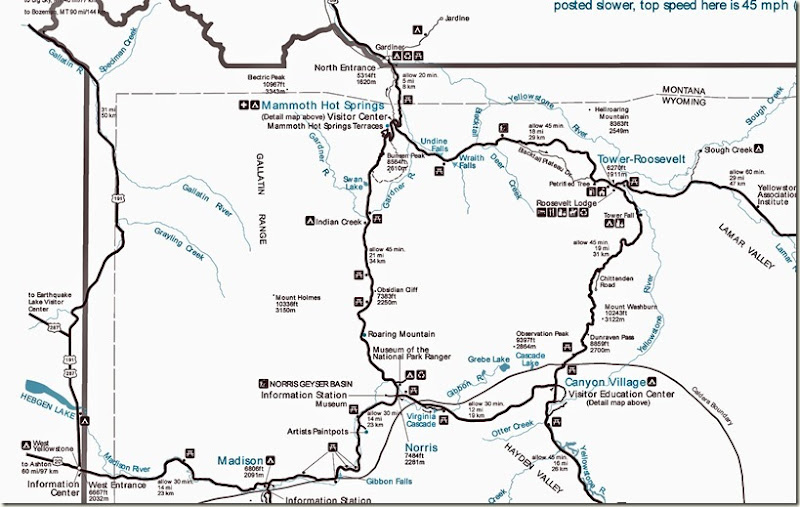 First stop. Gotta have at least one picture of a colourful hot spring. 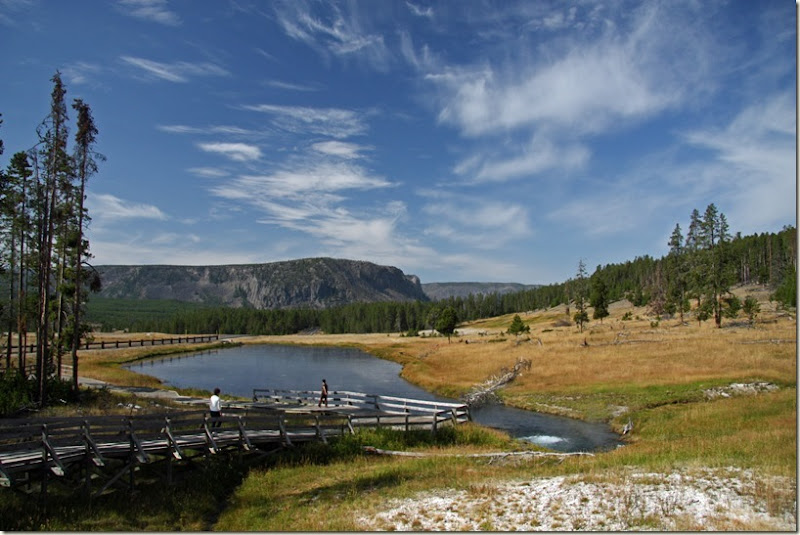 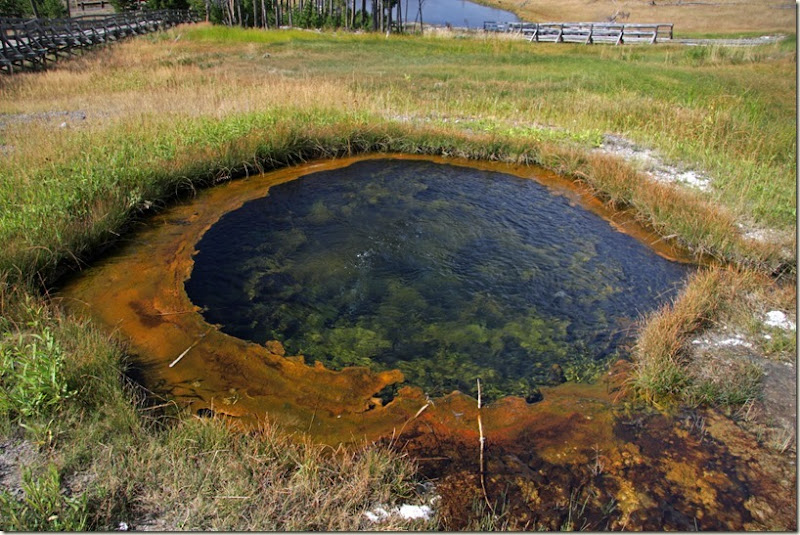 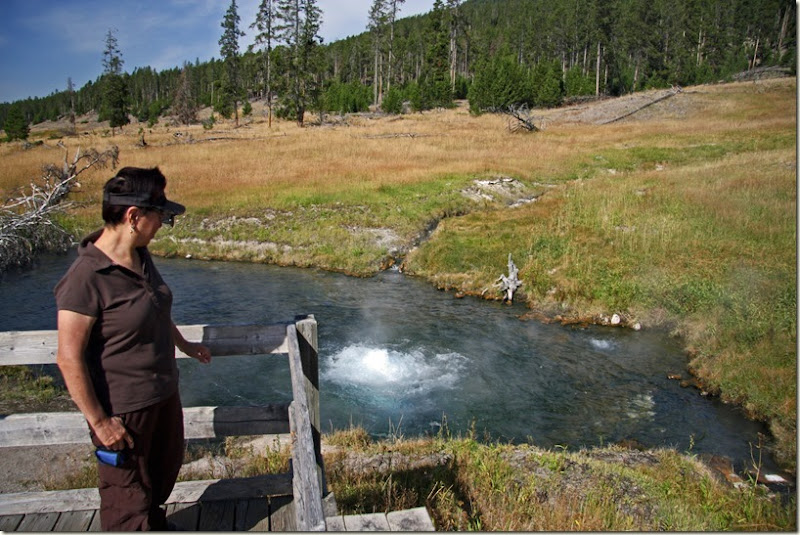 Another quick stop at a road side waterfall. 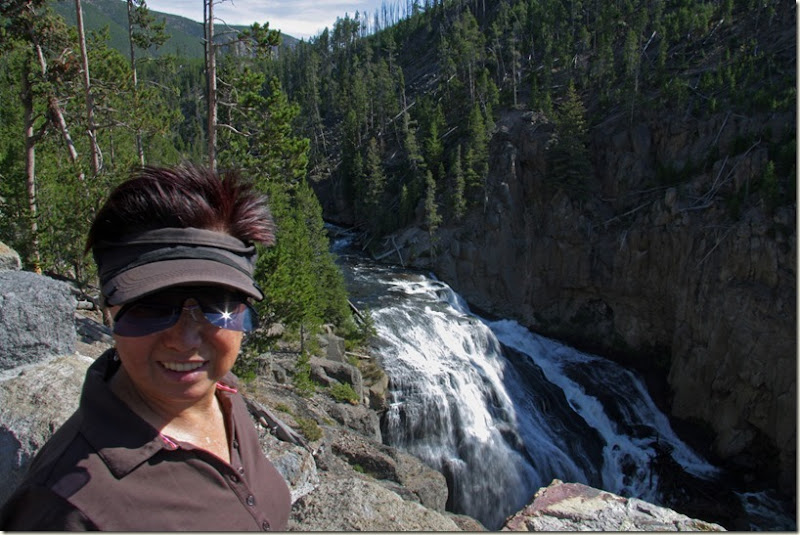 This stop was called Roaring Mountain because of all the steam vents. It was kind of whispering today. There was also not a lot of steam because it was quite warm by the time we got there (we slept in a bit). 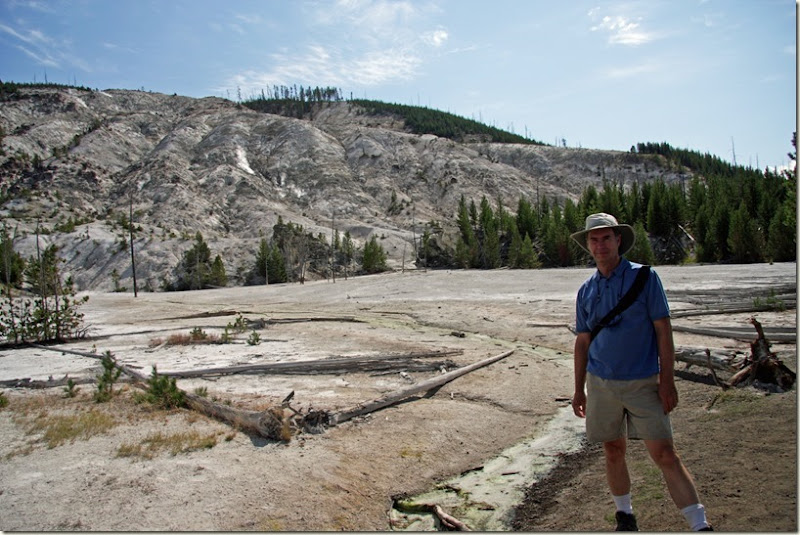 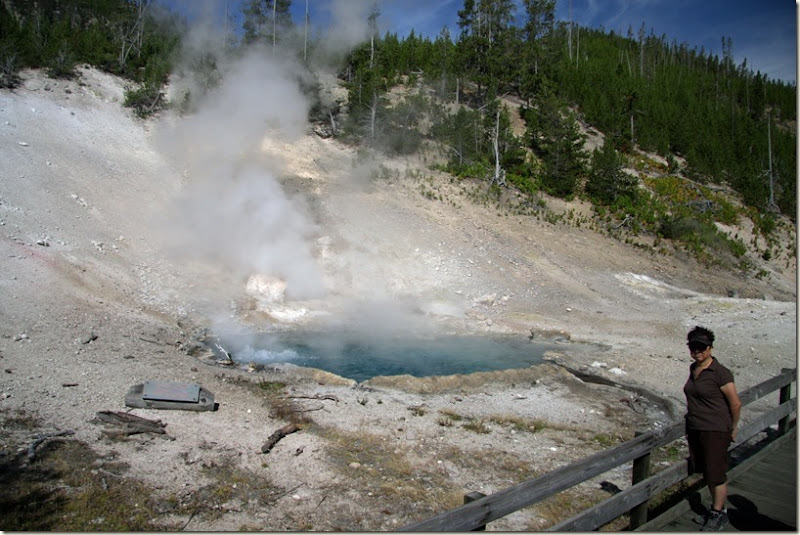 We drove across a wide high plateau with mountains to the west. 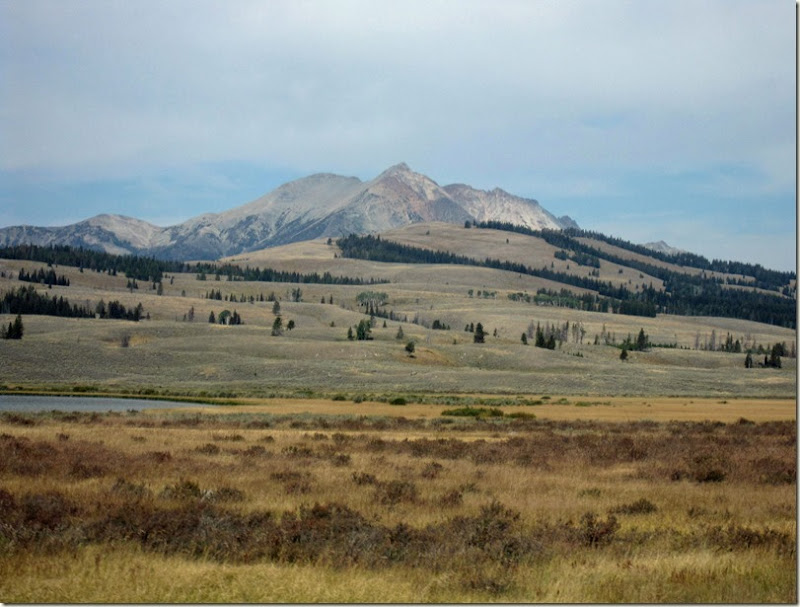 As you drop down to the Mammoth area you follow this river gorge. 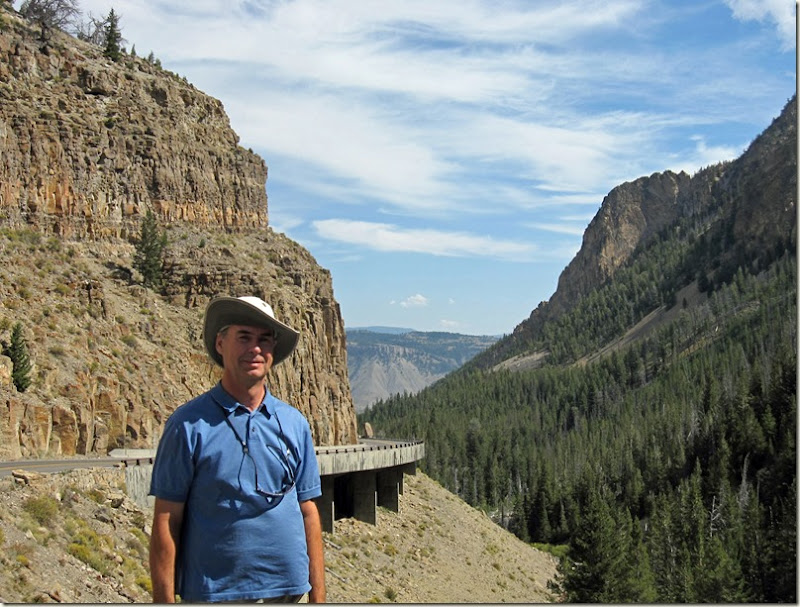 We always love the waterfalls. 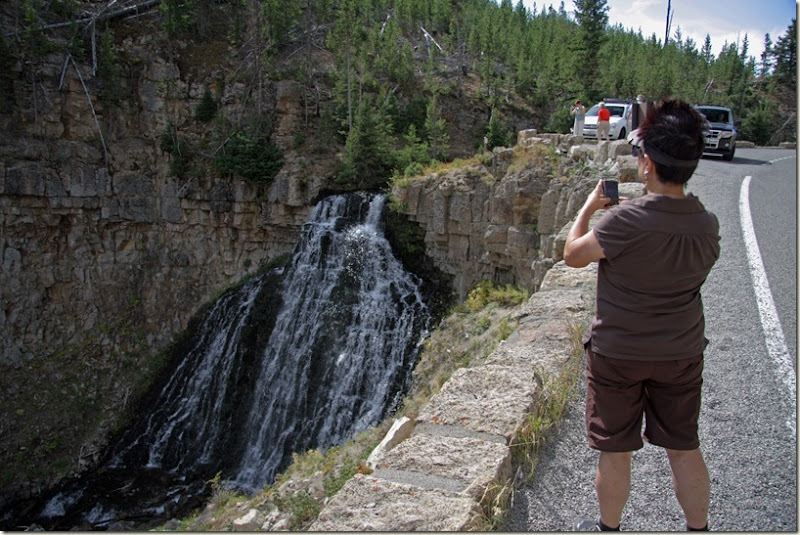 Part way down we drove through this jumble of huge shattered rocks. 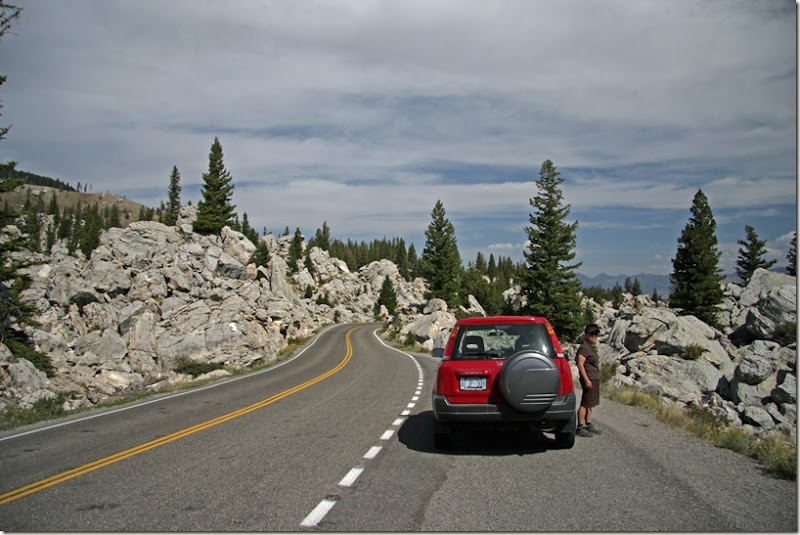 There was a little single lane loop road that we drove through after walking around it a bit. 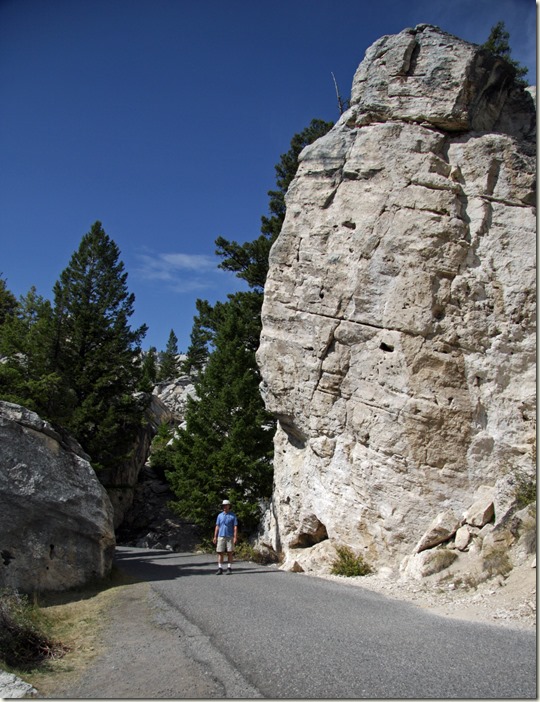 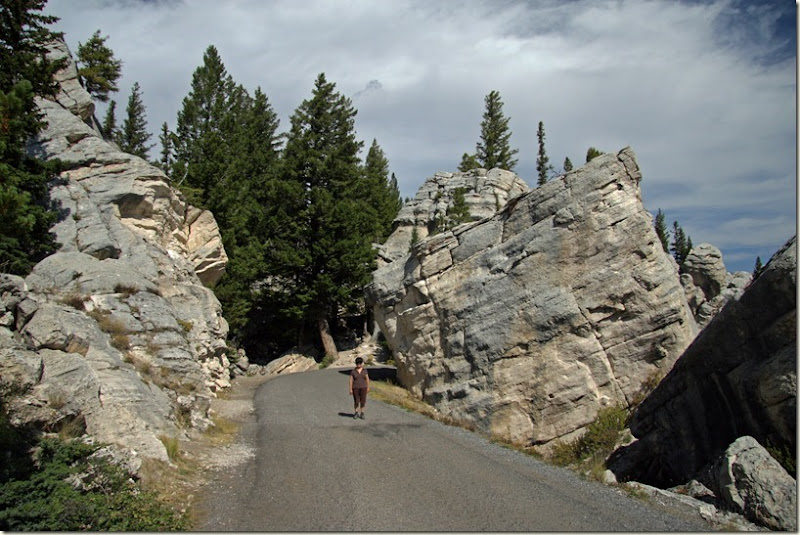 We couldn’t resist another peek at the Mammoth Hot Springs. 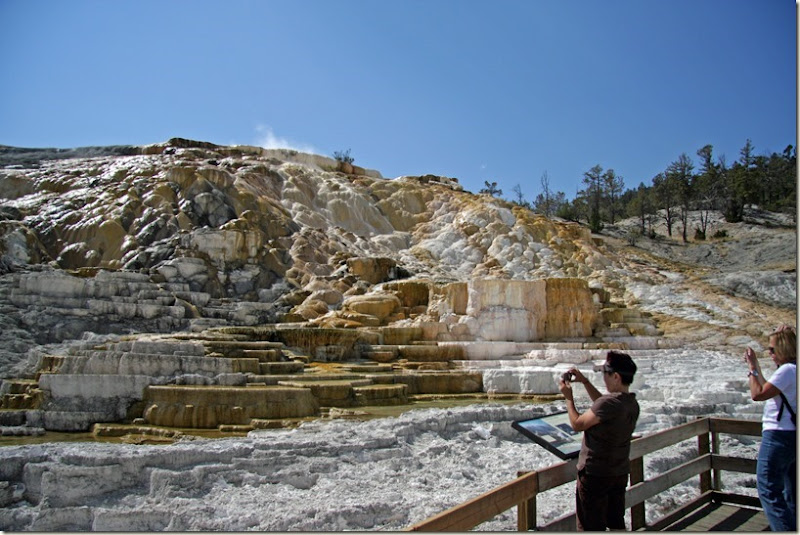 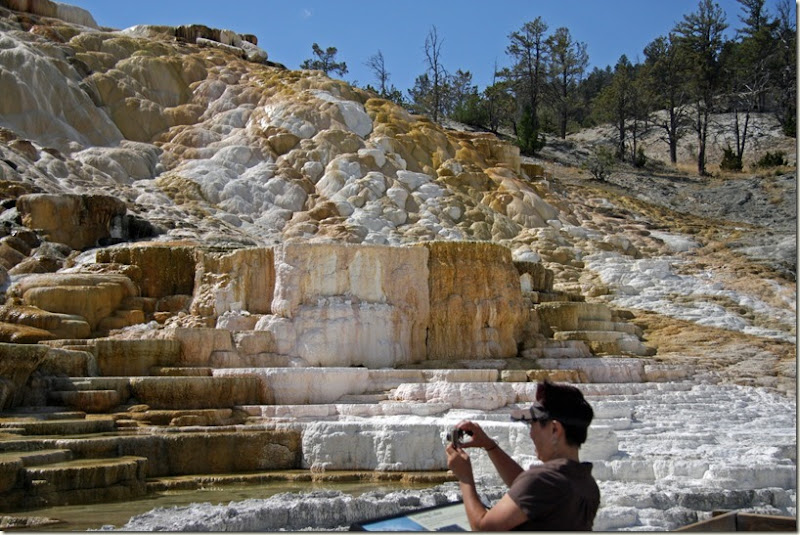 Turning east you drive next to this massive cliff for a while. 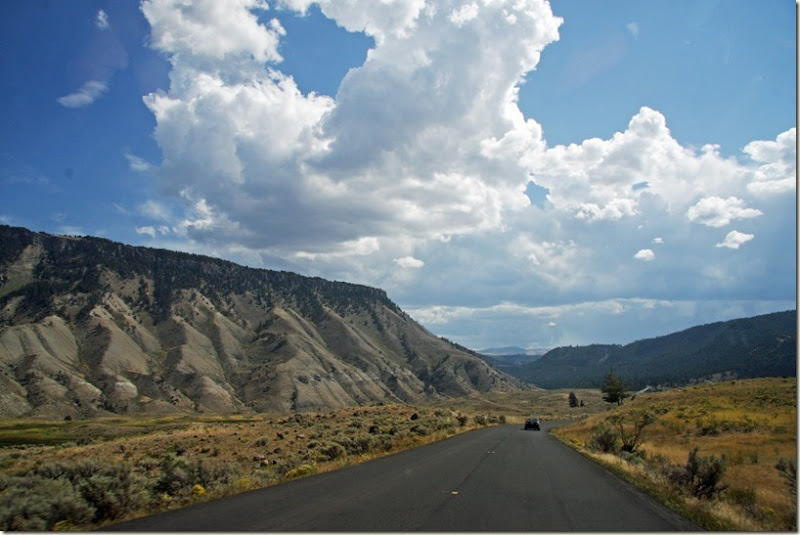 We stopped for lunch at Undine Falls. 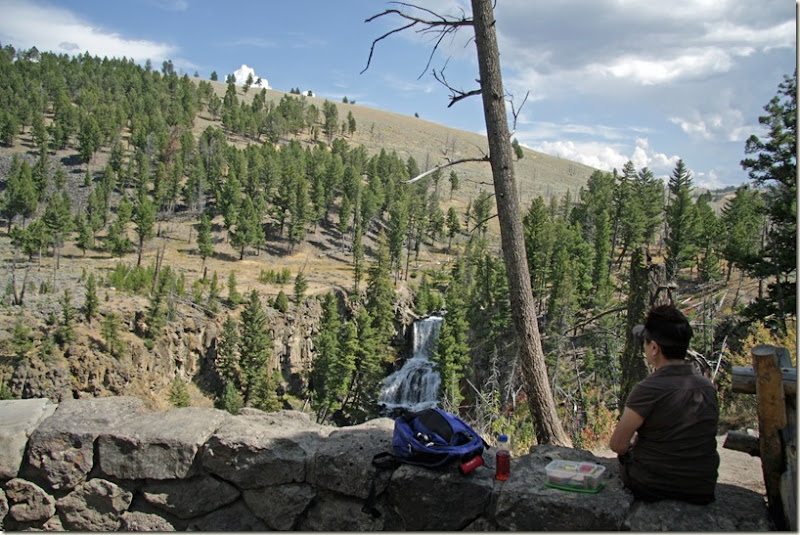 Driving across the big sky country of the BlackTail Deer Plateau we could see that we were heading for the large thunderstorms coming from the south. I wish we could have seen some lightning but all we heard was some thunder. 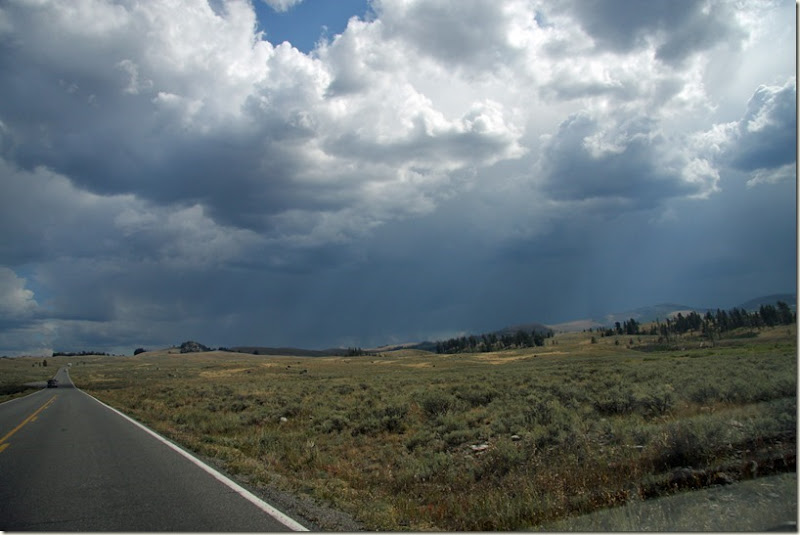 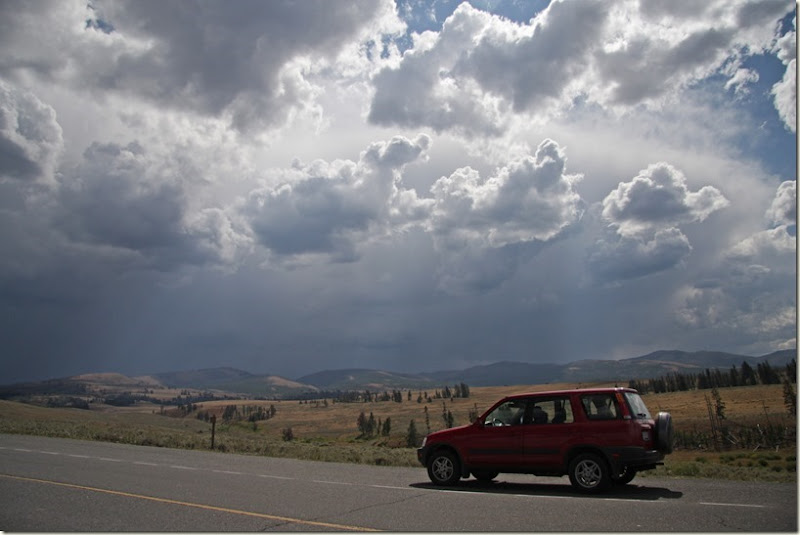 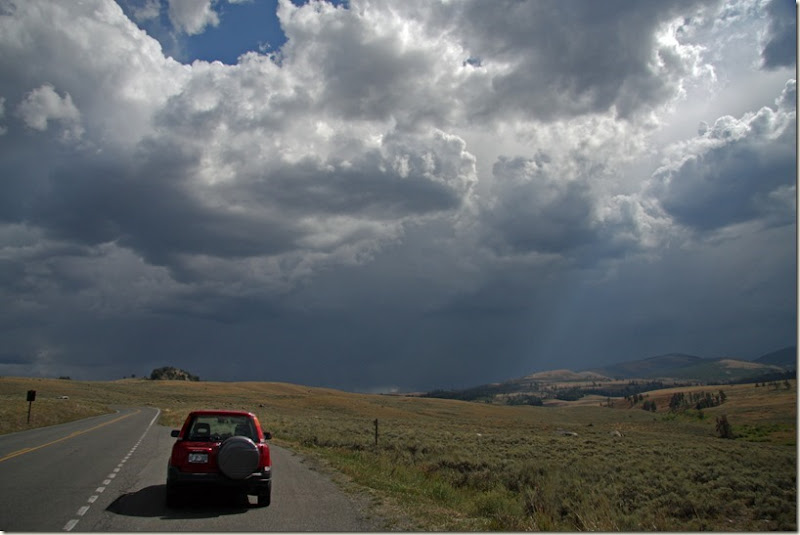 We took the dirt Blacktail Plateau Drive as an alternative to the highway for a short way. 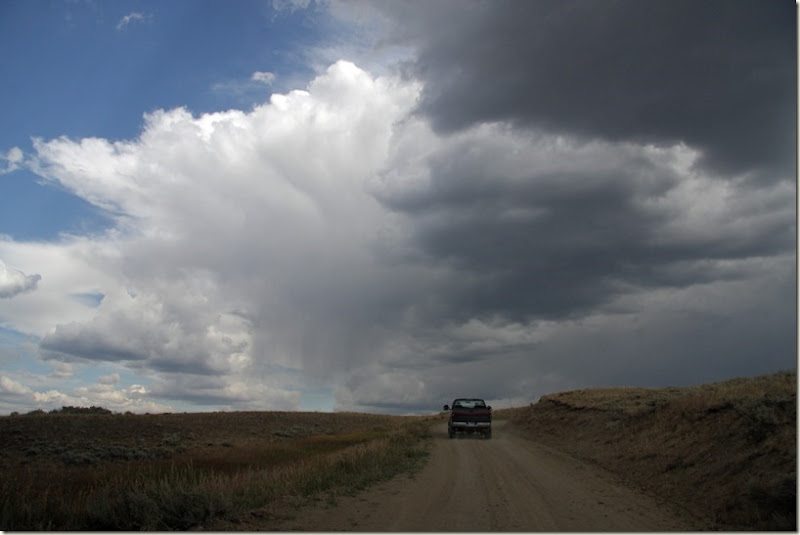 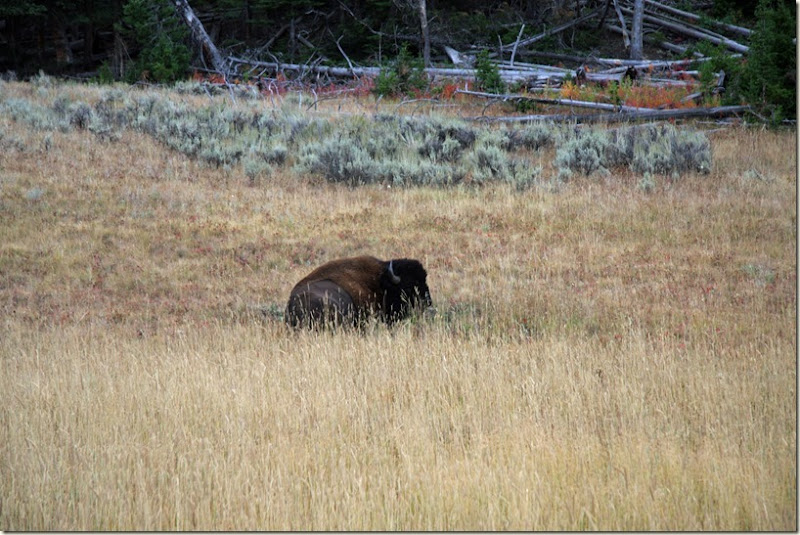 Turning south, you follow the Yellowstone River Gorge. This place was called the Narrows. 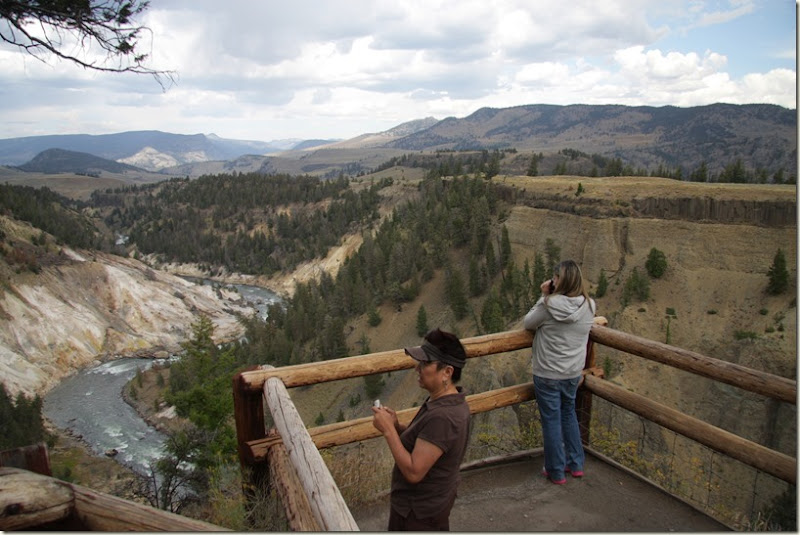 The opposite cliff had this line of basalt columns near the top. I guess that is from the volcano eruption. 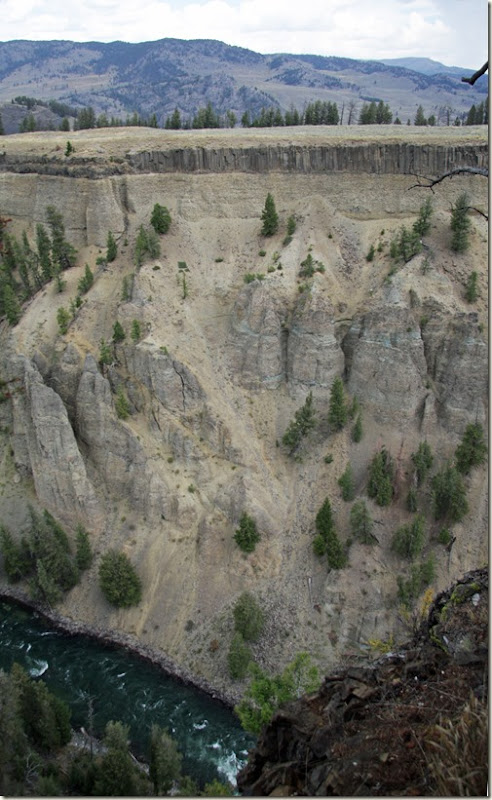 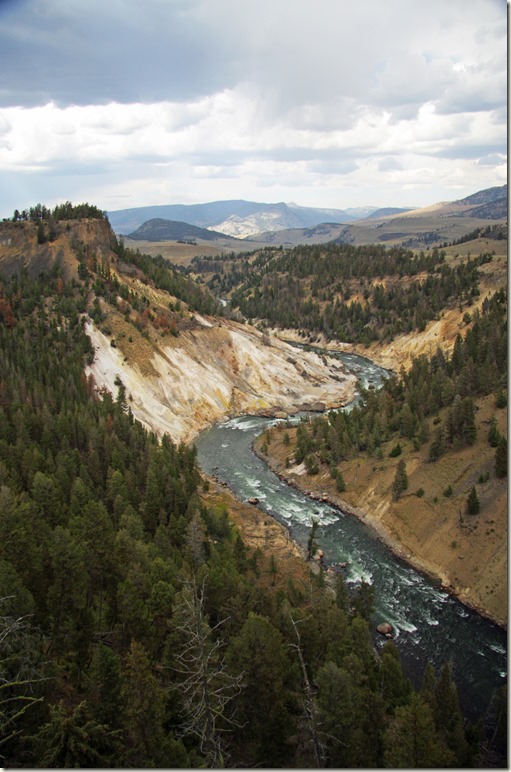 One turnout was at this shear wall of basalt columns. You can barely see Jennie standing on the far side of the road. I told her she has to wear brighter colours. 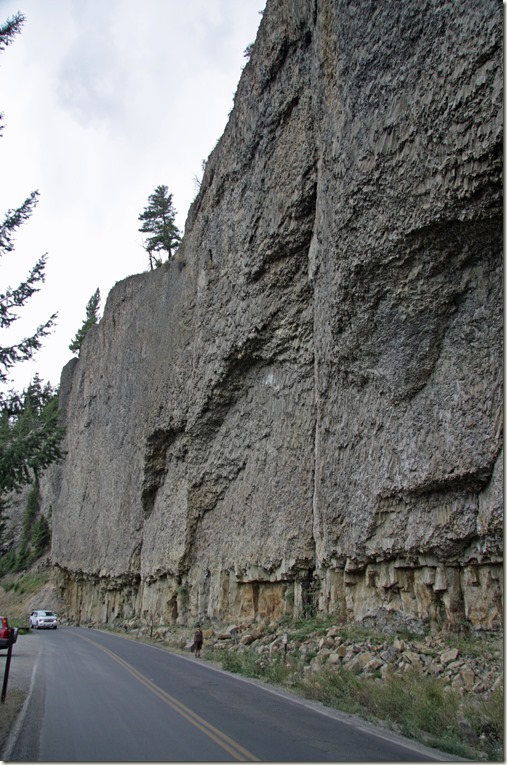 Tower Fall is where Tower Creek enters the Yellowstone River. The Fall occurred because the river eroded the rock faster that the creek could. They were very pretty and I wish we could have gotten closer but the trail to the base was closed. 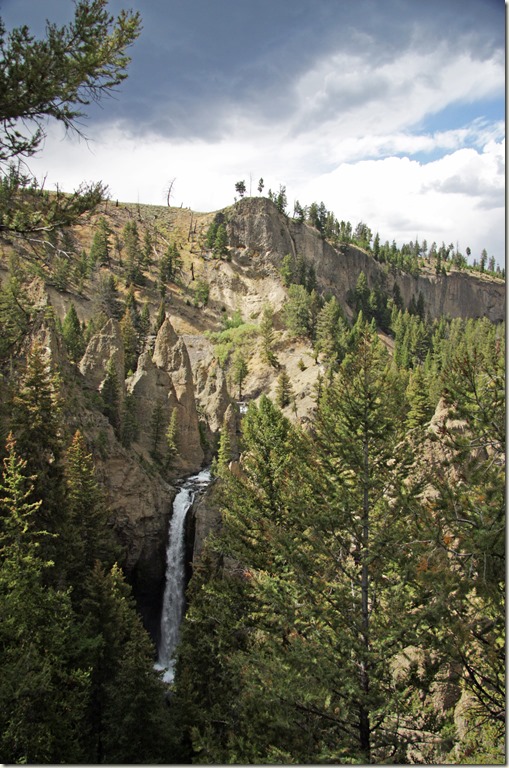 Next you climb up about 2000 feet to 8800 foot Dunraven Pass. The views of the plateau below were quite beautiful but there weren’t a lot of turnouts and the pictures I did take aren’t worth showing.

Another threatening sky picture from the top of the pass. 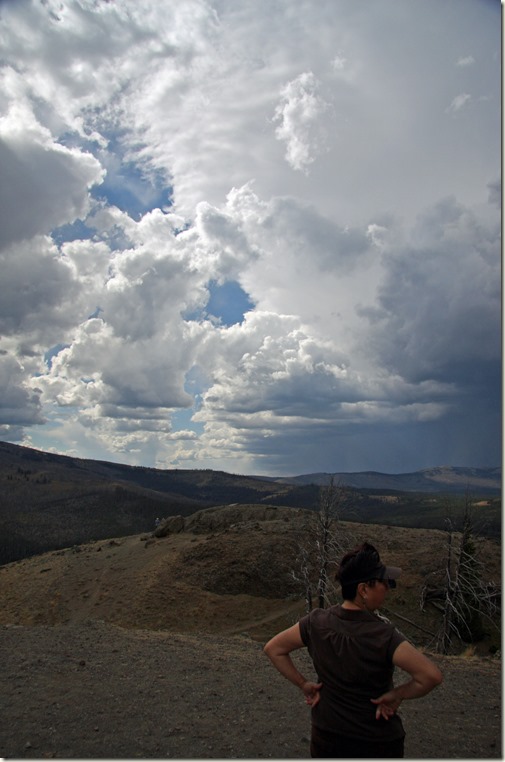 It got dark and started to rain on and off, sometimes quite heavily, so we headed for home. It really poured back in West Yellowstone just after we got back to the RV.

If you do come here, this loop is definitely worth doing. The wide open vistas are amazing but hard to capture in pictures.