The weather forecast called for thunderstorms today so we decided to spend it indoors / underground.

Tourists can only enter these caves with a ranger led tour. During the summer both caves offer a variety of tours but after Labour Day they each only offer one. They are both their mid length tours and are probably the ones we would have picked anyway.

During the summer they each offer “wild caving” tours that involve rope assisted climbs and belly crawling. To participate you must first crawl through an 8 1/2 inch high by 24 inch wide opening. Not happening!

We first went to Jewel Cave National Monument because it was closer to the campground and caught the 10:30 Scenic Tour. It last about 1 1/2 hours, is about 1/2 mile long and involves climbing up or down 723 steps.

Jewel Cave is currently the second longest cave in the world with 155 miles of it explored. The number if constantly growing as cavers are always finding new passages. The currently known cave is all contained within 3 square miles on the surface.

The entry and exit to the cave is very civilized. You take an elevator down about 200 feet to start and the same one goes down about 300 feet to pick you up at the end. 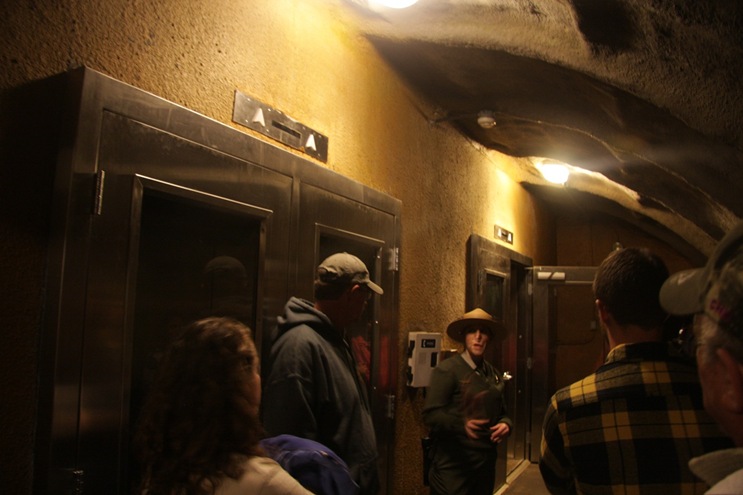 Both caves are mostly dry so not many stalactites and stalagmites but lots of interesting formations none the less. Jewel Cave was very wide open with lots of huge room. There were many stops where the ranger gave talks. 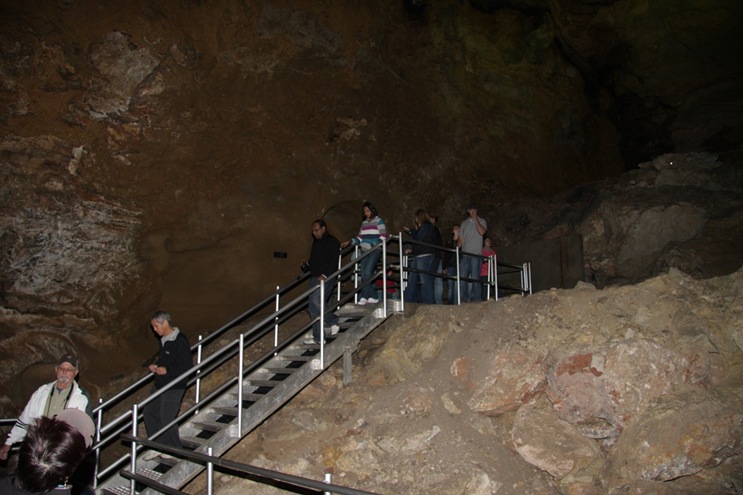 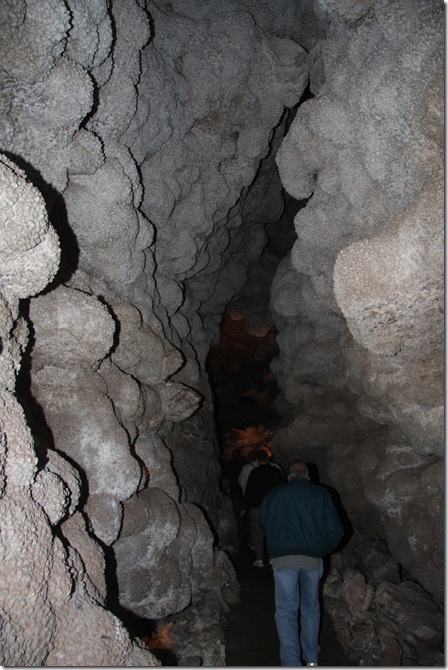 Jennie closed her eyes to avoid being blinded by the flash. 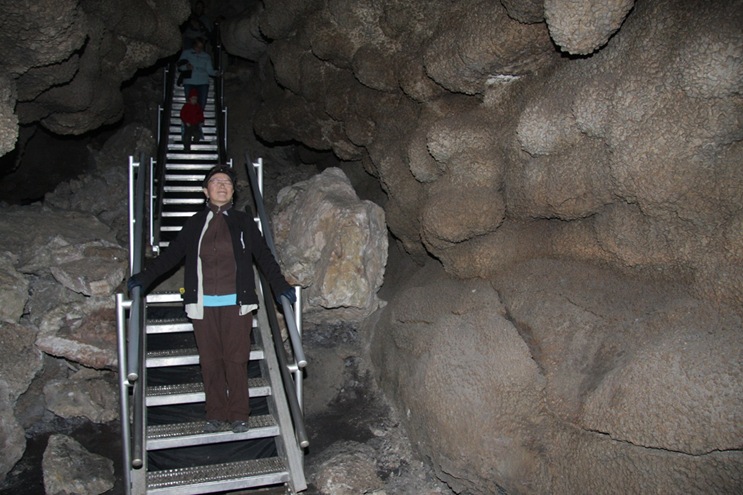 One of the few places it actually sparkled. 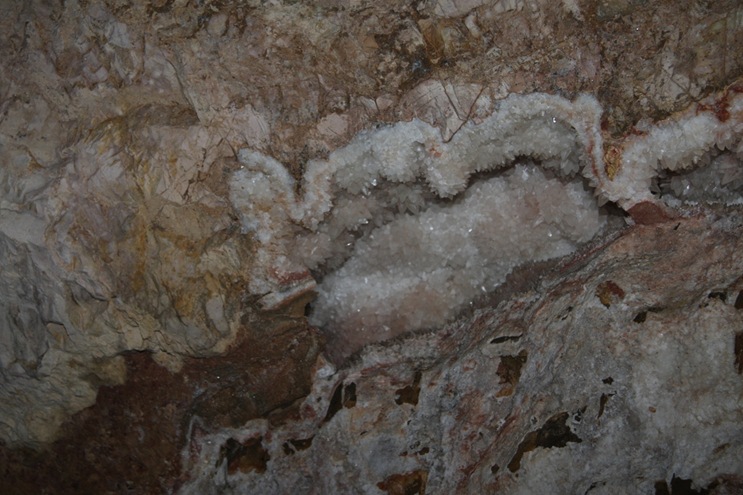 There were a few wet spots where most of the interesting stuff was located. 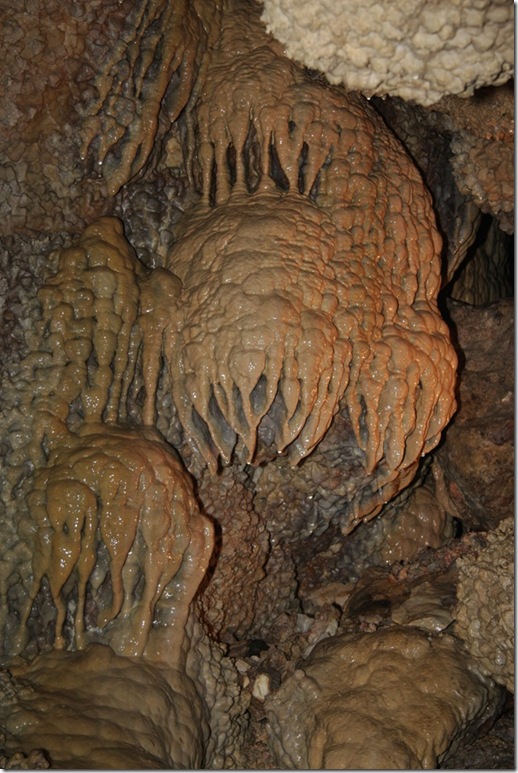 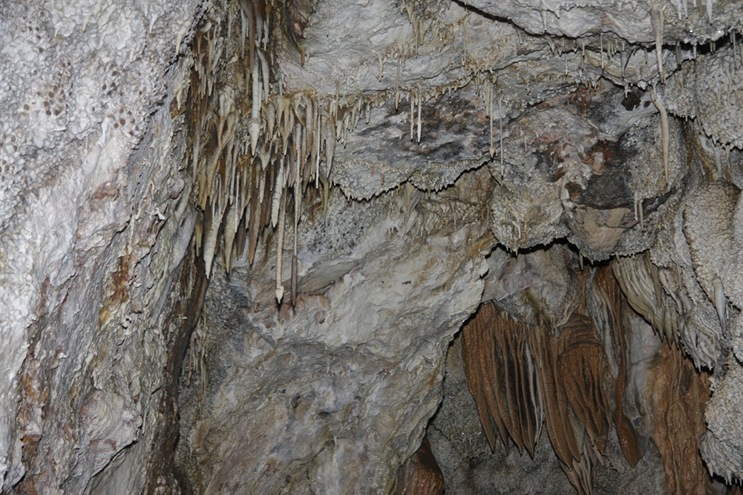 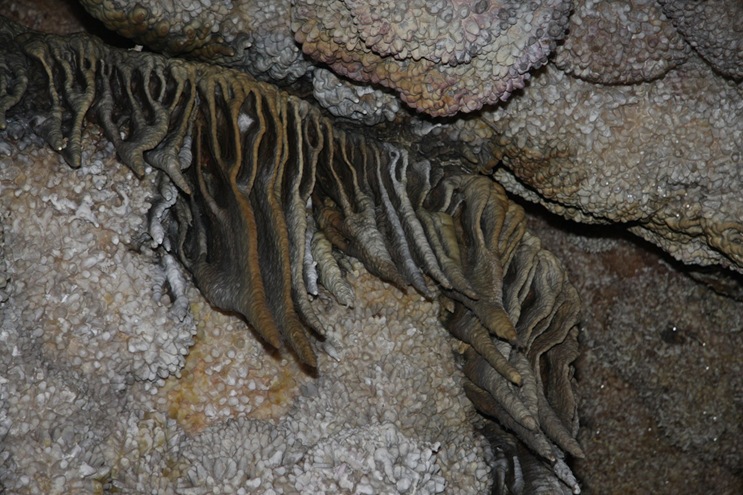 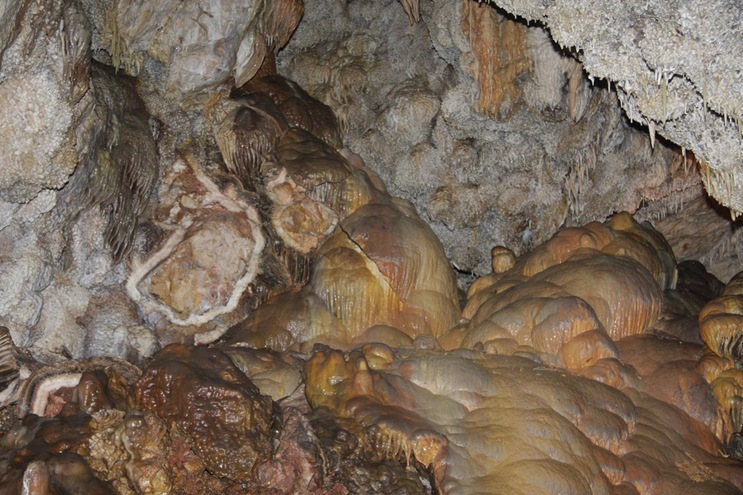 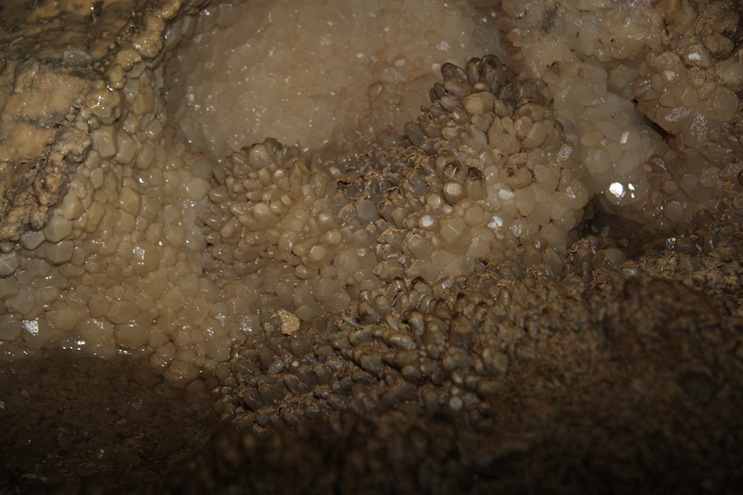 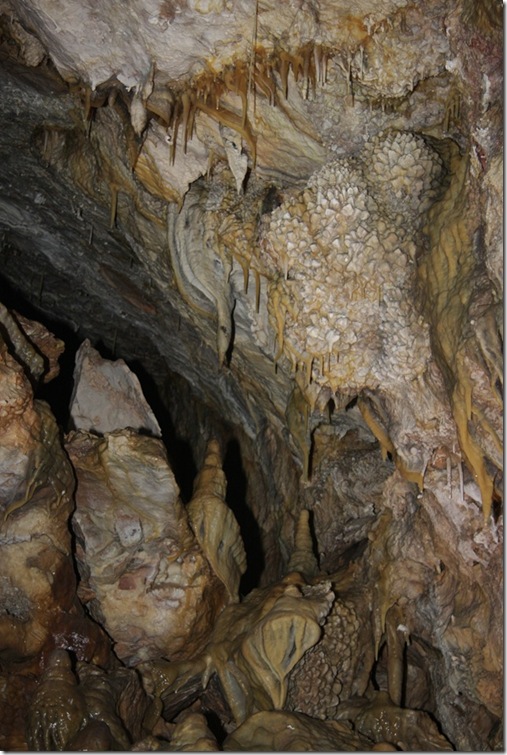 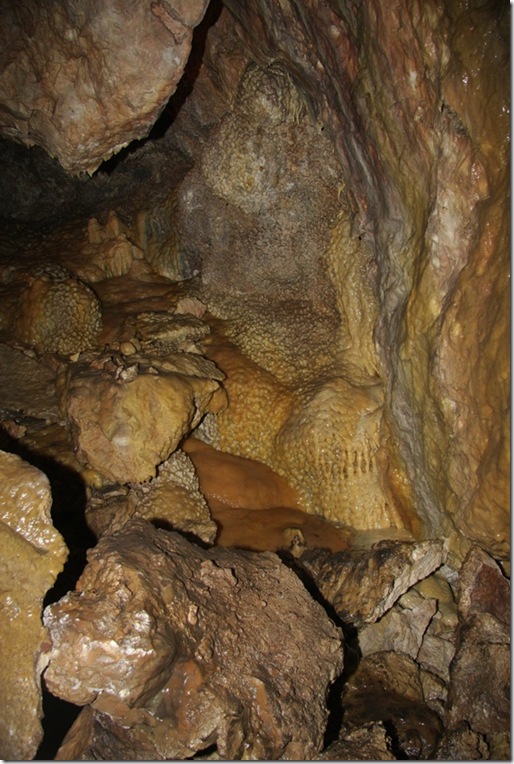 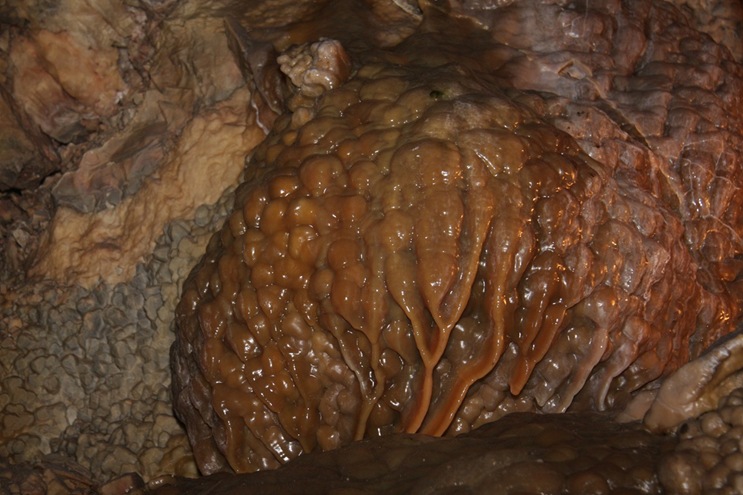 And finally, what the ranger called “Cave Bacon”. 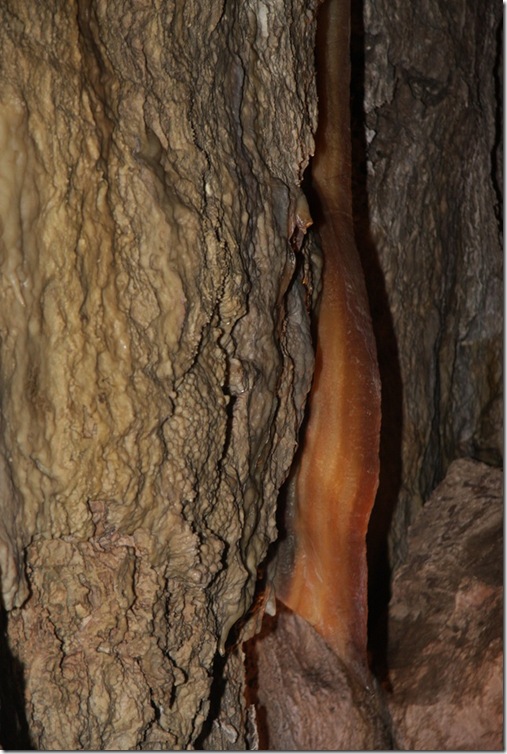 After lunch we went to Wind Cave National Park. This one is the fifth longest in the world with 136 miles mapped. I forget how they guessed but they estimated that only about 5% of the cave has been explored. So far this one fits under 1 square mile of land on the surface. 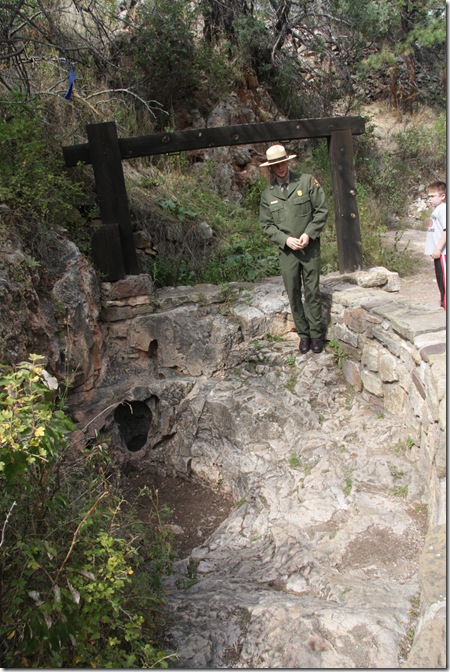 That little hole is the only natural entrance. As high and low pressure weather systems pass by the air rushes in or out of the hole to equalize the pressure in the cave. Wind speeds up to 70 mph have been measured. For very long time this was the only entrance and explorers had to squeeze though to get in. We went in through a revolving door.

This tour was much different from the other one. First there were a lot more people (about 30). Upon entering you climb down a LONG steep set of stairs. 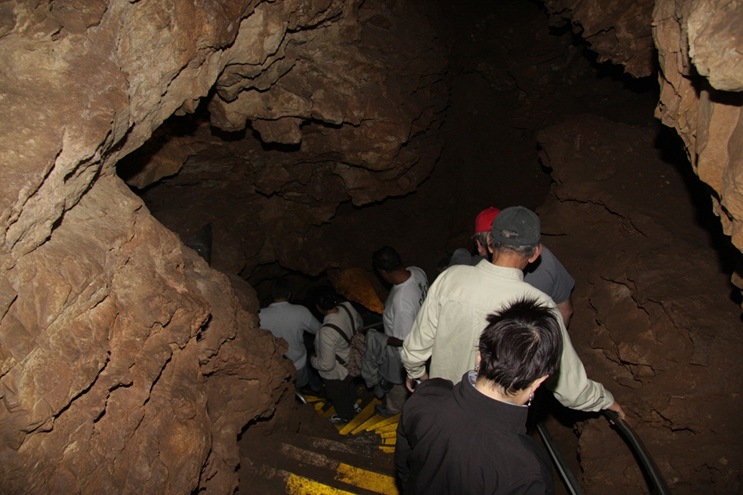 After that the trail was fairly level but quite low and constricted. Even Jennie had to bend down occasionally. 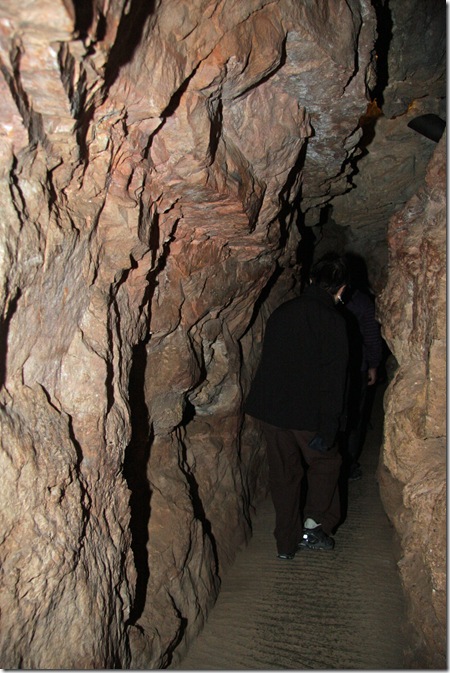 There were only 2 open rooms where everyone could gather and the ranger could talk. Mostly we just trouped along single file looking at things ourselves. 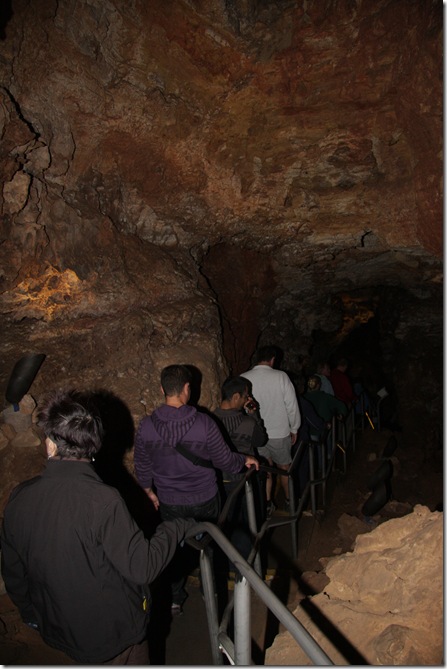 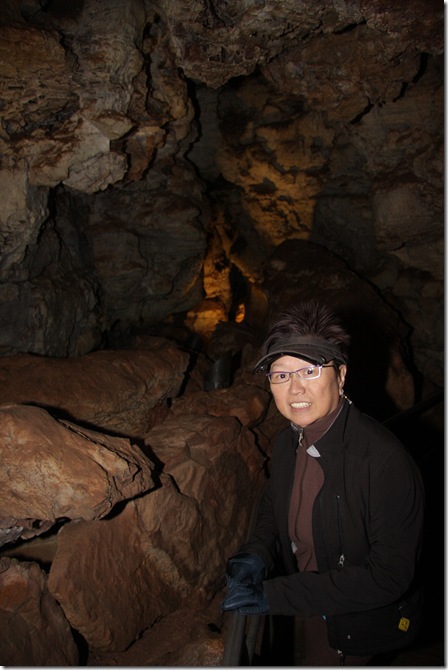 This cave has no water now. It is mainly known for a formation called boxwork. The cave walls are mainly limestone. Under pressure it developed webs of cracks which were filled in by harder minerals deposited by the water seeping from above. As the limestone dissolved away only the hard minerals were left. 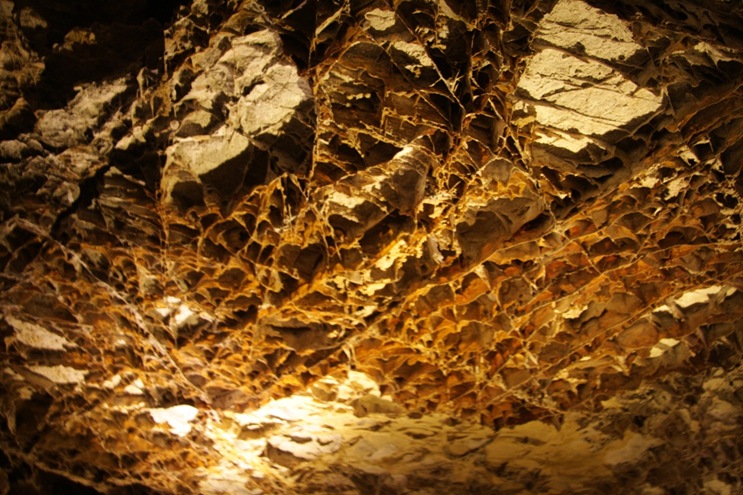 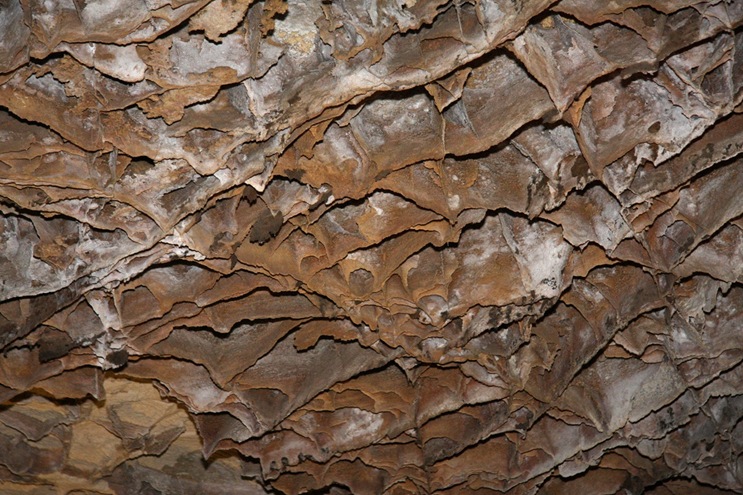 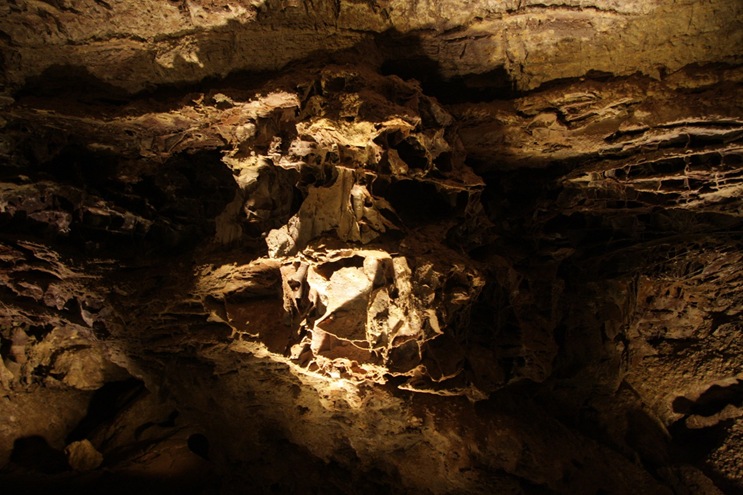 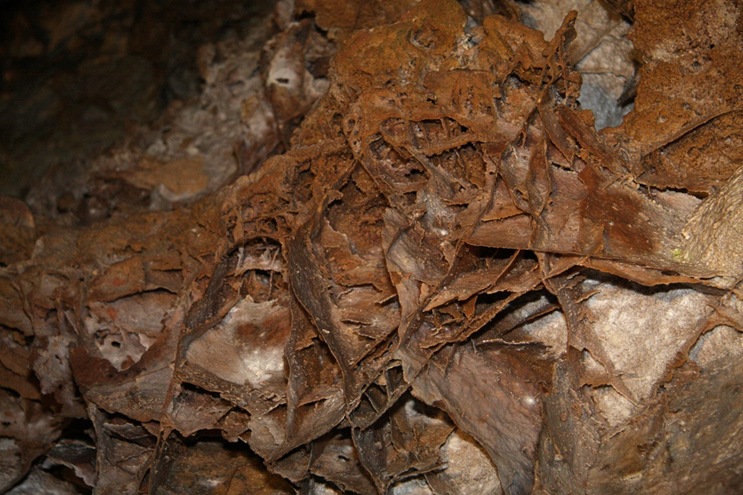 At the end we took an elevator back to the surface.

We definitely enjoyed the Jewel Cave tour more. It was much more varied and colourful. Maybe other tours at Wind Cave are better.

On the way back to the RV we took a scenic drive through the park. There are more bison here and we got stopped for a short time. We also saw some antelope and wild turkeys. 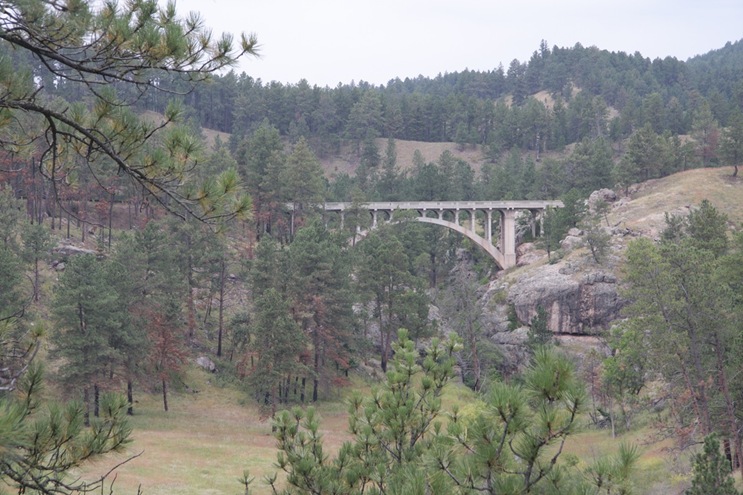 Here is a road sign I have never seen before. The road loops around and you go over the bridge. However, we came from the same direction as this car and the sign on that side is placed before you could even see the bridge so I had no idea what kind of intersection we were coming to.

It didn’t start to rain until we were driving back and once were were safely in the RV the heavens opened and it poured for a couple of hours.