I am doing this write up in 2011 mostly from memory and the pictures. It was such an amazing trip that I still remember most of it like it was yesterday.

We flew from Toronto to Los Angeles (4 hours), to Auckland (11 hours), to Christchurch (1 hour). It made for a very long day, especially for the girls as this was their first long flight.

On top of it all, the flight from Chicago was late leaving so we actually had to run through the terminal to make our Air New Zealand flight to Auckland. In Auckland we had to collect our luggage and drag them, very late at night,  to another terminal for the flight to Christchurch. Unfortunately it seemed that only part of our luggage had time to be transferred to the Auckland flight and was still in Los Angeles. Two of our four bags were missing. Thankfully we had each cross packed some of our stuff in multiple bags just in case this happened.

We put in the baggage lost claim in Auckland and once we had time when we got to Christchurch we figured out what they were going to do. They said to leave them our itinerary and they would get the bags to us when they arrived. In the end we were without them for 2 nights and they eventually flew them to Queenstown and taxied them to our campground.

This was to be a three week trip with one of the weeks overlapping March break at home, so we had to take the girls out of school for 2 weeks. At this time Lynn was 15 and was very upset (to say the least) at the prospect of being away from her friends and having to spend 3 weeks cooped up with her parents. All that quickly disappeared once we got here and she realized what it was like.

Another note, on the pictures. This is just around the time of the switch from film to digital cameras. Being the gadget freak I am I had recent bought a new digital camera. It was a Kodak with a whopping 2 megapixels for around $2000. I also bought the largest flash card I could afford. It was a whole 20 MEGAbytes for several hundred dollars. What this meant was that at full resolution I could only take about 24 pictures each day before the card was full and I had to empty it onto the laptop. If I wanted to take more pictures in a day I had to lower the resolution for about 1/2 megapixel and then I think I could get about 70 pictures. This did cramp my style a bit but it sure was wonderful being able to see the pictures each night.

We arrived in Christchurch vey early in the morning. After sorting out the luggage situation we took a taxi to the motorhome rental place. We had rented the largest one they had which was a 22 foot class C (the ones with the bed protruding over the cab). Once we had the orientation tour they asked us if we had booked our passage on the ferry to the North Island. Since this was going to be a somewhat free form trip I had not. They said we should do it now as this is the busy season and a lot of the trips are full. Thankfully we managed to get a spot on a trip at about the halfway point of our time in New Zealand.

This brings up another topic. We had booked this trip through a travel agent. All they did was book the flights, motorhome, a few hotels and the cruise on the Great Barrier Reef. On top of not telling us about the ferry they screwed up what little they did have to do. Before we left I very carefully went through the booking and discovered that they had booked us into a hotel in Auckland for the 17th after we had dropped off the motorhome, but had booked the flight to Cairns for the 16th. I found this early enough that all it took was a quick call to get fixed. I seem to remember there were other mix ups, nothing major, but I just can’t remember them.

As for an itinerary, my brother had spent 3 months biking here and my parents and other brother had recently spent vacations here so we had a list of must see places. Along with their info and the Lonely Planet guide book we were just going to wing it, time wise. Our only deadlines were the ferry and the flight to Cairns. It was easy finding campgrounds so each morning I would just call ahead to where we wanted to be to check if there was space.

Once we loaded up the motorhome and shopped for groceries, we hit the road across the middle of the south island.

In New Zealand you drive on the left side of the road so that took a while to get used to. As well, the motorhome has a standard transmission so I am now shifting with my left hand. It feel very weird. 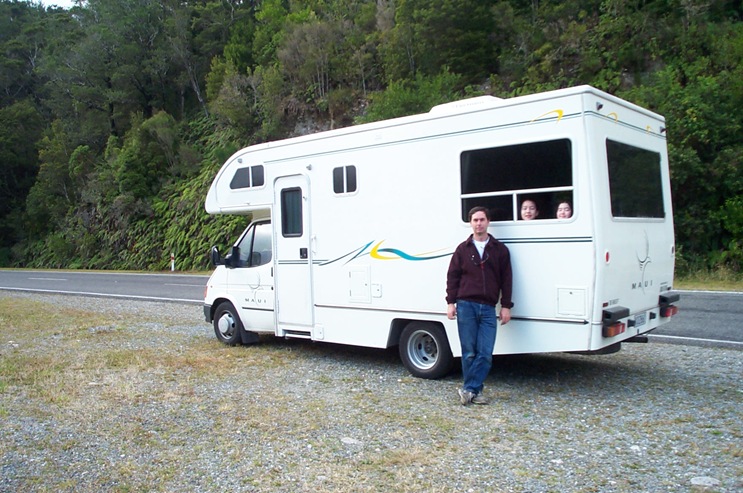 I never did take a picture of the inside. Jennie and I slept over the cab. There was a table in the back that folded down into a bed. We never used it as a table. This was the kid’s domain. They had big wide windows back here to watch the scenery go by. Many days we would be on the road before they even got up.

Our first stop was the Church of the Good Sheppard on the shores of Lake Pukaki. You can see Mount Cook, the highest in New Zealand, at the far end of the lake. I had thought about driving up for a look but the side road was quite long and we had seen lots of mountains in the Canadian Rockies so we skipped it. 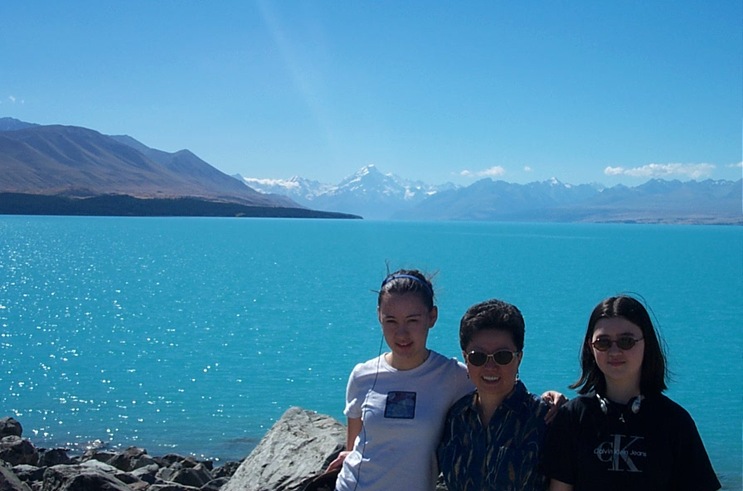 I had not intended to drive all the way to Queenstown. When we got to the planned spot it didn’t look great so I called ahead to the Queenstown campground and we pushed on. We arrived well after dark. We vowed not to do that again as it was too far for one day.