We missed the good weather by a day. We are supposed to have sunshine for at least a week. I always worry that pre-booking the campgrounds means that we don’t have as much flexibility in cases like this. I think the lack of worry about having a place to stay, especially in the busy summer months, outweighs the few times that we wished we could have stayed somewhere longer.

Today we started our exploration of the Chilcotin Region of BC. We headed north to Williams Lake and then turned west to start the trek out to the coast and the town of Bella Coola.

Originally I had though that we would just spend the night at the Walmart in Williams Lake but then I read about the Chilcotin Lodge that was only a short distance from town and was actually closer to the drive that I want to do tomorrow.

Heading out of Lillooet we followed the Fraser River for a short time. 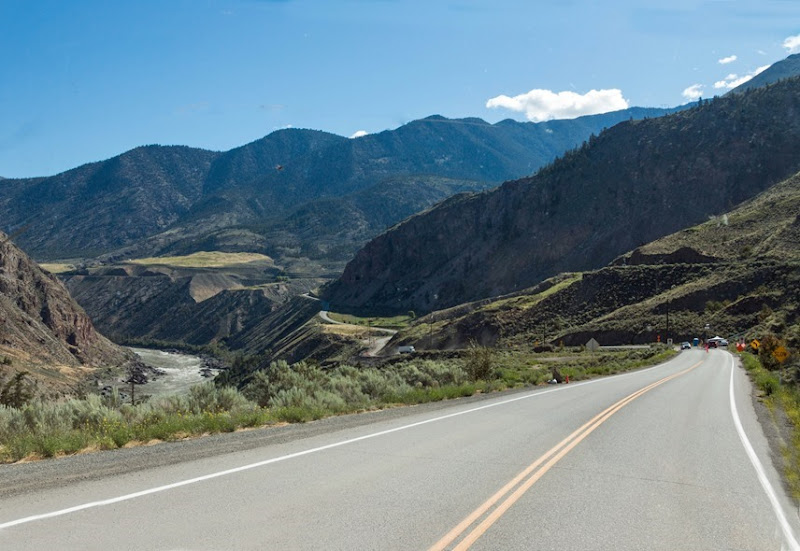 There was one weird and dangerous spot where we were going steeply downhill, we rounded a corner and suddenly there is a very sharp turn and a one lane bridge under the railway. No warning signs at all. To top it off you can’t actually see what is coming the other way until you are almost through and no mirrors. 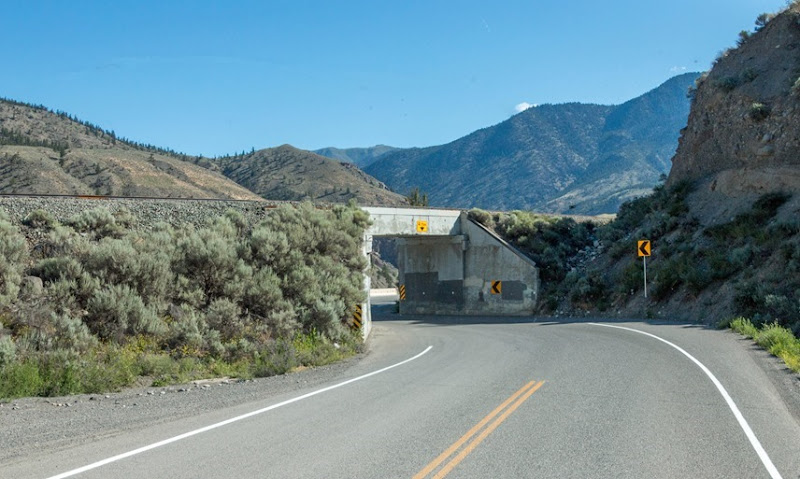 I seem to remember reading about this and all the panicked, skidding stops that happen here. I admit that I hit the brakes pretty hard. This is the Google maps view. 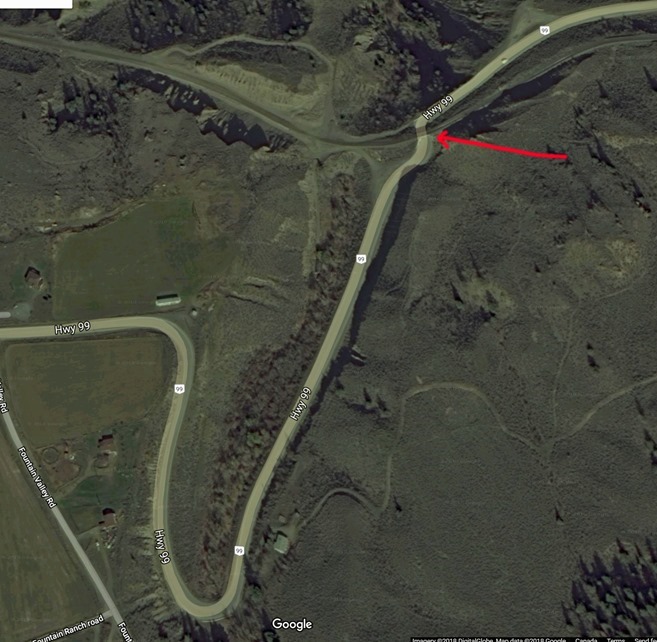 Then we climbed up to go along the plateau beside the river. 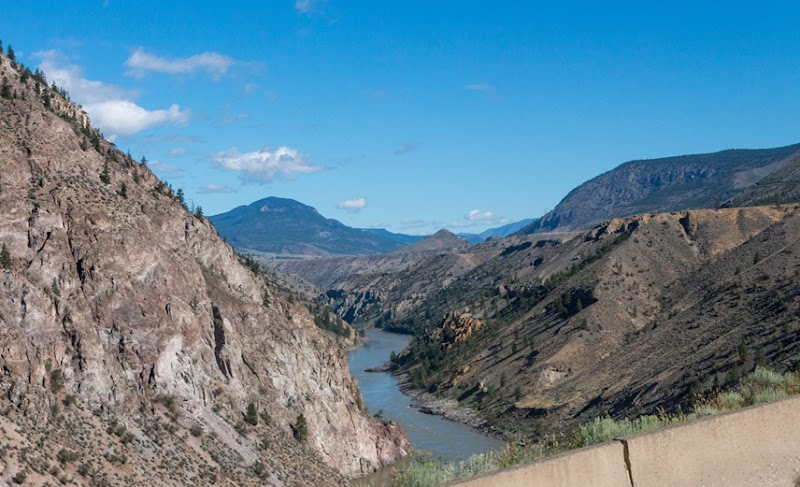 It’s very dry here. All the farms had the huge irrigation sprinklers. 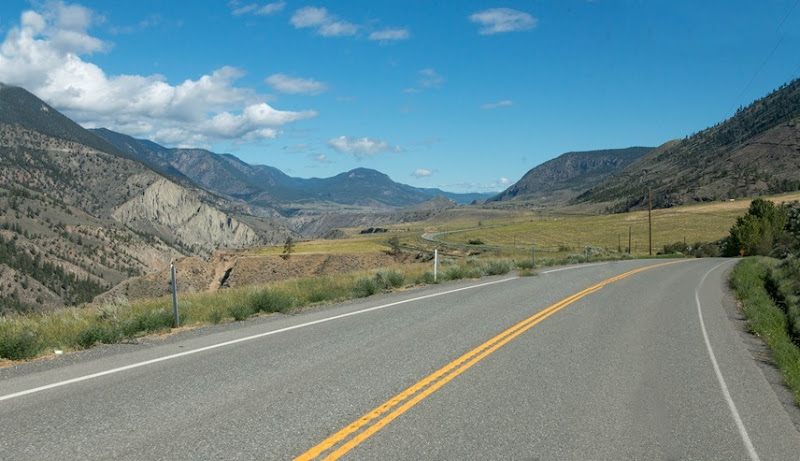 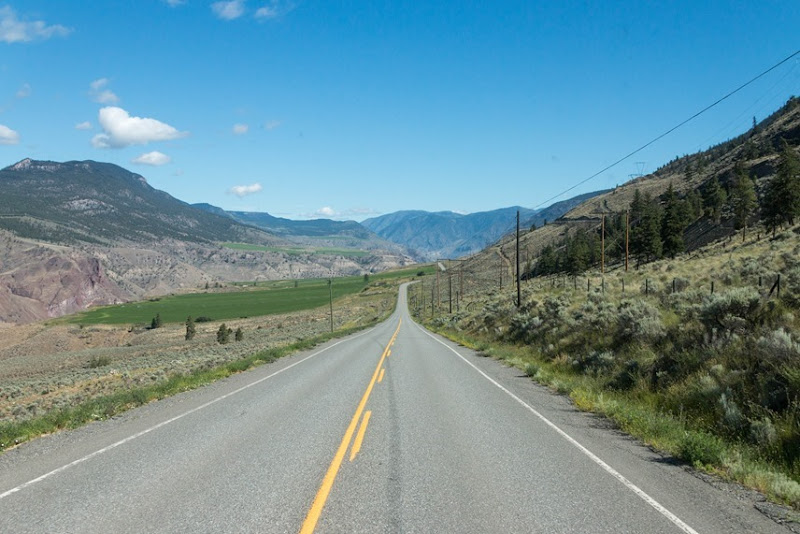 At one point we drove by Marble Canyon Provincial Park and I wondered if we were missing something. Then this appeared by the side of the road. A huge marble quarry chopped into the side of a mountain. 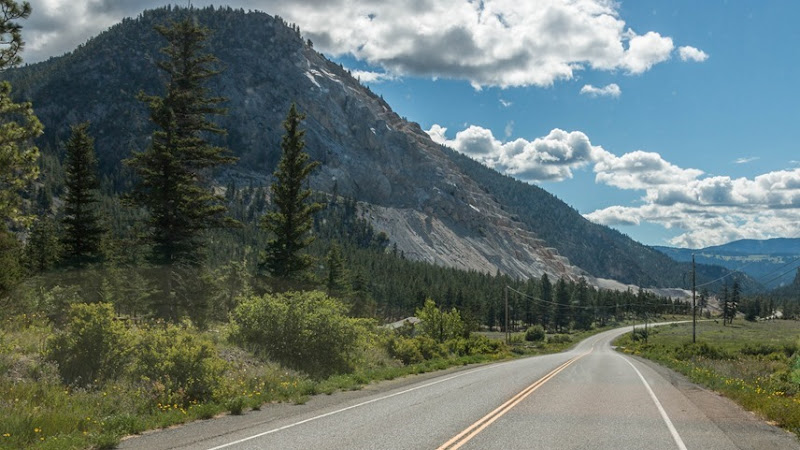 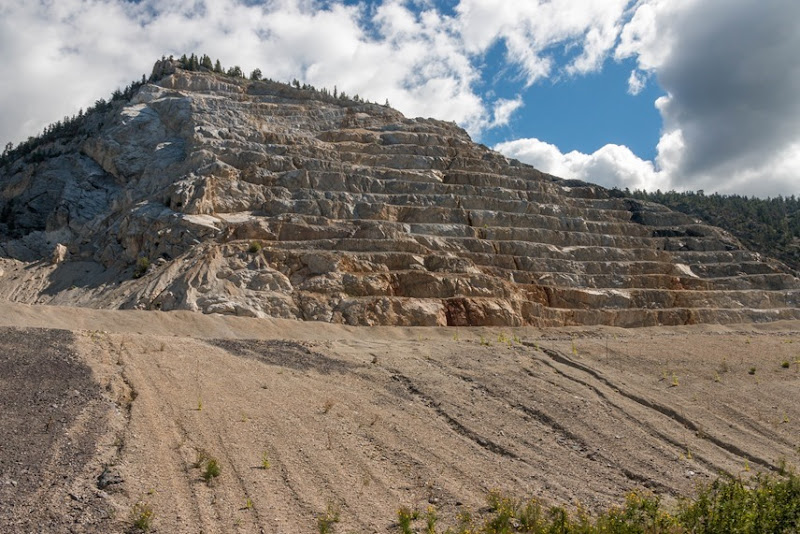 It started to get a bit greener. 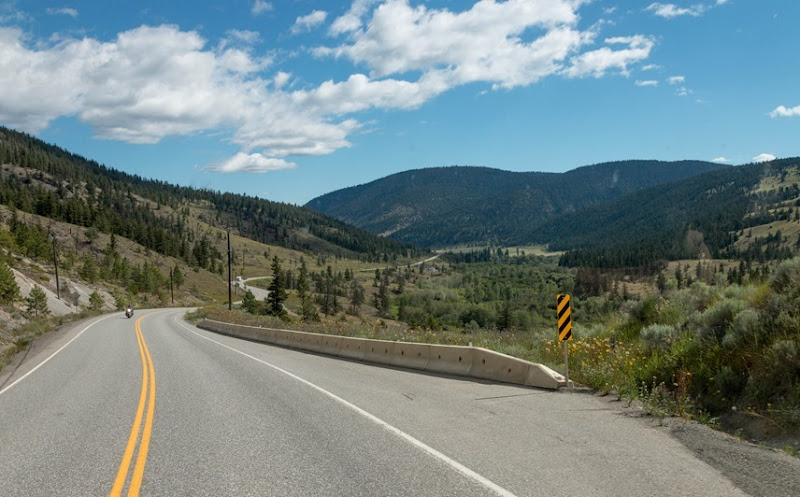 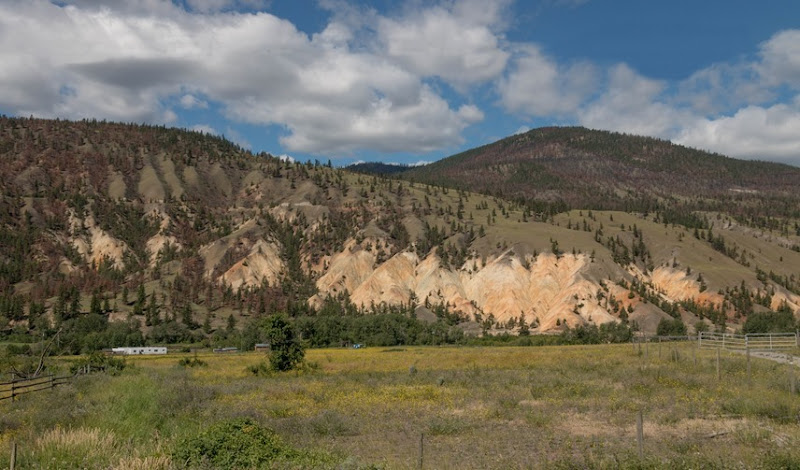 Heading north on Hwy 97 we could almost have been in Northern Ontario. 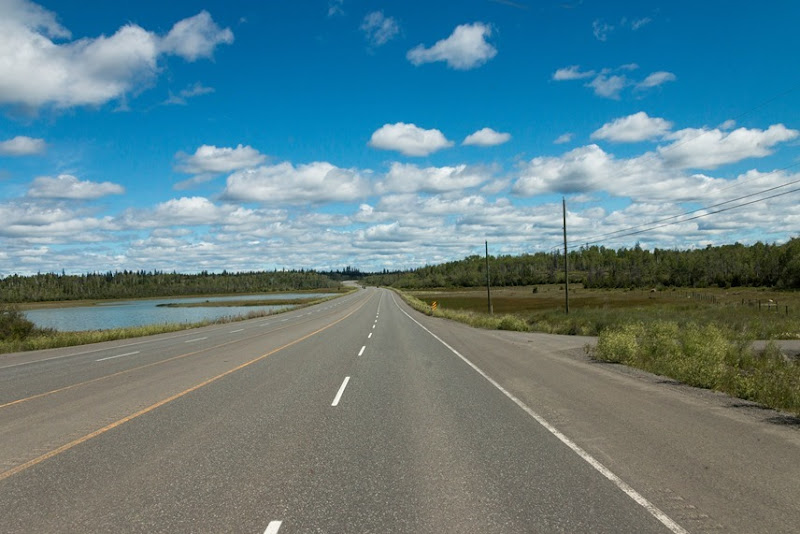 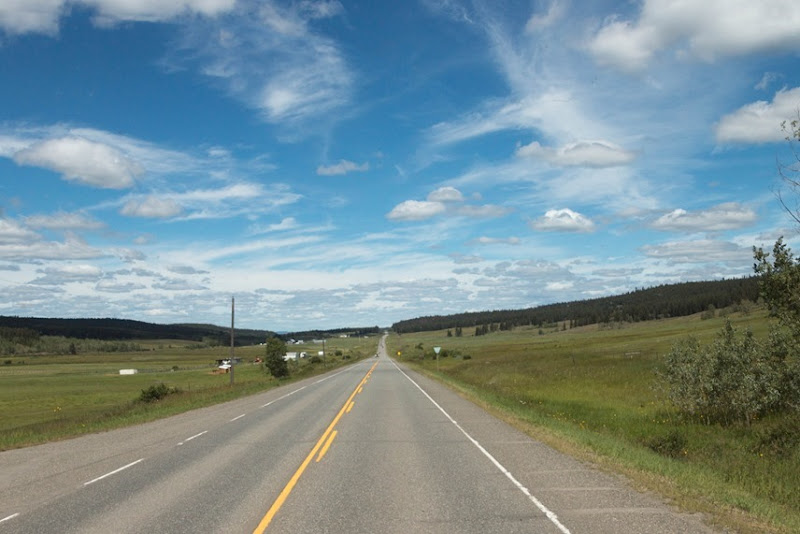 We stopped in Williams Lake for gas, groceries and a haircut for me.

The 50 km drive from Williams Lake to the Lodge was actually pretty tough. Thankfully there was very little traffic. We started with a very steep climb out of town. Then a long descent to cross the Fraser River and finally a very long steep climb up to the Chilcotin Plateau.

I wish we had taken some pictures of the Fraser Valley because it was quite striking but our minds were on just getting the RV through it.  Hopefully we get some on the way back because this is an out and back trip.

Here we are on the down slope knowing that we have to climb to that plateau in the distance. 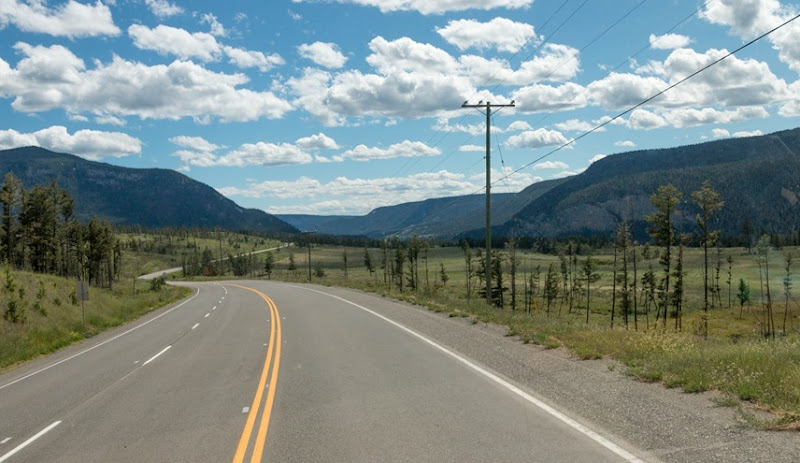 The Chilcotin Lodge has been around for a while but just got new owners last year. It is in a beautiful location. Here is a wide view of the site.

The owner’s house on the left. The line of RV sites at the back. The lodge with guest room in the center and the view to the right. 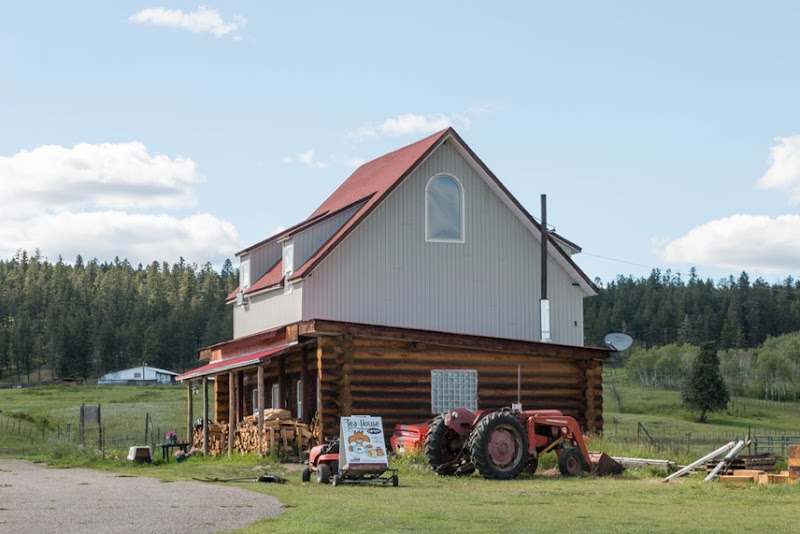 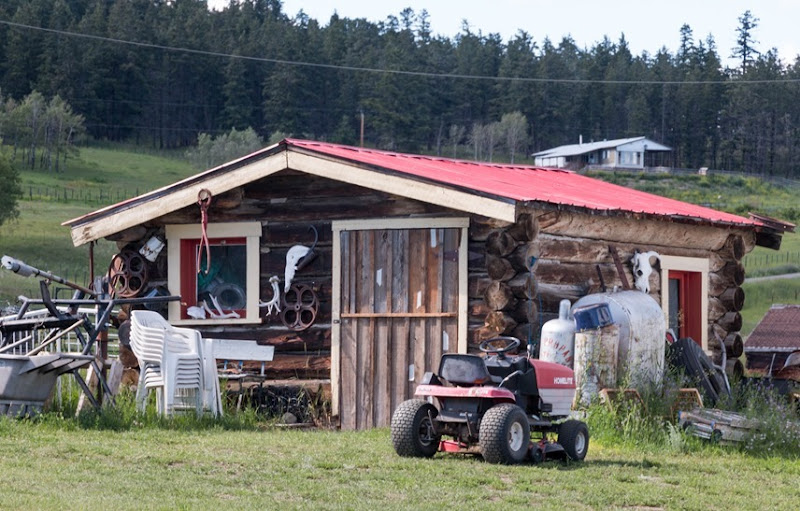 The RV sites are a bit rough and they are working to improve them but have other priorities first. The owner was very helpful at getting us situated. He even pulled out some huge boards to help us get level. 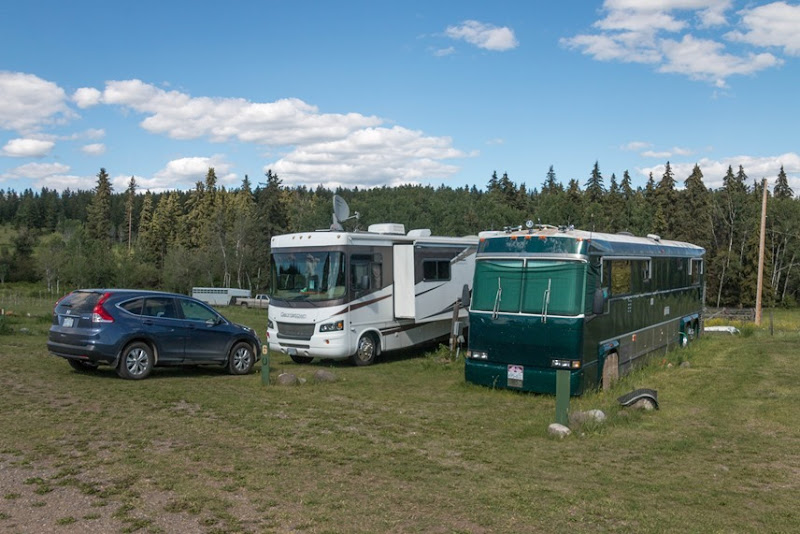 When I had called he said that the only power he had was 15 amp, the equivalent of a normal wall outlet. I said that we would make do. When we got here he said he had one 50 amp outlet. The old RV beside us belonged to his dad, who lived in it. Now that he is too old to do that, the son is trying to figure out what to do with it. He unplugged his dad’s RV, first making sure that there was nothing in the fridge and gave us the outlet. Which was great because it is actually hot up here and it was great to be able to run the AC.

There is no cell service here so we couldn’t use our cellular internet and their satellite internet has a severe data cap so they asked us to only check our email. That is why these posts are late.

There were some horses in a fenced in area. 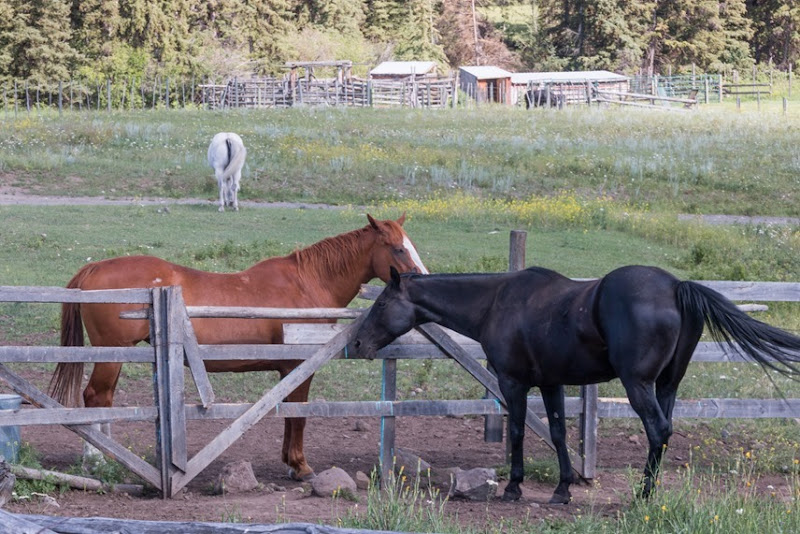 When I walked over the black one came to investgate, I assume hoping that I had something to feed it. Sorry! 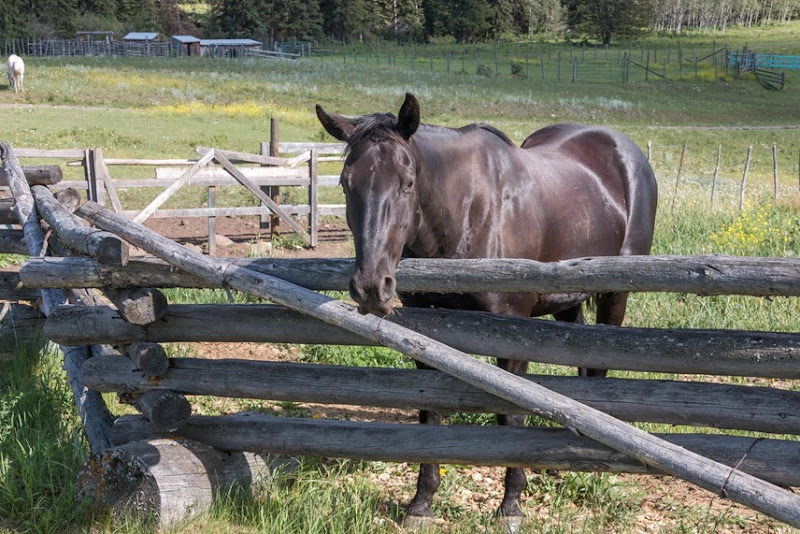 I did notice that there were a lot of bird’s nest in the eaves. They were rather loud. 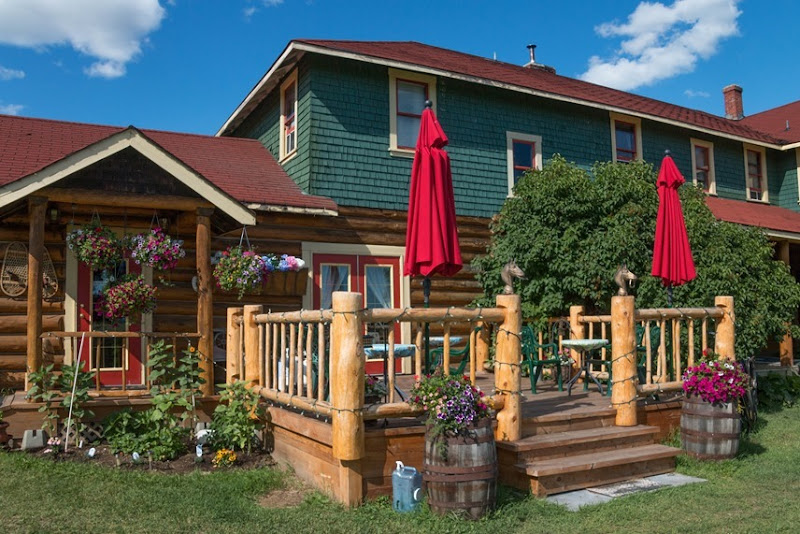 To sit and stare at the view.

Much better than a Walmart parking lot.