Today we hiked to through an alpine meadow to one of the peaks of Trophy Mountain.

Once again I should have read the trail description in much more detail. The summary box said 6 km return with 200 m in elevation with an option to continue to a mountain lake. No problem. We found out that the 3 km one way got you to the start of the meadow. To get to the lake was another 3 km one way and another 240 m in elevation.

The Wells Gray valley floor is at about 700 m elevation. The dirt road to the trailhead took us up almost 1000 m to 1670 m. The road was steep and gave the car a good shake but we could manage around 30 kph. Any car could do it as there were no large rocks.

The GPS graph of the elevation changes during the hike was almost a prefect pyramid. A constant climb for 5 km.

Up until we got to the meadow we were hiking through a skinny second growth pine forest. 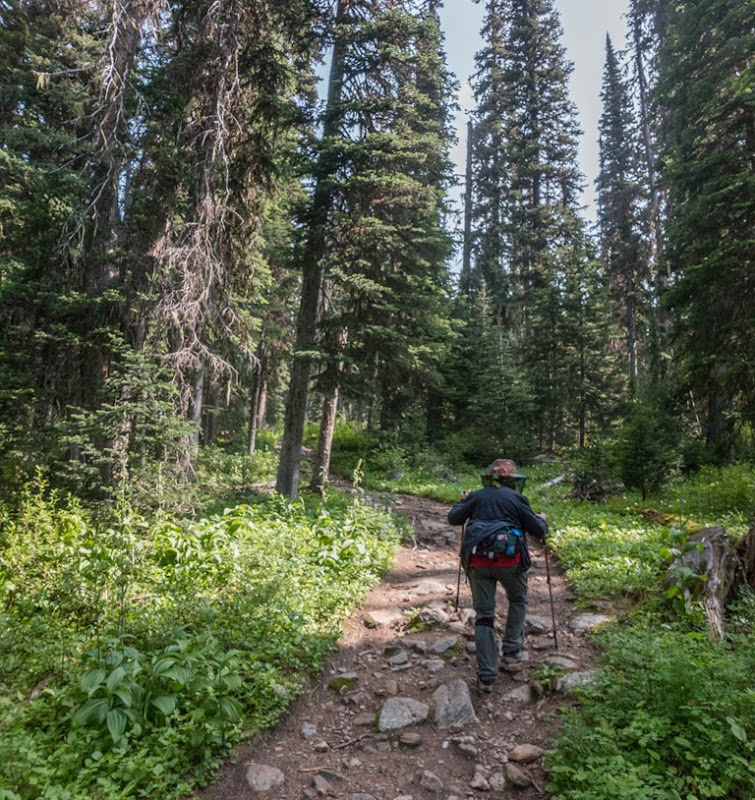 The trail was wide with only a few rocky spots, mainly near the bottom. The temperature was in the mid teens up here but the jackets quickly came off because of the climbing effort.

We saw this stump with some interesting growth on it. 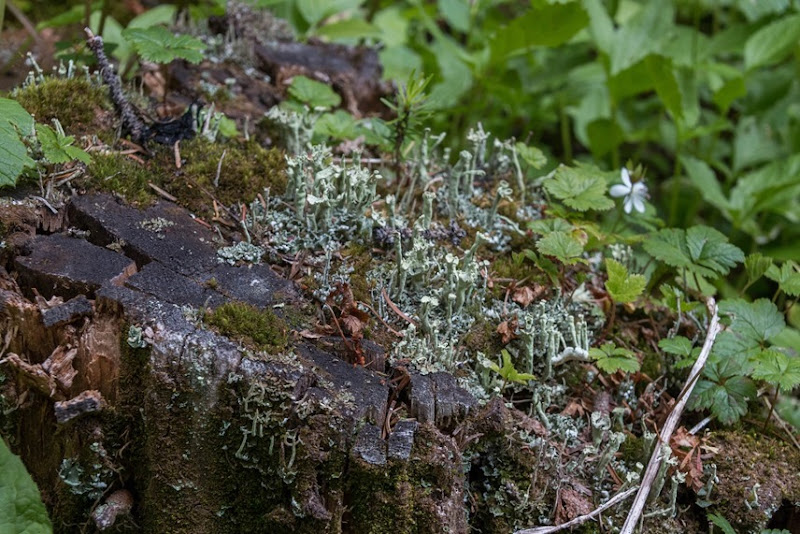 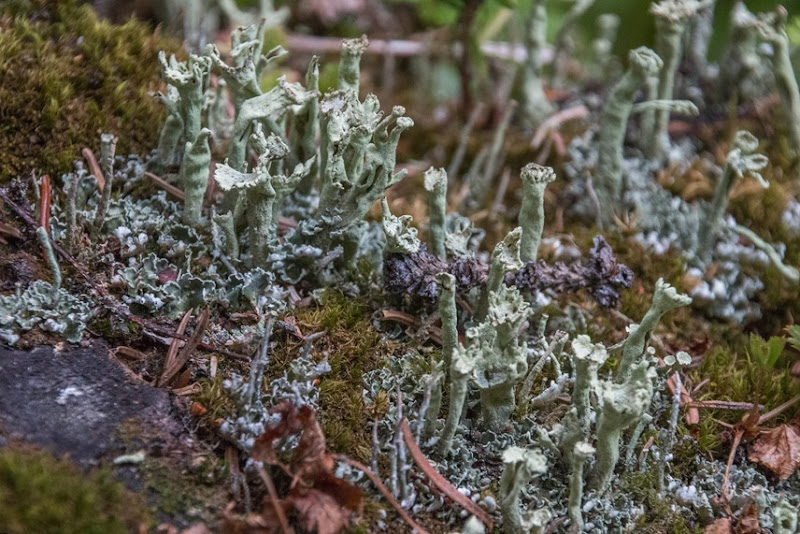 There were a few open areas to give us a hint of the meadow to come. 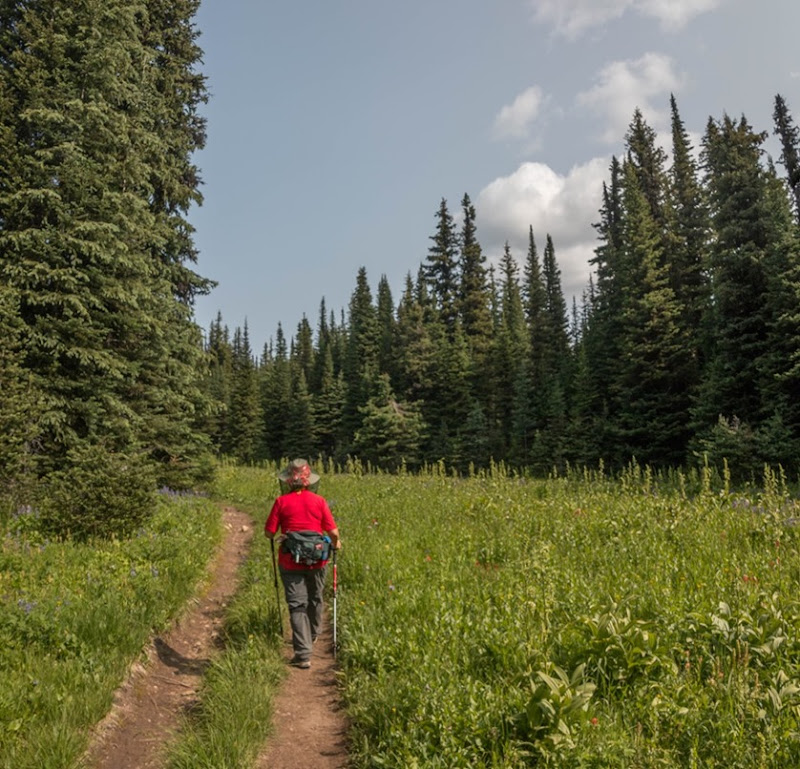 The bugs had been really bad in the trees. They were still present out here but at least in the meadow was a bit of a breeze. 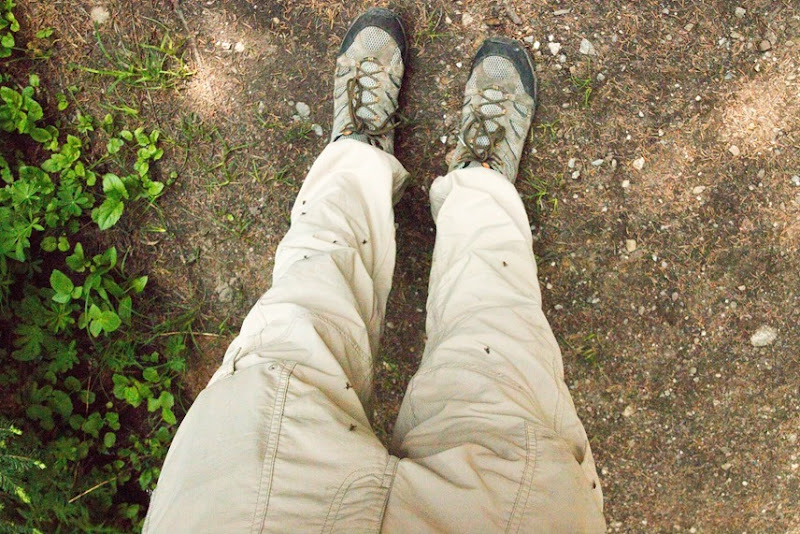 And then we were out in the meadow.

The photosphere. There was even a mosquito in one of the shots used to build it. 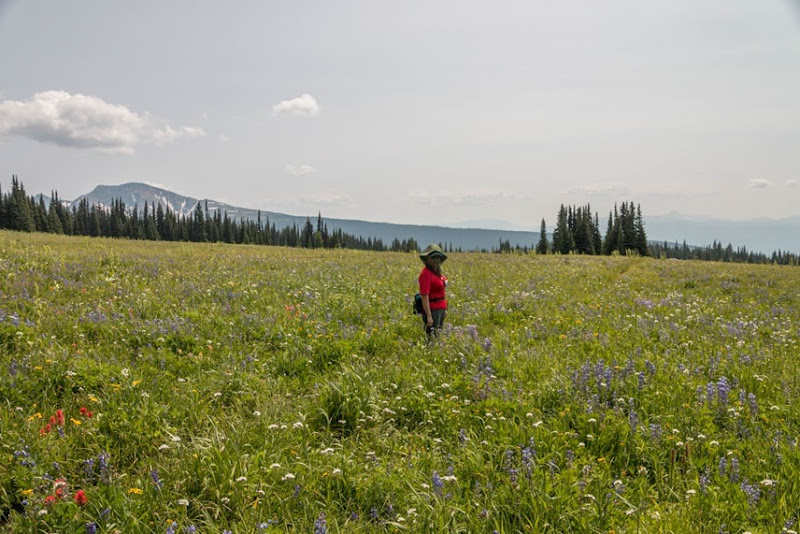 I love the vivid paintbrushes. 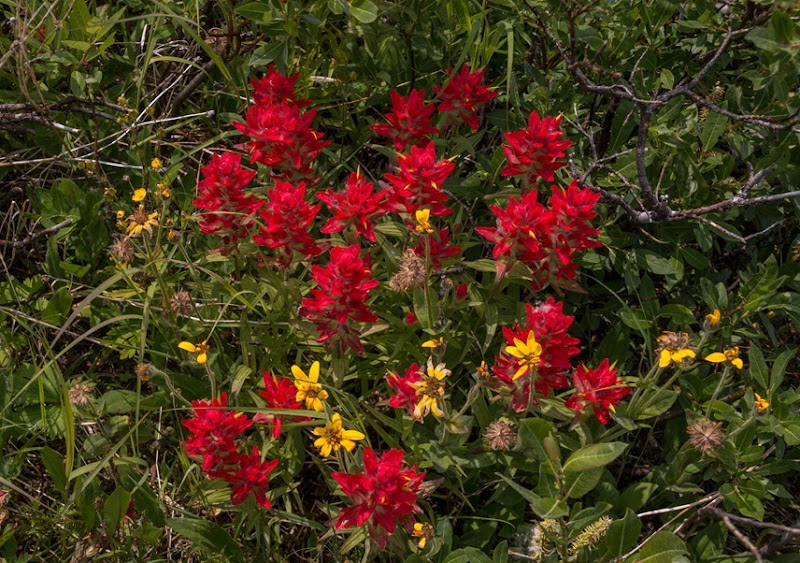 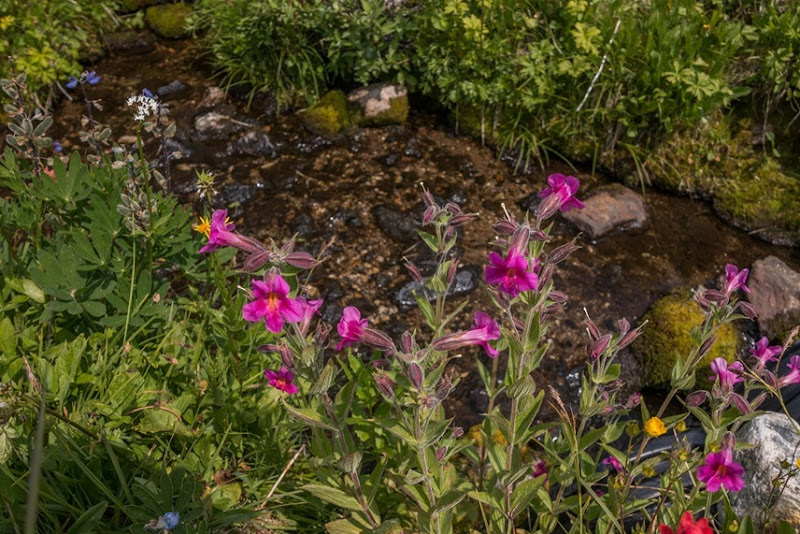 We’re not sure what these things are but there were a lot of them. 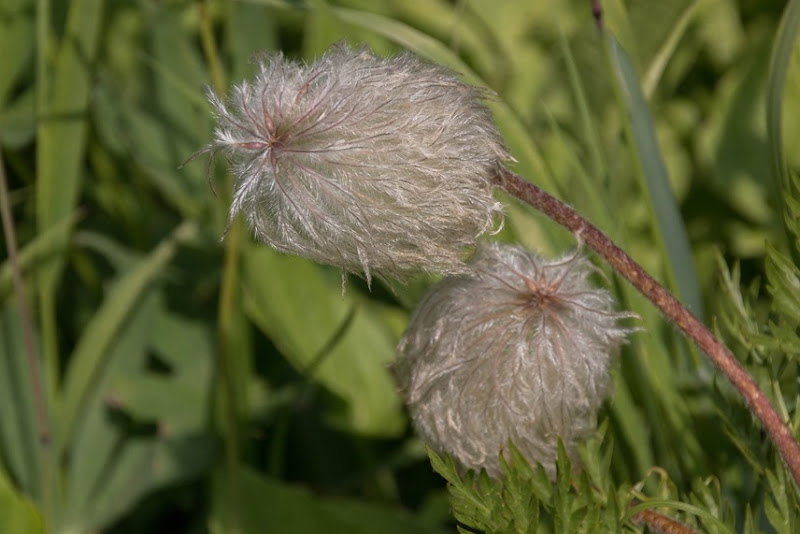 Jennie said that they looked like Cousin It from the Adams Family. 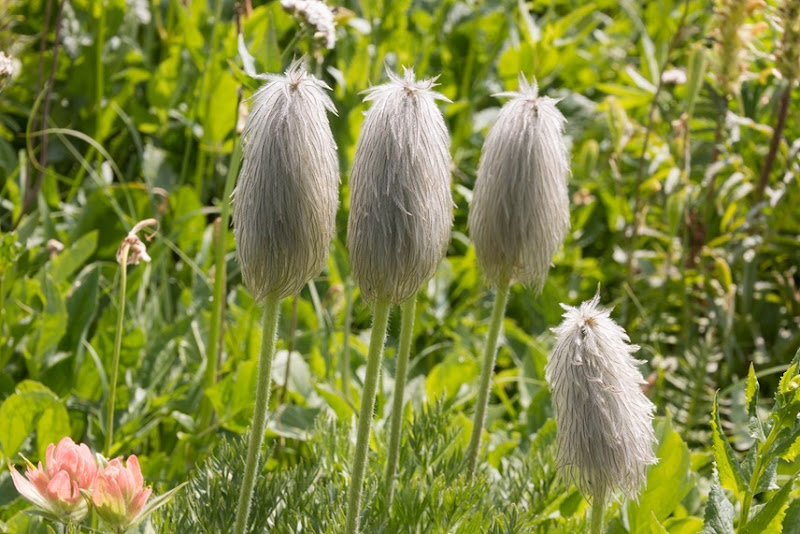 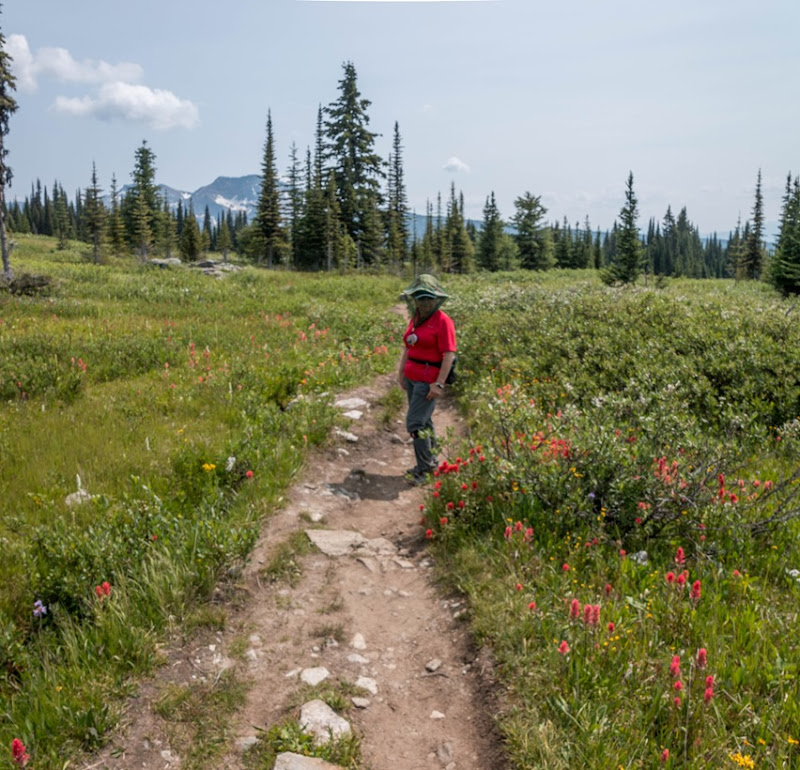 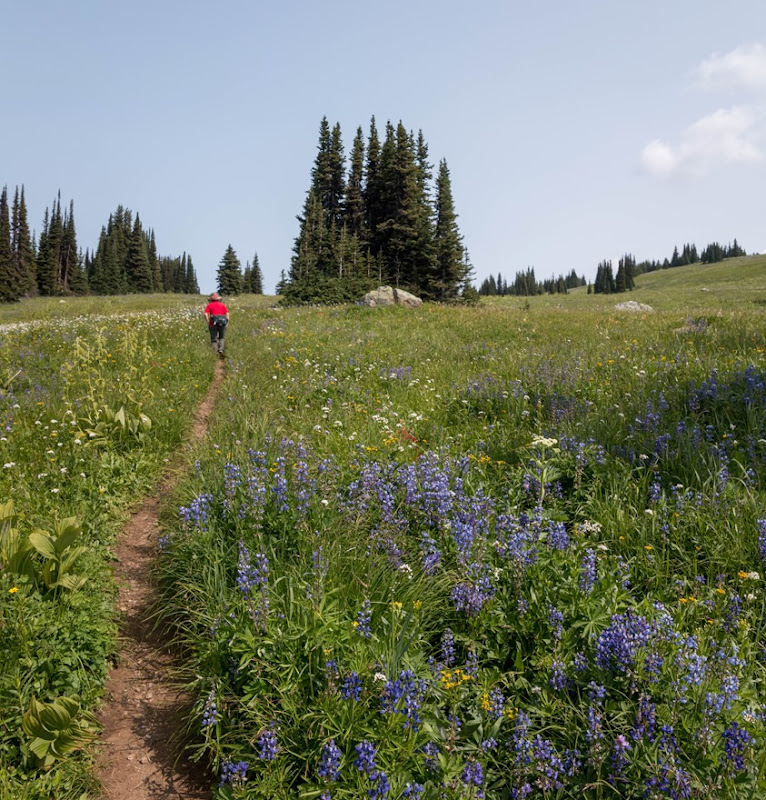 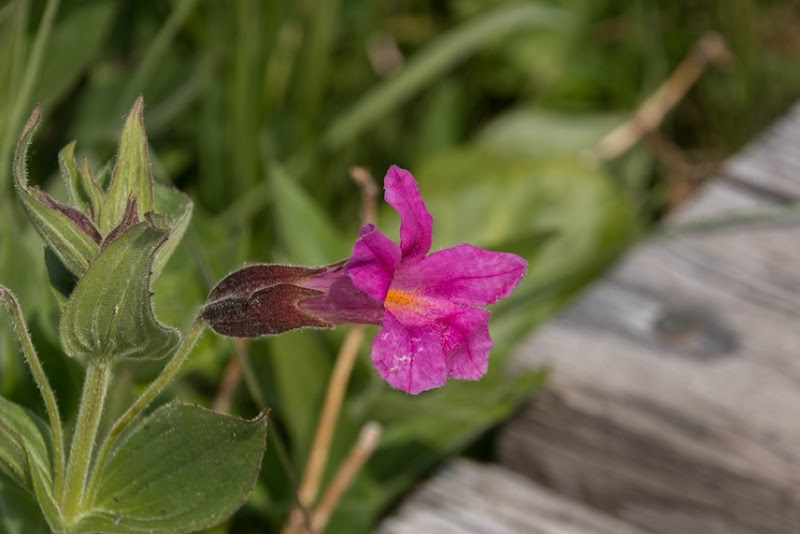 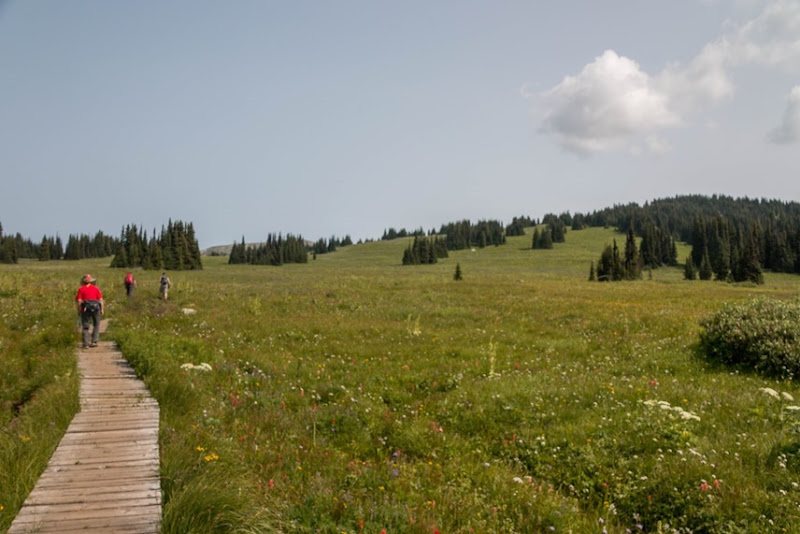 Unfortunately it was a rather hazy day. There were some mountains off in the distance, I think, 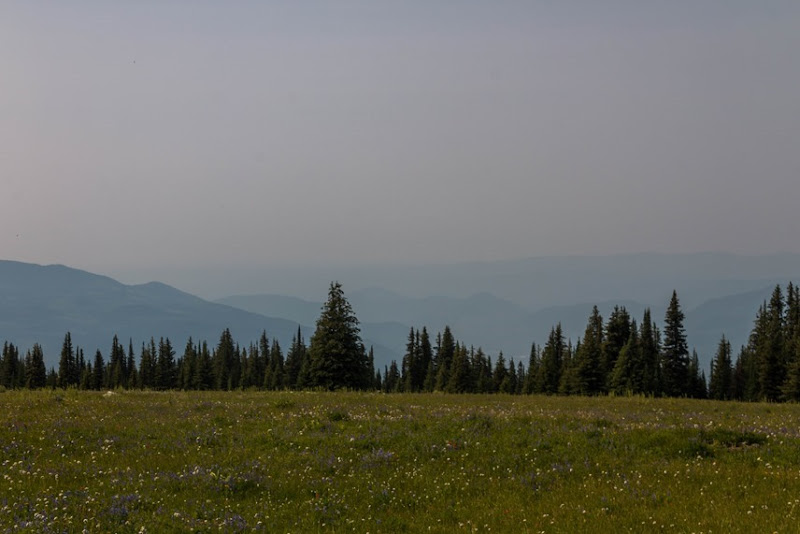 Partway through the meadows there was this clump of trees with a hollowed out area in the middle and this very small log cabin. A sign talked about a person who would stay up here for long periods of time and use the tiny space as his home. 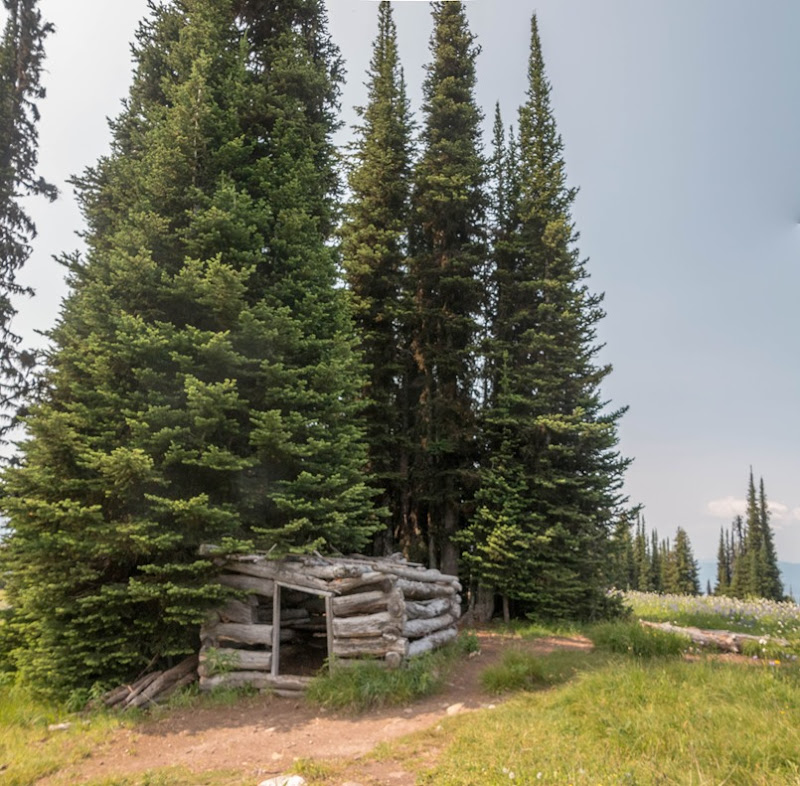 There was also an outhouse here, which was very convenient on the way down after having lunch. 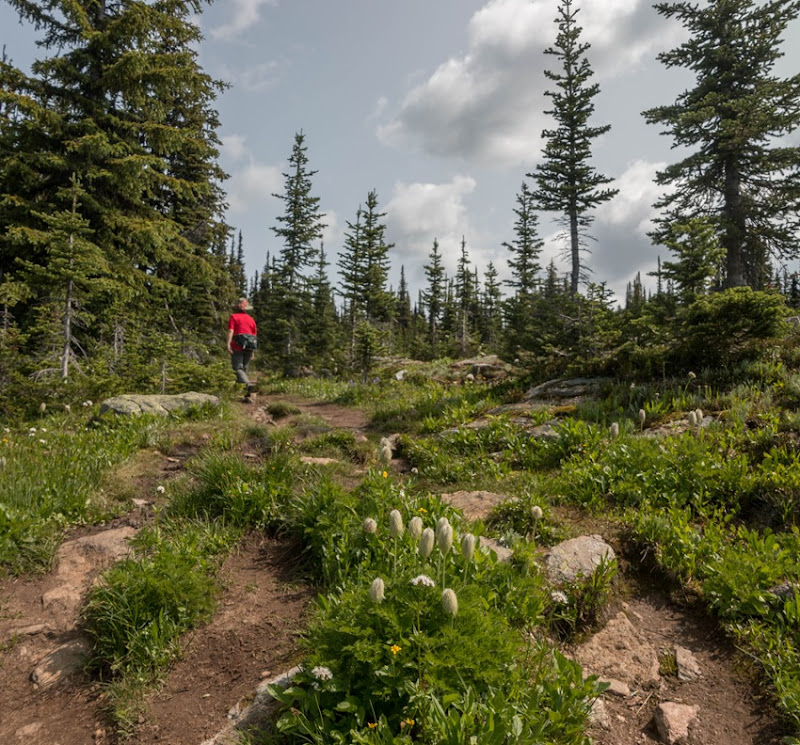 As we got higher the flowers gave way to rocks and heather. We also got a peak at some of the mountains around us. 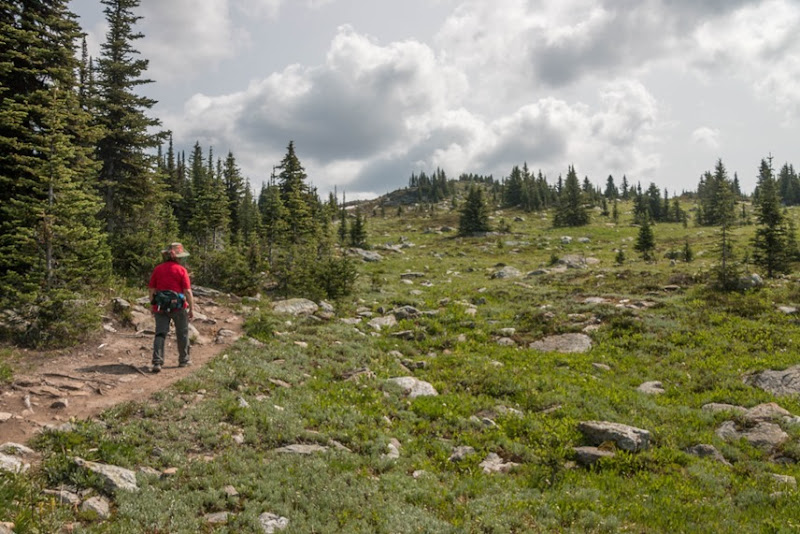 There was a short side trail that took us to a viewpoint of the deep valley beside us. It was a good lunch spot. 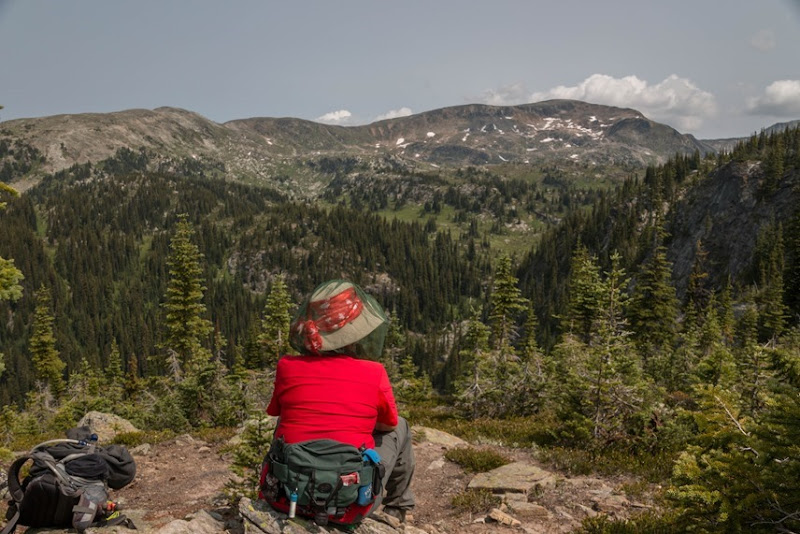 There was some colour in the mountain top across from us. 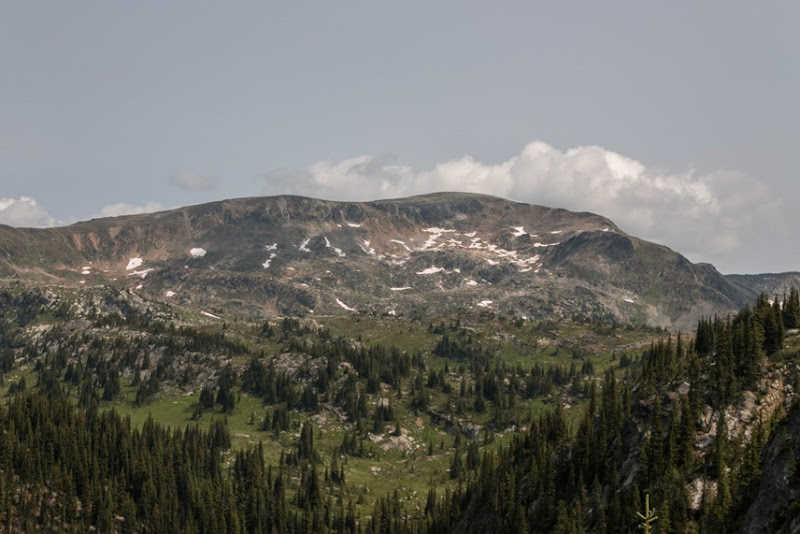 This grouse and her chicks walked right across the path in front of me and could not have cared less that I was there. 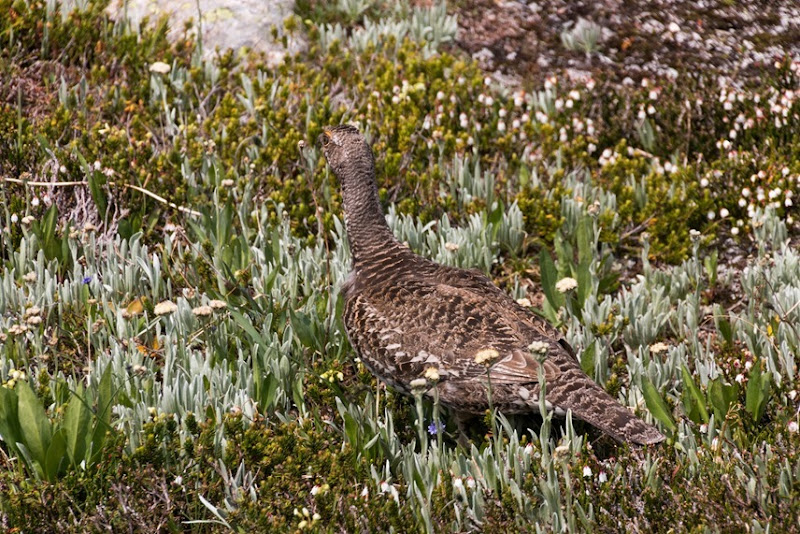 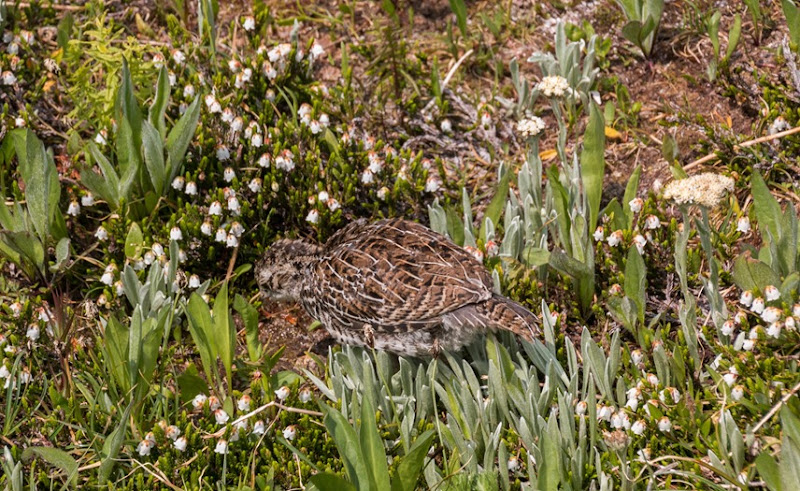 We came to a guided tour group playing in the snow.

And a little father on there was a nice rocky outcrop perched on the ridge that seemed like a good place for a look. It had a great 360 degree view. 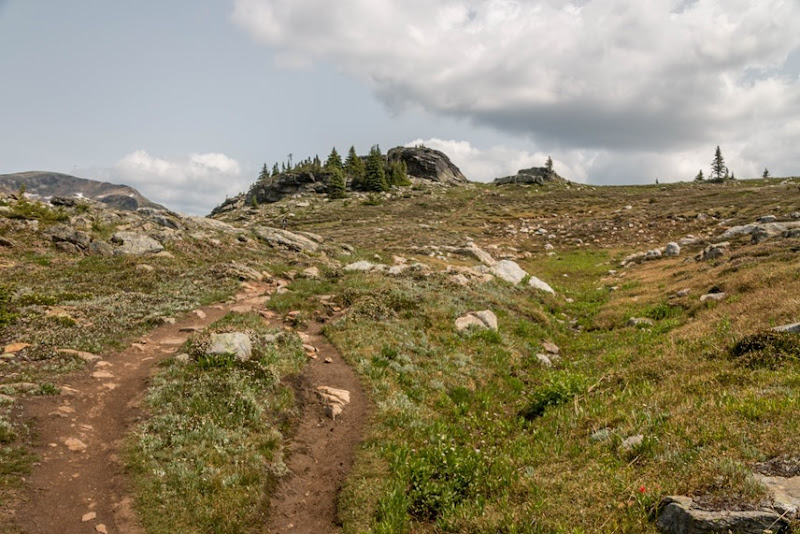 Looking down on the lakes from the rock. 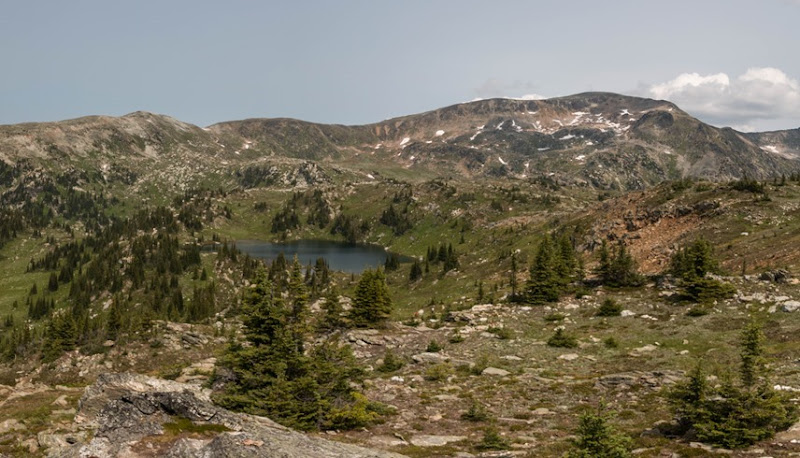 Looking back down into the park valley. 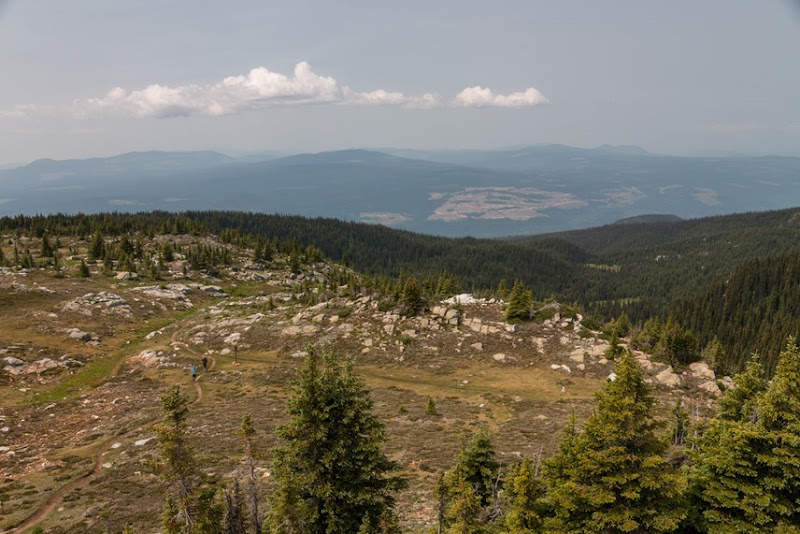 The top was just a bit farther up. 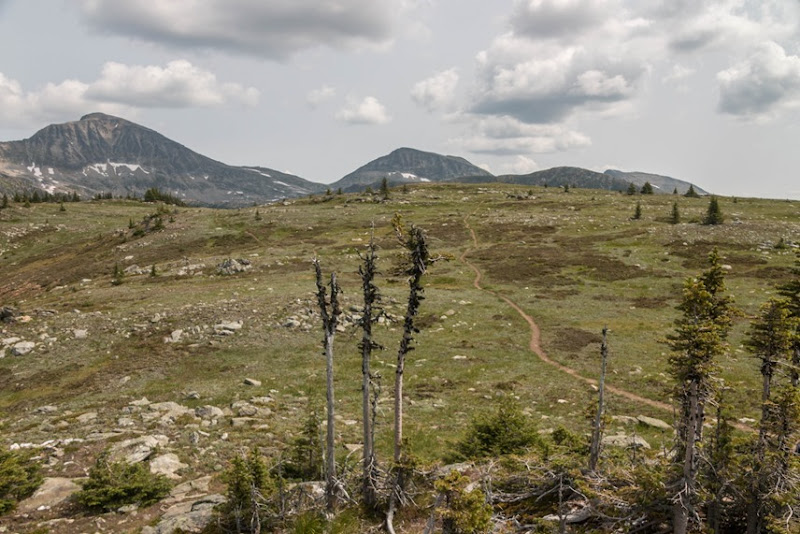 At the top there was a cliff dropping down into a deep valley.

And the final photosphere.

From here, if you have the skills you can hike anywhere. In the left side of the picture below you can see two guys continuing on to who know where. They both had huge packs so they were prepared.

Looking back at the rocky viewpoint. 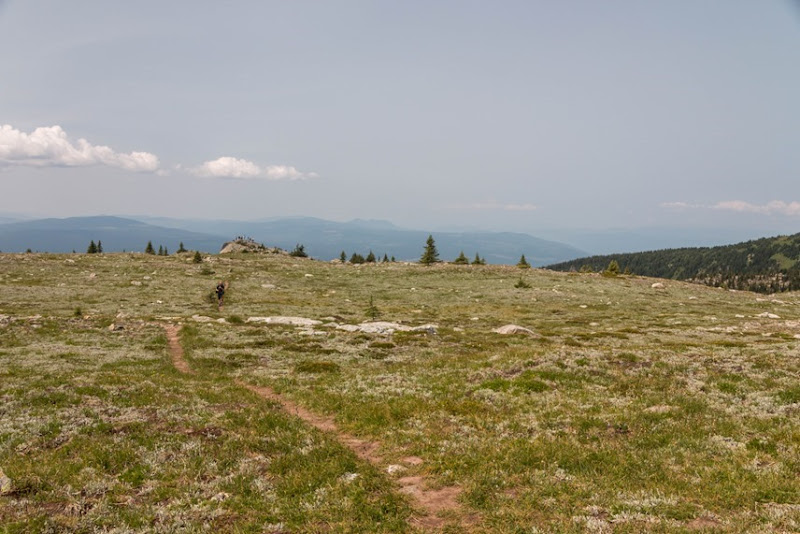 The tour group had arrived. 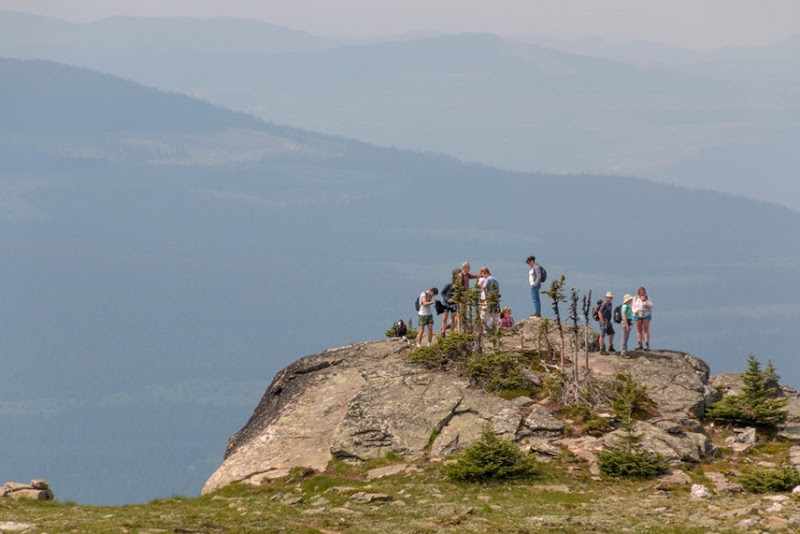 From here we turned around for the long trek back to the car. 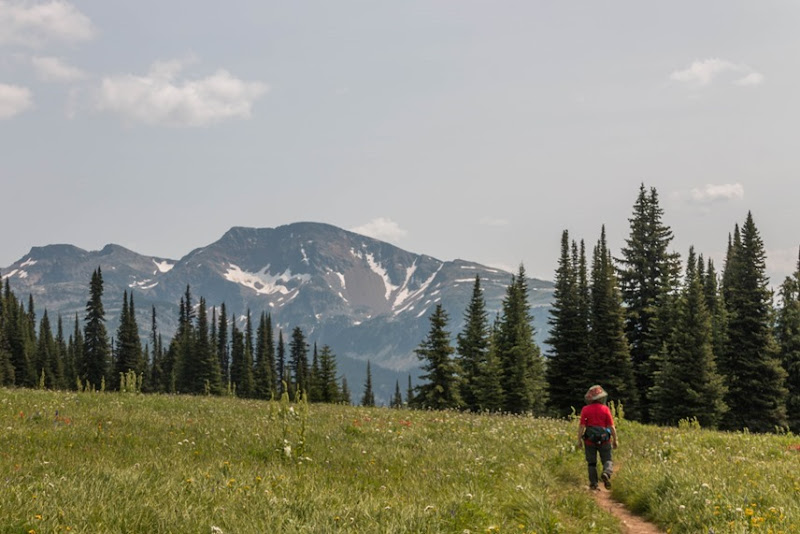 Down was certainly a lot easier. We were pretty tired and very glad to sit down in the car but we were not completely wiped out.