It’s kind a negative post but that’s how I feel. I apologize in advance.

Yesterday we made the move to the Viewpoint RV Park near Salmon Arm. It was an easy drive following the river valleys of the North Thompson and then Thompson Rivers so no big hills to climb or go down. It was a nice change. 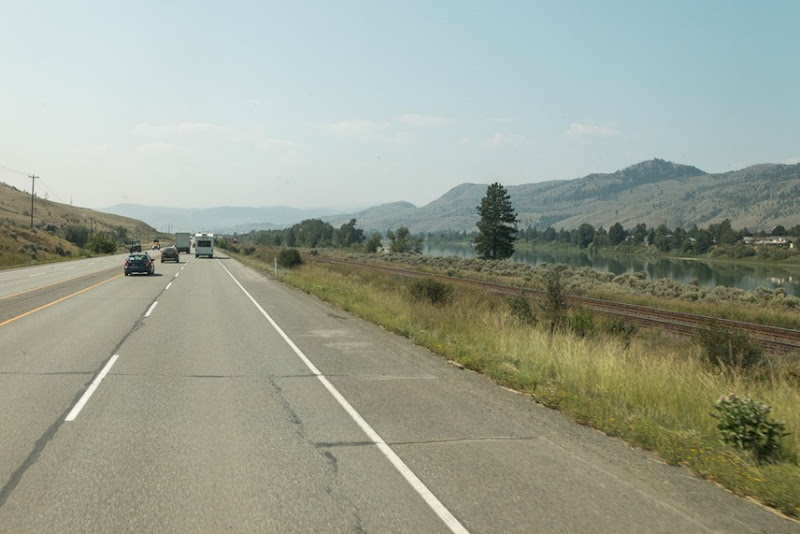 Then along the shores of Little Shuswap and Shuswap Lakes. 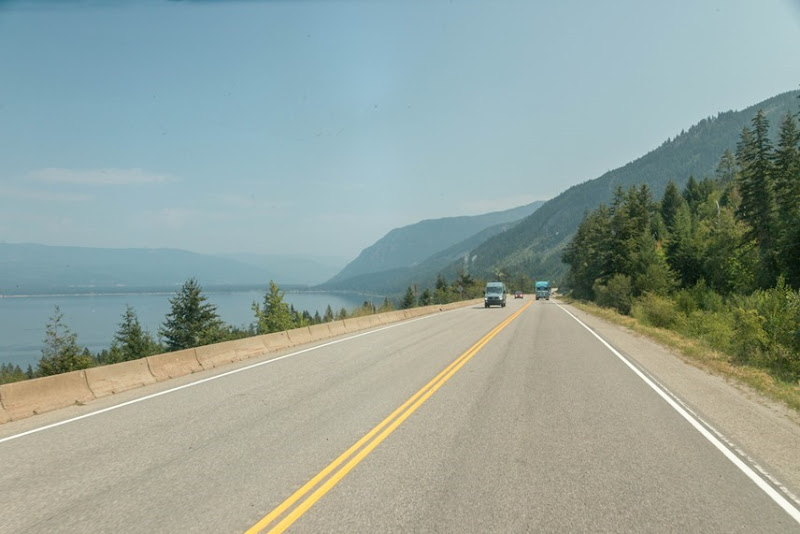 To be honest I am not sure why I planned this stop. I think it was the last one I did when planning the whole trip and really didn’t put enough effort into it.

First, there is the RV park. It is called Viewpoint but there is no view. The Trans Canada Highway is right on our doorstep and we are right at the bottom of a steep hill. This means there is a constant stream of trucks making a lot of noise either going up or coming down. The traffic never lets up, even late at night. Just on the other side of the highway is a CP Rail line.There are not a lot of trains per day but the ones that go by literally make the ground shake. The RV sways so much that you feel it in your stomach.

The park only has 13 sites,4 of which are tent or small trailer only. This is most of the park.

I felt bad for the guy beside me as I really hemmed him in. 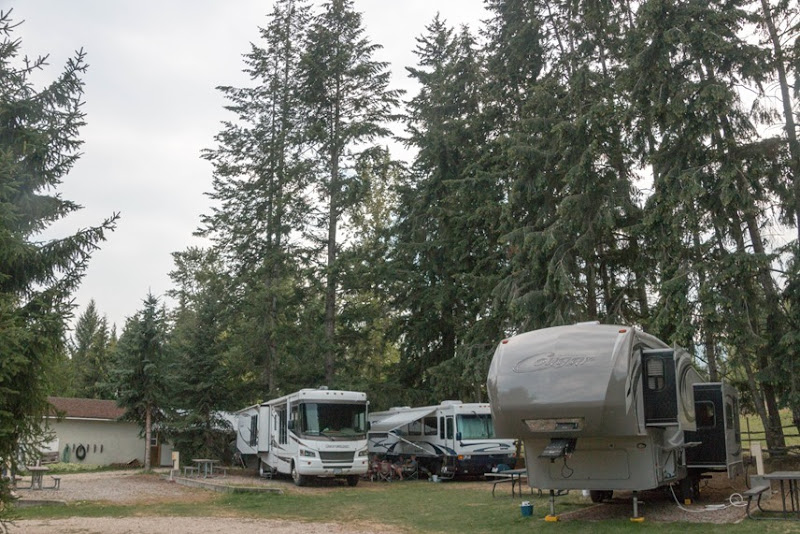 Out at the front, this is the only view. Right across from us, it is all trees. 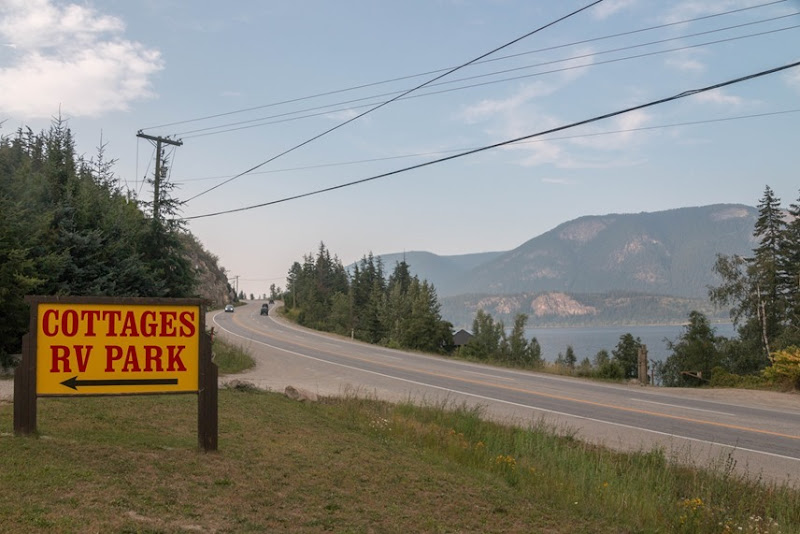 One saving grace is that there is good internet. For the last few weeks there was no cell coverage and the internet was terrible.

Second, after being in the wilds of Bella Coola and Wells Gray Park, coming back to “civilization” is kind of depressing. Salmon Arm is not a huge town but with the highway running through, it is always busy. Just getting out on to the highway from the RV park can be a challenge because there are seldom breaks in the stream of cars.

Third, coming here in the middle of summer was not a great plan. I know it is hot everywhere but this is the low country of BC. I should have planned to be up higher and cooler. To add to it, we are supposed to get rain most of the week but it will still be hot.

Fourth, there really isn’t a heck of a lot that we are interested in doing around here. This is basically cottage country with things on the huge Shuswap Lake dominating most of the activity choices. Any of those things, I could do for free at our cottage. To top it off, 3 of the places that were at the top of my list have been closed due to flood damage in the spring.

Today, we went over to Roderick Haig-Brown Provincial Park and to continue the negative vibe, I think I picked the most boring of its trails.

The park is long and narrow as it follow the Adam’s River down to Shuswap Lake. It’s main focus seems to be the late summer and fall salmon run. 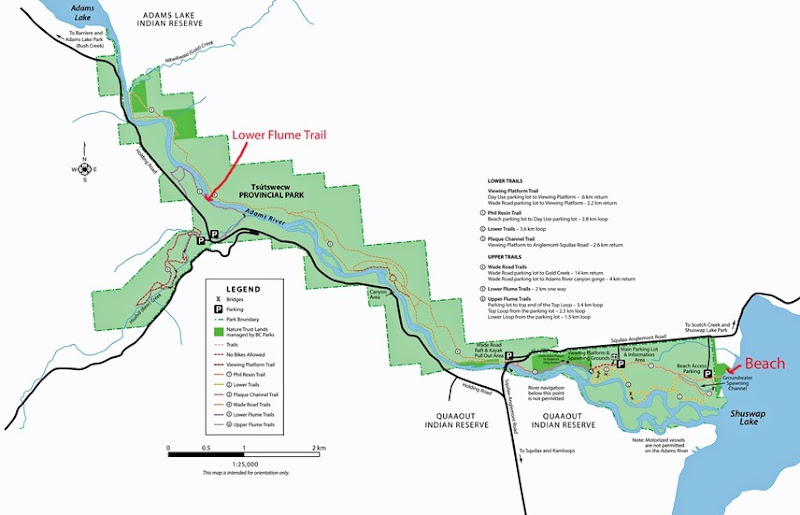 The park website said the the “River Loop Trail was closed due to flooding”. Since the map doesn’t show a river loop trail I assumed it was the the ones going up river to the Canyon Area in the middle of the map. Now I am pretty sure they meant the area down by the lake. So we missed the canyon.

We headed to the northern section of the park. I had read a blog post that talked a lot about the Lower Flume Trail and barely mentioned the Upper Flume Trail so we did the lower trail. I found out later that the upper trail had a nice waterfall.

The Lower Flume Trail was basically a 4 km flat walk through the forest and along the river’s edge to a small point where the river has a bit of a whirlpool.

The one thing that had attracted me to these trails was that the description said that it was a nice, cool place to go on a hot day. That at least was true.

The trails get their name because there used to be huge wooden log flumes, even over tall bridges, to take the logs down Bear Creek to the Adam’s River. Here is an example flume section with the more modern transport method roaring by in the background. 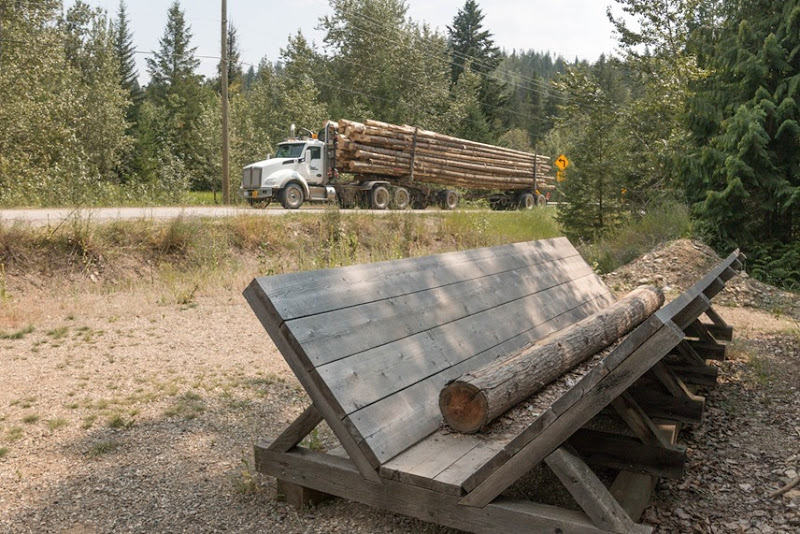 The trail picture were taken on the way back. 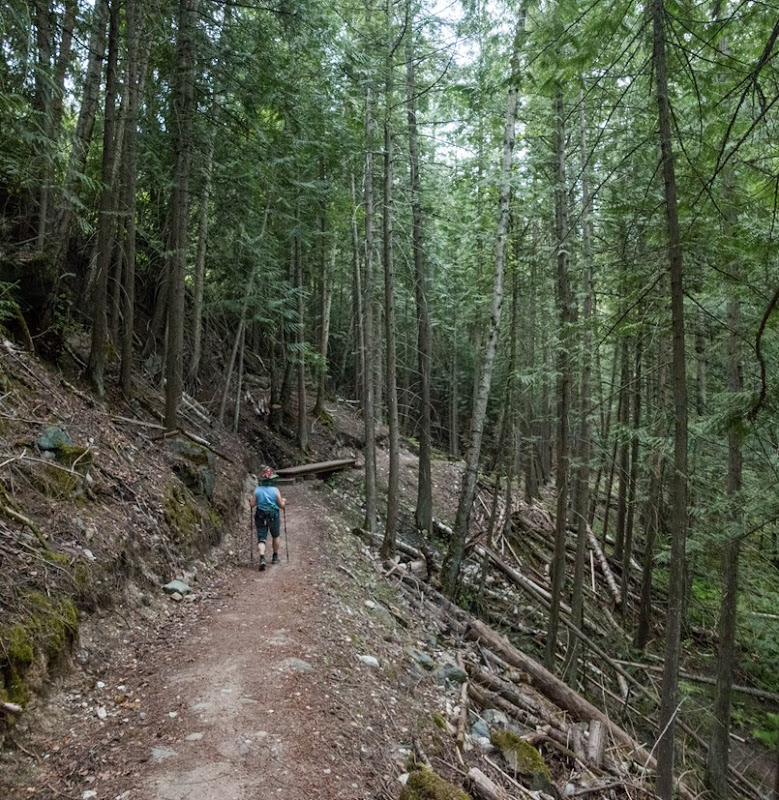 We crossed a couple of very new aluminum bridges. I assume some old ones recently washed away. 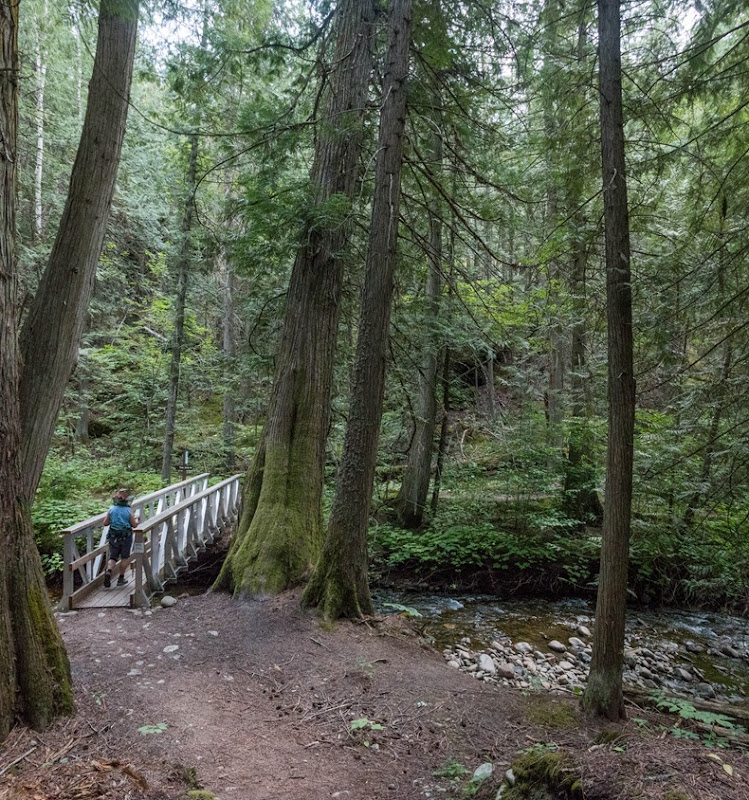 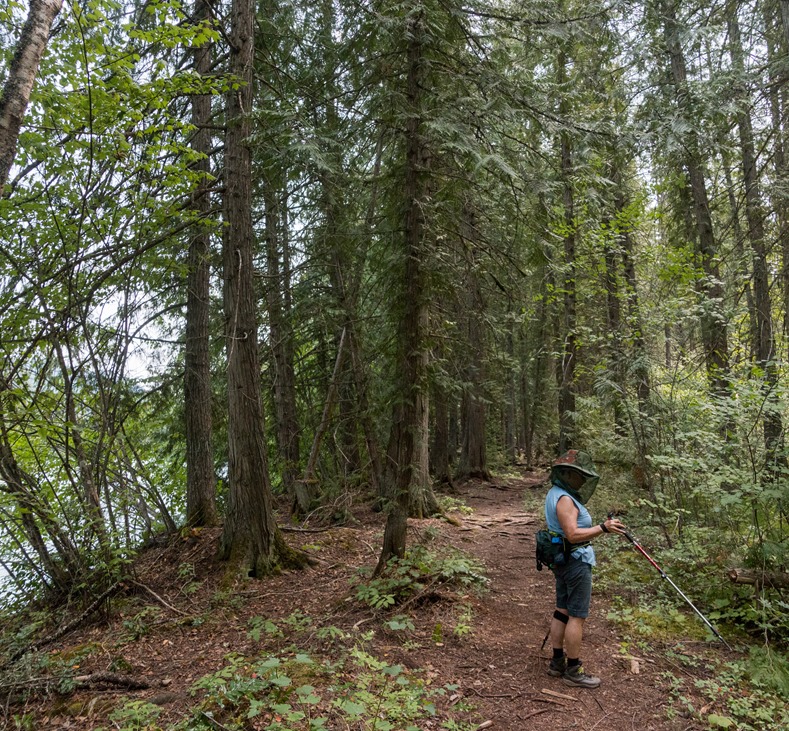 I had a minor scare on the way out.

We came over a small hill and I saw those dead branches, sticking up on the left, moving around quite a bit. Also, randomly, every few seconds I heard a very loud and deep thumping sound. I thought, “OK, What large animal is rooting around in the dead tree?”

Then I realized that the dead tree pointing at the river was under the tree with the branches. It went a long way out into the water, Every time a wave would hit, it would jump enough to bounce the other log around and hit the ground with enough force to make the noise.

The noise startled me again on the way back.

There was not much to see on the trail, just the wide fast flowing river.

At the end of the trail we came to a point that split the water flow. Part of it swirled swirled around into a small bay creating a beach and a slowing moving whirlpool. 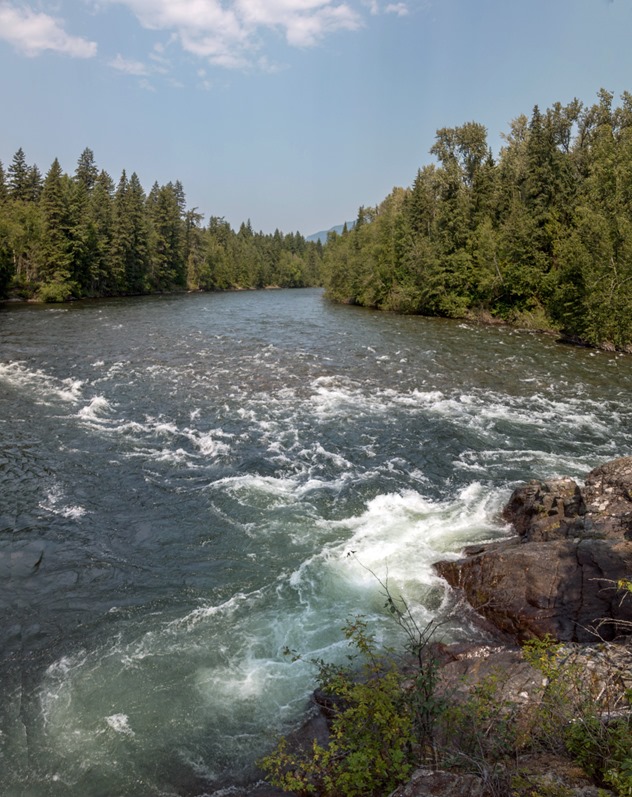 I tried to take a panorama but the stitching software couldn’t match up the moving water that changed position from shot to shot.

The beach and bay are just to the left of the picture above. 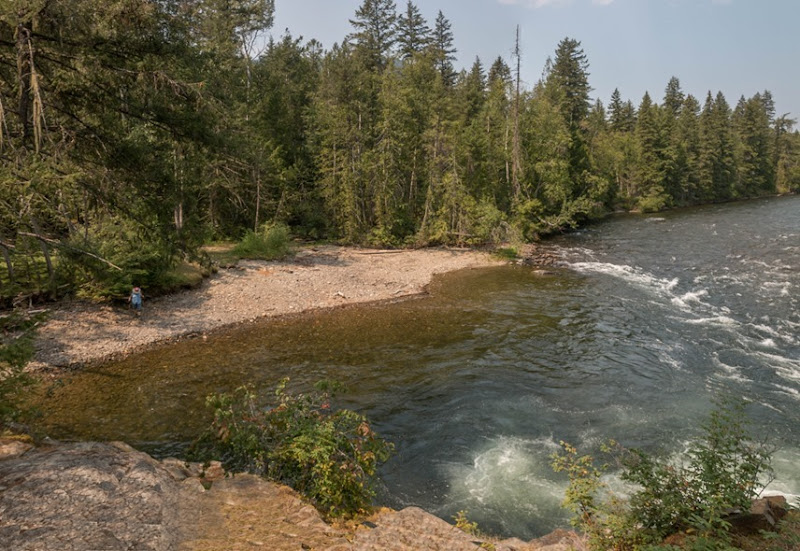 The photosphere did work,

Checking out the beach. 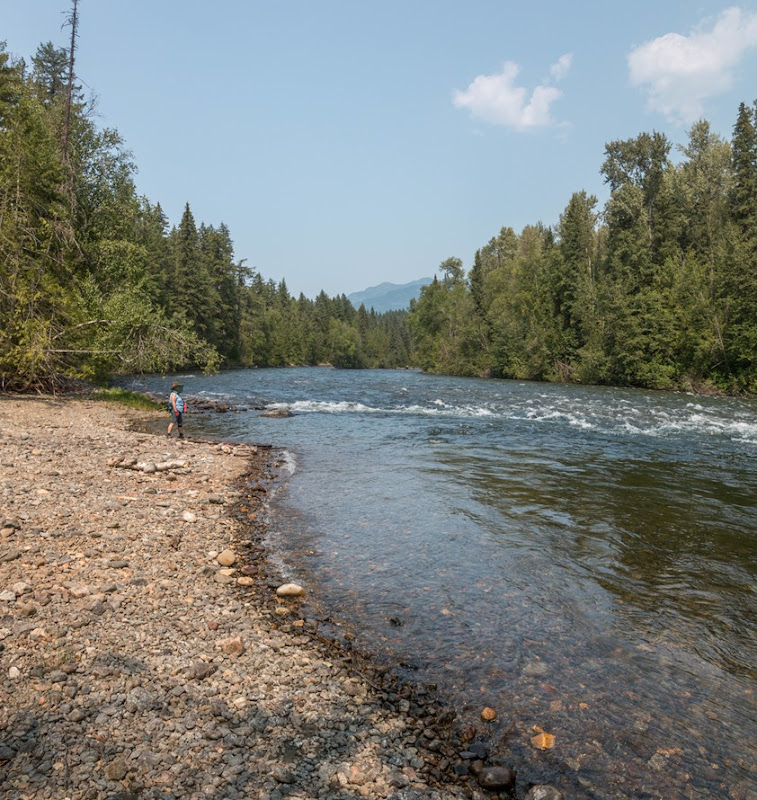 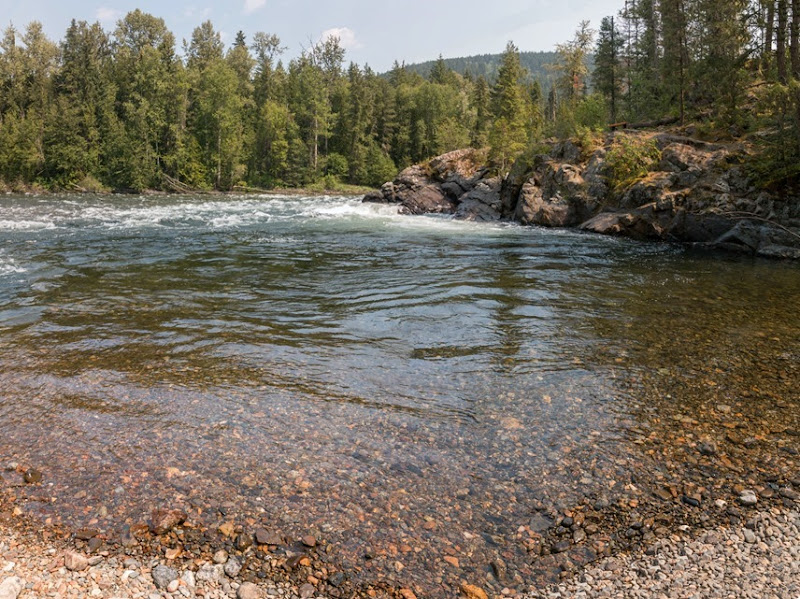 We headed back down the trail to the car.

We decided to drive down to the southern section of the park and have lunch on the beach we had seen marked on the map. I guess it is not used very much, as the dirt access road off the main road was not marked at all. It also had some of the deepest potholes I have seen in a long time.

After a very short walk we had lunch on the shore of Shuswap Lake. There were lots of powerboats buzzing around.

This evening a thunderstorm passed over us but it did not rain enough to be really useful. Rain good, lightning bad. We heard some pretty loud thunder. No more fires, please.