Normally I don’t mind travelling when the weather is not the best so we don’t waste good days inside the RV but today the scenery was so great, it was a shame that we didn’t have bright sunny weather.

The picture today are not good for several reasons. First it was a grey cloudy day with the horrible flat light that just makes everything look blah. Second the ones on the road were mainly through our windshield which is showing its age. And then once we got to Lillooet one of the settings on my camera got changed to set the resolution to the lowest possible value.

But just to remind us of the trip, here they are. 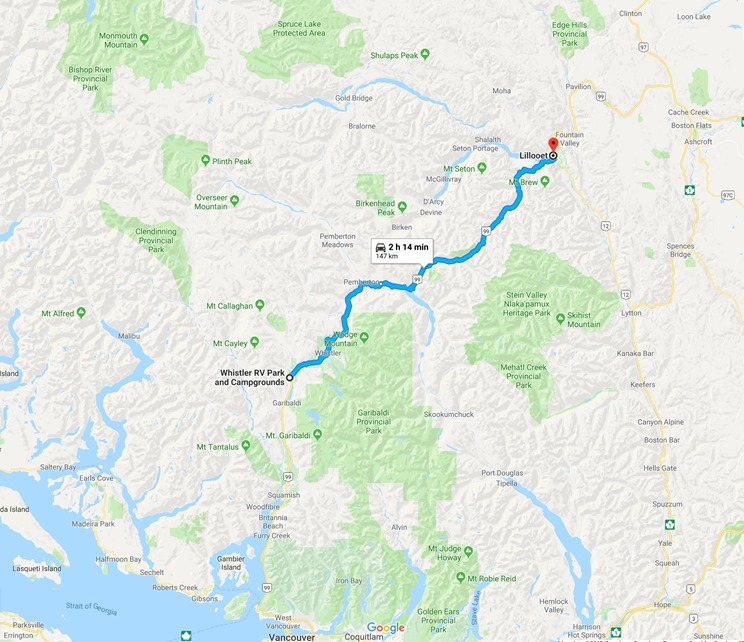 It was also a very tough day for the RV. Here is the elevation profile of the trip.

That steep climb really had me worried. You climb 1000 m or 3200 feet in about 14 km and from the graph you can see that it is relentless. The road is also very narrow and there are very few places to pull over and let the very annoyed drivers behind you get by.

To make things a little easier we disconnected the car at the bottom and Jennie drove it up behind me and then we reconnected at the top. Even doing that, at best I could manage about 30 kph and I think we used about 30 liters of gas just on that section.

I didn’t collect as many cars behind as I thought I would. At most there were 5 and I managed to find either a short straight stretch and a bit of shoulder to let them by.

Coming out of Pemberton the road is very flat but you can see the mountains in the distance that you know you have to climb. 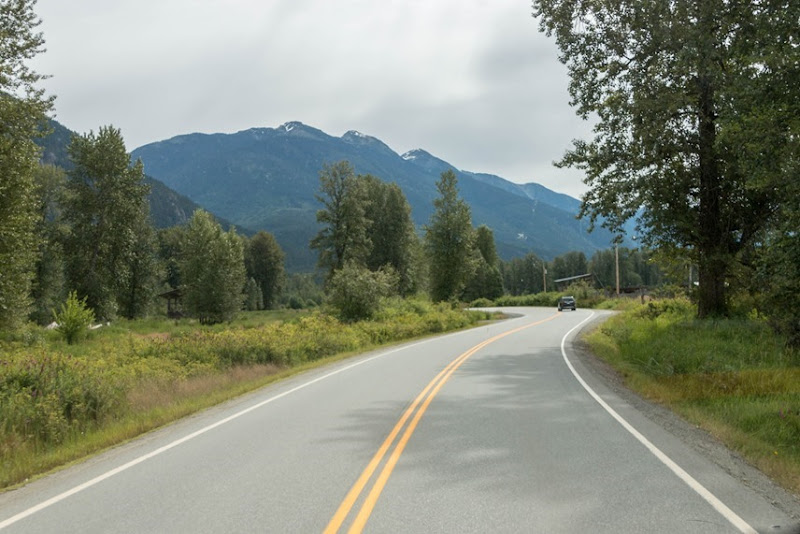 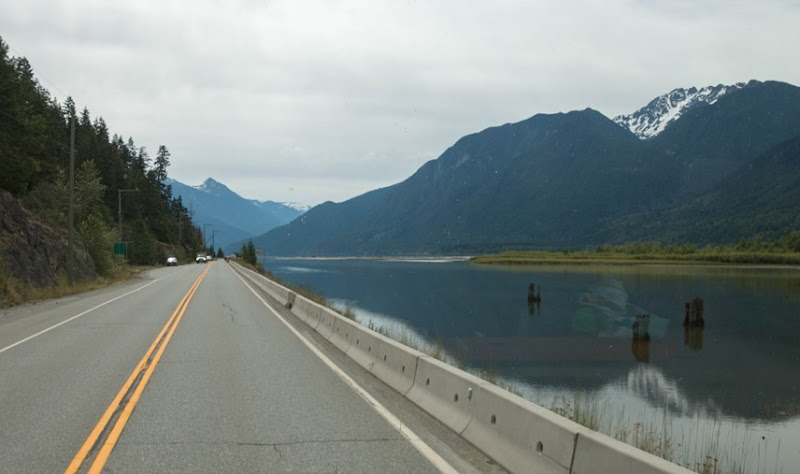 Not surprisingly there are no pictures form the climb. It was not particularly scenic and I was thinking of other things.

Once we were up, we drove in a wide valley. 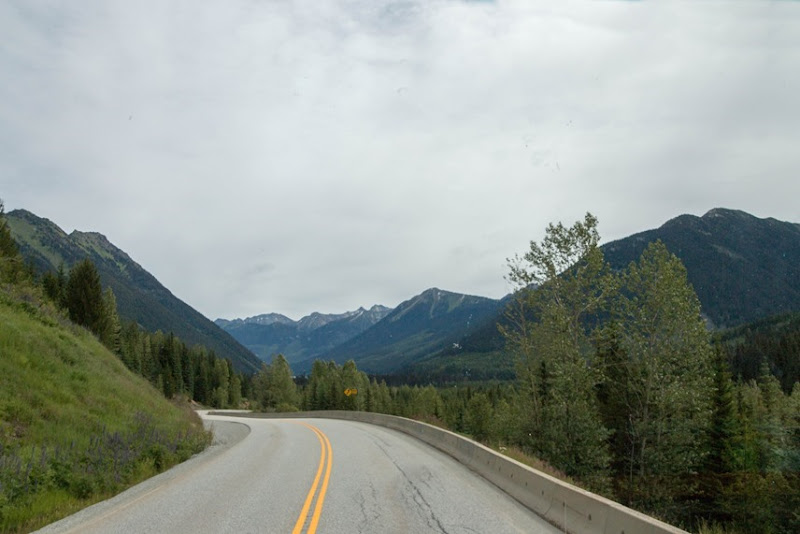 Then we were beside Duffy Lake for a while. 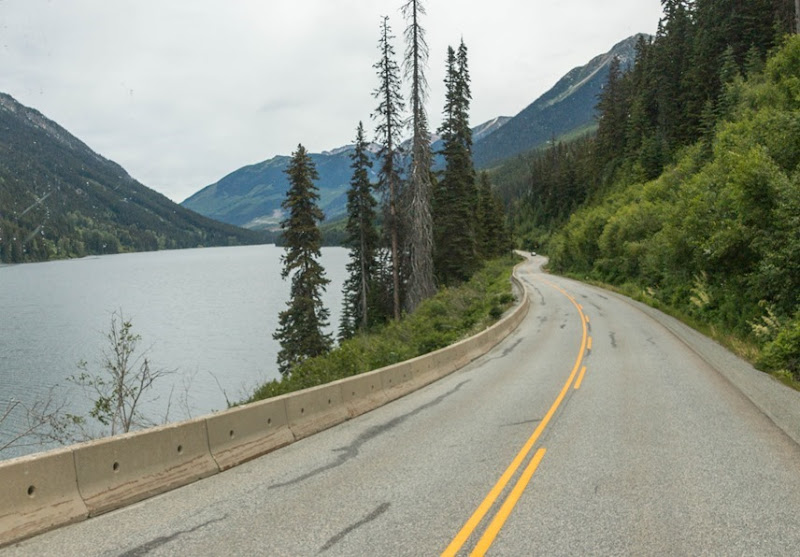 And then followed this rushing river. 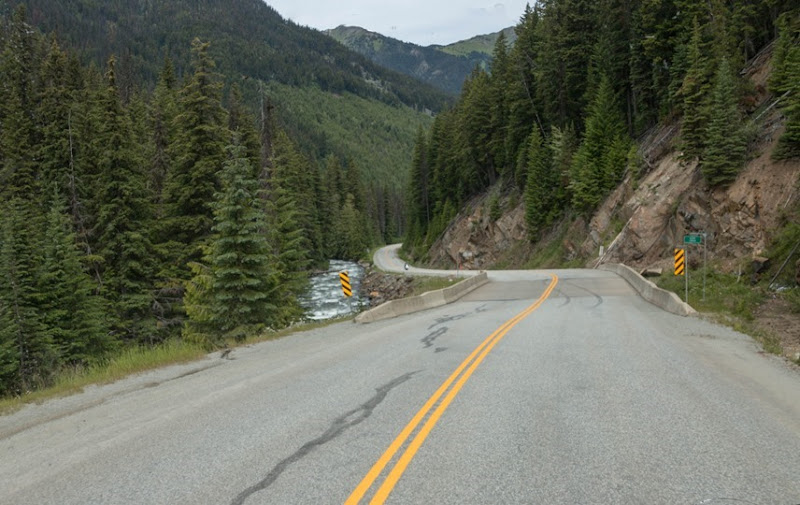 We had a couple of deer pop out but they were far enough away that it was not a problem. 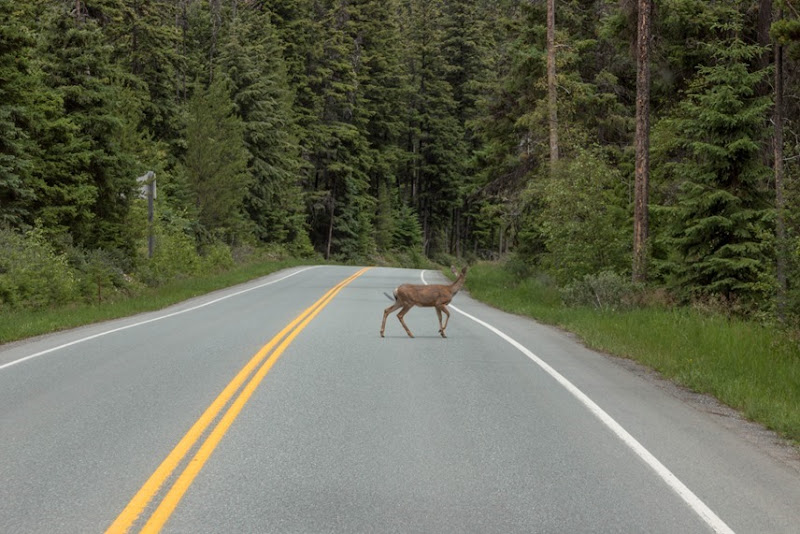 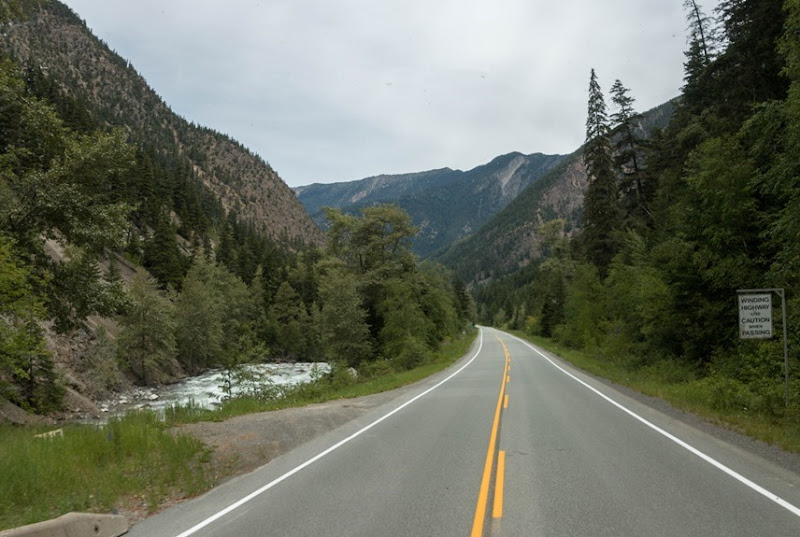 The walls around us got very high. 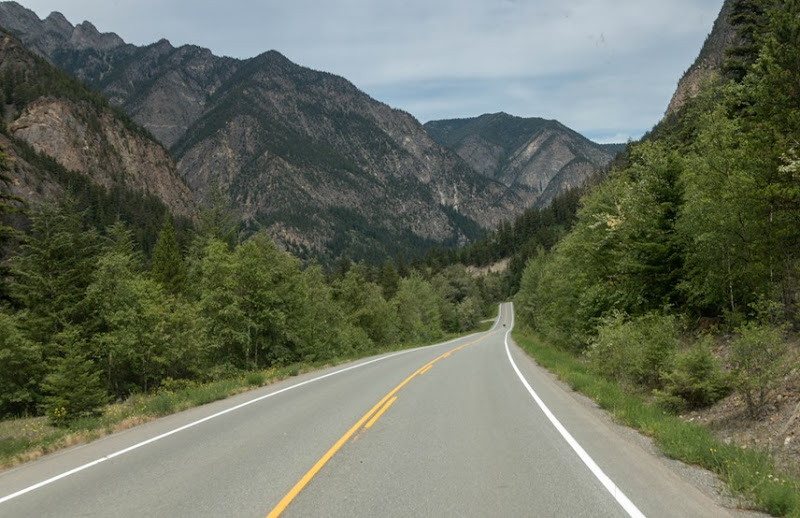 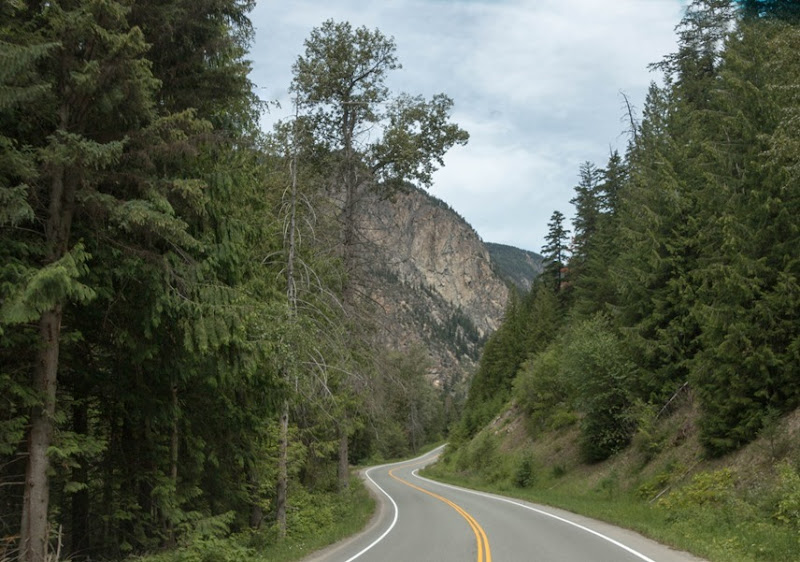 After another short climb, high above the river, we stopped at a nice wide viewpoint. 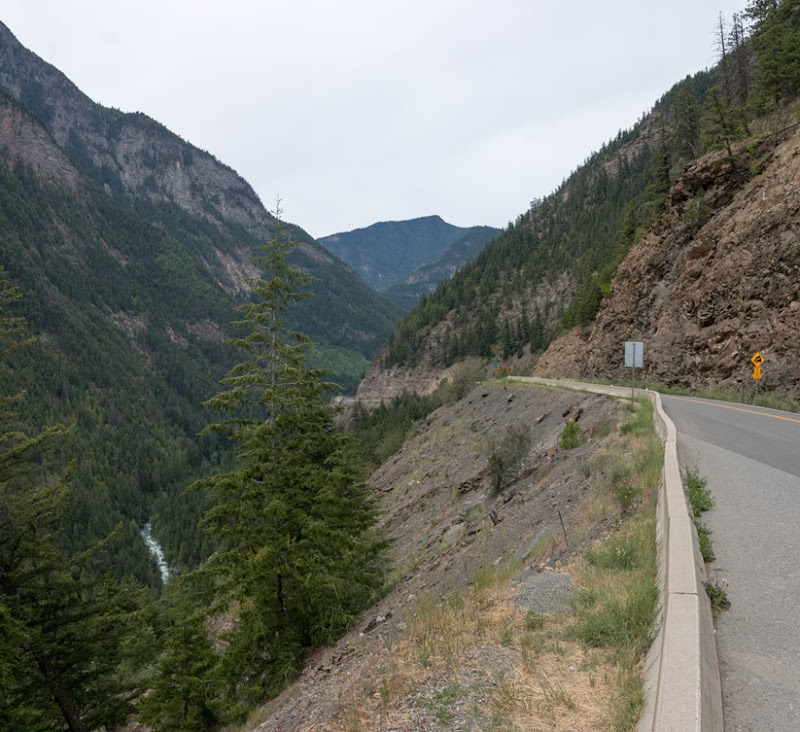 Then the final plunge to Lillooet. 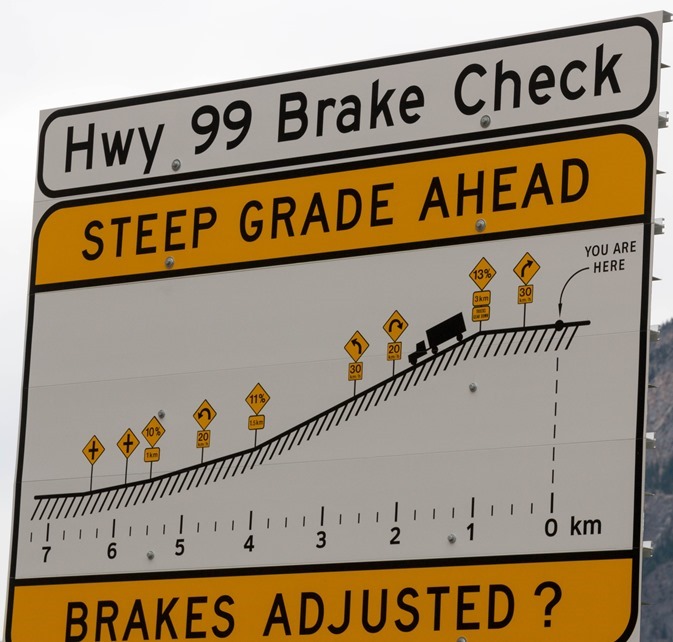 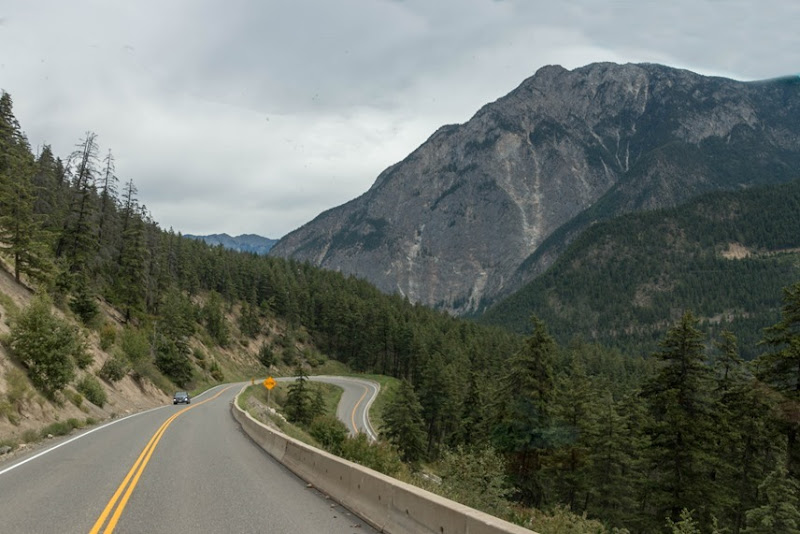 Looking back at the switchbacks with a ribbon waterfall off to the right. 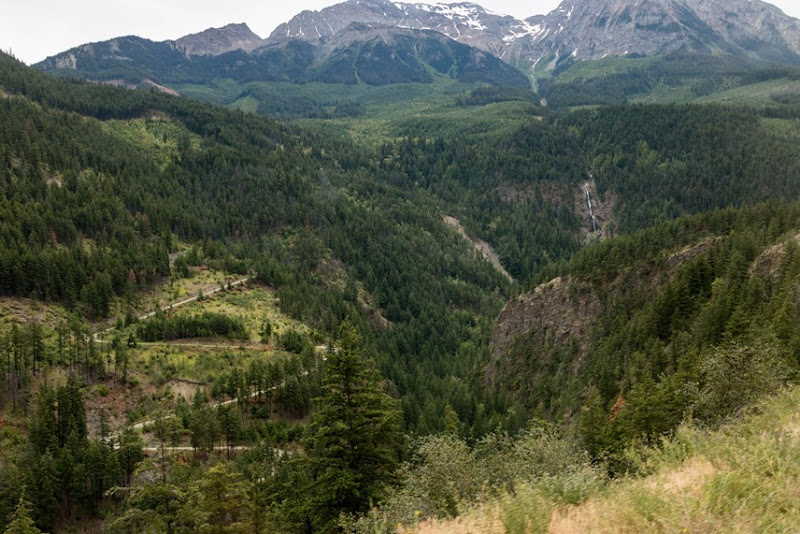 And Lillooet is in sight. 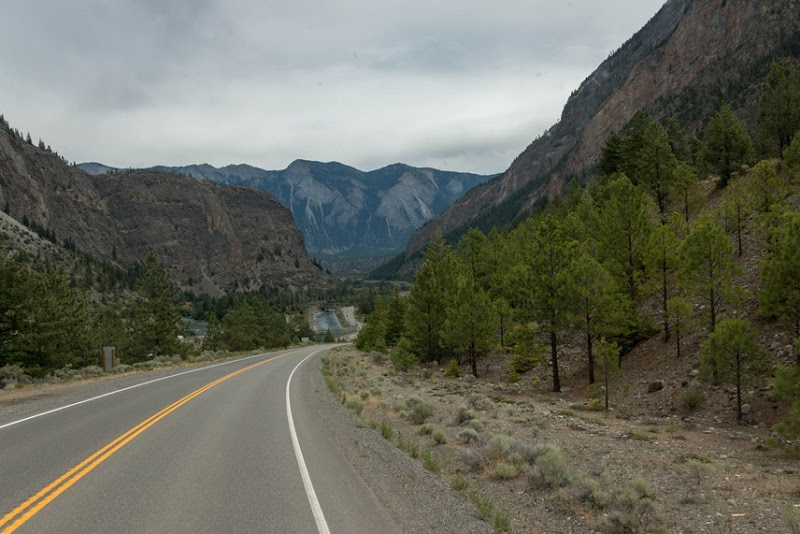 For such a tough route, it is very popular with the rental RV’s. I am not sure I would want to drive this road if it was my first time driving something that big. 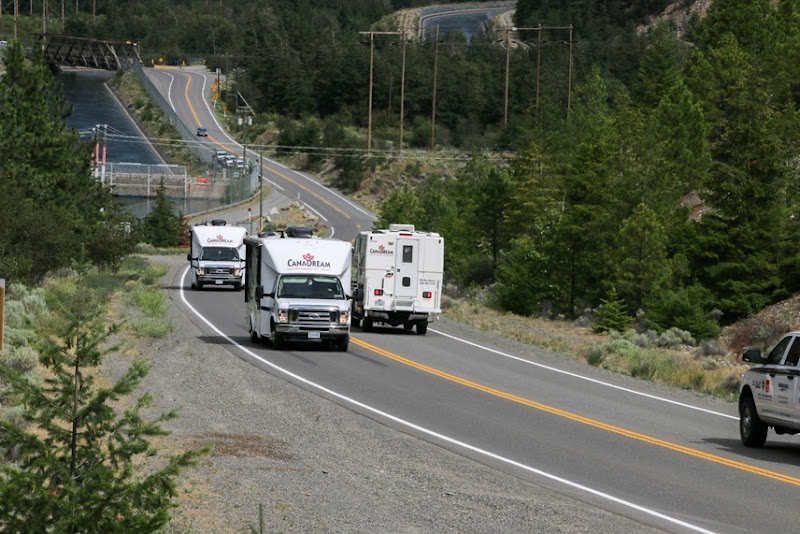 The Cayoosh Creek Campground is pretty basic and cramped. Since Lillooet is located in the deep valley created by the Fraser River the view around us is pretty good. 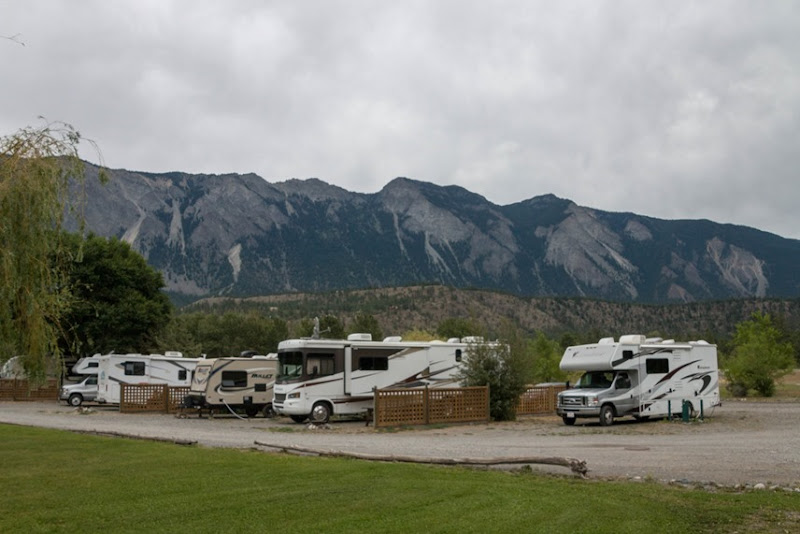 We drove into town and asked at the visitor’s center for some details on the drive I had planned to do tomorrow.

Then it was of to take a look at the Old Bridge. This is a very old suspension bridge that used to be part of the highway.

As I walked down for a closer look, this guy kept an eye on me. 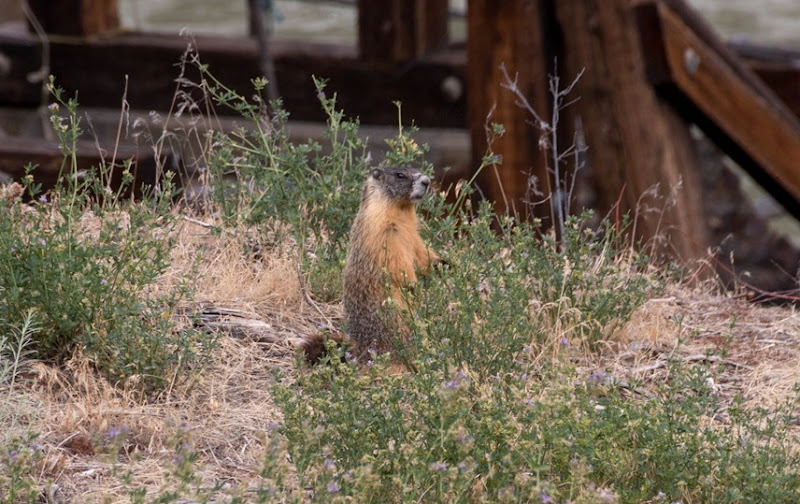 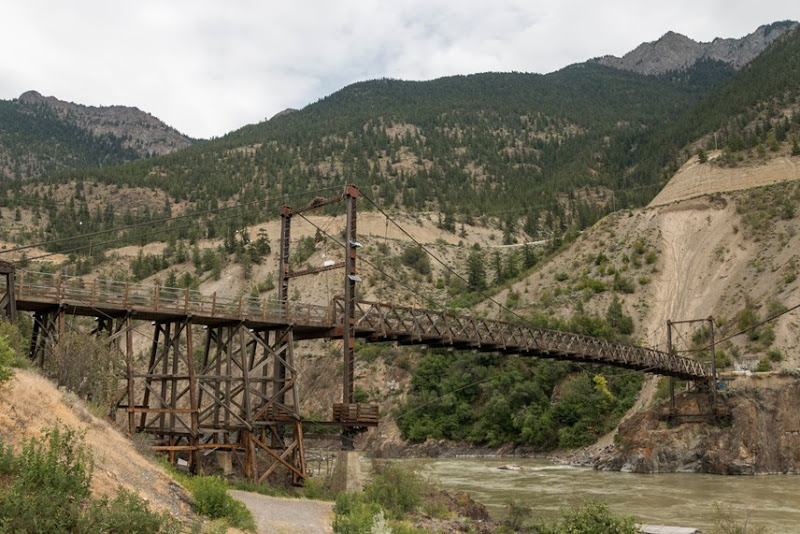 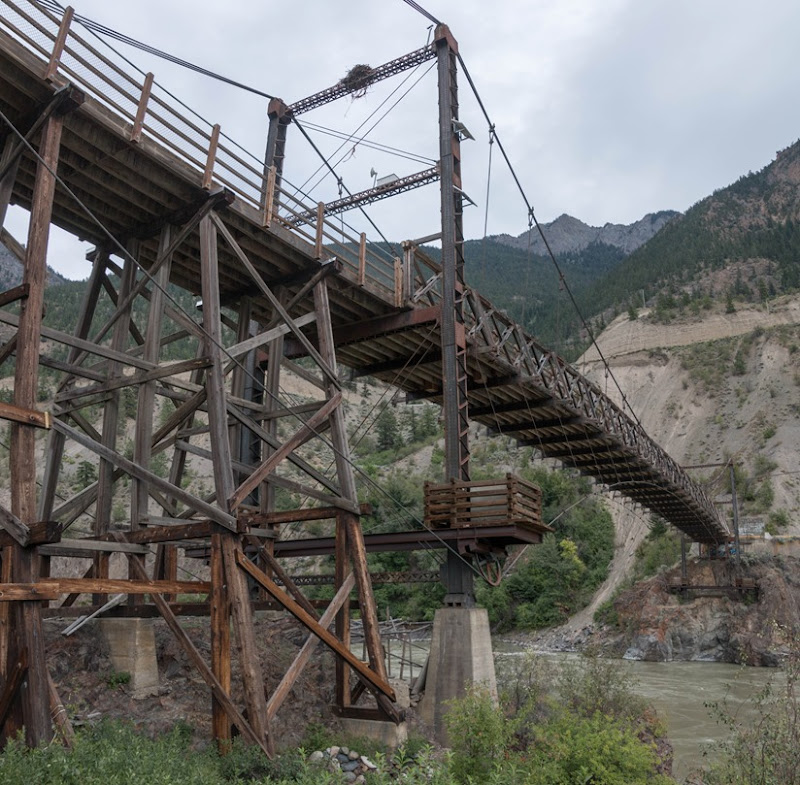 The upper catenary cable keeps the bridge up but there was also a lower cable, which I assume keeps the bridge stable. They had an interesting way of keeping it taught. The cable passed under a pulley on a carriage the could move up and down on the bridge pier. The carriage was weighted down by a large block of concrete. 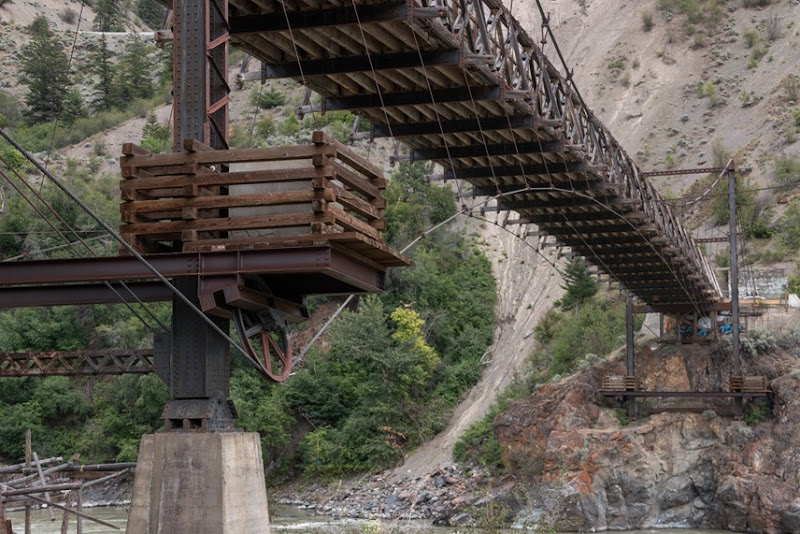 Next up was a drive just a short way north on Hwy 99 to a viewpoint overlooking the Fraser River. Here is where the camera setting changed. Besides being low res the colours just don’t seem right. 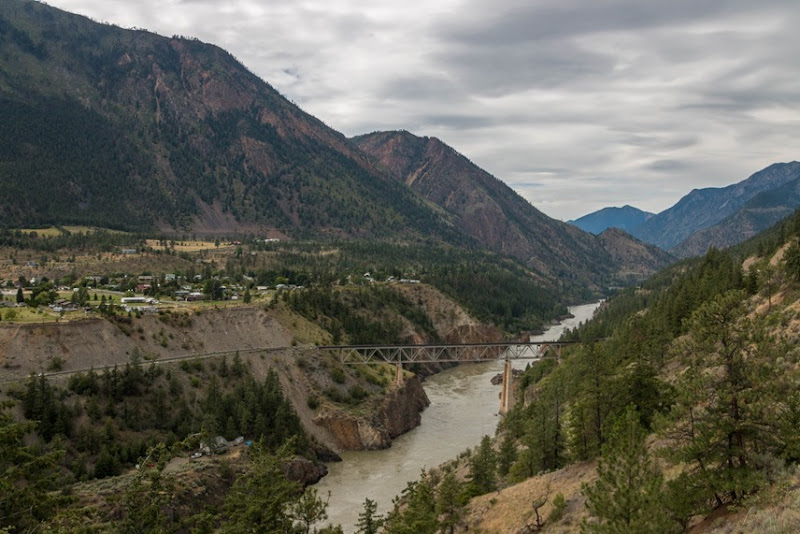 Looking south back to Lillooet. 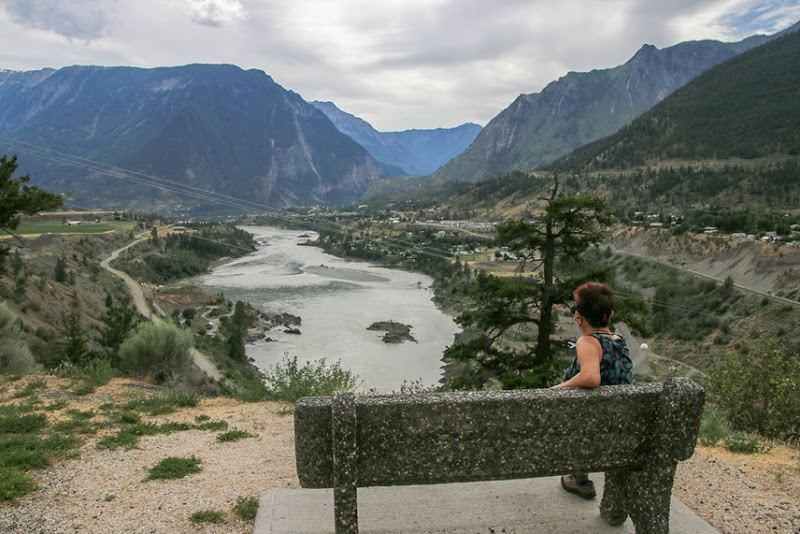 And down at the Old Bridge. 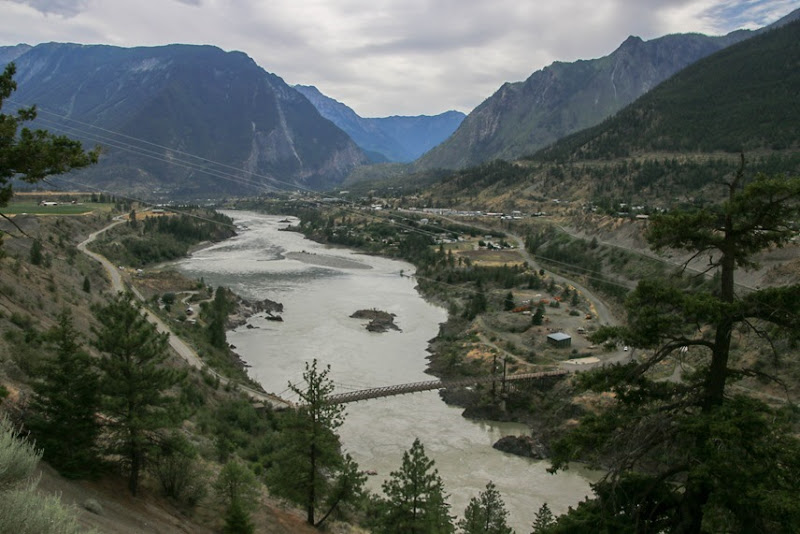 Finally we drove south of town to a viewpoint over Seton Lake that we had skipped in the RV. 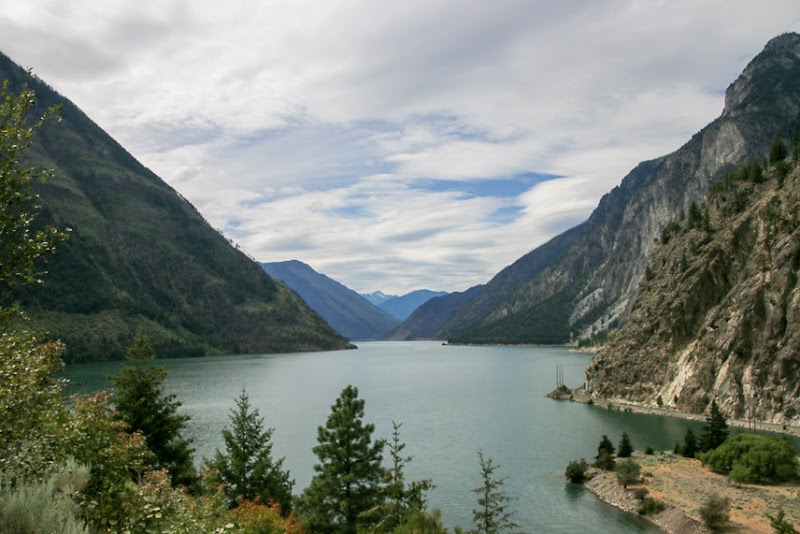 There is a train that runs along the tracks down at the shore. Unfortunately it is only on Friday that it does an out and back such that you can do a day trip. 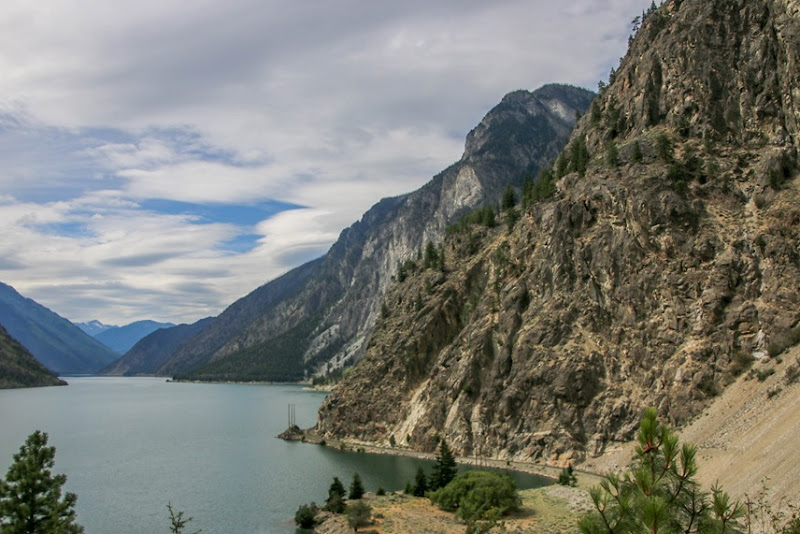 Looking down to Lillooet from here. We actually got a few minutes of sunlight. 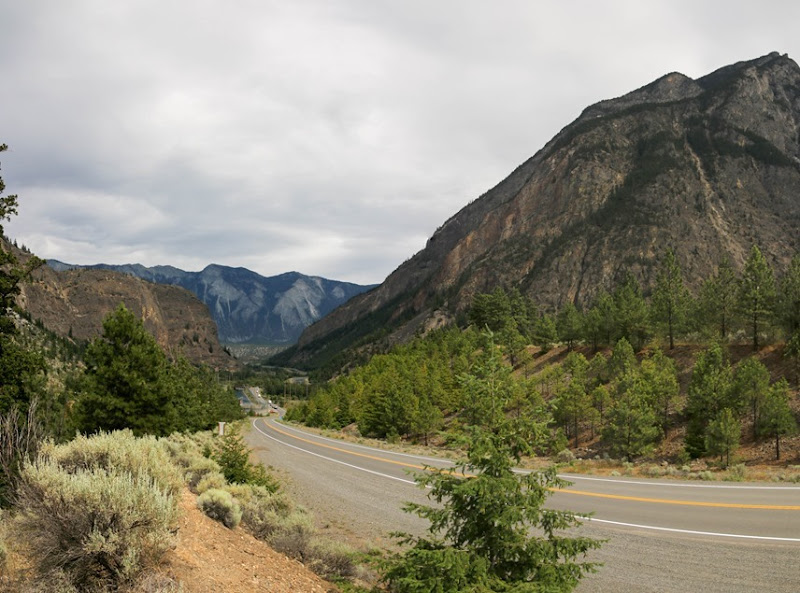 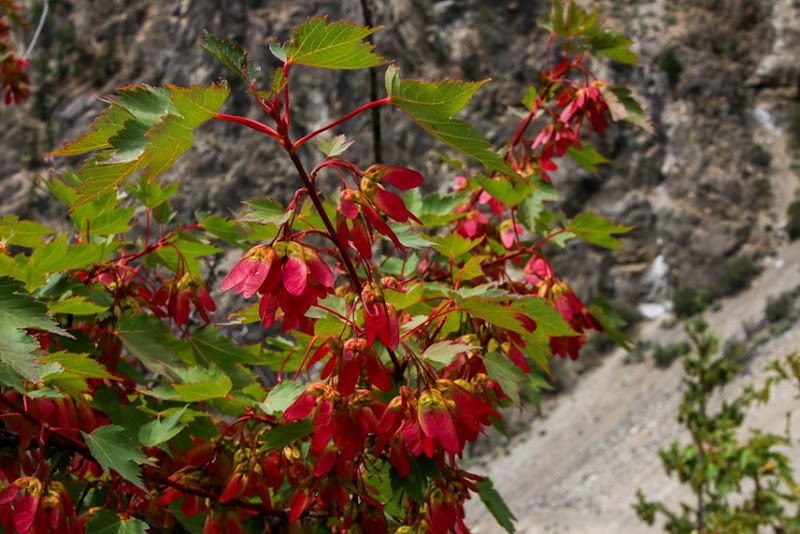 We drove down to the beach below the viewpoint. There were people in swimming but it was too cold for us. 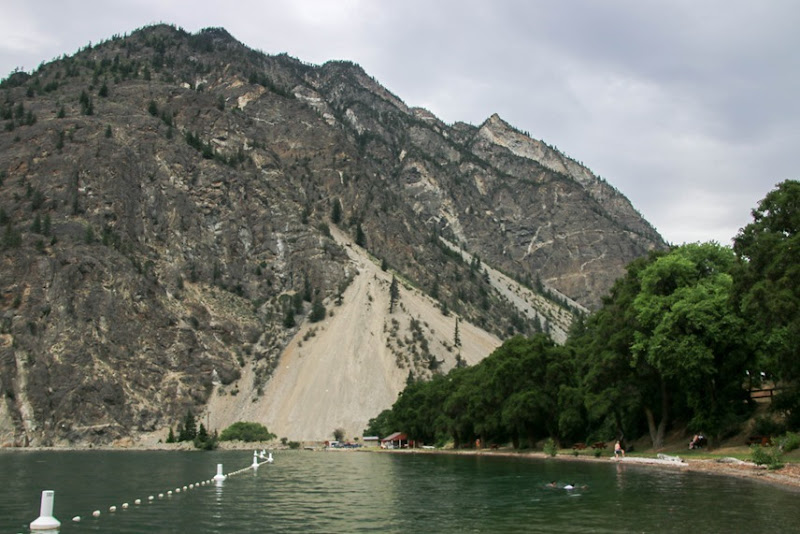 It seemed strange but there was a large fenced off section that split the beach in two. This outlet pipe for a small generating station was blasting water into the lake. 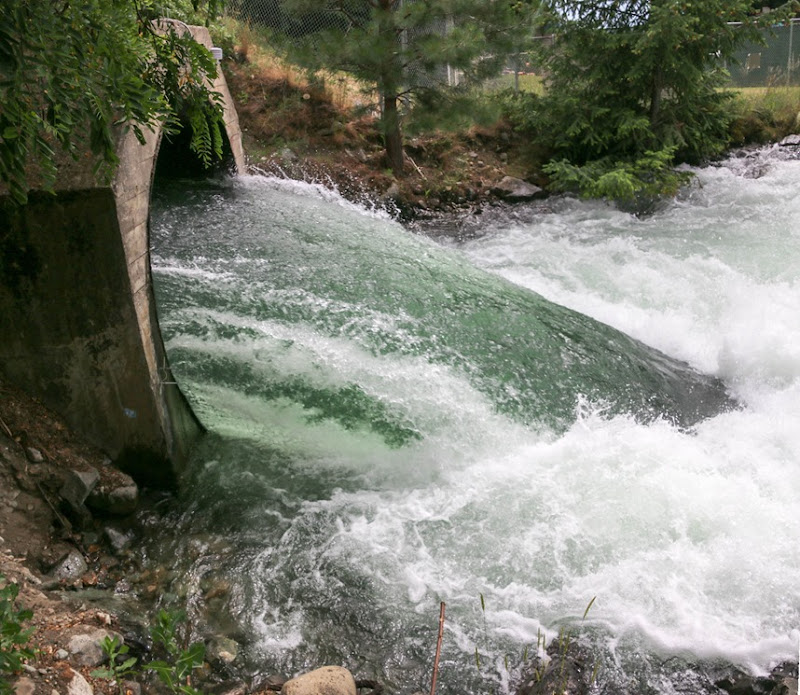 I had planned to do a long scenic drive tomorrow but the forecast does not look good.