As we drove through the park yesterday we noticed that one of the trails, whose trailhead is by the highway, was very busy with cars parked on the roadside. Just in case this was usual we got up early to hit some of the more popular waterfalls. They were empty. Dawson and Helmcken Falls are a short walk from their parking lots but the sun was in the wrong position and the few pictures we took were terrible so we will go again sometime later in the day.

We drove about 20 km north of the campground to first check out the Bailey Chutes and then walk the 4 km West Lake Loop Trail. The trail follows the Clearwater River to two low, wide falls, first Marcus and then Myanth. The trail then loops into the forest passed a small lake but I had read that that section was very buggy so we just returned back along the river after getting to Myanth Falls. 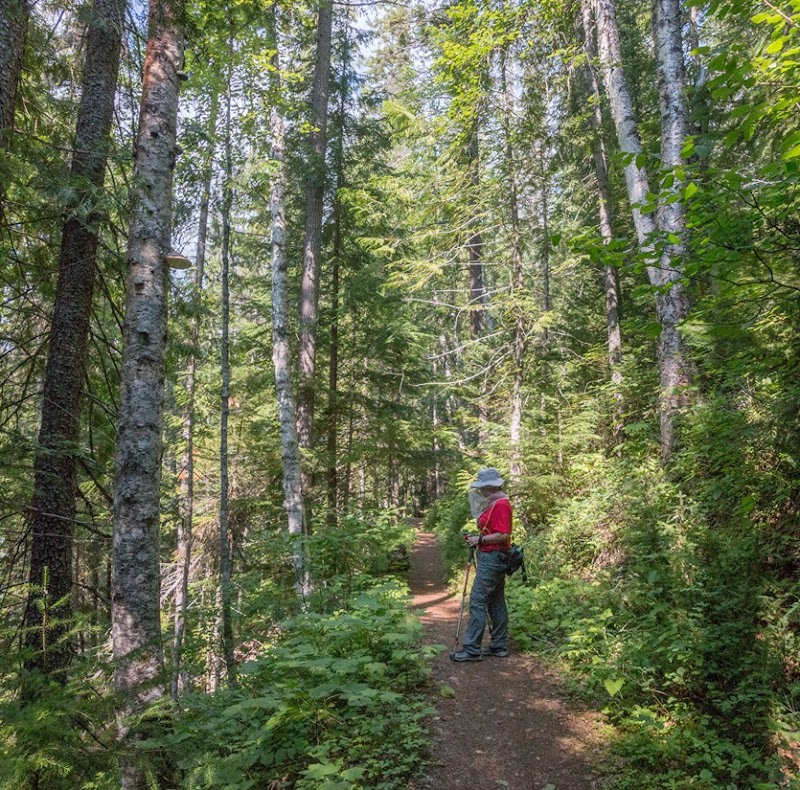 Jennie is wearing her bug net but they were not too bad here although we had both dosed ourselves with 30% DEET.

Today the photospheres come into there own again. Each of the viewpoints was very close to the river so it was really hard to get wide enough shots to include enough to be meaningful. I spent a lot of hours tonight stitching together images to try and get interesting photos.

The Clearwater River is quite wide and has a large volume of water flowing down it very quickly. The Bailey Chutes is a narrow section where the water really gets roaring. It is only a few hundred meters from the parking lot.

This 2 part vertical panorama is just not wide enough. 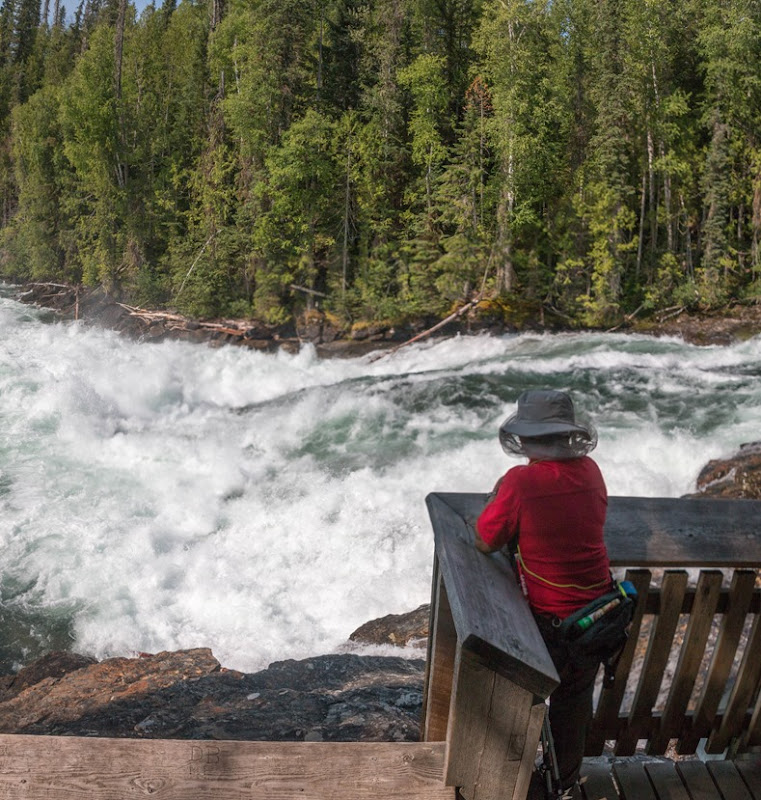 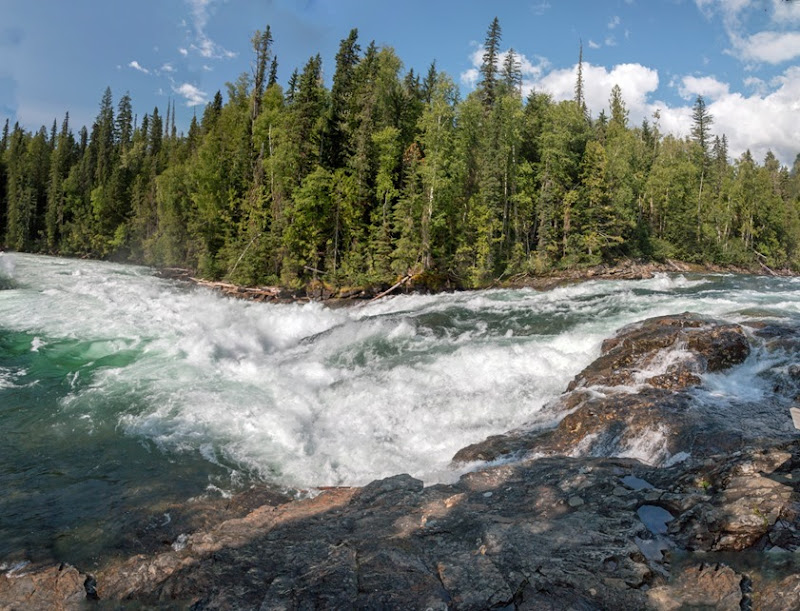 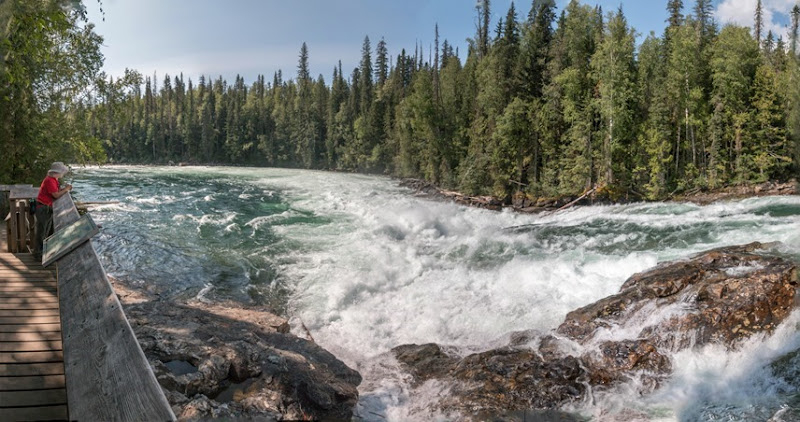 And the photosphere. I also took some movies to make some gifs but they would take forever to load on the internet here. 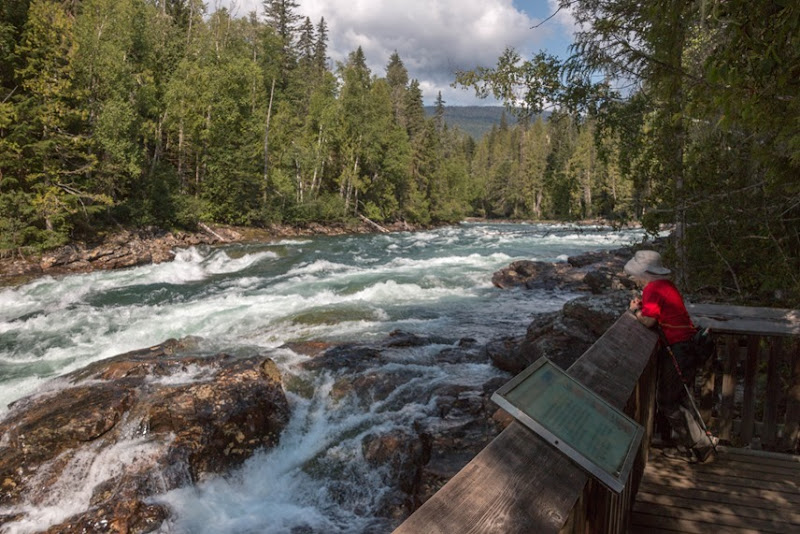 I tried some shots from below the chutes but they didn’t capture the roaring water very well. 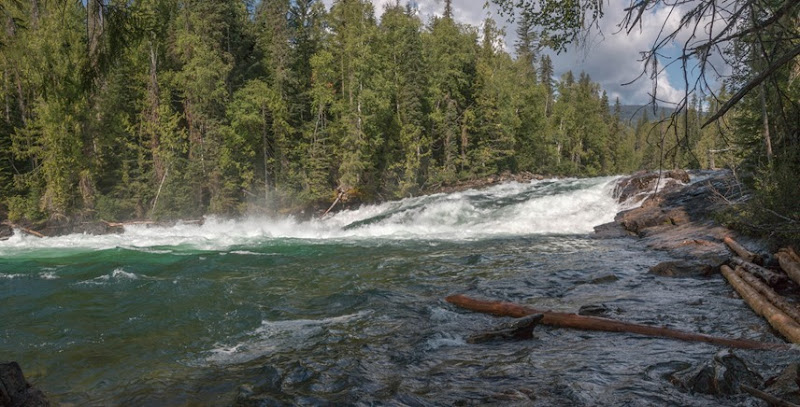 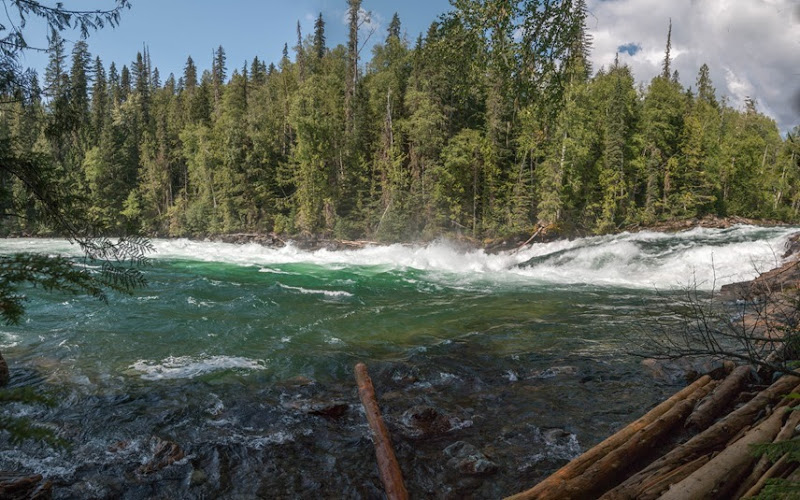 Moving on, there were lots of mushrooms beside the trail. 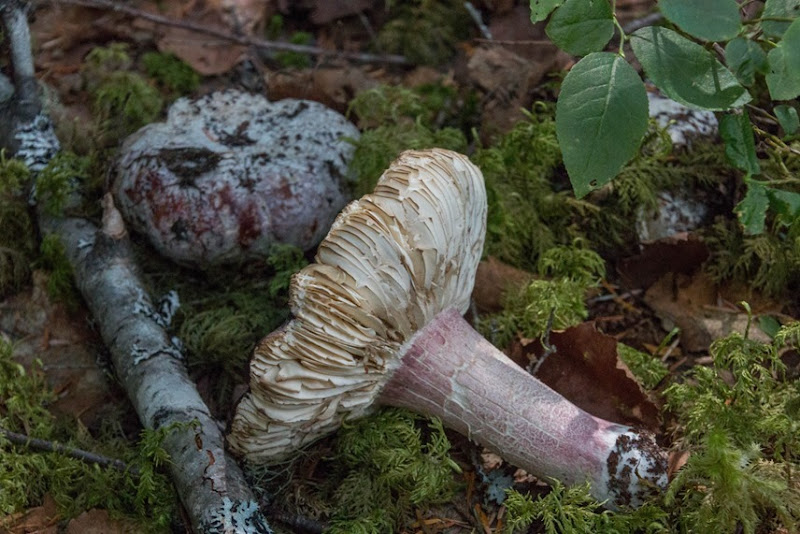 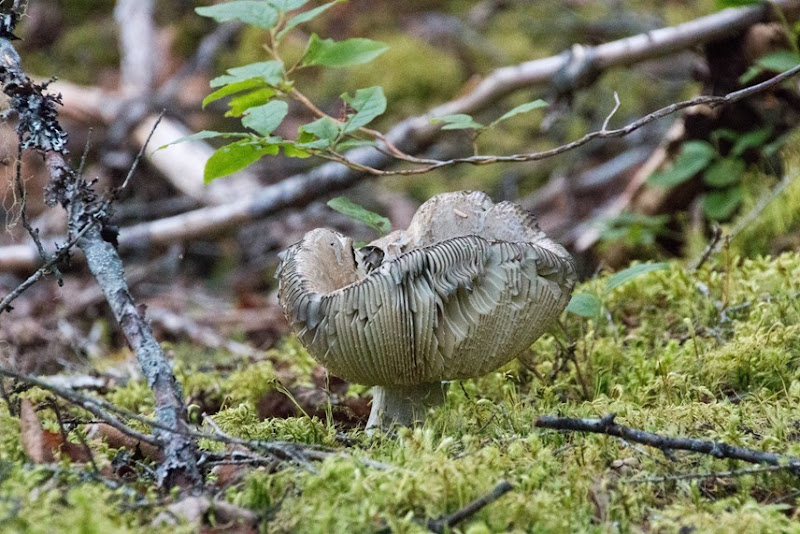 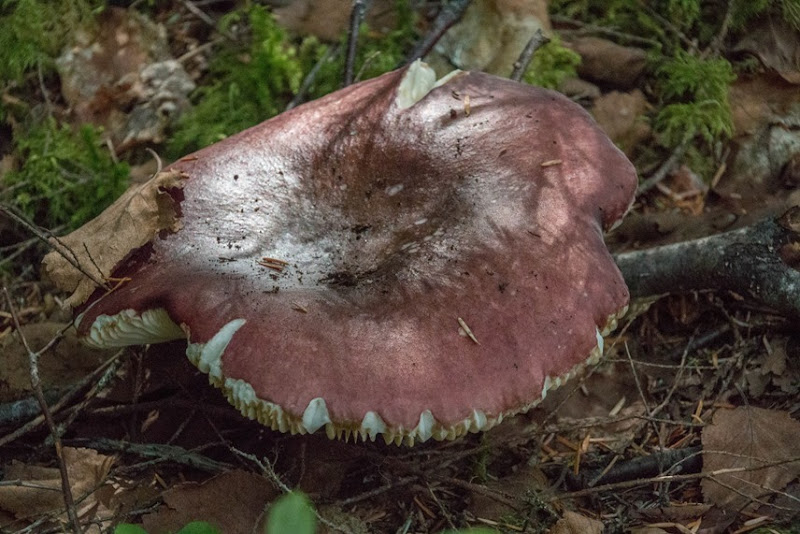 And a nice moth or butterfly (not sure which). 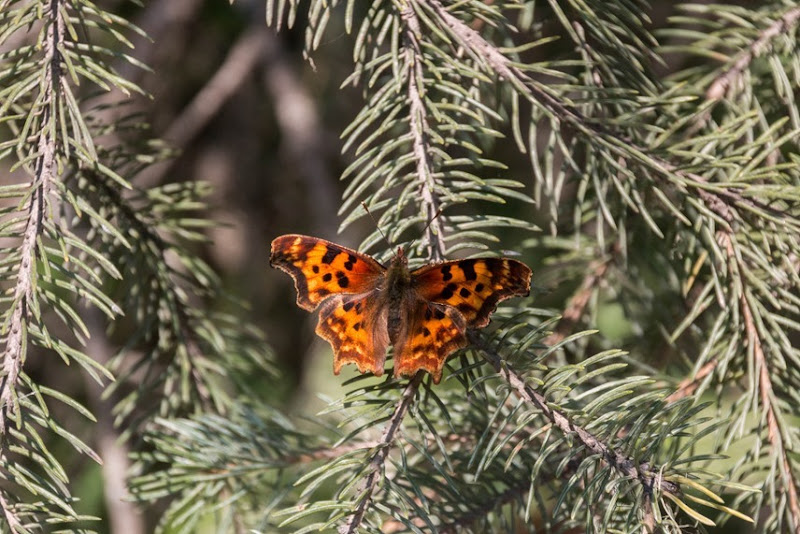 I never got a wide enough shot at Marcus Falls that I was happy with.

These falls were low and very wide but still had a lot of white water action due to the amount of water. 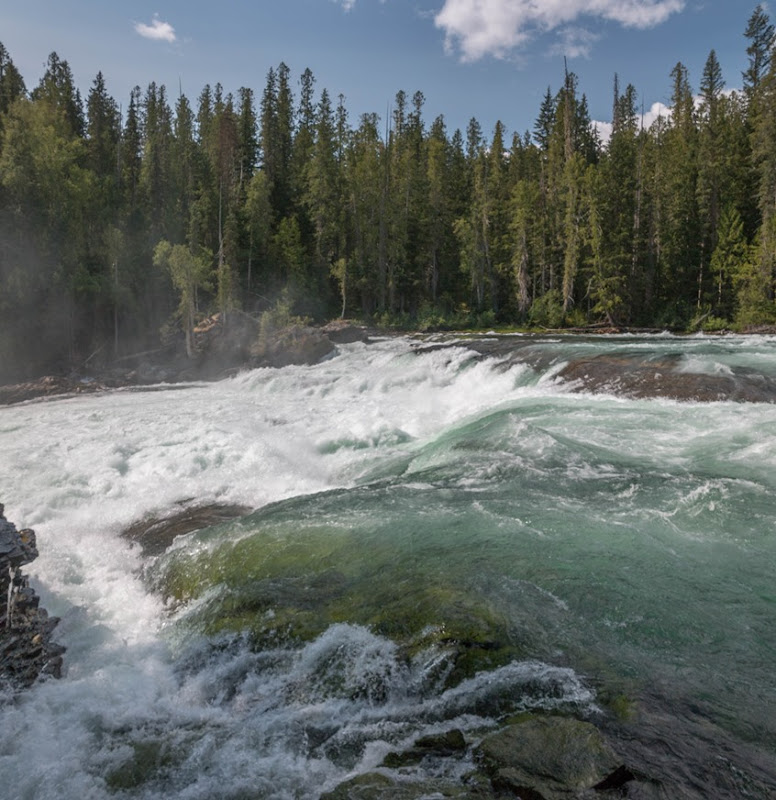 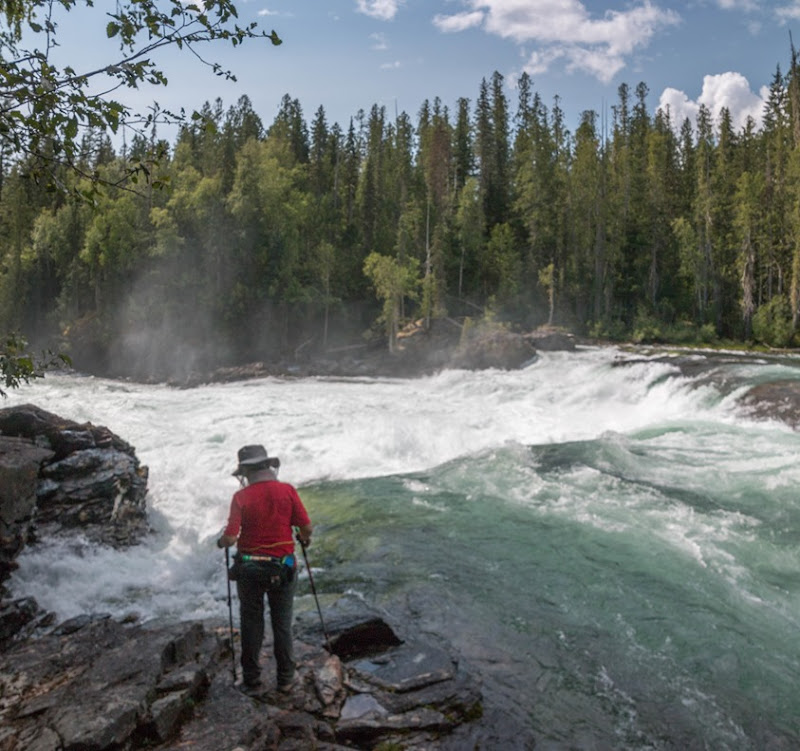 This tiny flower was very persistent in the middle of this wide rock. 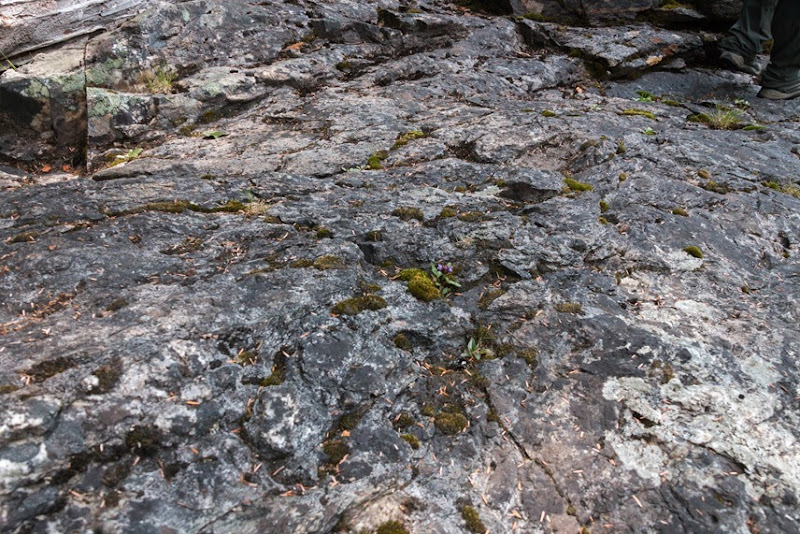 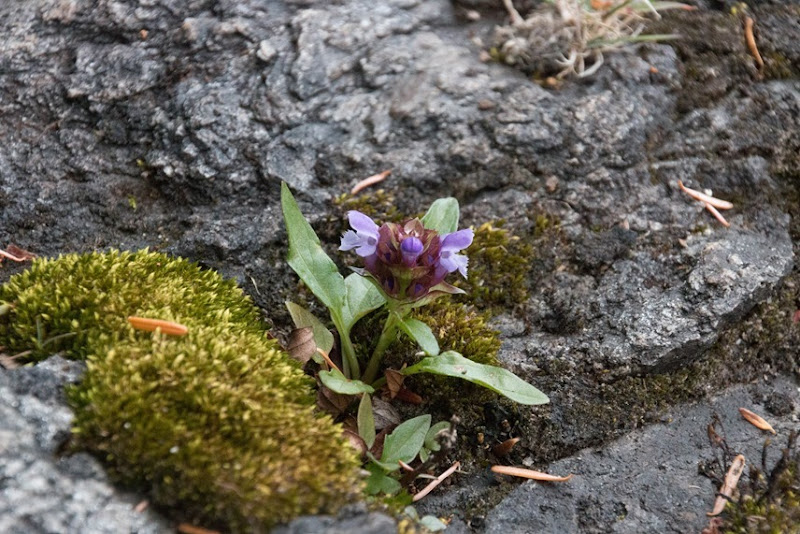 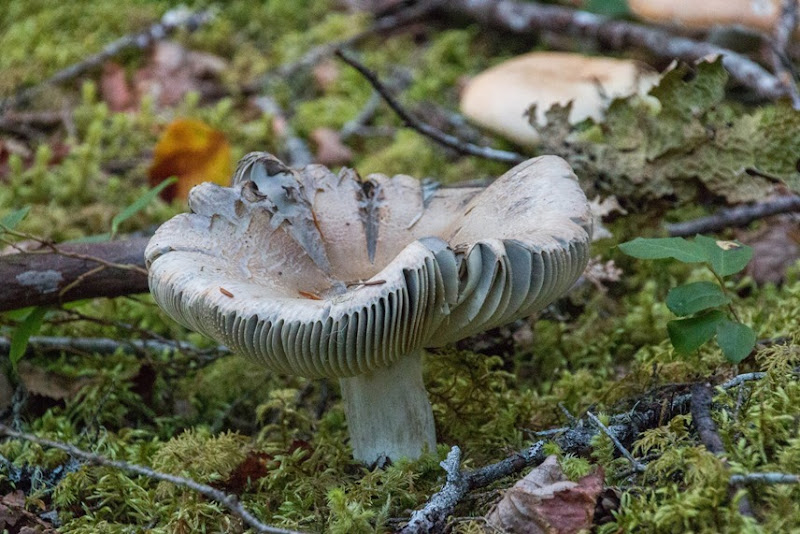 There was a view looking straight downstream, at a bend in the river. The water is so clear you can see the rocks on the bottom a long way down. There was lots of spray from the rapids. 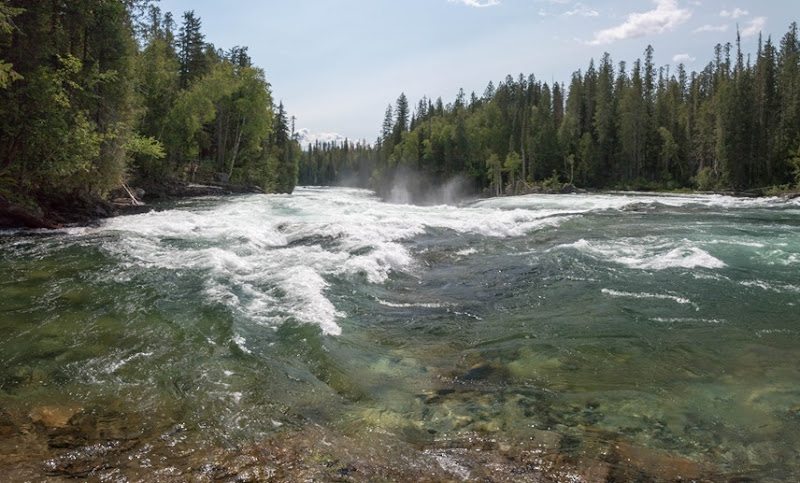 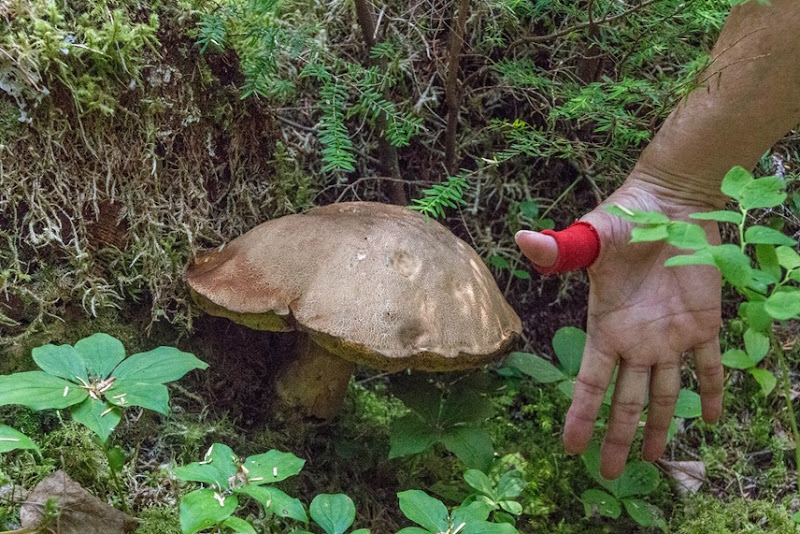 Just before Myanth Falls is a rocky beach created by a bend in the river.

There were so many colourful rocks under the clear water. 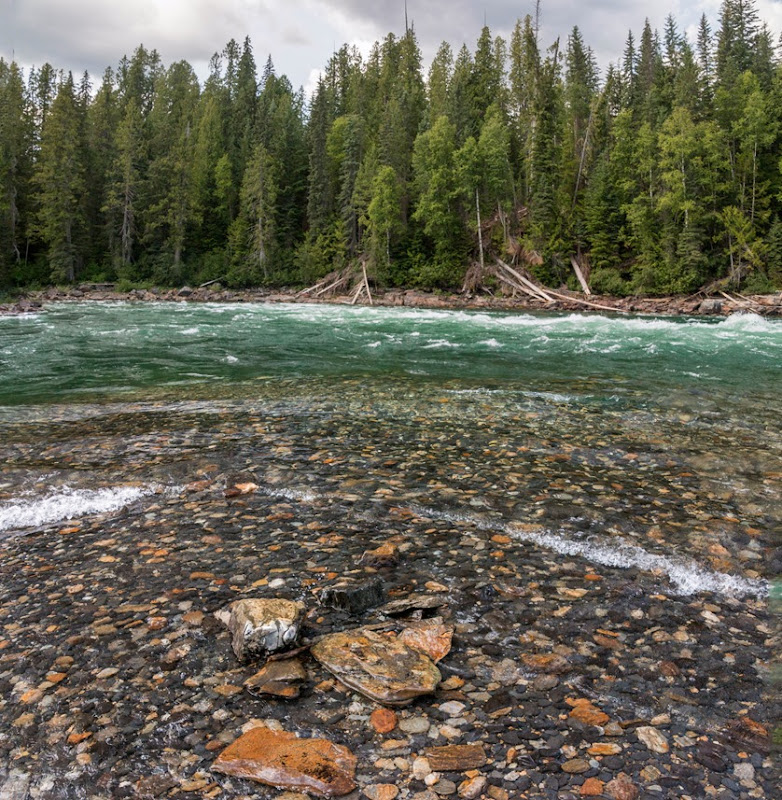 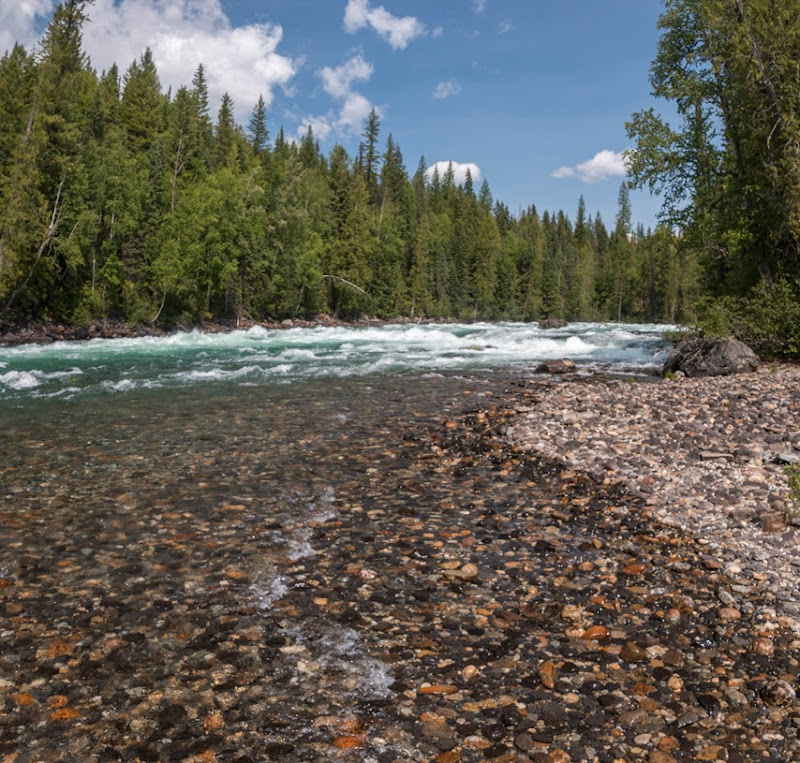 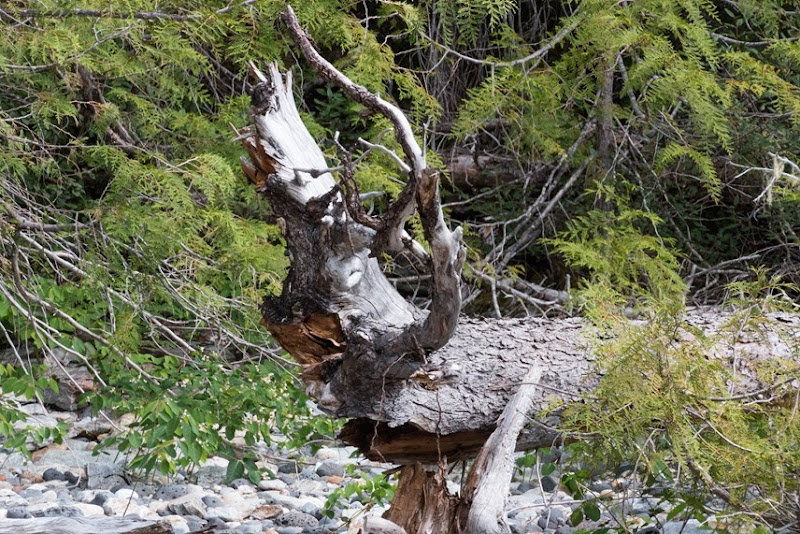 While Jennie was poking around the rocks she got startled by some movement. 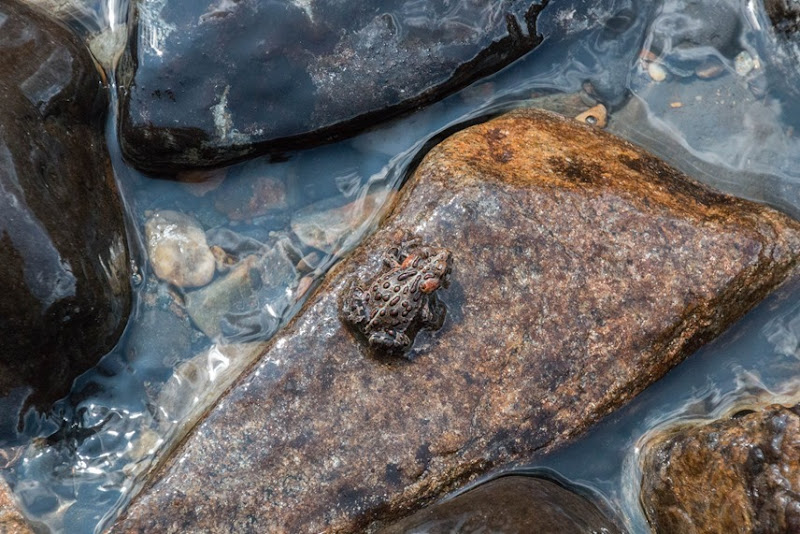 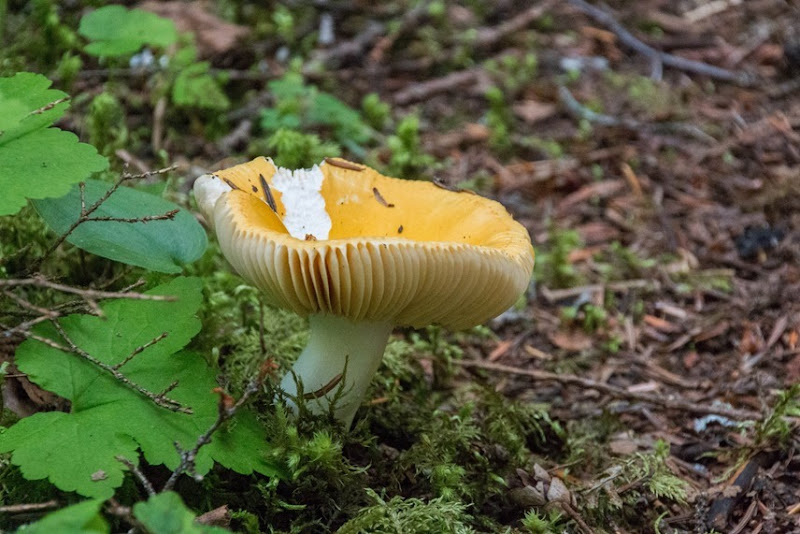 The official viewpoint to Myanth Falls was a bit disappointing. Not bad, just the wrong angle. 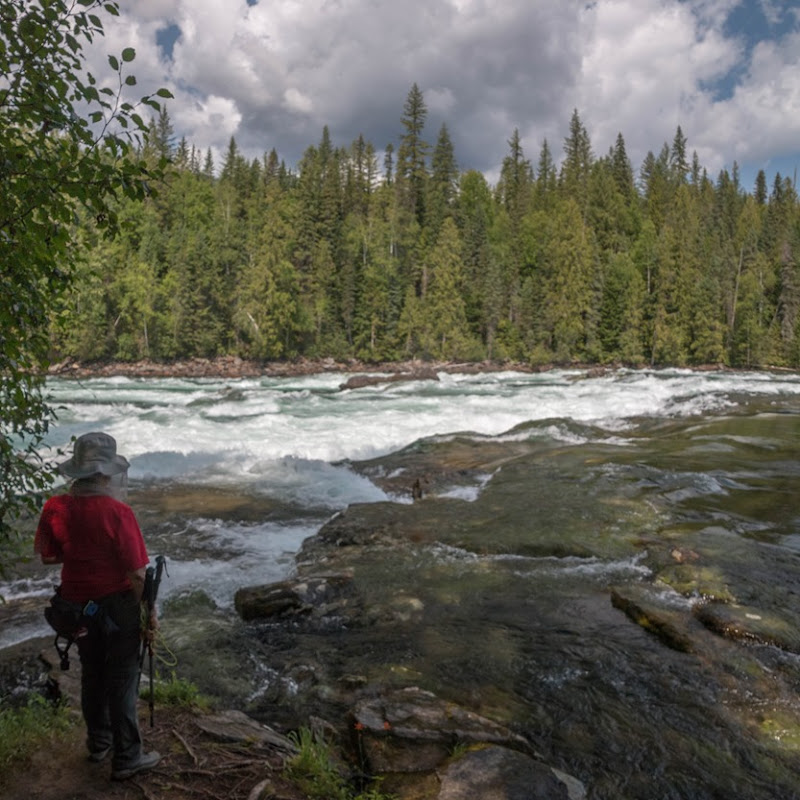 I spotted a rocky point just a little downstream so I followed a faint trail. You can see Jennie’s red shirt back at the viewpoint.

I called her down and we had lunch. 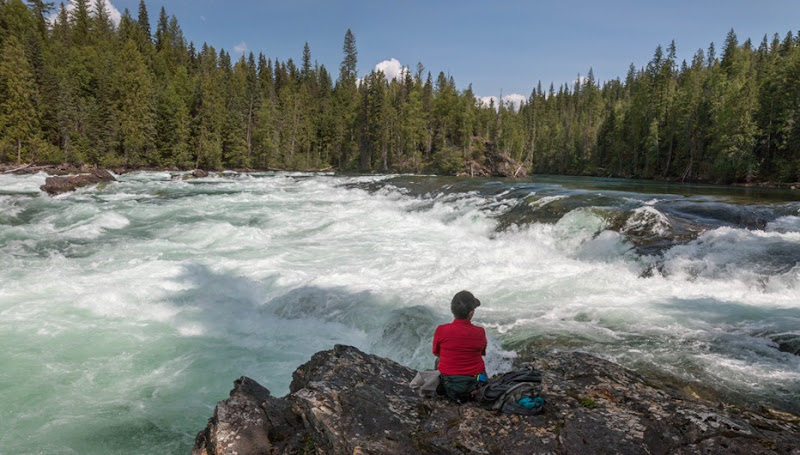 Then we made our way back to the car and home.