Since it is the weekend we decided to explore one of the lesser used portions of the park. We headed to the south east corner to the Two Medicine Region. This is a big park. It took us 1 1/2 hours to make the 76 mile trip from our RV. 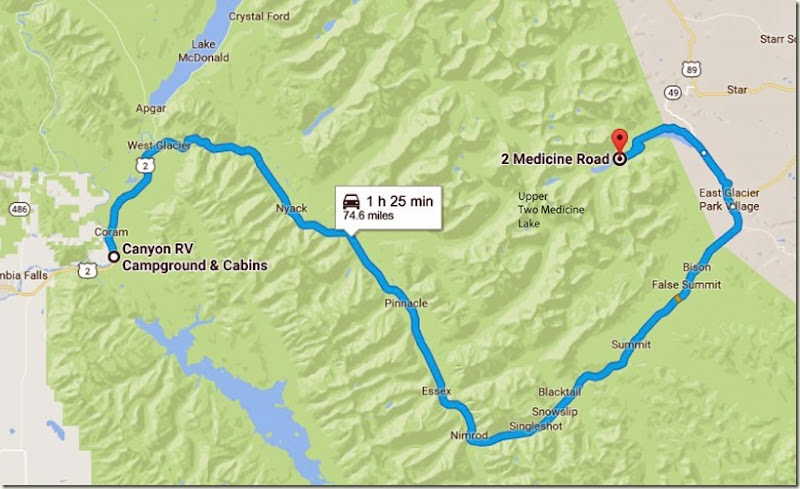 On the way we stopped to get some bear spray. Yesterday on the trail we had seen some bear scat and everyone seemed to be carrying the spray. It is not cheap at $45 a can but since we are also going to Yellowstone, where someone was killed by a bear this year, it seemed like a good idea. 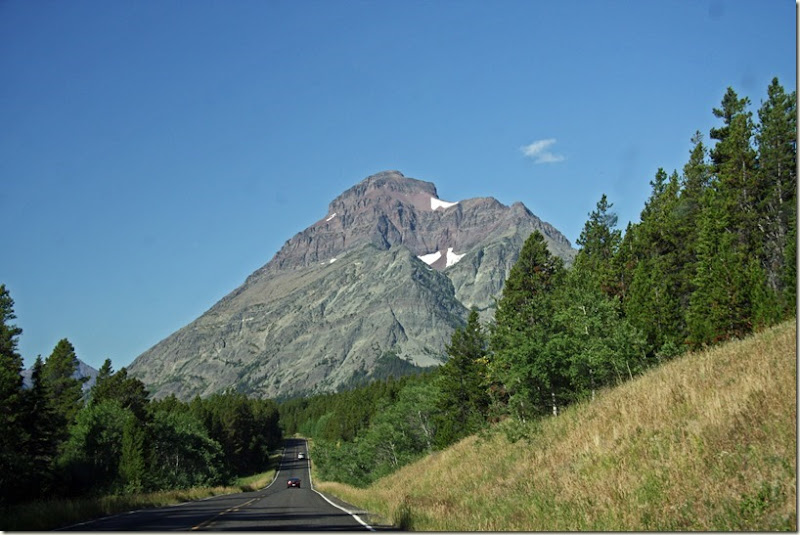 The ranger and the guide book recommended the hike to Upper Two Medicine Lake. You can either hike the entire 12 miles round trip or you can pay $11 and take a 20 minute boat trip to the end of Two Medicine Lake and then the hike is only 4.5 miles to the upper lake. Guess… 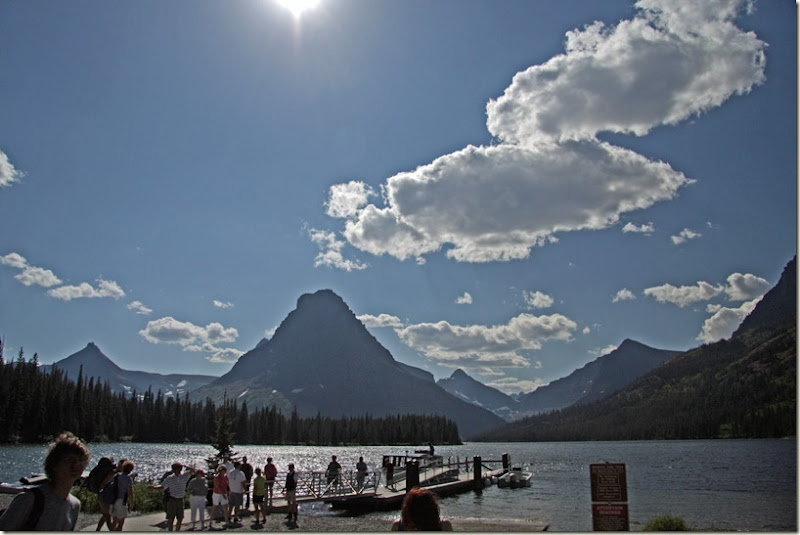 They make 5 round trips a day with 50 passengers each trip. We got there at 10:15 and managed to get tickets to the 10:30 trip. Some people just go up and back. Hikers can get off and catch a later boat. On the last two trips back for the day, if there is not enough room for everyone, they immediately come back until everyone is done.

During the trip someone asked the captain how the weather had been. He said it had only been nice in the last two weeks. “July was much like June which was much like, well, winter”.

Landing at the other end. 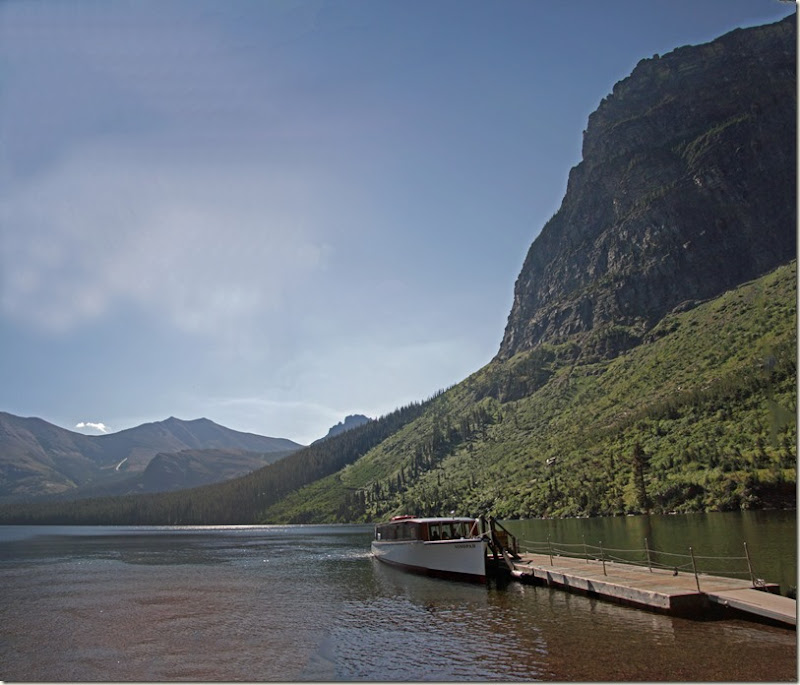 The only problem with the boat trip method is that you end up with a herd of people all starting their hikes at exactly the same time. It took a while for us to all spread out. Not everyone was doing the same hike though.

We walked in the forest for a while and through a break in the trees saw Pumpelly Pillar. 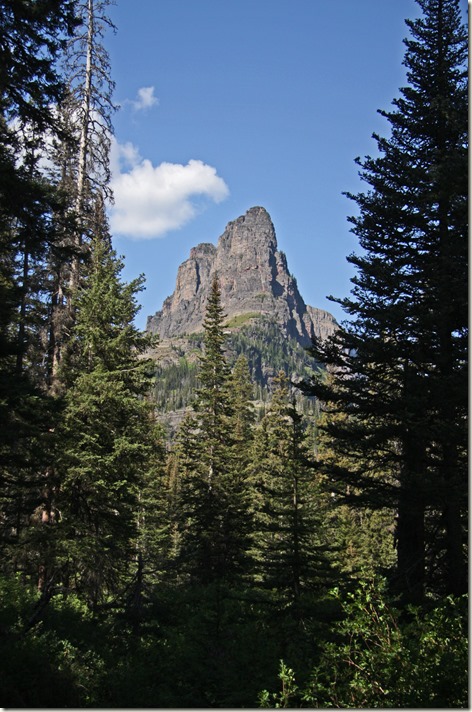 A short side trail led to Twin Falls. What is a day without some waterfalls! 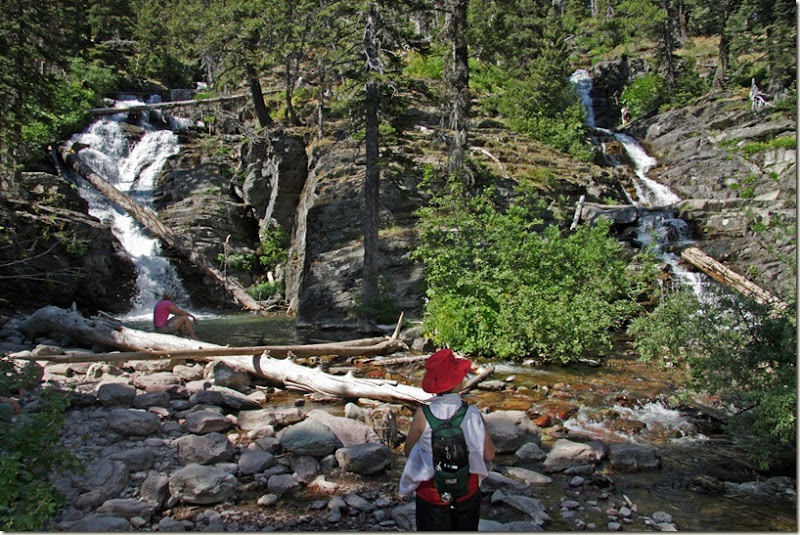 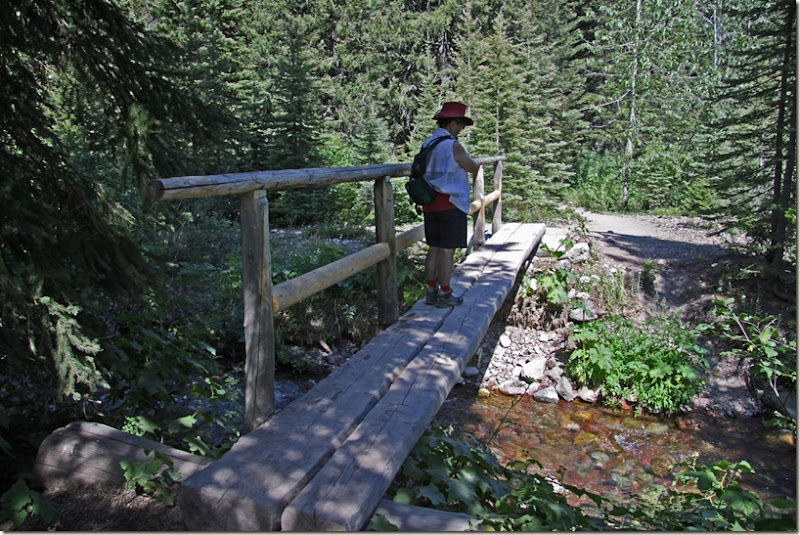 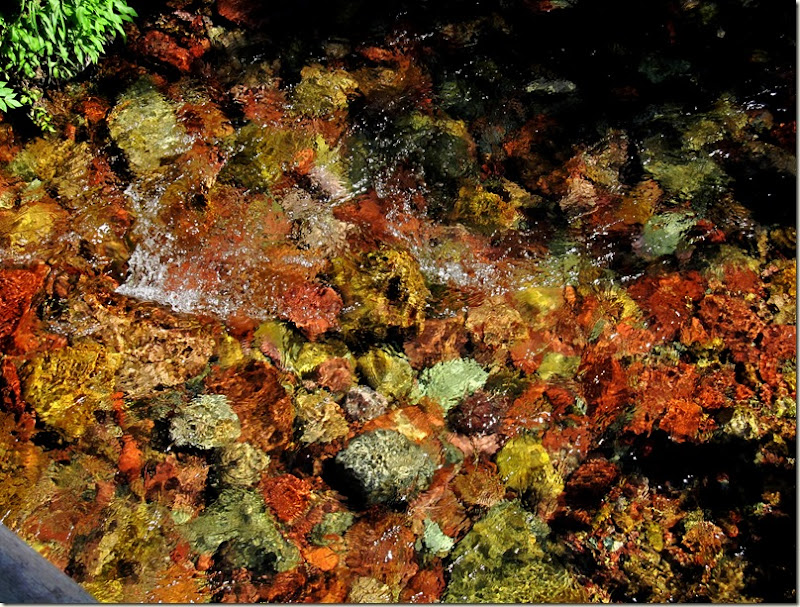 You eventually break out out of the trees into the river valley with a huge wall of rock on one side and a string of mountain peaks on the other. 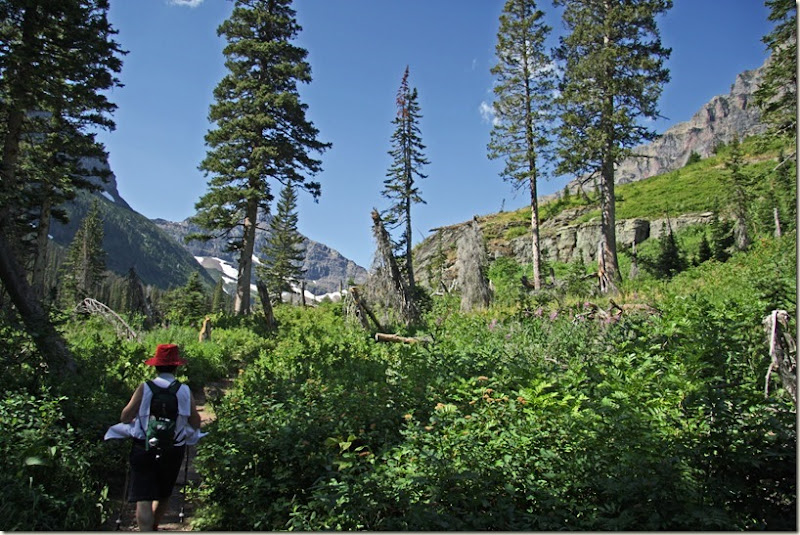 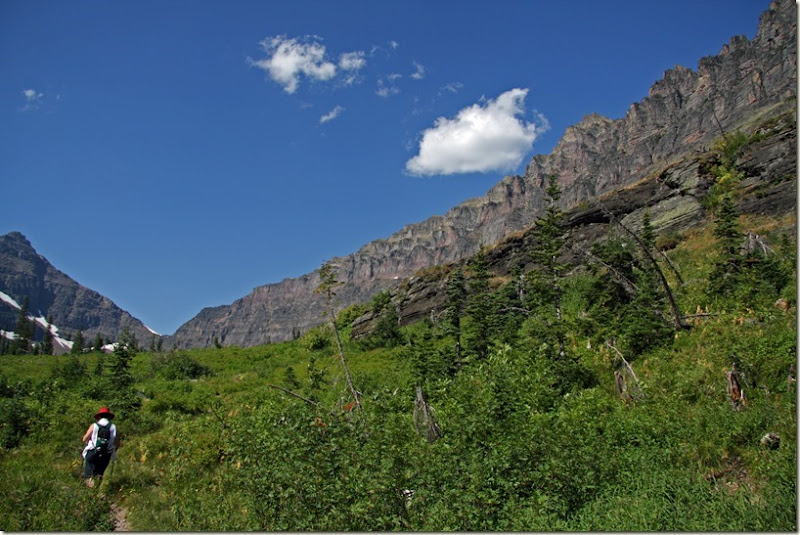 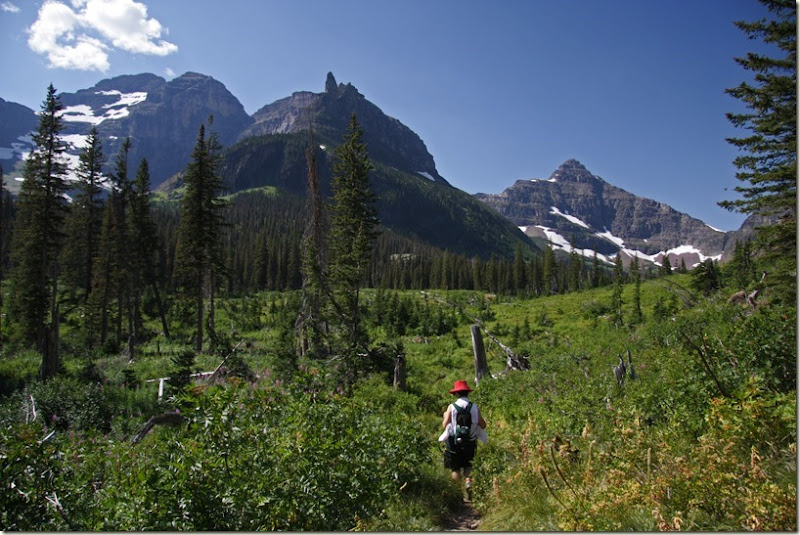 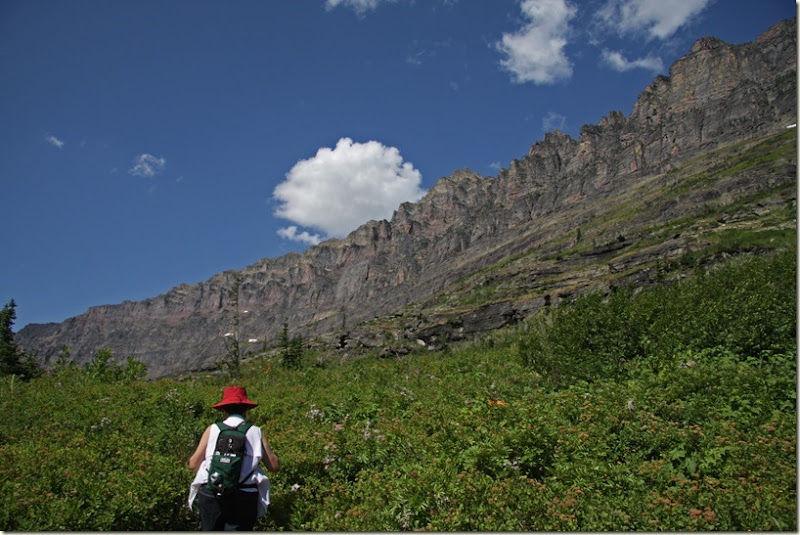 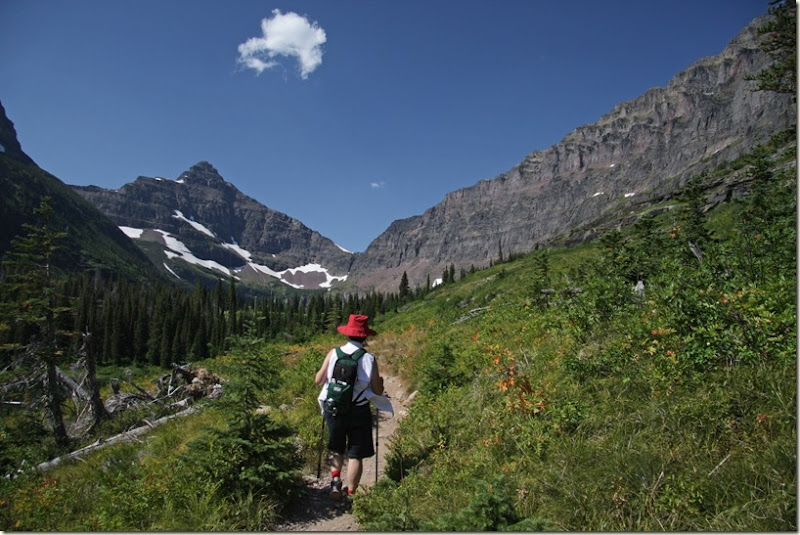 Once we got to Upper Two Medicine Lake we sat to have lunch and enjoy the view. 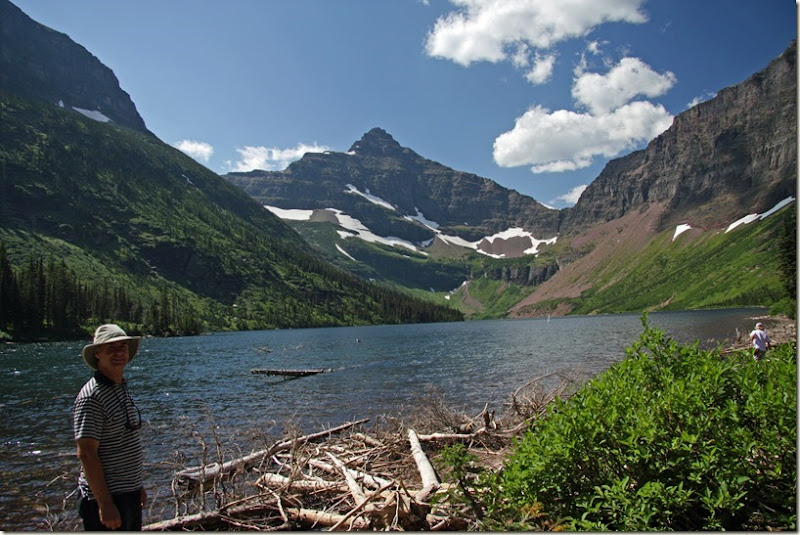 I scanned the mountain wall with the binoculars for any signs of wildlife. I actually spotted a mountain goat, the only thing we have seen other than hundreds of marmots.

It is the little white dot in almost the exact center below. The view in the binos was a bit better than this telephoto picture. 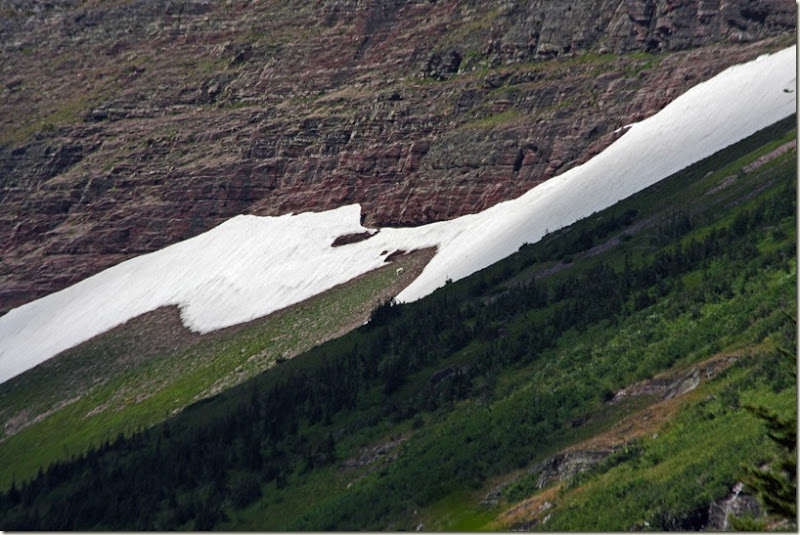 This gives you an idea how far away he was. Match the snow pattern. 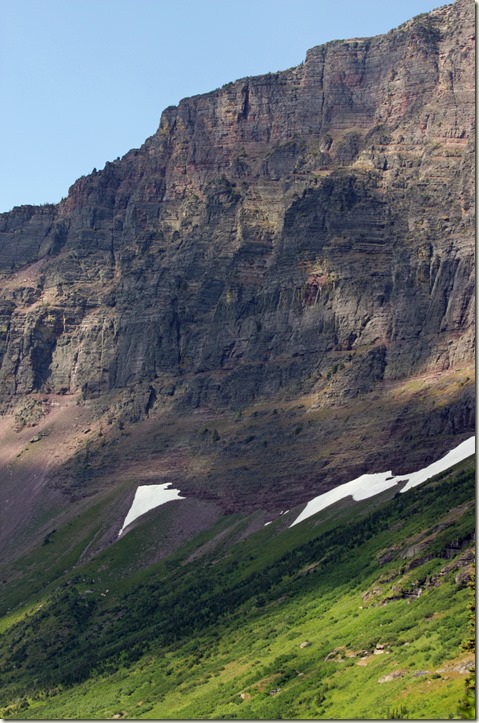 We slowly headed back to catch the 3:20 boat. 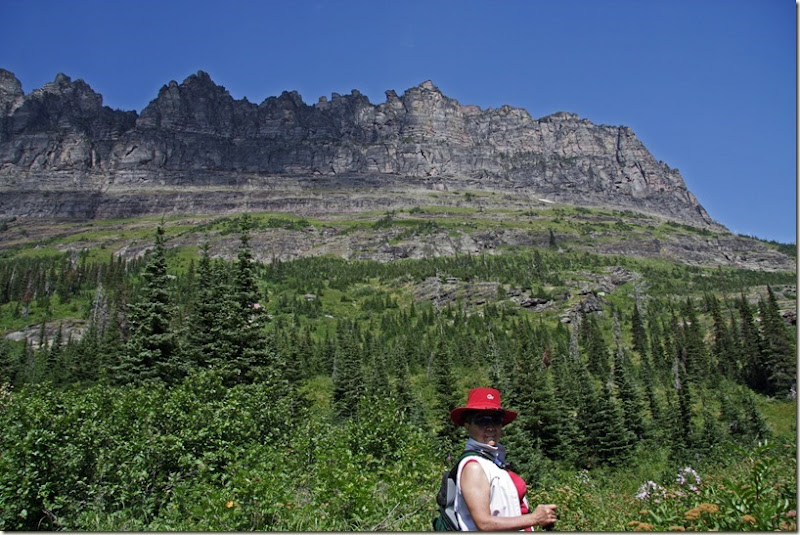 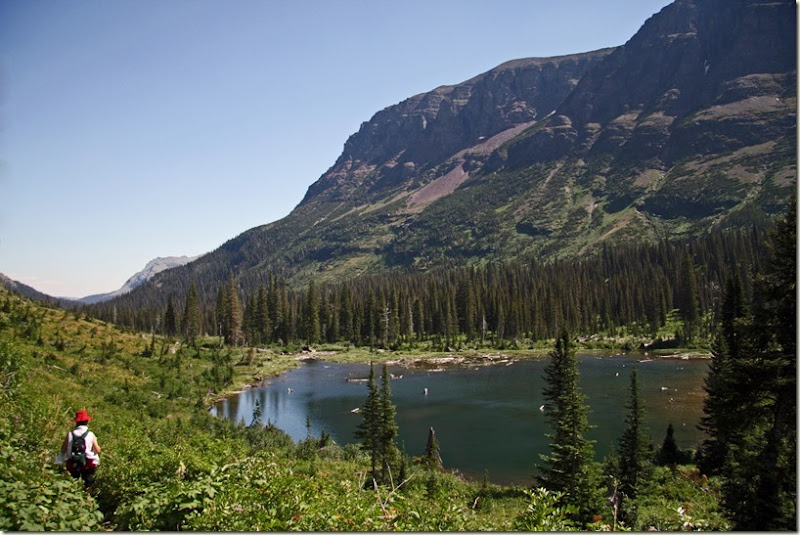 While waiting at the dock I cooled off a bit in the lake. It was not too bad but cold enough that I didn’t want to go much farther. 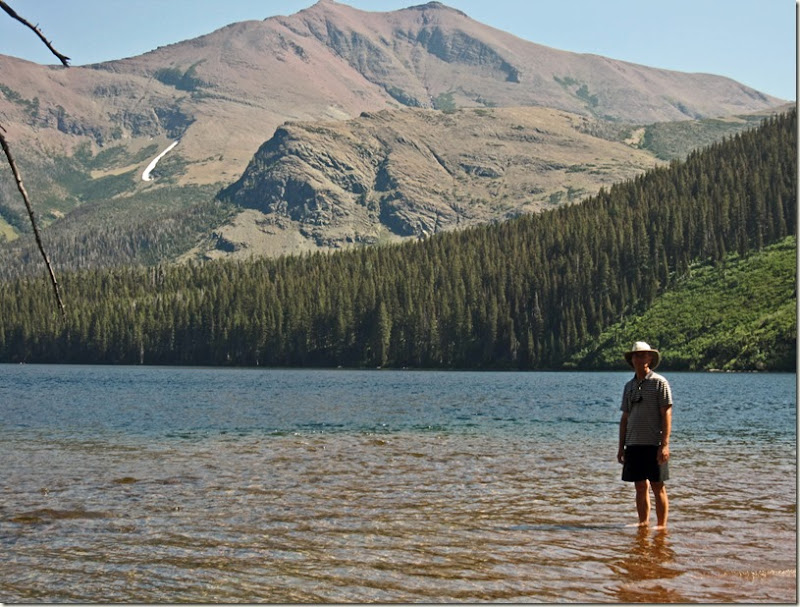 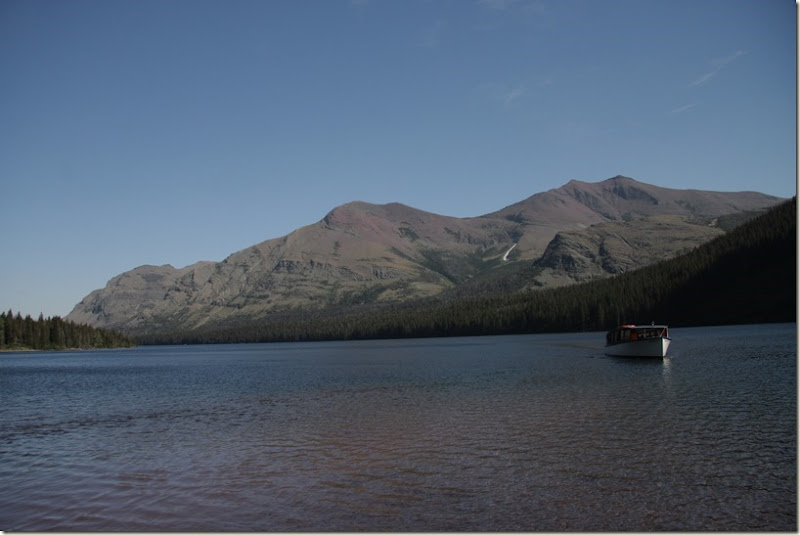 In the picture below the 3 people in front had actually hired this guy to give them a ride back in the tiny skiff powered by two electric motors. Nobody could figure out why. It’s a good thing it wasn’t wavy. 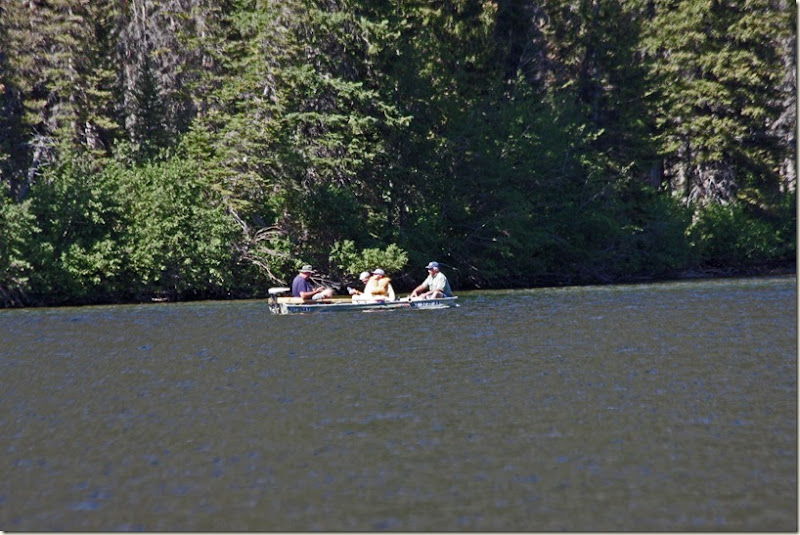 This is what they looked like from our boat. 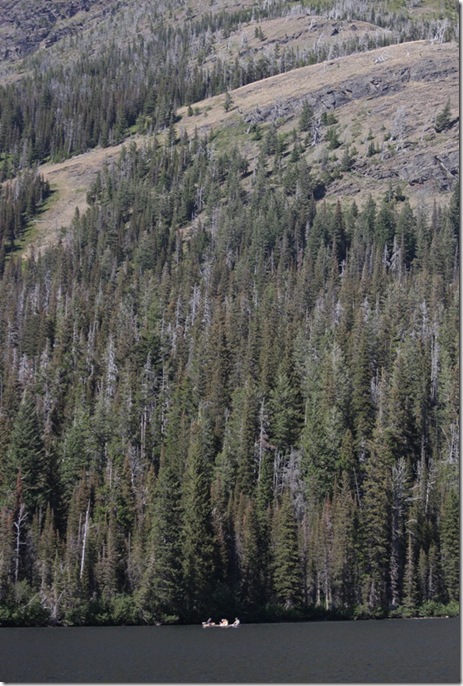 You can see them way down at the bottom in the middle, below. 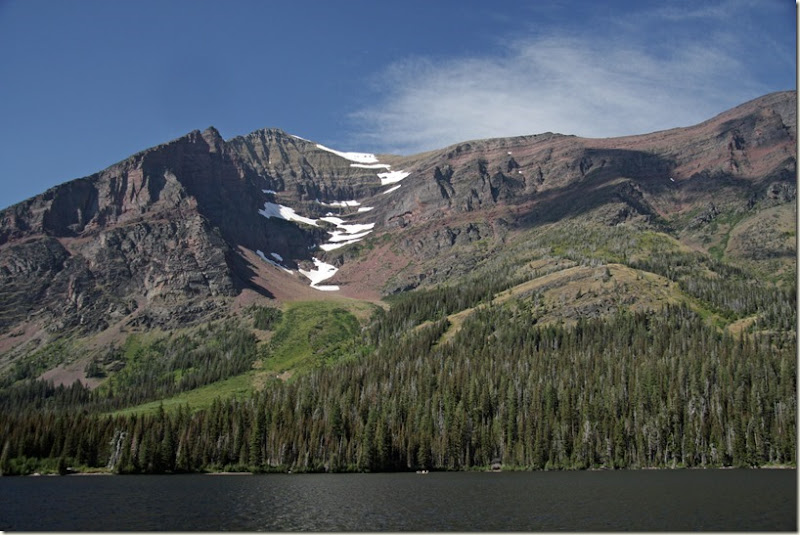 On the drive back we stopped at the amazing Glacier Park Lodge. 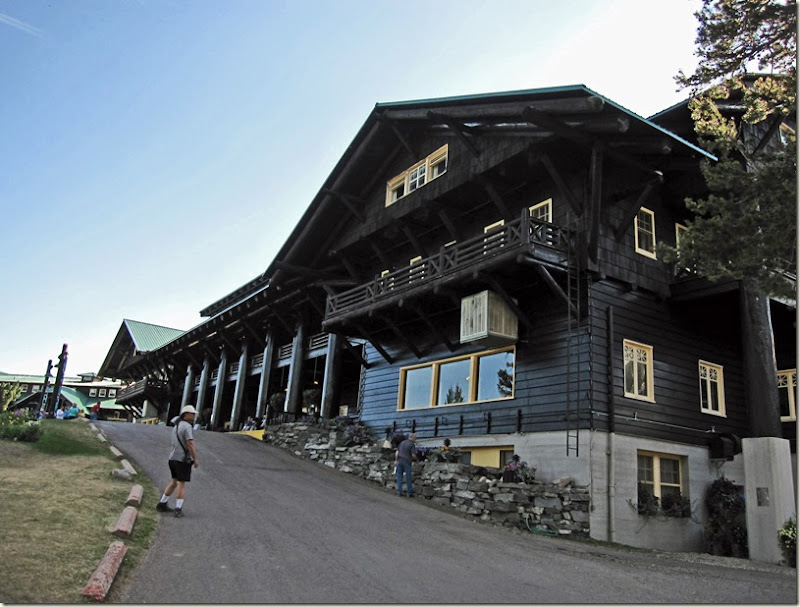 The pillars and beams in the lobby are real tree trunks, bark and all. 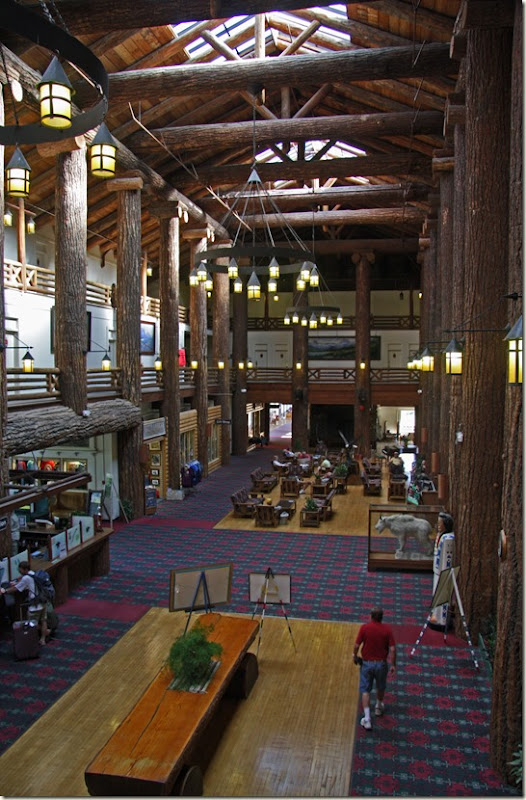 Then the long drove home.