Our campsite is in the southwest corner of the park. We went to the Ohanapecosh area which is in the southeast corner and about an hour drive away. We drove in a loop, out on a forest service road along a creek and back through the main park road up to Paradise and back down to the RV.

Once we got there as usual we hit the visitors center and then did a short hike to, guess what, another waterfall.

On the way we passed what is called a travertine mound. It is a little hot spring that is bubbling up and bit by bit it builds this limestone hill. 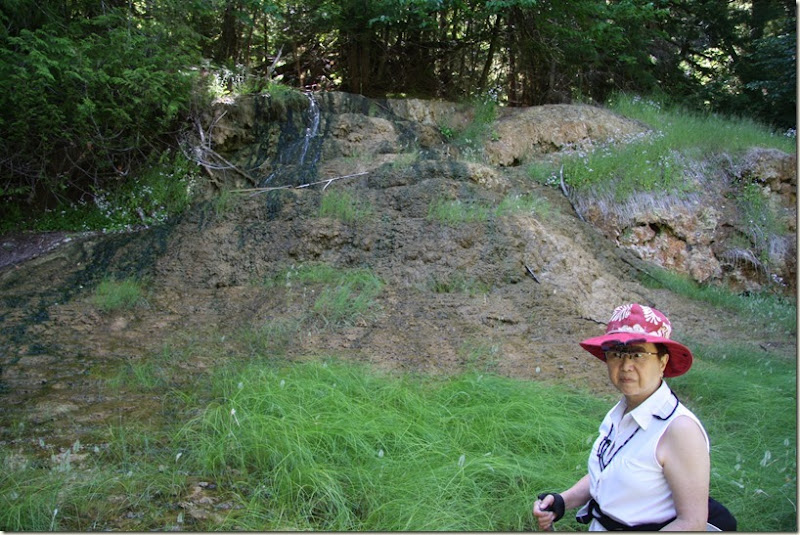 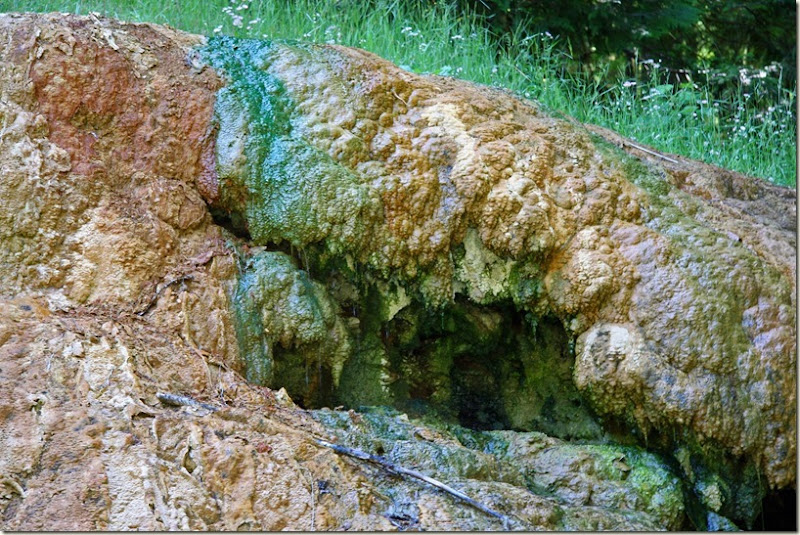 The walk to the falls was through this pleasant moss covered forest. Not every hike can have amazing scenery. 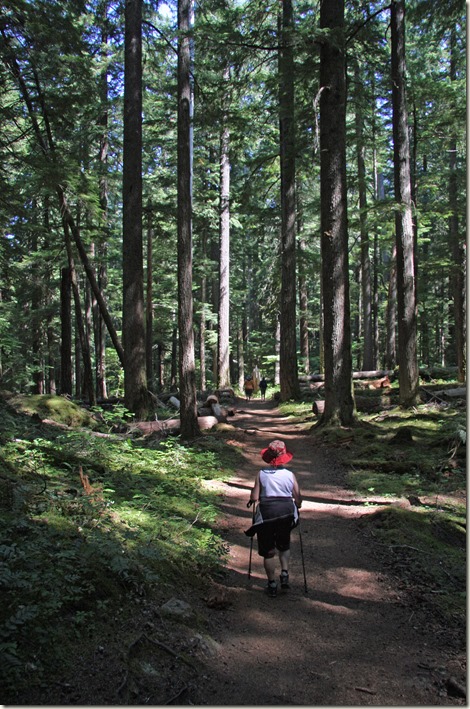 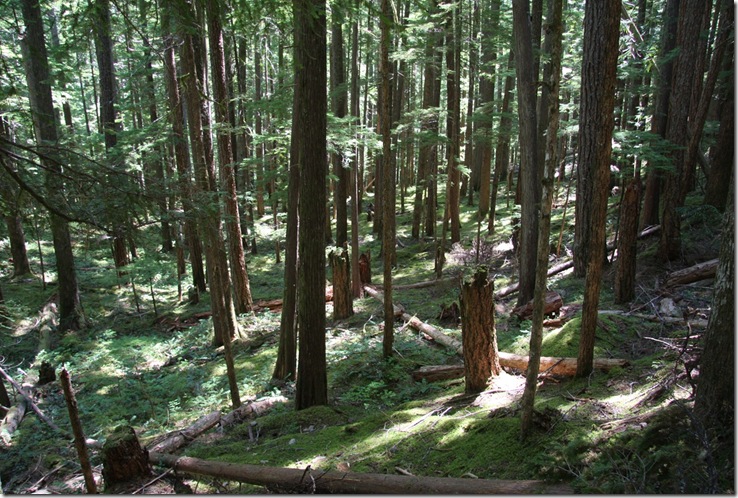 The falls themselves were interesting to watch and we had lunch on the rocks in the center of the picture below. 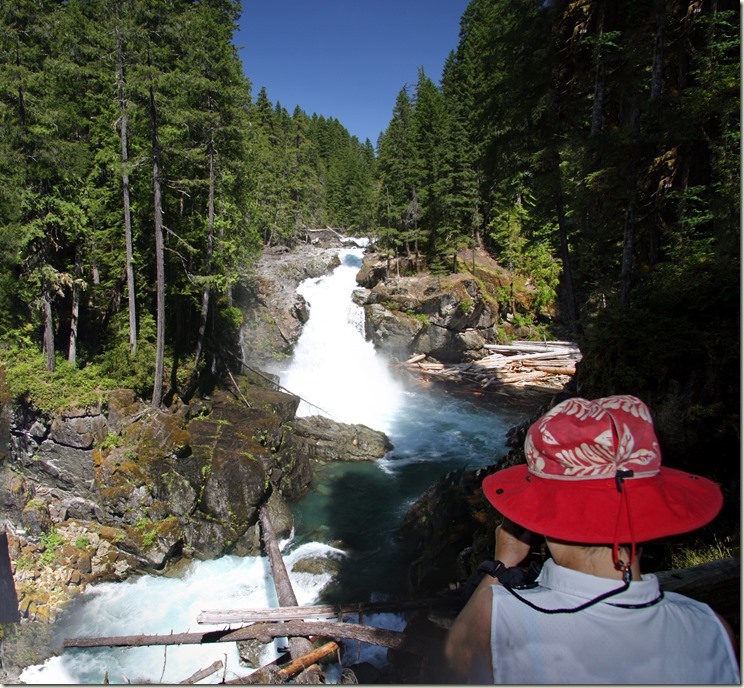 What was unusual was the deep green colour of the river. The ranger I asked didn’t know why but I suspect it picks up some minerals as it flows down the mountain. The water is also very clear. 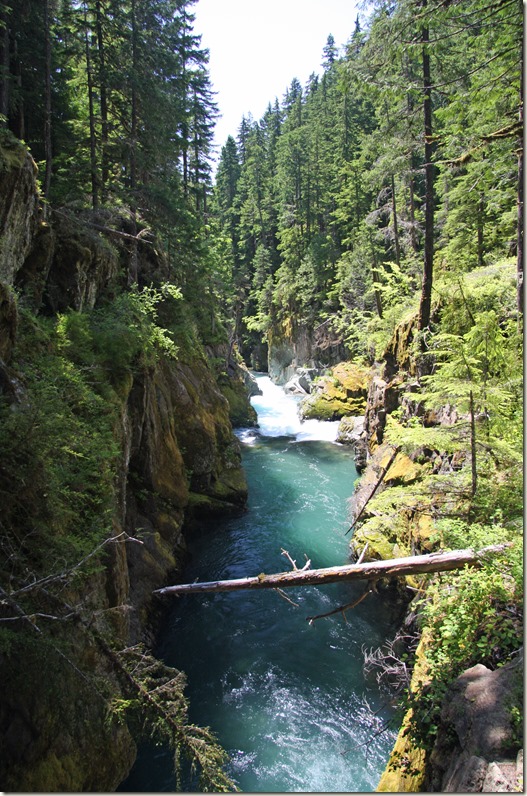 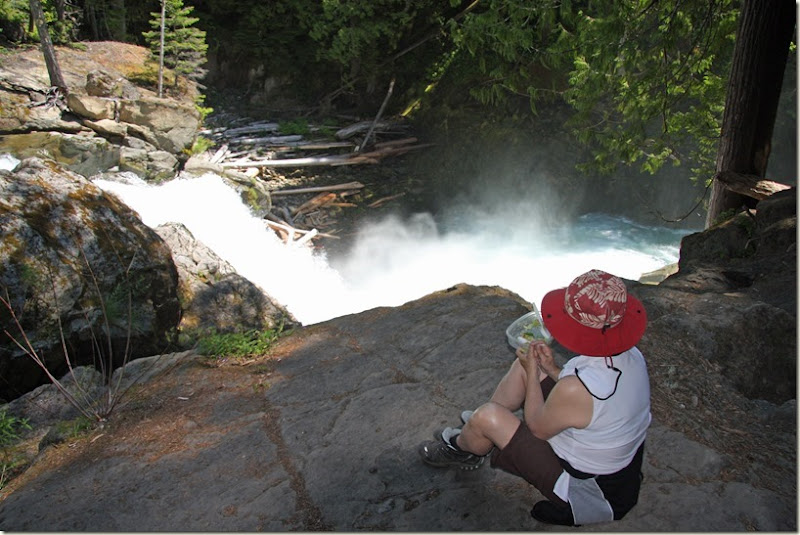 Next up was a hike called “Grove of the Patriarchs". More big trees, been there, done that. What was interesting was the bridge you have to use to get to the grove across the same green river.

It was a wire suspension bridge that they recommended only one person at a time use. It was not because it couldn’t take the weight but because it moved so much. As you walked across it you could see the wave from your footsteps move across the bridge ahead of you. If two people were on it they could knock each other over. 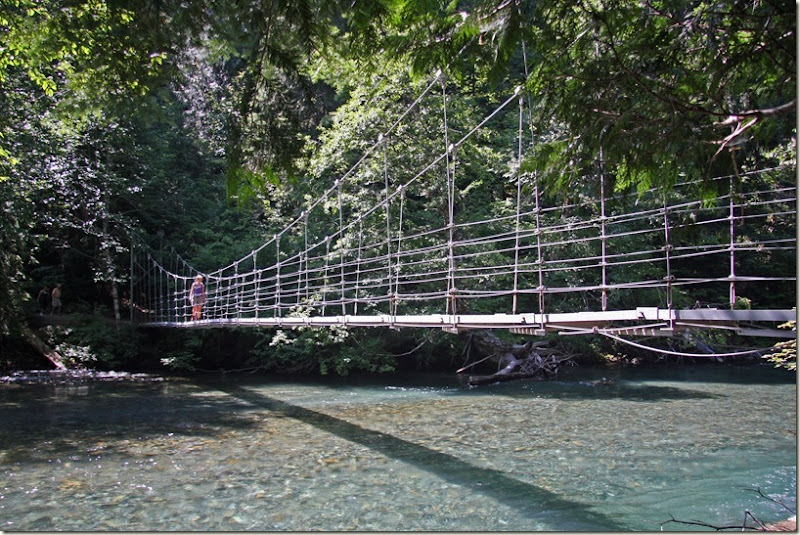 Needless to say this was fun for me but not so much for Jennie. We went across together, very slowly. Then I went back and bounced around a bit.

I had to put a least one big tree picture in. 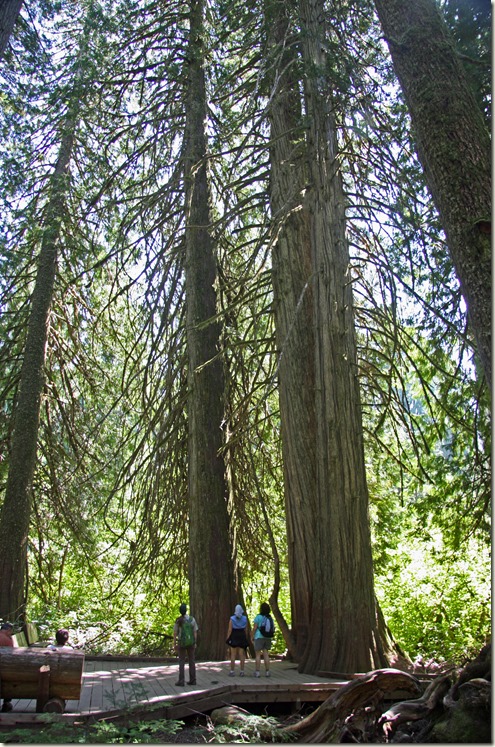 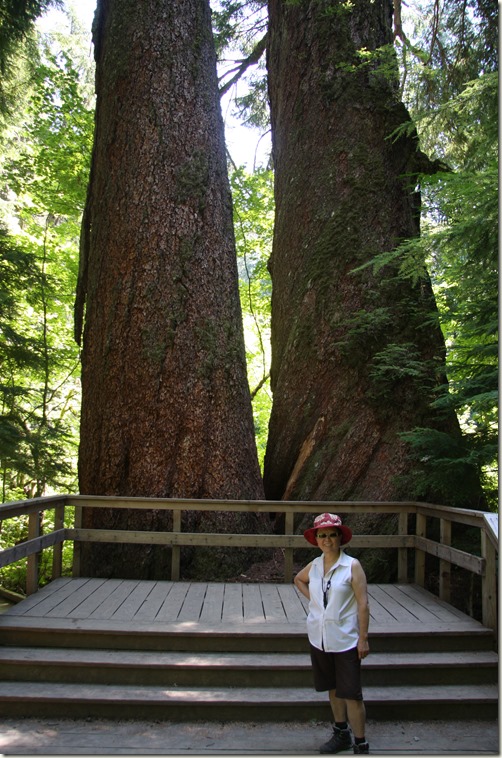 On the park road going up the east side of the mountain we stopped at Box Canyon. It started out as a crack in the rock but a river has eroded it down. From the bridge over the road it is 180 feet down to the water but the canyon is only 13 feet wide.

We walked along a short trail beside the canyon. 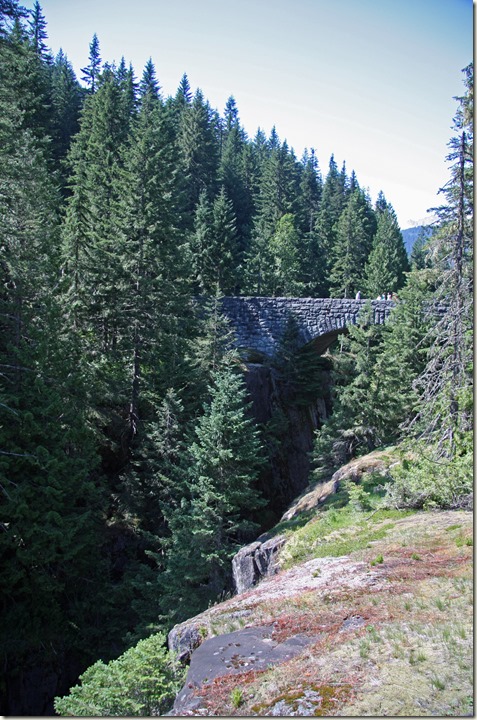 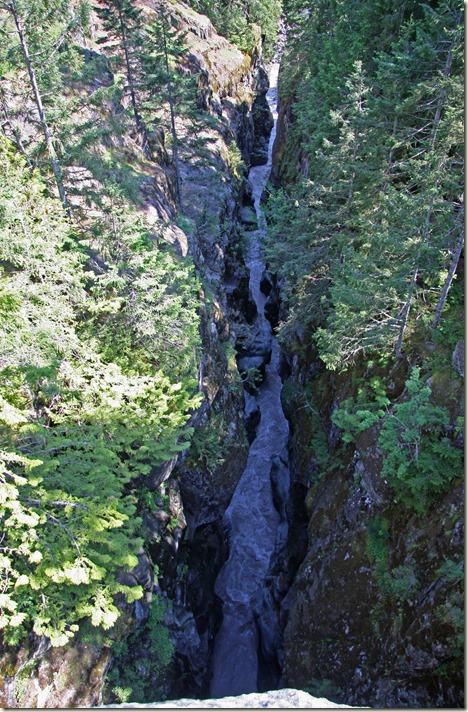 Lots of interesting patterns in the rock as they eroded away. 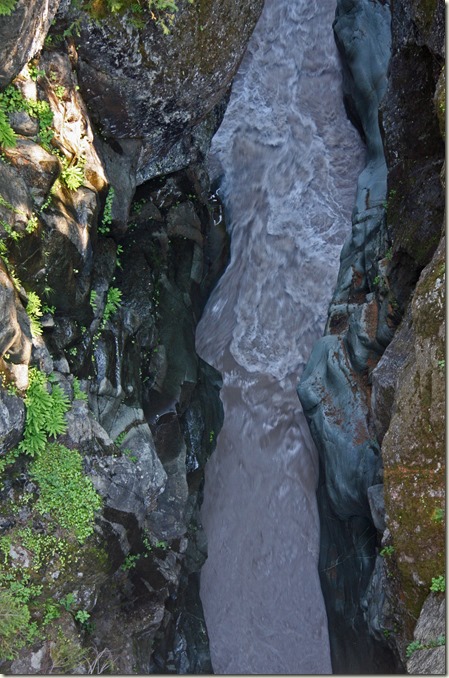 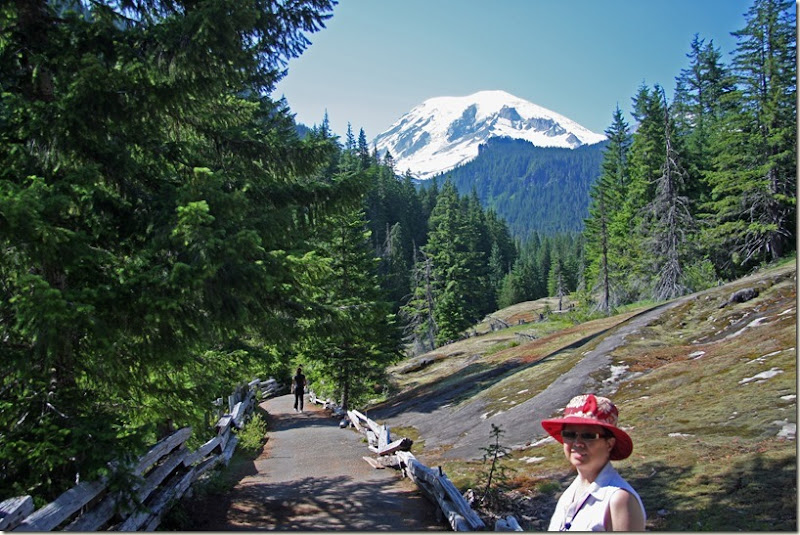 The drive up the west side from our campsite is mostly in forest with a few viewpoints. Today’s drive up the east side is much more picturesque. You drive up the side of a very large steep canyon, go around the end and keep driving up the other side with great views back down where you came from. I didn’t get many pictures worth showing as there weren’t a lot of turnouts to stop. 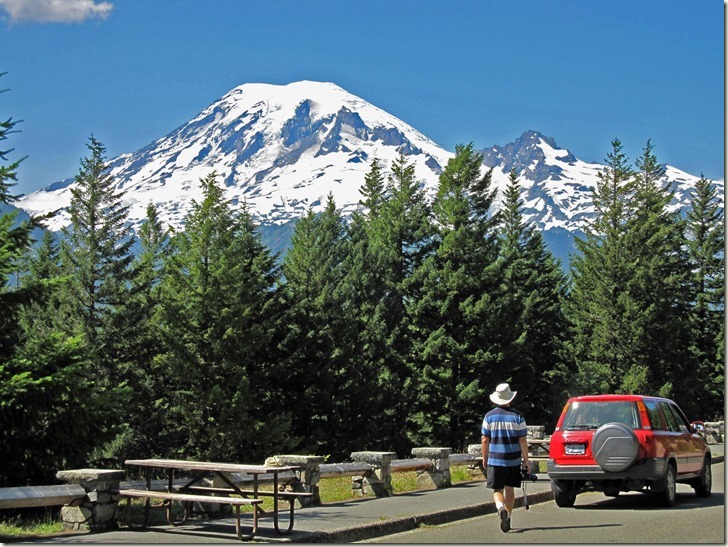 A waterfall far down in the valley, with the road zig-zaging up the mountain above it. 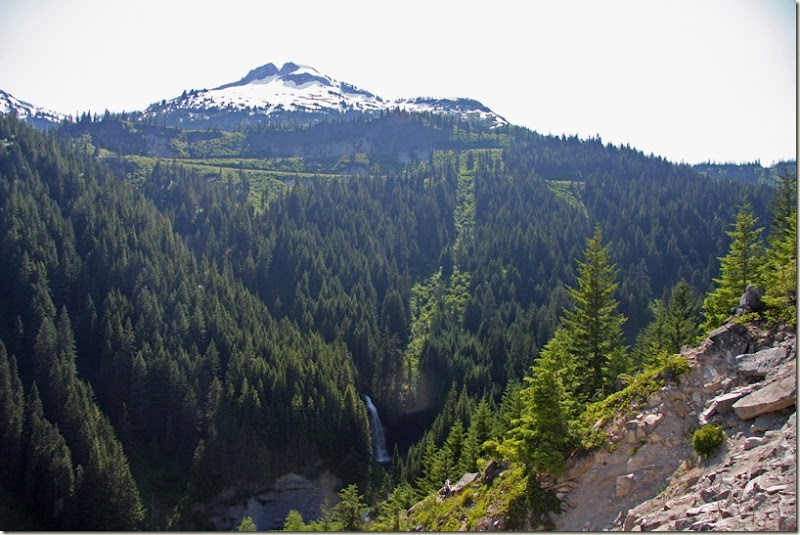 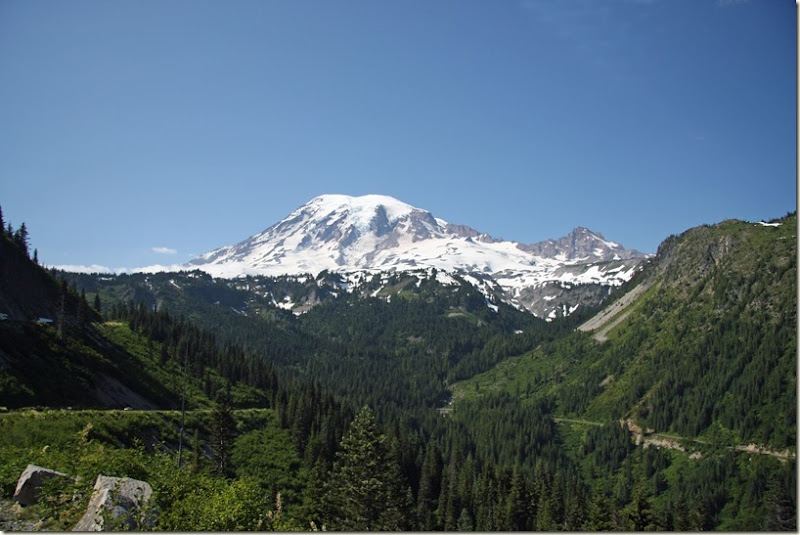 We did get some nice views of the glaciers. 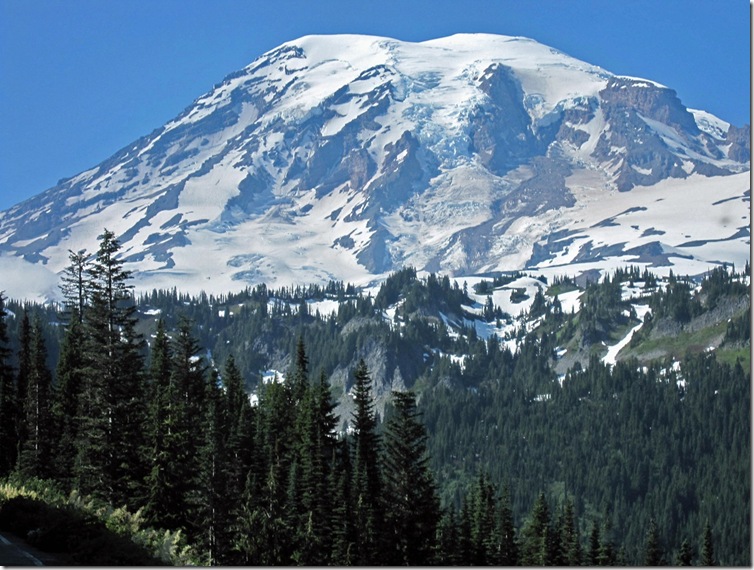 One things we did notice is that if you drive down a forested road and see the mountain framed by the trees in front of you it looks huge but when you break out of the trees and see the entire mountain it somehow seems to shrink. I think this is the same effect that makes the moon look much bigger when seen low in the sky. When you don’t have known things to compare to, objects look smaller.

For dinner we went to a restaurant run by a couple that moved here from Tibet. It seems they bought a place that already had made a name for itself because it is called Wildberry Cafe and most of the menu is pretty standard North American fare but they do have a small menu of Tibetan food. I can’t even pronounce the name of what we had but it was chicken curry and dumplings. Very good. 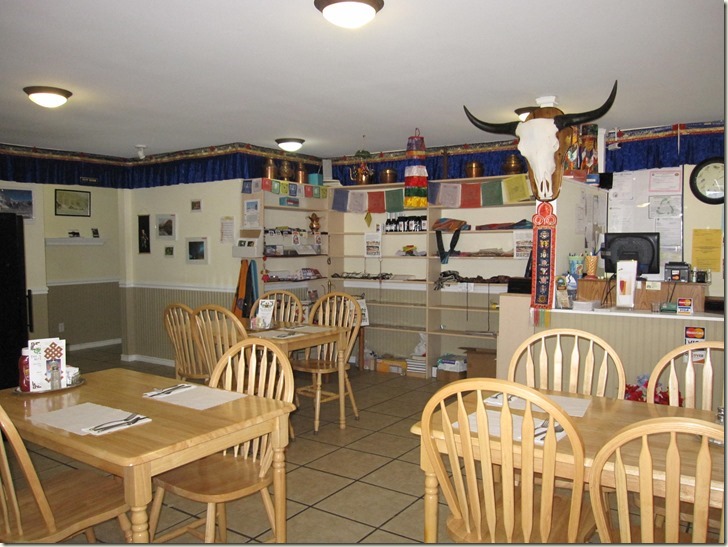 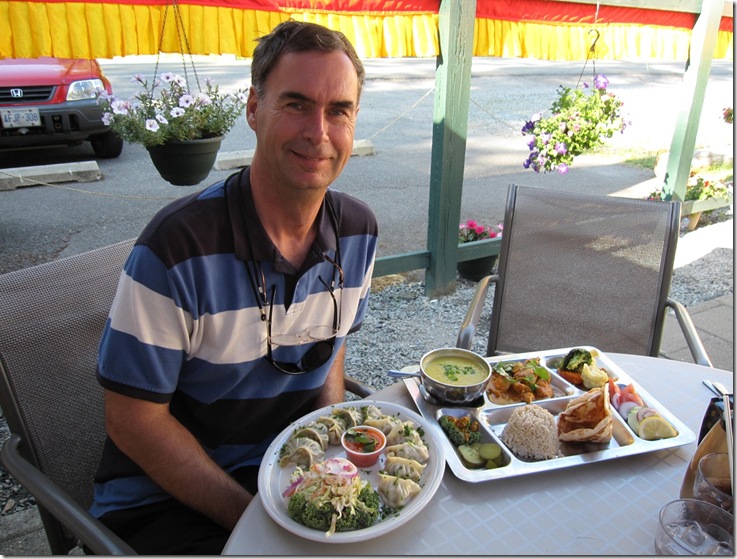