We woke up to a overcast, very cloudy day with a light drizzle. The forecast said mostly sunny and the webcam at the mountain showed the peak above the clouds so off we went on the 2 hour drive south.

It was a very gloomy drive and we wondered if we should just turn around and wait for another day. The clouds looked low so we hoped that we would drive up above them as we got to the mountain.

Nope, we entered but never exited. This is the foggiest drive I have done in a very long time. You could see about 100 feet ahead and that’s it. 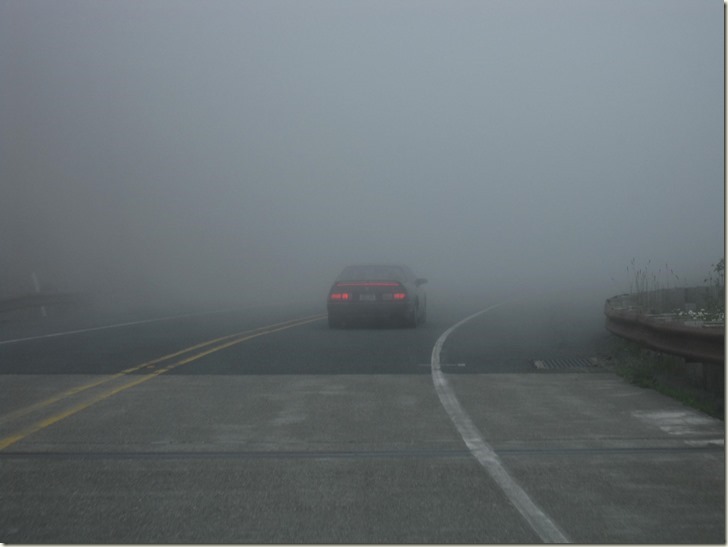 We got to the Johnson Ridge Observatory at the end of the road and found there were above 15 other cars that were as hopeful as we were.

We went in and looked at the exhibits explaining the eruption and then watched a movie about the history of the mountain. The climax was supposed be at the end when the music rose, the screen retracted and curtains opened on a 40 foot wide window which was supposed to awe you with the view of the mountain. Today it was just a white void. Everybody had a laugh.

Some people were actually asking the rangers when the fog would lift. All they would say was that it usually did.

On our way up below the clouds we had seen a hike called the Hummocks Trail. We decided to give it a try and see what happened with the weather. Almost as soon as we got there the clouds started to break up and the sun appeared. We got our first glimpse of the mountain. 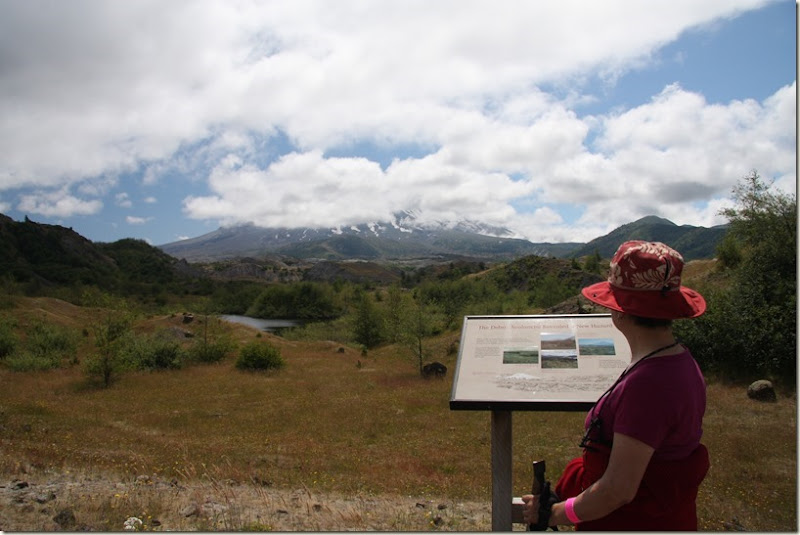 In you don’t know, the sequence of events of the eruption were that first an earthquake happened causing the north side of the mountain to slide down into the valley below in the largest landslide in recorded history. This released the pressure on stored up gasses which blasted out the side of the mountain in a cloud of dust at 300 mph. The ranger said it decimated an area the size of metro Chicago in 180 seconds and went on to a much larger area.

The trail wound among these piles of volcanic material called hummocks, left as the gases blew the material from the landslide around as it went down a river valley. 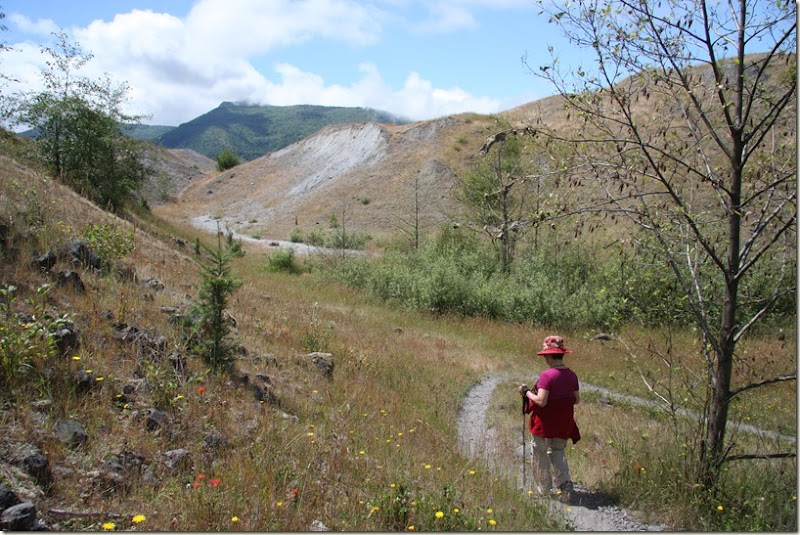 In between the hummocks were ponds and groves of alder trees as nature recovered from the blast. Lots of wildflowers to look at as well. 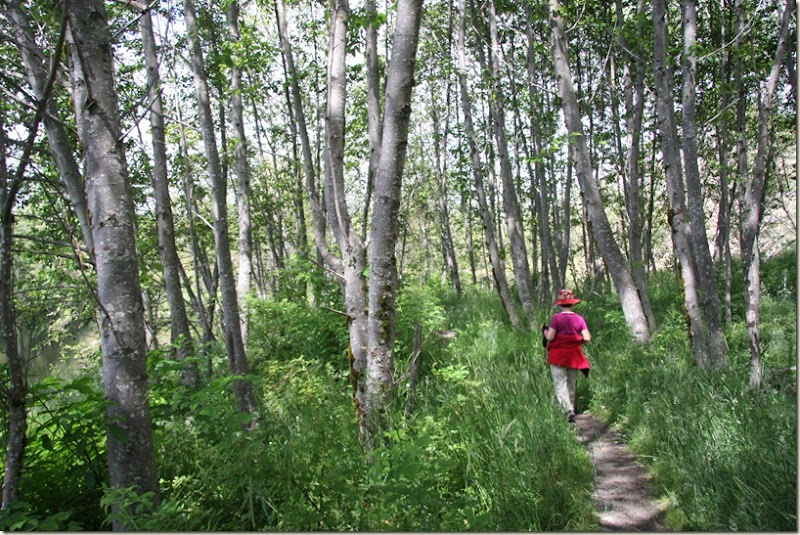 There was a group of people out doing a guided hike. 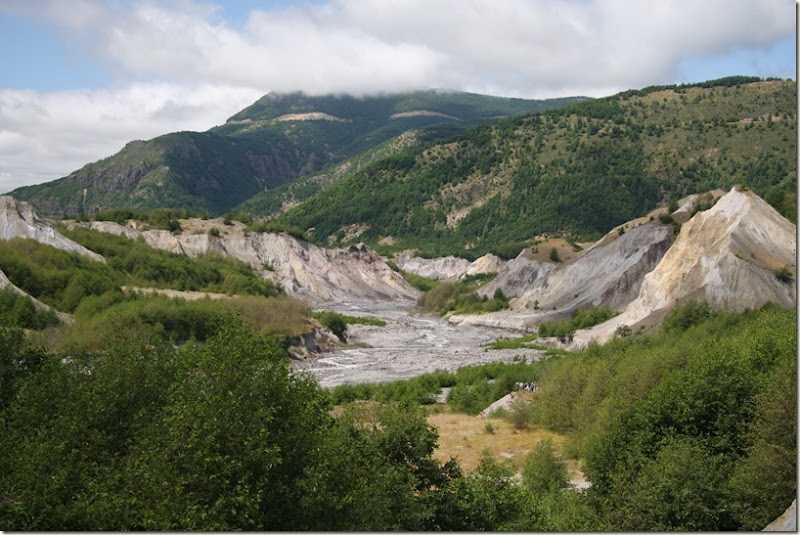 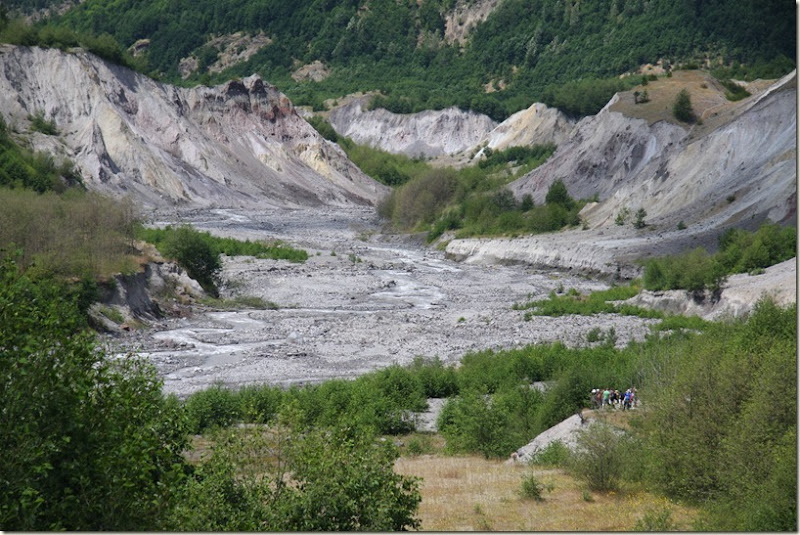 Every chance we got we kept our eye on the mountain. Different parts would peek through the clouds from time to time so we kept snapping pictures never knowing if that would be the best of the day. 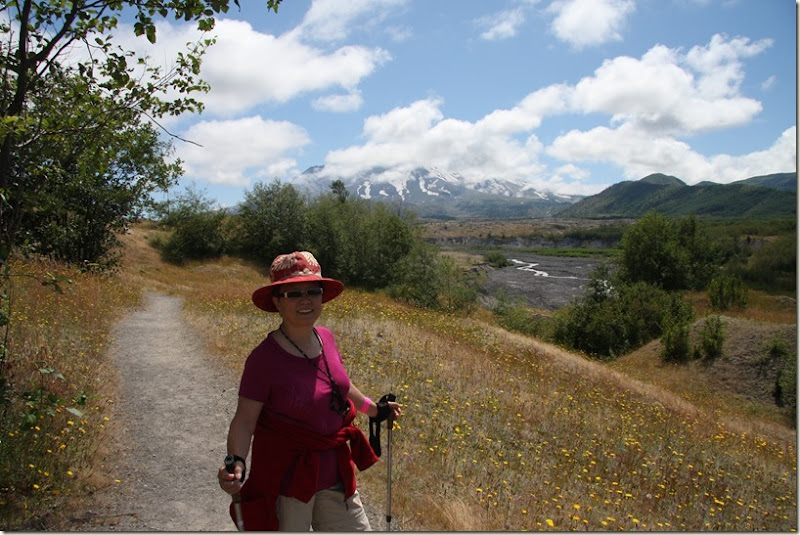 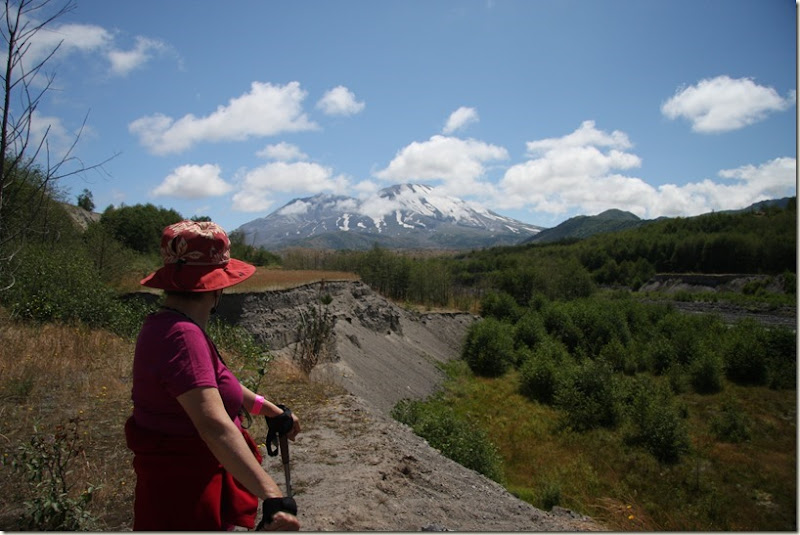 By the end of the 2.5 mile hike it was quite hot and a lot clearer so we headed back up to the observatory.

What a difference. The mountain is 5 miles away but looks immense. Pictures just don’t do justice to the feeling of being there. 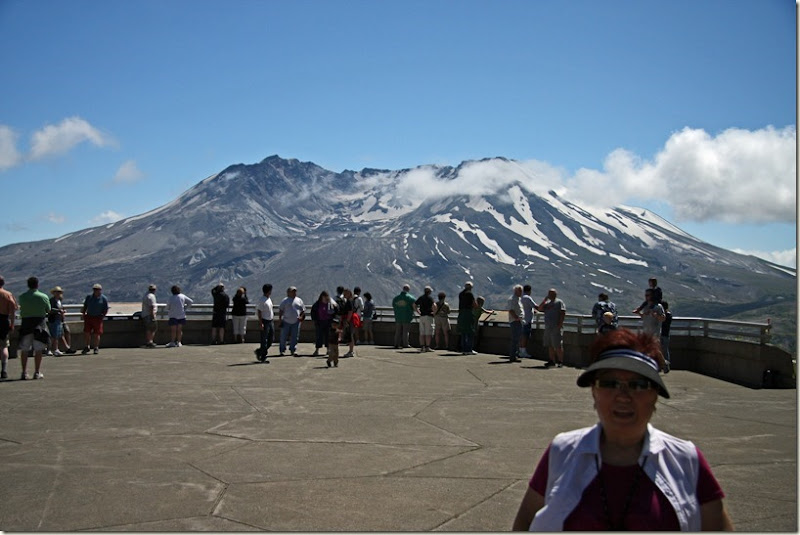 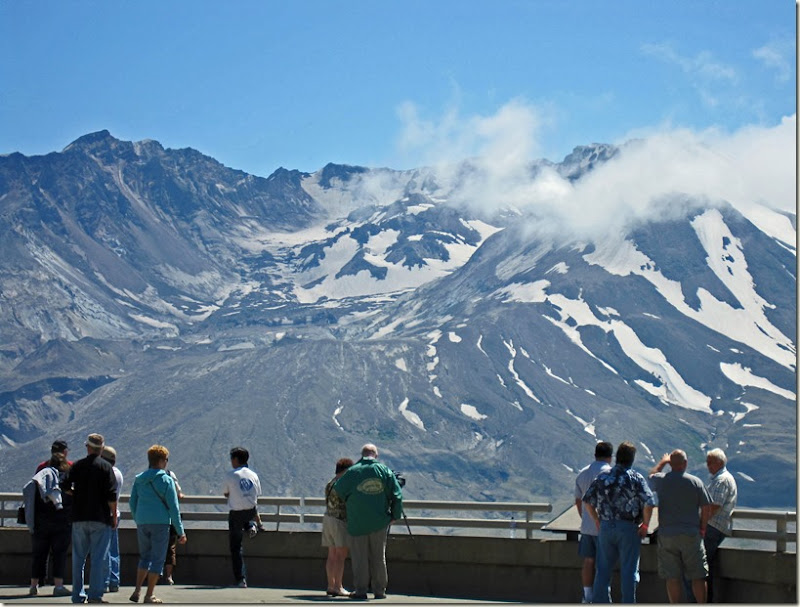 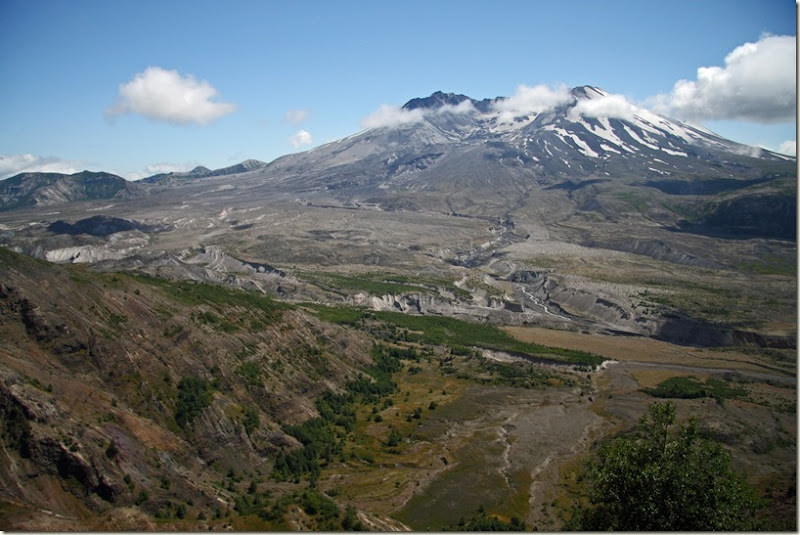 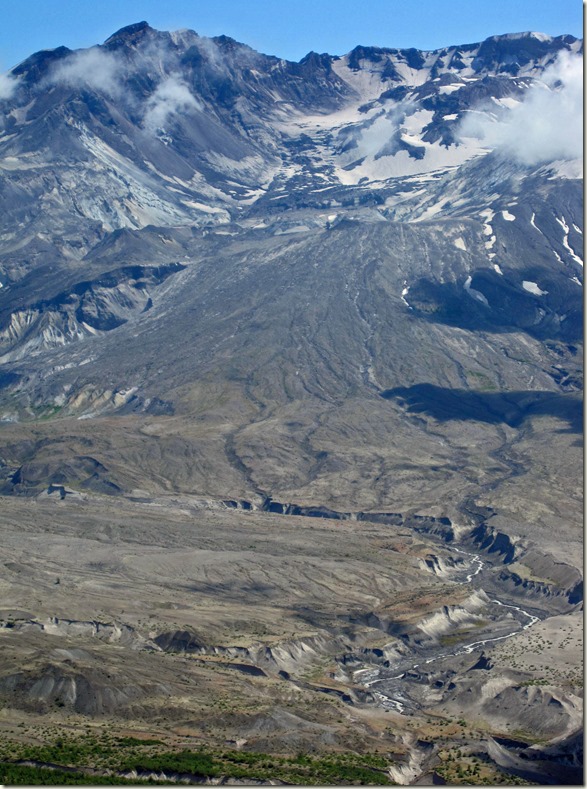 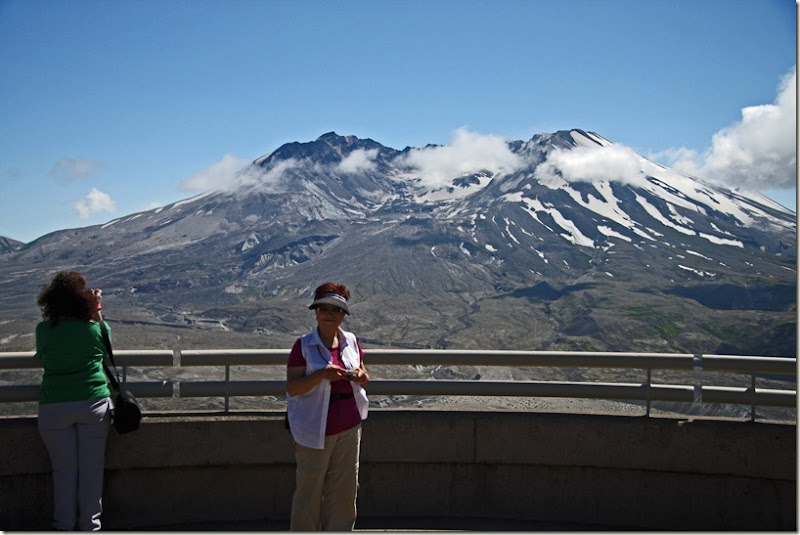 This is one of those places you just have to see for yourself. We mostly just sat and stared. 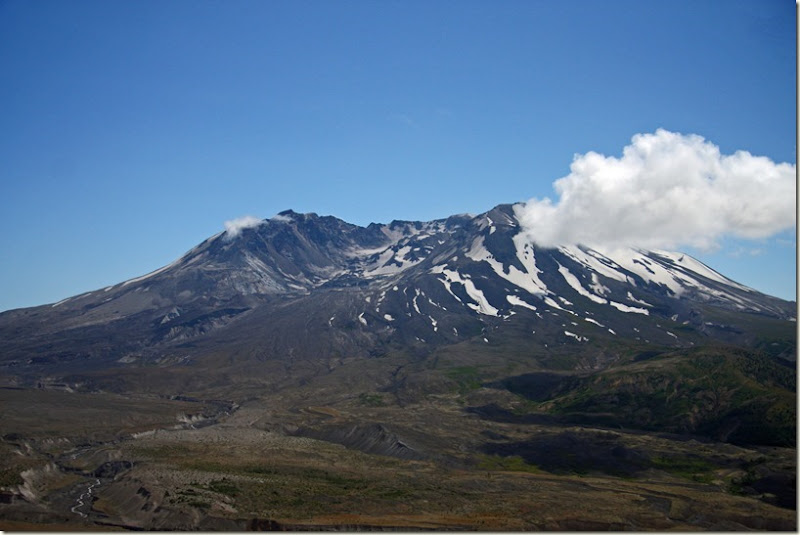 We did listen to a ranger talk about the blast. 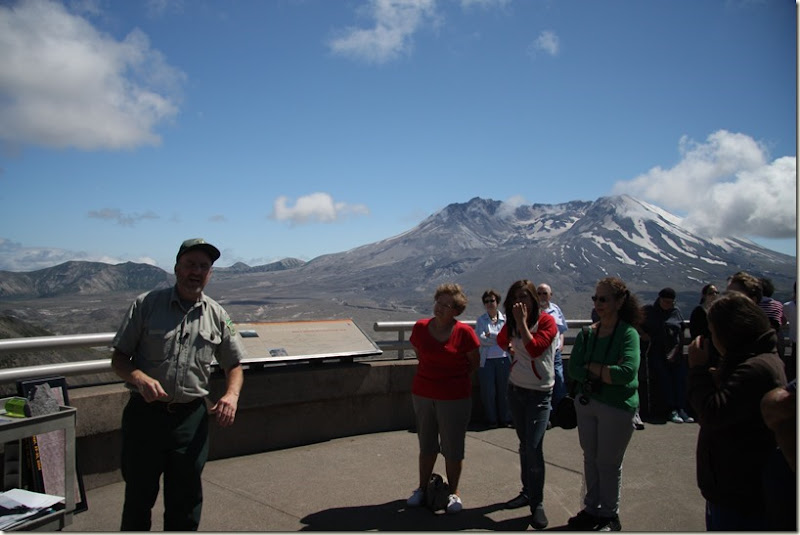 Lots of pathways to walk around. 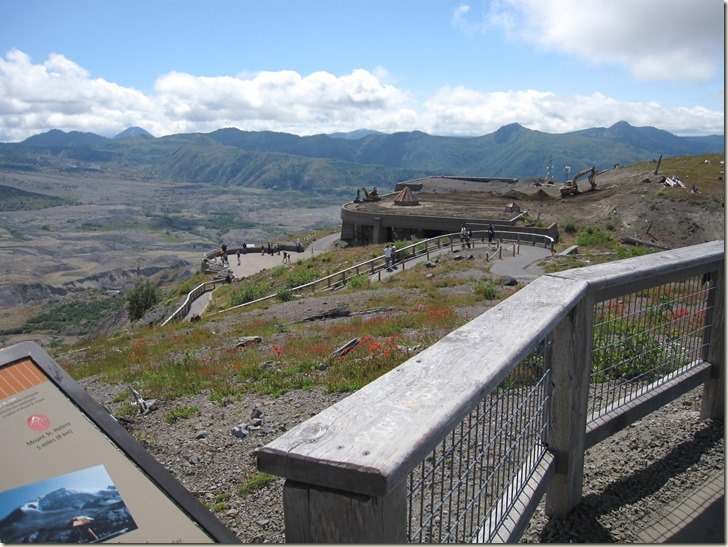 And lots of small wildflowers in bloom. 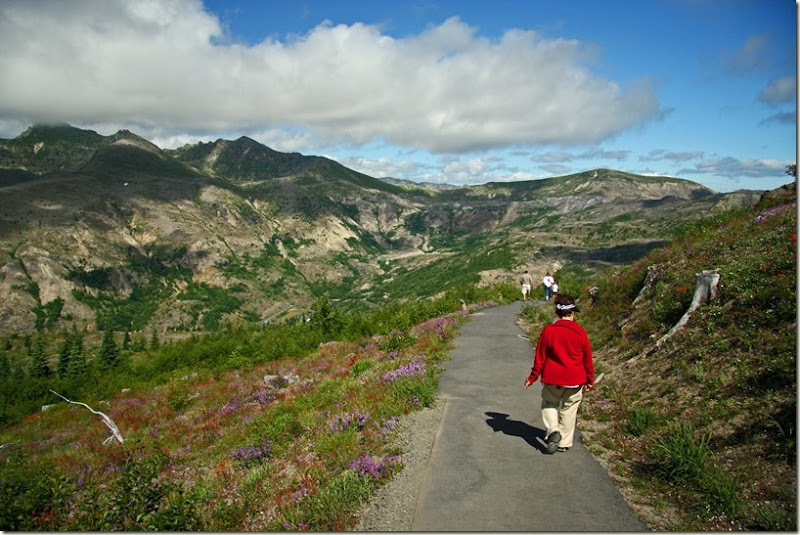 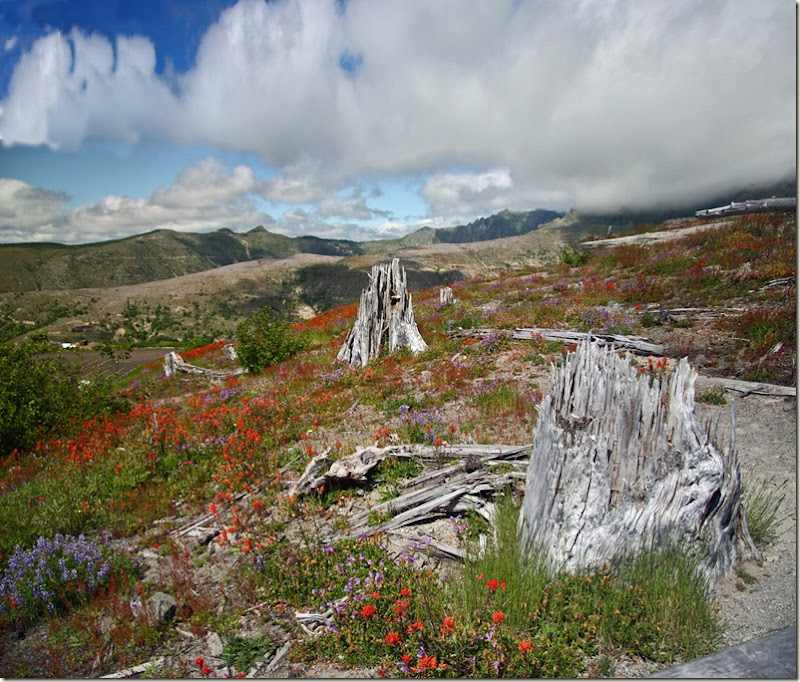 One the surrounding hills you could see the trees that had been blown down, all pointing back to the crater. 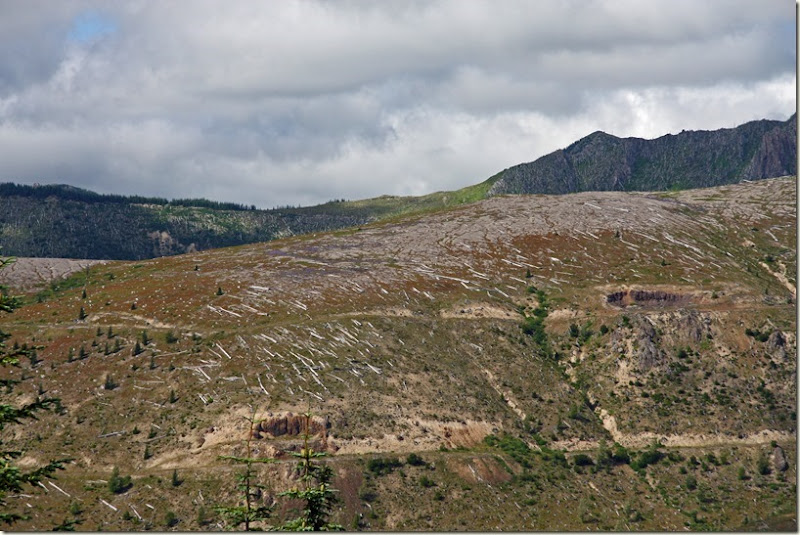 There was an hike to the western access visitors center that you can see in the little notch in the ridge just right of center off in the distance below. It was 8 miles long and followed the ridge line. We thought about doing part of it but by this time it was about 5 and we still had the long drive home. If we are ever in the neighbourhood, we will have to come back. 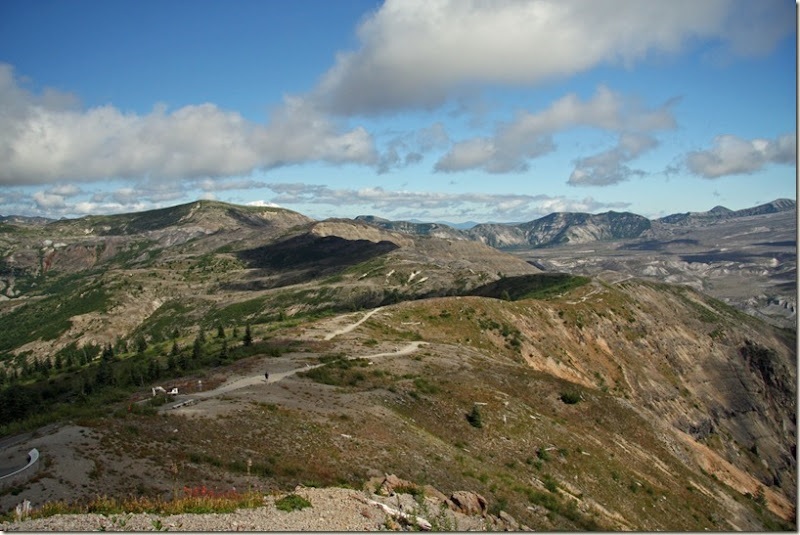 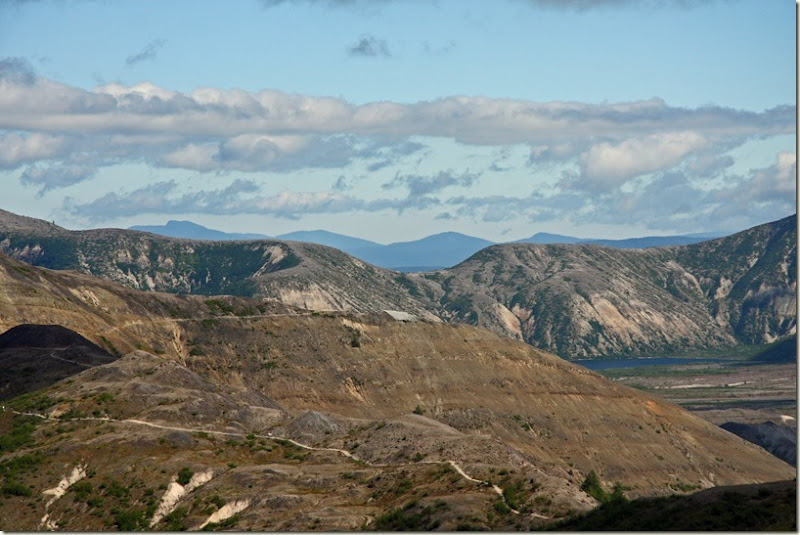 We did have a quick, very healthy, snack before heading home. 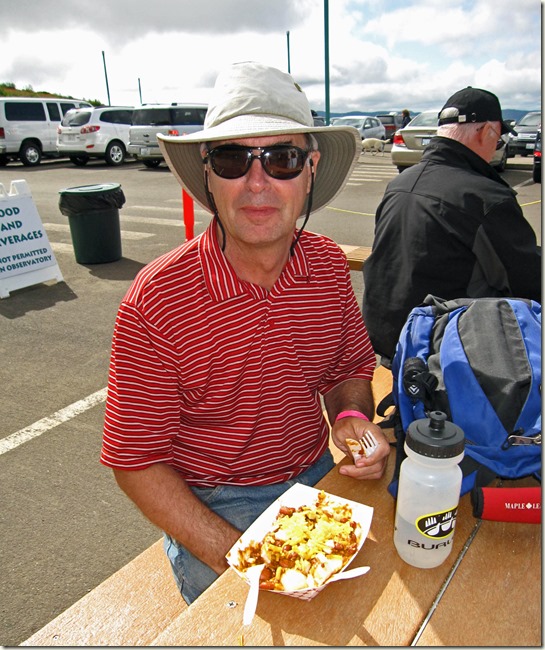 Back over a bridge that we really couldn’t see through the fog in the morning. 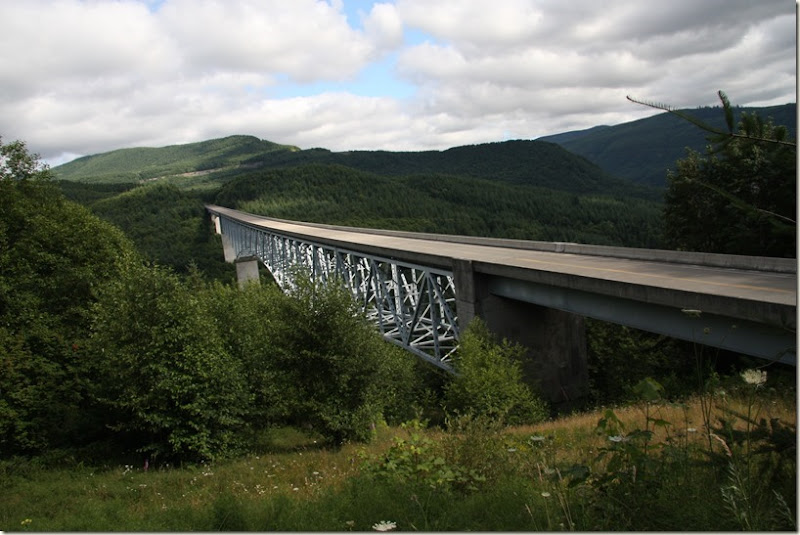 During the rest of the drive back, the clouds got quite thick and dark again. It looked like it might rain.