Another beautiful day and mostly uneventful driving. There were some interesting sights though. Some of the highway pictures may get a bit boring but I include them so I can remember what it was like. Also most of the pictures today were taken through our bug splattered windshield.

More highway off to infinity. I swear at one point we drove about 100 kilometers with no turns. 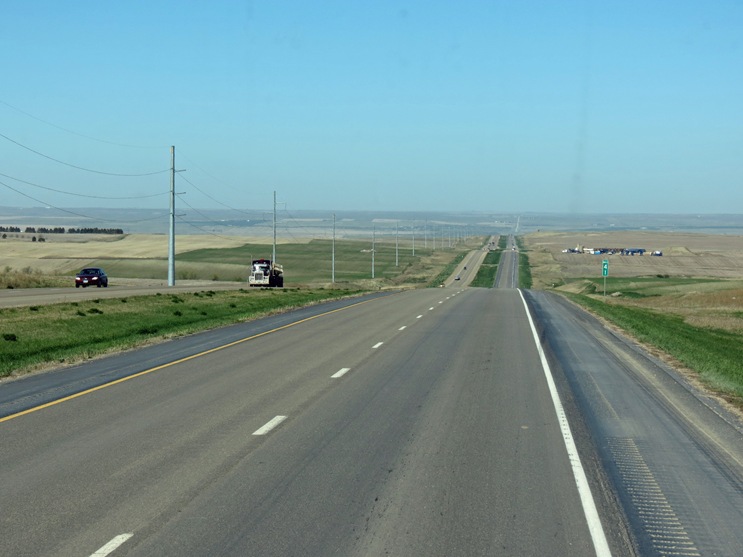 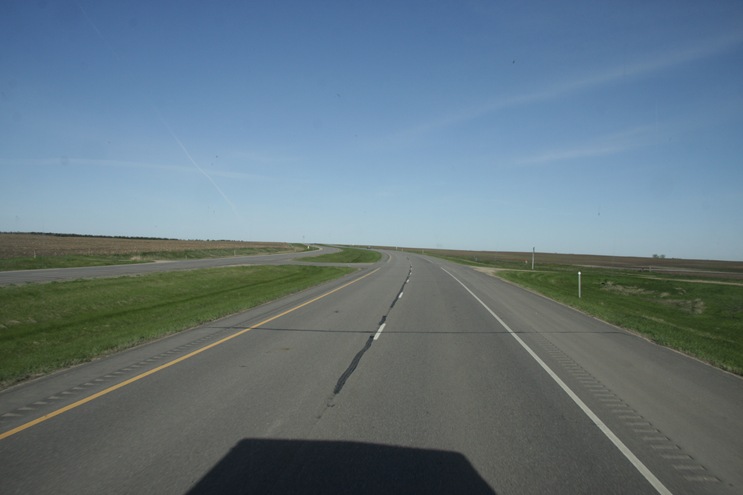 They drive some seriously large tractors on these massive farms. I have never seen one with actual tracks before. 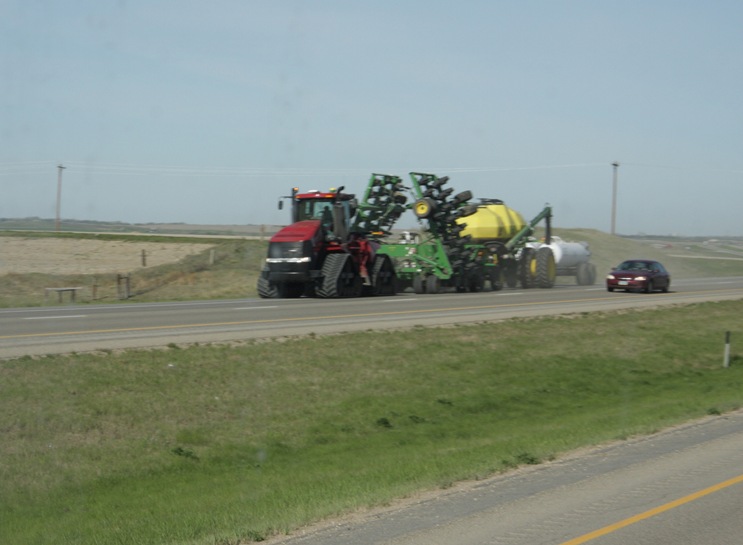 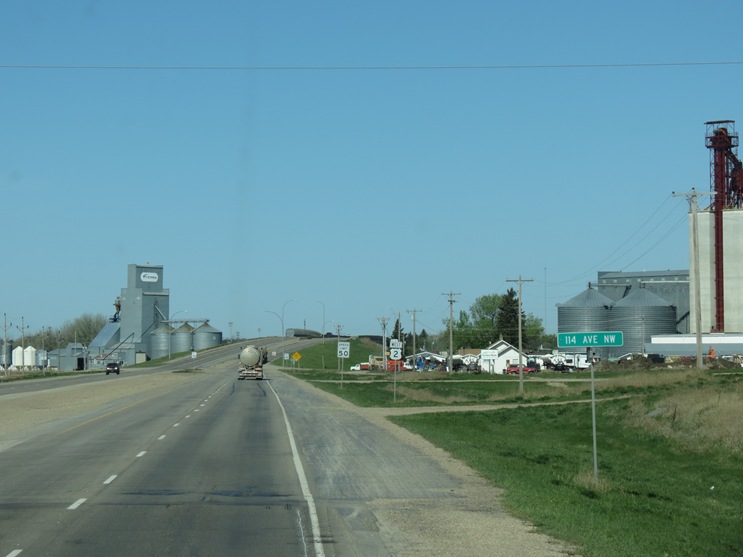 As we got farther west in North Dakota I remembered that they had recently made a huge discovery of natural gas and oil.  We saw a few wells being drilled. 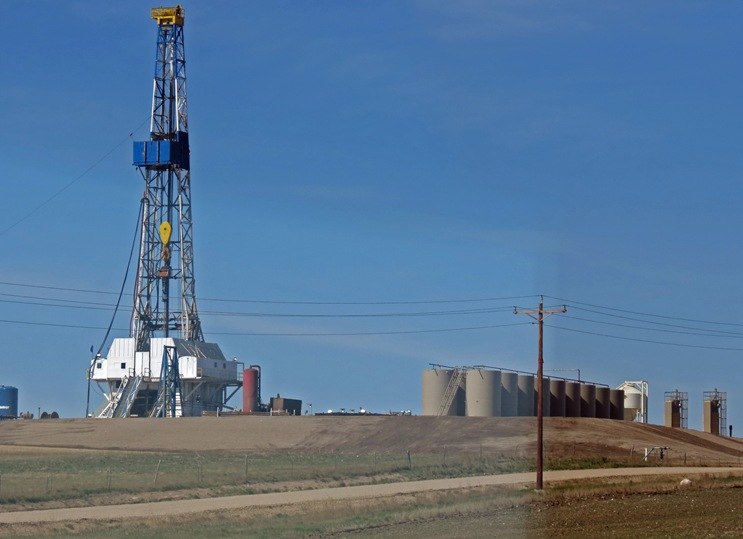 But mostly we saw dozens and dozens of these brand new pumping stations littering the landscape. 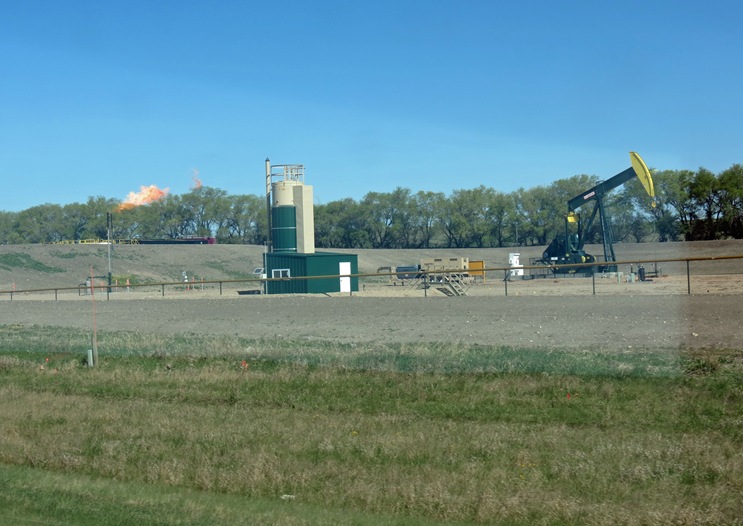 They have tanker trucks go out to each site and empty the storage tanks to bring the gas back to a main depot. 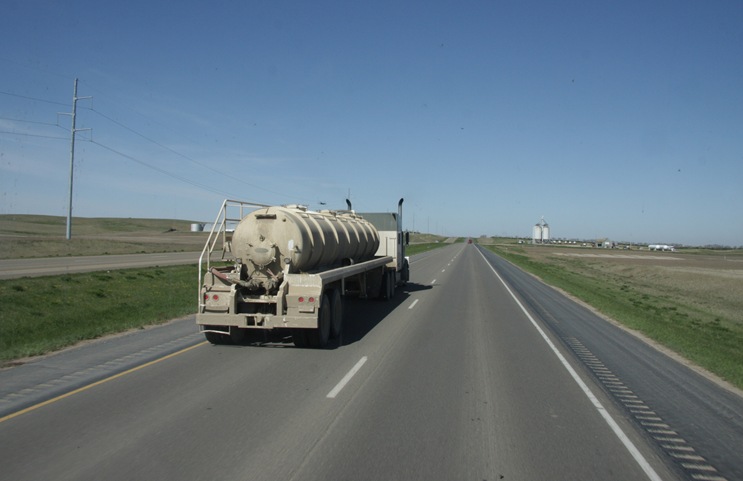 These trucks were everywhere. This parking lot had several hundred and it was one of many. There were also a lot of signs asking for drivers.

There must be a huge influx of workers because we saw many massive lots of what I guess are row upon row of bunk houses just plunked down in the middle of nowhere.

We also saw a lot of “RV Parks” randomly out in the boonies for workers that owned RVs and could stay more cheaply. They were not pretty. 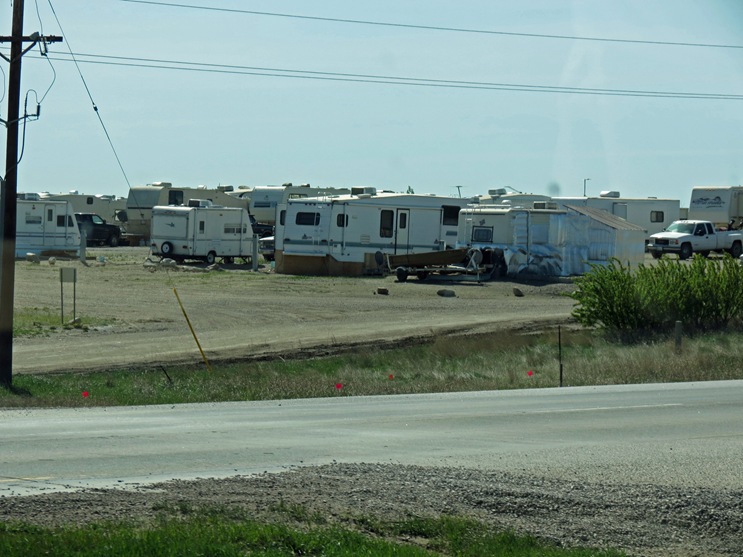 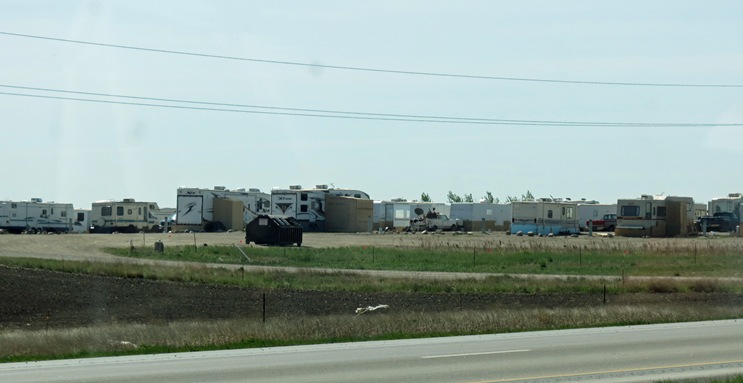 The town of Williston North Dakota must be the center of the boom because there was construction everywhere. Row after row of these cookie cutter houses. 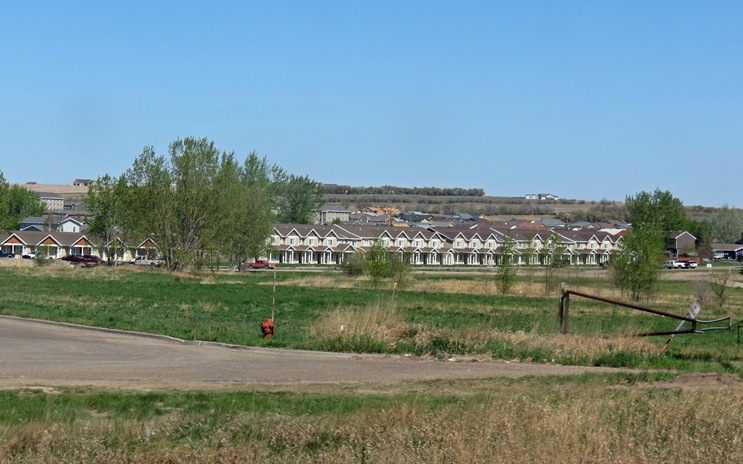 There has got be a lot of money to be made here.

West of Williston the highway went back to two lane and we finally found a pullout where we could stop for lunch. 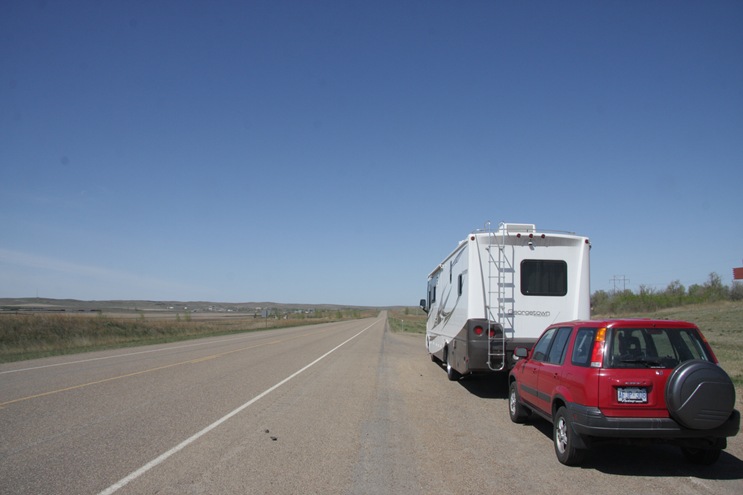 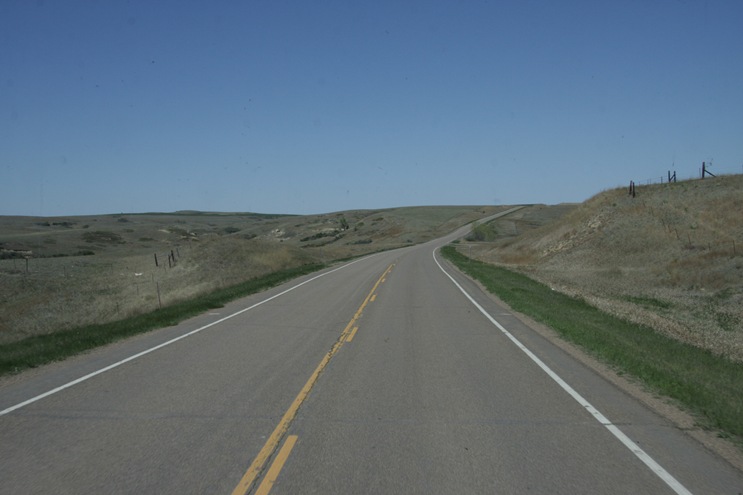 Just before we entered Montana the highway got kind of rough with the lines that jar you every 10 or 20 feet. Then we hit this. Sweet relief! 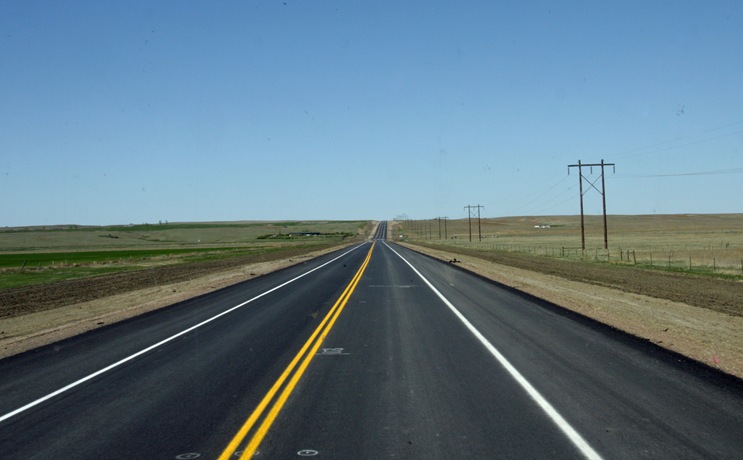 But really new pavement usually means that it is still being laid down so then we hit 10 miles of this. This were some soft sandy spots and with a 10 ton motorhome I did not like that sinking feeling. 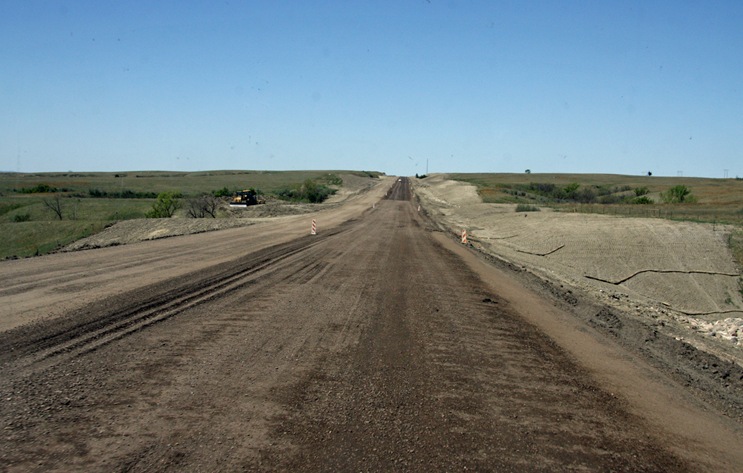 We will be seeing a lot more dirt roads in Alaska.

At another point we got stopped for some more construction. They have a pilot car that shuffles back and forth leading each side through. What a mind numbing job. 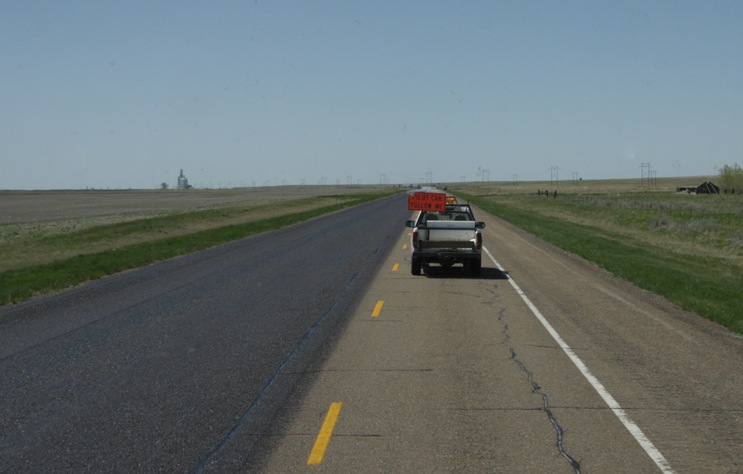 Even worse was the poor lady who sat at the stop light. Her entire job was to tell everybody how long the wait was (ours was 10 minutes) and then to push a button to change the light to green once the pilot car arrived. 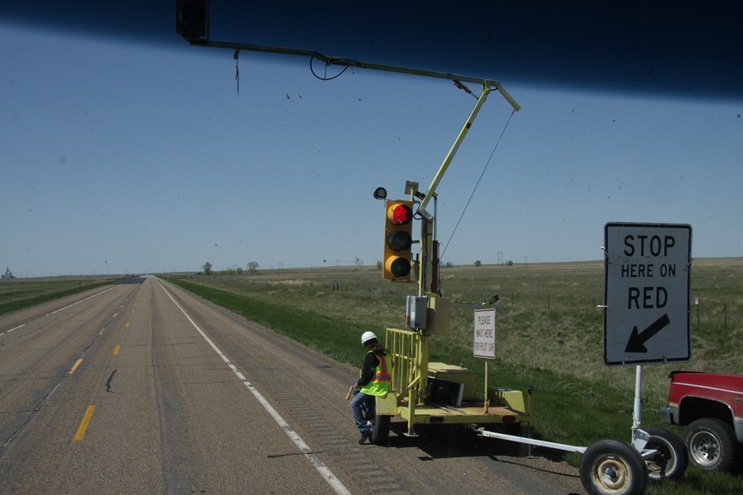 We arrived in Glasgow and got the second to the last site left at this small RV park. It is associated with a hotel and they allow RV’ers to use the pool and hot tub. Very relaxing.

The lady at the desk warned us that it might be noisy tonight as they are having a “Blues and Beer” party. So far we haven’t heard anything. 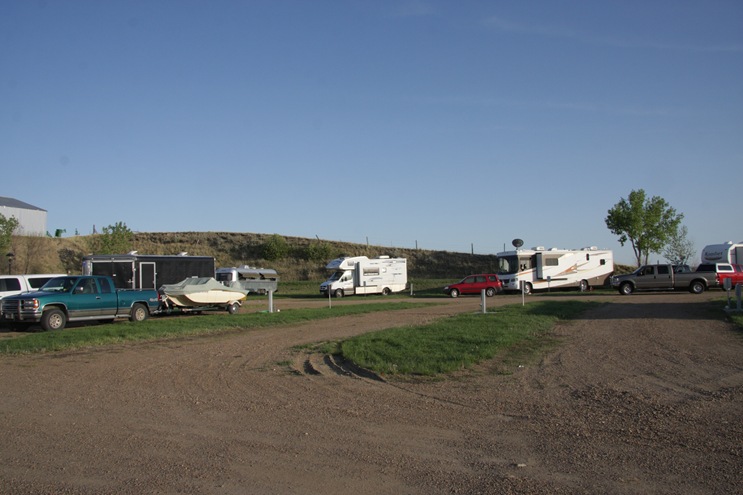