May 1 – Preparing to head North

This year we are heading up north to spend the summer exploring the Yukon and Alaska. I have spent the winter doing a lot of research, mainly reading other peoples blogs about their trips. Everyone raves about the scenery but complains about the roads. The distance from here to Anchorage is about 7000 kilometers so this is going to be a expensive trip with gas prices where they are but we will just grin and bear it.

The general plan is to first head up to the family cottage for a few days to spend some time with my parents, then head west through the States just south of the border (cheaper gas), then up to Saskatoon, Edmonton and finally hit the Alaska Highway in northern BC. At our slow paces I think it will take us two or three weeks just to get there.

During the trip the blog posts may be a bit sporadic. We have Canadian and US 3G internet sticks but the coverage maps up north are quite sparse. We are also hoping to do more camping without hookups to save some money. When you park in the middle of nowhere this is called “boondocking”. When you stay at a campground it is called “dry camping”. We like the non commercial parks and it seems that most of the state and provincial parks to not supply any hookups or WIFI.

The RV has spent the winter in a storage lot about a half hour drive north of us. 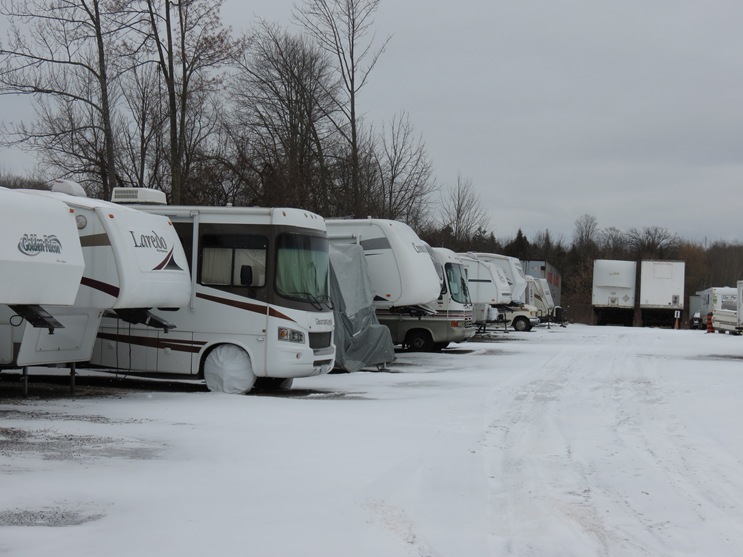 During the winter I went up to it approximately every month and a half to check on its health. I left the batteries in it and before we got any snow I just left the solar panels connected to keep them charged up. After that I disconnected them.

I also read that is is bad to leave the generator idle for a long time and that you should run it for at least half an hour once a month at at least 50% load. I think it has something to do with condensation wrecking the coils. To provide the load I would charge the batteries and bring along a portable heater.

But the real reason was just to go see my baby!

I finally went and brought the RV down to the house last Saturday. We are lucky that we live on the outside of the corner of an L shaped street. It is extra wide here so we don’t obstruct the flow of traffic at all, although I have noticed that people do take the corner much slower with the beast parked there. We also have to be careful going in and out of our driveway. I have to park this far forward because there is a fire hydrant just behind the RV. 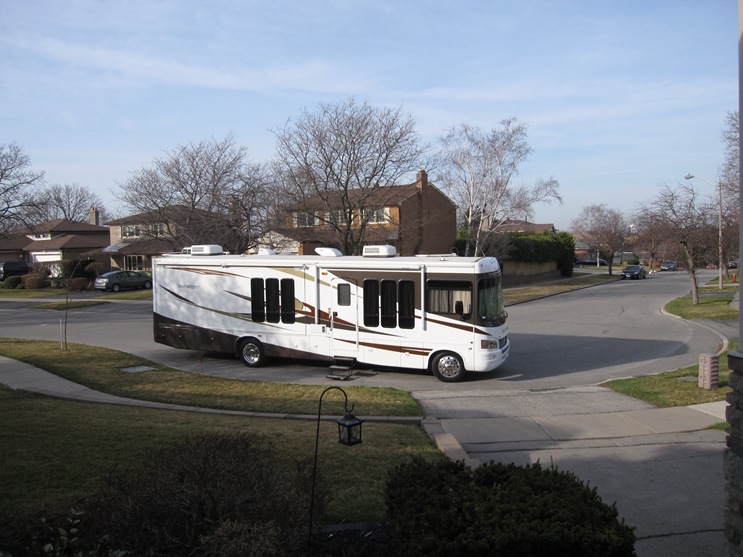 Over the winter I have been planning some mods, mostly to make boondocking more comfortable but some just for convenience.

The first was an easy one. Our daughters had bought us a gift certificate for personalized license plates but we had to choose the name. Since Jennie insisted we use the lucky Chinese 8 we selected: 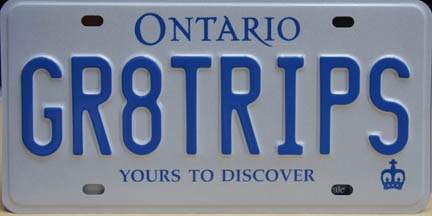 When we used to go tenting with the kids we brought this inflatable alien along. We would prop in up in the woods by our campsite with a flashlight pointing up from the ground to make it seem to glow. Very spooky and got a lot of laughs. 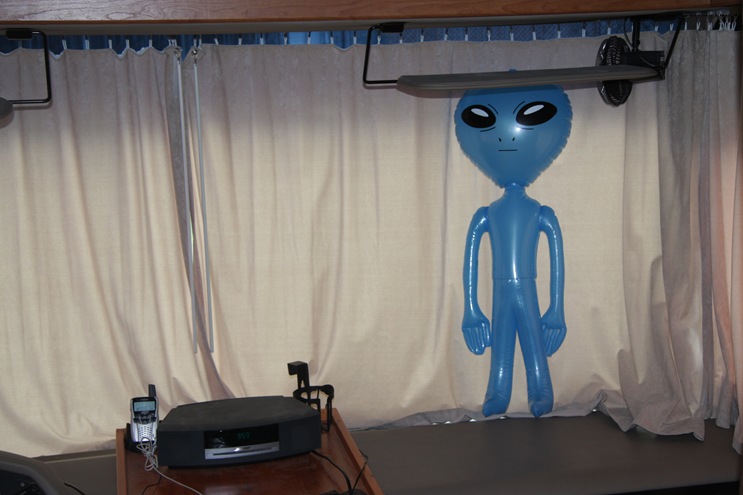 This was a convenience. We broke down and got an automatic satellite for the roof of the RV. You just push one button and the unit uses a GPS to locate itself and the satellites, then has motors to raise and spin the dish point the dish. Its actually kind of fun to watch. Once it gets close it scans around a bit until it find the absolute maximum signal.

I ordered it about a month ago from a company in Quebec. It arrived a few days later in two huge boxes.  I set it up in the living room just to make sure I had all the pieces. The thing is over 4 feet tall when extended. Compare it to the size of the chair in the background of the picture below. 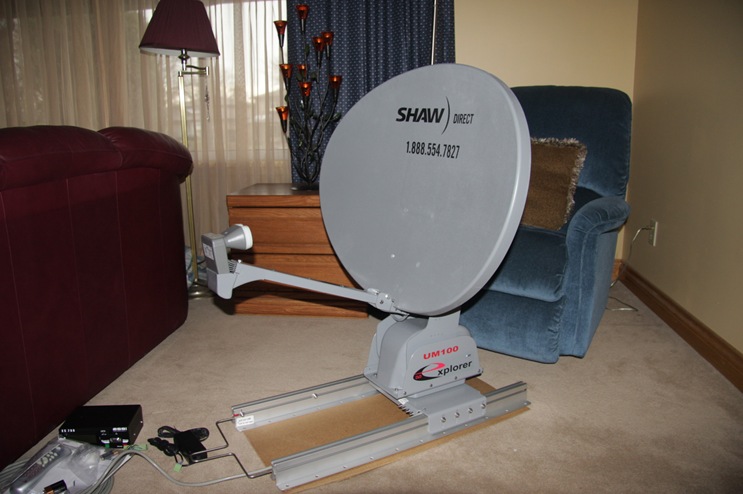 To really try it out I put it out on the porch and connected it to the controller box, the satellite receiver and a small TV. In the first place I put it, it was blocked by a bush and just sat there hunting. I moved it over a bit and it locked on quickly. I am sure the neighbours were wonder what I was up to but I think they are used to it by now,

I think most people get them professionally installed but that would mean I would have to take the RV to the nearest installer which was not close. The dealer said I should be able to do it myself so I gave it a shot. The hardest part was getting it up onto the roof. It weighs about 60 lbs and it kind of awkward to carry. With Jennie holding a ladder up against the side of the RV I basically pushed it up the ladder rails. It was kind of nerve wracking but we made it without incident.

I was nervous about screwing it into the roof for fear of hitting some wiring or ductwork but everything seems to still work afterwards. The Shaw dishes have quad LNBs so I ran four coax cables and the control cable across the roof and then down a hole I drilled through the roof to bring them to the sat receivers. I am only using 3 of them (2 for Jennie’s PVR and 1 for my receiver) but I figured I might as well run all 4. I think there are about 30 screws holding the dish down and another 10 brackets holding the cable down and I just buried them in caulking.

Here are shots of the dish down in the folded travelling position and then up locked onto the satellite. 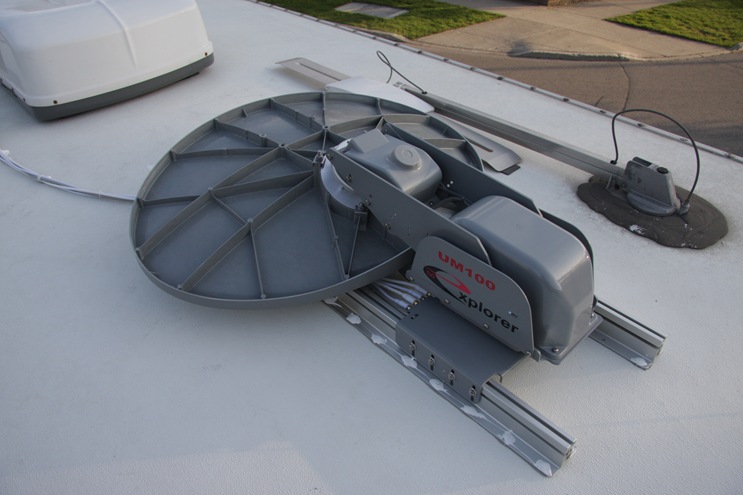 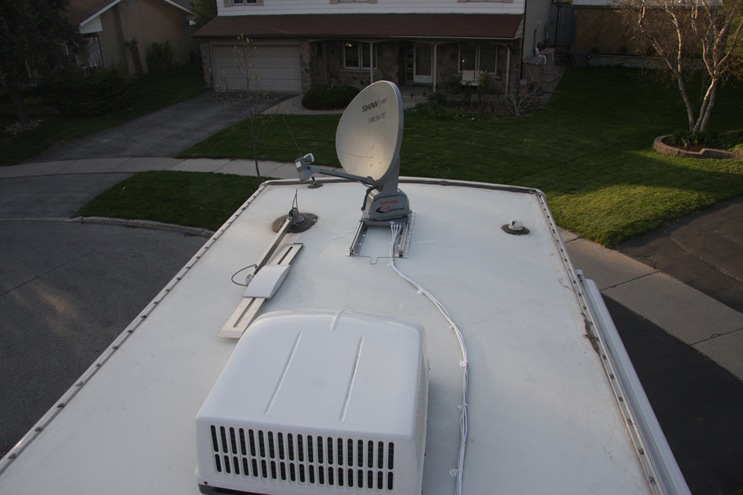 I think I am going to have to clip something to the steering wheel when it is up so I always remember to stow it before we move.

I am still taking our portable dish and its tripod because there will be many places where roof dish will be blocked from seeing the satellites by trees at the campsite. With 100 feet of cable on he portable dish I can usually find a hole somewhere.

To help setting up the portable dish I bought this great app for my iPad. It superimposes the location of the satellites on the image from the iPad camera so you just walk around pointing the camera until you have a clear view of the satellites. I sure I will look a bit goofy waving the iPad around but it sure will make things easier. Kind of a lousy photo but you get the idea. 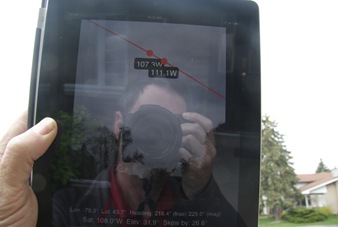 I wanted to have more capacity to run thing without a electrical hookup so I bought two more 6 volt golf cart batteries to give us a total of 440 amp hours of which you should never use more than half (read my “Life in our RV” post on the electrical system). In a night with normal TV viewing we use about 60 amp hours. The solar panels should be able to replace this on a good sunny day but if we get a string of cloudy days the extra batteries give us more breathing room,

The main problem was figuring out where to put them. The first two are in a tray out in the open underneath the step. I wanted the new ones to be close so as to minimize the cable runs and associated losses. The batteries are also quiet heavy. Each one weighs 62 lbs. The other problem is they are normal flooded lead acid batteries that give off highly flammable hydrogen when used and charged so they need to be vented and kept away from any sparks.

I crawled around underneath but could not find a spot to mount another tray so I gave up and put them inside one of the storage bins next to the stairs. I built a very sturdy floored wooden box and strapped the batteries down and bolted the box to the bin floor.

It looks very home made but It should be OK.

The furnace that comes with the RV is very inefficient. It sends a lot of the heat out the side of the RV thru the exhaust port. The fan in it also consumes a lot of battery power. It is also not at all feasible to use electric heating when on batteries.

The solution that many people use is a propane catalytic heater. We bought one called an Olympian Wave 6, 6000 BTU unit. The propane burns against a pad covered in platinum. The platinum acts as a catalyst to burn the propane with oxygen to produce. water vapour and carbon dioxide. They are safe to use indoors as long as you crack open two windows/vents, one low and one high. The heater does have a low oxygen sensor that will shut it off. 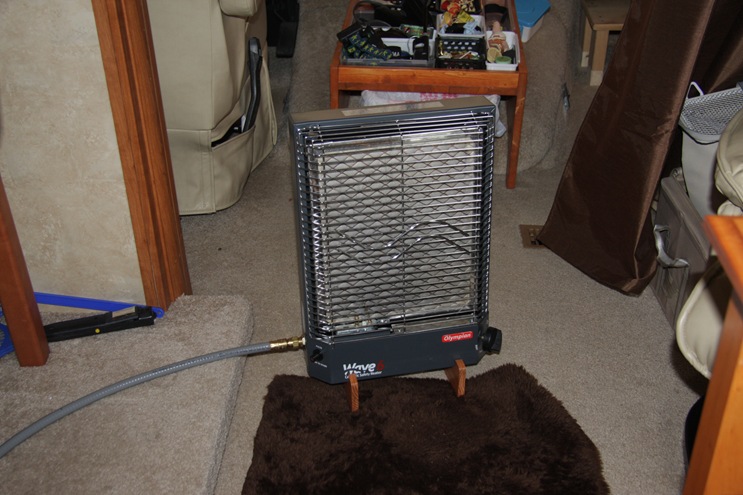 They are said to be 99% efficient and when running you just see a dull red glow from the platinum pad. They heat by emitting infrared waves so the air is not directly heated but you and any other solid objects absorb the infrared and radiate the heat out to warm the air.

There was a place in the states that sold a nice kit that had all the fittings to tap into the propane lines in the RV but when I tried to order on they said they didn’t ship to Canada. It took me a few week snooping through the local Home Depot, Lowes and Rona to find the necessary parts. I T’d into the line feeding the refrigerator and then added a hose with a quick disconnect fitting to go to the heater.

We haven’t tried it on a cold night actually in the RV yet but it sure is warm standing into front of it.

I made a bunch of other small changes like converting more of the lights to use LEDs and adding an outlet with a heavier gauge cable for our electric heater.

We plan to head up to the cottage tomorrow but there may be a wrinkle in our plans. About a week ago I noticed a strange charge on our Visa bill. I called up to dispute it and the next day got a call from the loss prevention people that there had been two other charges totaling about $2000. They closed that card and sent me another one that arrived in a few days, Then yesterday afternoon  we got another call that someone had managed to call in and change the address and phone number on our account so they could order new cards. They closed the account which meant that both mine and Jennie’s cards are no longer valid. I told them that we were leaving on a long trip on Wednesday and they said they would get the cards to a local bank by tonight. We’ll see.

In hindsight, the so called security questions they ask when you call in are pretty ludicrous, which anyone that had enough info to make purchases with the card would know. At least now they added a password, that I supplied to the account that must be given on each call.

So after a goodbye dinner with our daughters tonight, we are hopefully off tomorrow on this year’s adventure.