Since it looks like we may be heading back to winter for a bit we decided to get some summer while we can and spent the afternoon in the water park at the mall. This is the first time I have ever been able to just pay the senior’s rate (55+). It’s nice to save a few bucks.

The park has an enormous wave pool and I am not even sure how many water slides. A guess would be 15. The lines ups weren’t too bad. Some were walk on and the more popular ones were around 5 –10 minutes. There are two tubes rides at the far end that we tried once but most of the slides are on one very complicated tower. We had a lot of trouble getting to the slide we had chosen each time. We had to constantly try and stare upwards to find the launch area and pick the right set of many stairs. There may have been a plan to it but we never did figure it out.

There are no pictures of us because I didn’t take the camera in until we were done getting wet. 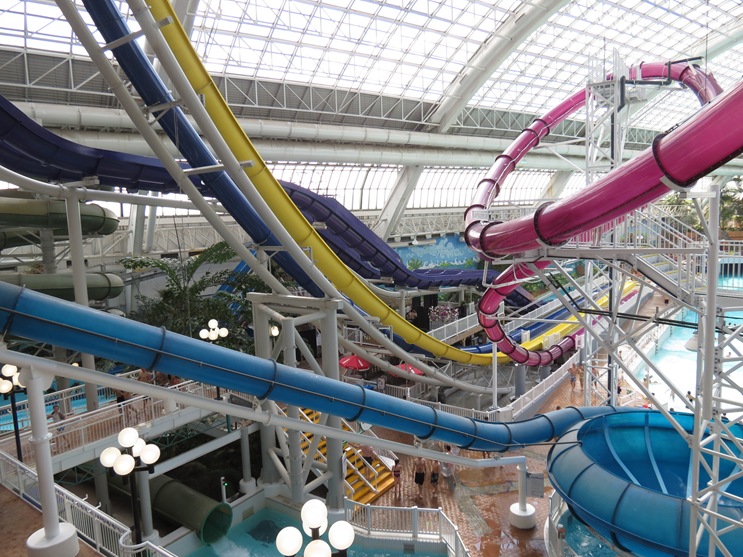 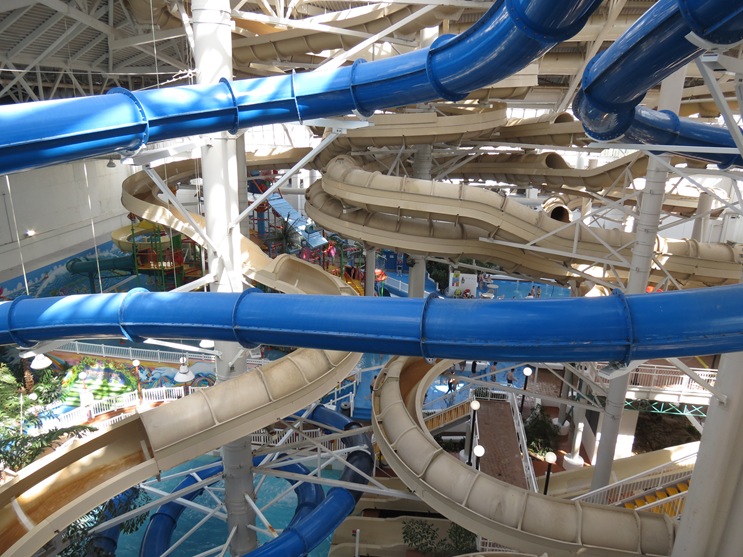 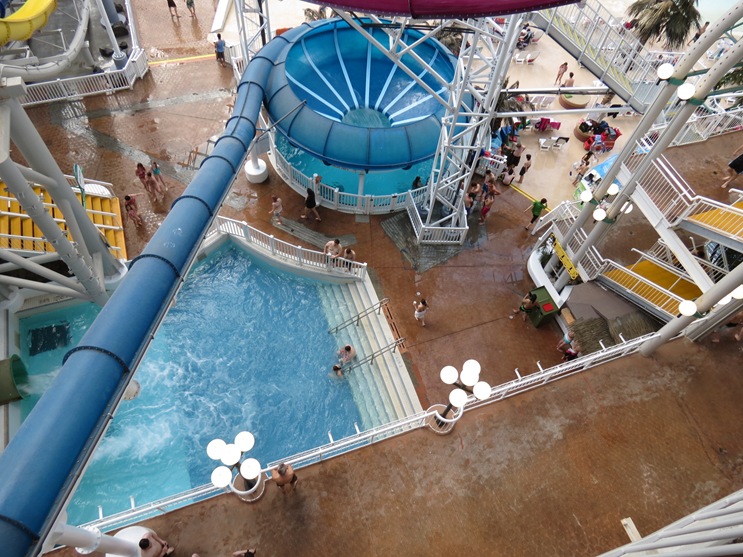 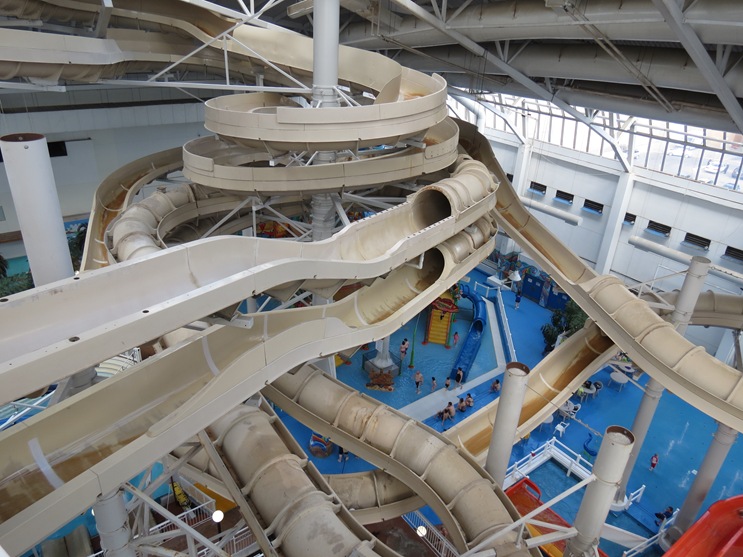 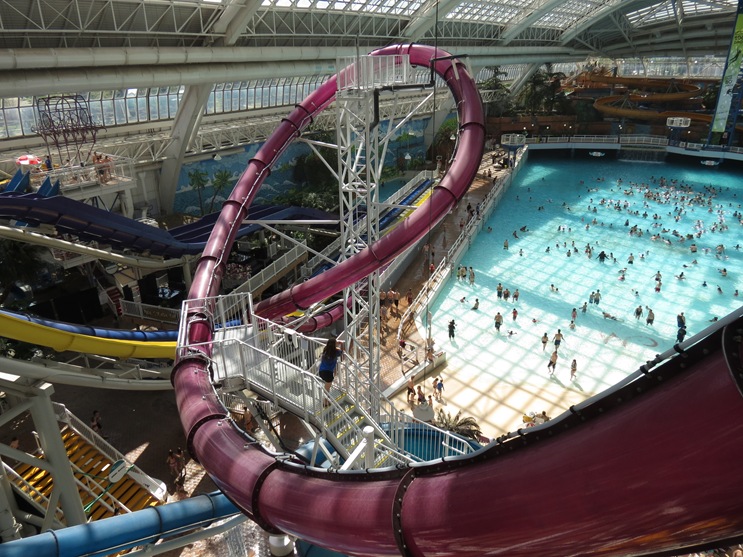 and the yellow and blue ones. 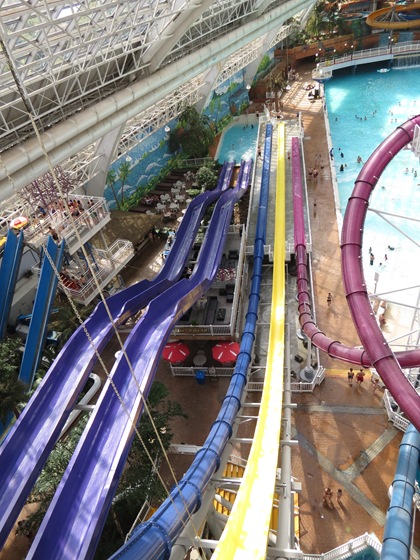 For these you got into a plastic booth, a countdown begins and then the floor drops out. No thanks! 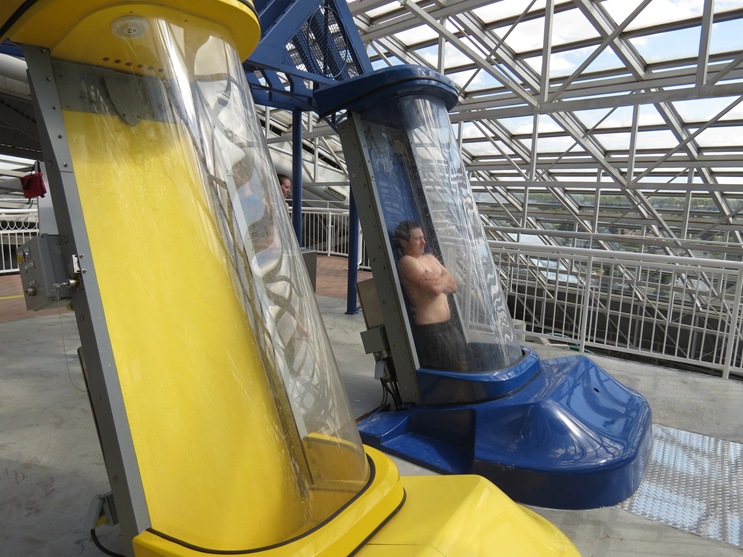 I think I scraped my elbows on the purple one. One each of the bumps you lift off a bit and I guess I panicked a little and uncrossed my arms. 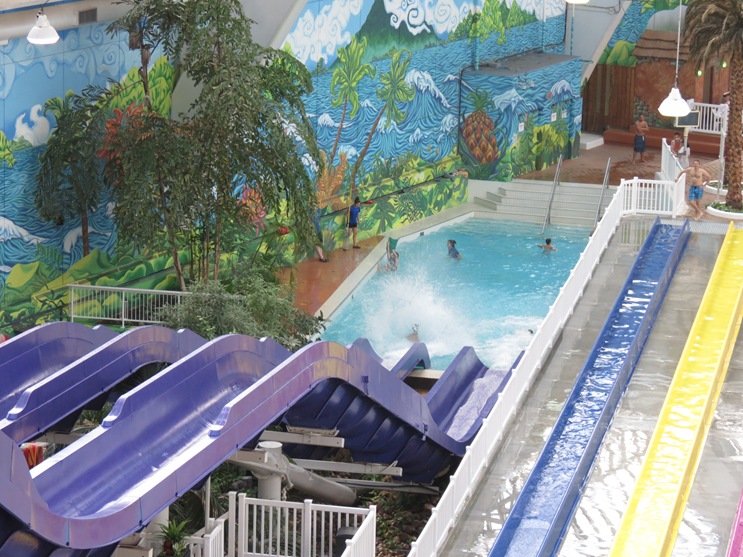 We even tried one where you rode a little sled and skidded across the pool at the bottom. 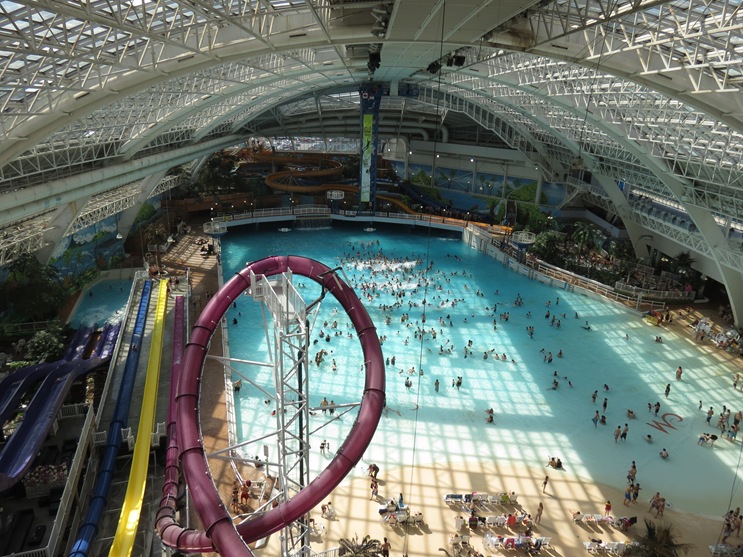 The blue column in the middle at the far end is a bungee jump tower. We did not partake.

We did spend some time in the pool but you can’t relax for very long. 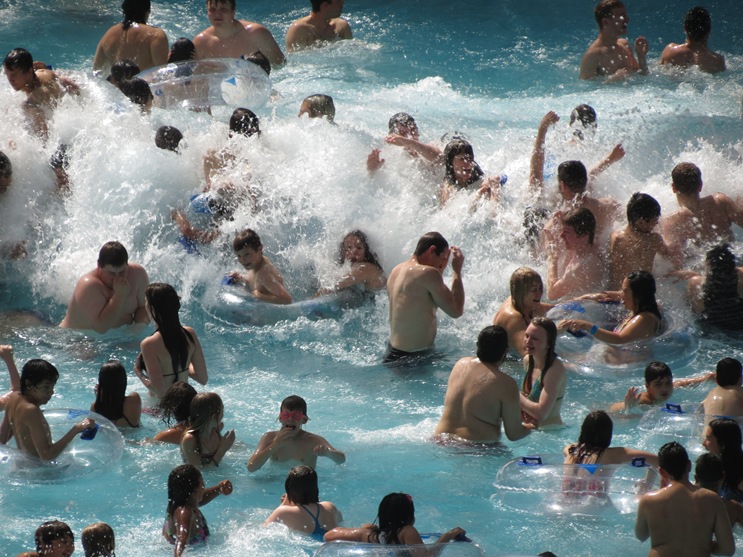 Yesterday we didn’t find the amusement park section so today we wandered over for a look. They don’t waste a lot of space in there. 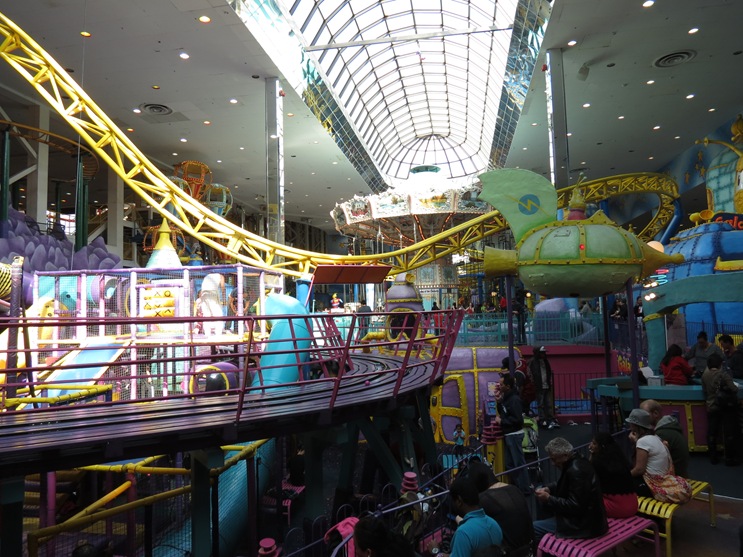 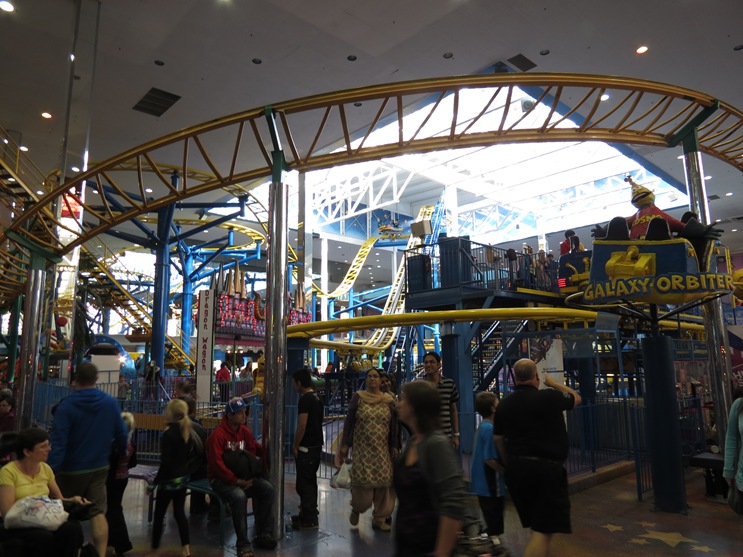 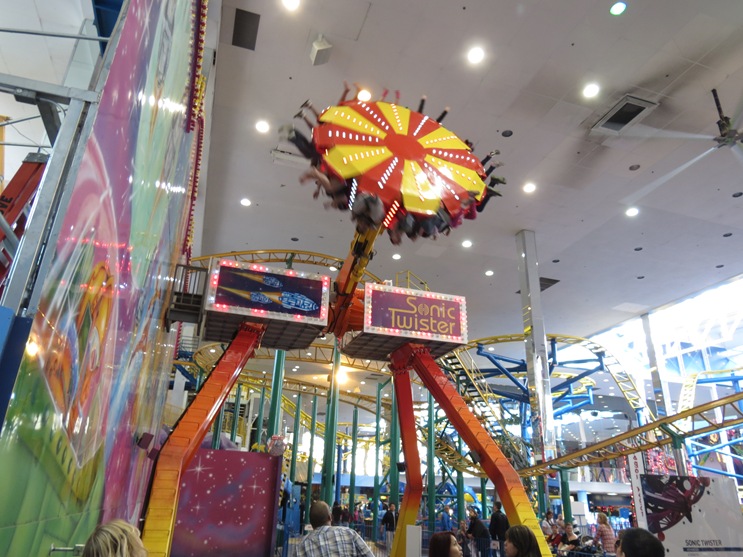 One part had a very interesting triple looping roller coaster. 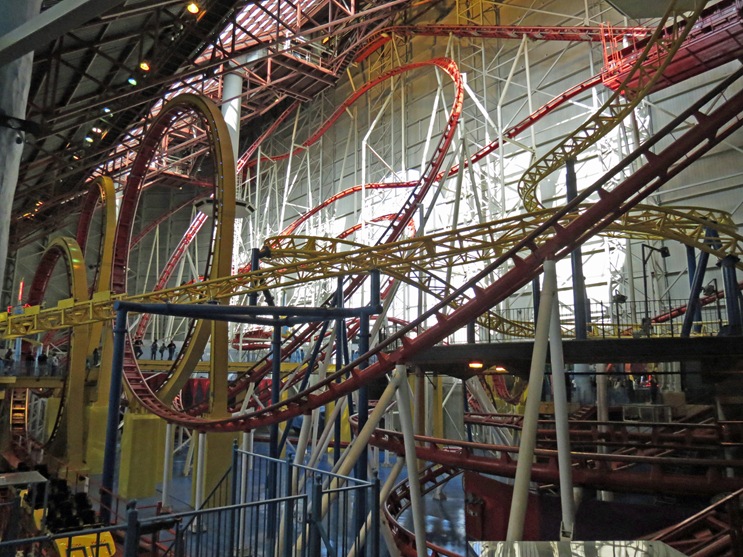 Being indoors somehow made the cars seem that much higher and farther away when they were at the top of the hill. We would have liked to try it but to get enough single ride tickets for us to just go on this one would have cost about $20. The day passes for this area would have been $50 but there was really only one other ride, another coaster, that we wanted to try. We were kind of tired as well so we just watched.

They had a walking bridge through one of the loops. 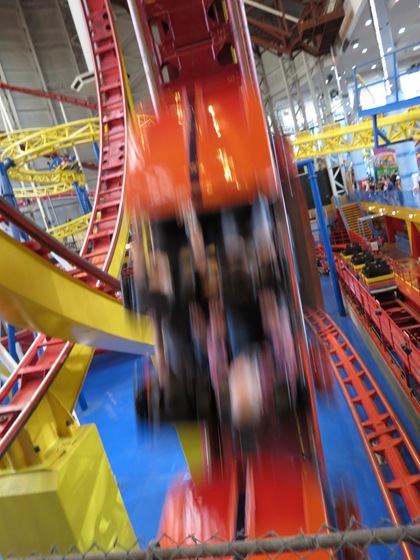 Afterwards we just stocked up on groceries in preparation for heading farther north tomorrow.