We probably should not have done the hike I chose today.

First, it was at the end of a long dirt road so the CRV took another beating. After we left the pavement it was 1400 m (about 4500 feet) of climbing on 32 km of differing grades of dirt road. The first 10 km were very wash boarded because the logging trucks use this part a lot. The next 10 km were actually pretty good. The last 10 km were very rough, 5-10 kph slow. There were no large rocks or ditches, just some potholes and a lot of small rocks sticking out.

Second, it was likely that no one else would be around for miles and we didn’t tell anyone where we were going. There is no cell coverage but we do have a personal locator beacon that can send a signal to the search and rescue satellites if things went really wrong. I think from now on, if we go somewhere like this, I will send an email to relative with our plans and then another when we get back.

Third, it was even more smoky today so there would be no long or even medium distance views. This was really too bad because the trailhead was at 1800 m (6000 feet) elevation and the road near the top was very open. We would have had some amazing views of the Columbia River and all the mountains around us.

Fourth, there were actual fires in the area. On the way in, the only vehicles we had seen were some forestry trucks parked at the side of the road. We suspected that there were fires because during the drive could actually smell the smoke, although we could smell smoke in town as well.. On the way out we passed a fire crew on the road that said there was a small under control fire just above the road. Farther down, we could see some more fires burning on the mountainside opposite the road.

Anyway, we did the hike. It was a long drive, especially coming home after the hike.

Note that at no time during the hike did we see any signs of a fire nearby or smell any smoke at all. The air around us was actually clearer than in town. Although I am sure the rangers thought we were idiots for being there. 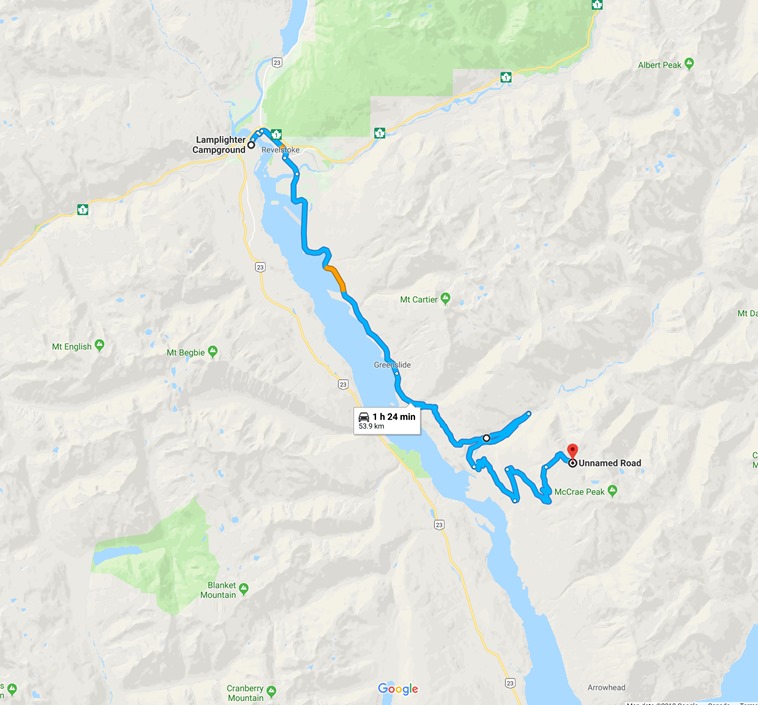 We passed a few clear-cuts on the way. 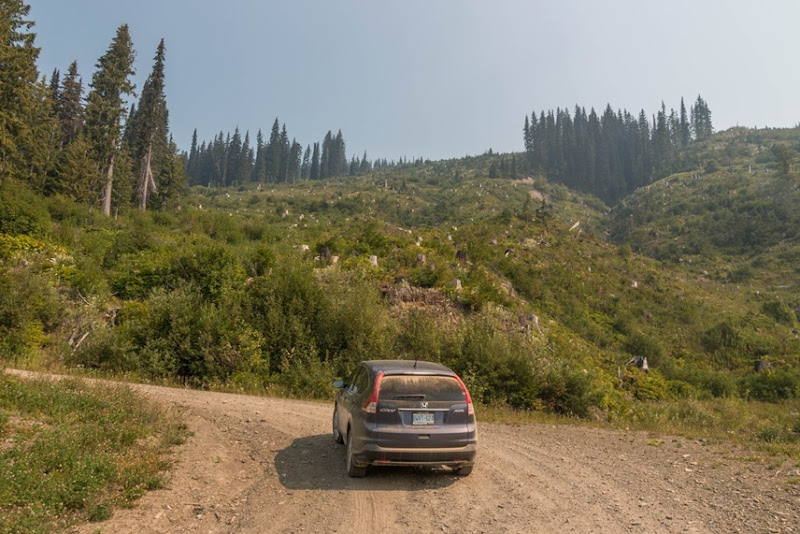 This shot was taken as we neared the trailhead. I think there are mountains over there. 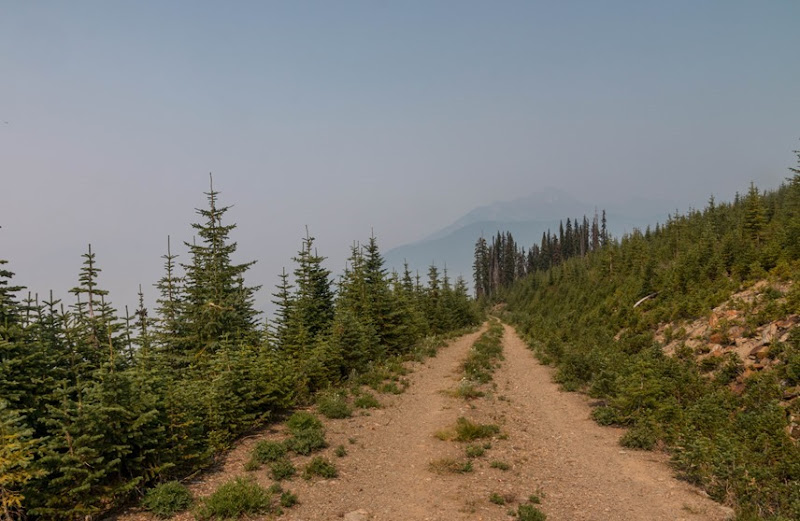 Looking down we could see a layer of thicker smoke below us, which was probably from the fires we passed. 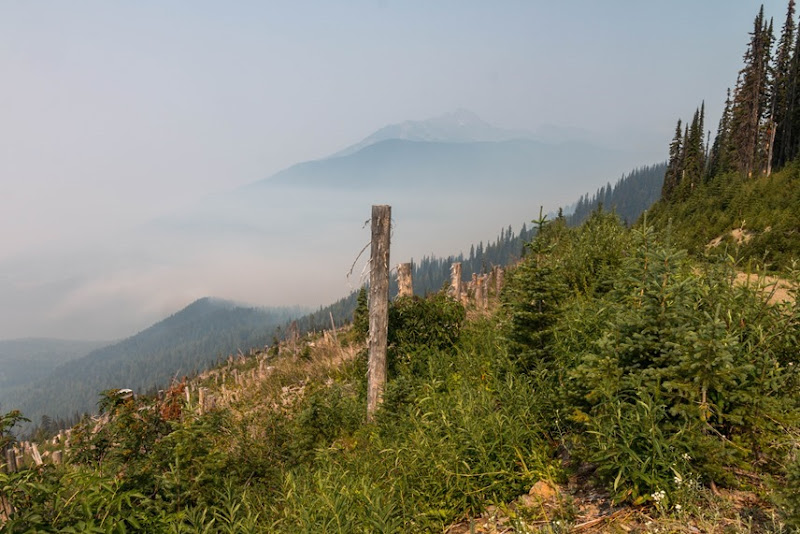 From the specs I read, it seemed like we could easily handle the hike, 7 km and around 200 m in elevation but that gain was from the trailhead to the lake, which didn’t take into account the ridge in between. 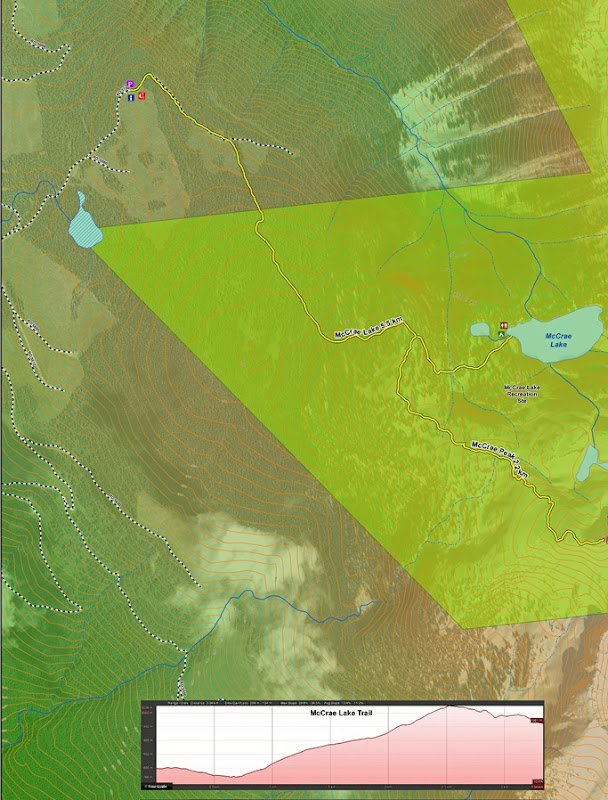 I am not sure where this map gets the 5.5 km for the trail because it was 3.5 km each way. The elevation gain is about 250 m from the trailhead to the highest point but you also go down a total of 130 m with some near the start and the rest near the end as we descended steeply down to the lake. It was also a very hot day, even up here, with no wind and the trail was quite exposed.

We were pretty wiped out at the end.

The first section was an old dirt road, which unfortunately descended for about 1 km. More smoky mountains in the distance, with some snow on top. 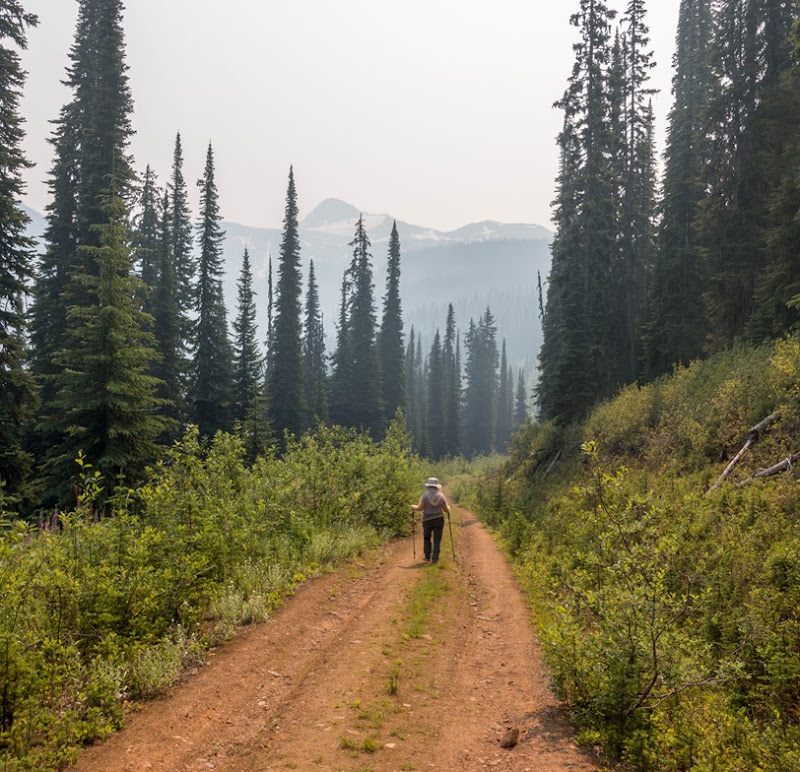 Not to get too negative but the bugs were pretty bad as well. Not too many mosquitoes but lots of the giant horseflies and some tiny nipping ones. Jennie’s nets and the bug repellant kept them from biting but they were very annoying anytime we stopped. It was so bad that when we pulled up to the trailhead, so many swarmed the car that we almost didn’t do the hike. I was the Guinea Pig and sprayed on the Off before I stepped out of the car to see how well it would work.

After the road, we turned onto a single track trail that climbed steeply for a while through the trees.

Then the grade got more gentle as we cross many small meadows covered in flowers. 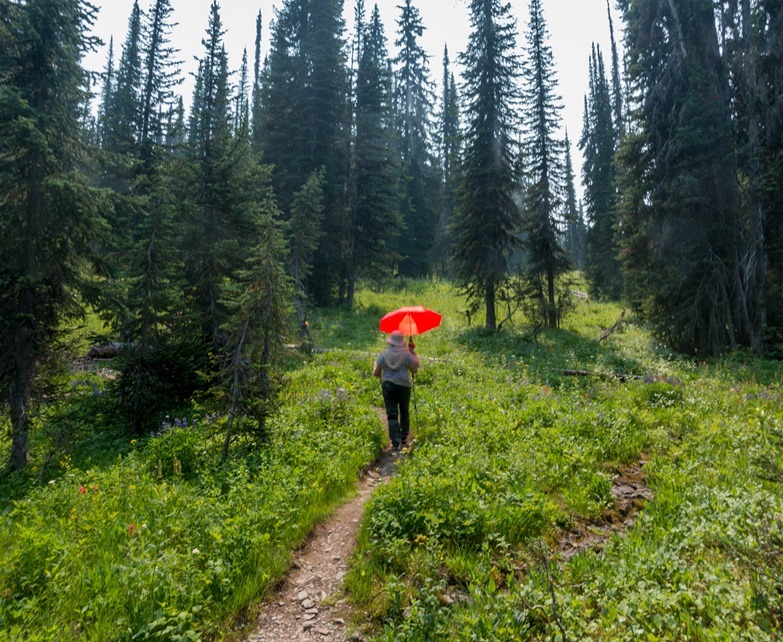 Jennie got out her sun umbrella as she was very hot in all the netting. It sure makes her easy to find in the pictures. 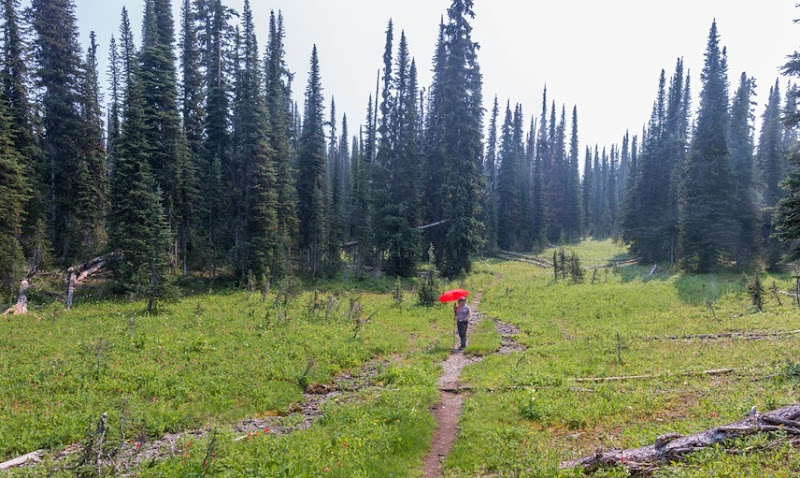 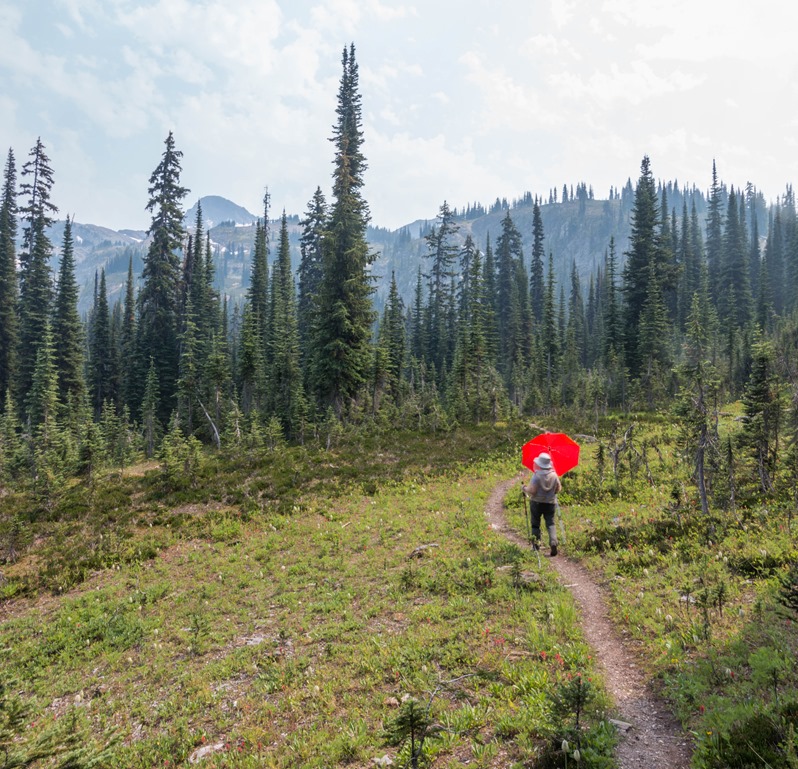 All of the trees are very tall and narrow with drooping branches because of the snow load. This very tall dead one was especially dense.

Then another steep climb to the ridge top. 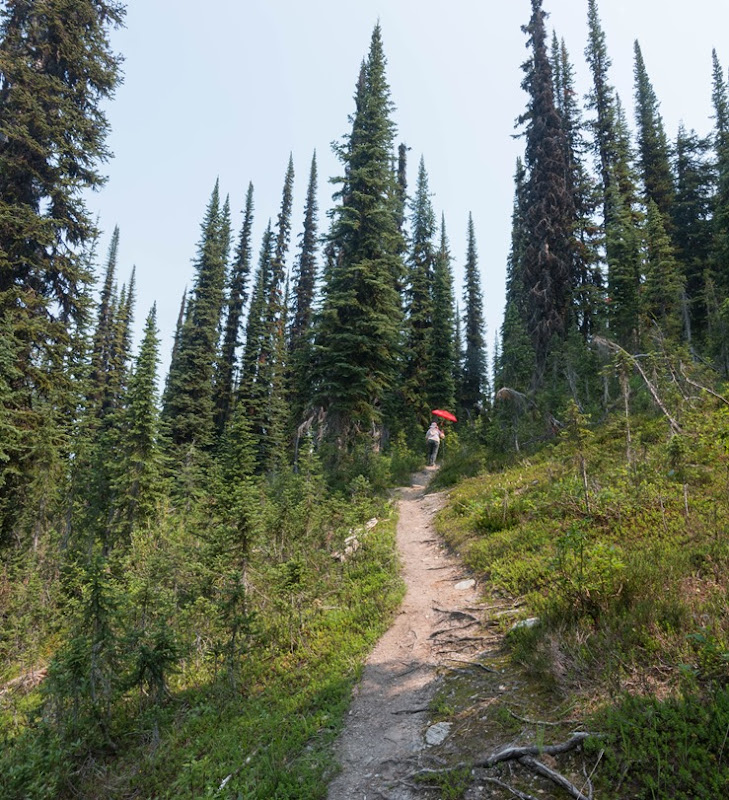 At the highest point of the trail there is a Y where you could either climb down to the lake or continue climbing up McCrae Mountain. There would be no views today up higher but we couldn’t have handled the elevation gain no matter what.

Down we go to the lake. 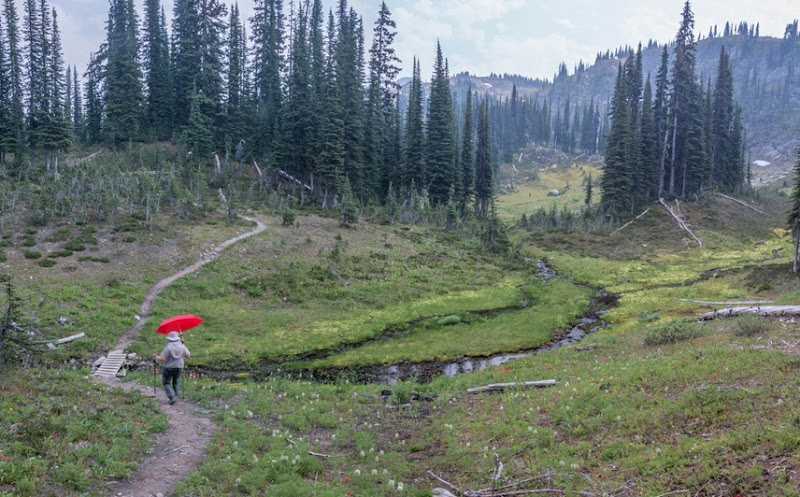 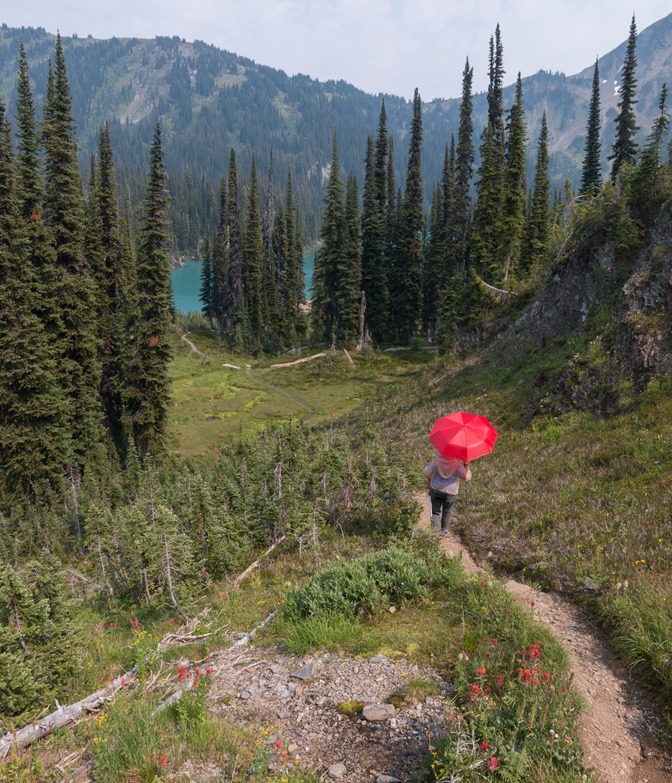 There are a couple of campsite (with wooden tent pads) and thankfully an outhouse.

We walked down to the end of the lake for a look toward the mountain at the far end. There was nowhere (that I felt like hiking to) to get a higher look down at the lake. 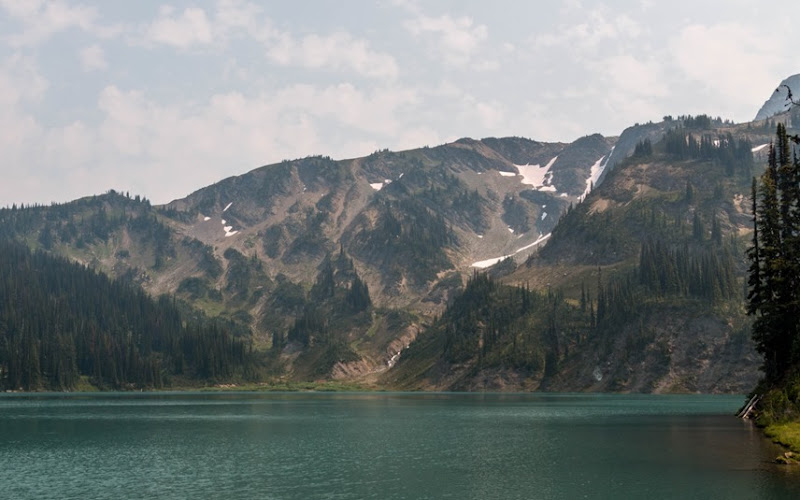 There was a trail around the lake edge that allowed you to go check out the stream and ribbon waterfall that fed the lake. 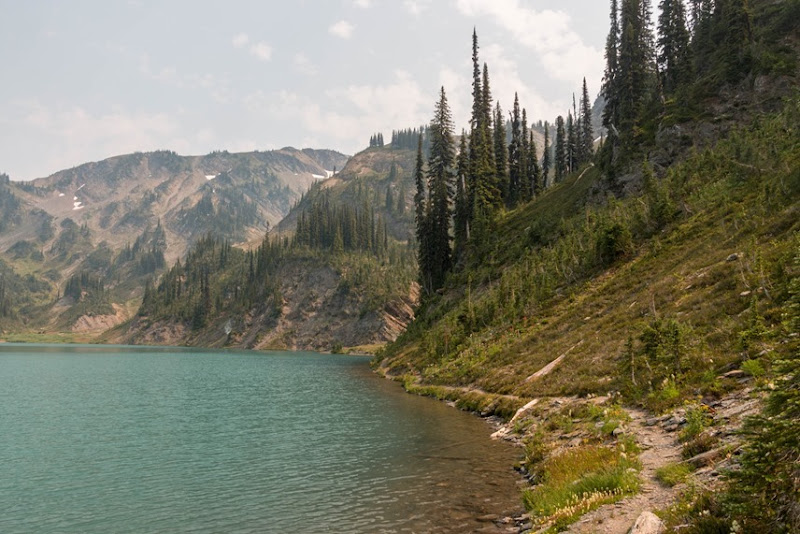 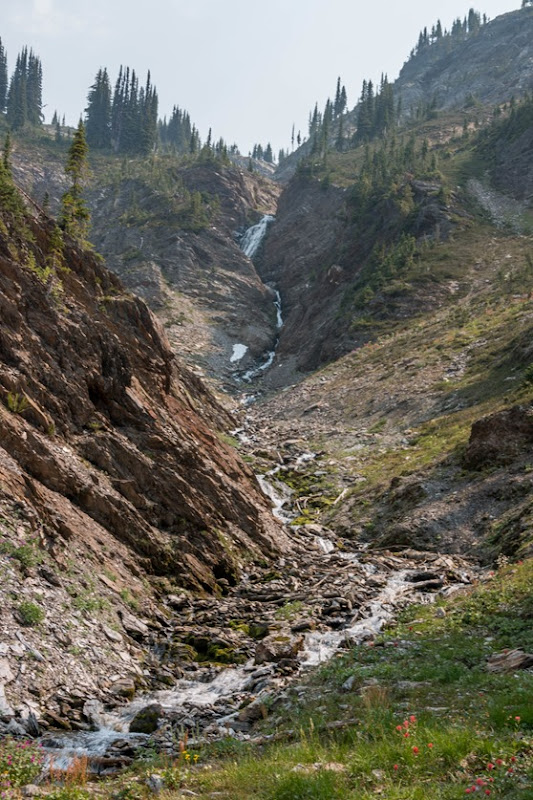 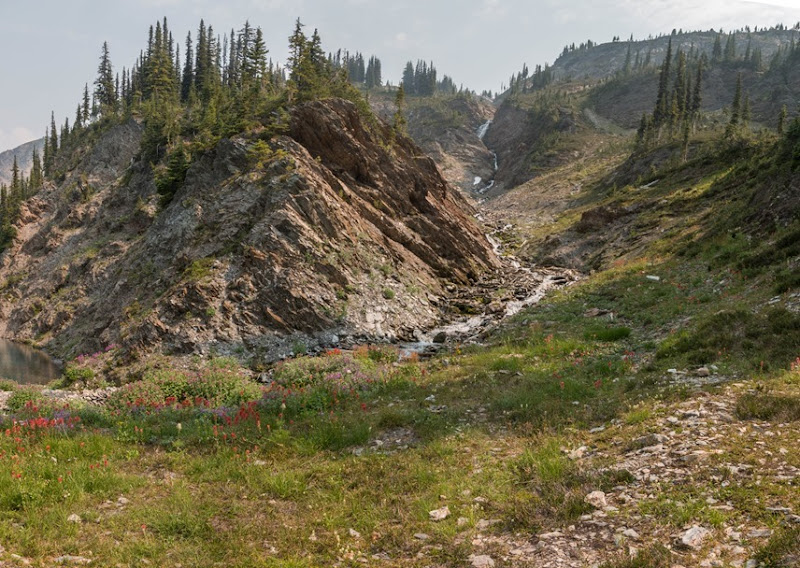 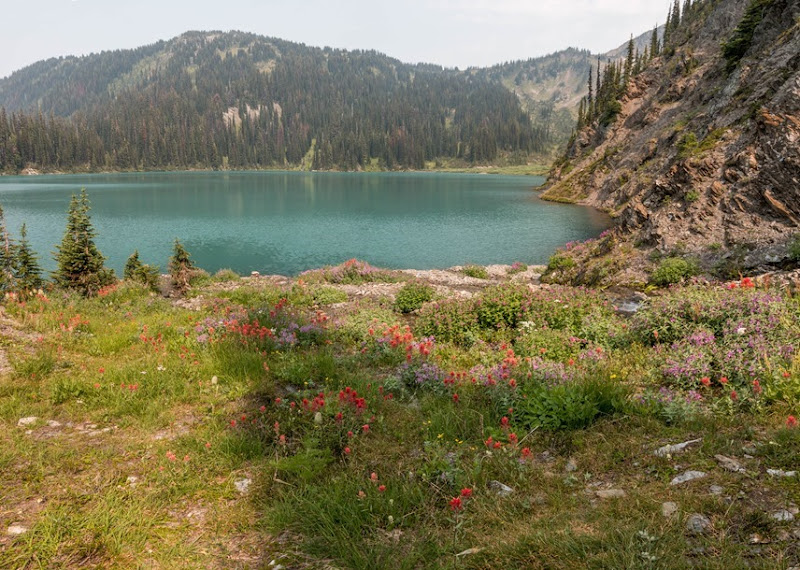 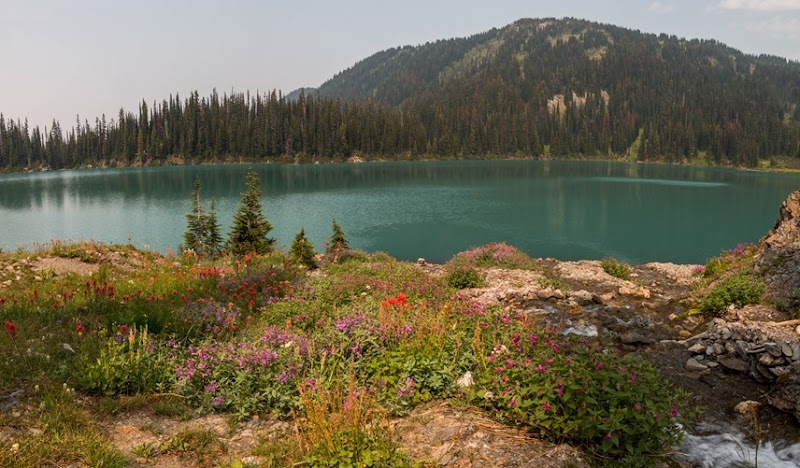 Since the drive had taken so long we had had our lunch in the car at the trailhead. Now we just had a good long rest and a snack before heading back.

The climb back up to the top of the trail was pretty disconcerting but once there, the rest of the trail (except the road section) was all downhill. 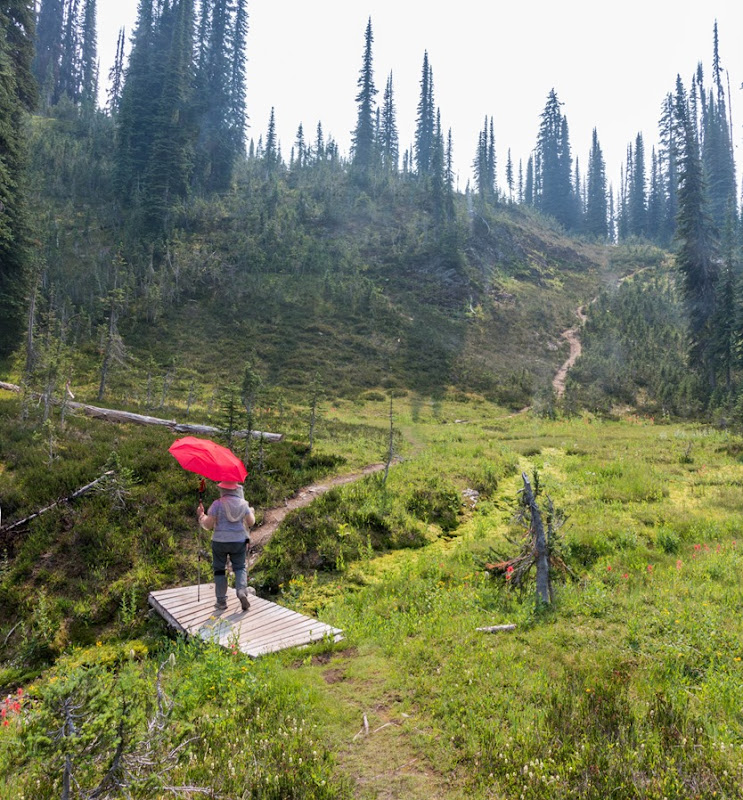 Back at the car and heading down the road, it was like we were in the clouds. There should have been a great view here. 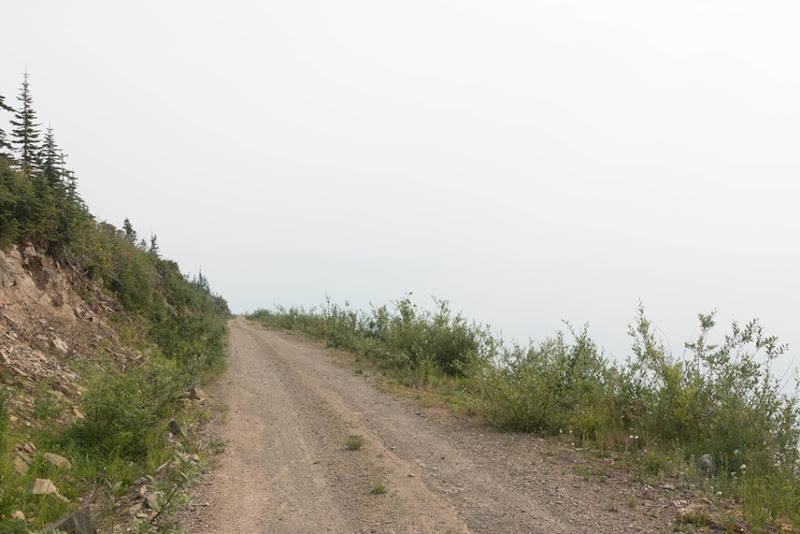 A bit lower and we could almost see the river.

As we passed the fire crew on the way down they told us that the road just ahead was blocked. I am sure that when they first saw us they wondered what the heck we were doing up here in conditions like this but they just asked if we had done the hike. 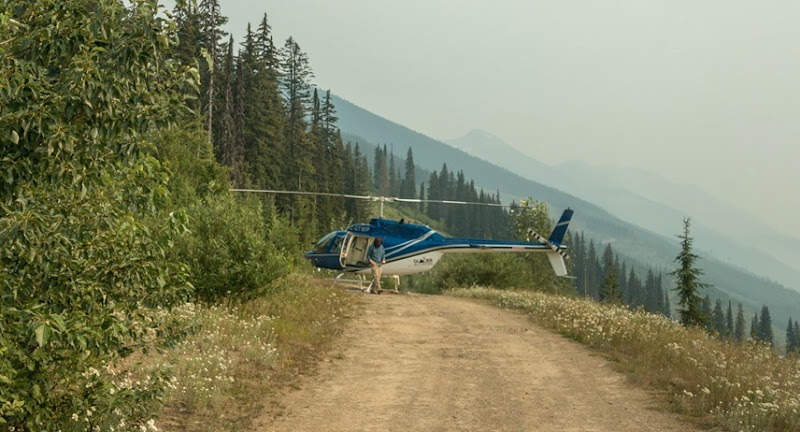 The bugs were so bad the pilot was wearing a head net. He had flown in the fire boss for the area, who was talking to the crew.

We waited about 15 minutes and then he came back. The pilot warned us to back up a bit as he could kick up some stones as he took off. 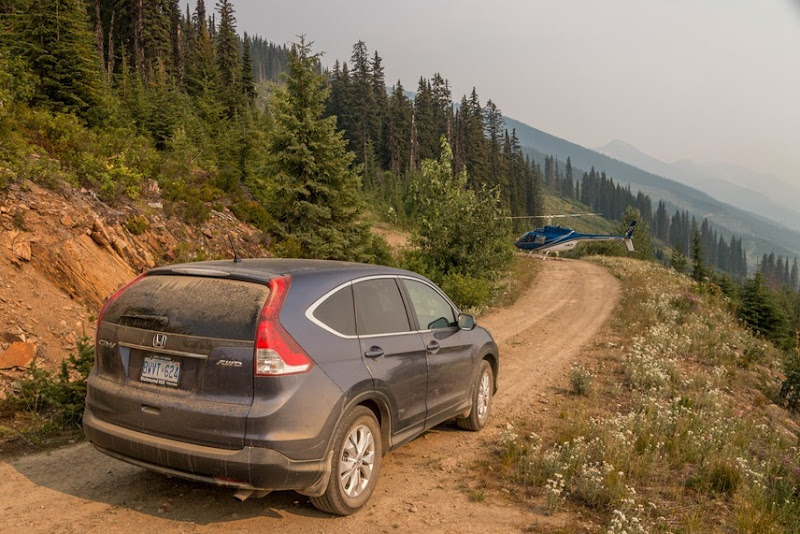 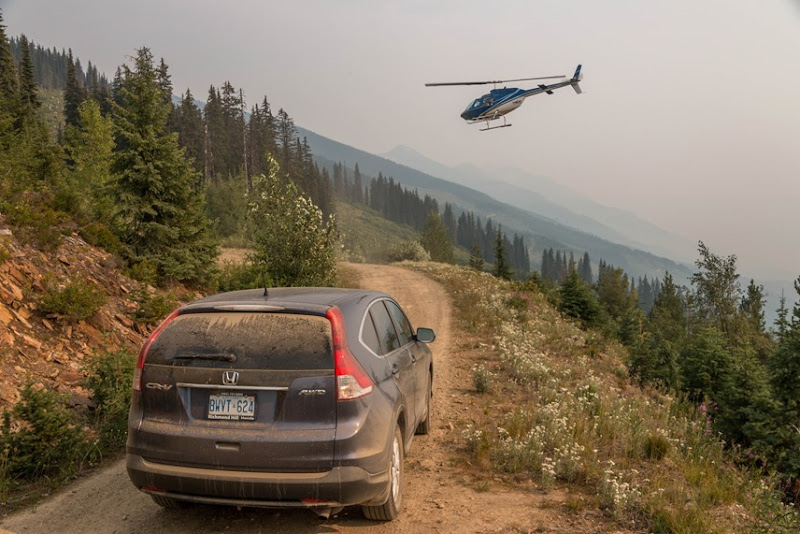 Farther down we could see the series of fires that we had suspected were there this morning. 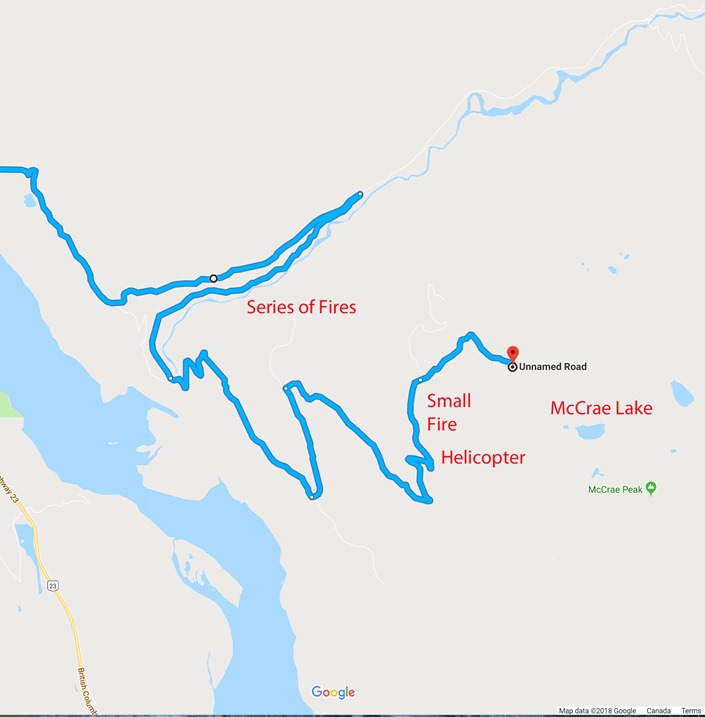 And eventually home with a very dirty car but still in one piece.

So in retrospect, normally this would have been a great hike but today was probably not the day to do it. We didn’t have much choice though. It is supposed to rain (hopefully) on the weekend and we are leaving on Monday.