We almost didn’t go to these falls. It was at least a half hour drive, the online pictures we unimpressive and it was under a 100 meters from the parking lot to the falls so it wouldn’t even be any exercise. I even thought that we would spend so little time there that I planned to have lunch on a hike to a viewpoint, later..

They turned out to be one of the most interesting and beautiful falls of the trip. We arrived just after 11 am and after we had done all our staring and scrambling around up and down the creek we left at around 2 pm. Needless to say I went back to the car and brought in our lunch.

Sicamous Creek Falls is just a short distance south of Sicamous, which is about 45 km east of us.

A short flat walk and then down some stairs to the falls. 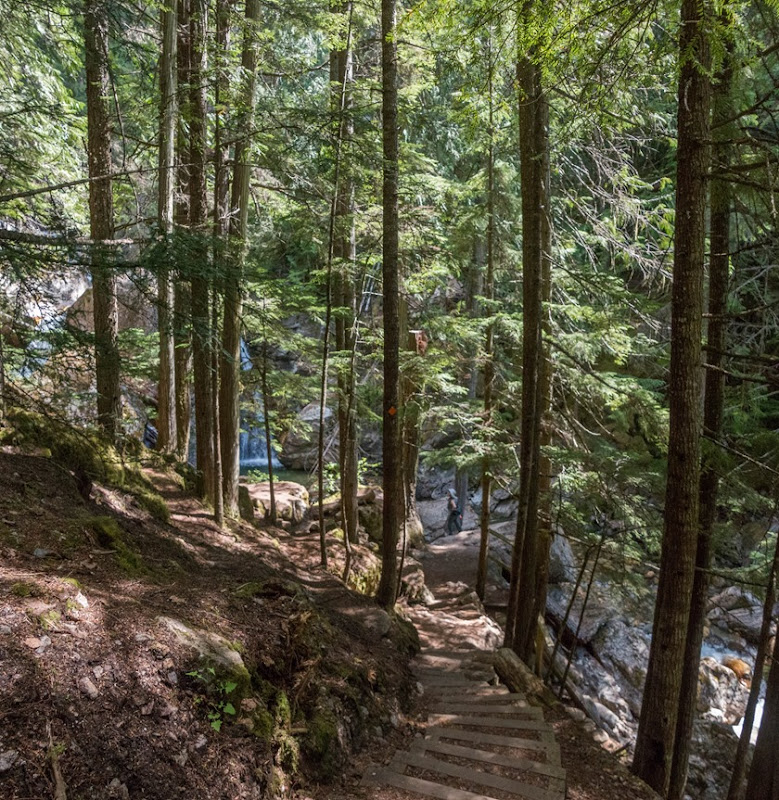 The falls were formed when three massive boulders blocked the creek. The pictures just don’t convey how large they are. I wish I could have put myself at the bottom of that rock but there was no way to get close. 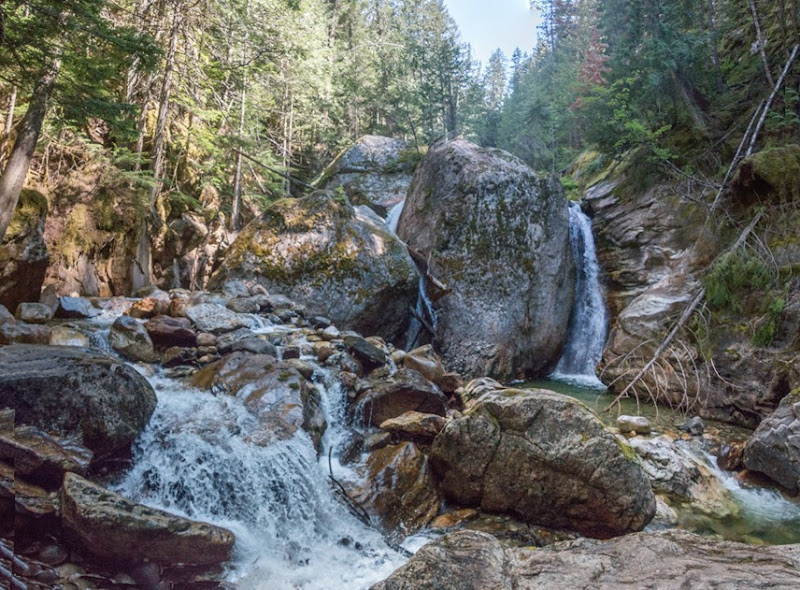 I would guess that the one on the right was at least 30-40 feet tall.

Here I am standing on top of the upper rock, later 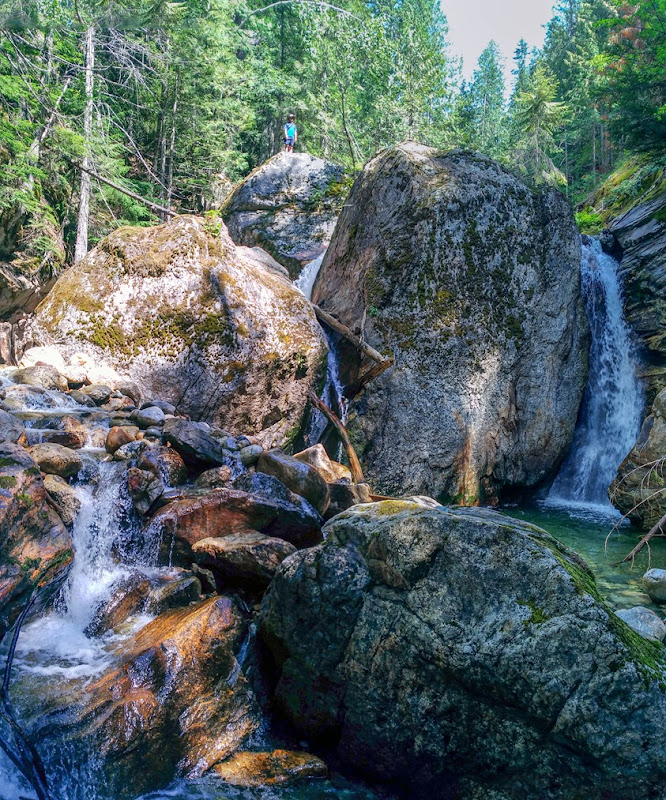 The photosphere also doesn’t really do it justice.

The were so many very colourful rocks with swirling patterns in them. This is looking downstream. 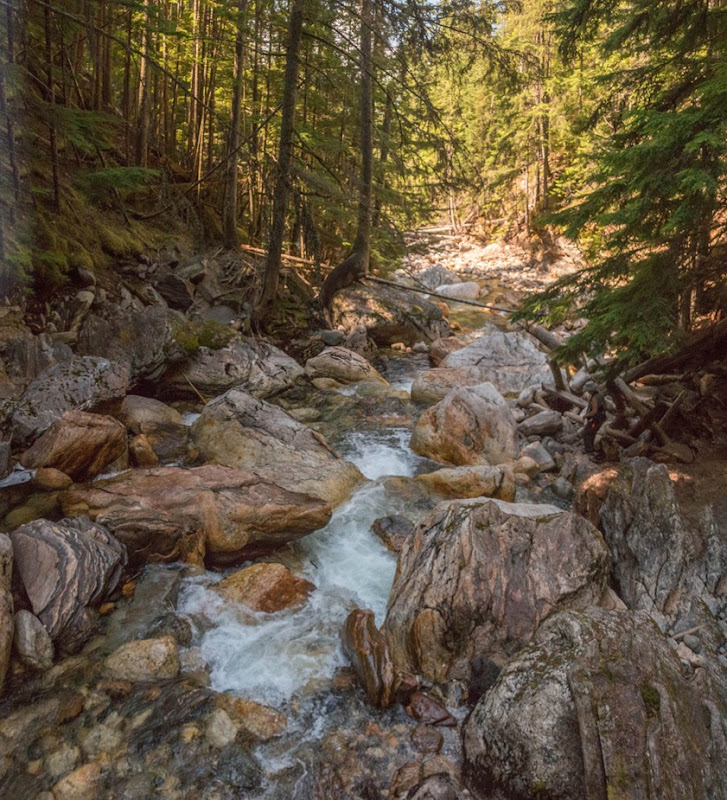 There was a trail to go downstream but it washed out several years ago. We worked our way along the creek bed.

Partway down looking back towards the falls. 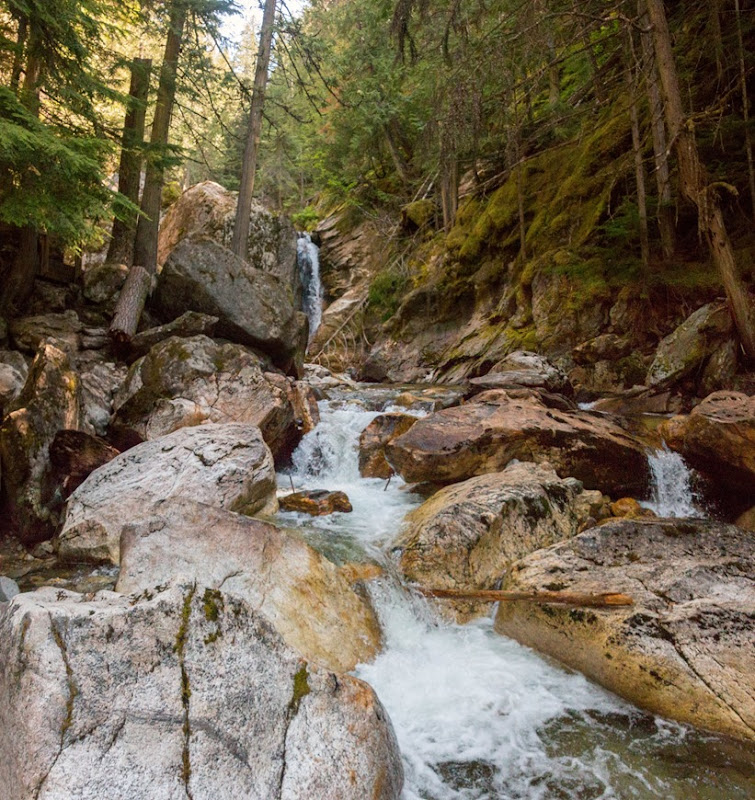 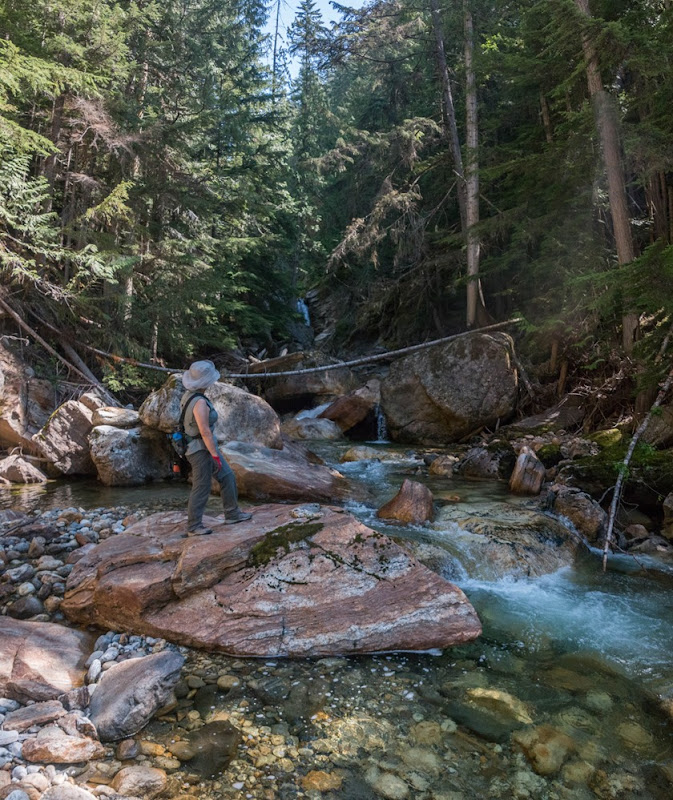 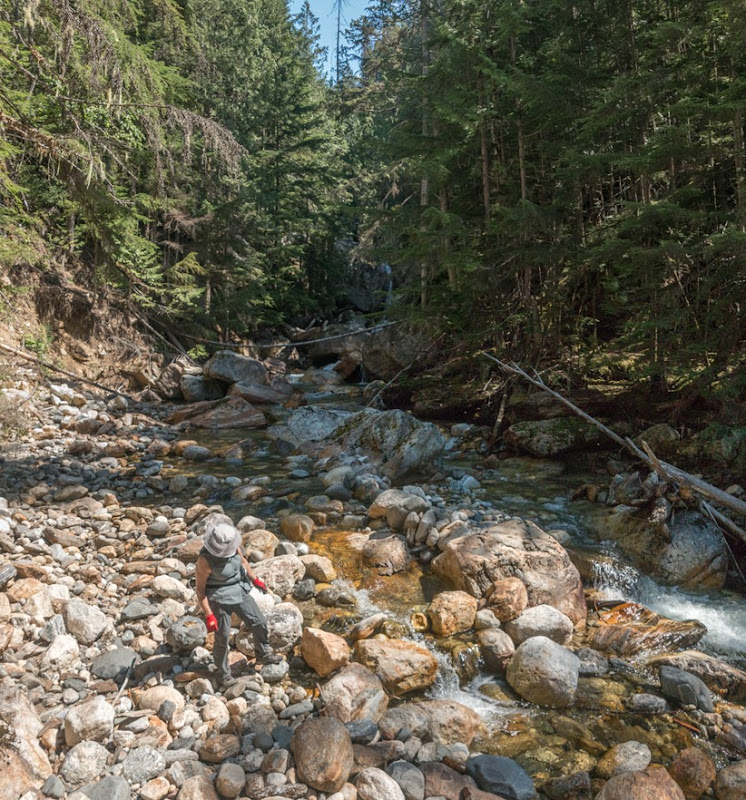 This rock was particularly colourful. 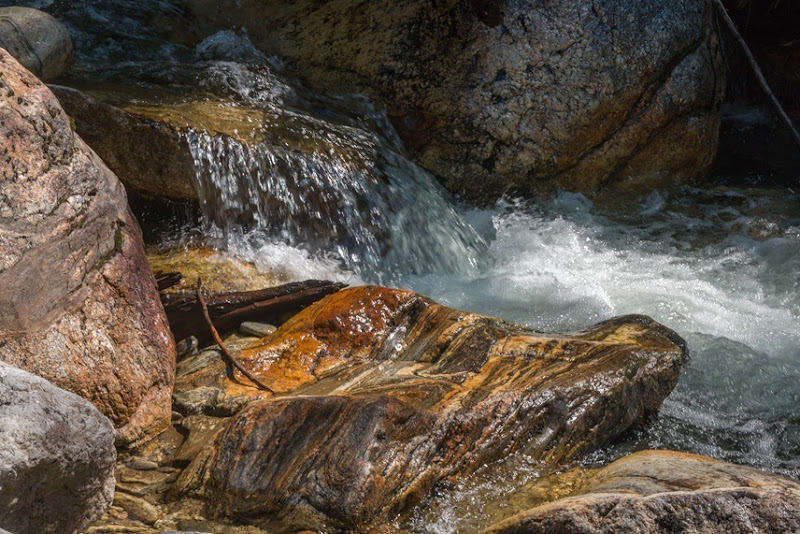 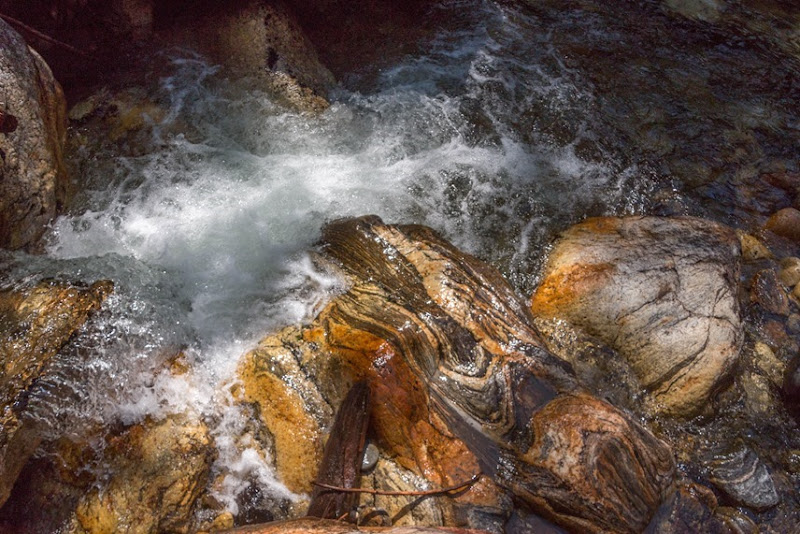 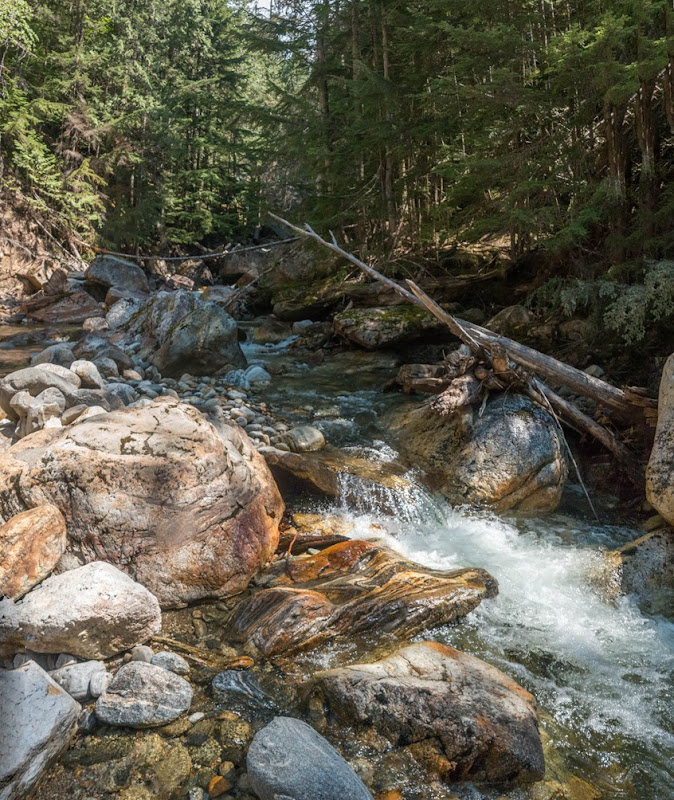 By now it was lunch time so after I got it from the car, we ate back by the waterfall. 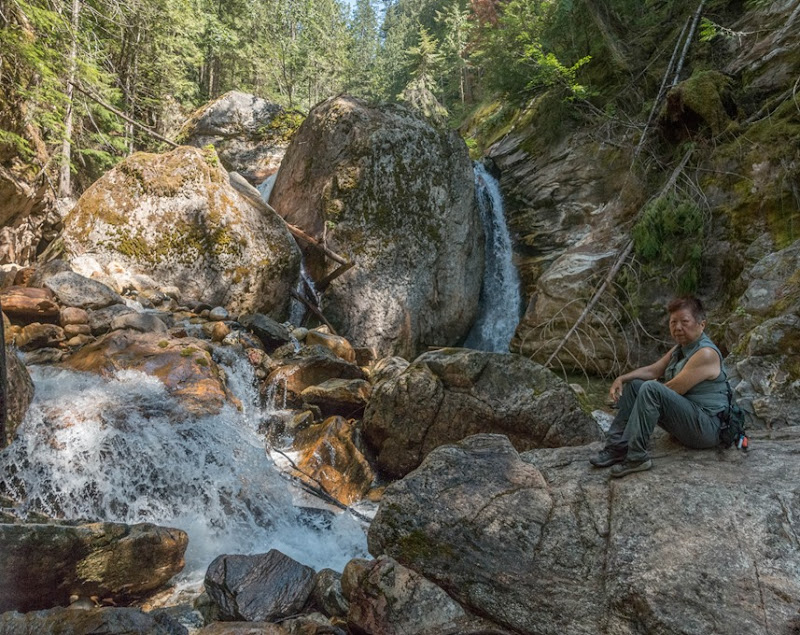 A side view, with Jennie sitting down on the lower right.

There was a very steep and narrow trail to the left that allowed you to climb up to the top of the rocks.

Partway up. The big rock we could see from below is in the center and the rock I stood on is to the left. 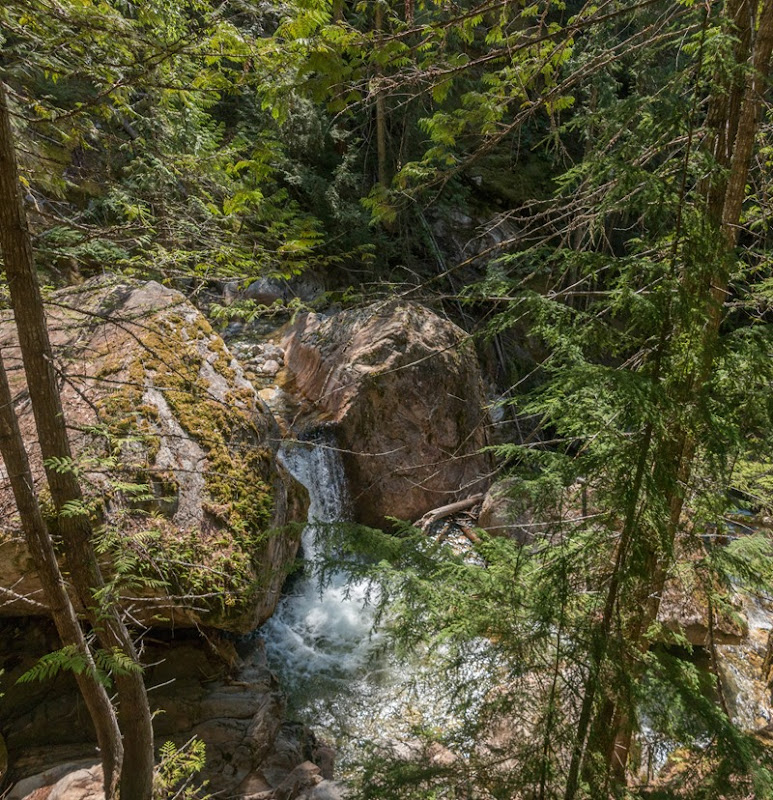 This shot is a weird panorama from the top of the rock, where I first point the camera directly down to the falls below me and them slowly bring it level. 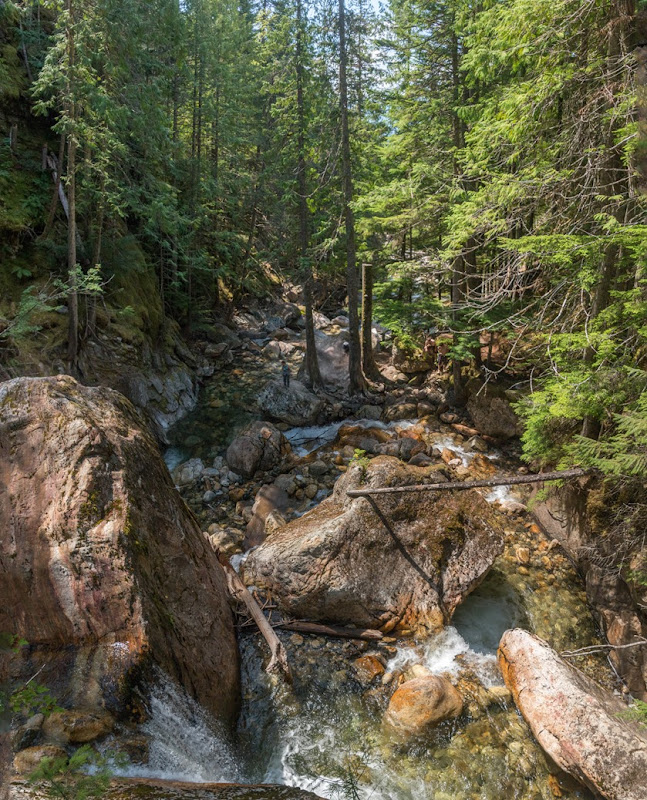 You can see Jennie standing on our lunch rock.

Looking upstream. I wish the whole thing could have been in the sun but looking at the trees around us I am not sure it would ever happen. 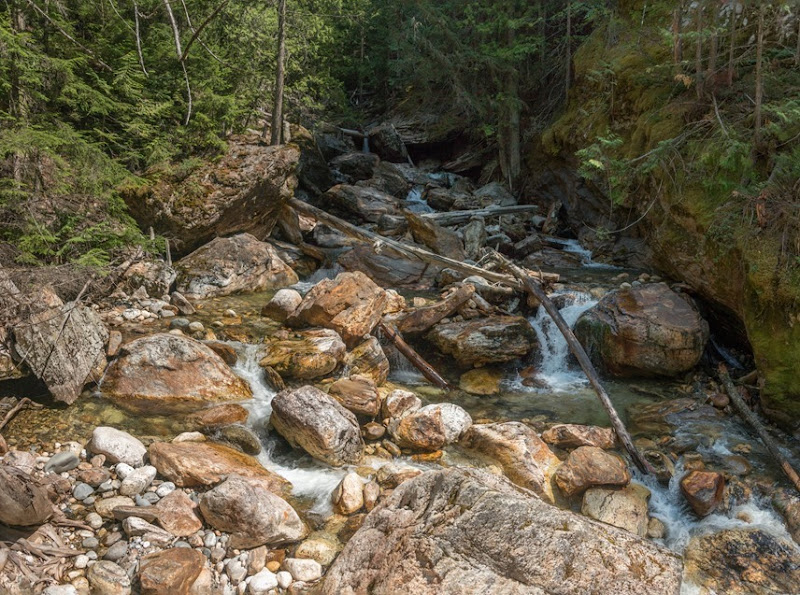 I thought that the view was so stunning that I went down and convinced Jennie to come up. It took a lot of courage because the trail was just a notch in a very steep hill with the large rocks at the bottom.

But it was worth it. 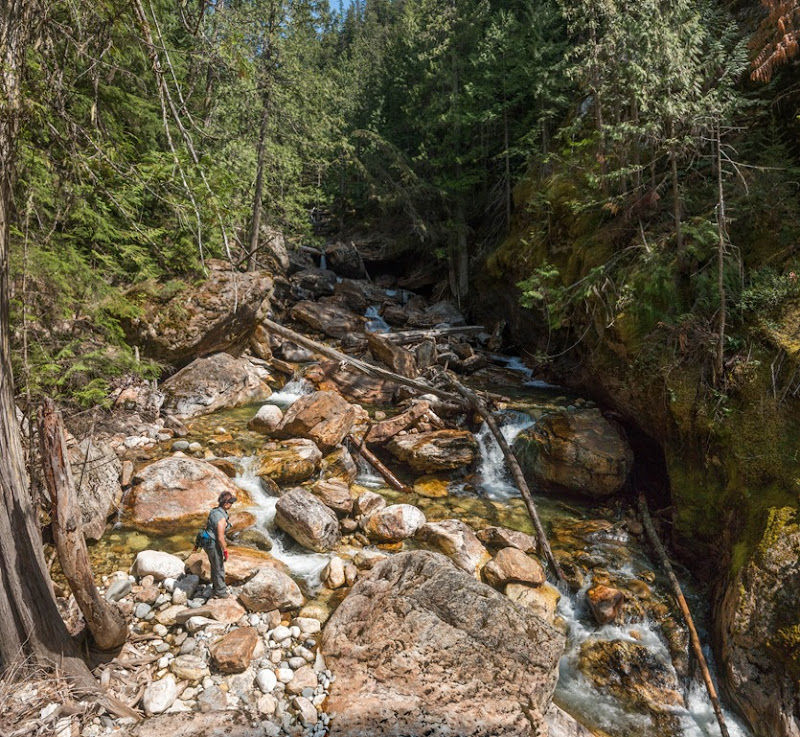 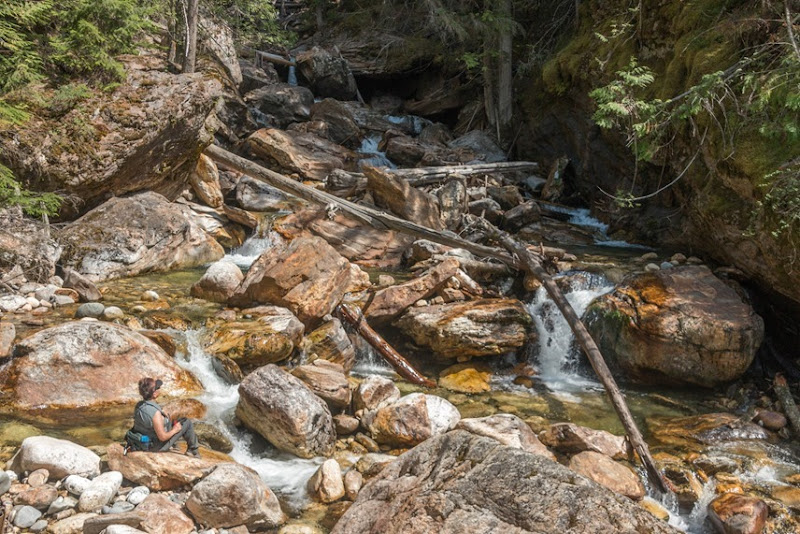 After a long stare we dragged ourselves away. It was actually quite cool down in the canyon. Returning to the car, we were back to being broiled.

Again, the pictures just don’t cut it. If you are in the area it is simply a must see, especially since it is so easy.