Today we did a short hike to a lookout over Kaslo and then toured the paddle wheeler SS Moyie.

The wind has died down and is shifting to be from the west so the smoke is getting worse again. I knew that any hike to a viewpoint was chancy in these conditions so we just did a very short one close to town. If it didn’t work out we at least got some exercise. 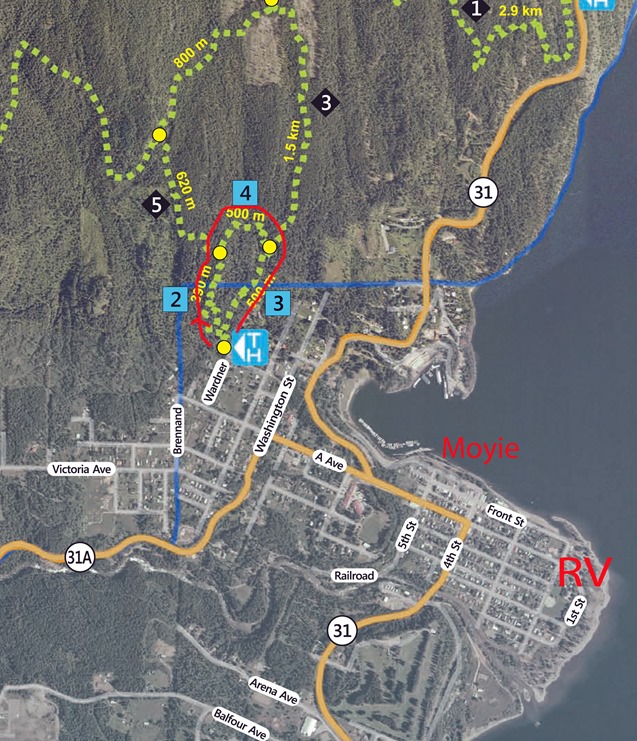 The Kaslo Lookout Trail loop is just under 1.5 km. In the first 350 m you climb about 100 m in moderate but constant switchbacks to the lookout. Continuing on you climb a bit higher but from then on it is all downhill to complete the loop.

On the way up we were mostly in wide open pine forest but there were a few overgrown spots. 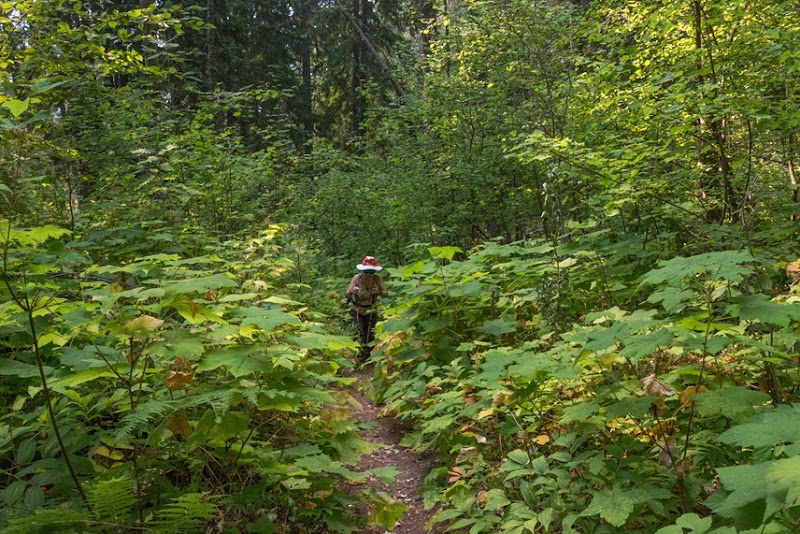 Considering how hazy our view upwards was from down below, the view was much better than we expected. At least we could see something. 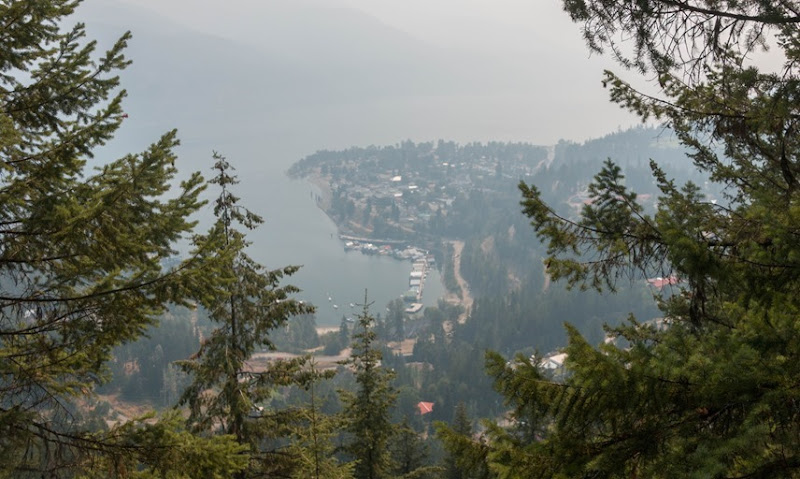 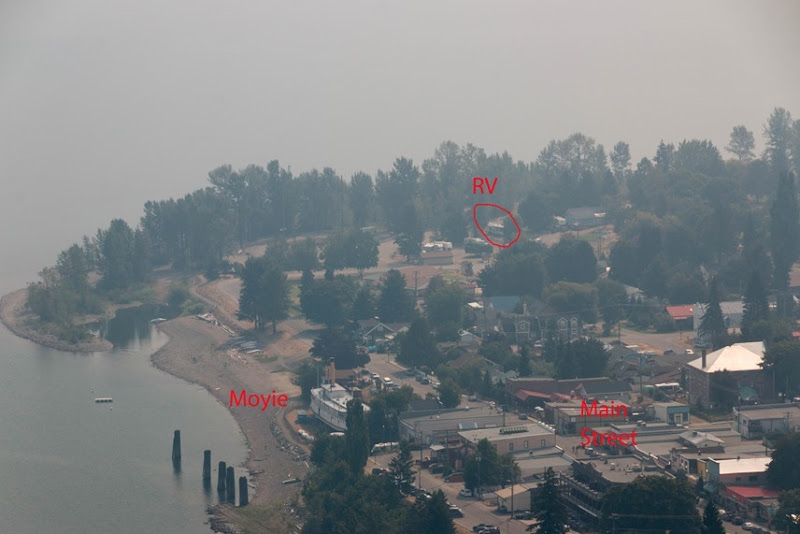 At every trail junction they displayed where you were on the map. 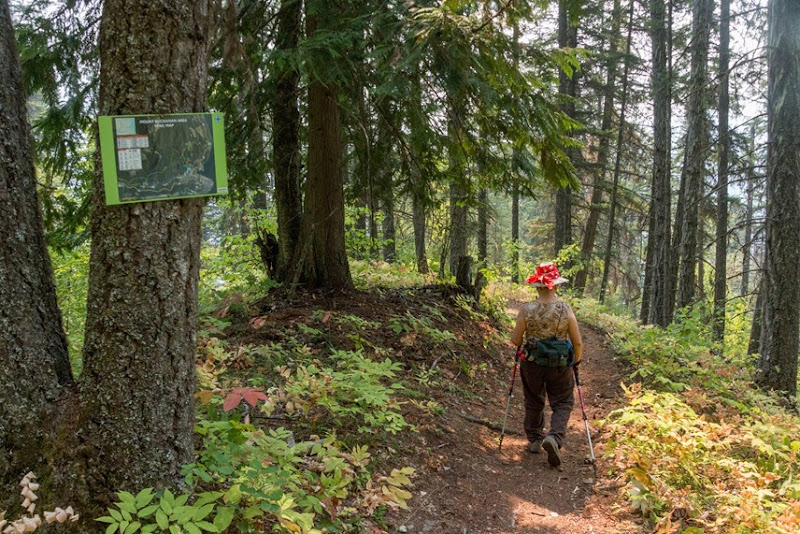 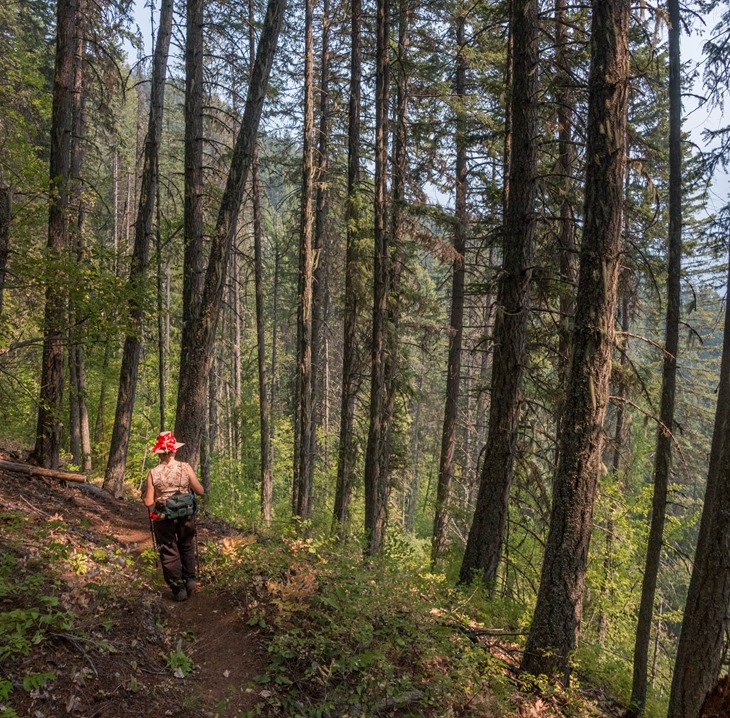 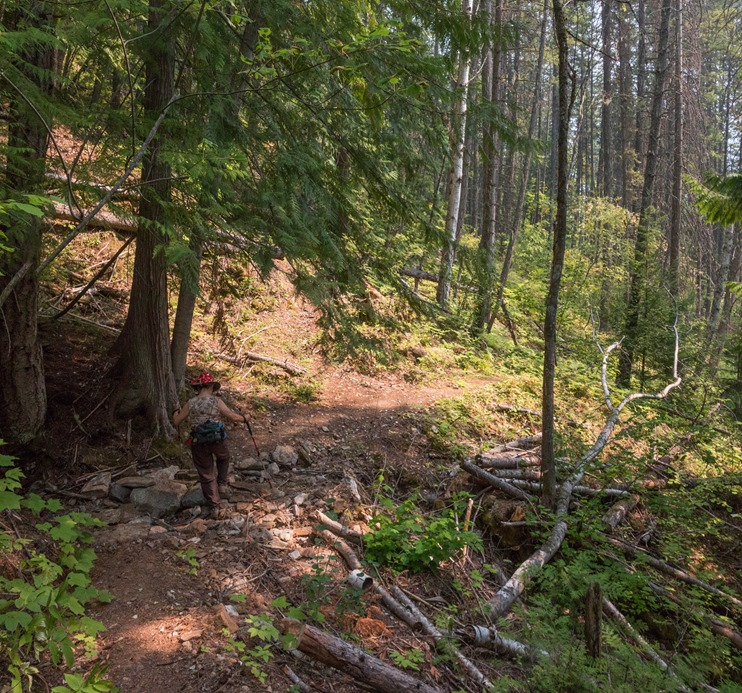 The bottom section of the trail is shared with the mountain bikers as evidenced by the wide turns. We never saw any though. 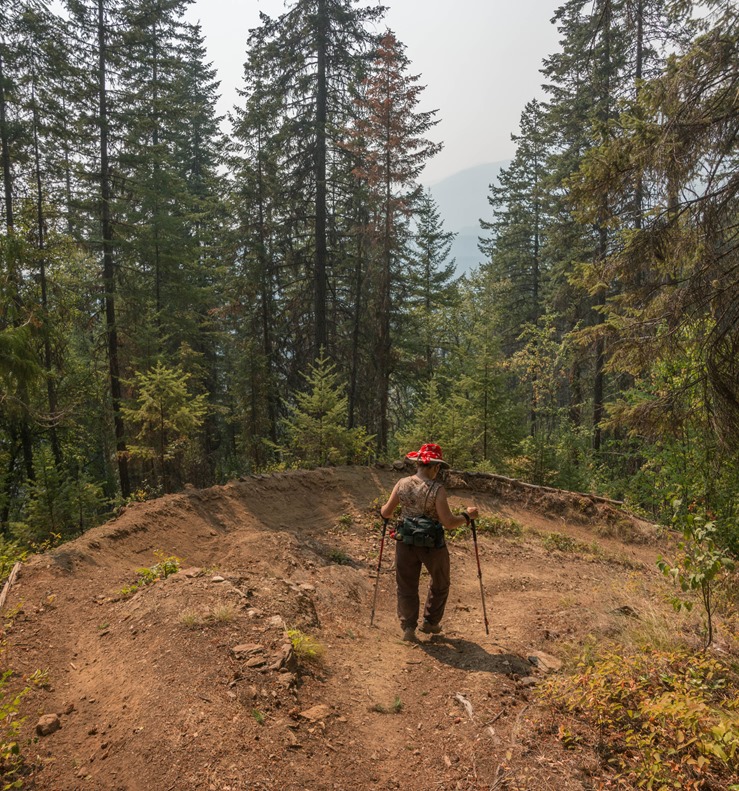 Then back to the RV for lunch. 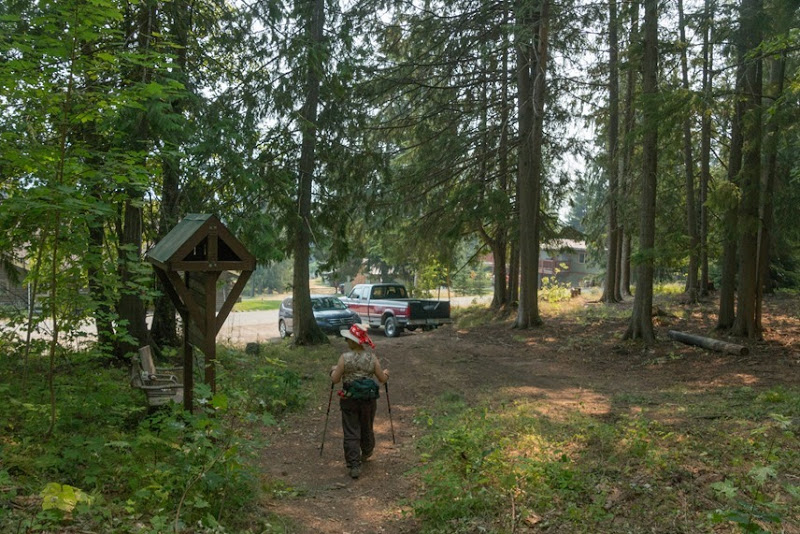 Who knows why this was here. 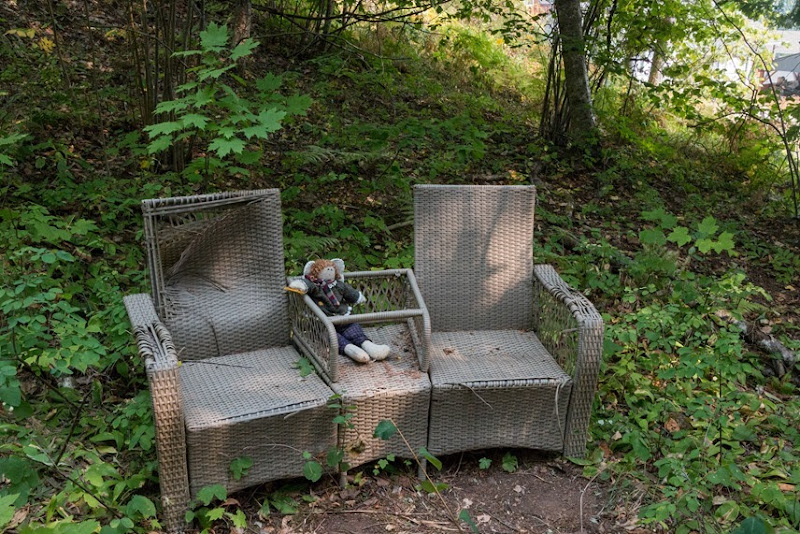 Later we walked into the village to tour the SS Moyie. It is the “oldest intact passenger-carrying sternwheel steamer in the world”.

Before there were roads or rail lines along or around the many large lakes in the interior of BC, these steamers were the only mode of transportation to places on the lakes. The Moyie started service in 1989, mainly ferrying rail passengers on Kootenay Lake between places that the rail system could not at that time connect. Later it was replaced by a larger ship and mainly pushed or pulled barges with the actual railcars between the ports.

When it was retired in 1957 the town bought it for $1 from Canadian Pacific. It is now up on shore right next to downtown. They have spent over a million dollars restoring it to its former glory. The steamers were quite luxurious inside.

The view from the street. 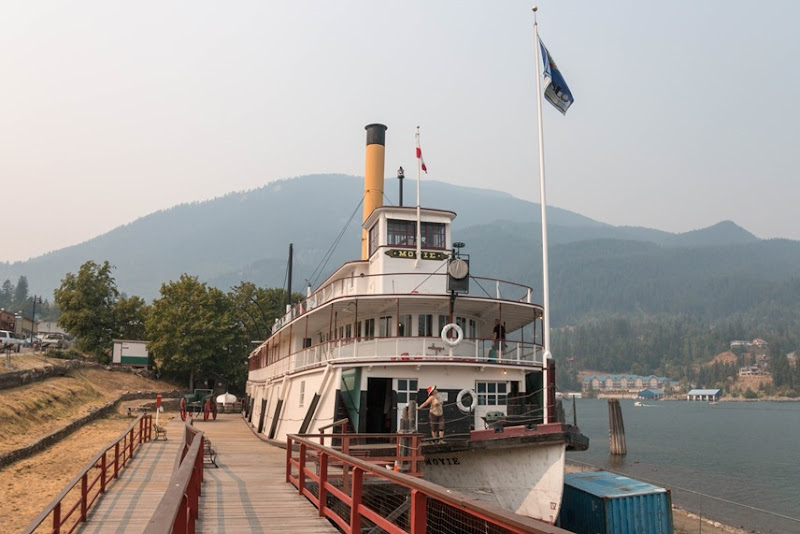 We did the lower deck first with the boiler at the front. 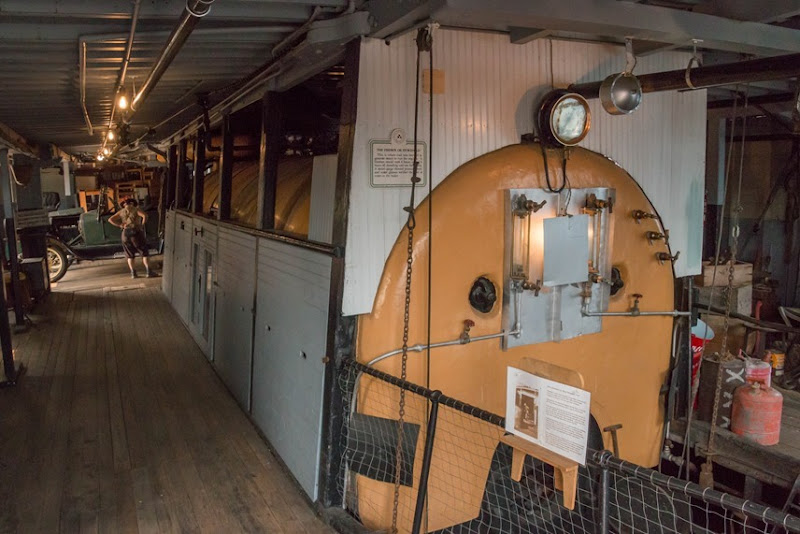 The middle was for cargo. 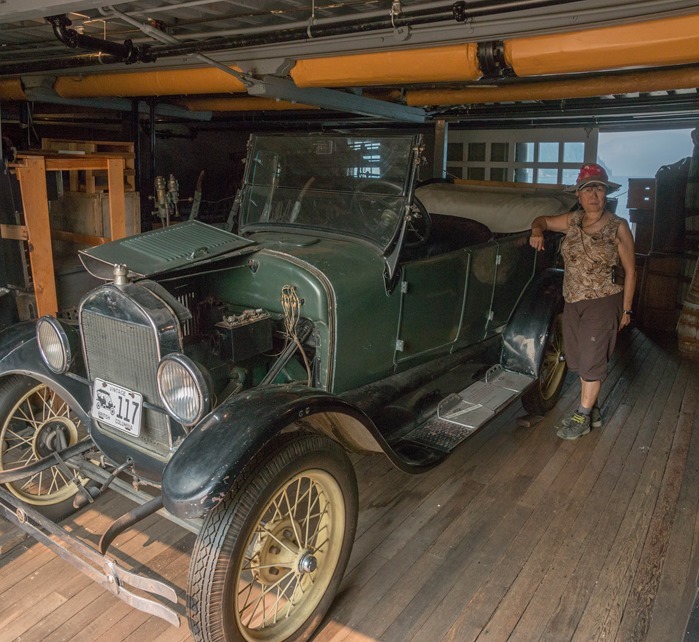 I don’t think they had a pressure washer (lower right). 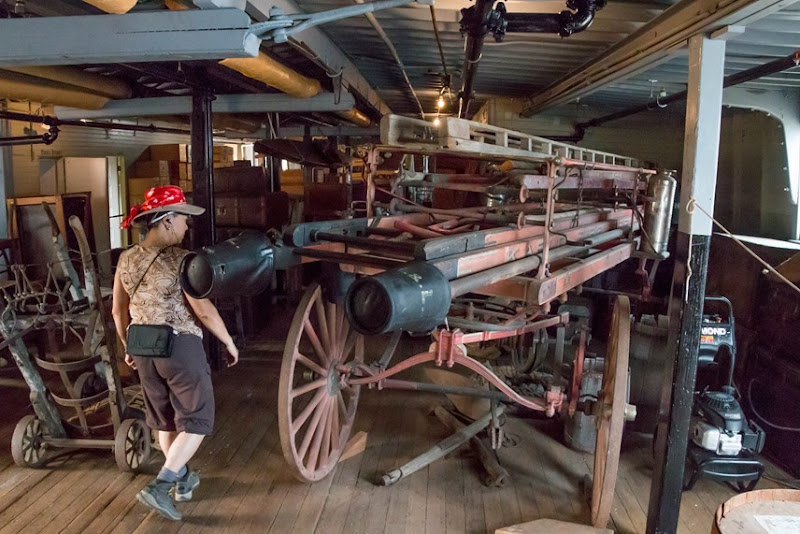 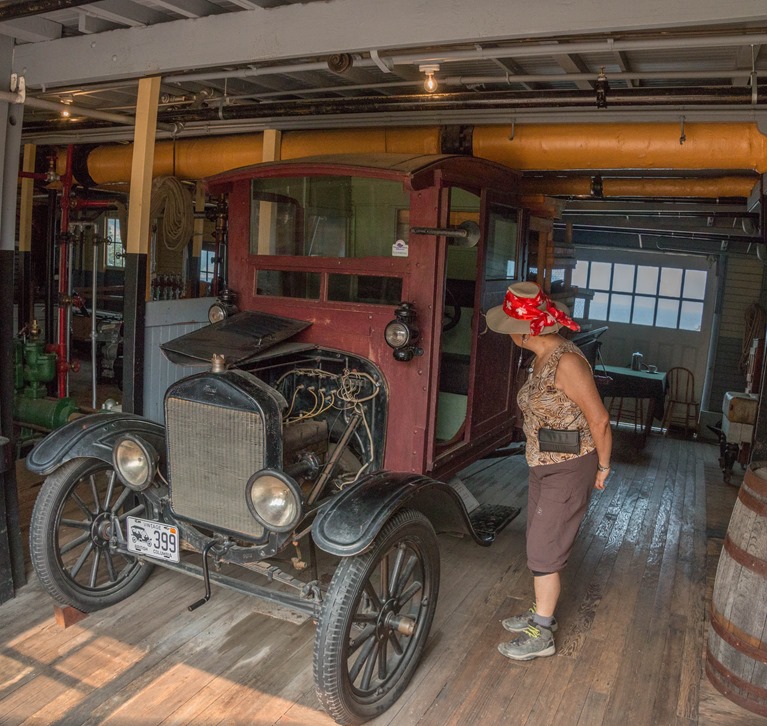 The steam engine at the rear. Lots of colourful pipes. 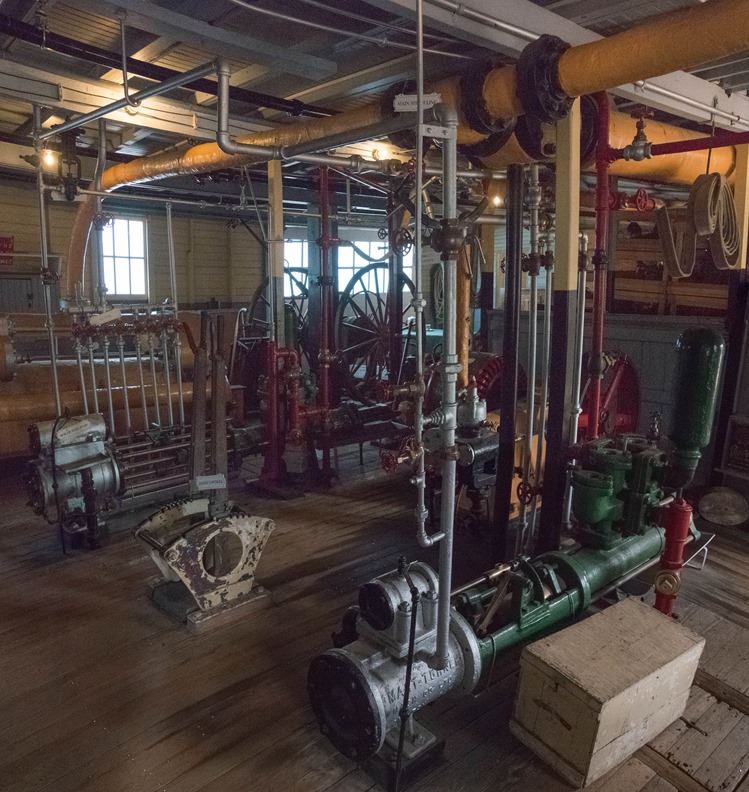 Outside and around back. 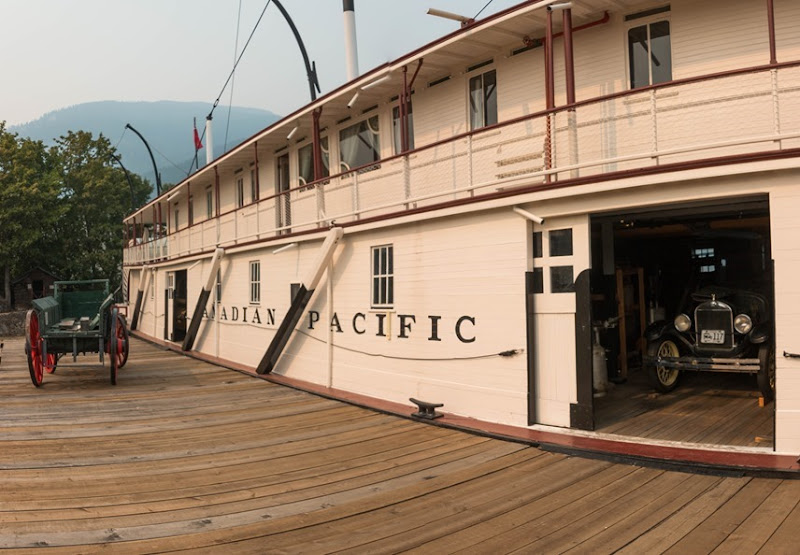 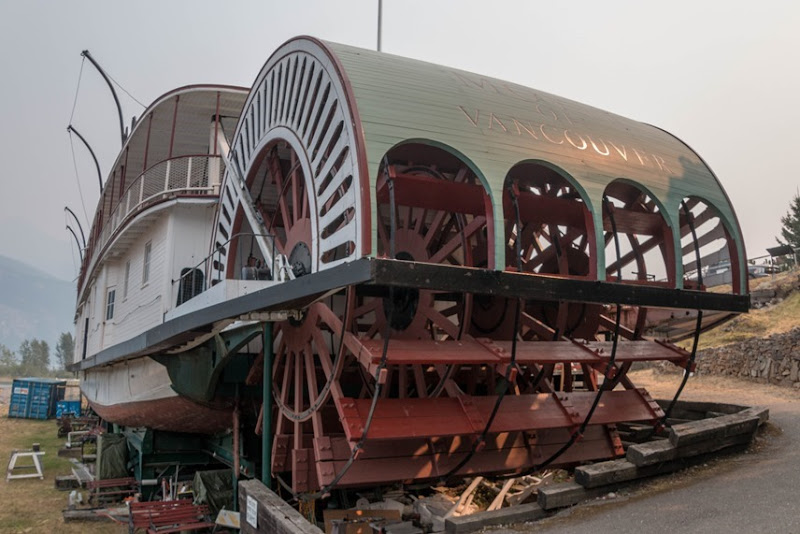 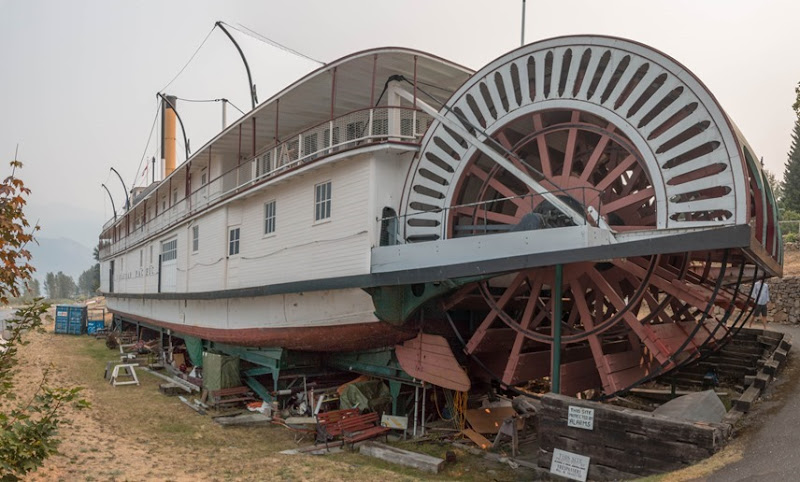 Then back inside to the main deck, at the front, for the men’s lounge.

The middle had the dinning area and some of the staterooms. 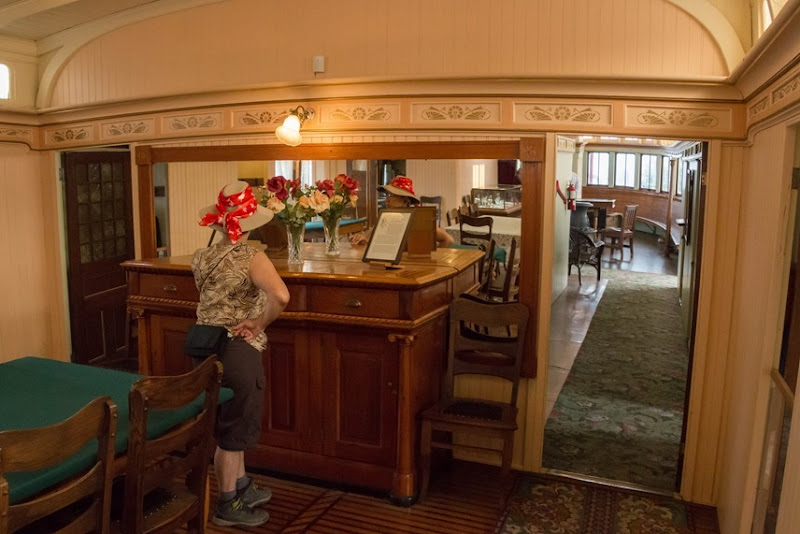 And the back had the lady’s lounge. 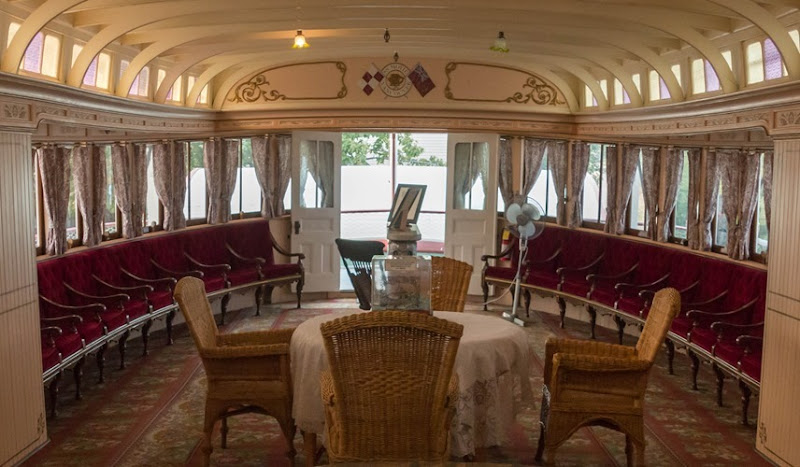 Finally up to the top deck for the wheelhouse. 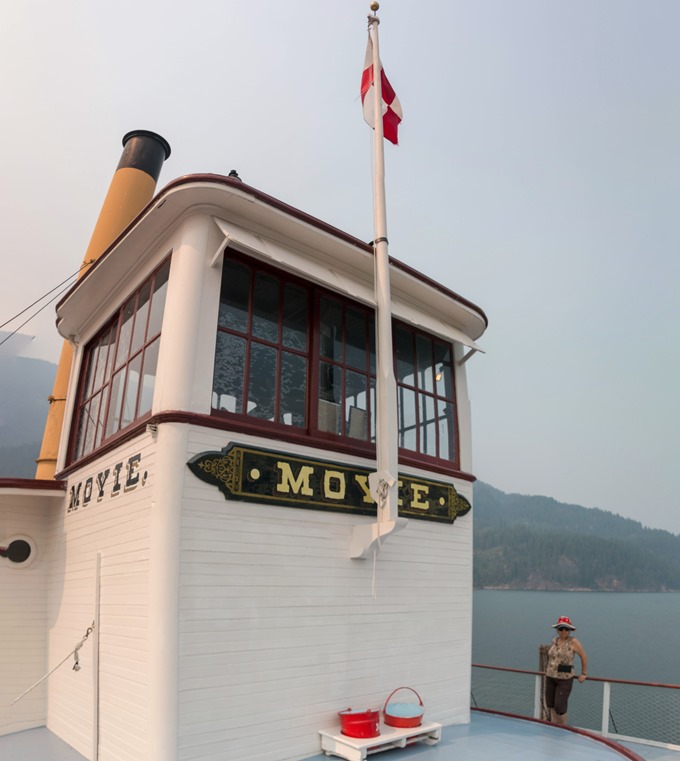 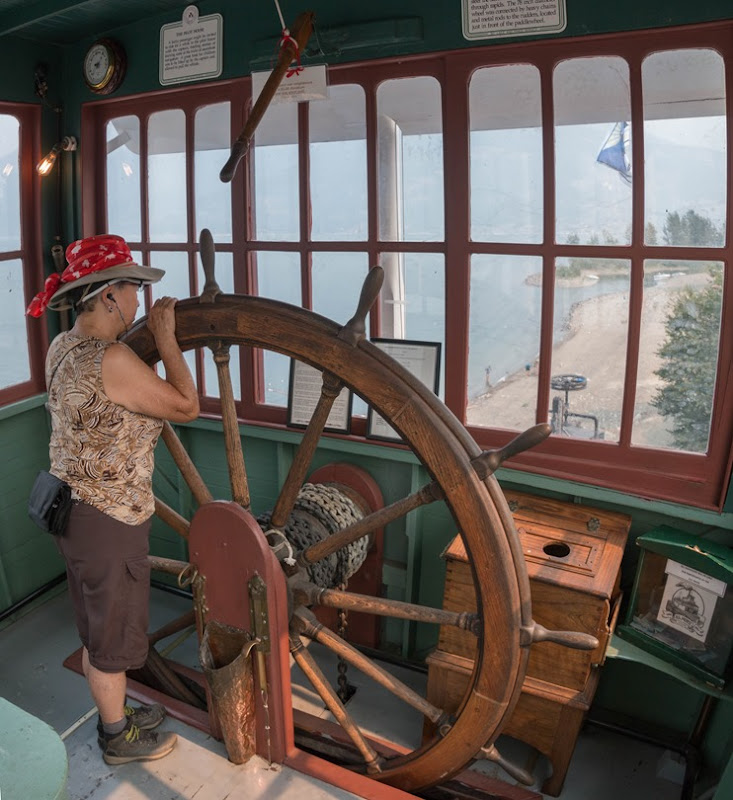 We had heard the whistle blowing at very odd times during the day. For a donation anyone can give a short blast. 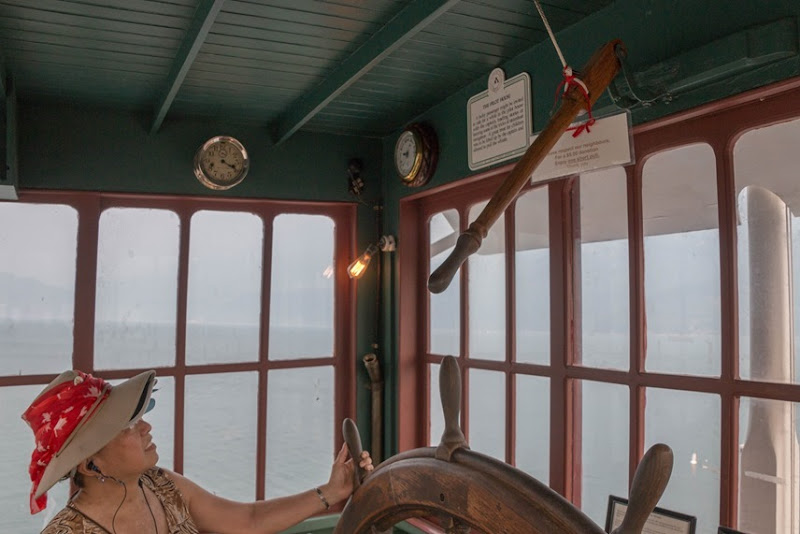 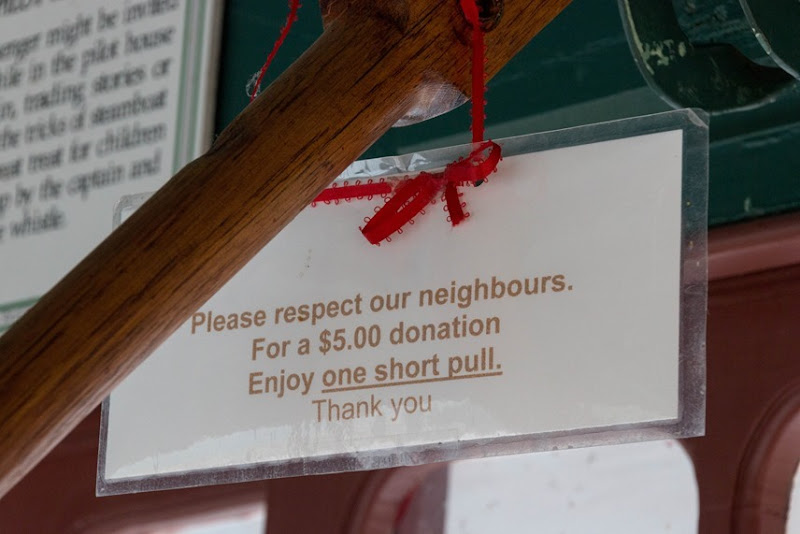 Then down to the visitor’s center to watch a movie about the Moyie and some pictures and history about it and its sister steamships.

Yesterday, in our walk along the waterfront, we had seen these railroad tracks going into the water. 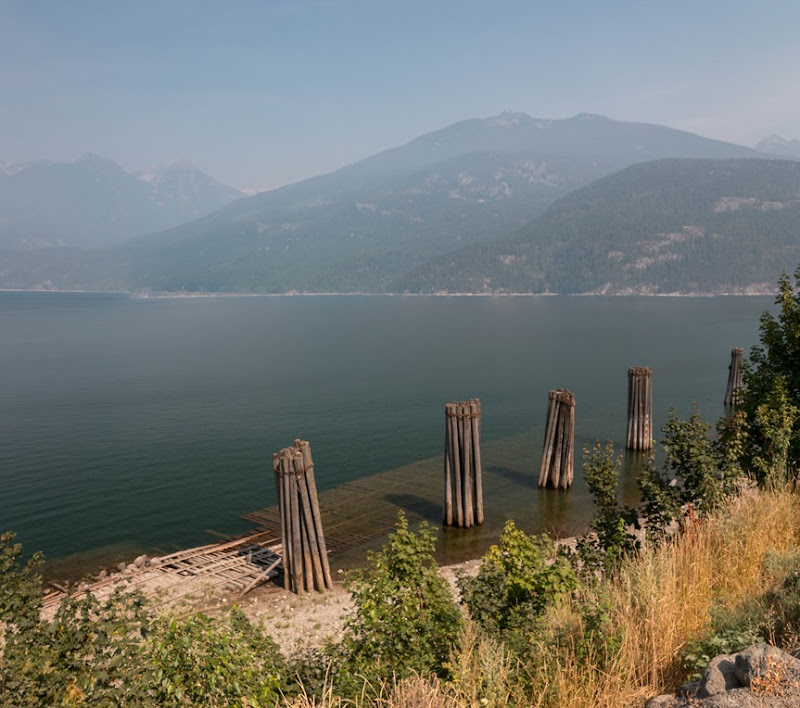 At first I thought they were used to pull the ship out of the water in the winter but they were actually used to put full trains on and off the barges so that they could be moved to the other sections of the rail lines. 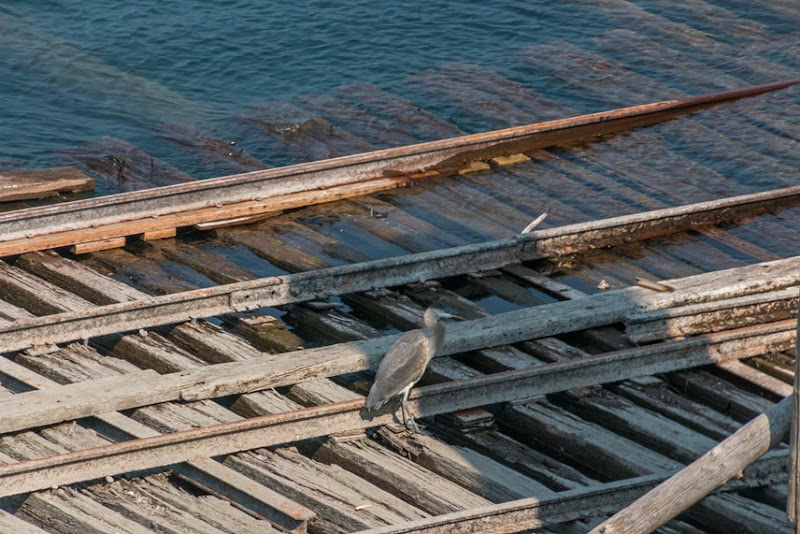