Today we headed up toward Kokanee Glacier Provincial Park. The entrance to the park is at the end of a 16 km dirt road that starts very near our campground. The Old Growth Trail is 11 km up the road. 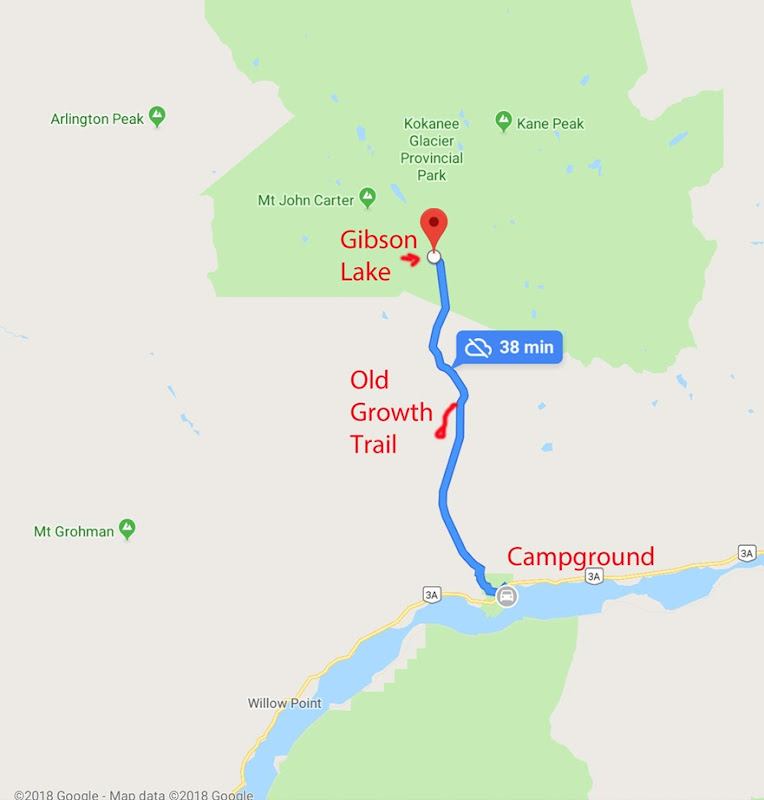 As the main way into a provincial park this road was pretty rough. Any car could do it but there was lots of loose gravel and washboards and near the park there were some large potholes to avoid.

The Old Growth trail is about 3 km long and goes down about 100 m in elevation as you follow Kokanee Creek through a grove of very large cedar, spruce and hemlock trees. 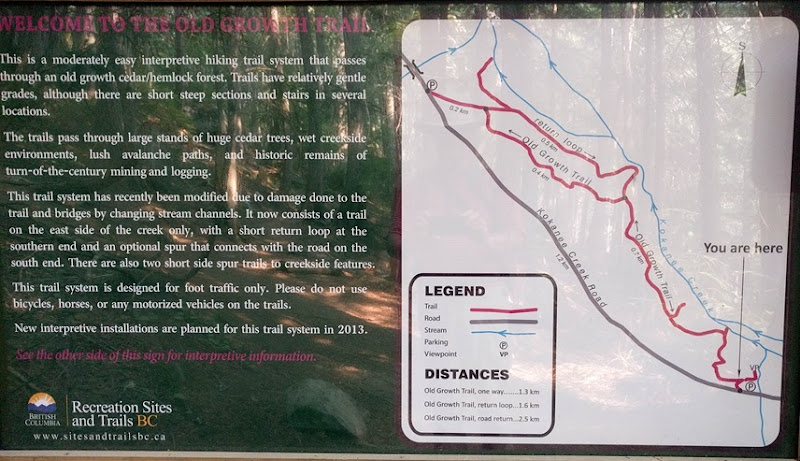 South is up on this map. We made it down to that extension of the loop the goes to the creek and had lunch before returning.

Most of the elevation change is in the first few hundred meters as you climb down from the road to the creek. It was a long climb back up. You can see some people below us near the center of the picture below. 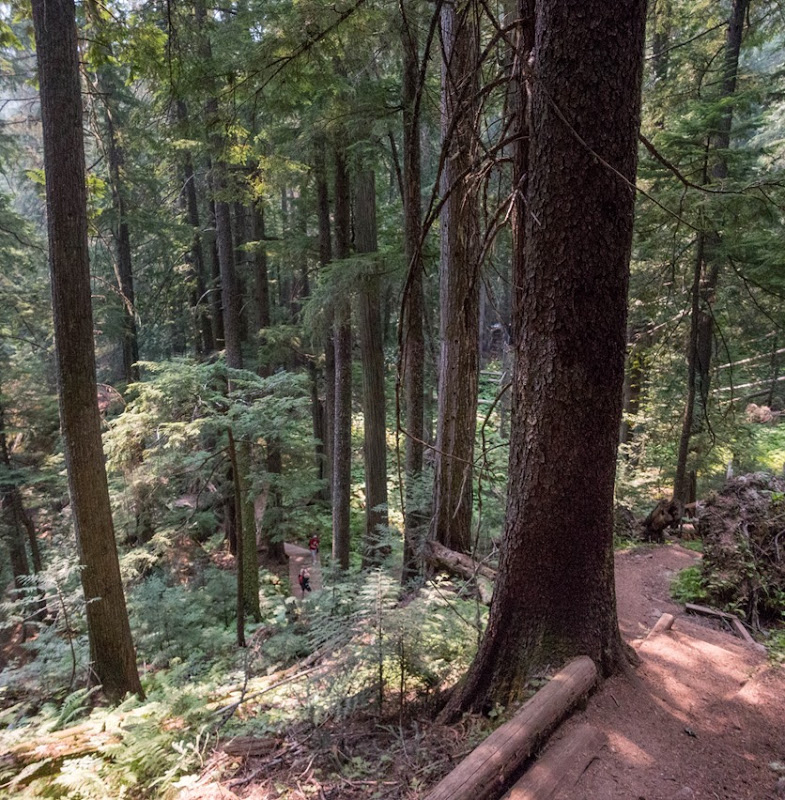 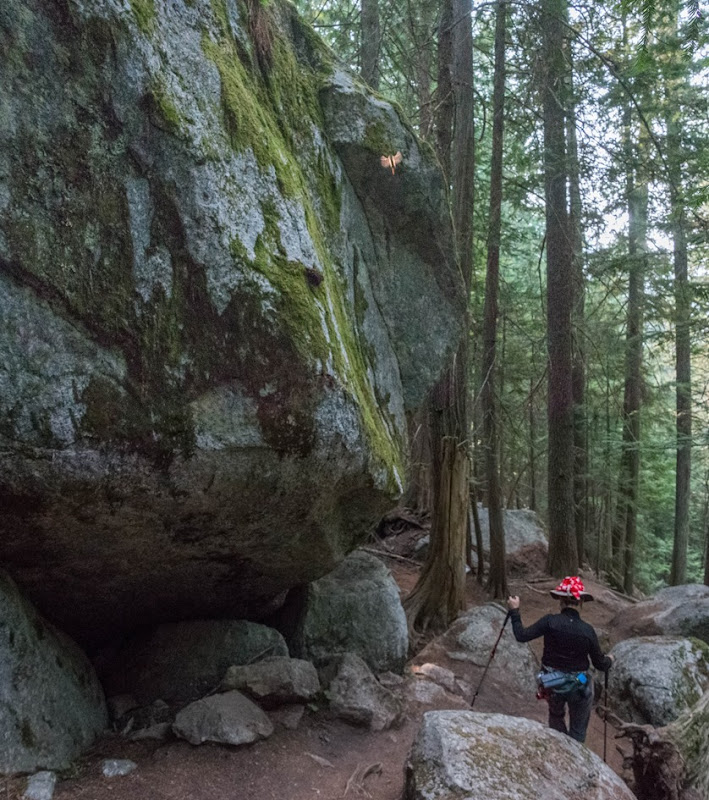 Just as you get to the creek you come to this massive glacier boulder that has been split in two by the freeze thaw cycle. You can walk through the crack to get to the creek. Look for tiny Jennie below. 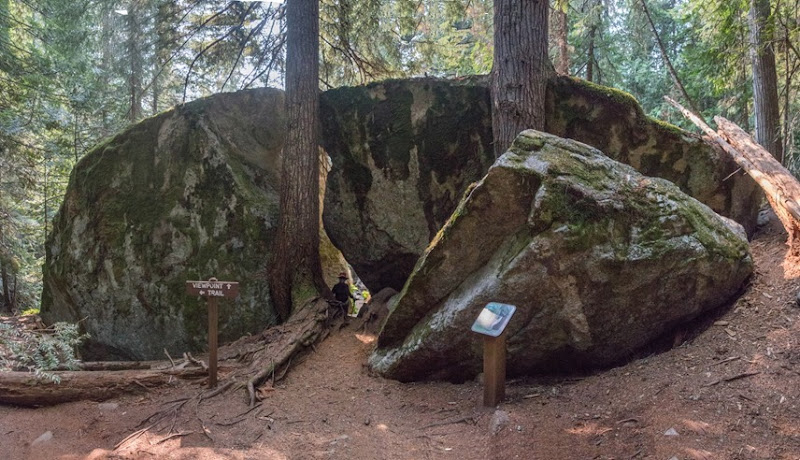 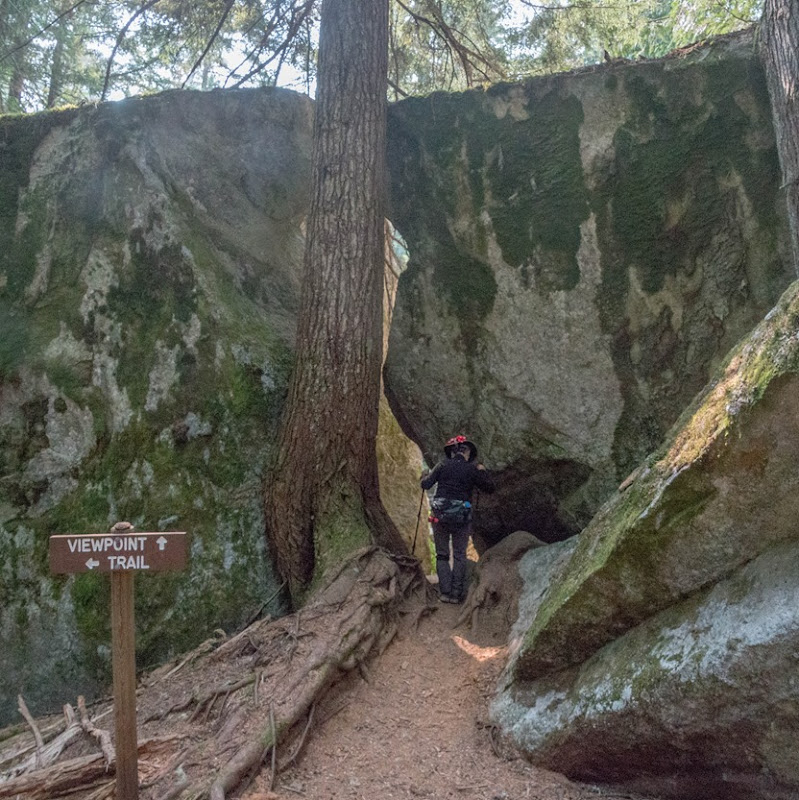 We explored the creek for a short while. 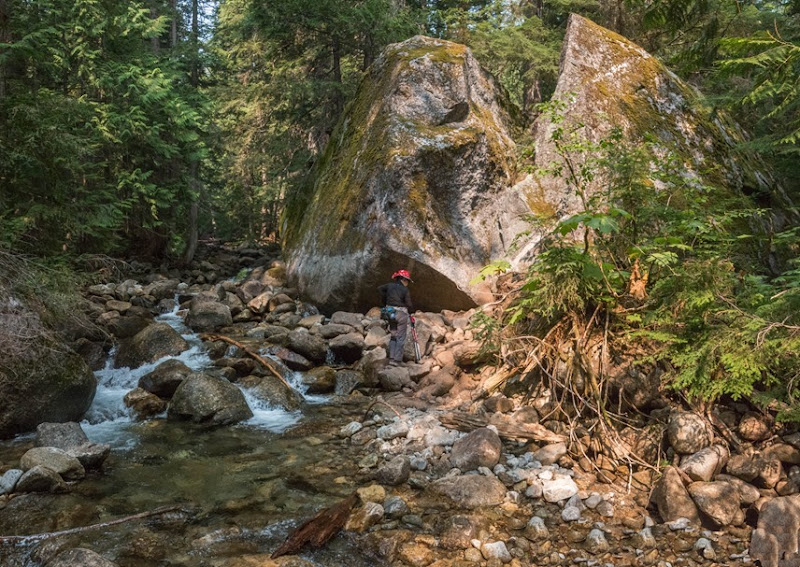 I had to create panorama shots to fit everything in because I couldn't get far enough away. The problem is that they distort things so much and the rocks looks a lot smaller than it was. 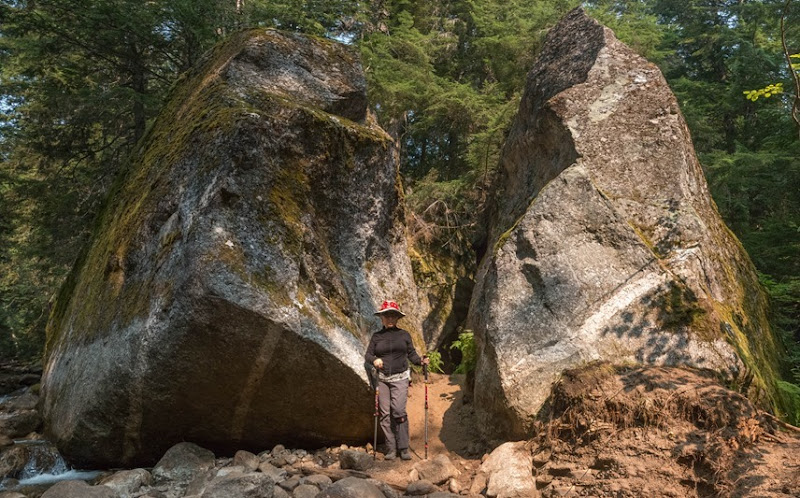 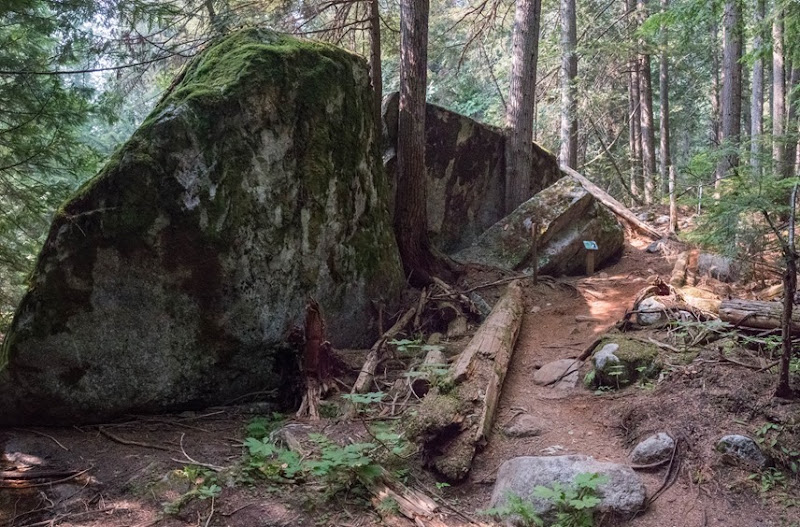 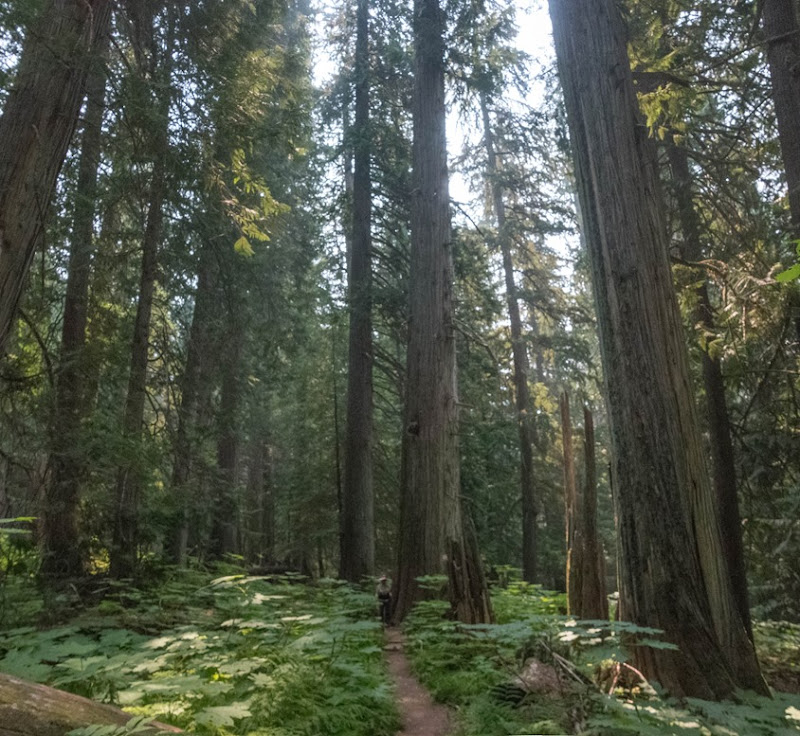 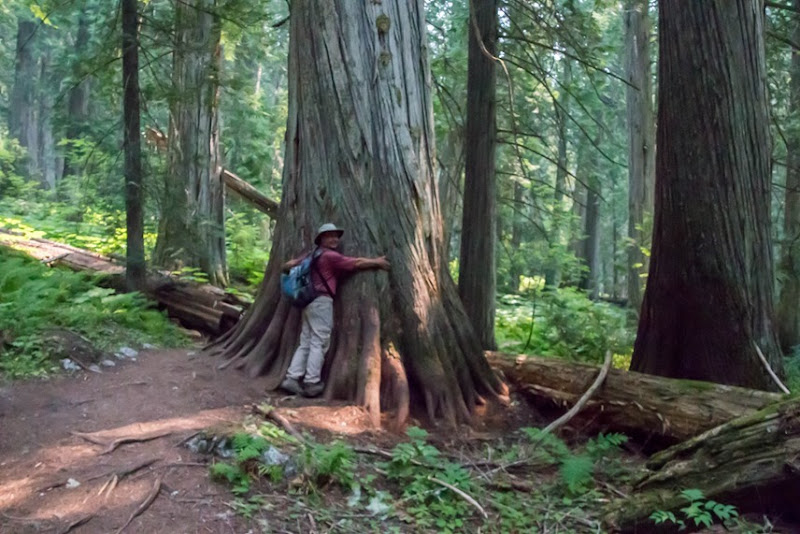 And some strange ones. The sign said that they think the rock rolled here after the tree was growing for a while and it started to wrap around it. 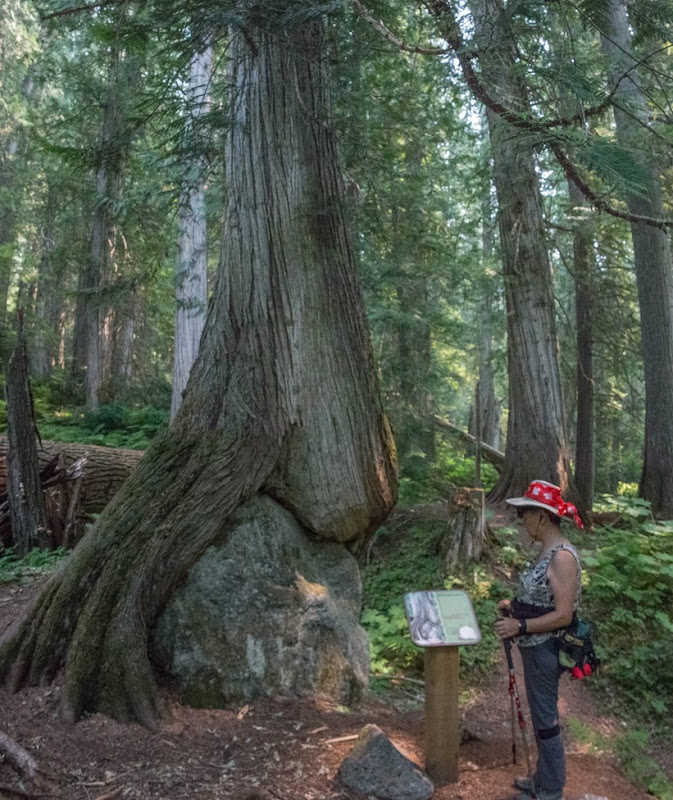 We went through an open area cleared by past avalanches. There was a sign warning about bears because of all the berries and that there were stinging nettle plants. We didn’t touch any but if there were there they would be hard to avoid as the trail was very overgrown. 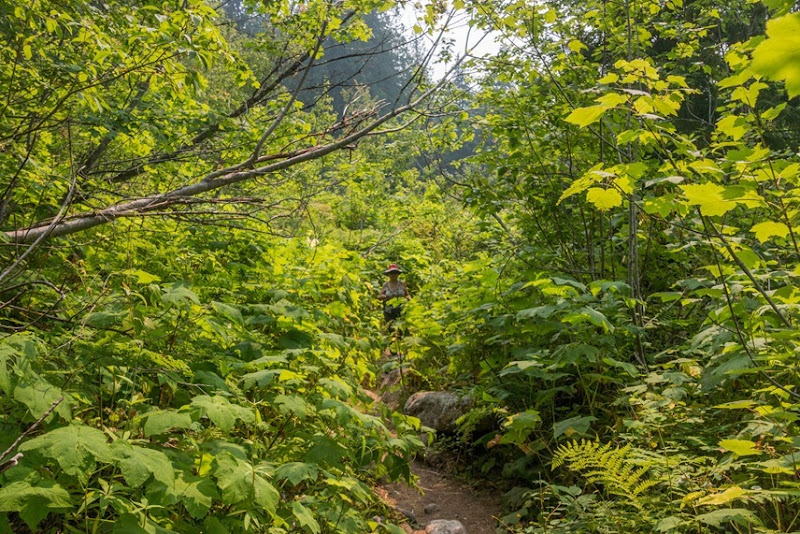 We did get to see some of the mountains above us. 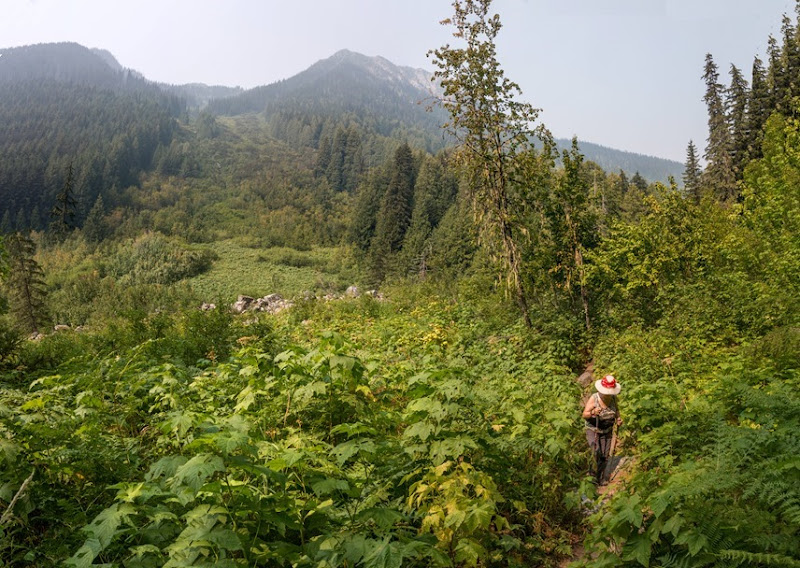 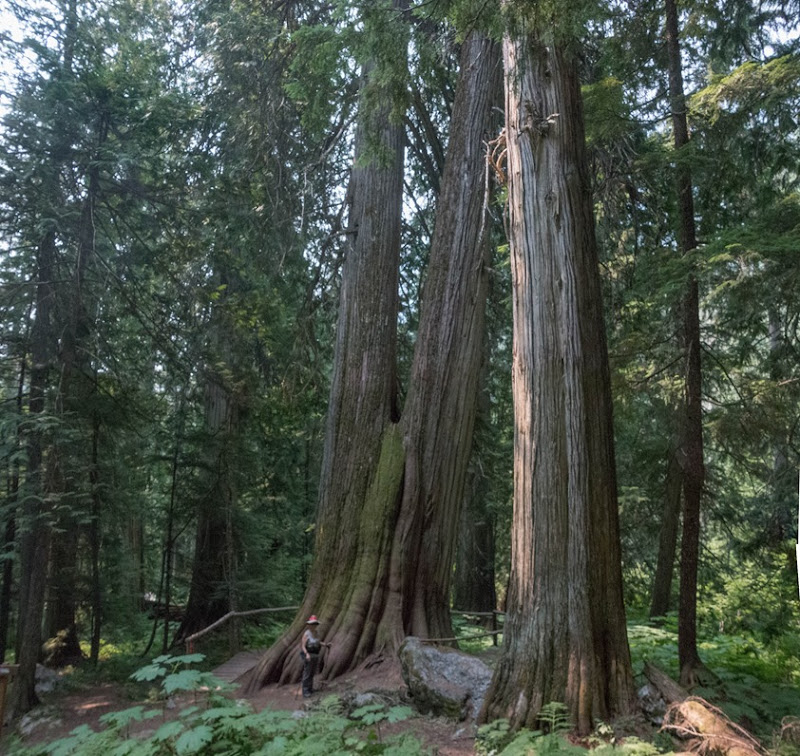 One of the few flowers we saw. 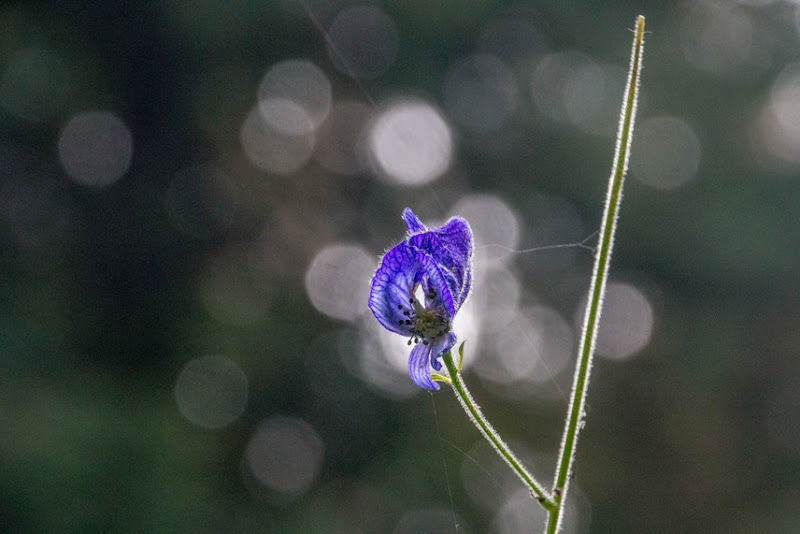 Down at the bottom of the trail, it had once continued across the creek. Then this bridge was destroyed. Later I worked my way to the other side (not across the bridge) to see the culprit. 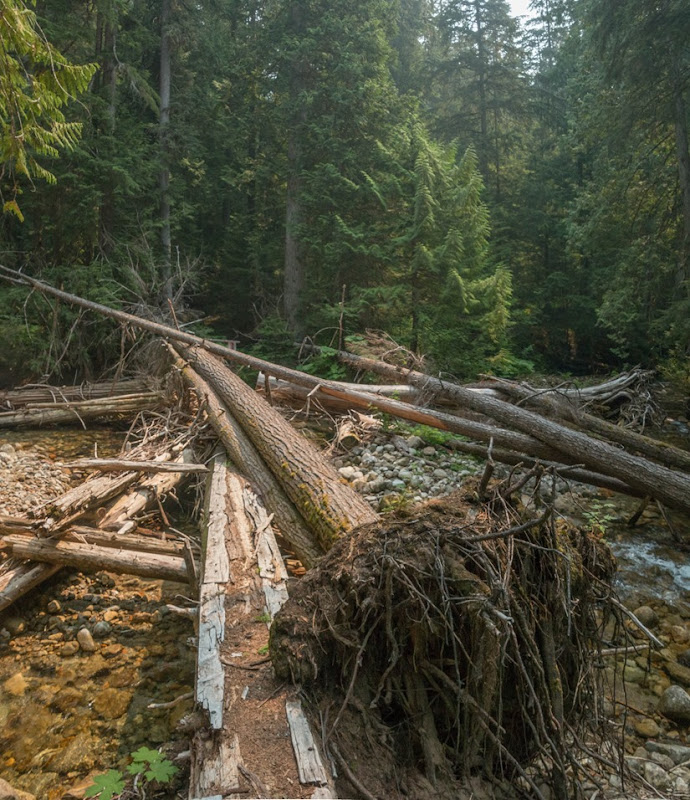 We found a nice, smooth, giant log to sit on for lunch. I think this is the new unofficial bridge. 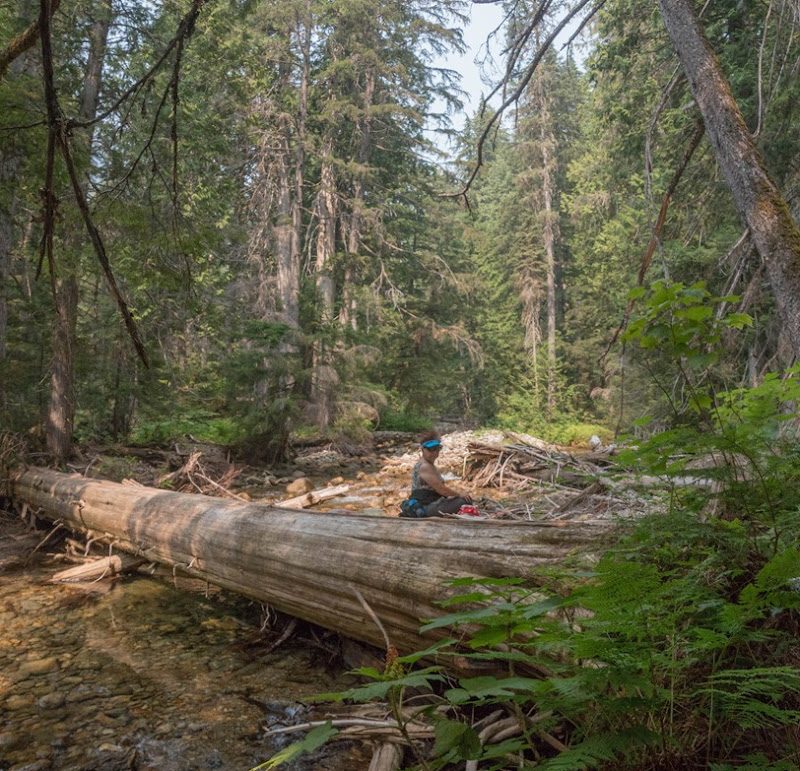 Then we made out way back to the car and drove the remain 5 k to the park entrance. This was by far the worst section of the road so it was really slow. 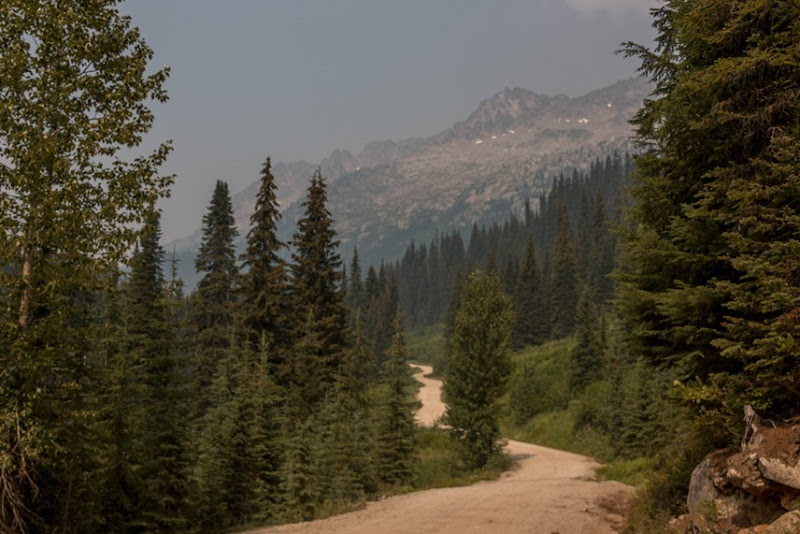 Gibson Lake is right next to the main parking lot. There is a trail around it but we just went for a quick look.

Once again it was a nice mountain view that would have been so much better without the smoke but at least we could see them. I think there is a large fire in the northern part of this park.

I went over and stood on the bridge where the creek leaves the lake. 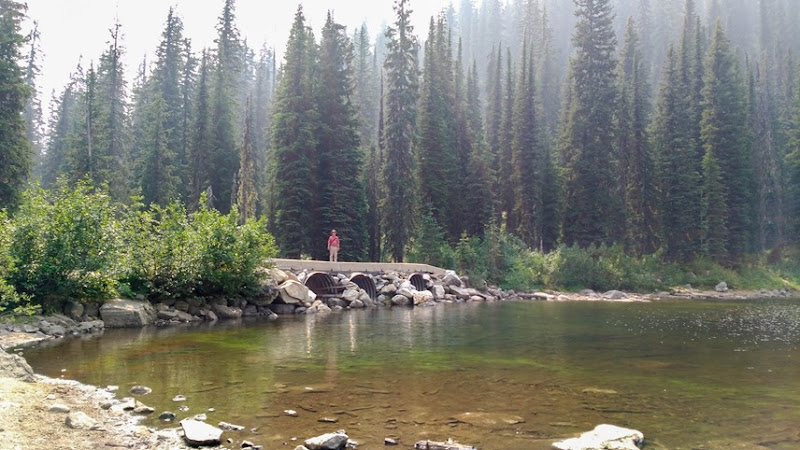 Looking back towards Jennie. 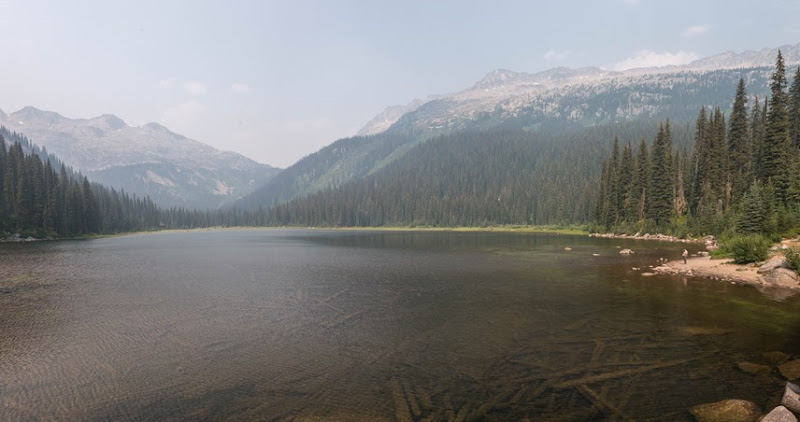 The only other trail here gives you access to the rest of the park. You must first go 4.5 km and climb 450 m to Kokanee Lake. I would have loved to do that trail but I know it is beyond us. You can proceed further to Kaslo Lake and then Kokanee Glacier Cabin. The cabin is supposed to be very nice with its own hydroelectric generating station and flush toilets.

The strange thing here is that if you leave your car overnight in the parking lot, to do a multi-day hike, you must surround it with chicken wire or porcupines with come and eat you tires and brake lines. There is a bunch of rolls of it for people to use. 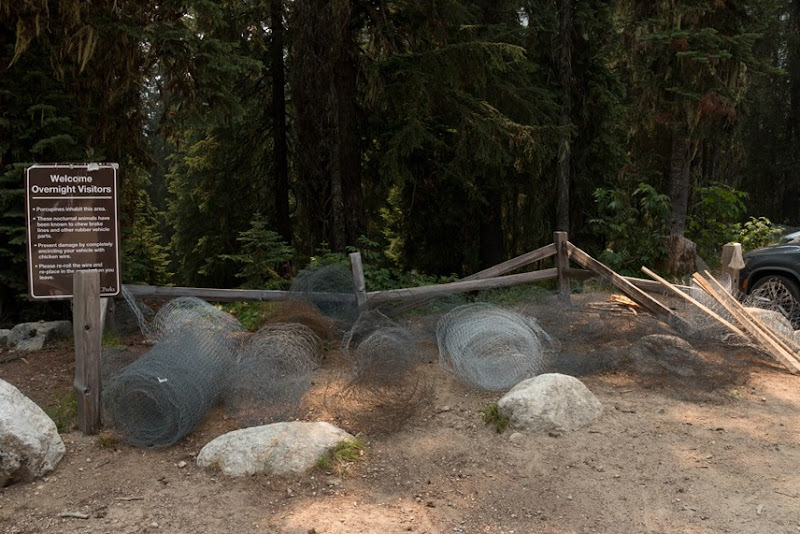 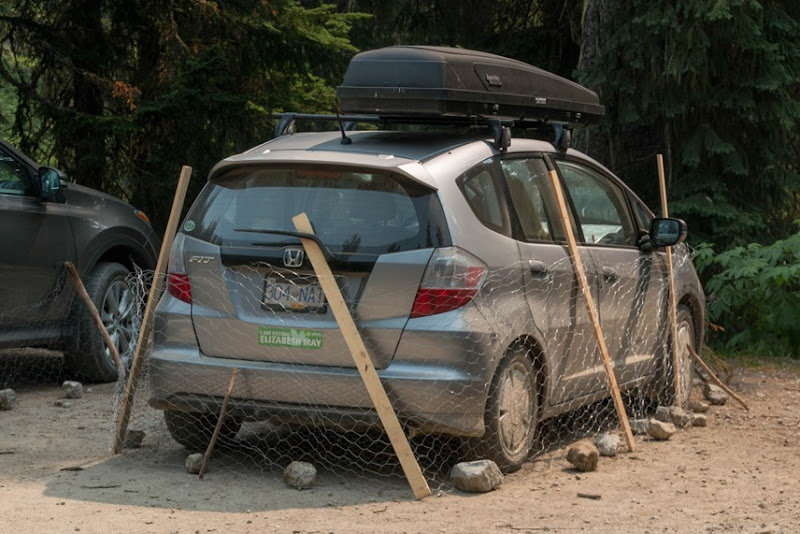 Most of the cars were wrapped. 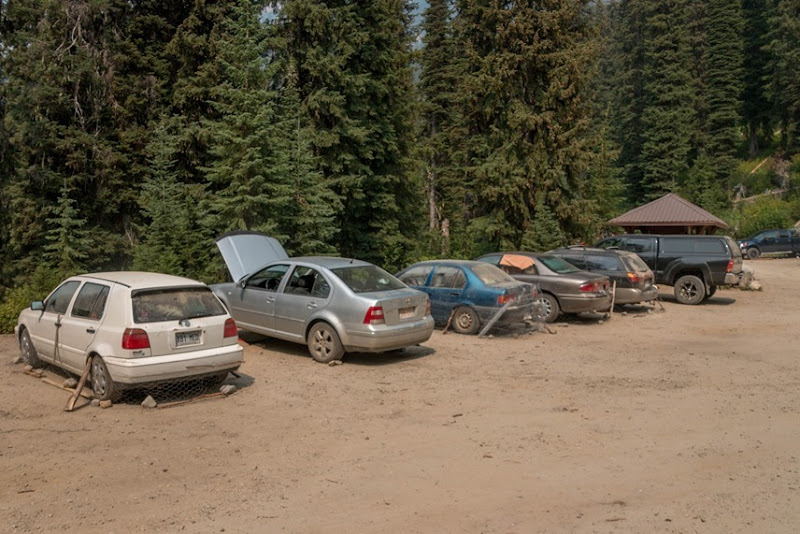 When we got there I thought that the guy with his hood up hadn’t listened but it turned out that coming up yesterday he had hit a rock and cracked his oil pan. They came back with some jack stands and epoxy to do enough of a repair to get the car off the mountain.

Then the slow drive back down. There was actually a lot of traffic. I think we met around 10 cars heading up.