Today we did a 5 km, easy, looping hike from our campsite out to the beach, then up Kokanee Creek and finally through the forest back home. 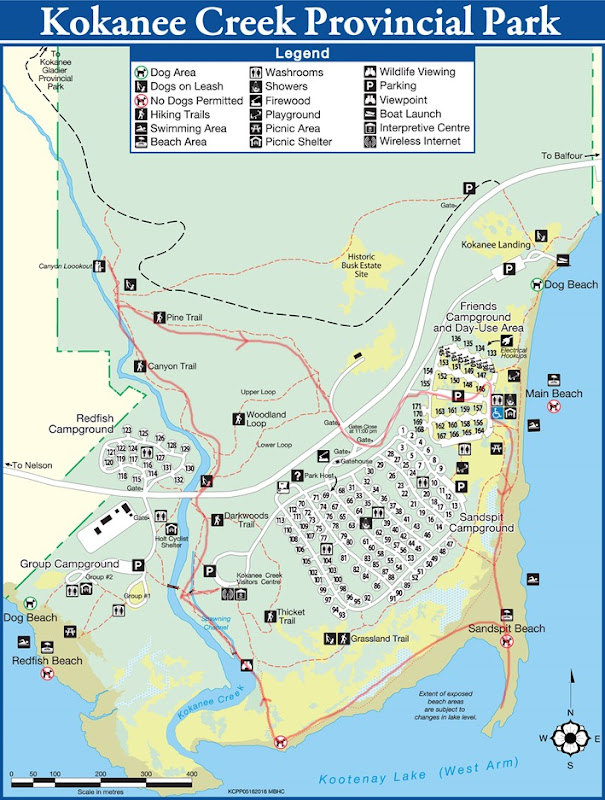 There was hardly anyone on the beach this morning. 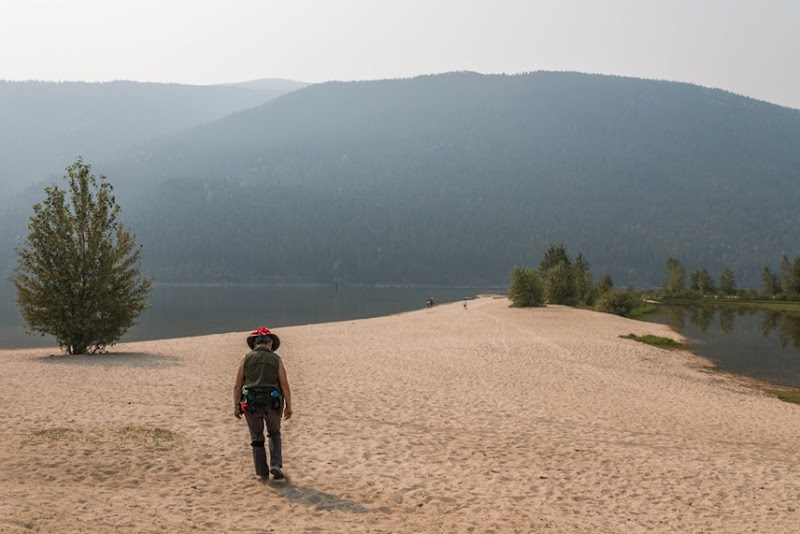 With no wind the lake was flat calm. There would have been some nice reflections without the smoke obscuring everything. It stills makes a nice moody picture though. We headed out to the end of the sandspit. 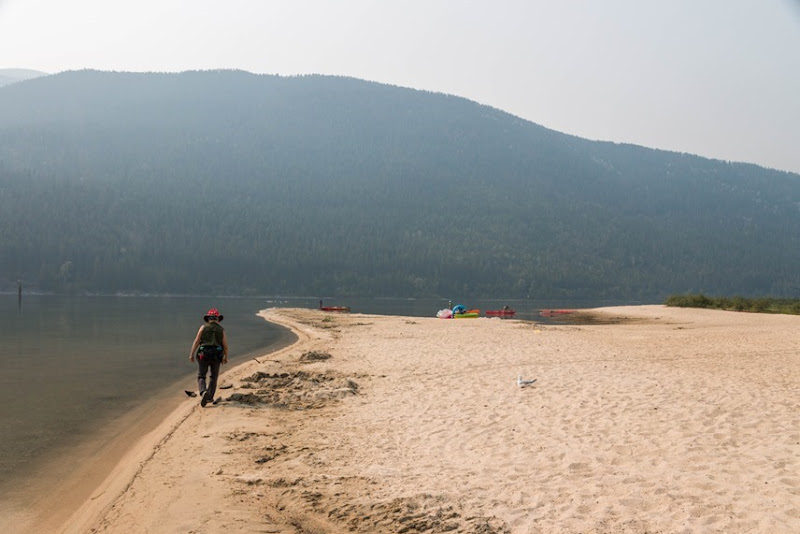 The lady in the kayak said that you could walk out a long way in the shallow water. I’ll have to come back when I don;’t have my hiking stuff on. 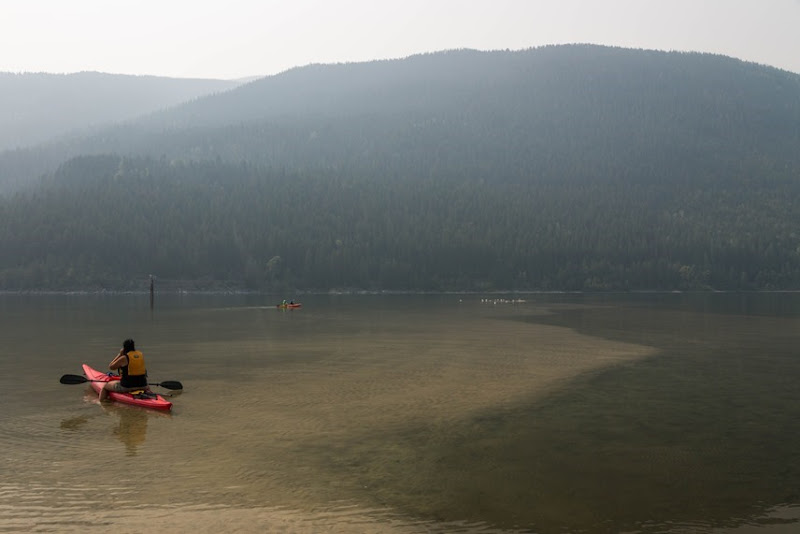 Looking back down the beach. 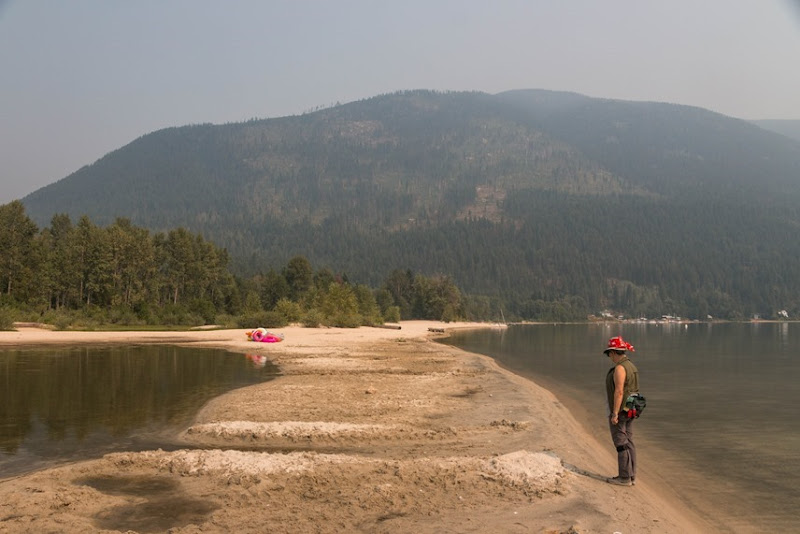 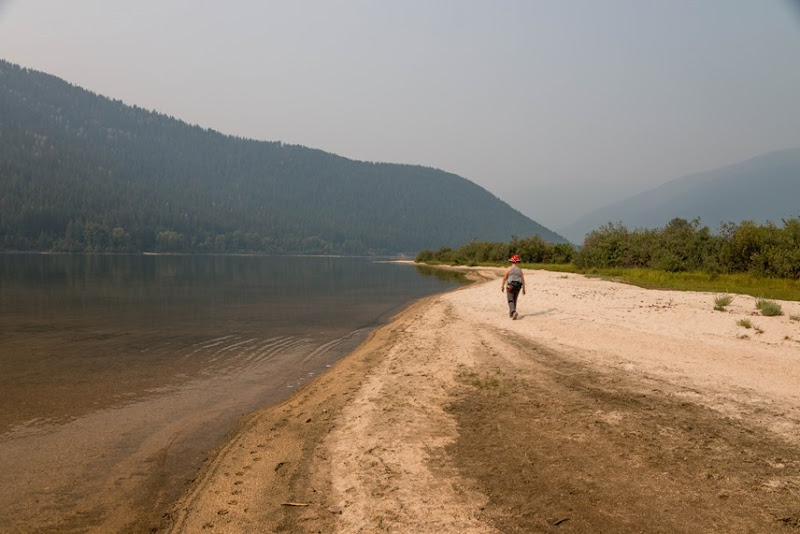 Once we get to the creek mouth we have to head inland. 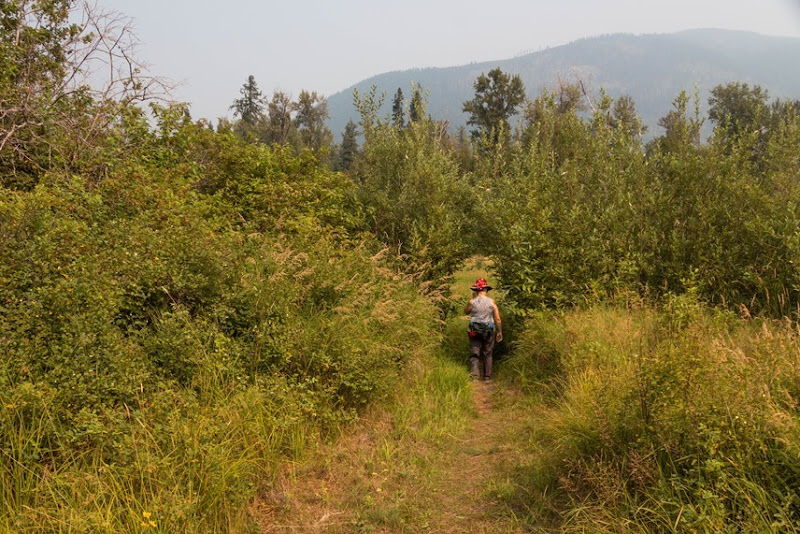 We popped out at a viewpoint to this side section of the creek. 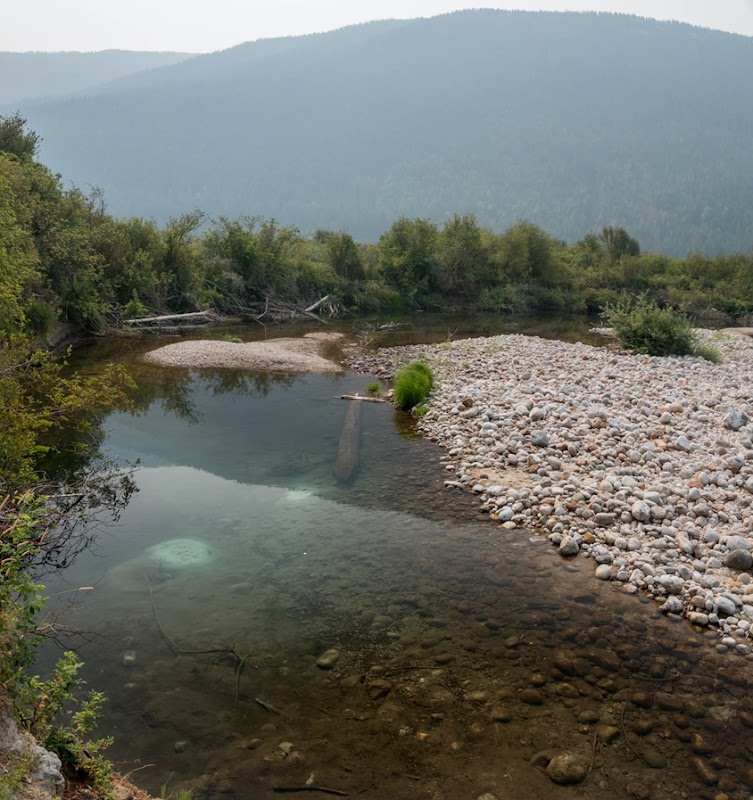 The two white spots were actually bubbling. I don’t think it was hot but just gas from underground somewhere. 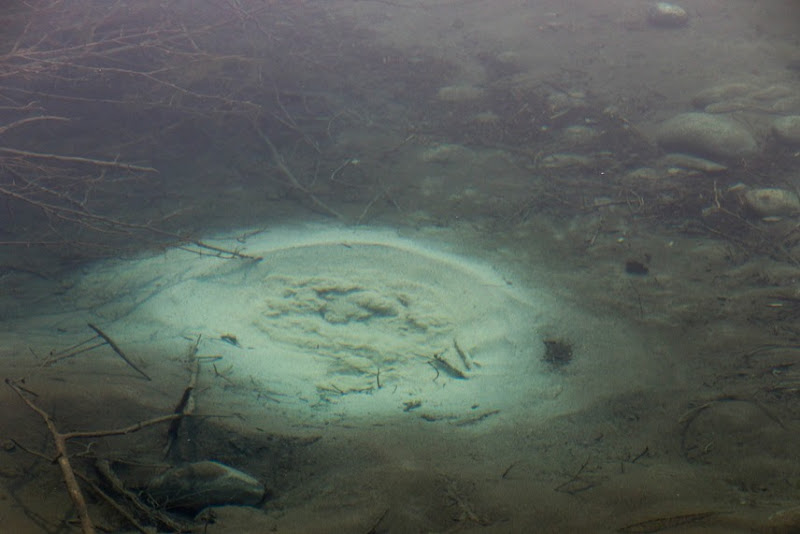 I didn’t know it until this morning when we got to the creek but one of the main attractions of the park is a Kokanee Salmon spawning channel. The run started on the 5th and doesn't’ peak until later in the month but there was a sign saying that here 410 salmon in the channel.

The Kokanee Salmon are trapped in Kokanee Lake by a dam so they never get to the ocean. They are much smaller than the oceangoing ones. 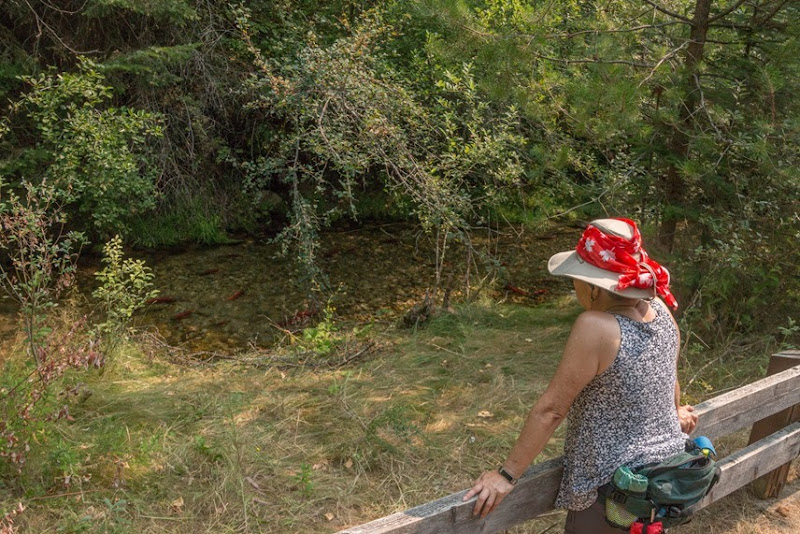 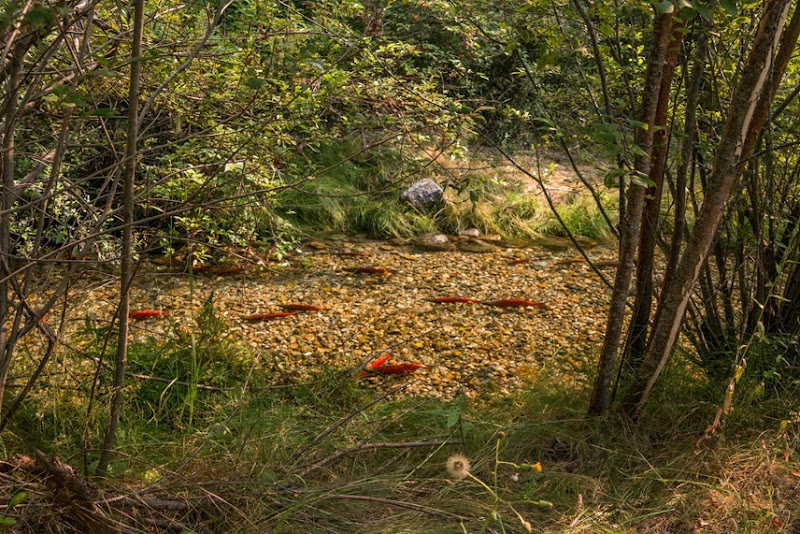 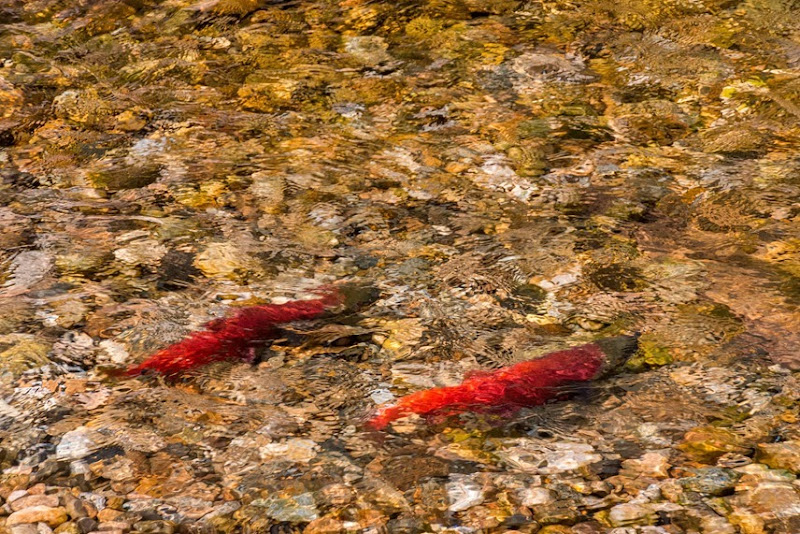 The channel is actually man made. The salmon used to spawn in Kokanee Creek but when they straightened the creek to prevent it from flooding the roadway it silted up and filled in all the rock beds that the salmon need to lay their eggs in. They built this channel beside the creek and filled it with the perfect sized rocks and gave it many levels with small rock cascades for the fish to jump over. 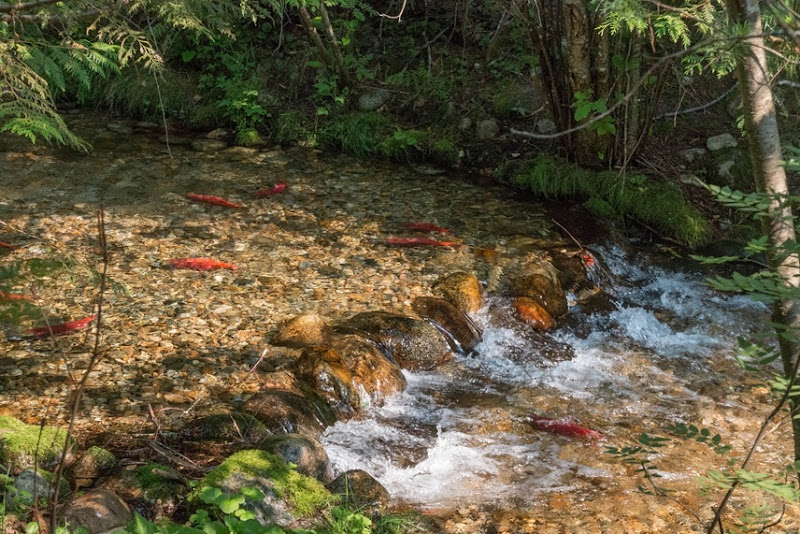 At the top of the channel, once the water has been diverted from the creek it first goes to a settling pond for all the sand to drop to the bottom. Then it goes over the edge of a small waterfall that the salmon can’t get over. The resulting water is very clear  We saw the pile where they dig the silt out of out the pool every once in a while

They have built a nice new viewing walkway beside the channel. 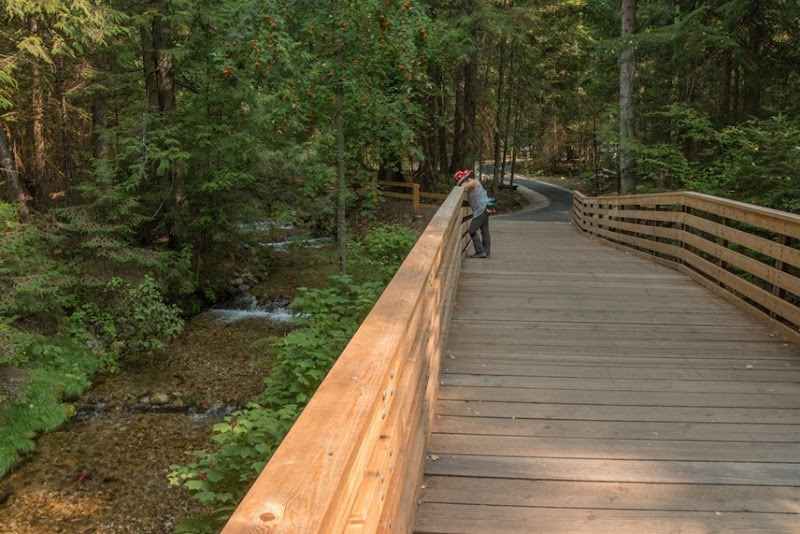 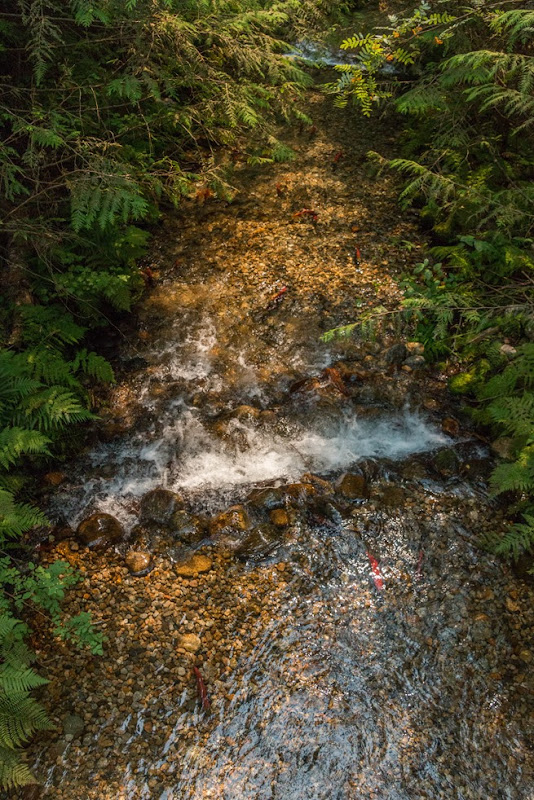 The fish seemed to be very evenly spread out between the different levels of the channel. Each level seemed to have between 5 and 10 fish. The females stayed in one place while the males fought and bit each other to protect or find a mate. 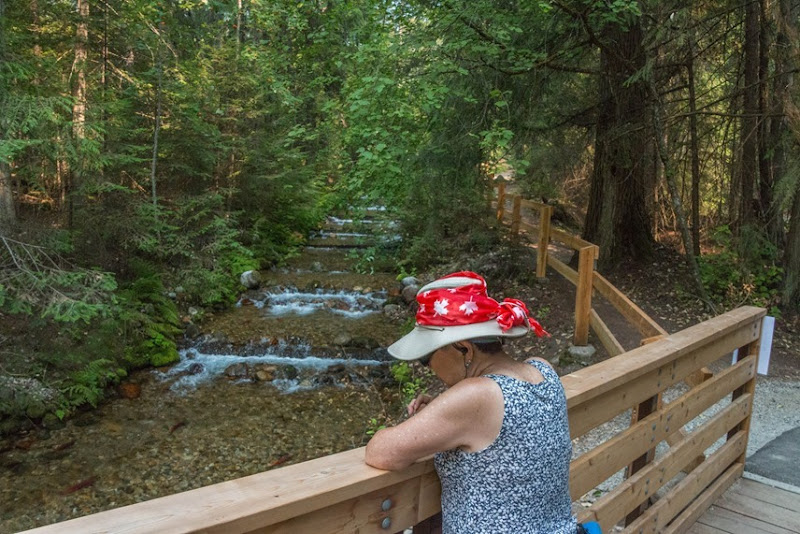 We’ll have to check it out later before we leave, to see how much busier it gets. 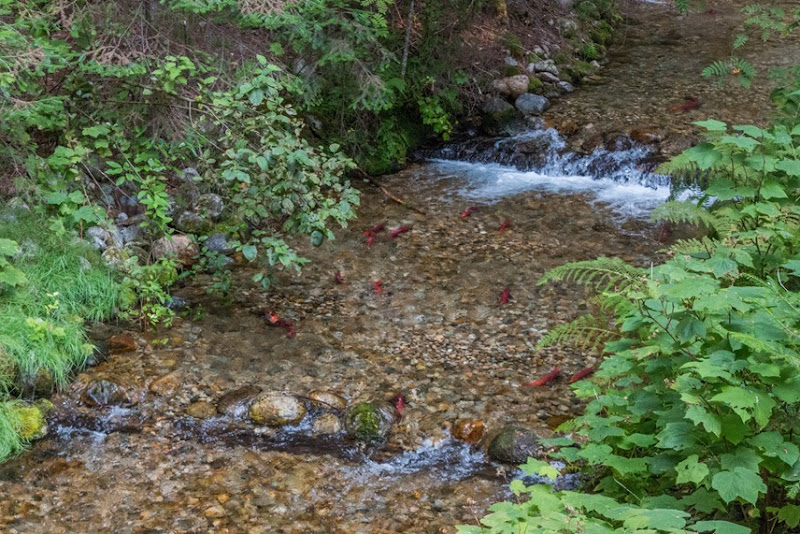 We continued up the trail along the main part of the creek. 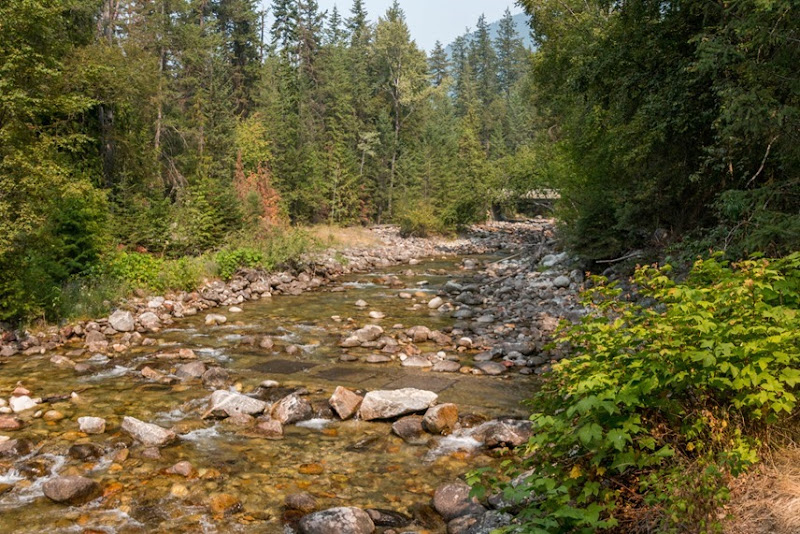 Farther up we got another chance to get out to the creek at a steeper section. The tall view. 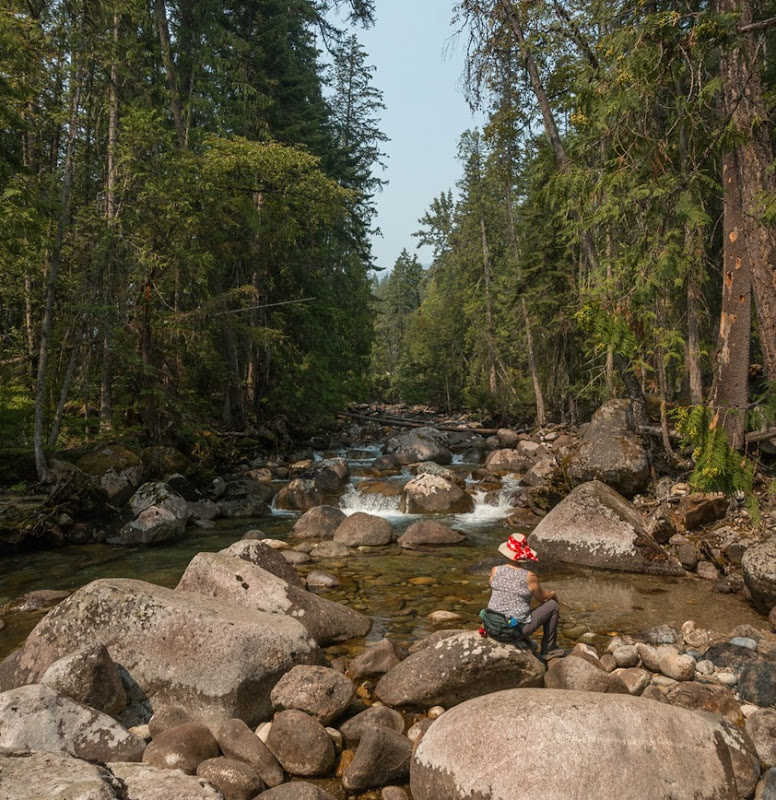 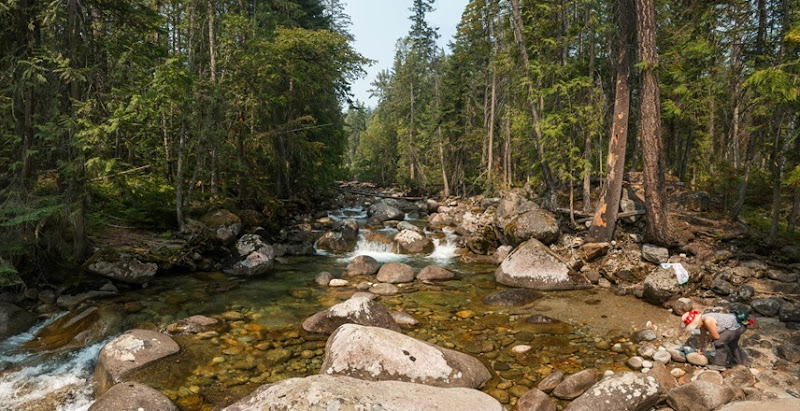 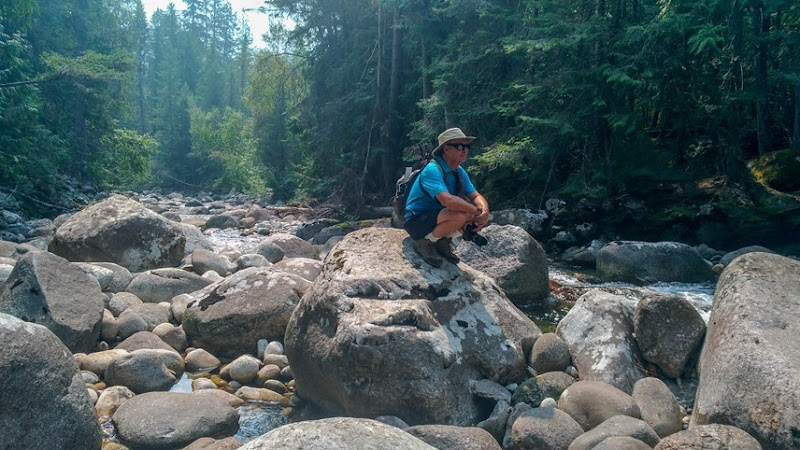 Our destination and lunch spot was called the Canyon Lookout. The creek gets squeezed in a narrow spot.

There was a nice set of stairs down to the lookout. 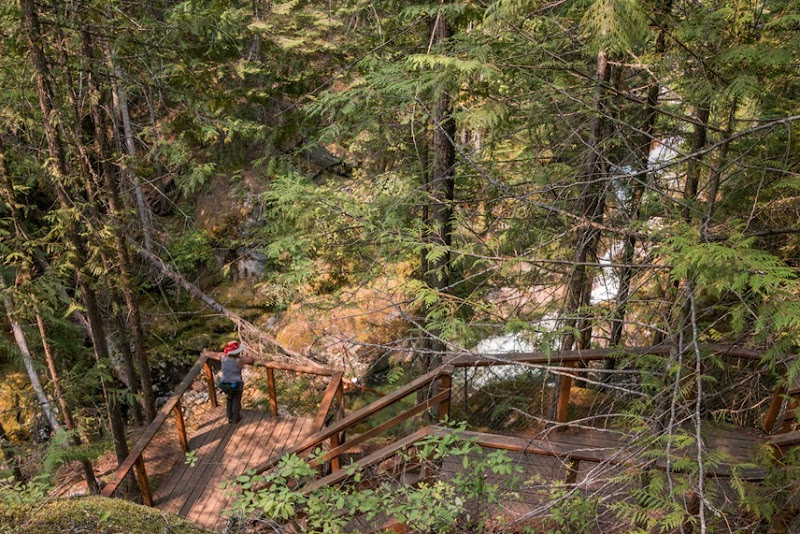 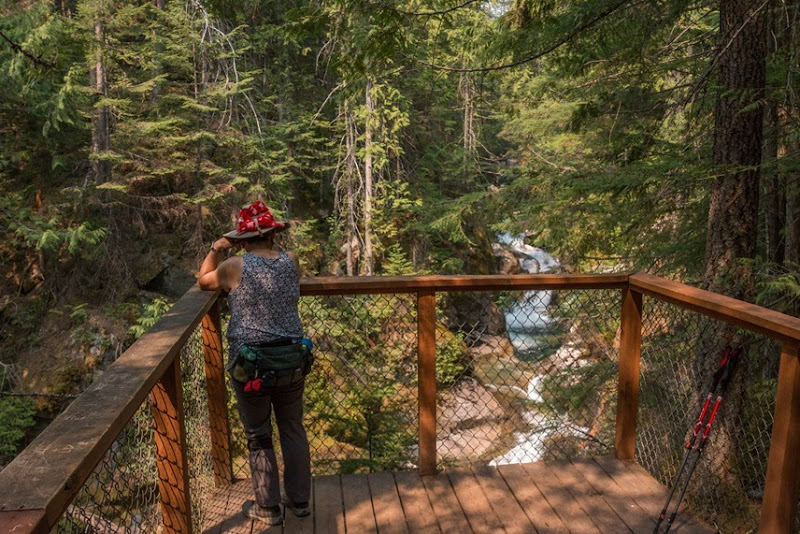 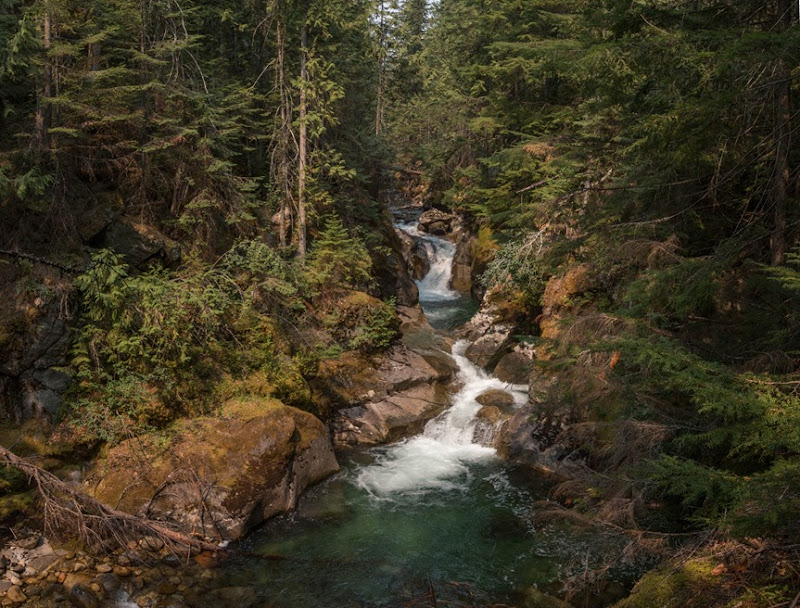 This guys kept pestering us. No stings though. How do you tell the difference between a bee, wasp or hornet? 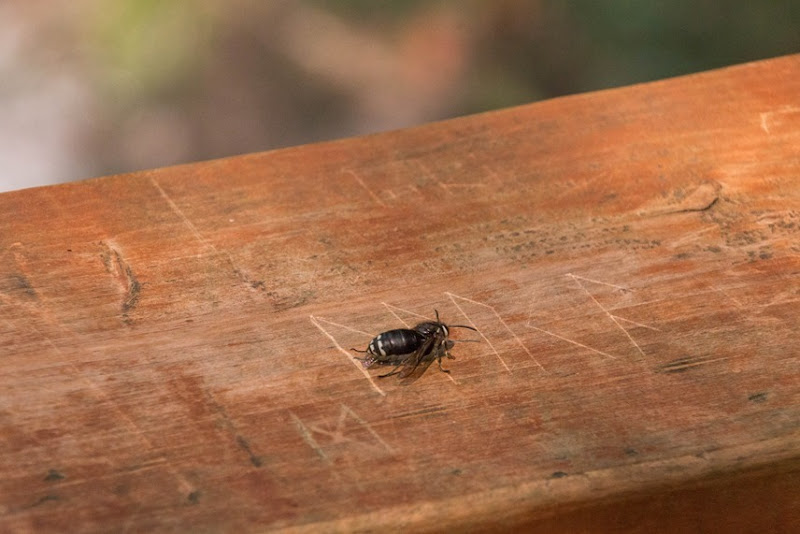 Then we took the wide open Pine Trail back towards the campsite. 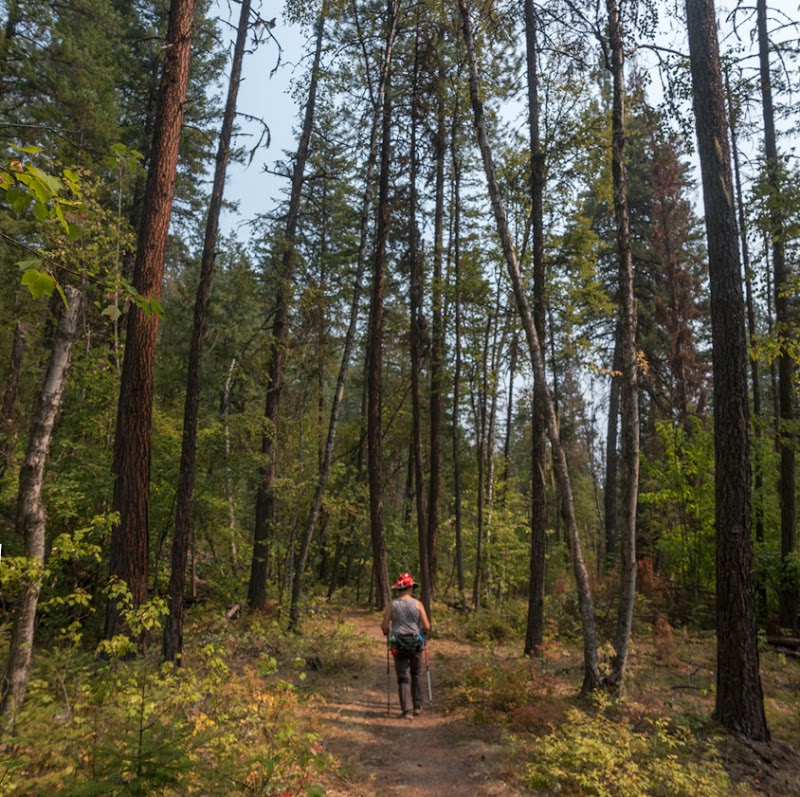 To a relaxing afternoon.