We took it easy today and went to two very close by waterfalls, that only had short walks to see them. We really just wanted a nice place to have lunch. 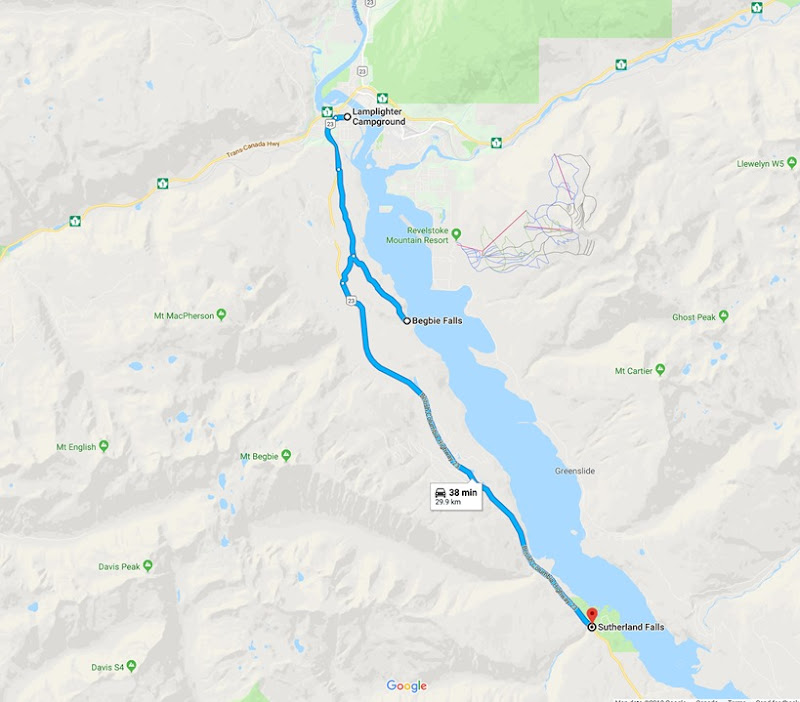 Begbie Falls is just 4 km off the highway but the last two are a rather rough, potholed, one lane dirt road. There are no signs on the highway and the first one you see is at the start of the dirt road. I was rather surprised at the number of people we saw there. Going in and out we had to shuffle aside to let 6 cars coming the opposite way passed us. There were also 5 cars in the small parking lot.

It’s only about a 100 meter trail down to the falls.

To get good pictures of both of the falls today we should have gone early in the morning but that was not the main purpose of today’s outing. So the picture are not great but the falls were nice places to visit in person.

Down to the viewpoint fence. 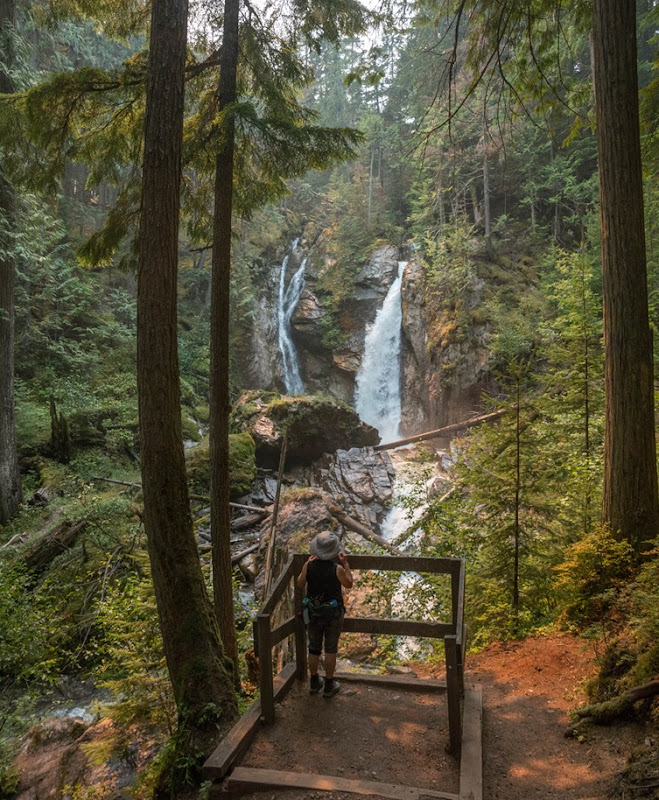 Which everyone ignores. I worked my way to the right for a different, more open perspective. 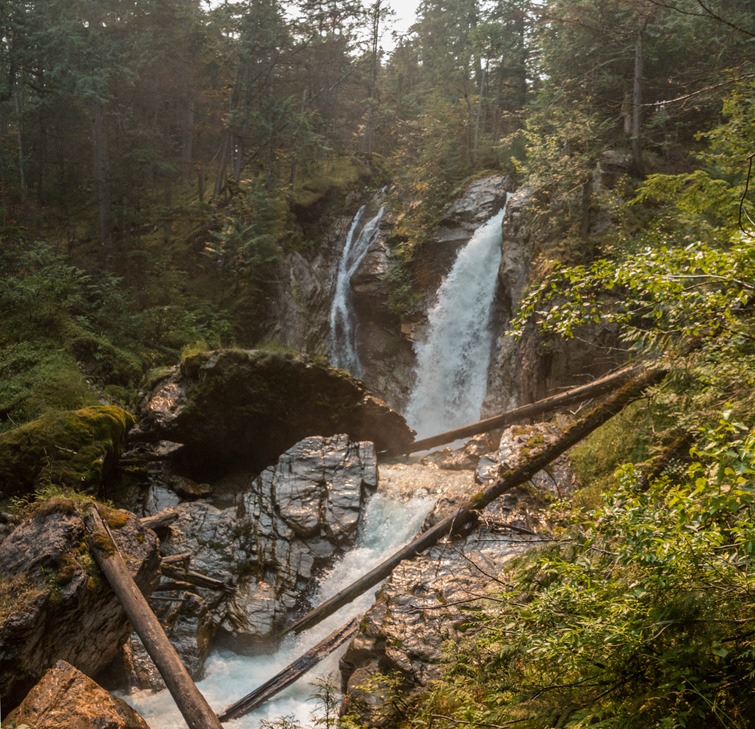 While we were there another couple came and later we saw them across the creek on that big rock in the center.

There is a trail downstream from the viewpoint to this log, which I assume they used to get across. 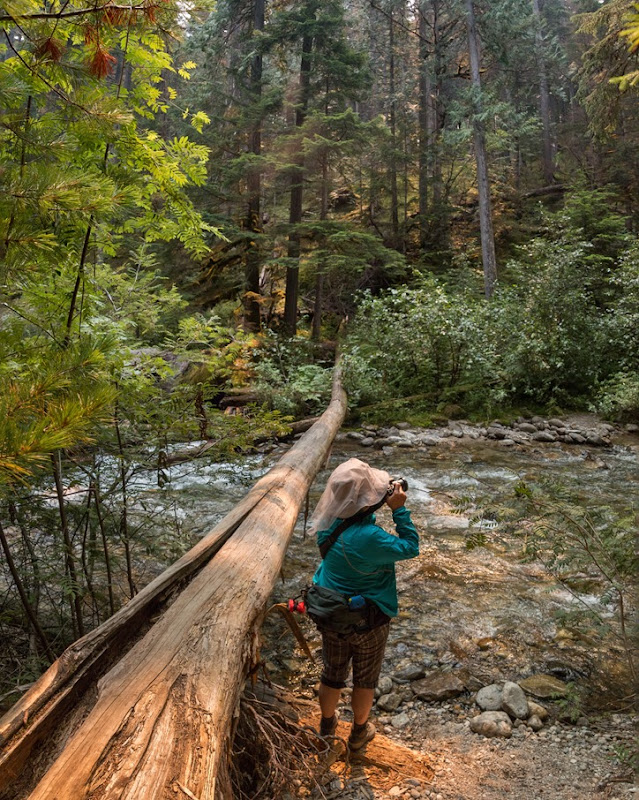 I thought about it for a second but decided I didn’t need a picture from that rock that desperately.

I just got a shot of them. 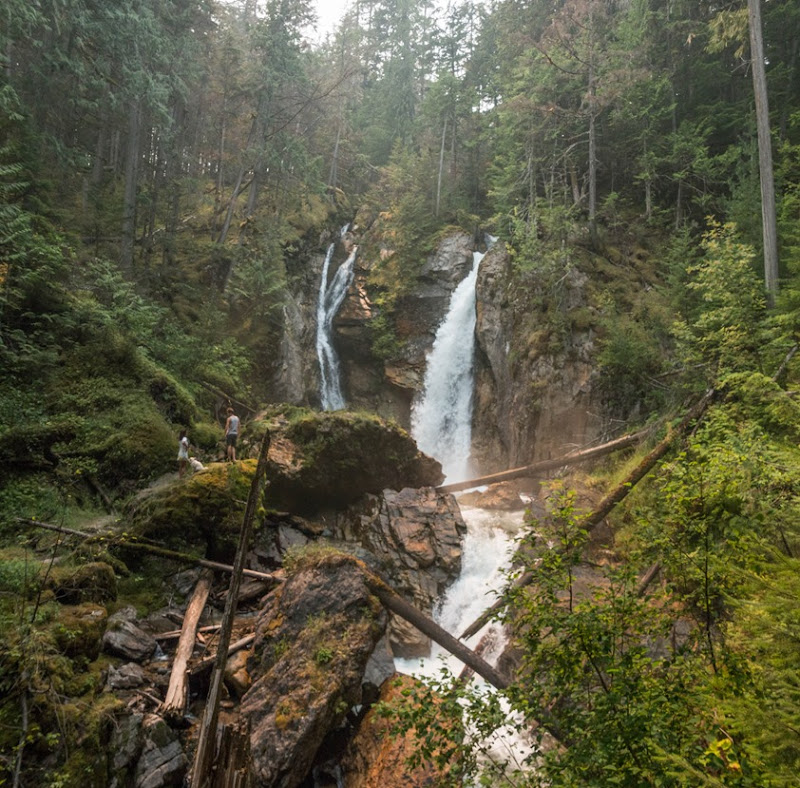 It was actually quite cool down near the falls so we decided to move on for our lunch spot.

We always stop for mushrooms, especially red ones. 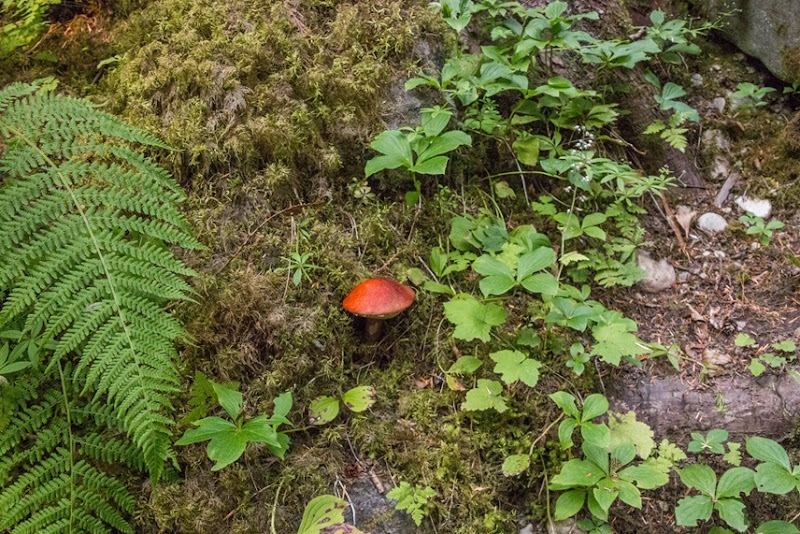 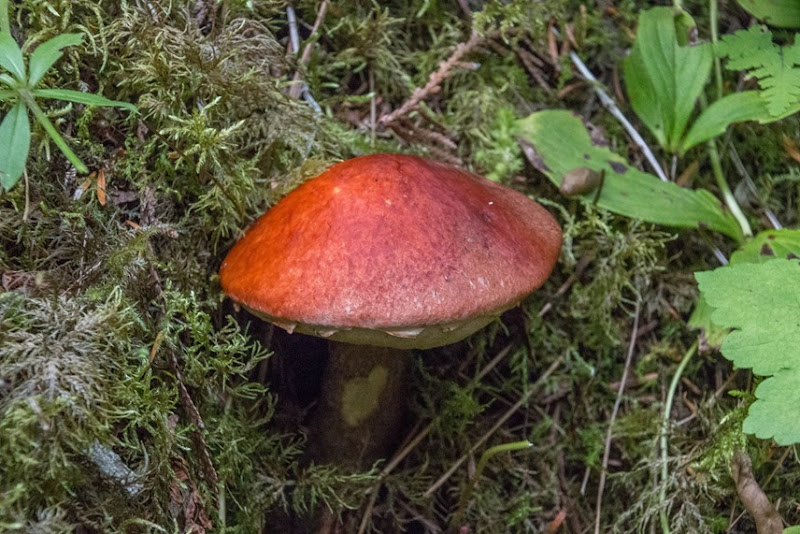 Then up the short set of switchbacks to the car. 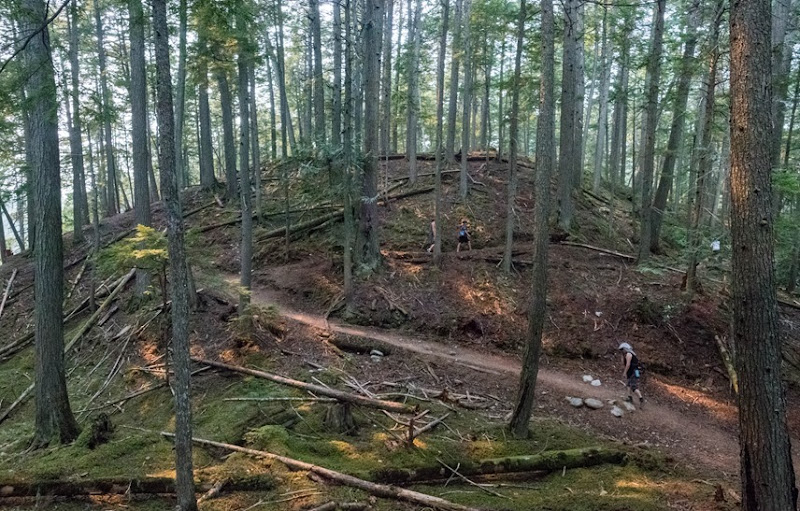 We decided to go down to the beach and find a picnic table for lunch.

The park is right next to the Columbia River but the beach is not on the river. The park has what seems to be an artificially created pond with a beach around it. 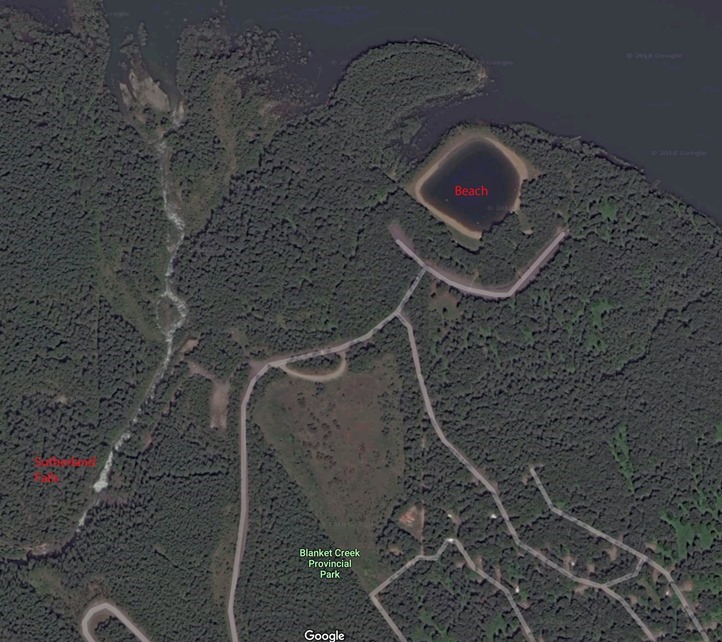 It is a great place for families. It has a shallow sandy bottom, no waves and is sheltered from the wind. Everybody had their inflatable stuff out to just float around.

For some reason the bugs were really bad here so we didn’t stay as long as I would have liked. I did feel the water and I think I could have gotten in.

The parking lot for Sutherland Falls is just a short way back up the park roadway. From there it is a 3 minutes flat walk to the falls. The main drop of the falls is about 45 feet high.

This was shot from near the official viewpoint although I had to go around the fence to remove two giant trees from the foreground. 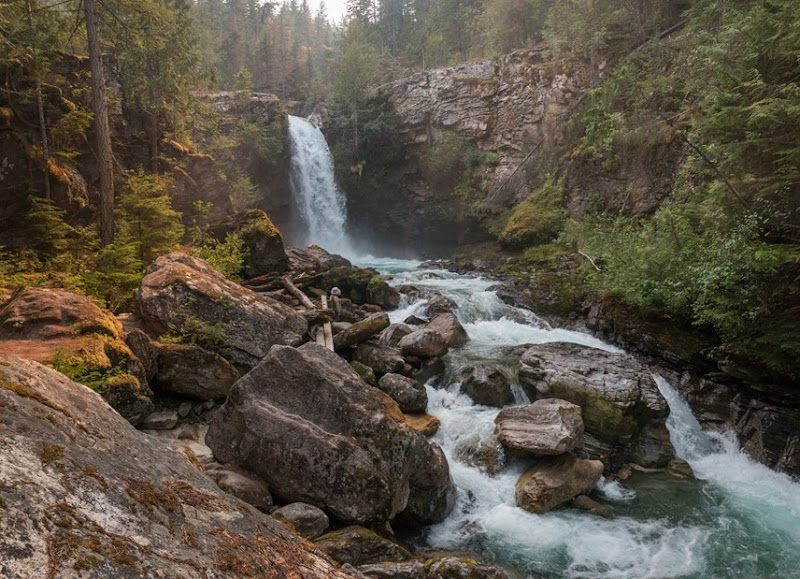 Jennie wanted to get closer. You can see her standing in the middle of the picture. A shot from her perspective. 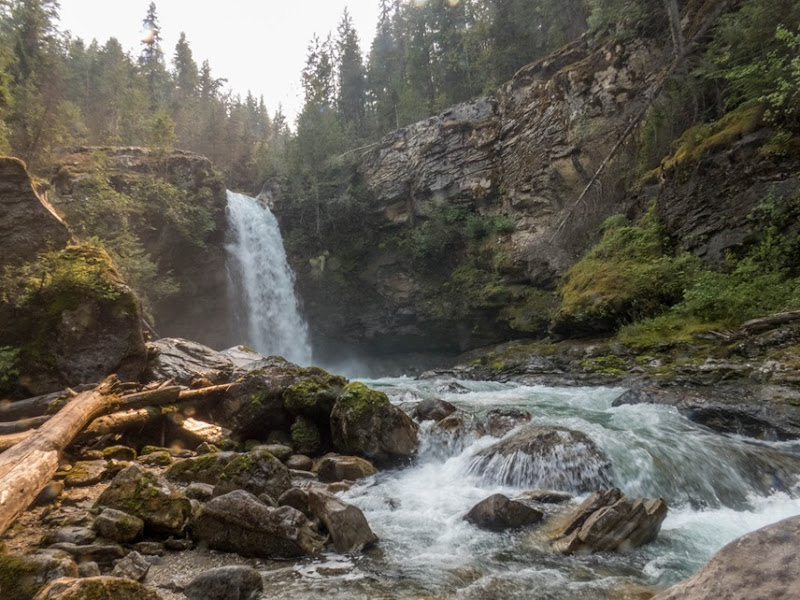 She is always looking for interesting rocks. 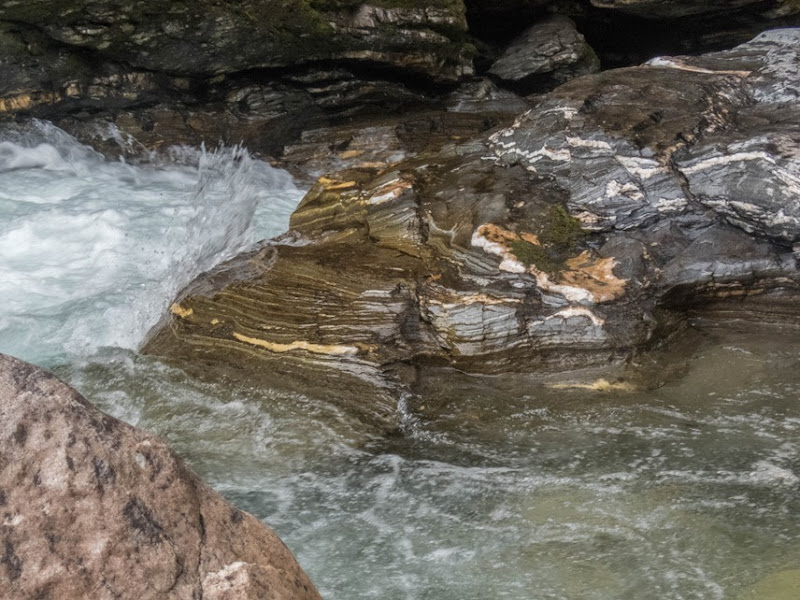 I tried to get as close to the falls as I could, which was just behind that big boulder to the left of the falls in the picture above.

There was so much mist that even when I wiped the lens and then quickly flipped the camera up for the shot, the lens almost instantly got covered in water. 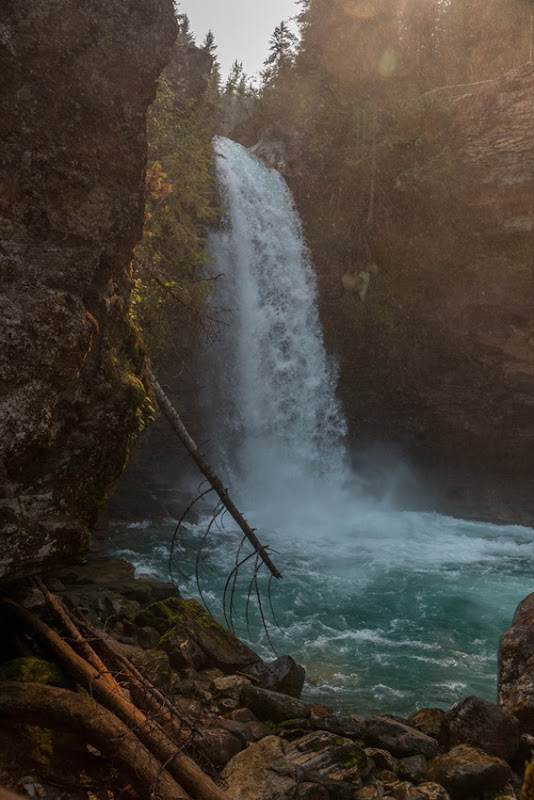 Back near the viewpoint I got some shots down closer to the river. 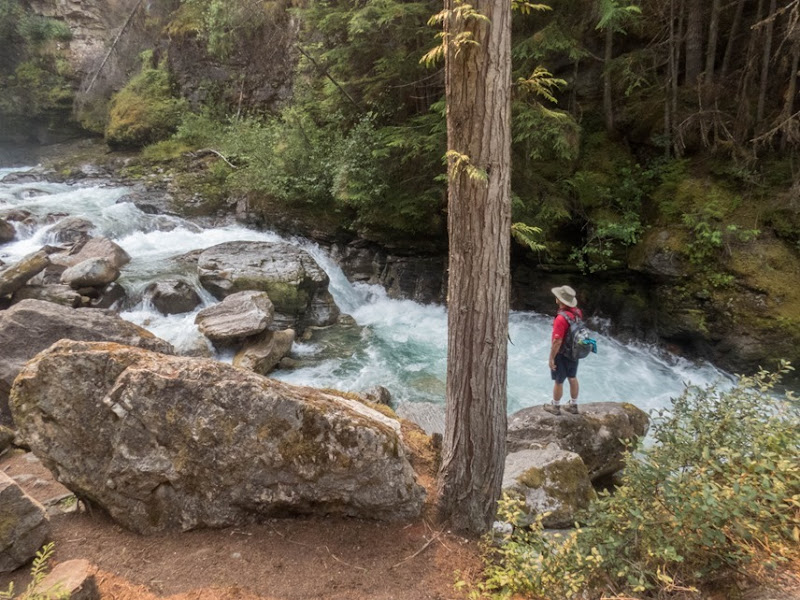 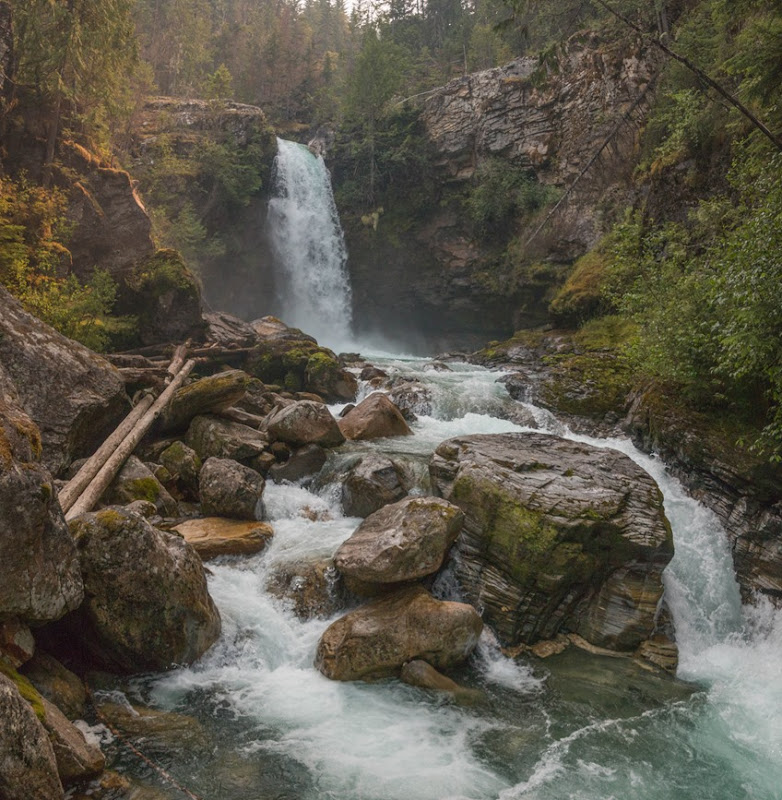 And the wider version. 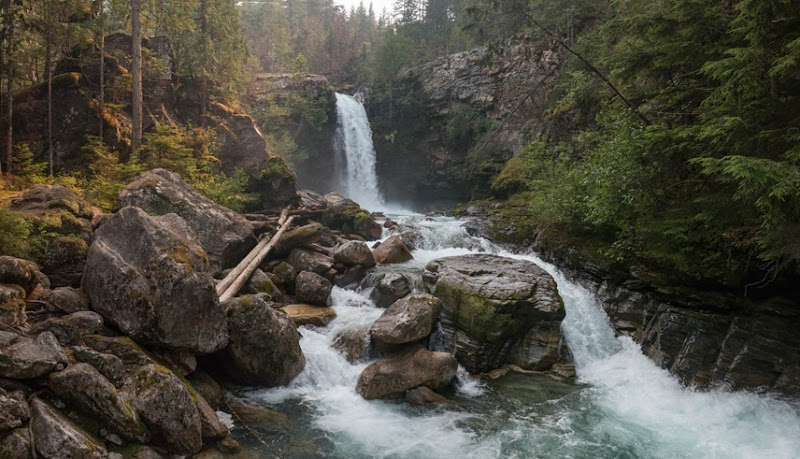 After staring for a long time we headed home.

As we had driven in over a bridge near the park entrance, Jennie noticed that we could see down into the deep canyon of the river.

Pictures always lose the 3D effect of depth but it was a long way down and the railing on the bridge was a bit low so even I got a bit of vertigo. 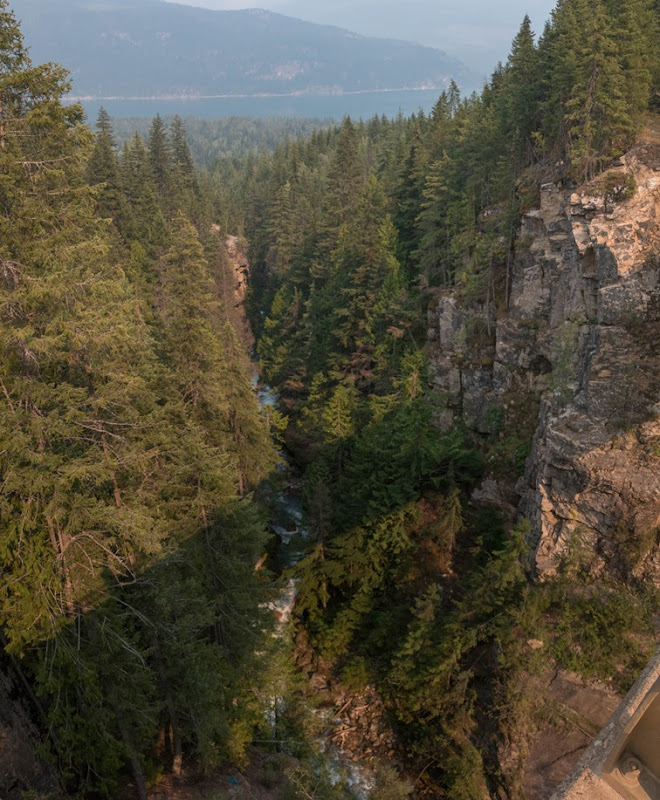 On the way here we had seen a spot where they weren’t kidding about watching for falling rocks. I got some pictures on the way home. 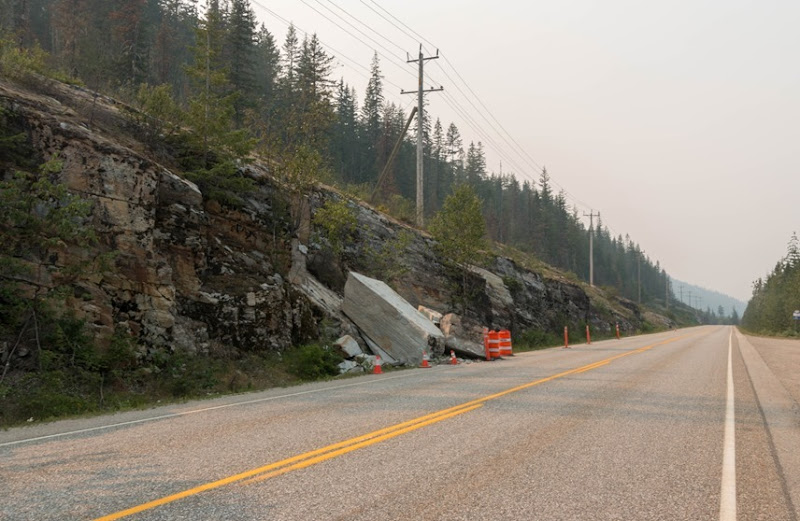 This one is a bit fuzzy because I took it from the moving car but wow! 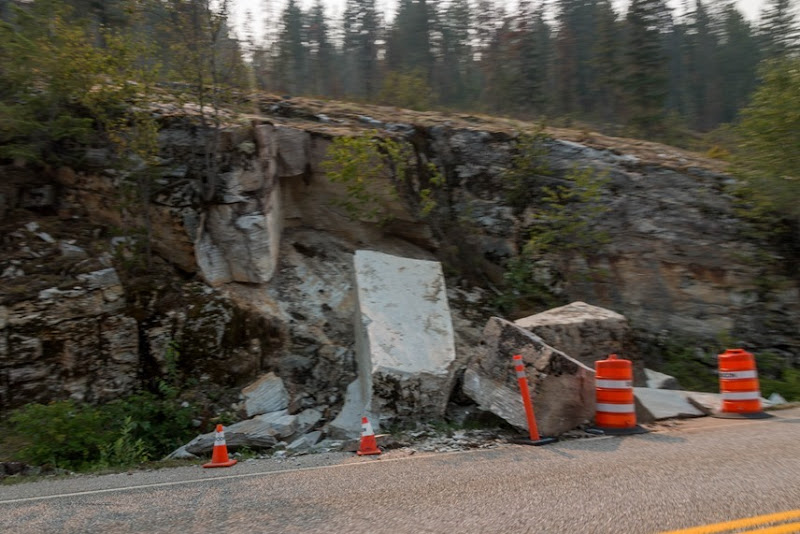