We drove  1 1/2 hours north to part of the Olympic National Park next to the Hoh River. The rain forest there is one of the not to be missed sights in Washington.

Since it supposed to be popular and this is a weekend we got up early (for us) and got there about 10:30. Much as with the Oregon caves we saw no one on the road but when we got there we found about 15 cars. After we got back from the hikes the lot was full.

The only thing to do here is hike 3 trails. Two short ones and one that goes 18 miles up the river and gains 4000 feet in elevation to the foot of a glacier. You can guess that we skipped that one. I even asked the ranger if there was anything interesting part way up and he said you had to go at least 5 miles. Nope.

The most famous trail is called the Hall of Mosses. This short 0.8 mile loop goes through a grove of trees just dripping with moss. It turns out the trees are Maples. The moss finds it easy to attach to the rough bark and the many branches.

Some creepy looking trees. Pictures aren’t great because the sky was so bright but it was very dark under the trees.

See if you can find the lady in pink about a third of the way up in the picture below. 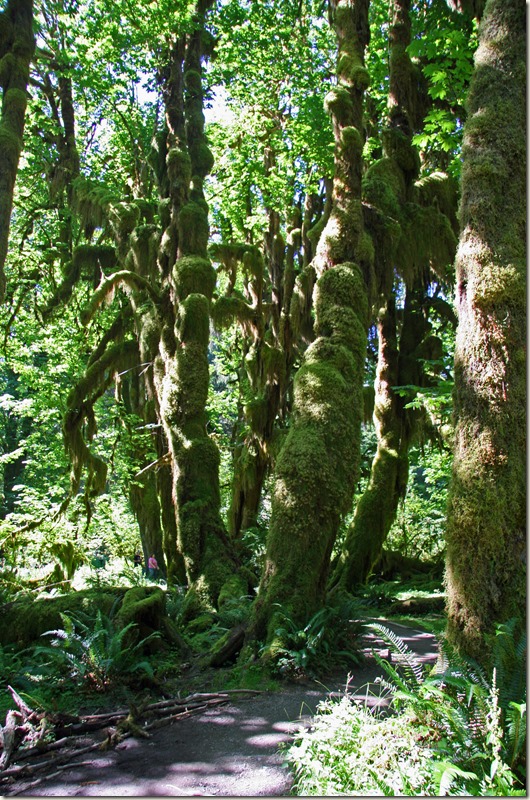 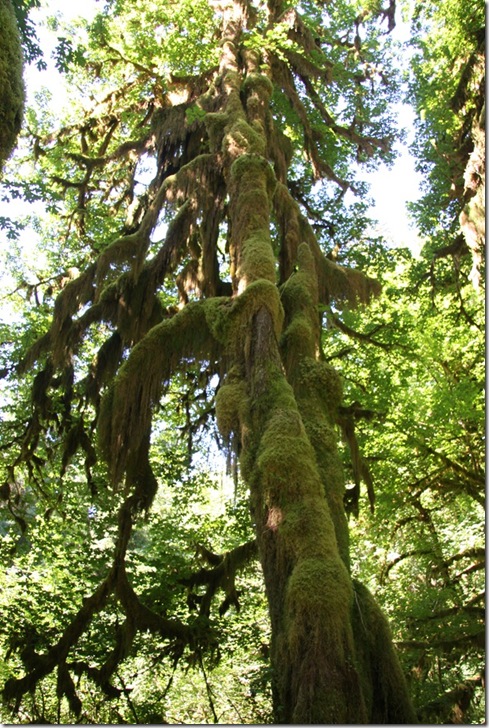 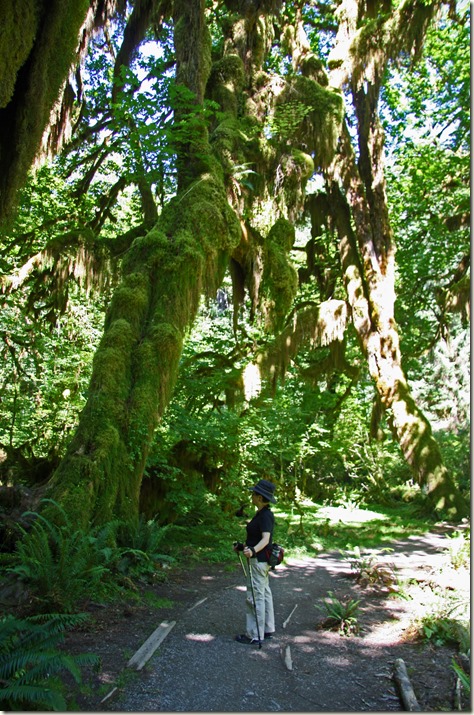 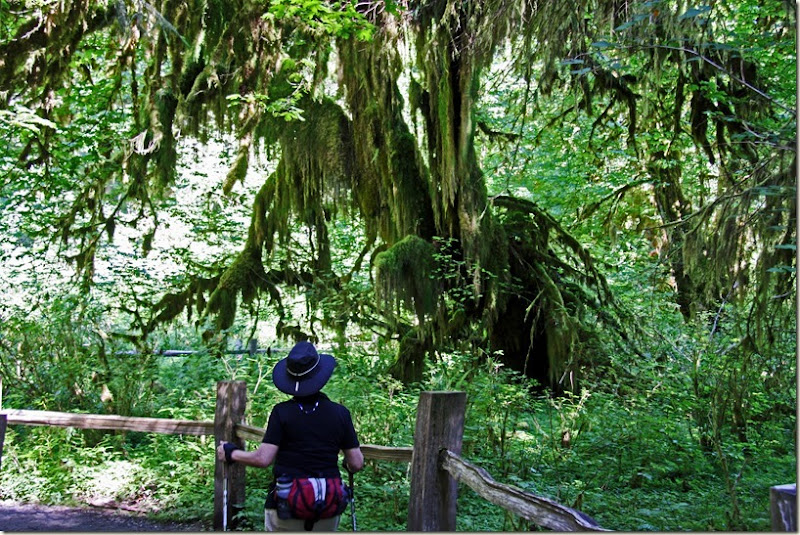 Next we did the short Spruce Nature Trail out through a grove of huge Sitka Spruce and Hemlock, then back along the Hoh river and a small stream. I’ll skip the usual big tree pictures.

You walk along beside the entire length (190’) of one that had fallen down. It really gives you an idea of how big these trees are. 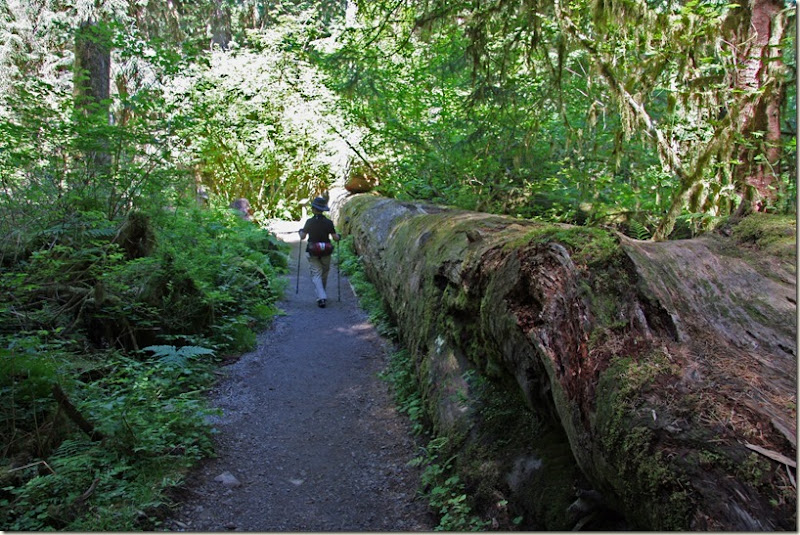 The water in the stream was amazingly clear. 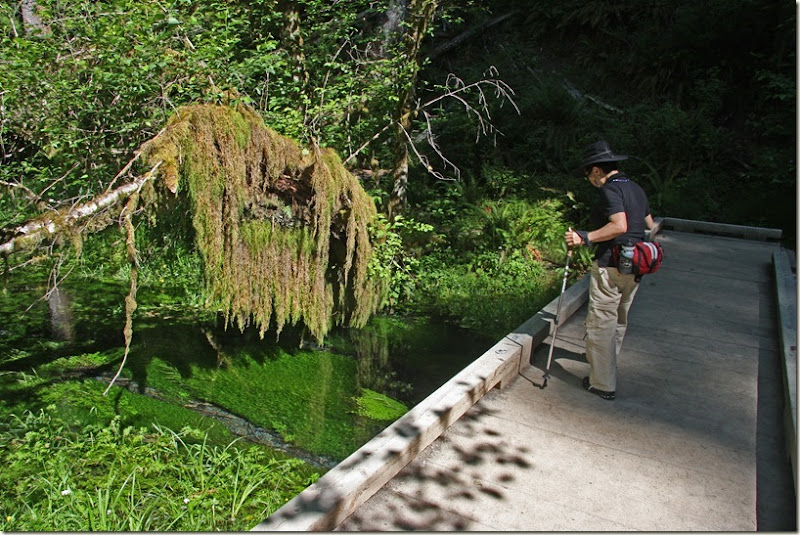 On the way to the rain forest we passed part of the national park that is right on the ocean. On the way back we stopped at some of the beaches. They had very unique names, Beach 1 thru Beach 5 and then Ruby Beach.

The ranger told us that we should stop at Beach 4 because it had some interesting tide pools and low tide was only an hour ago.

The bridge to the beach was quite unusual. It was partly made from driftwood. 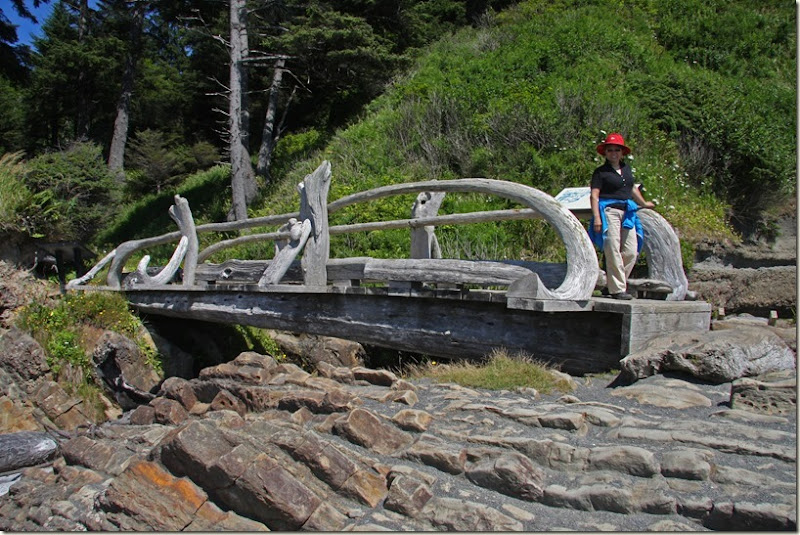 We walked down to check out the rocks on the point. 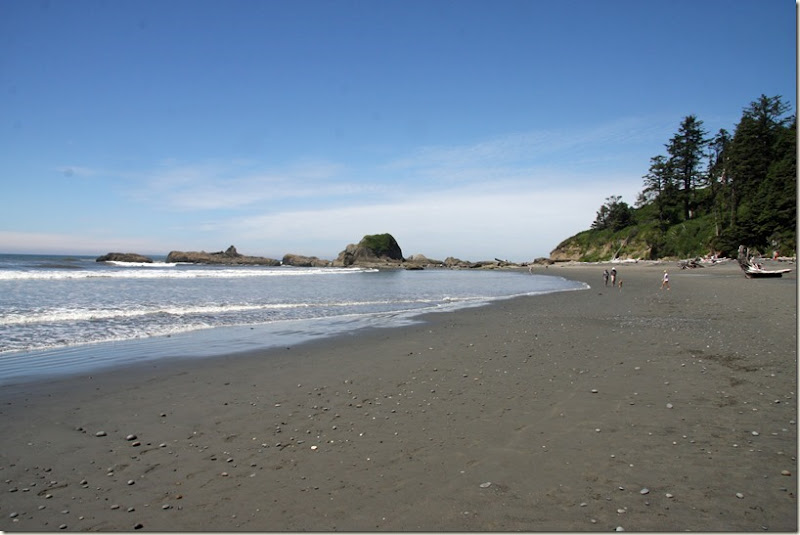 This is the first beach we have been to that was even a little busy. There were actually other people. 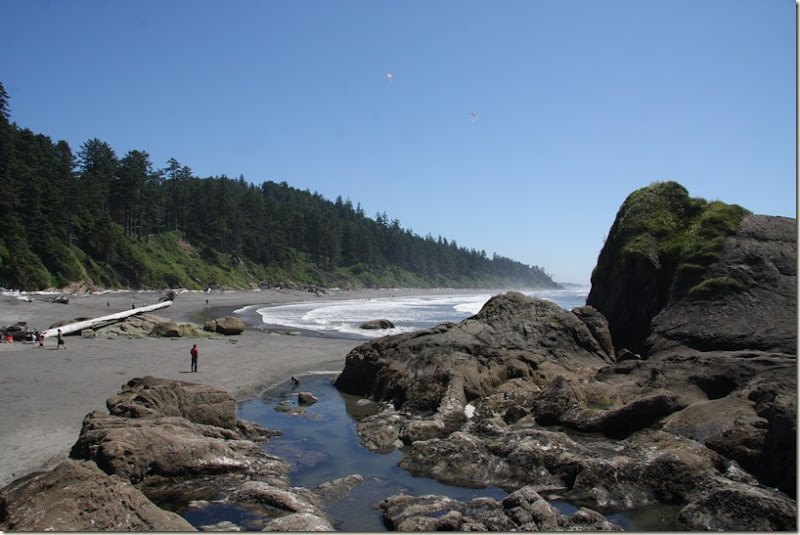 We climbed on some rocks to look at the pools filled with sea stars and anemone. 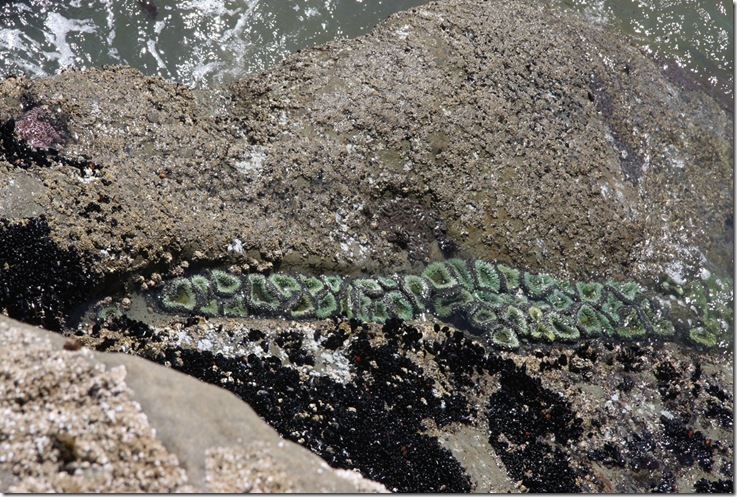 Then we just sat and watched the waves crash in as we always like to do. 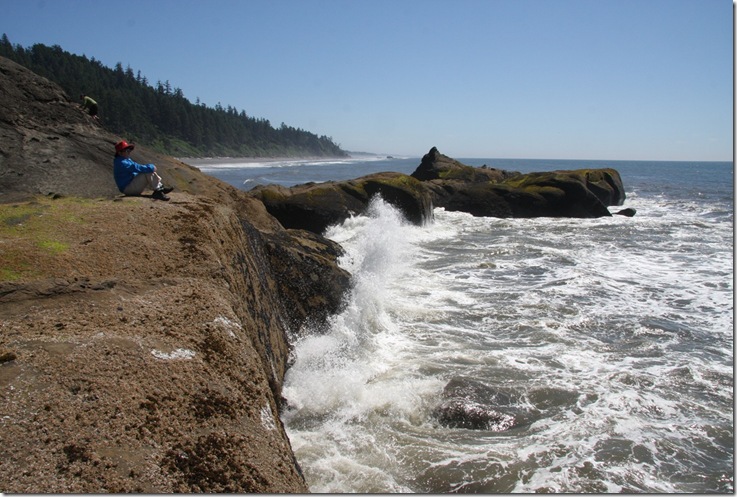 We saw some more sea loins and for the first time some porpoises were feeding out in front of us. I was not fast enough for pictures. 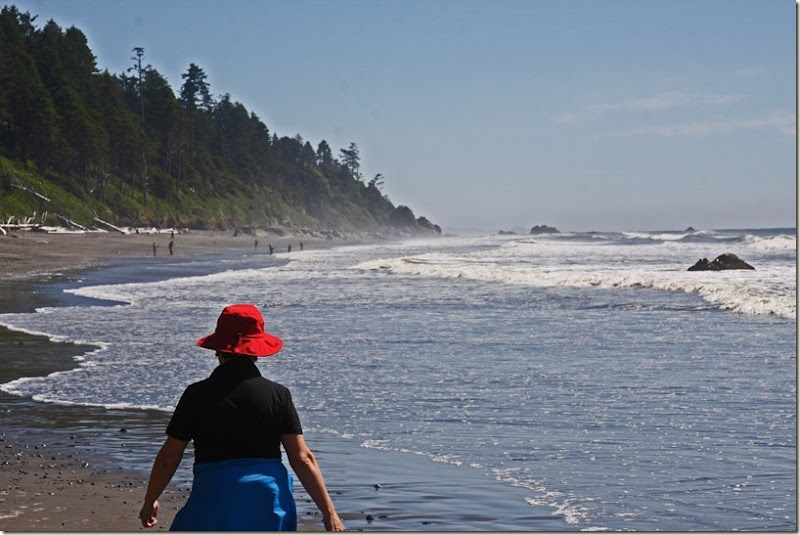 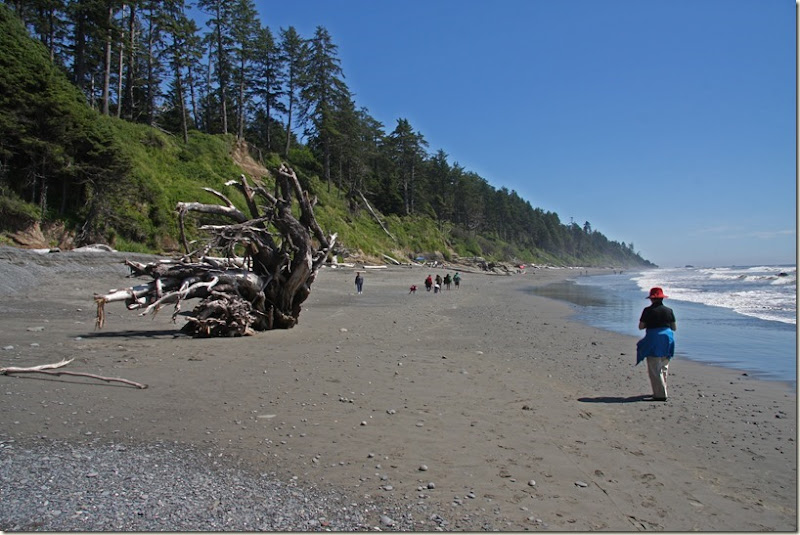 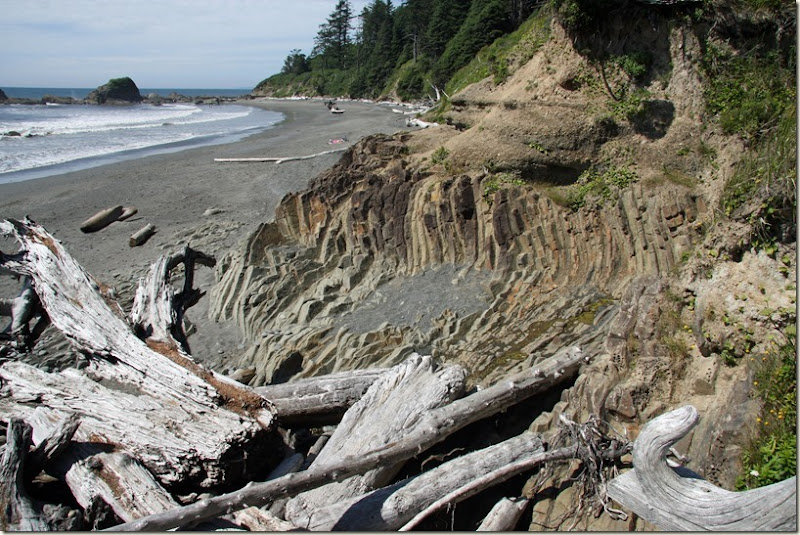 Finally it was off to Ruby Beach which the ranger said was quite picturesque. It was also busy. The parking lot was full as well as both sides of the quarter mile road in. I am not sure where everyone was from. We are at least 2 hours from any major city and there are not that many campgrounds around. 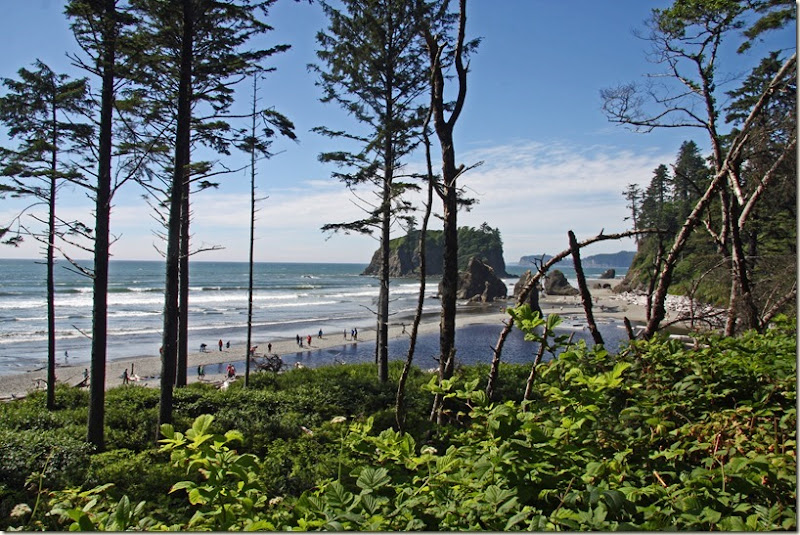 We had a nice walk among the sea stacks. 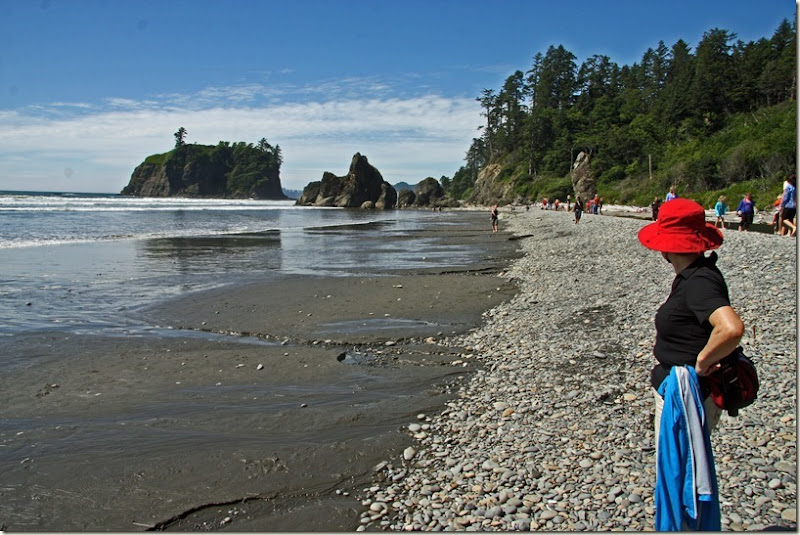 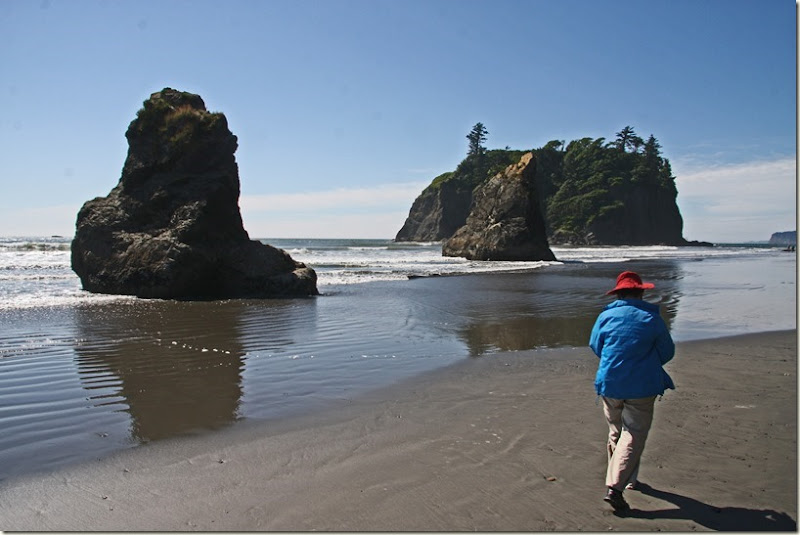 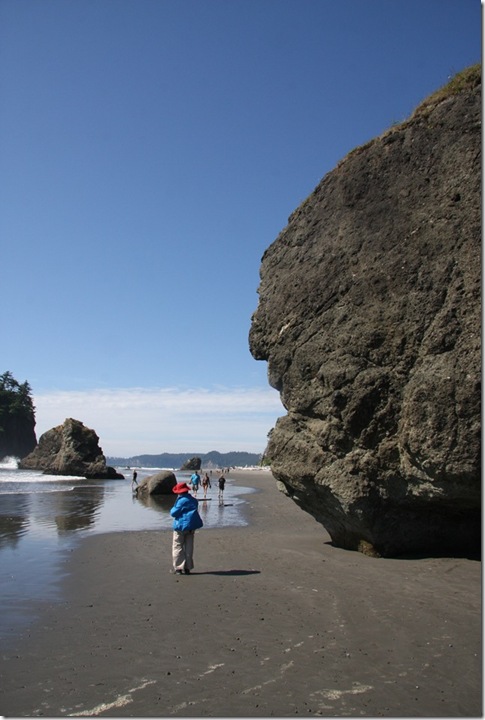 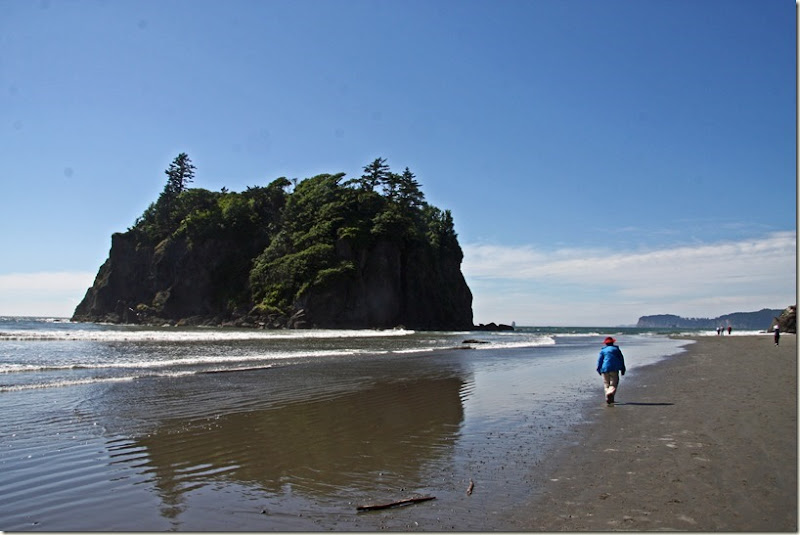 There was a pool from a stream flowing into the ocean. The water was a little bit red. That is the only reason we can come up with for the Ruby name. 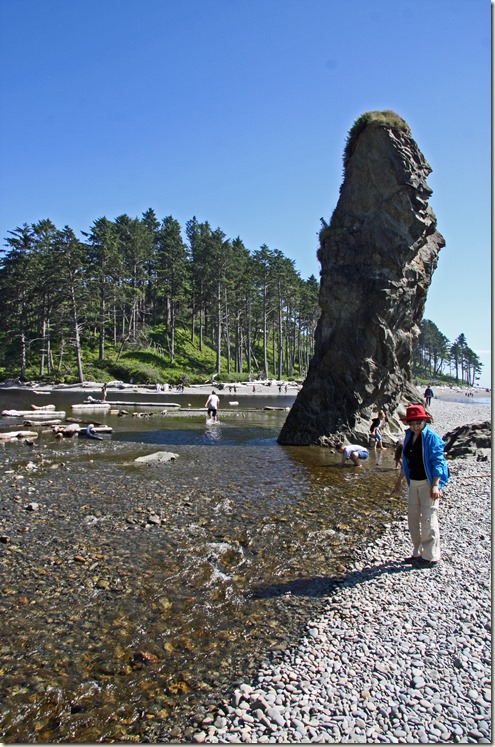 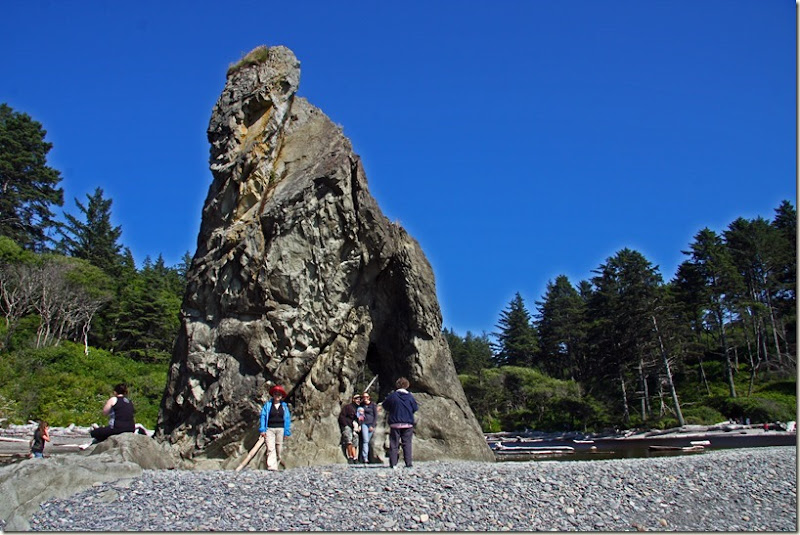 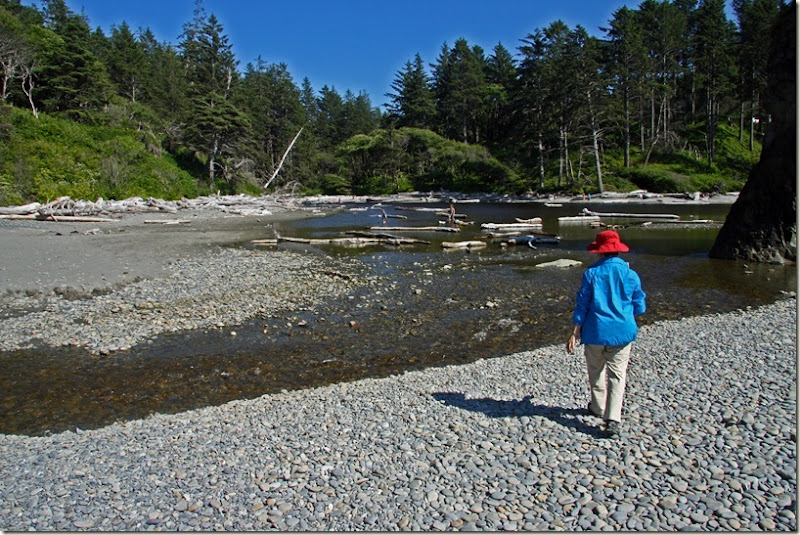