Thursday we rose around 8:00 am, stowed things away, had breakfast and were on the road by 9:00 am on Hwy 2 heading to Moncton still in New Brunswick. Considering that this is the only highway to the Maritimes, there is not much traffic yet. We have no idea what the pace of the population is so who is to say that this is unusual or that traffic will pick up later in the day.

All in all it was a fairly uneventful drive and there was nothing much to say; it was nice but not, extraordinary nor unusual. The highway was hilly with large flat spots between peaks as if a river once flowed through but had since dried up leaving pockets of water here and there. The flat sections went on for long distances and resembled driving through Ontario heading to Sudbury where the routes went through hills.

We had noodles with leftover steak for lunch at a gas station after a fill up where there is a designated resting area for long, large vehicles. As there was nothing recommended along the road we were travelling, Stuart pressed on until we could make it to Moncton to Camper’s City campgrounds. It is not a very large place and many of the spots are inhabited by people who are seasonal residents. Along the outer row, there are numerous structures and decorative features indicating that they are here for the whole summer. Some of the decks attached to the mobile homes are bigger than the RVs. 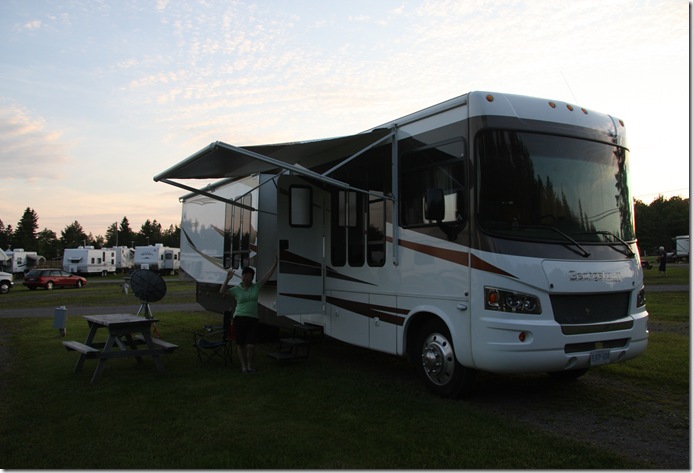