Tuesday we got up around 8:00 am to pack up and leave Ottawa and start our adventure on the road to the far east of Canada. It started out a sunny day here, so it was a cheery last look at the lay of the land before getting onto Rte 417 east from the Ottawa Municipal Campground where the sites were neatly spaced apart by trees and cul de sacs and campers were spread out and it was not too crowded to permit privacy to happen in early June.

We were on the road by 10:00 am after emptying out the tanks and garbage. After a week stay of very conservative water usage, the black water was 2/3 full and the grey was 1/3 full. We found this odd as Stuart had a shower and we washed a sink of dishes every day while we were out most of the days using toilets elsewhere instead of in the RV. More testing and comparison will be needed to verify usage levels before I feel I have a sound reading on water usage. The last time we camped at Bronte for four days, we only filled 1/3 of both tanks, so the black water reading is too high in my estimation.

Stuart did not want to be driving through Montreal during lunch hour but that is exactly what happened. It is bad enough that the roads are so narrow but there always seems to be numerous large freight haulers driving through no matter what hour of the day or night so adding in a few crazy smaller vehicle drivers makes driving horrendous. One moron in a van decided he wanted to take an exit so he came from behind to cut in front of us nearly missing the ramp.

Other than that, it was an uneventful leg of the journey. It rained on and off during this interval. We stayed at the KOA in Quebec City where the sites are long narrow strips 4 deep and row on row of them; totally open field with grass strip where picnic tables and a fire pit were juxtaposed with strips of gravel where the vehicles are to be parked with an occasion young tree growing here and there. I did not feel the trees were placed in strategic spots to provide privacy or shade; but then what do I know about their rationale or the eventual spread of the trees. The first site we were assigned had a young tree on it that kept brushing the side of our RV so Stuart phoned the office to ask for another one, farther up or over a row. The next one we were given happened to cost $5 a day more as it had water dumping facilities and we did not need it for an overnighter, so the camp attendant told us to either pay of move; so we moved. It was around 3:00 pm and there were many sites open still.

Once we checked all encumbrances, the stabilizers were lowered and we settled in; hooking up power, water, turning on the propane to make dinner, setting up the wireless connections to make telephone calls to loved ones through Skype and answer email (as the site had WiFi) and to update the journal in hopes of getting the blog going for our interested relatives and friends. 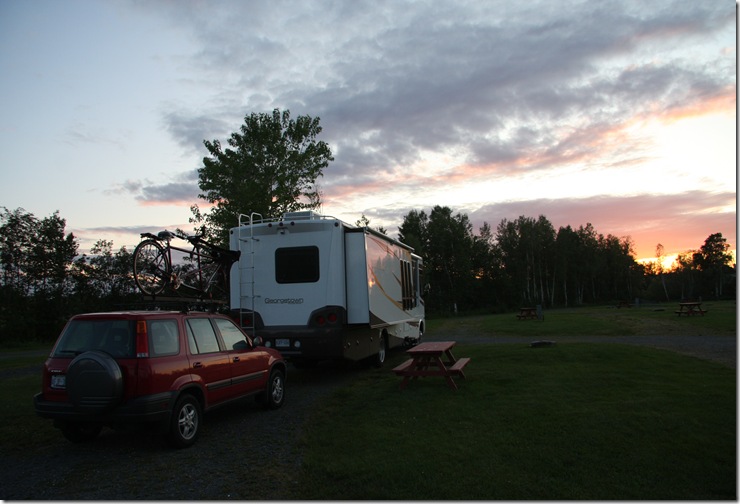