Today is sunny and beautiful when we left for Terra Nova Provincial Park, driving along Hwy 340 south to pick up Hwy 331 and then 330 to Gander to catch the TCH. Unfortunately once we were too far down it, we found that 331 was ripped up and only gravel was laid so it was really dusty and bumpy for the RV and CRV for 16 kms. Good thing it was Saturday and the maintenance crew were off, so there was no hold ups for the single lane of cars for one way or the other. After the gravel was finished the potholes on the 330 were horrendous which meant we had to drive slowly. Stuart regretted not taking the 340 south which we knew was in good condition and in the end, we would have been there at the same time with less wear and tear on both vehicles.

Other than the slow drive along the poor roads, the trip was uneventful, the scenery boring like driving through Ontario at this time. It is starting to get warmer and it is not due solely to relocating nearly 5 sections on the grid south on the map. We arrived in Terra Nova to a sweltering 320 C which is a shock to our system so soon after leaving chilly St. Anthony 6 days ago.

We changed immediately into lighter clothing which did not help much as the sun was in its glory. At the Visitor Centre, it was crowded with people mulling about trying to escape the heat. Our ice creams were melting so fast, we were drinking them. It was still too hot for us so we changed into swimsuits and went to Sandy Pond Beach for a dip. 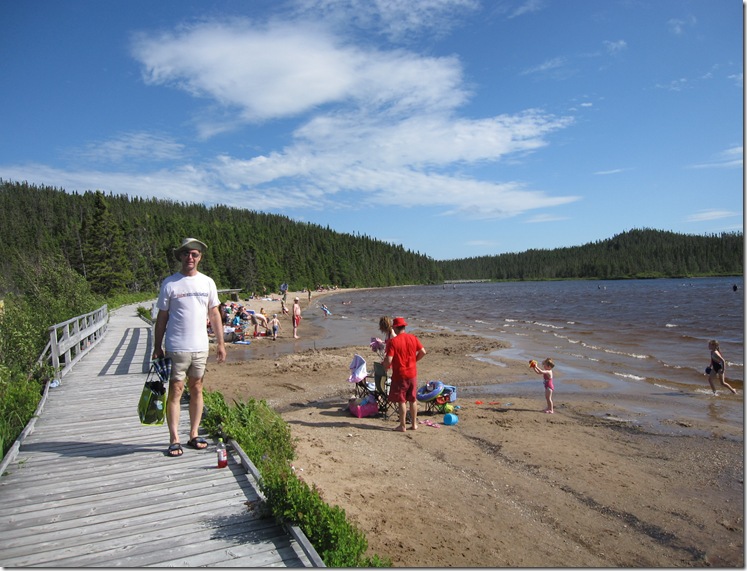 The water was cool; not bad once you got in. It was shallow for a long, long, long way in; better than Algoma as it was at least sandy at the edge and not as rocky farther in but yucky for the feet. The colour of the water is very brownish though clear; not a white clear. We sat in the water and cooled off. It was refreshing. The wind was blowing constantly forming small waves but occasionally a few larger waves formed. A storm front might be moving in, as the wind got stronger and stronger forming larger and more waves.